Teannaway- just off the path

This trip was nothing special but was so perfect and relaxing I need to share it. Jtack and I showed up in separate vehicles at the Esmerelda trail-head on Thursday evening and had a wonderful sit-about around a fire ring with lawn chairs and beers. We intended to sleep in, but the sun woke us up, each in our own pickup bed, earlier than necessary. Once we stepped onto the trail, we didn't see another person for over 24 hours. We walked up to Long's Pass, a trail that has a bad reputation but is really quite pleasant, and then turned south to follow the ridge that separates the Esmerelda drainage from the Turnpike drainage. This ridge is well traveled for a quarter mile, and then evidence of people passage stops. We walked about 1.5 miles south along this ridge until we found a fantastic camp spot within spitting distance of the two remaining snow-filled paths into the Turnpike Creek valley. 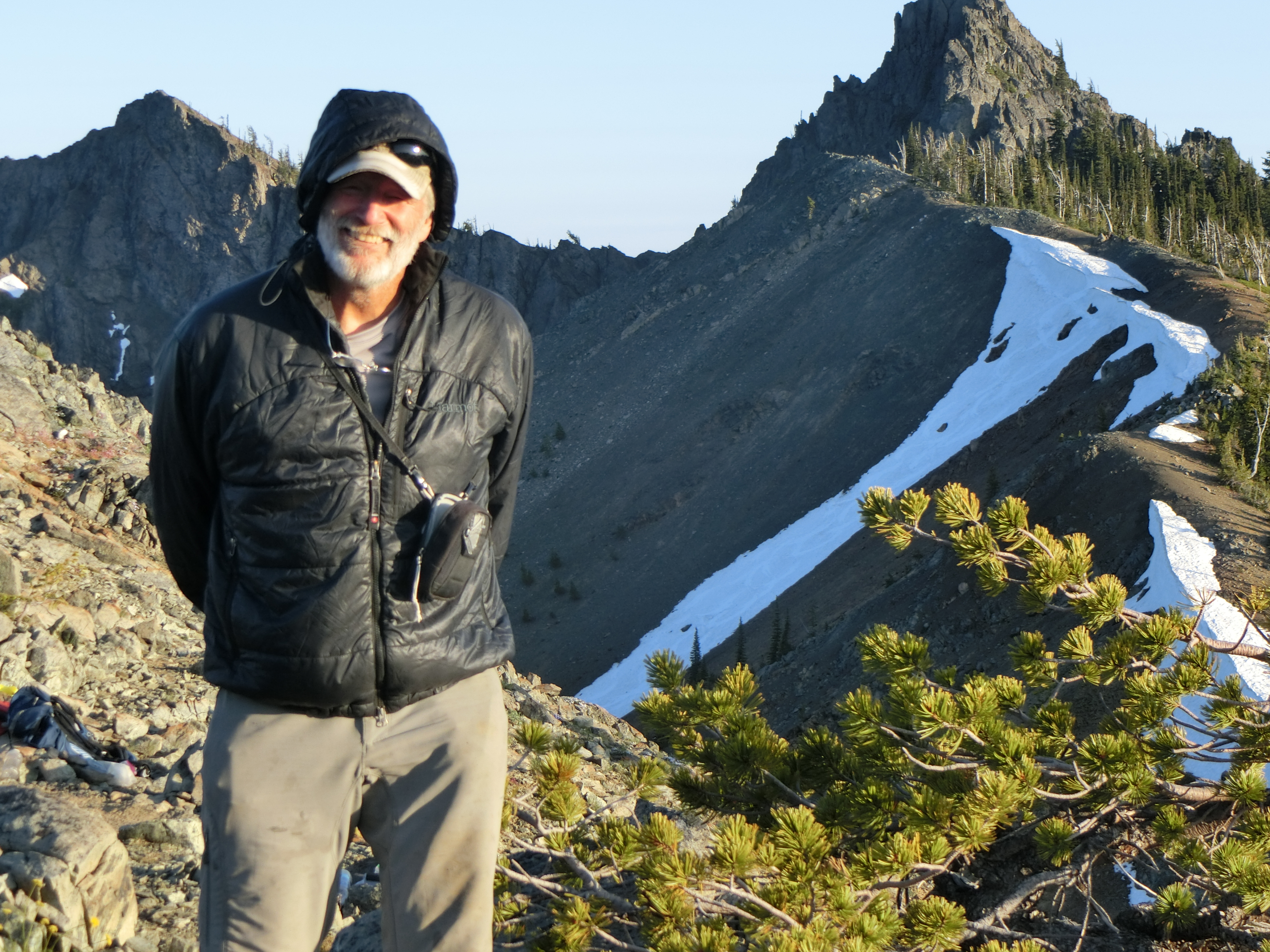 We had viewed this drainage in May when we skied what I now know is called the "wall slot", and we were hopeful that there would still be snow.

Iron Peak/Turnpike Basin in late May: 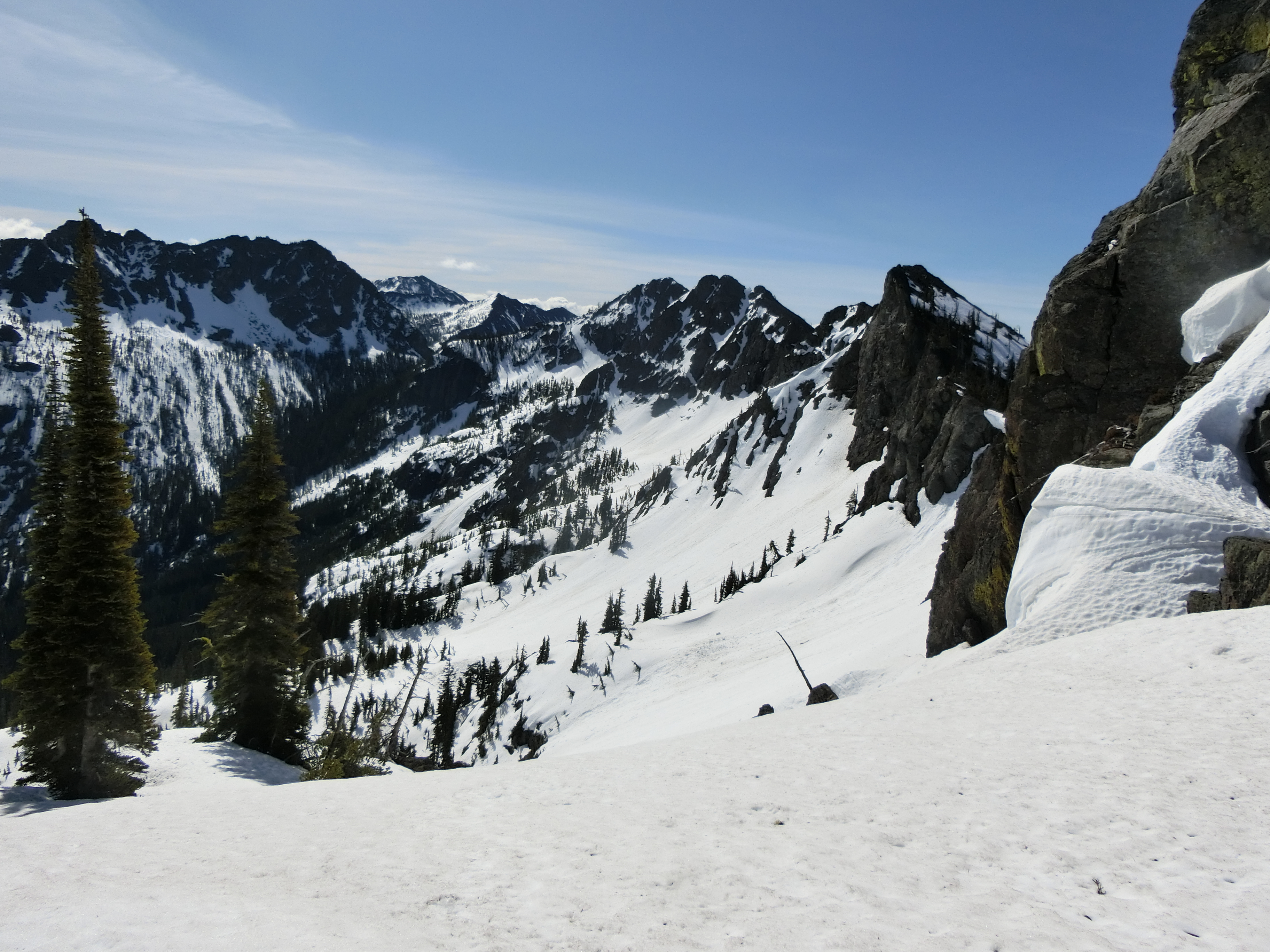 We were sort of right. On our first run, we got a legitimate 500 feet of (not exaggerating) perfect corn, followed by a pretty gimmicky 400 feet of narrow (NARROW) snow slot and rock and heather skiing. We intended to ski it once, walk across a plateau to a ridge, and climb back to our camp spot, but the skiing was so good we changed plans and booted back up the steep snow to the ridge so we could do it again. 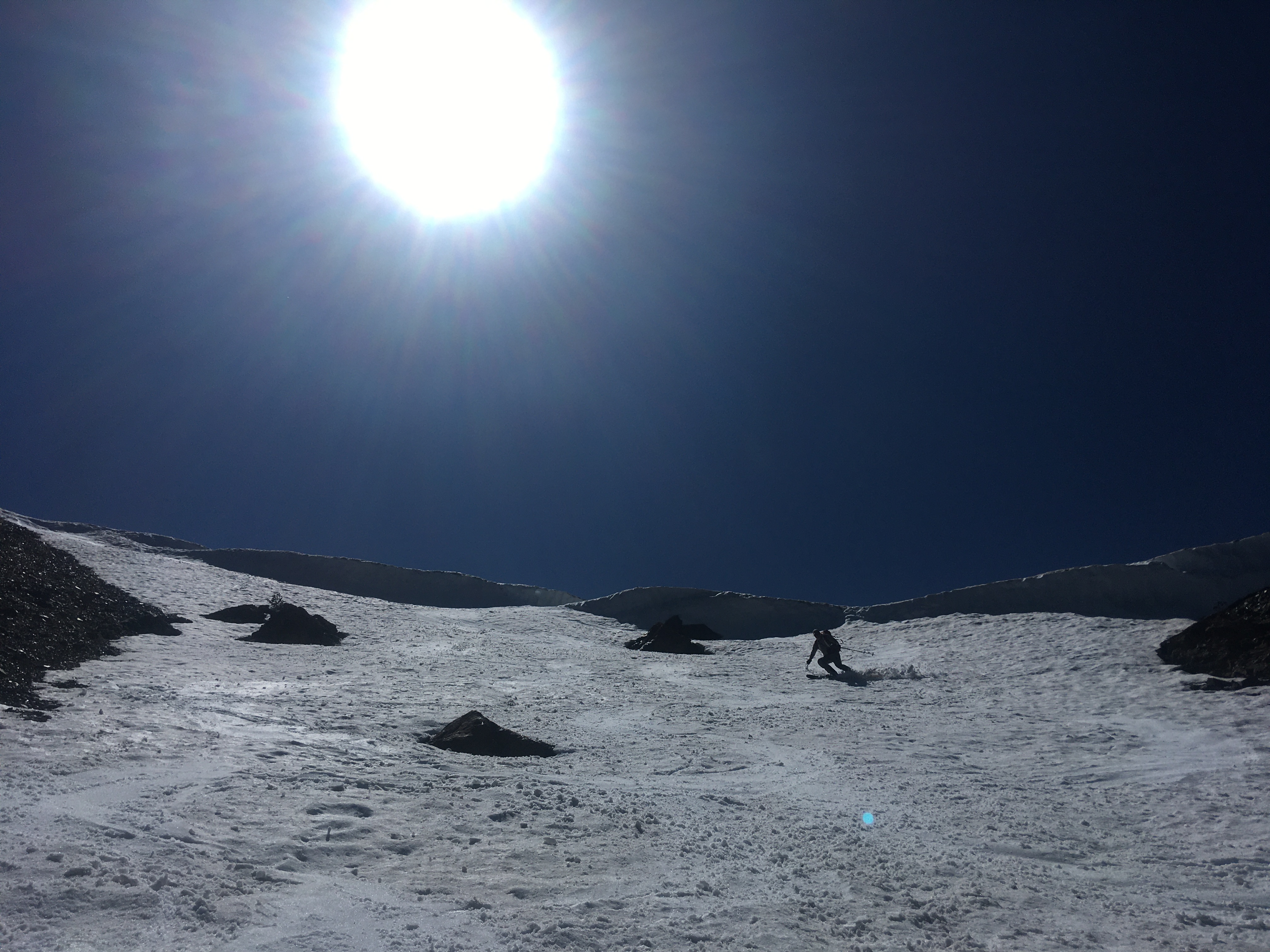 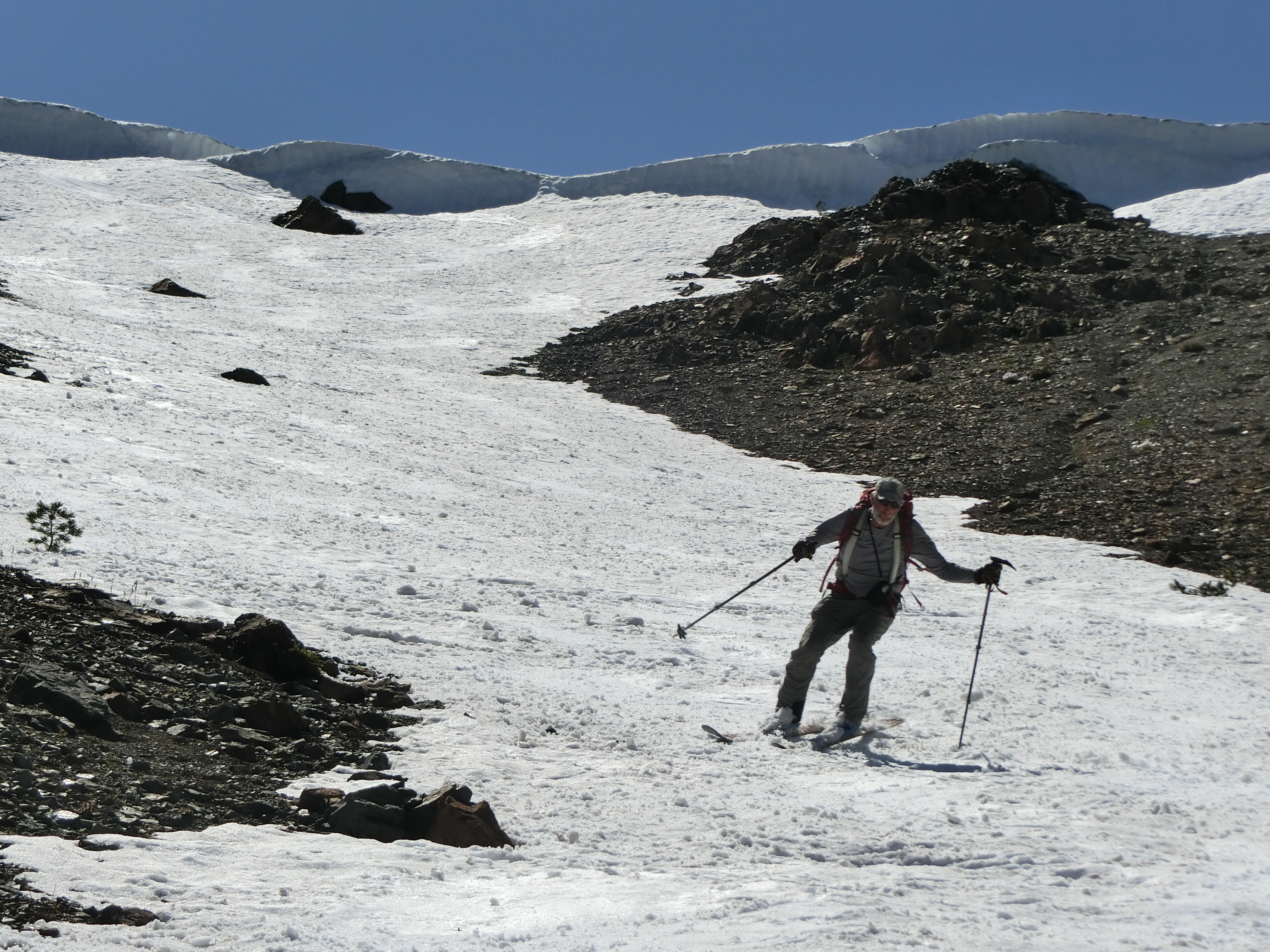 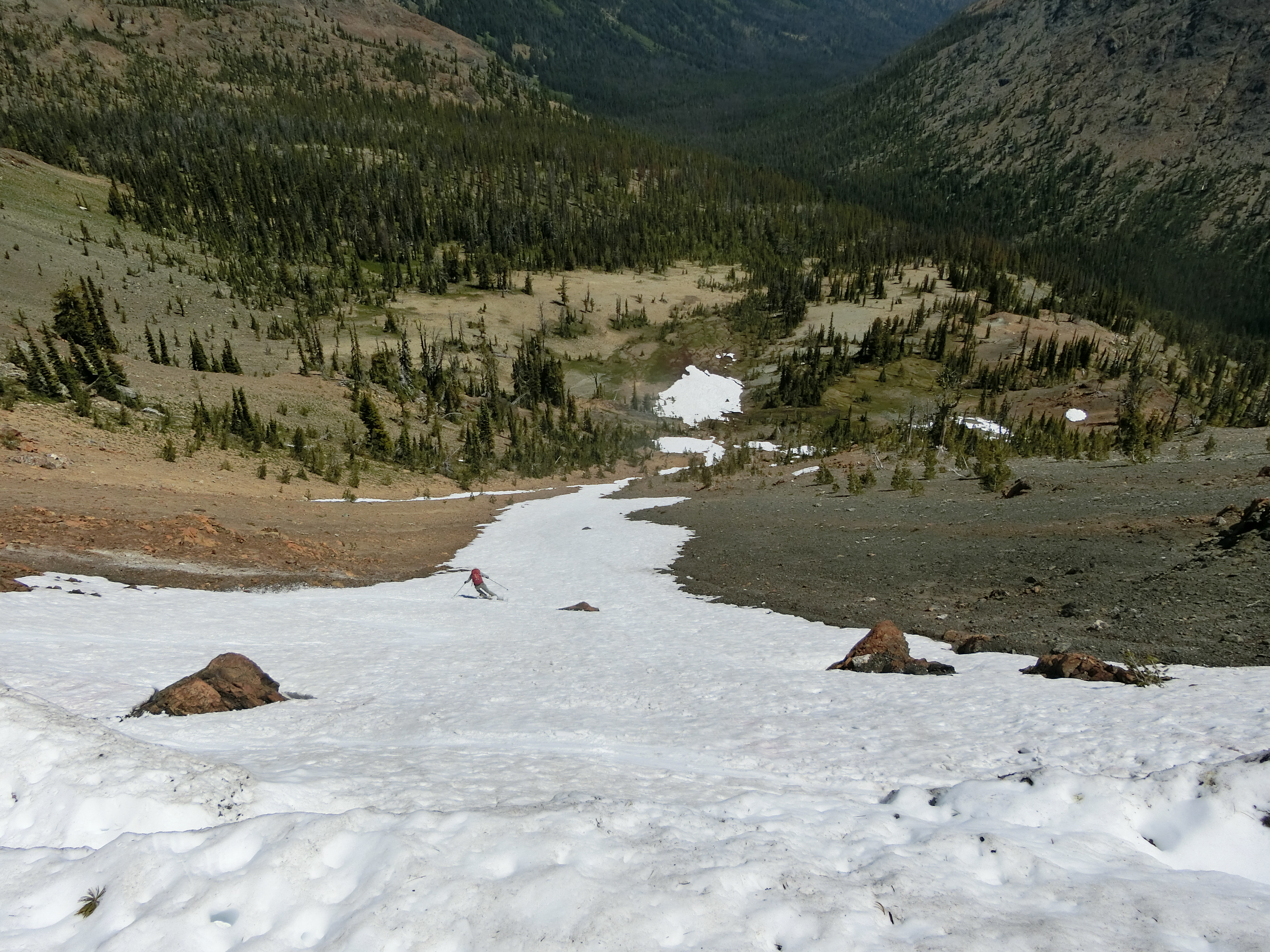 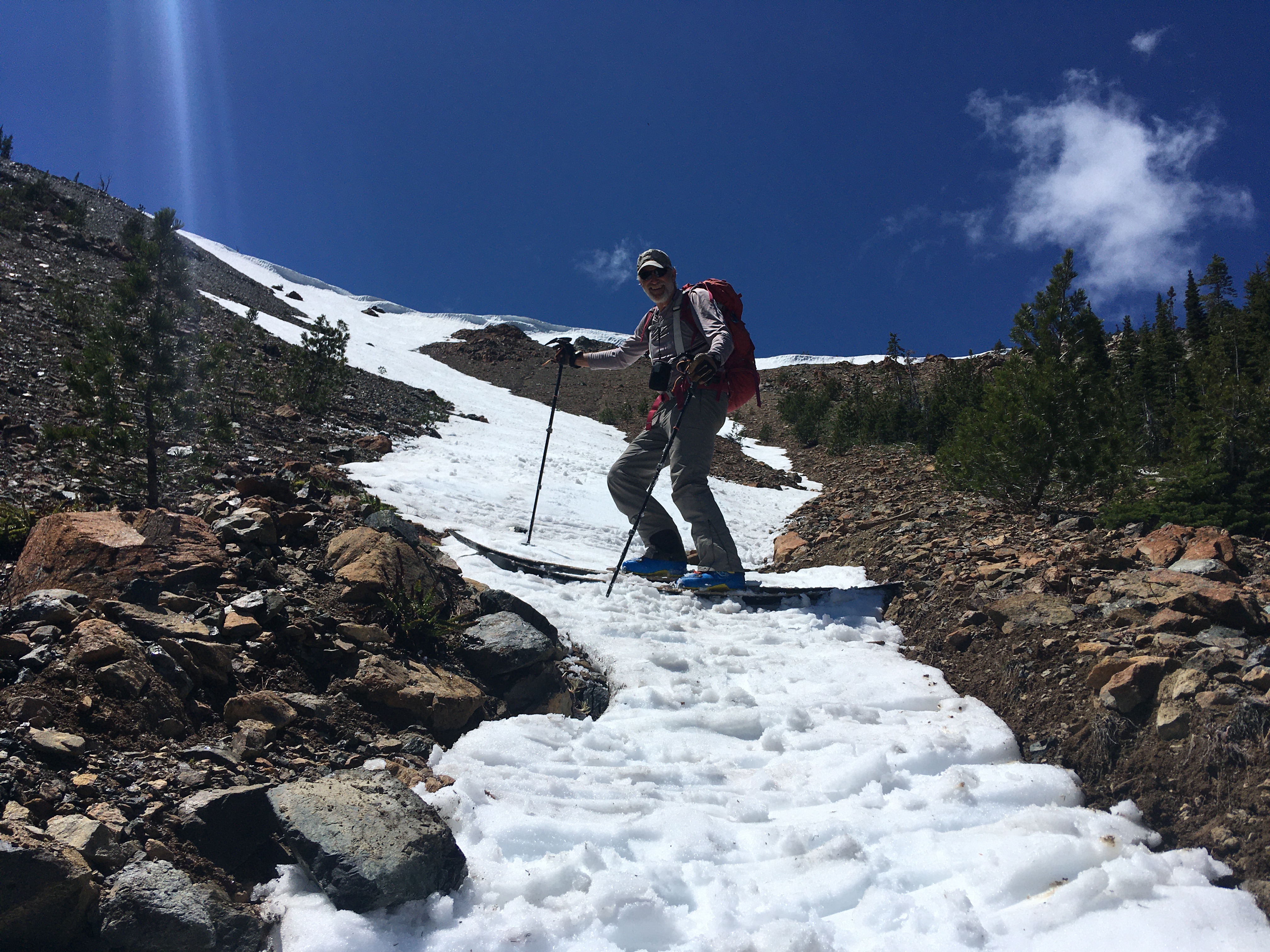 Speaking of steep, we checked the slope incline periodically with our various phone slope measurement apps and both found that most slopes on both sides of this ridge were about 38 degrees. What is special about 38 degrees? Is this the angle of repose, the angle of erosion debris? Anyway, after our second lap on that fantastic 900 foot finger of snow, we switched to sneakers and started walking up what looked like a reasonable scree/small tree slope toward camp. Holy unpleasant uphills! It was a two whippet frenzy to get to the top of this loose pile of rock. The snow route was way safer. Lesson learned.

The ridge south of Long's Pass: 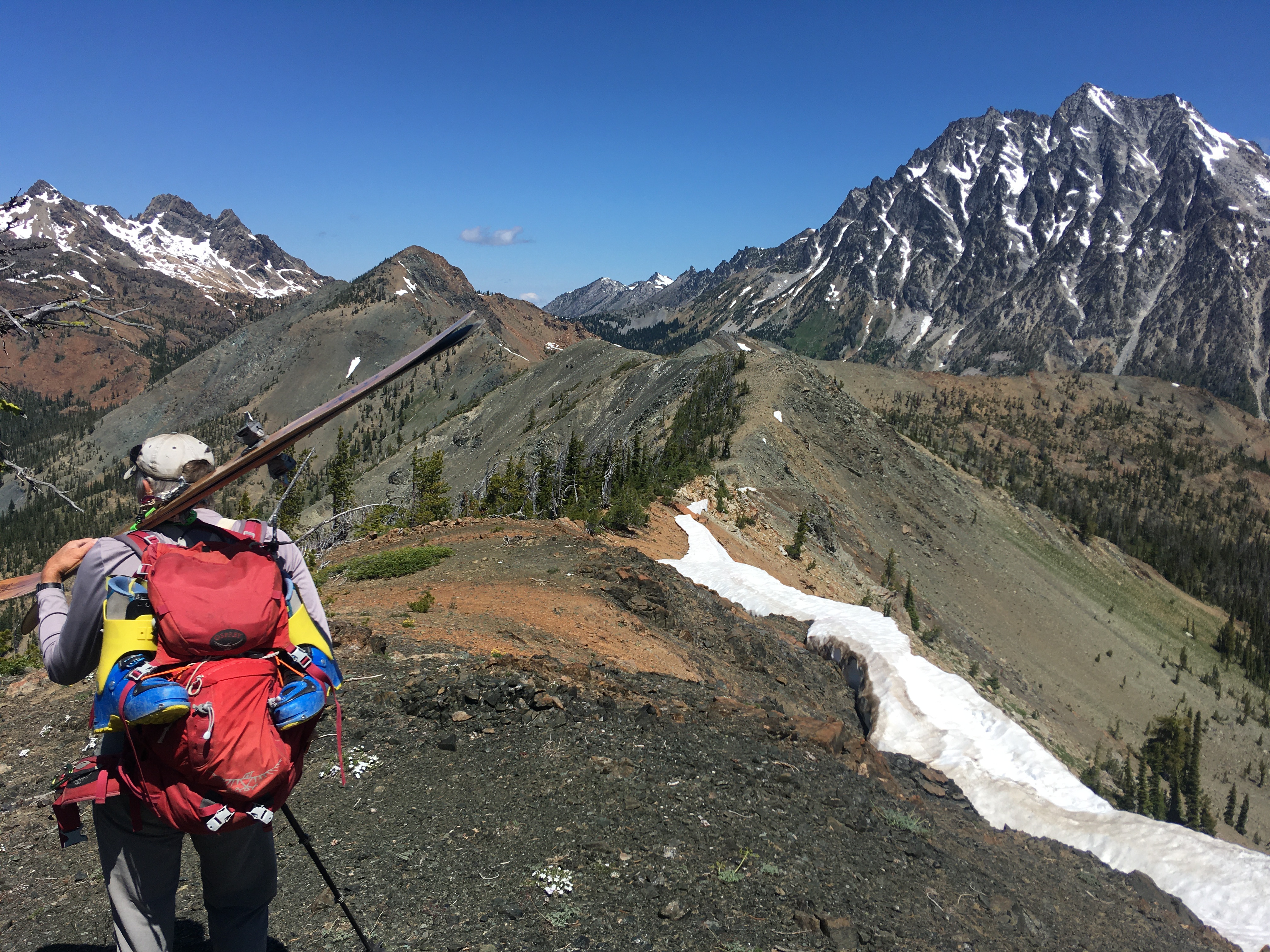 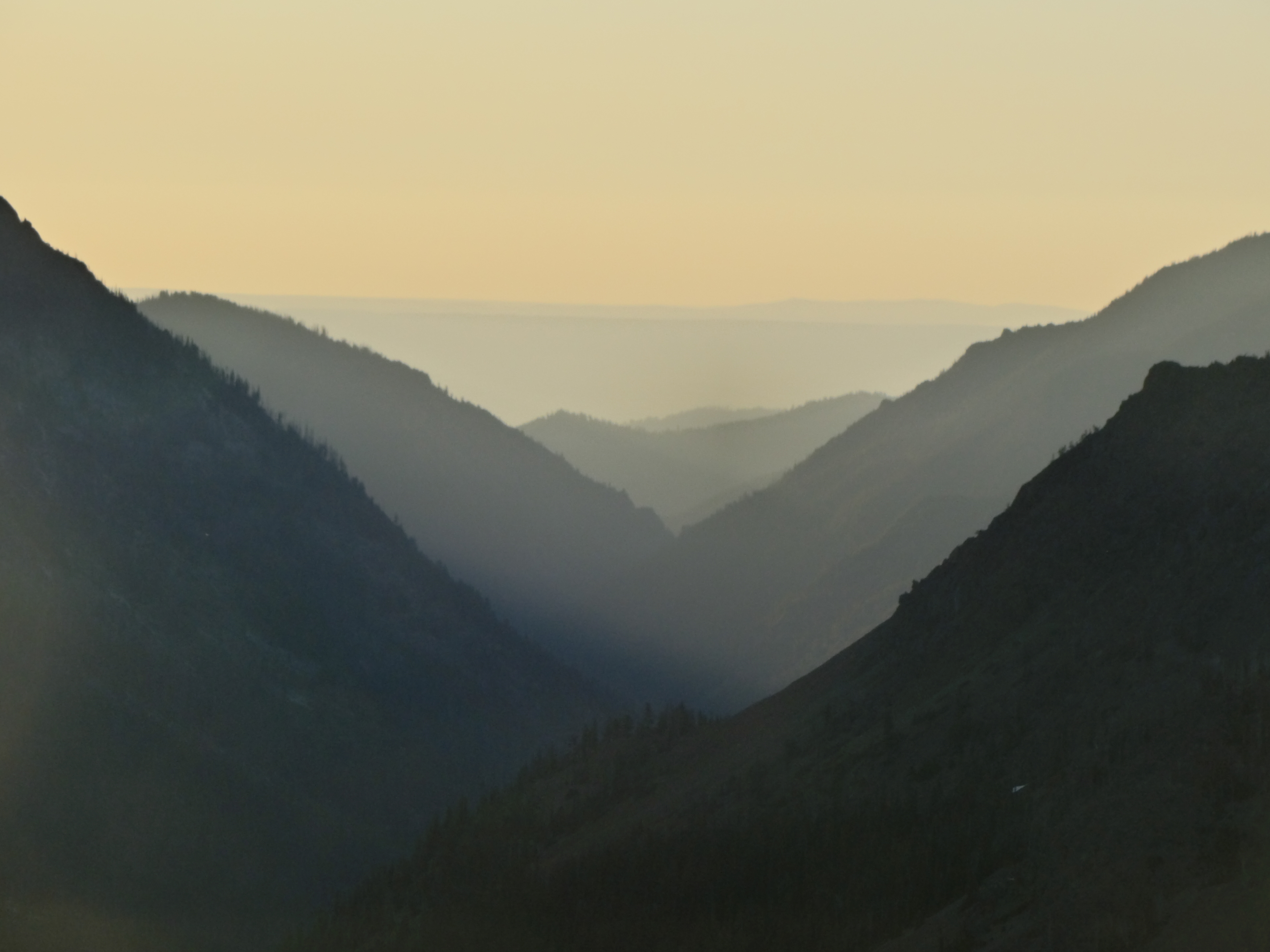 On Saturday, we skied a shorter, almost novelty pitch into the same drainage, but closer to Long's Pass. 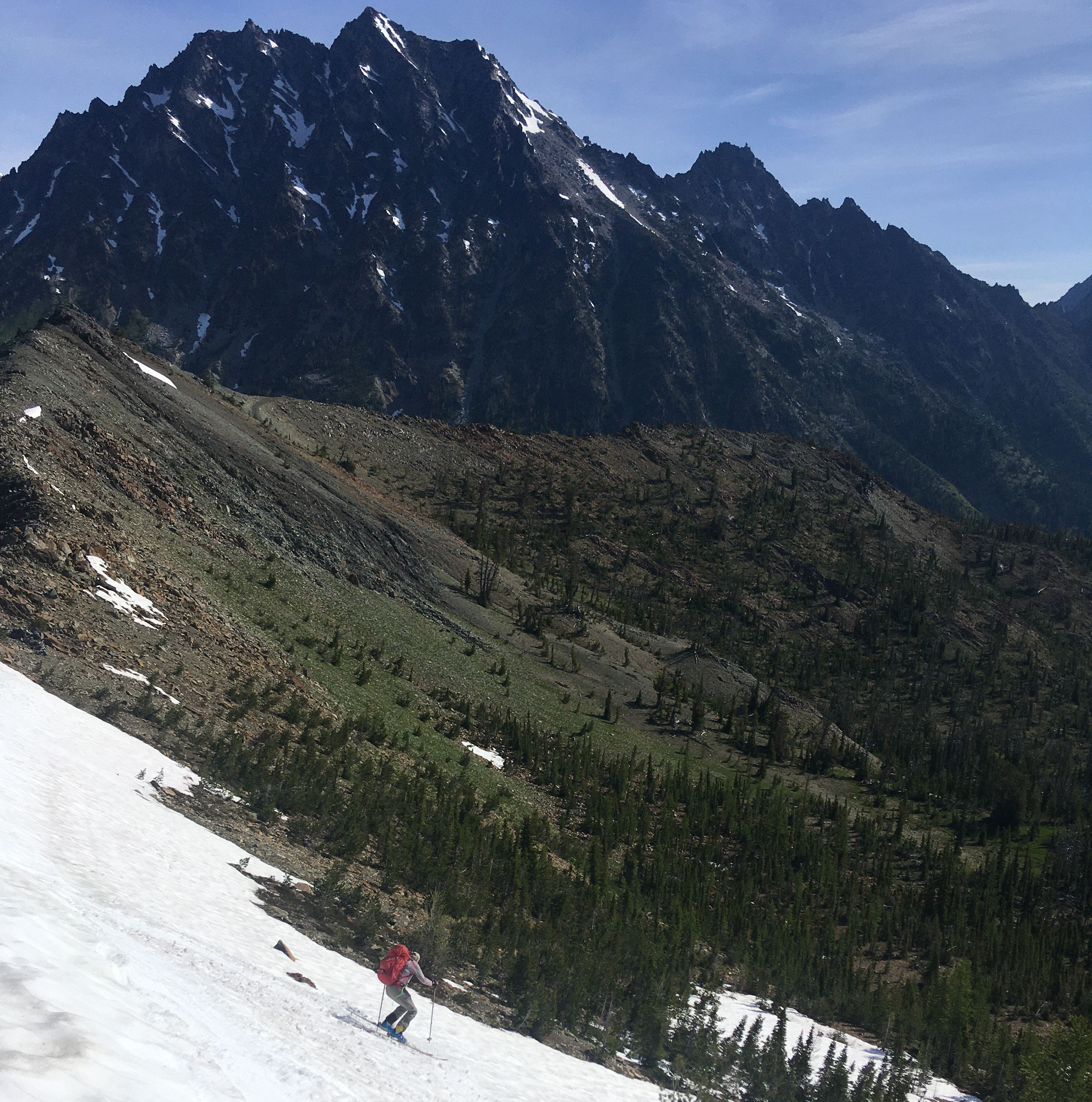 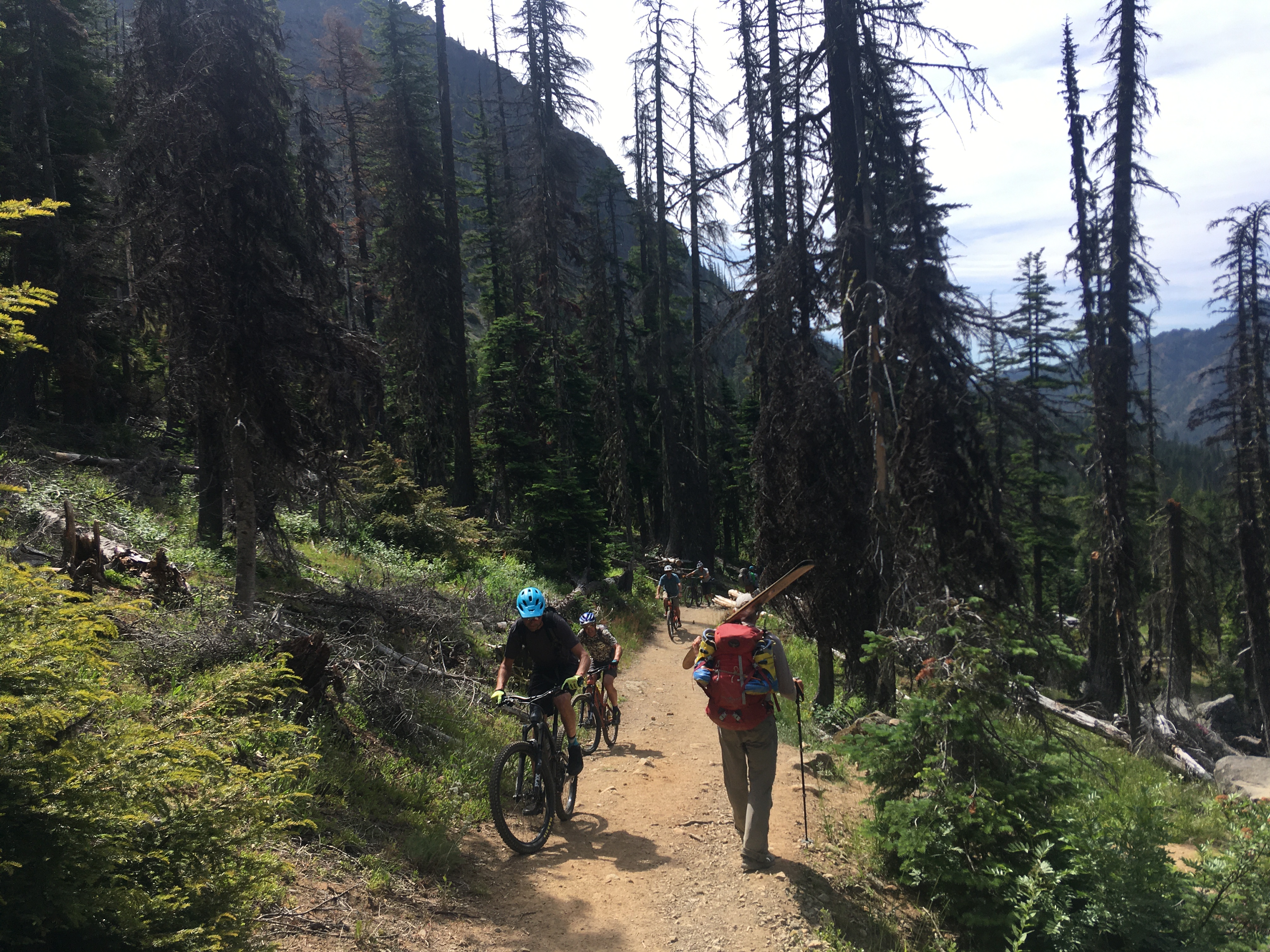 We sat for social hour (for about an hour) in the parking lot  - this was Saturday from 11:00am to noon - and loosely counted 90 people coming and going. On the drive out, I counted 170 vehicles . It was a nuts.

I think this is the first year I've seen overflow parking at the Esmerelda TH, but I've seen it three times this spring. What is going on?

This ski we did was fantastic, as was our camp spot. I think if you want to do similar, you should wait til next spring, as we were a week late for both our lines. It was awesome to be secluded from the crowds so close to the parking lot.

That ridge separating Turnpike and Esmerelda was an unlikely place for flowers and critters, so I was taken by the ground cover. To heal up from the parking mess, here are some nice flower pictures from that ridge: 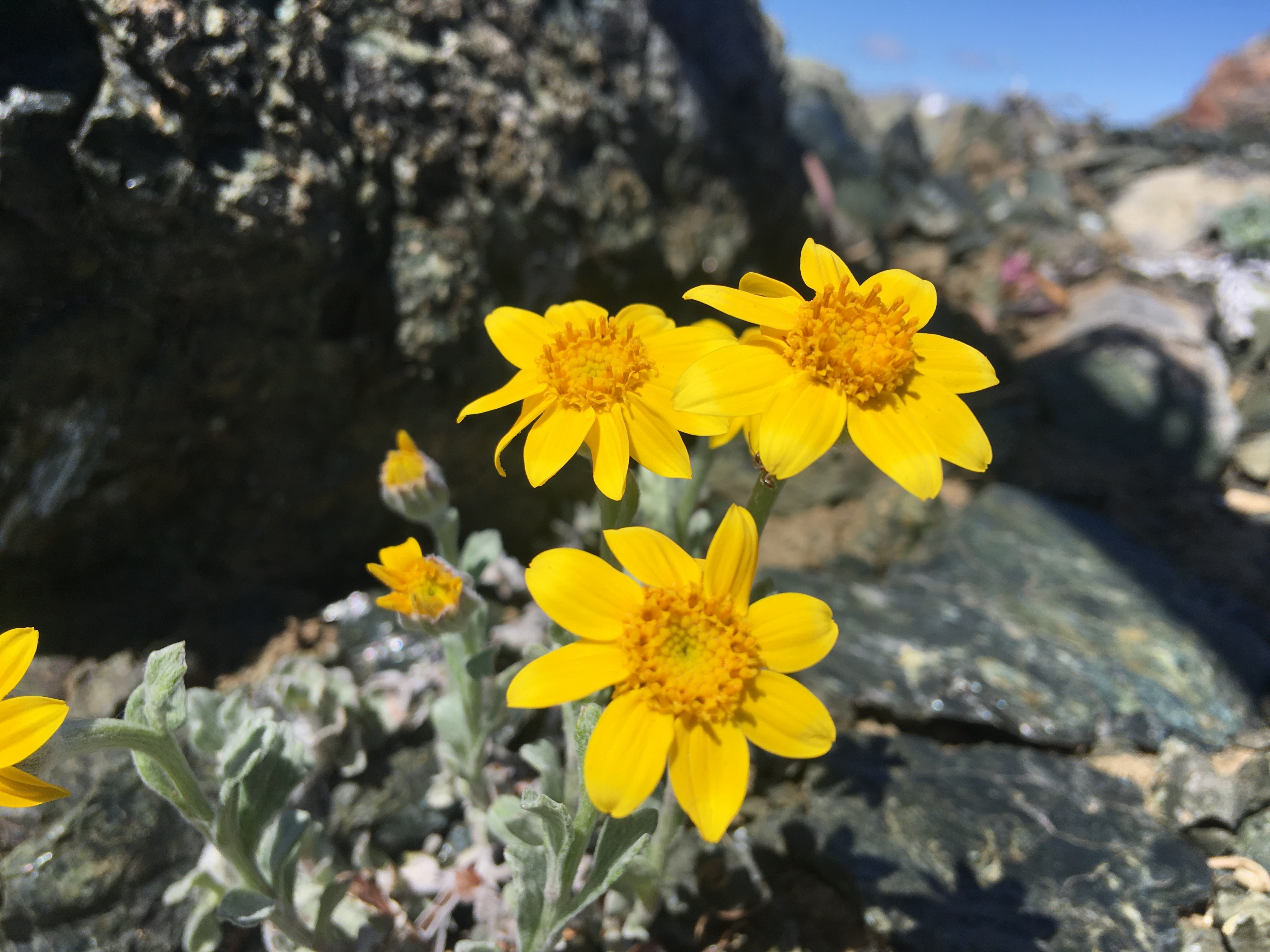 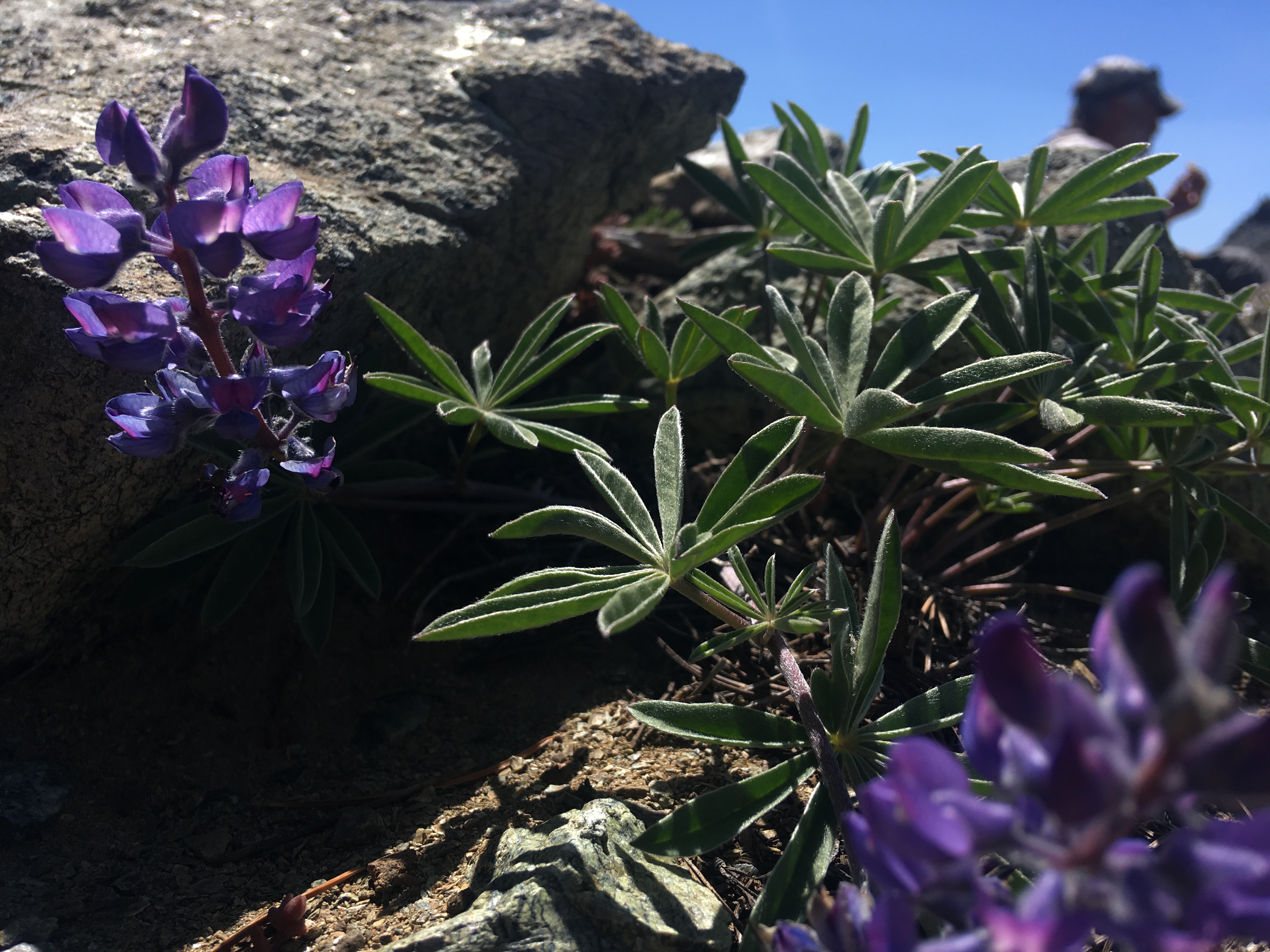 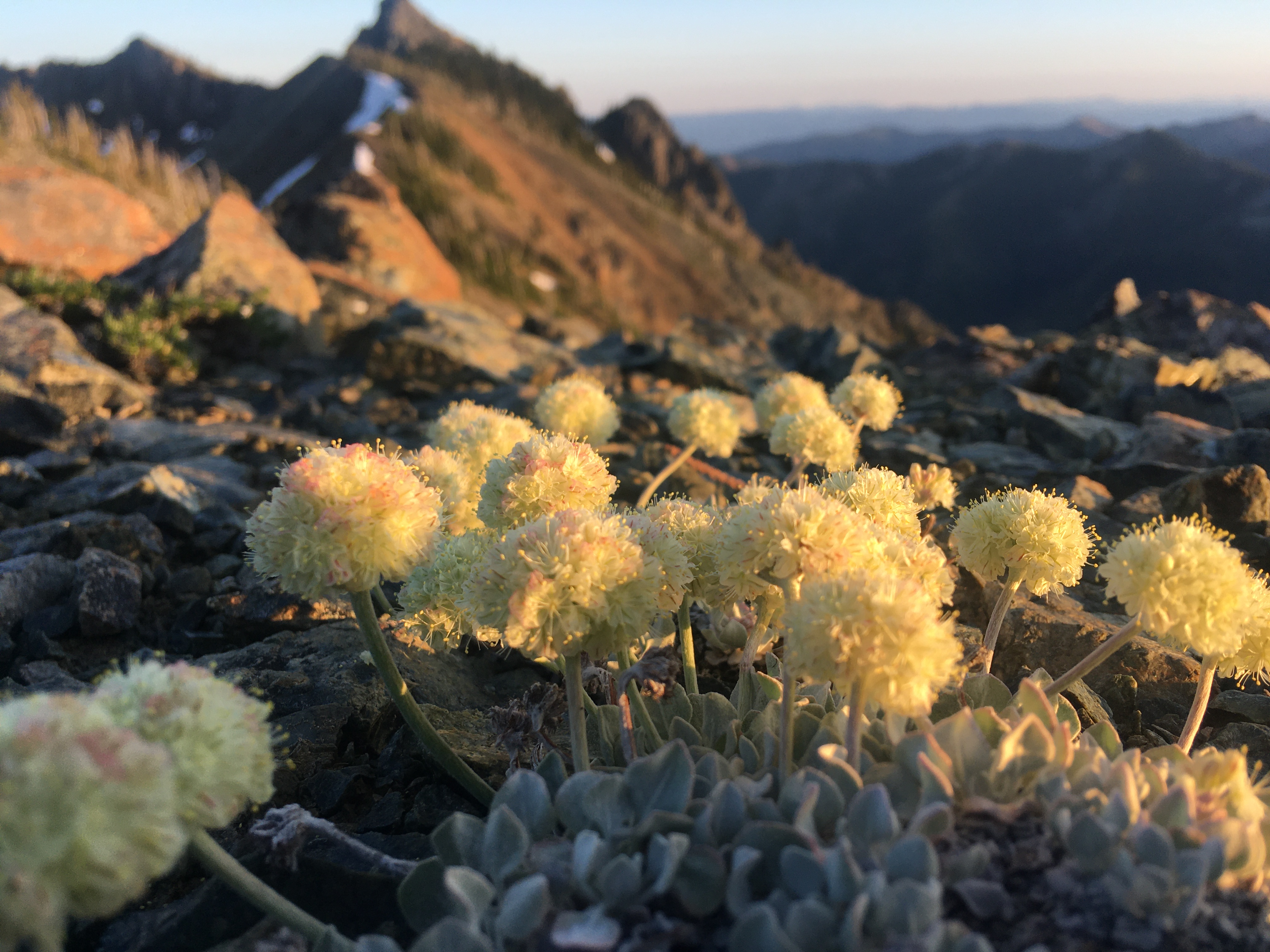 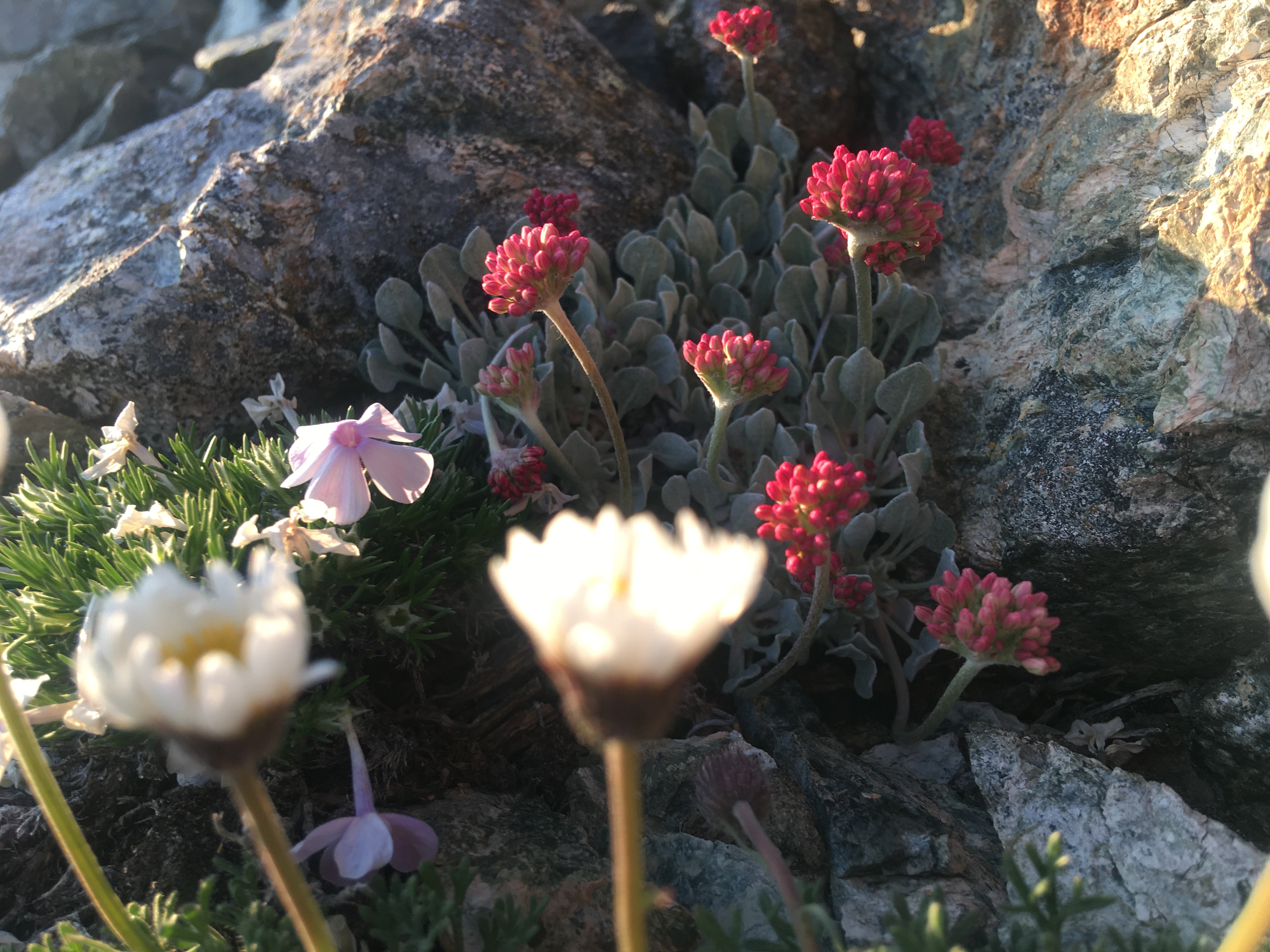 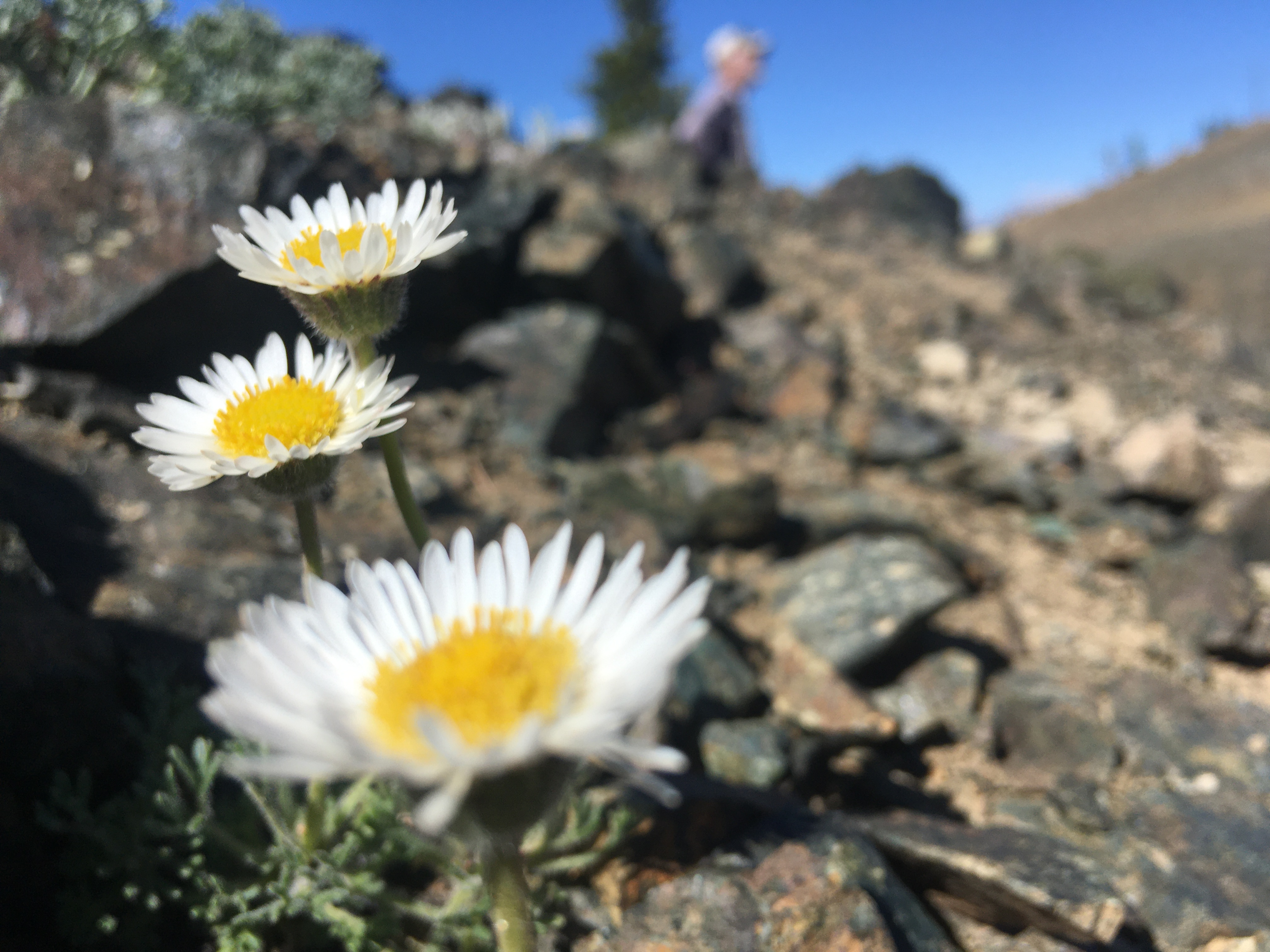 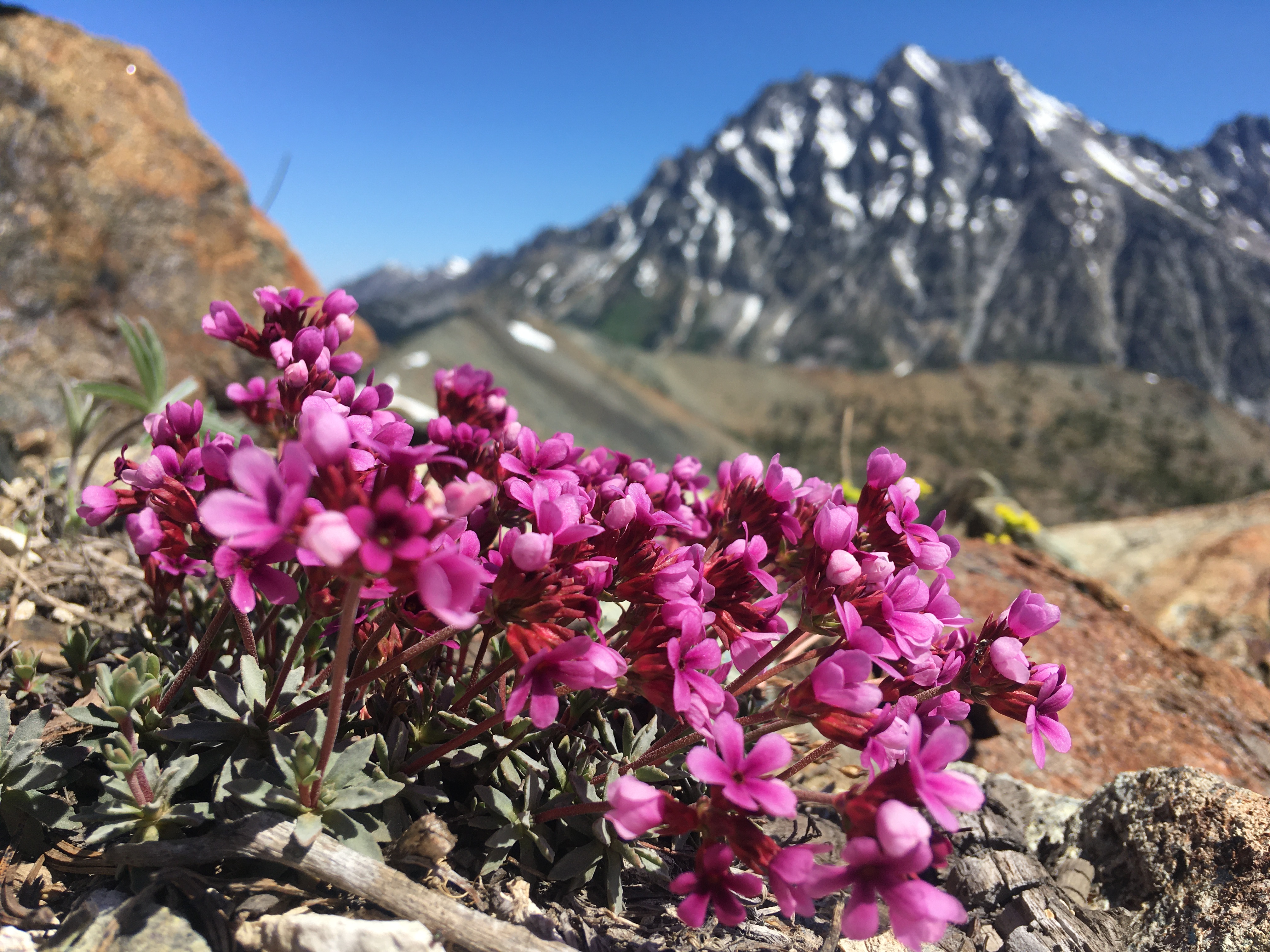 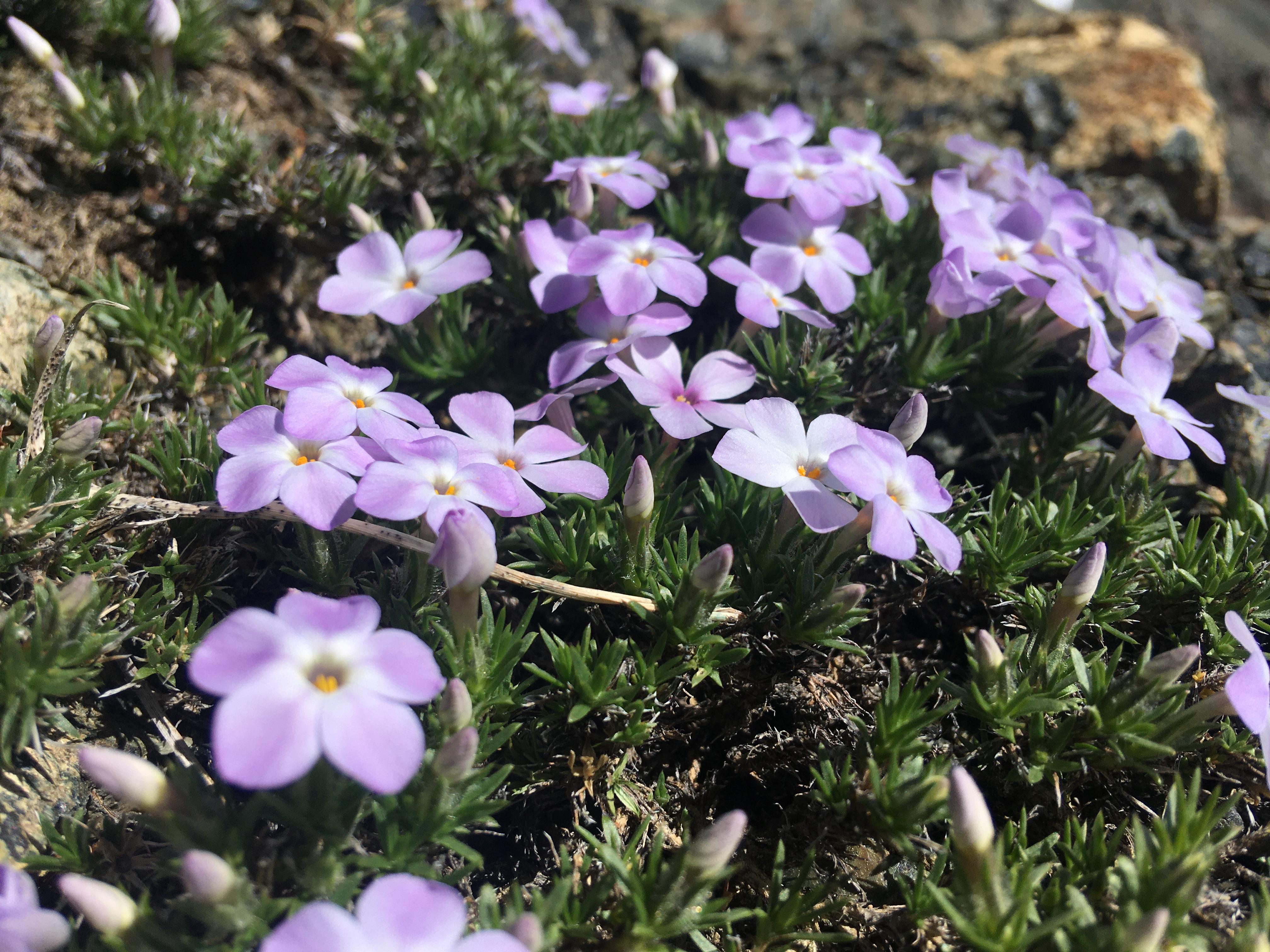 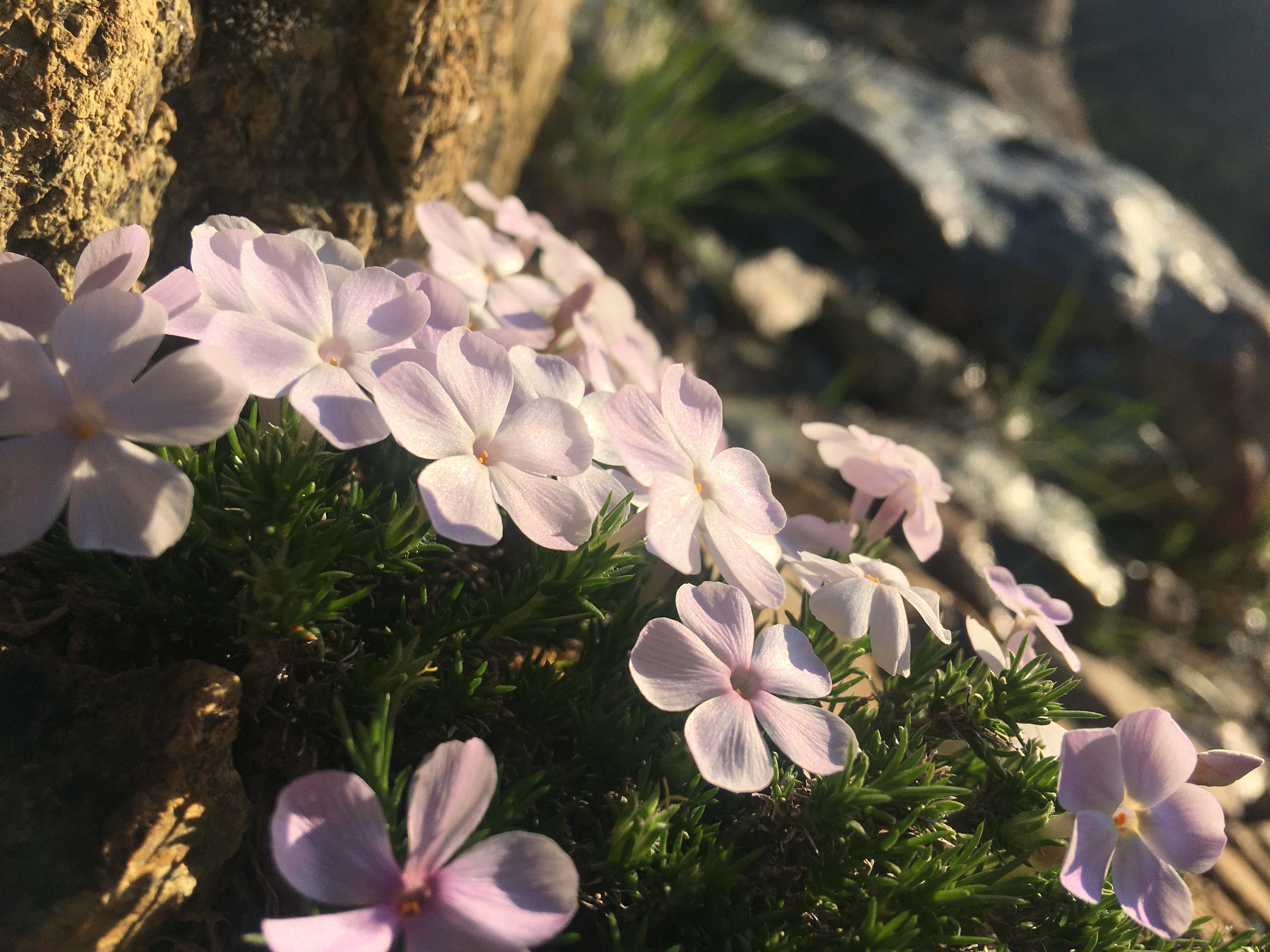 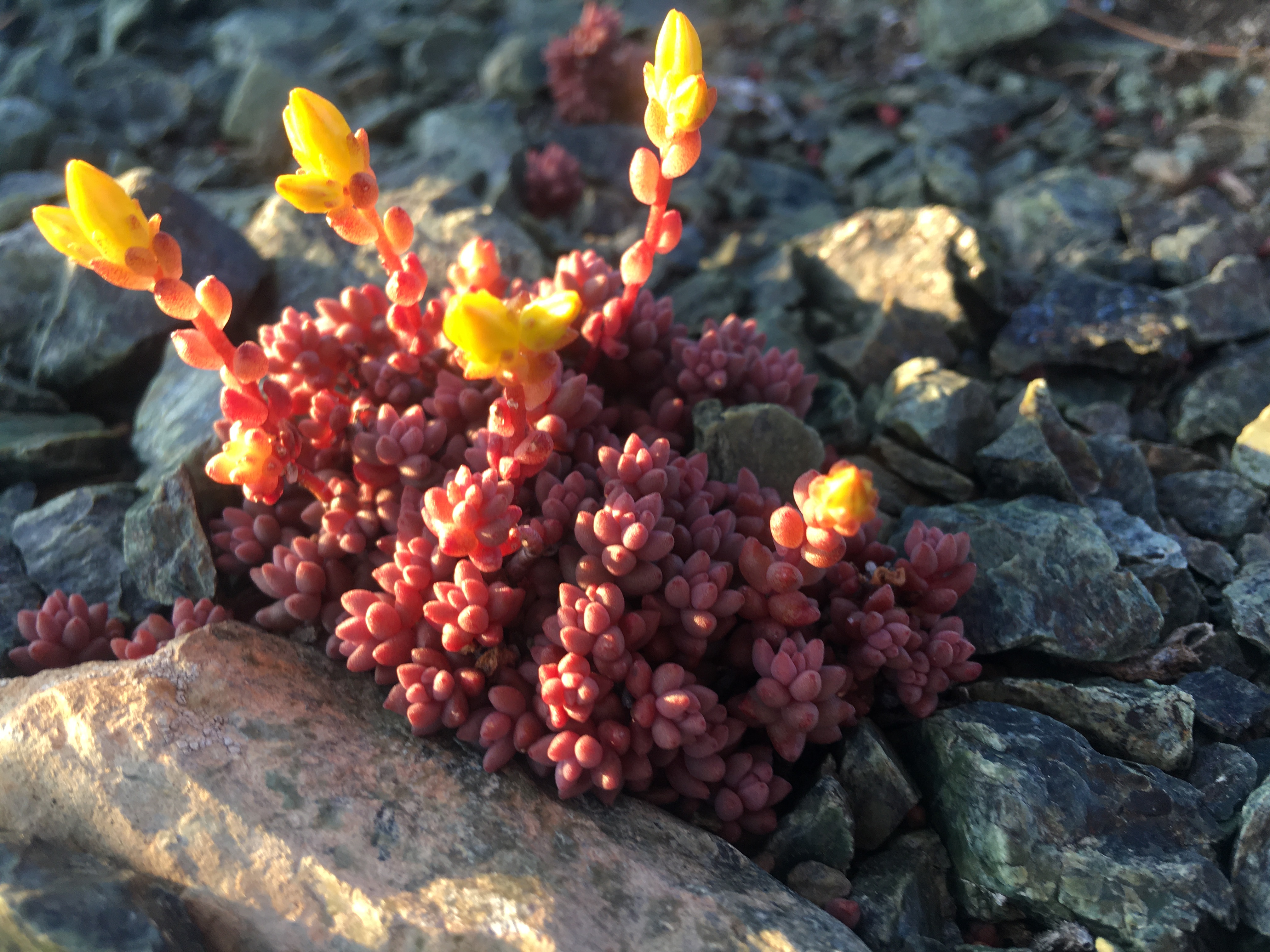 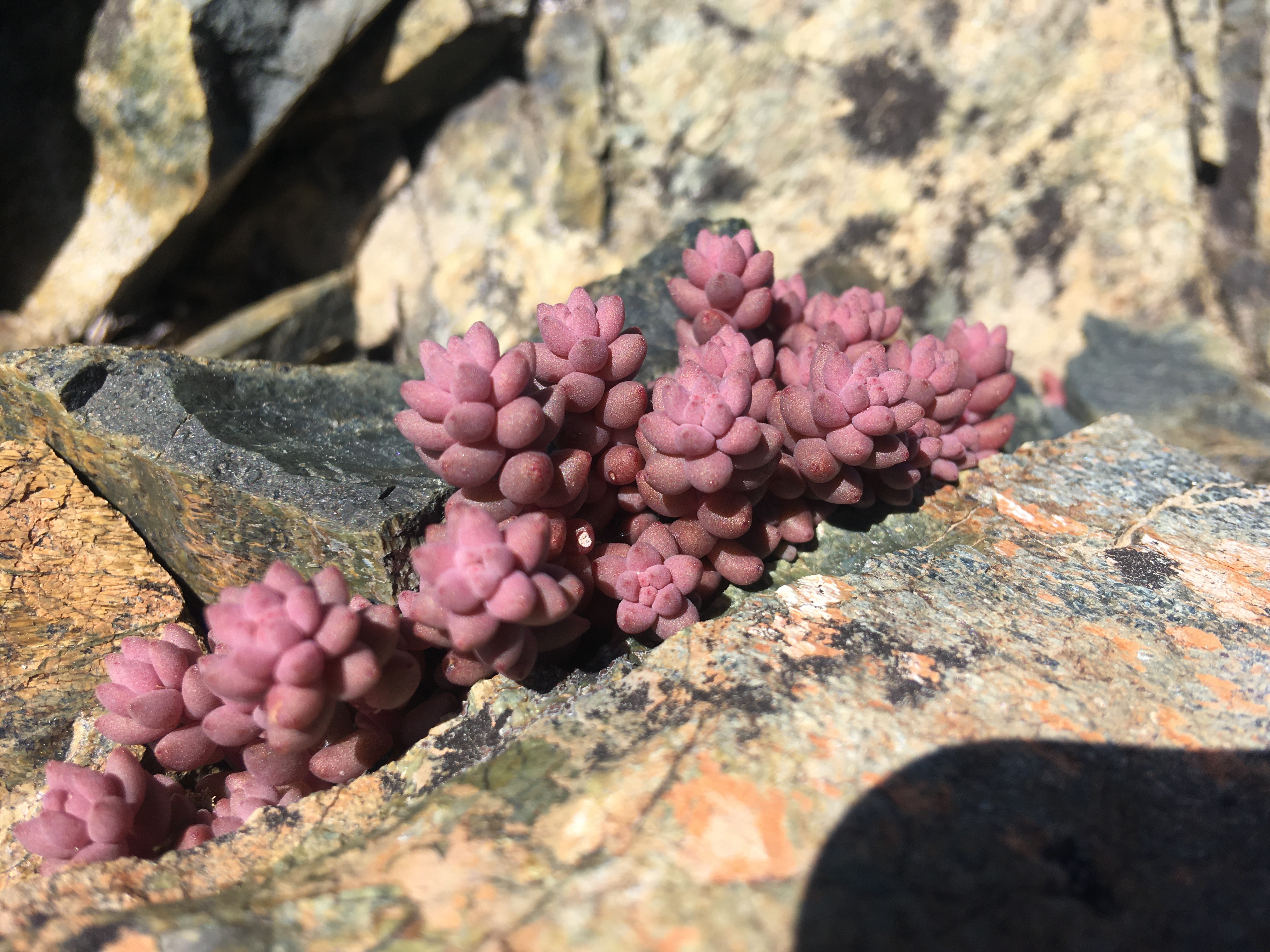 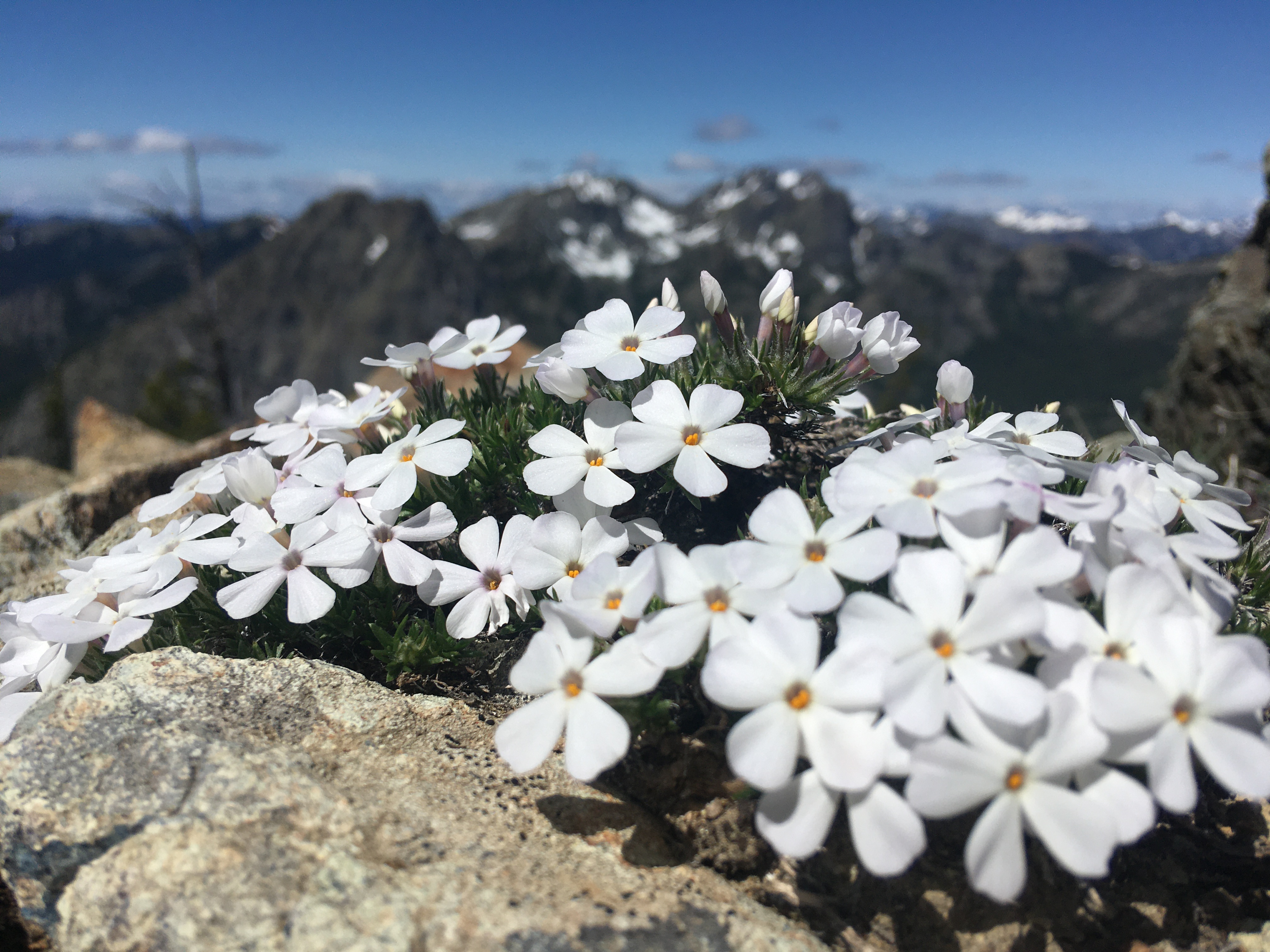 The Teannaway provides! Nice one guys!!

Mike , your TR and photos of the terrain plus the flowers was GREAT.  It was good that you did the video of the ride from the parking "lot" to the "end" of the parking places. I think the "end" continued to grow after you left. On this trip, Thursday night was good and Saturday was a mess. 😉

I've seen overflow parking at that  trailhead even  some years ago in summer, though not running  more  than a few hundred yards down  the road. Between the  increase in the  region's population,  the  increase in the  percent of people who get out  hiking, the impact  of COVID on outdoor recreation (i.e. incenting people to do stuff outside because it's good for your health and also it's not a scary indoor public space) and the amplifying effect social  media  is  having on certain popular spots  (such as Ingalls Lake) I think we are continuing to see new peaks of crowding this  summer, and  it's  flowing into weekdays as well (thanks  COVID).

Looks like fun. You all are strong to carry your gear in and out of there, even if the trail's "good".

1) This is epic! Thanks for sharing! I love the long walks for "gimmicky" skiing.

2) How did you get to add so many photos? I thought there was a 10 photo limit. Btw - they are great!

@mikerolfs and @jtack, you always get the prize for getting the most unique trips... @kamtron's "legendary patch skiers strike again" pretty much sums it up, haha. Love the story and the flower pix.

@Hefta-Gaub, one can add as many photos as they wish by using the image icon in the editor (in which case you simply enter a URL of the image, which is already hosted elsewhere, e.g. on Google Photos, OneDrive, iCloud, Imgur, etc.). If you use the "Media" tab, then the limit is 10 (as we want to allow image uploads in a way that still keeps the site performance up : ) See the #1 section of this how-to article.

Excellent report!  Love the pics, the skiing, the story.  Booo to the parking situation - I guess it just rewards the creativity of fellers like yourselves!

Thanks mike for the great report, trying to put in a few pictures; 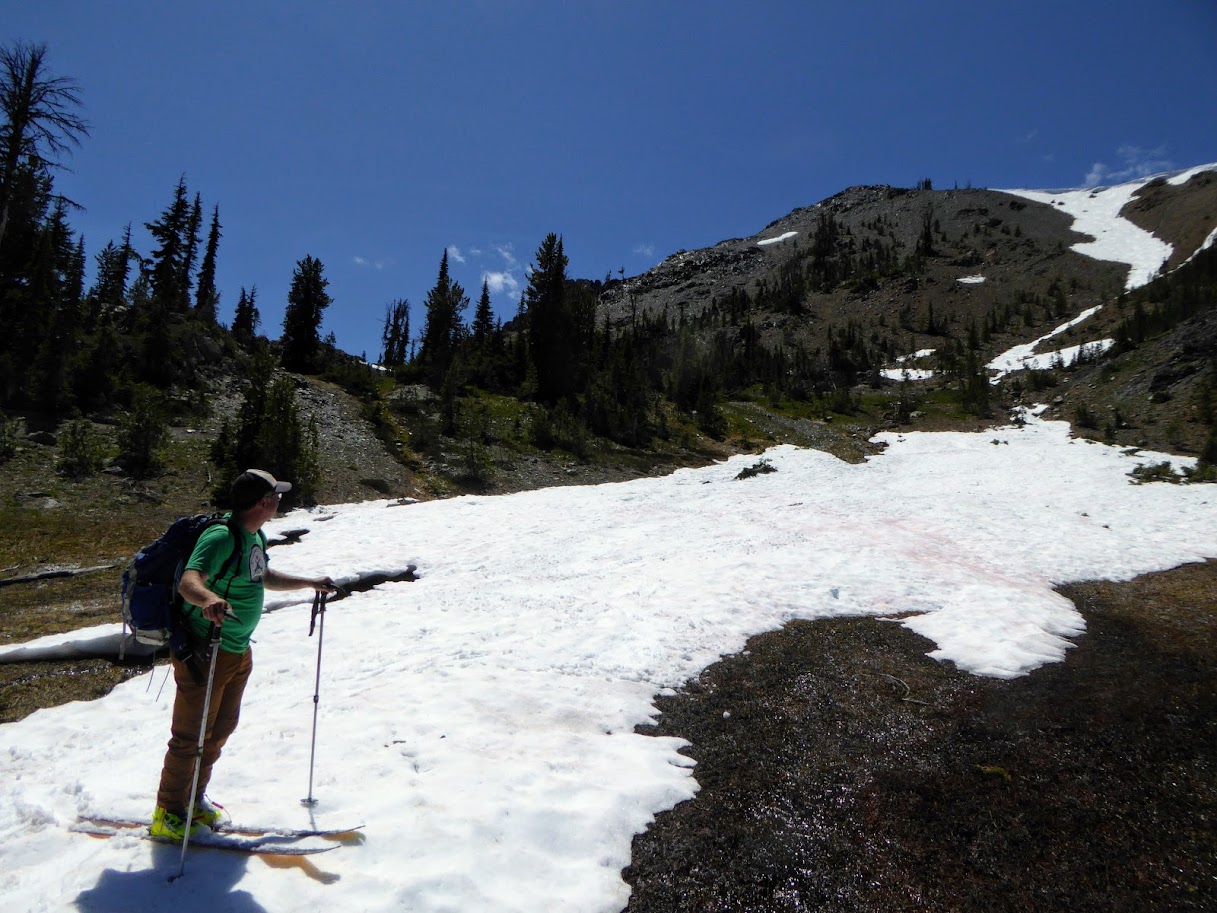 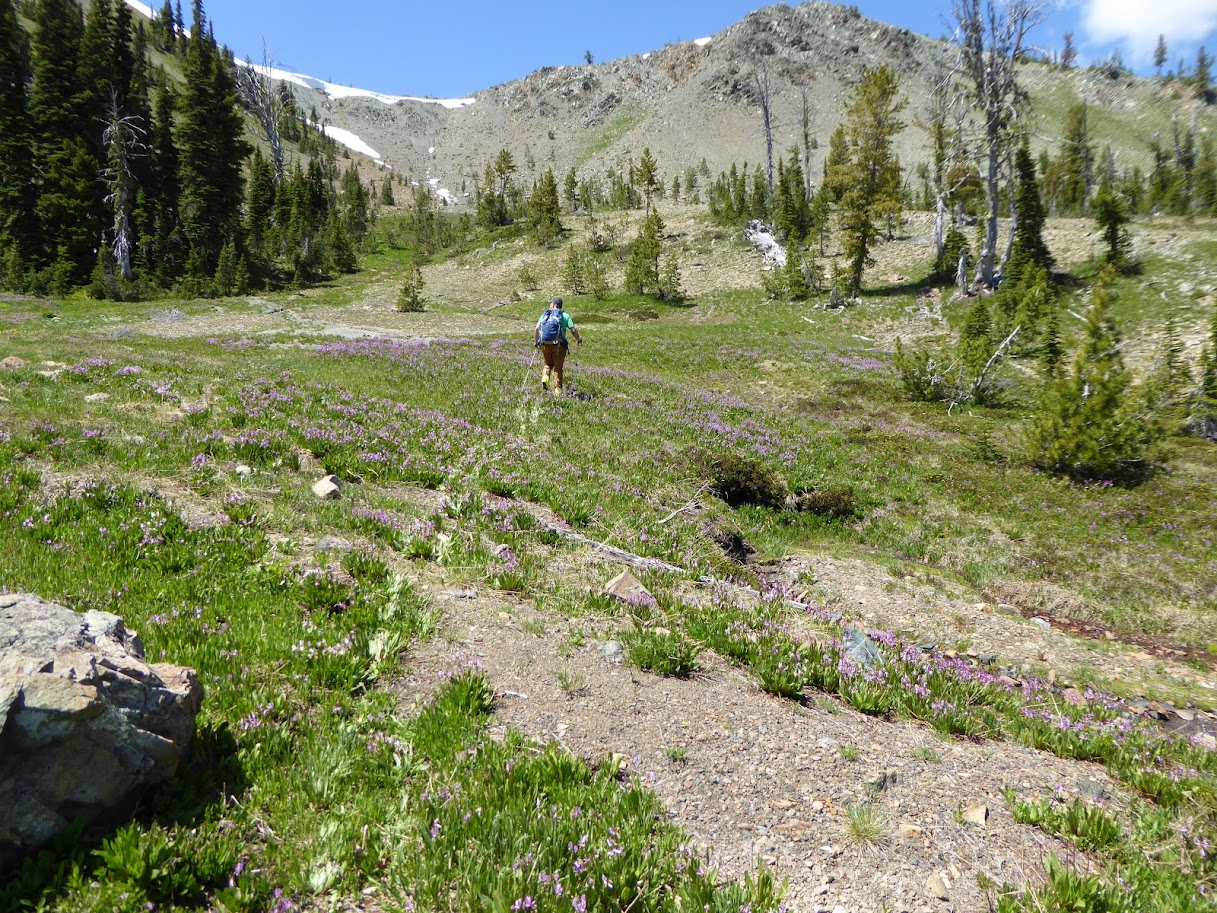 Second lap as good as the first! 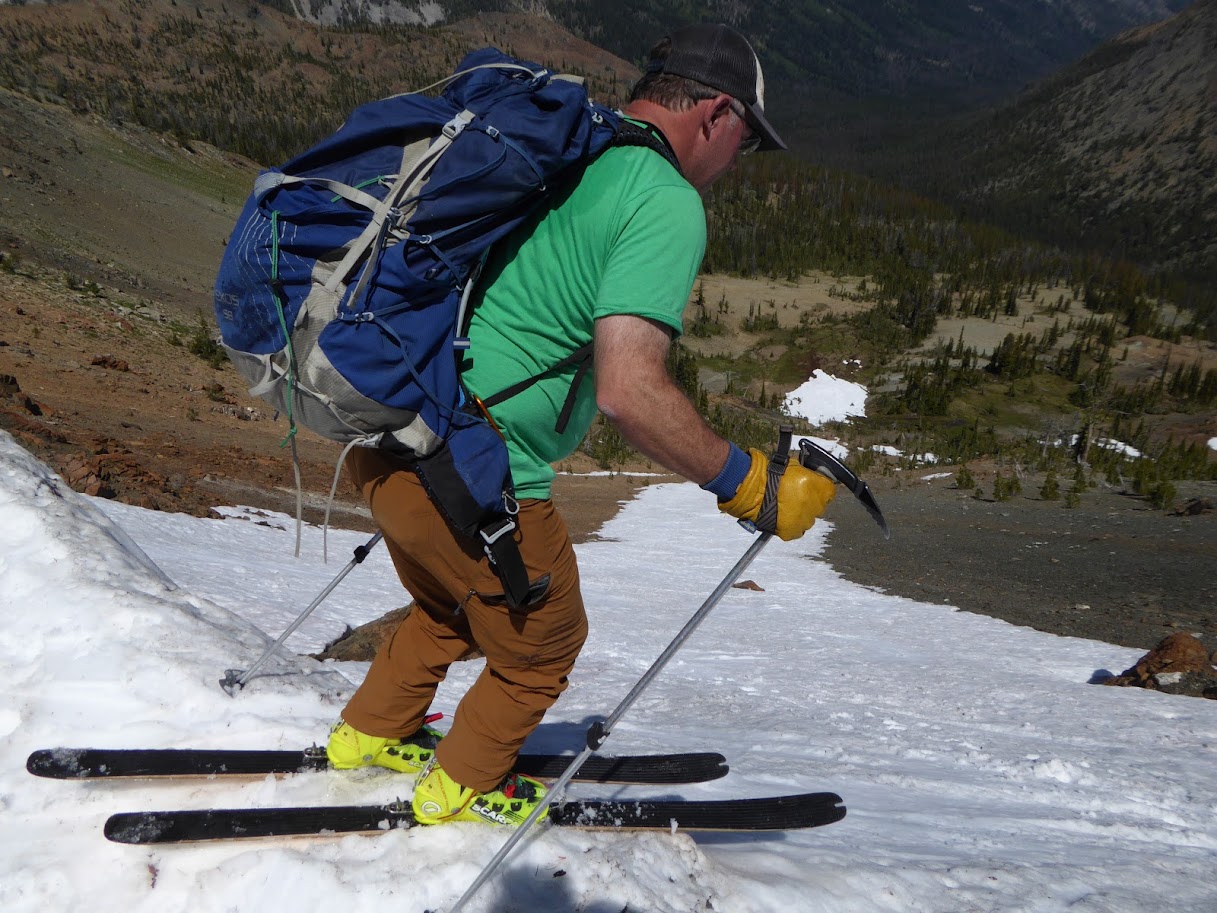 Thanks for a great trip!

Hi Mike, keep forgetting to post. A week later (week day), 6-8 cars at Esmeralda Basin parking lot. Even last week, we camped Beverly Creek for a few days of hiking and flowers. And it’s an easy drive from Ellensburg 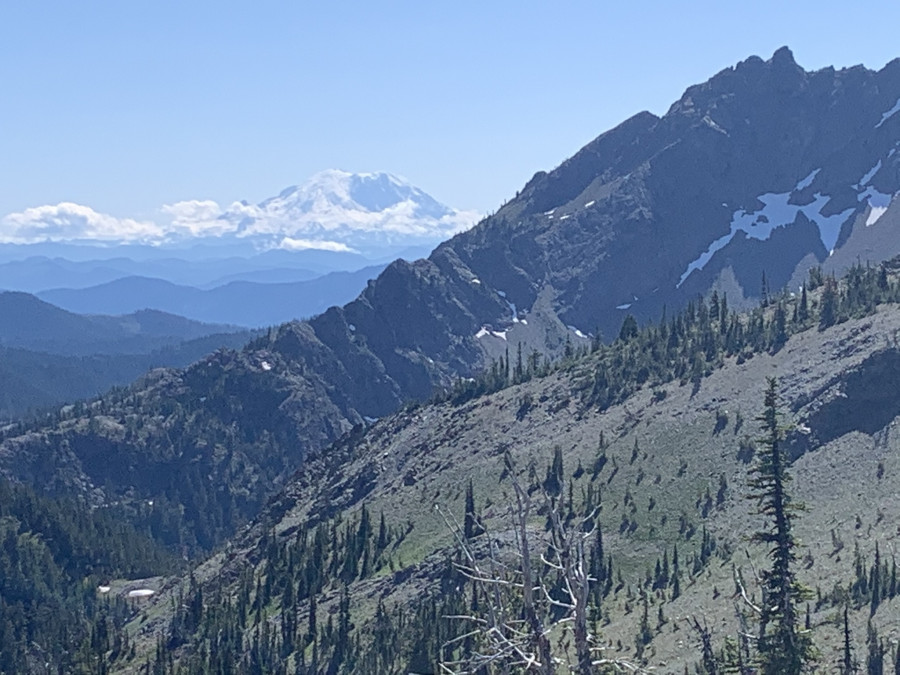