2/7/11
WA Snoqualmie Pass
29932
20
Posted by Amar Andalkar on 2/7/11 1:50pm
Our dear friend Monika went missing on Tuesday, February 1st, having tragically fallen down the northeast face of Red Mountain after a cornice collapsed, leaving her skis and pack and helmet behind on the 5890 ft summit. She remained missing for the next four days (see the main thread
Our group looking up at Red Mountain from Commonwealth Basin.

So a group of 10 of Monika's friends met today at Snoqualmie Pass at 6:30am, arriving in a snowstorm which had already dropped 2-3" of new snow at pass level in the few hours since the rain had turned to snow. We headed out for Commonwealth Basin just after 7am, the new snow taking the edge off the very marginal, low-snow, frozen-hardpack conditions along much of the route. Numerous creeks are still partially or fully exposed along the traverse into Commonwealth, making for a tedious up-down approach. We skinned to the head of the valley and up to about 4700 ft on the south face of the peak, then switched to booting on foot, following traces of a mostly-buried bootpack from several days earlier. A firm icy freezing-rain crust covered much of the south face above 5000 ft, making crampons helpful in the windblown areas where the crust was not covered by new snow.

Approaching the summit of Red Mountain.

We arrived on top at 10:30am in a gusty southwest wind and blowing snowfall, finding with some surprise that there was no sign of any gear, only bare blank fresh snow.

The broken portion of the cornice, a few feet west of the true summit.

Taking precautions to maintain a more-than-safe distance from the corniced edge, several of us dug and probed and quickly located Monika's pack (with Kitty safely inside). We soon found her helmet, skis, and poles nearby a few minutes later, all buried under 1-2 feet of new snow.

Trying to find the snow-covered gear at the summit.


We held a brief remembrance of Monika at the summit, to honor her memory and the inspiration that she continues to provide us all, and many tears were shed.

We packed up her gear and skied down after about 45 minutes on the windswept summit, choosing to descend via the (hopefully much more skiable) southwest face rather than the icy south face we had climbed. The uppermost 200 ft was icy rain crust on the southwest side too, but then it was quickly covered by 6-10" of new snow, which appeared to have bonded well to the crust. The rest of the descent was in fresh powder, with no signs of instability other than minor surface sluffs, and the skiing was unexpectedly quite good, especially so considering the very poor ski conditions on the route we had climbed. We all agreed that it was a very enjoyable ski descent, all the more so given the depth of emotions that had been released at the summit.

Ryan skiing with Monika's skis on his pack.

Then the long and winding exit from the basin, down our skin track from only a few hours earlier which was already filled with fresh snowfall. We arrived back at the pass shortly after noon, finding about 3" of new snow on our cars. Winter has returned to the Cascades, and Monika will be with us always.

Our group with Monika's helmet and Kitty after the trip.

I hope that others in our group who went up Red Mountain today will post more photos and any personal recollections of the day here. I think that this was a very important day for us to come together and do this. I wish that a few more friends of Monika's and ours had been able to join us out there too.


(Edited to add 2 more photos. Plus a few other edits.)
2/7/11 11:55pm
erick-heyl
Bad Weather, Beautiful motives.  Looks as if the mountains themselves have been upset as well as mourning.
I'm moved by this.
A great friend of mine died via a cornice release back last October in Asia.  I really appreciate seeing folks come together to honor, dedicate some time and energy, and retrieve what should be coming home.
2/8/11 1:16am
darryl
Thank-you, Gentlemen. I can't imagine how hard that must have been.  Thank-you.
2/8/11 1:19am
bcglaxer
Beautiful story. Thanks for sharing.
2/8/11 1:28am
marcus
Strong work you guys.  The shrine kills me.  Beautiful.
2/8/11 1:31am
margaret
Beautiful.  Important.  Thank you all.
2/8/11 2:19am
daniel
Thank you all for doing this. Just reading about it is heart wrenching. I showed the picture of Monika's helmet and kitty on the summit to my wife last night and we both had tears. Both for Monika's loss and for the amazing community we have here in the Cascades.
2/8/11 3:24am
stefan
Thumbs up.
2/8/11 6:26am
daveb
It has been an amazing experiance to see the number of people Monika affected and to meet many of them.  She brought out the best in people and it is not suprising to find out her many friends are also great people.  She was so special to us all.  Thank you Monika for your friendship and your friends.

The first photo is the group nearing the summit and second photo is Ryan carrying Monika's skis. 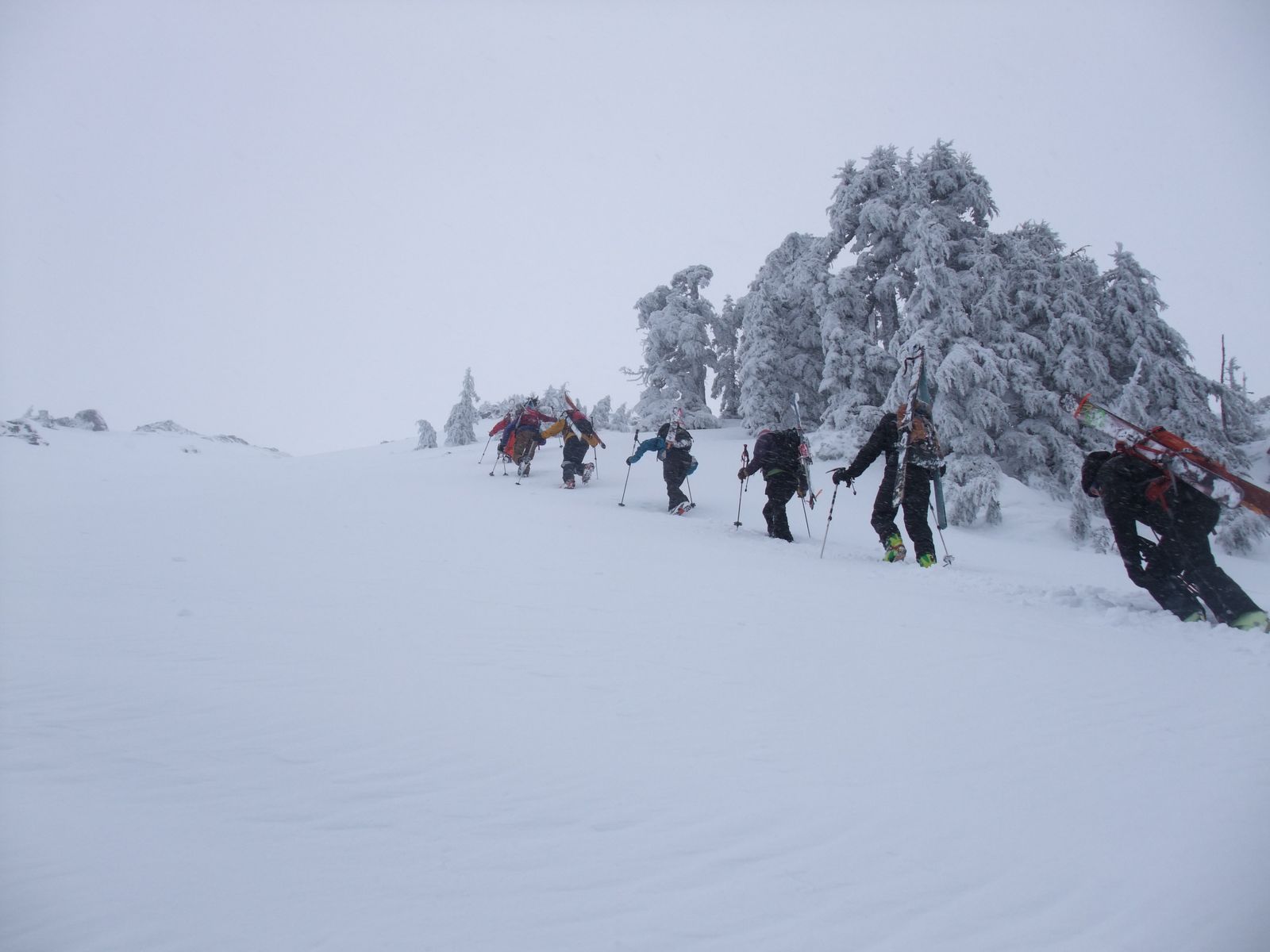 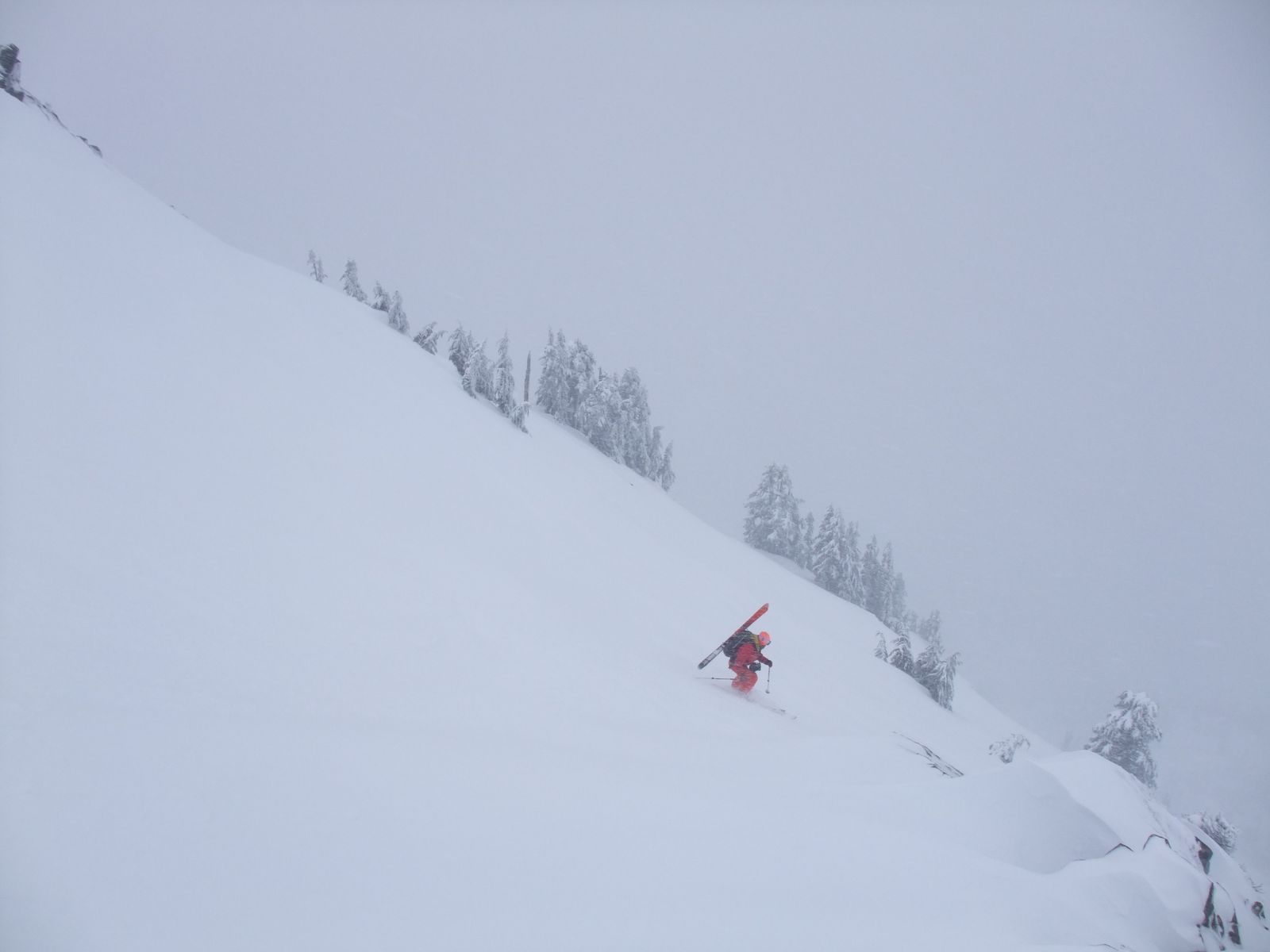 2/8/11 8:37am
lulu
To the teams who have done so much and given so much to bring honor to our sleeping beauty.  Thank you for your efforts and your love for Monika.  This site and all of the beautiful posting has been a wonderful tribute.  Monika is an angel now. Love, LuLu
2/8/11 10:19am
mofro
Thanks guys for bringing some about closure.
2/8/11 10:37am
rnbfish
Well done Gentlemen.
2/8/11 11:35am
david_coleman
I'm not sure what was more difficult:  being and seeing her during the recovery mission on Saturday or seeing her stuff on the summit of Red yesterday.  I just know that I went full circle on this (for support & respect) with some amazing folks on this absolutely mind blowing & numbing tragedy.  As Dave Brown said, she brought out the best in people (even each time in the multiple conversations/interactions I'd had with her since I met her a few years back), and this was never more evident than the past few days.

Spoke about the multiple stages of grief with a counselor/thearapist friend of mine today because at times I unexpectedly come across a wave of emotion & it all comes out.  This will take some time, if ever, to accept.
2/8/11 1:16pm
jackal
The picture of her helmet and kitty brings tears.
Peace to you all.
2/8/11 1:17pm
gregg-c
Going down on both knees and Diving into the snow with both hands and finding her pack was one of the sadder experiences of my time in the mountains.  I wasn't expecting that.  The ski up was somber and the group was subdued.  We created an honoring on the summit in the wind and snow that was as profound as it was spontaneous.  Pure emotion does that I guess.  We all loved her and we left the summit uplifted by the shared grief.  She would have been proud, as I was, to watch the talented and skilled group of ski mountaineers depart one at a time down the bullet proof ice and to shred the powder that waited.  Her honor guard departing......

Dave B:  beautiful pics and words  (I now know why Monika spoke so highly of you)
Amar:  Great write up. I loved how you presented the story.
Mike:  Thanks for coming down with me from Bham and being such a stalwart friend
Ryan:  I love you.
Drew and Dan H.:  It was a pleasure to see power and grace combined with humility.
Eric:  You squeezed this trip out of a busy day because you cared
Jeremy:  I loved meeting you and talking on the uptrack
David:  Your efforts for Monika day after day
All of you:  For letting the old guy break trail the final 400 ft. to the summit.

Peace and Respect to all of you

Mike on the upper ridge
Mike, Monika and Gregg at Kokanee Hut  (Why we were there yesterday) 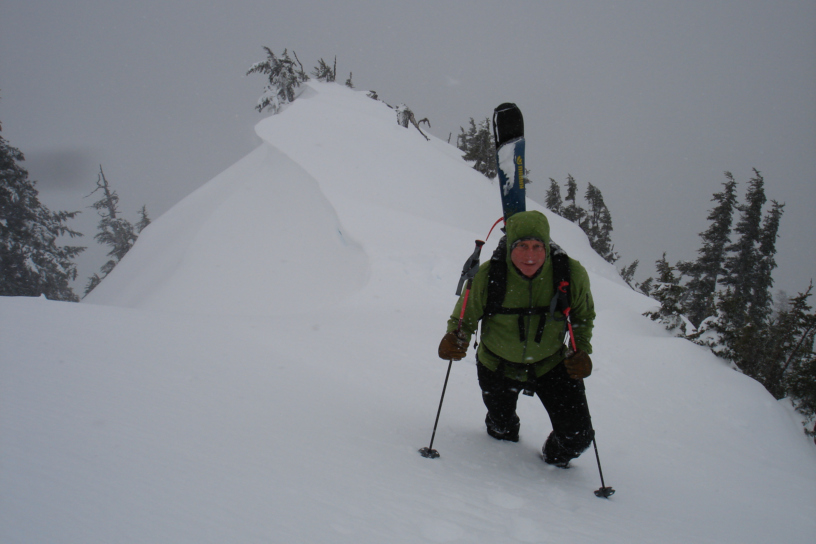 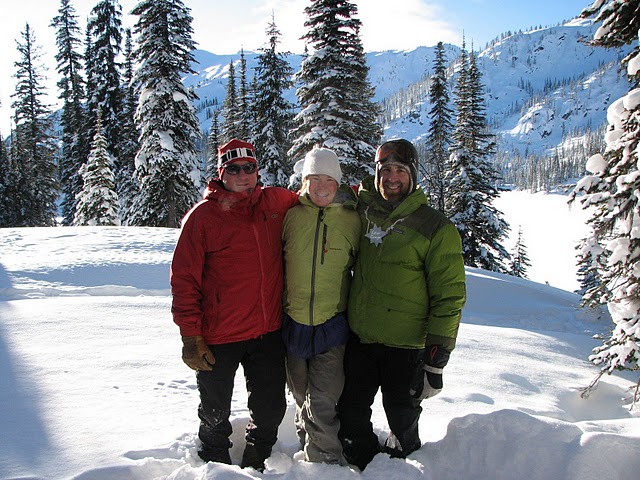 In an effort to make a slide show/video in memory of Monika, Khahn and a few others are collecting photos of her for a memorial servie/celebration of her (date TBA).  If you have a photo or two that you would like to share, please email it to Khahn at This email address is being protected from spambots. You need JavaScript enabled to view it.

If possible include an approximate date for the photo and location.  If there are any others in the picture, include their names too.

2/9/11 12:44pm
teledavid
I only knew Monika through the glacier travel class but her loss has made me very sad.  It's hard to lose someone who shares our love of wild places.

Thanks guys for your efforts!  Well done.
2/10/11 1:03am
ron-j
For those of you that may have been wondering...
Flintofts’ online Obit for Monika shows her memorial service to be scheduled for 7:00 pm on 2/17.
More details on the service and location are posted HERE.

2/16/11 2:04pm
atraslin
Monika brought it every time to the Alpental race and seem to be having a blast.
I was hoping to do a trip with Monika up to Glacier Peak this past spring,it just
didn't work out with timing.It was really cool to see all the friends out there with
the stuffed cats putting the hammer down in Monika's honor.