Skiing one of the big lines on the north side of Rainier has been an obsession of mine for a couple years now. Earlier this season I ran into Mark Dudzinski, a skier from Utah who shared the same obsession, and we made some vague plans for June involving the Edmunds Headwall and/or Central Mowich Face. I knew I was ready, but as our warm, dry spring trashed many of the classic routes on Rainier it was less clear that the mountain was ready for me. A Pineapple Express followed by a big window of high pressure gave us hope that the high, steep, remote lines on the NW side of the mountain might be skiable, and a more specific plan was hatched to meet at the Mowich Lake Road gate with enough supplies to spend a few days on the mountain and ski whatever was looking good.

Wednesday afternoon we set out on bikes and made it halfway to Mowich Lake before hitting the snow line. From there we skinned straight up through the forest to the trailhead. Of the two options for getting to Ptarmigan Ridge we decided on Spray Park Trail, as it looked more direct on the map. Bad choice - the trail was melted out most of the way to Spray Park, with plenty of deadfall to maneuver around. Eventually we reached Spray Park and progress became much quicker as we skinned up towards Ptarmigan Ridge with the sun setting behind us. We found a great campsite on the ridge just in time to catch the alpenglow on Rainier, and had dinner as the lights came on in Tacoma 8000’ below. To save weight we didn’t bring a tent – it was cold but tolerable up there with minimal wind. The Edmunds Headwall was looking good, while Mowich Face looked iffy from our vantage point. We decided to climb and ski the Edmunds the following day, while also scoping out Mowich Face with an eye towards skiing it one day later if it looked OK and we had anything left in the tank.

Thursday morning we left camp around 7:30 and found a suitable spot to downclimb the chossy south side of Ptarmigan Ridge towards our objective. We took a pretty direct route across the glacier, working our way up to the base of the Edmunds Headwall. The bergschrund crossing on climbers’ left involved a couple of awkward, scary climbing moves but we made it across without incident. Once across the shrund the slope immediately ramped up to 45-50° and stayed there all the way to the top. Climbing conditions were generally good and we made fast progress on firm but not icy snow until somewhere around 10,500’ where we hit the rain-snow line from the most recent storm. From there we took turns breaking trail in boot-deep summer powder all the way up to the high point at 13,400’ where Sunset Ridge and Ptarmigan Ridge converge. It was slow, exhausting work and we didn’t reach our “skier’s summit” until 5PM. Lacking both energy and time for the traverse over to Liberty Cap, we took a short rest and prepared to ski.

We dropped in around 5:30 for what will surely be one of the very best runs of my life. The snow transitioned seamlessly from powder to corn and stayed good all the way to the bottom of the glacier. We picked our way down upper Sunset Ridge, through a couple small chutes and reached the rollover that marks the top of the Edmunds Headwall. In different conditions this would be a pretty intimidating spot, but the perfect snow had us feeling strong and we skied without hesitation, making fast turns down the headwall while trying to always move left to avoid the worst of the sluff coming down with us. On the descent we stayed skiers’ left to cross the shrund and were able to keep our skis on through a narrow snowbridge, which made things easier but no less scary. We followed our uptrack back across the glacier, enjoying great snow conditions on the lower angled terrain all the way back to the base of Ptarmigan Ridge. While climbing back up to our camp Mark provided the quote of the day…

Mark: “I wish this snow wasn’t so f*cking good!”

Mark: “Because now we’re gonna want to go back and ski the Mowich Face tomorrow.”

He was right – Central Mowich Face was looking pretty skiable after all, and we now had a bootpack in to access it. But we were both feeling the burn from climbing thousands of feet through the steep & deep. We talked about it for a while back at camp but ultimately decided that it had already been a successful mission, and we were unsure we’d have the energy reserves needed to repeat the climb the next day. So on Friday morning we packed up camp and took a different route back to Mowich Lake that avoided Spray Park Trail and instead went over Mt Pleasant & East Fay Peak. Our exploration was rewarded with continuous snow all the way down to our stashed bikes and a couple of nice ski pitches along the way, completing a memorable trip to one of the wildest places I’ve ever been, despite being so close to Puget Sound. 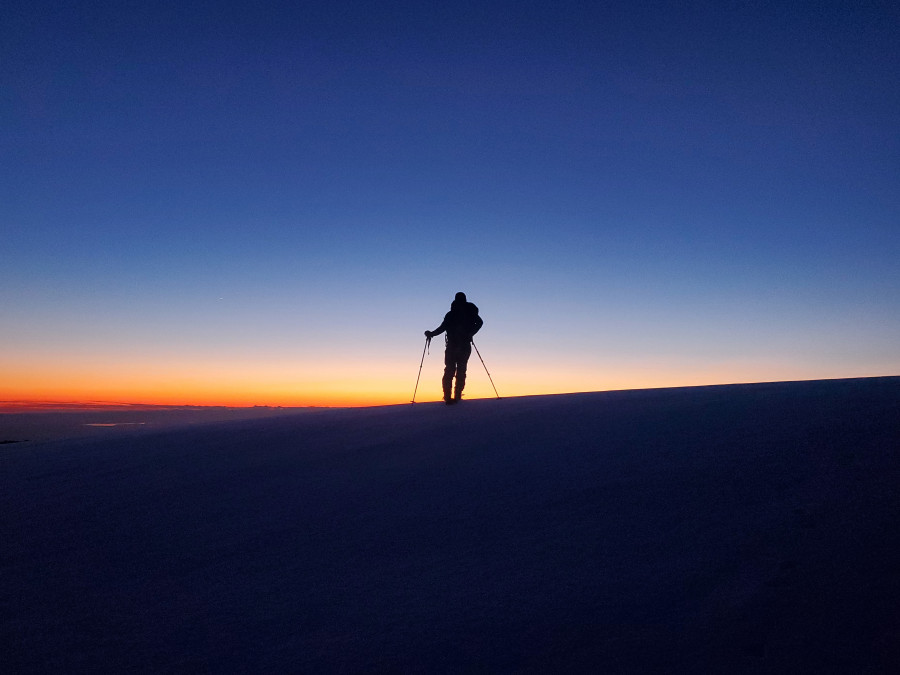 Skinning up below the Mowich Face 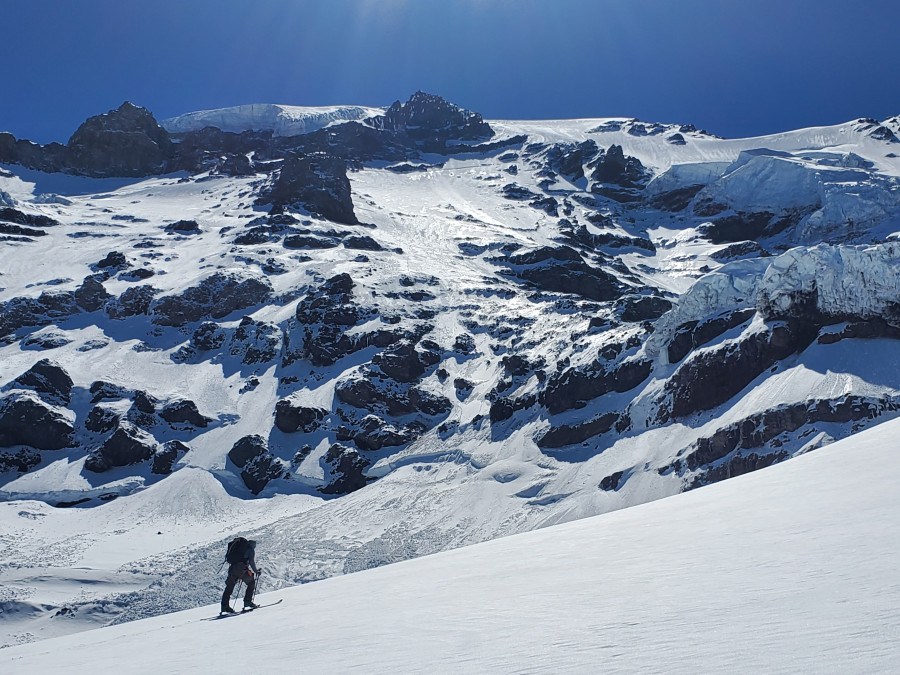 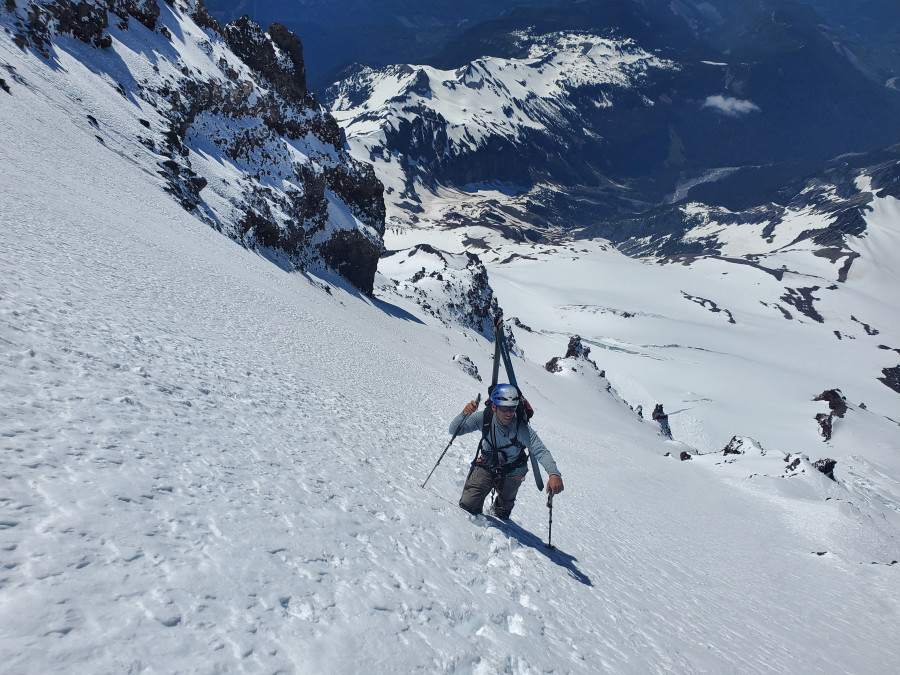 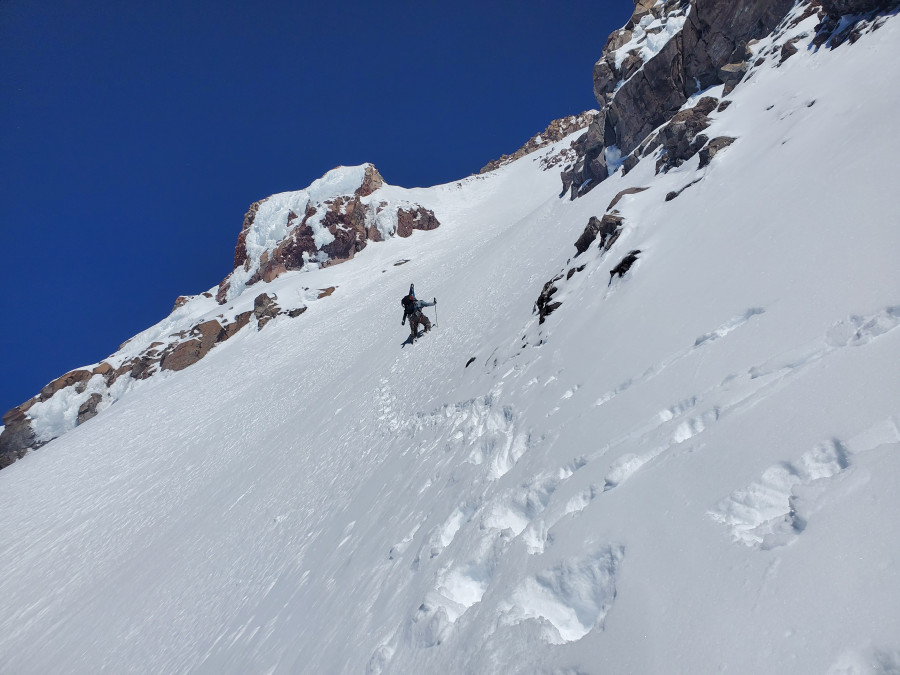 Dropping in from the top of Sunset Ridge 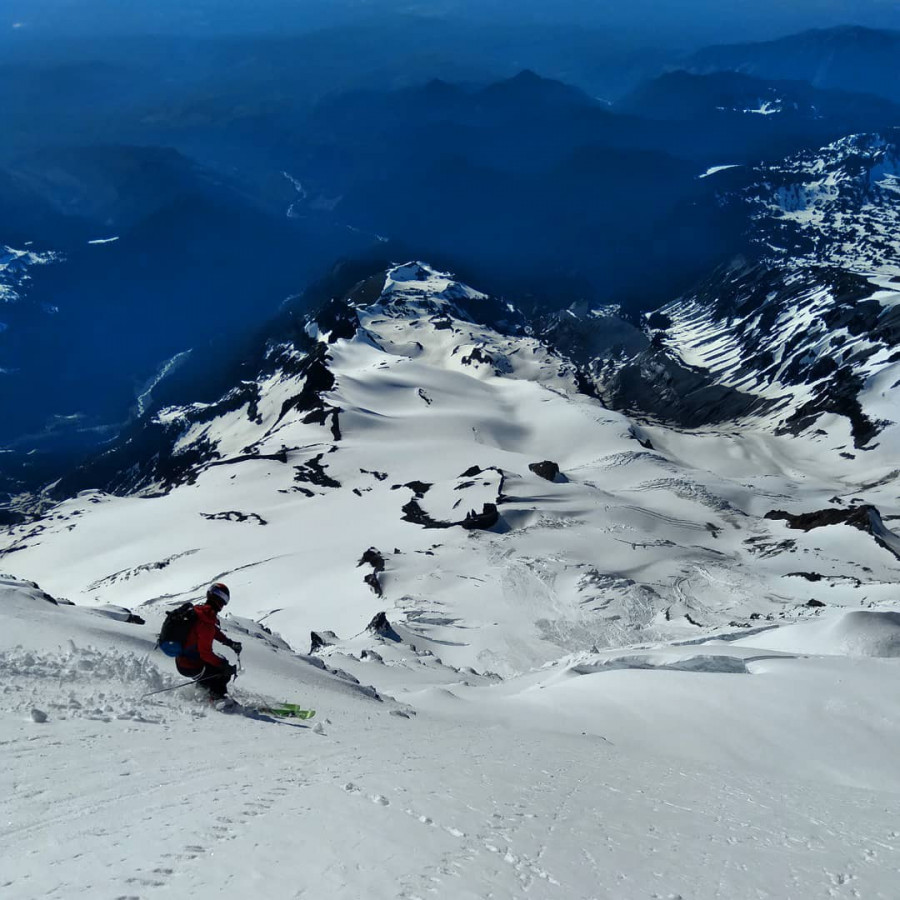 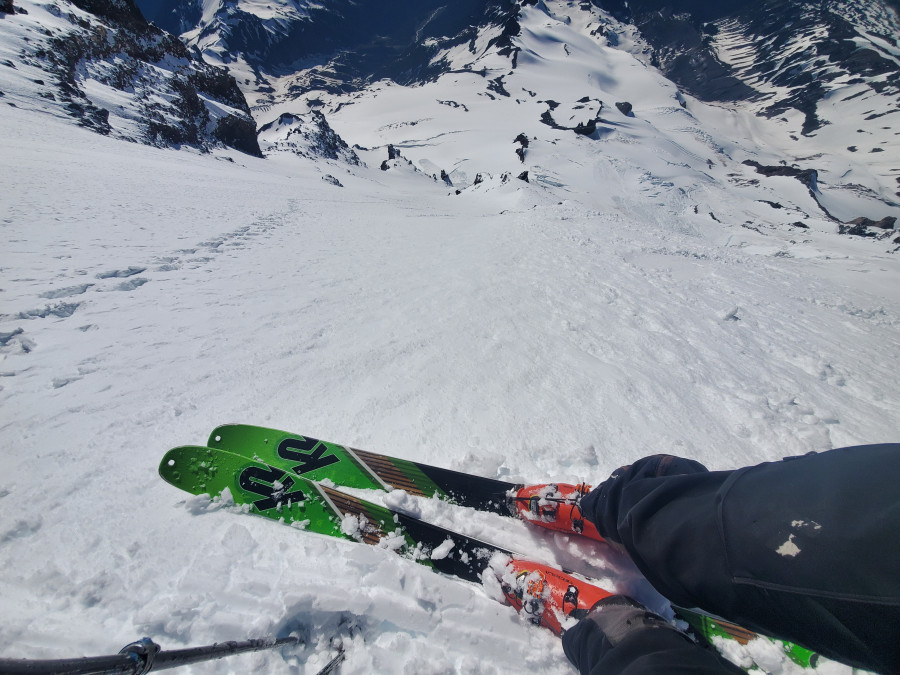 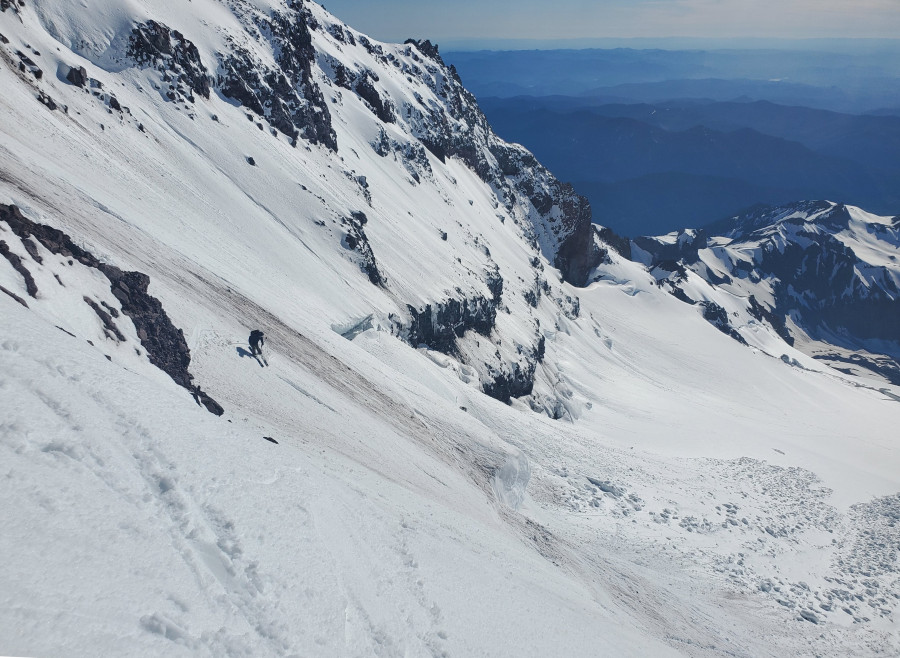 Back at camp, Edmunds Headwall on right 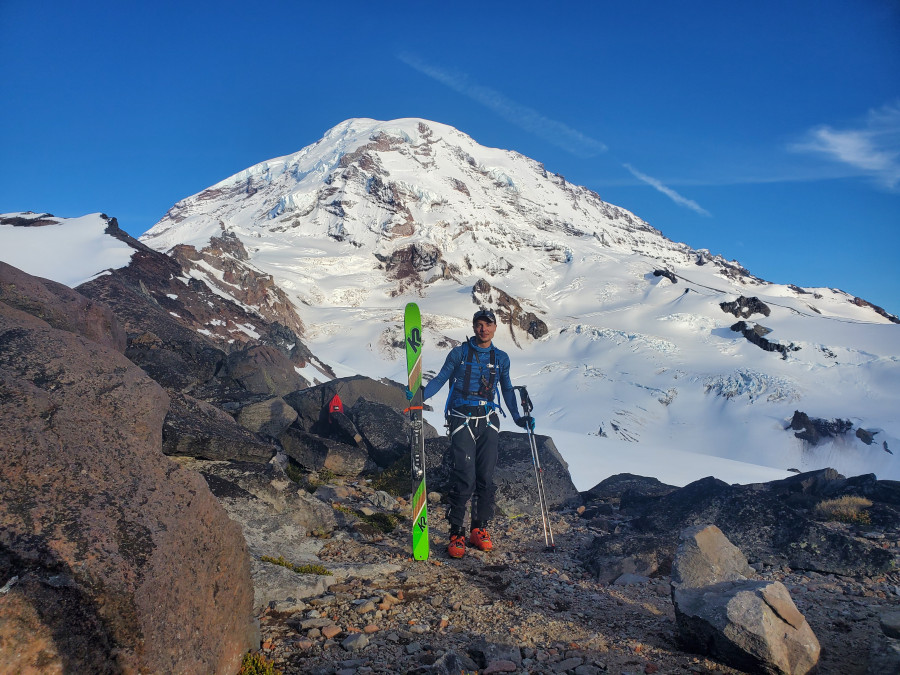 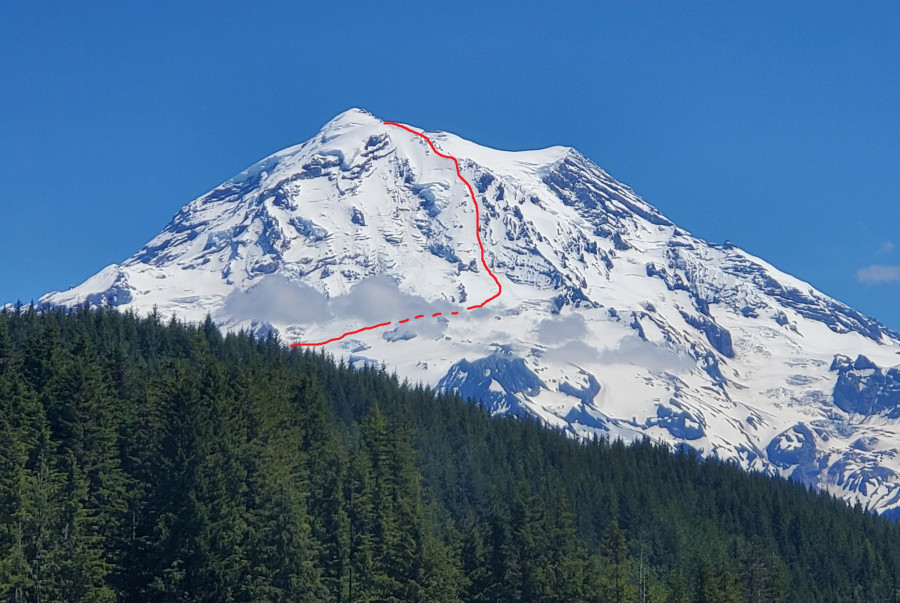 Nice work. Way to make a conservative call too!

Fantastic! How often can you check off a monster climb or line, and get to enjoy it and take fantastic photo’s on the way? For many people - never. 😍

I always wanted to get this one but never got it together. Nice job and pix.

Solid work, timing does not get better than that!

Stable pow on that face might be as good as it gets in the lower 48. Inspiring stuff. 👍

@lilb907 agreed! On the way out I was thinking that if I want to top that I'll probably have to go to Alaska. I remember seeing your trip report last year and wishing I was up there too. That's an impressive route to solo!

Hard to believe that Central Mowich is in "good" condition from your pic.

Way to score on the face! Quite the line.

@kamtron we were thinking the same thing, but there is a much cleaner way through the lower Mowich that is not visible from the angle this photo was taken from.

Thanks so much for posting this.  Stoke inspiring.