We left Paradise on Thursday at 3PM and hit Muir ridge at 6.  We were in a white out most of the way and nav was surprisingly tricky as seemingly all of the rocks were covered in snow, even Moon. 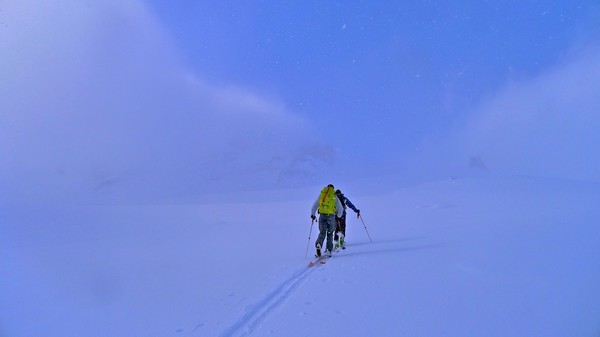 After sleeping in a bit we set out for Gib Ledges (8AM).  Two guys had started ahead of us so we had a fresh broken trail until we passed them right before the exit chute.  Gib was very filled-in and in great climbing condition.

Our plan was to head to Point Success to check on a route there and so we took a leftward traverse from the top of Gib.  Usually we would have had to navigate around several crevasses but the upper mountain is so filled in right now that we just walked straight to the saddle between Columbia Crest and Pt. Success.  We topped out on Success at noon.

The SW side of the mountain was completely rimed and we spent about and hour dinking around looking at stuff before heading back towards the upper Nisqually.

From Pt. Success to about 13,200 ft we skied smooth, wind-beat snow with patches of sastrugi.  After that it was full on no fall skiing above the cliff on knife hard 'snow' until we hit some decent stuff at about 11K.  The route was a pretty simple rightward traverse until we hit the exit chute.  The exit was skiers choice of two parallel lines that had filled in around a serac. 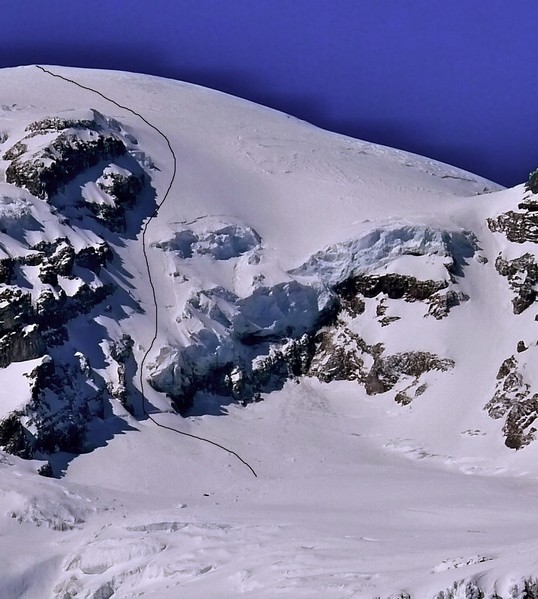 Once we were off the route we booked it out of the amphitheater and bended left off the Nisqually and onto the snow field.  The snow was great from here and it was nice to make some stress-free pow turns.  It was so good that we decided to drop back on the Nisqually and head for the bridge.

Lot's more pow skiing ensued followed by a bit of slush skiing before we got to the road (3:15PM).
4/23/11 2:30pm
otter
nice one
4/23/11 11:02pm
amar-andalkar
Great work you all, skiing one of the few remaining unskied routes on the Mountain. (If someone has skied the Ice Cliff before, I'd like to find out about it!) In all the years that I can recall, the route has never had as clean and direct a ski line as it does this year.

And it was really nice to run into you at Pebble Creek afterwards, fresh off the big descent, and chat for a bit. We were headed down the Nisqually towards the bridge anyway, so we ended up following your tracks out the right side exit through the woods at the bridge.

Seth, I remember some of your words summing up the descent: "It had to be done." Absolutely!

Here are three zoomed photos of your ski tracks on the upper, middle, and lower portions of the route (taken the next day when we skied from Muir to Nisqually Bridge again, in a much larger group). Click any image for a larger version:

Got a name or is that just a rumor?  I've been working at RMI for 7 years and hadn't heard that any one had skied the line.  Also my roommate has worked at IMG for 6 years and hasn't heard of it either.
4/28/11 5:46am
ken-m
I guess we'll just leave it in the realm of rumor for now- I was thinking somebody else might have more info. Seems like it's not my place to start name dropping non TAY members regarding rumors on the internet.
4/28/11 12:17pm
ken-m
Confusion dispelled and rumors disconfirmed- congrats on an aesthetic first descent!
4/28/11 12:42pm
kath
sweet line .. pure awesomeness .. congrats on the 1st descent