Yesterday Lucas Cairns and I, accompanied by Charlie the powder hound, did the "Alta Traverse". We climbed the SW face of Alta, skied an interesting line down the NW-N face, and exited via miles and miles of Gold Creek. Along the way faces were shot, slabs were triggered, low-elevation forests were survived, rivers were crossed,and paws bled. What started out as a storm/exploration day with zero expectations ended up being the biggest adventure of the season, on a peak that wasn´t even on my radar 24 hours prior.

Lucas had been scheming a descent of Alta ever since we spied it from Kendall Couloirs back in December. I didn´t take much notice at the time but will forever look at Alta with different eyes and appreciation now that I´ve been on it. Alta is a very complex mountain, especially the N and W aspects. Topos make it look like a simple choice between a gully down the west side, a gully down the north side, and a couple open faces in between. The reality is a mess of cliffs, terrain traps, and other assorted features that add up to a spicy descent if you´re dropping in "blind" and not prepared for a rappel.

Armed with a single photograph, a trip report consisting of 6 sentences written in 2009, and willingness to improvise the rest, we left Seattle at 6:30 AM and headed up Gold Creek. Neither of us had ever set foot in this valley and the forecast called for light snow all day, so expectations were low - I figured we´d skin a few miles up the valley, maybe catch a glimpse of Alta, and head back to the car. If nothing else it would be good exercise for Charlie. As we started up Gold Creek it was snowing and visibility was limited to a couple hundred feet above the valley floor, which seemed to confirm the limited prospects for the day. But by the time we reached the base of Alta it was starting to clear and we spotted a route into the alpine that seemed reasonable, so we decided to go for it.

We left the trail about 3.4 miles in and ascended the forested SW slopes of Alta, booting firm snow in steep sections and skinning boot-deep powder in lower-angled terrain. Finding a way across a large creek at about 3700´ provides the key to the upper mountain if you go this way. We continued to wind our way NE and eventually followed a prominent rib all the way to the Rampart-Alta ridge, reaching the ridgeline at 5500´. We followed the ridge for 3/4 mile to the Alta summit with some exciting exposure and huge cornices along the way. The sky never completely cleared, but visibility remained good enough to find our route and we reached the summit around 1:30.

We had planned to ski the north face of Alta. From our vantage point on the summit the north face appeared to roll over below some small trees. Having no idea what lay beyond that we decided instead to make our way down the NW face where we could see a large snowfield that looked like a great ski run. Lucas and I agreed that this upper section of the mountain provided some of the best skiing of the year, with effortless face shots on every turn. Charlie didn´t complain either, and at less than 2 feet tall the face shots weren´t optional for him.

Here´s a short video that shows how good the skiing was up high: https://youtu.be/hJgkS181BTk

Eventually we hit a band of cliffs which mark the entrance to the west couloir. Here we traversed around to the north face, crossing over several minor ridges and above more cliffs. We encountered thick and very reactive wind slabs through this section - it seems the recent SE winds transported more snow on Alta than on other peaks in the zone. We triggered multiple releases but good terrain management saved us from anything consequential. Finally we reached the north face, skied cautiously through the remaining avalanche terrain, and breathed a sigh of relief when we finally hit the lower angled trees and were out of harm´s way. The skiing remained good with powder turns down to about 4000´, variable/icy below that.

When we finally hit Gold Creek we still had at least 6 miles to go. Gold Creek is just as bad as everyone says. We were forced with a choice between traversing steep slopes on the south side of the creek, where recent avalanches from Alta had run all the way to the valley floor, or crossing over to the north side of the creek and dealing with several bonus crossings of tributary creeks in the woods. We chose the latter and ended up having to ford Gold Creek twice. Fortunately we found suitable spots for crossing and didn´t get wet. We rejoined our uptrack just as it was getting dark, and shortly afterwards we spotted the bright lights of Hyak´s night skiing operation in the distance, reaching the car at 6:30 PM and concluding a big adventure that I´ll remember for a long time.

Congrats to Lucas for having the vision on this one and making it happen, and to Charlie for what is almost certainly the first doggie descent of the north face of Alta. 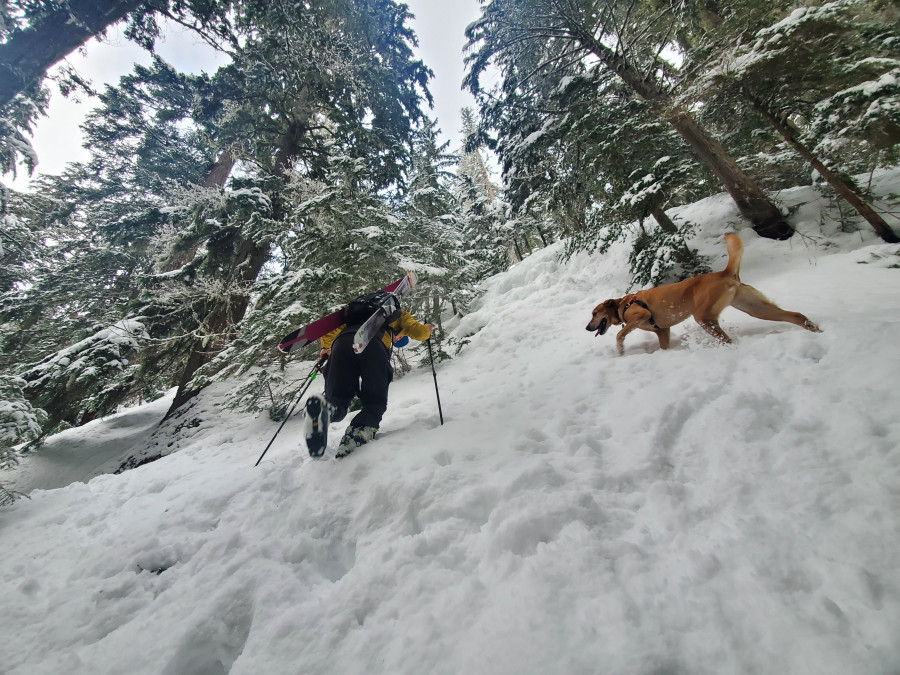 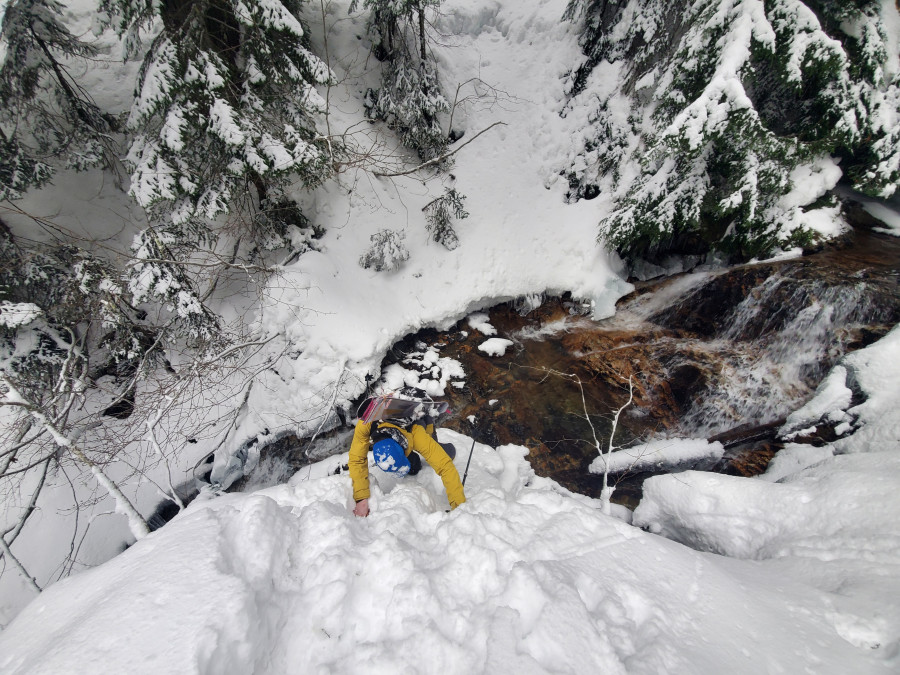 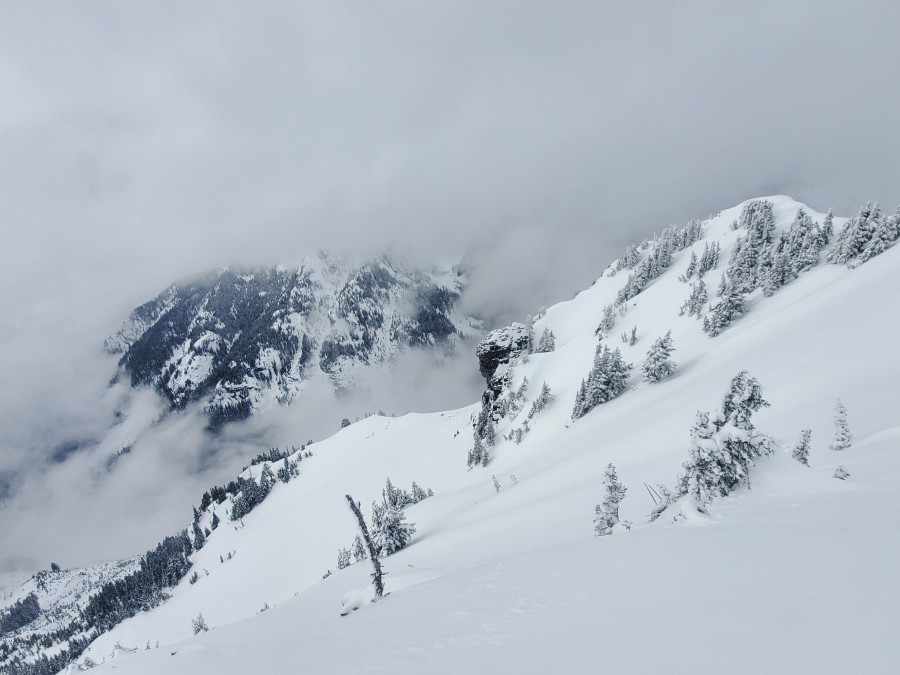 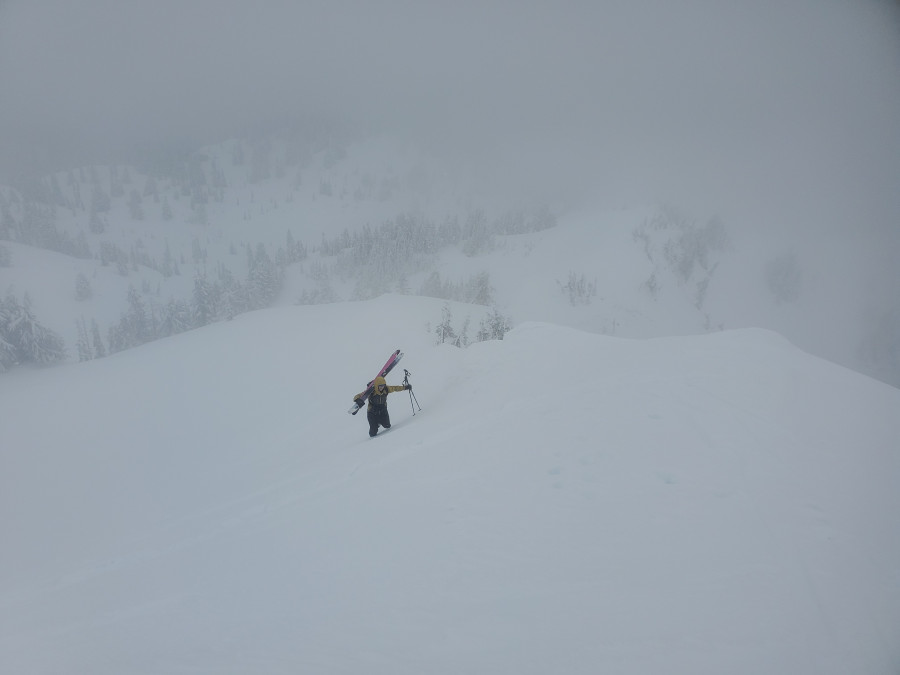 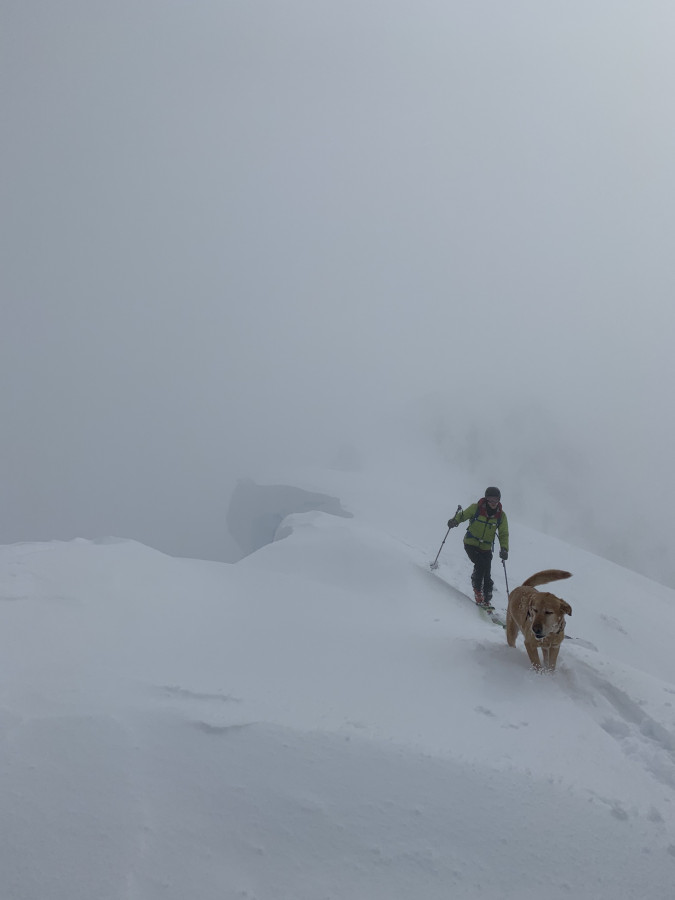 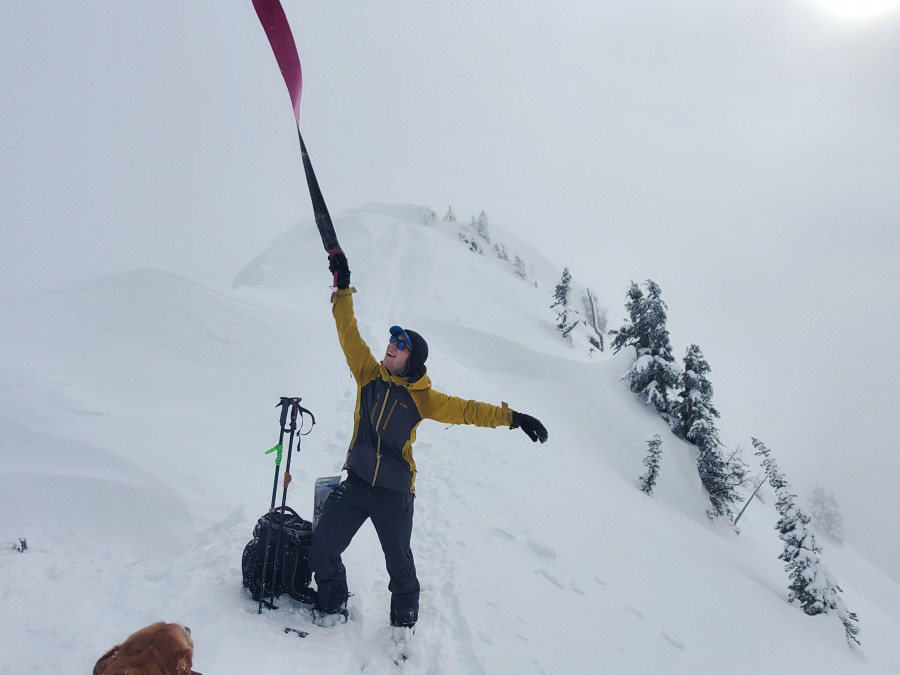 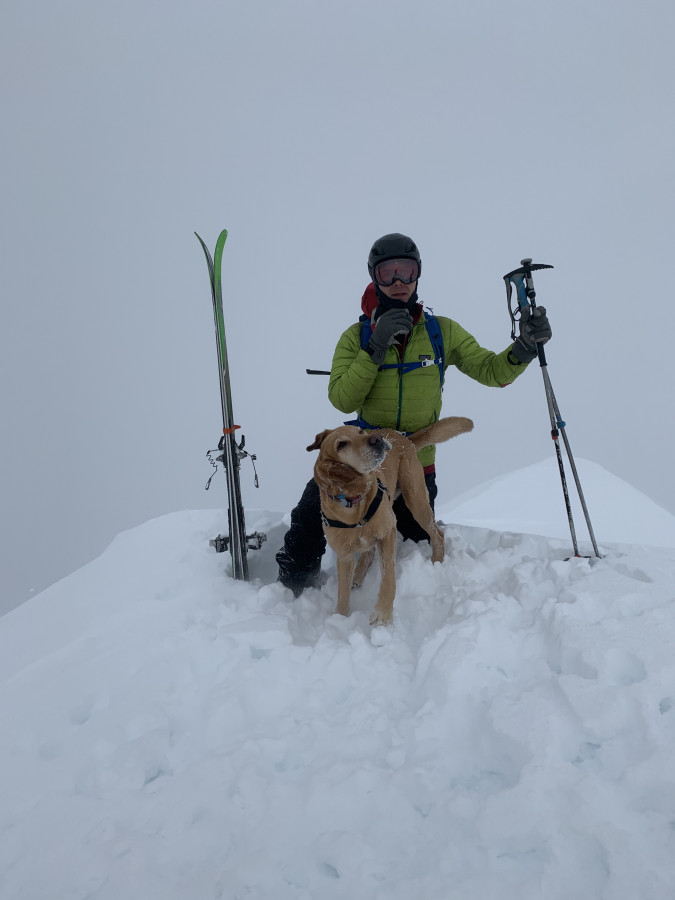 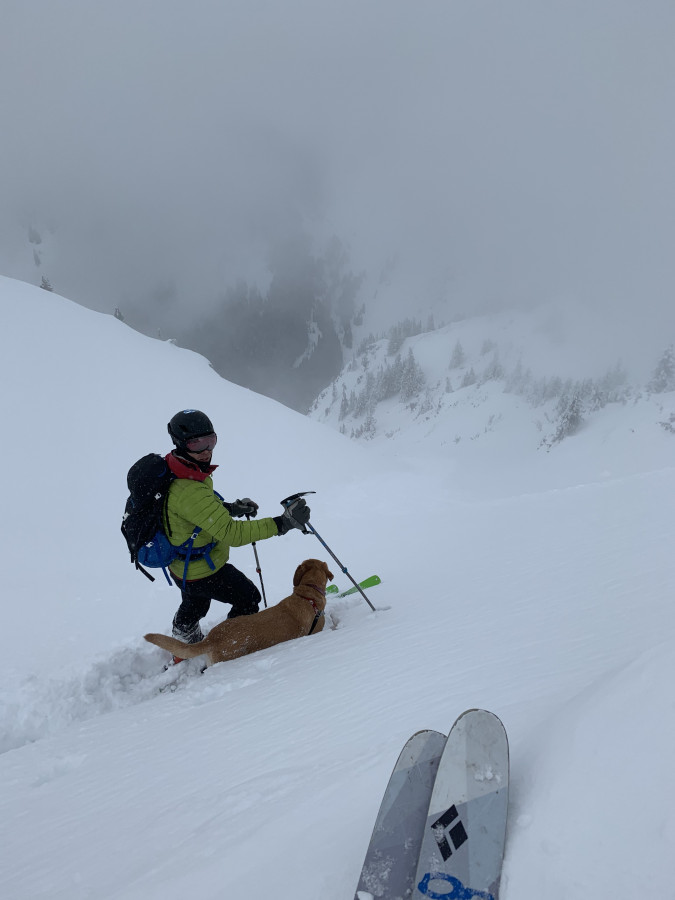 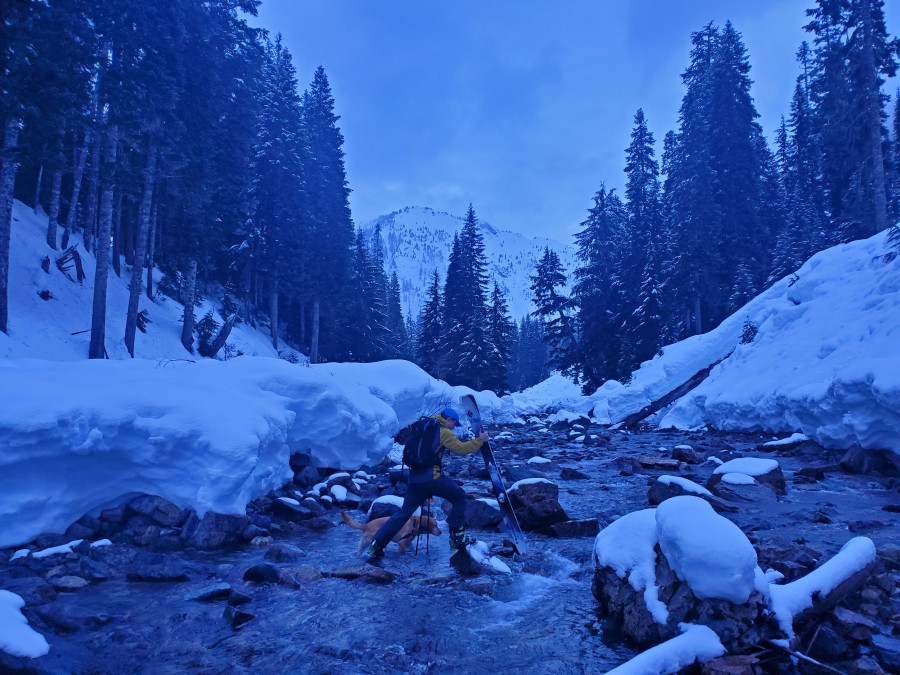 Dang! Super solid effort, especially for Charlie! That first creek crossing photo looks spicy, is that the one at 3700 you mention? Also, do you know what elevation you started contouring north, above the west couloir?

Hell yeah! Looks like a great adventure and some sick pow 😍 Nice work!!

@eatskisleep, yes, I believe the first creek crossing photo is the one from 3700´ on the SW face, although there were a couple others like it on the way out Gold Creek! Not sure what elevation we started contouring, but it´s a pretty clean break between a big, wide-open slope with a moderate pitch above, and very constricted, cliffy terrain below. If I had to guess I´d say around 5600´.

Awesome trip! Sounds like fun :) Way to get after it.

Gnarly gnar bar doggie dar! Good thing his pawz didn't get too frozen in all those creek crossings.

I've wanted to check that out in winter, maybe do a big horseshoe loop back through Alaska & Kendall... probably not as a day trip, though!

It would be cool to see a track of how you gained Alta from Gold creek, I was contemplating going over Rampart ridge but it sounds like you found a direct way?

Nice trip report and dog. Is that a Goldador? Ours (5 years) looks just like Charlie and she loves to go on ski tours. Maybe they are siblings? 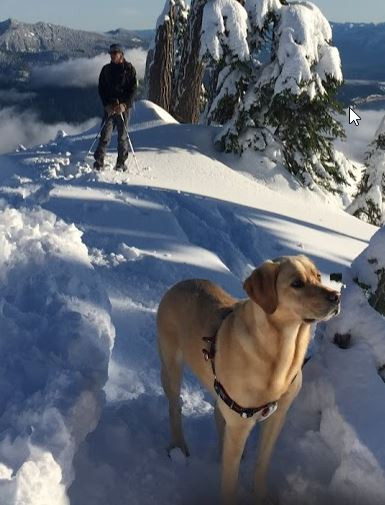 Fantastic effort and adventure!  Brings back memories.  Before posting a GPS track, I'd ask you to reflect on how your overall experience on this trip would have changed if you had a detailed route description (or skin track) to follow.  My experience 12 years ago was certainly enhanced by the complete lack of knowledge about a viable ski route, as I'd guess yours was too, based on your report.

For reference here is the 6 sentence report from 2009: https://turns-all-year.com/trip-reports/february-21-2009-alta-traverse

@joa: Charlie is a yellow lab, but people always think he´s mixed due to his unusual color and huge paws!

@kamtron: Sorry, no GPS track, I´m old school. Our route definitely seems preferable to going up Rampart and traversing the whole ridgeline, although that could be nice on a clear day.

@ski_photomatt: That´s the one! Thanks for the stoke. I would agree that ski mountaineering is most enjoyable when it´s more art than science.

Cool TR, ,Looked at north and west aspects for a while, great job, Video with charlie getting ear shots is great!

Great report, adventure.  Since I'm looking for a new furry buddy, Charley & Marly have put a yellow lab at the front of the list.  For less spicy adventure, would descending in the vicinity of your up track be as fun? Cheers!

@gerryh it would actually be pretty good with the right snow. I think an ideal day would be to ski the South-West face from the top and traverse skiers left back to the trees, where you could meet the up-track. Otherwise skiing the ridge back down to the up-track would still be enjoyable.

Rad. hope that puppers got a good victory bone for that one...I have done some big days with my doggo and the bond that forms on days like that is indescribable for me. Id love to know what is going on in my dogs head when we go on big mountain missions. Thats a good boy Charlie

also..."ski mountaineering is most enjoyable when it´s more art than science" good to see people out there not depended on the internets for adventure! getting lost is the fun part!