On Saturday, July 18, Kam, Reed and myself climbed Sherman Peak via the Squak Glacier approach, and skied Sherman Peak via its NE face. This was a line we had scoped during a run on the Park Headwall the week prior, as well as on a descent of the Talum Glacier two years ago. We don’t know of any other descents of it, but it is a high-traffic area so not making any claims either. It is a beautiful line of descent, though it is complicated by a bergshrund and the potential for significant/catastrophic things to come spewing out of the volcanic crater whose rim you’re jobbing. The snow was slightly softer than the week before on the Park but still skied wonderfully. Once across the bergschrund and off the face, we continued down the Boulder Glacier to around 6,000’ where we crossed back to the lower Talum Glacier. We considered ending the day there and taking a low traverse back towards Cragview, but we decided to see what else we could add to the day with the gas we had left in the (isobutane jetboil) tank.

So we put the skins on and made a long, slowly ascending westward traverse, finally regaining the track on the Squak at about 8,400’. We were getting pretty sluggish by that time, but were hoping that perhaps by late afternoon, some of the slopes might begin to cool and offer better skiing, so we were in no rush and took a couple breaks and a nap before finally arriving back to the crater rim. By that point we had done around 10,200’ of climbing, and Reed decided he’d hang by the crater rim while Kam and I went for the top. Halfway up the Roman Wall we bumped into Amar and his group. Hi guys! Their late schedule and conscientious descent left us a really nice skin track - it would have been brutal without it, as the snow on Roman Wall was very rotten and punchy, even on skis. Kam and I topped out around 545pm on the “Snow Dome” summit, having been on Grant Peak the week prior and thinking the Snow Dome looked higher. Sure enough, from Snow Dome, it was Grant Peak‘s turn to look higher. Whatever. With around 11,500’ of net gain on the day (a personal record for both of us), we were ready to put the skins away in the bottom of the pack this time.

Dreams of firnspiegel on the Roman Wall were wildly delusional - it was hot, wet and punchy. Not too sticky though, so still plenty of fun. We reconvened with Reed at the Crater and ripped the fuck out of the next howevermany thousands of feet the Squak is. From about 10,500’ down to 7,500’ is the sweet spot. There’s legitimate corn in the top third of that band, a mix of corn and adolescent suncups in the middle, and worsening suncups the lower you get. Might as well just plan on hiking all the way up to at least 6,000’ if you’re heading that way, we were able to ski a few hundred feet lower, but only on discontinuous, rapidly melting patches.

Thanks to a fun team, the volcano for not erupting or climax avalanching, and the kind woman who gave us AN ENTIRE MOD PIZZA in the parking lot! It was as though we manifested it, as we’d gone on for what seemed like hours during the day about how “MOD is right on the way home and is actually pretty good.” And that was all she wrote... Well except for Kam, whose head-nodding trip home was even further delayed by a flat tire.

Sherman from Boulder Ridge a week prior. 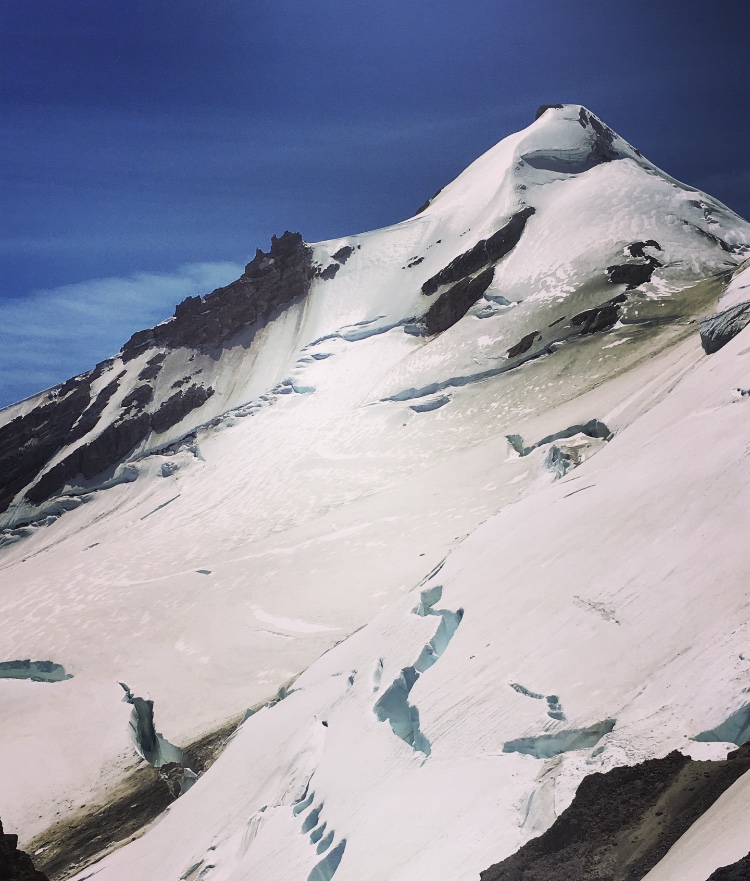 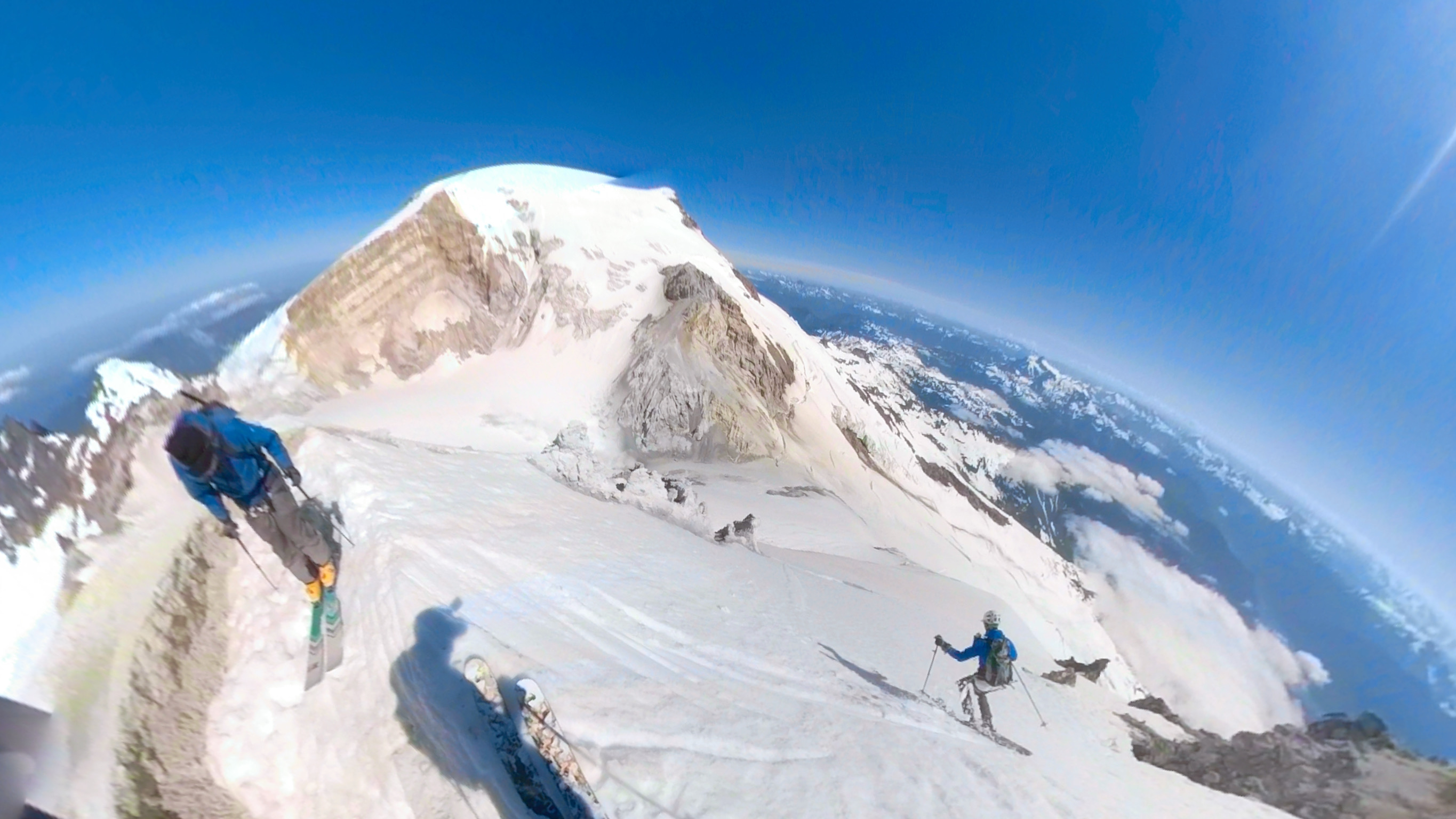 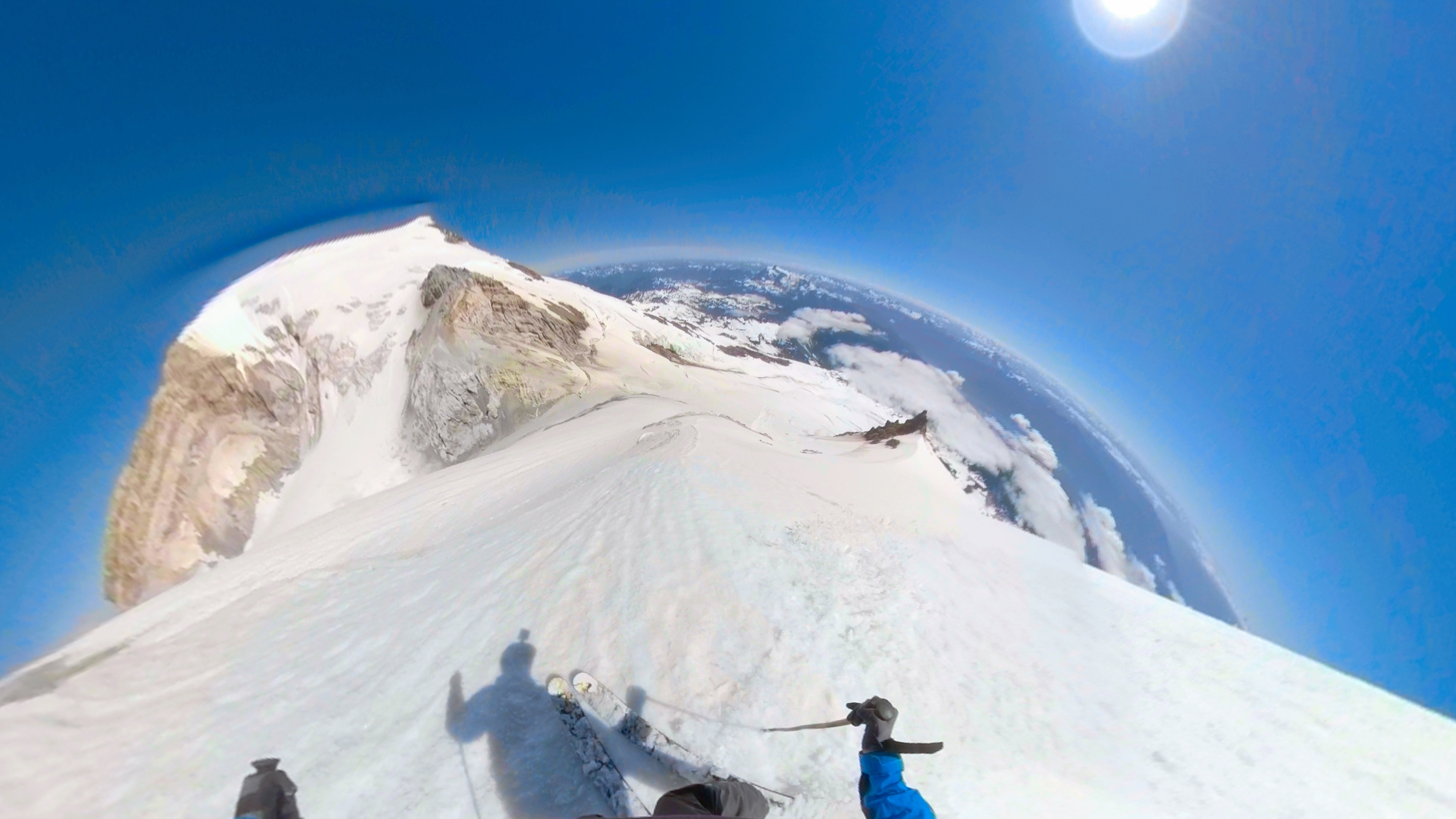 Gotta get out of here man. 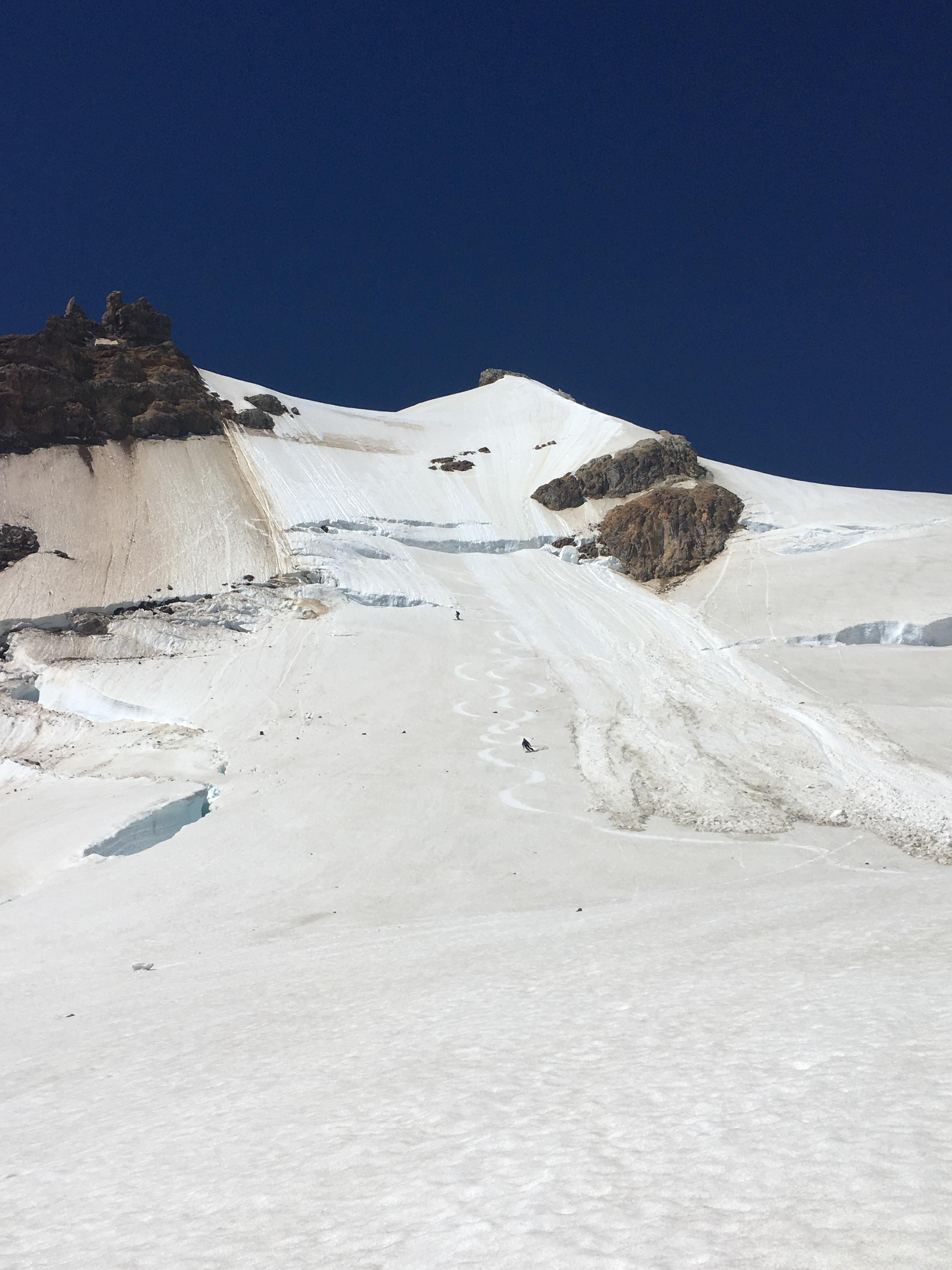 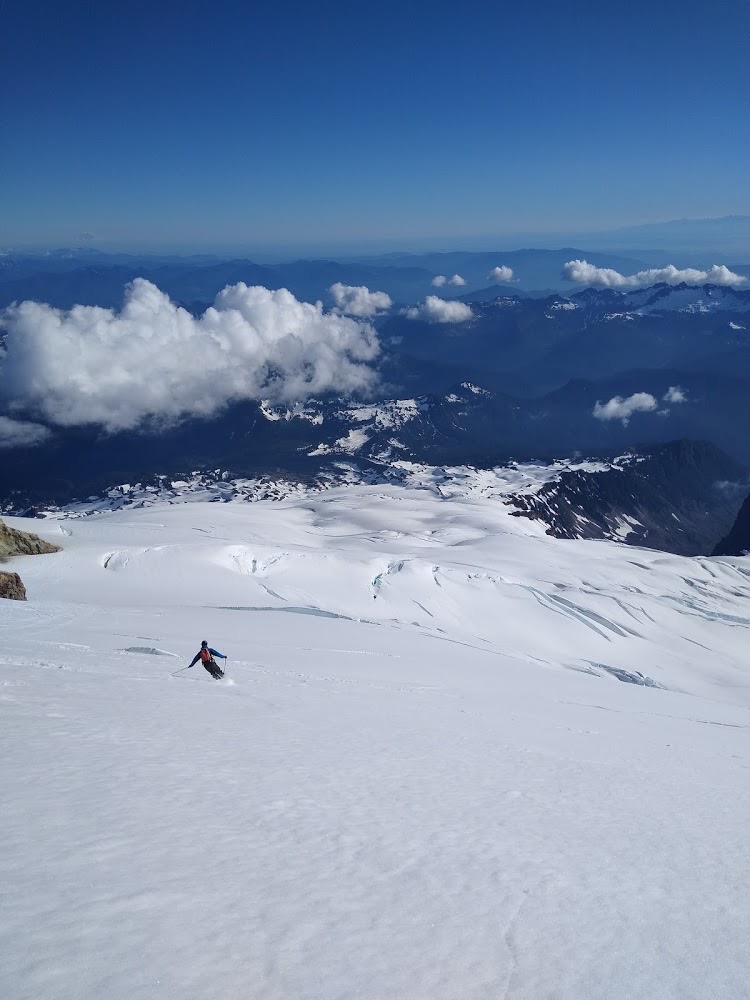 I don't know how your line would be same as or different from Cyril and the Hummels.  It seems to have a party of three nature to its schmoozing.

Never had a MOD pizza.

Hi Sky, I think that's the same line. Jason's picture is very similar to the views I had mid-slope.

What a blast! Here are some more photos.

Drew skiing the spine skier's left of the NE face 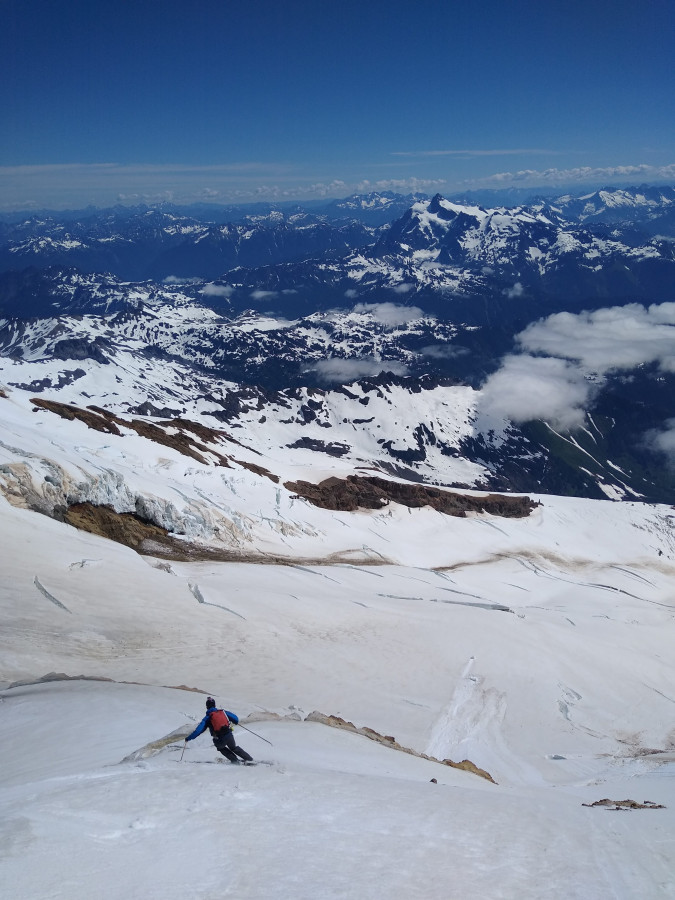 Reed ripping below the schrund 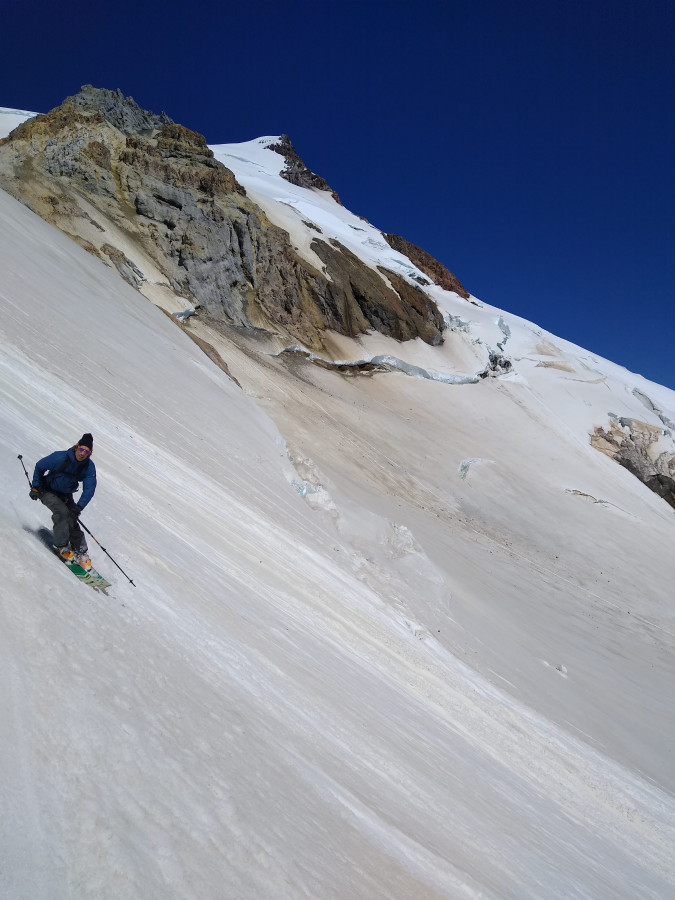 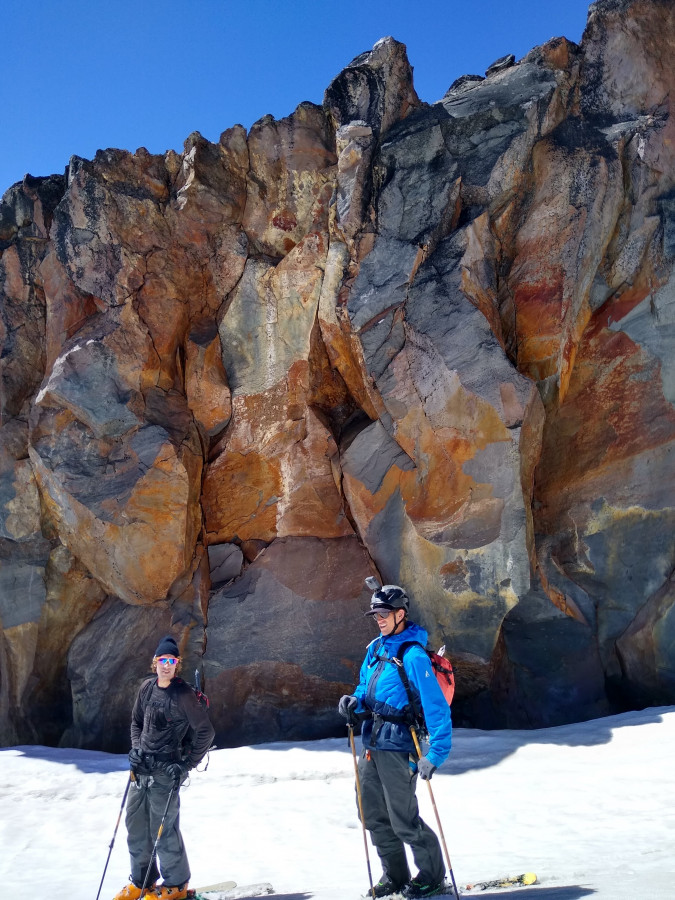 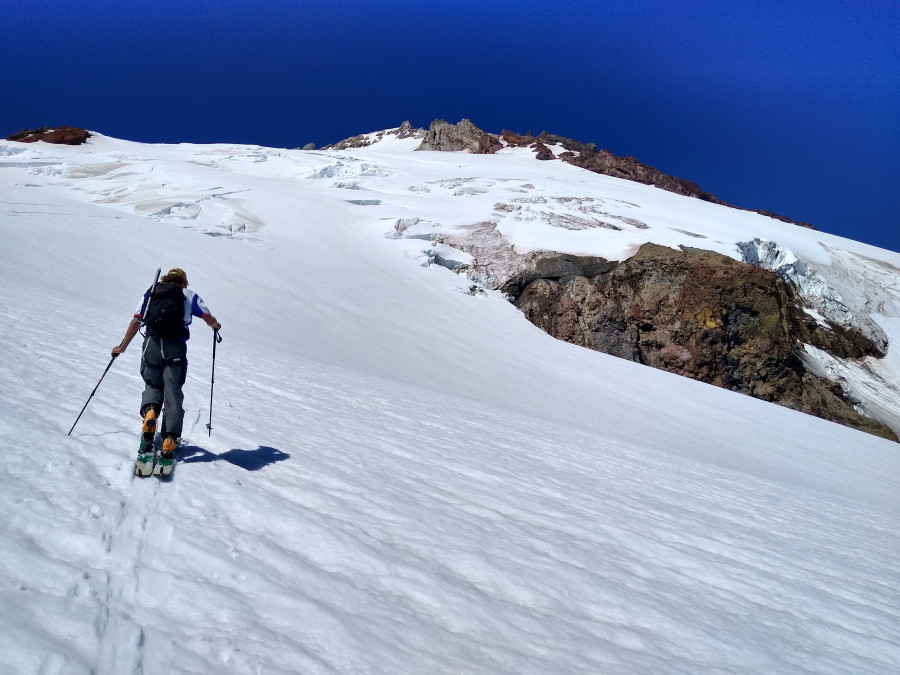 We returned from the Talum glaciers to the ~8400' level of the normal Squak route via a scenic, mellow ascending traverse.

Yes!  That photo of Reed looking at the camera is killing me, love it, reminds me of LeBron when he went off against the Bobcats and locked eyes with Jordan during an emphatic dunk.  Nah mean?

Somebody please forward Drew's images to the flat earthers, that outta fix 'em.

Also, I love that this was climbed and skied by the Hummels & co. essentially on accident. Classic Hummel approach.

Cyril probably just tricked them into it.  He's wily.

A large day in the business. Good work, men.

Was it one of you guys who took pics of the huge shit that Sherman blasted all the way down the Boulder Gl, within the last couple years maybe? The current image layer shows something similar... not sure if it's the same event, but regardless, I'd be thankful as well to make tracks in there without getting creamed. 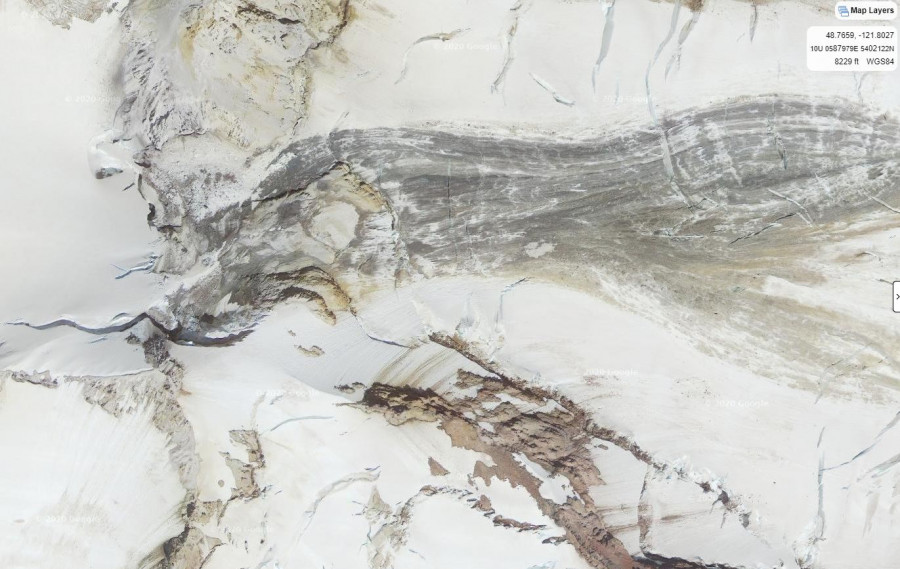 It's amazing how that face on Sherman Peak loads up with snow and ice and becomes a good ski run, then collapses a few years later. Will it happen again?

Skied the Talum on Sherman on July 19, it was great! Mostly smoothish corn till the top couple hundred feet that were a little dirty and rocky. We didn’t quite summit cause there was a schrund/most across the face, still navigable but we didn’t feel like messing with it late on a hot day. 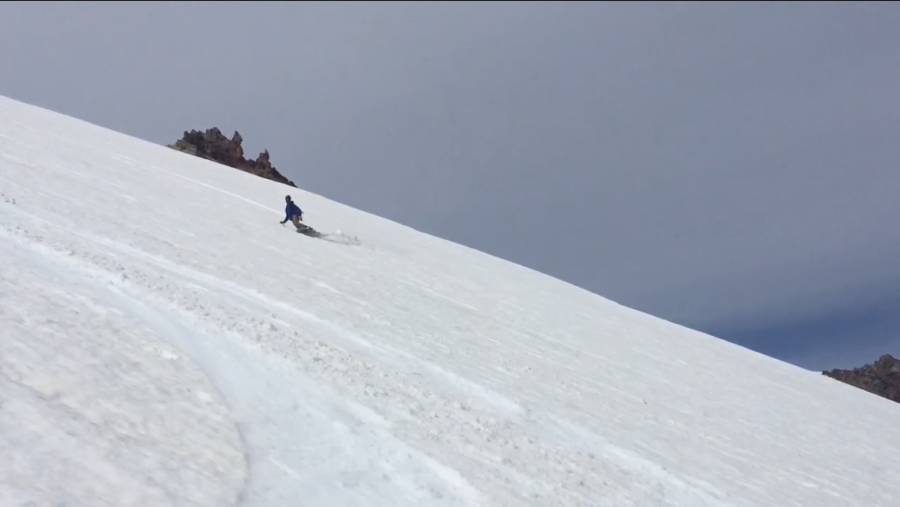 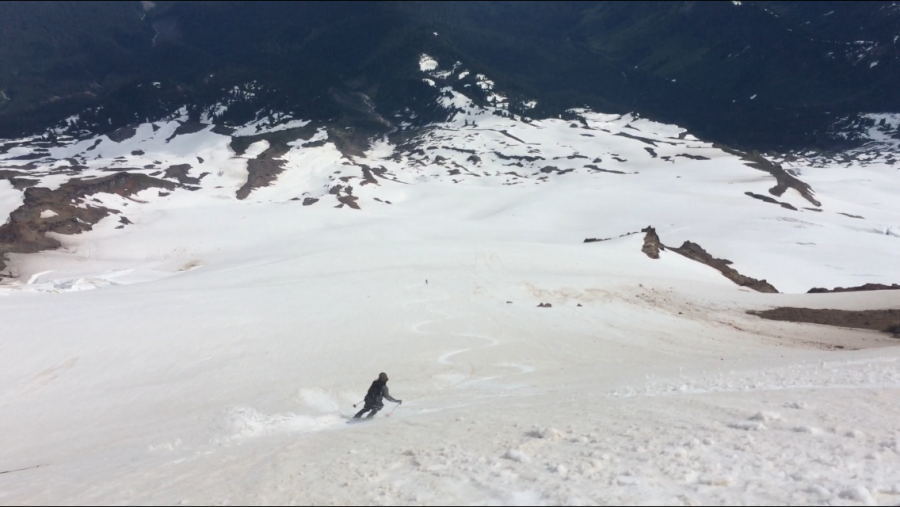 Nice shots, Jacob! We saw your tracks on Tuesday and wondered where they came from. So it sounds like you ascended the Talum as well? It's pretty straightforward to gain Sherman peak from the regular Squak route and ski it top-down since you can scope it on the up. For next time.

Yeah we ascended the Talum, we thought about going up the Squak, but decided the Talum seemed more direct. I’ll try that way next time! Lots of good skiing to be had around there!

Kameron, thank you for posting that banger! I never expected TAY to help introduce me to new hiphop...😌