11/30/08
WA Cascades West Slopes South (Mt Rainier)
50509
9
Posted by Amar Andalkar on 12/3/08 3:26pm
In this mostly snowless November of 2008, worthwhile ski options seem to be limited. Muir was great on the 23rd, but hundreds of others felt so too and the lovely powder was quickly tracked out and then wind-hammered a few days later. Maybe it was time to look a bit farther south . . . to the vast south-facing slopes of Mount Adams, the 12276 ft monarch of the south Washington Cascades. The forecast for the area looked perfect for harvesting autumn corn: SUNDAY...MOSTLY SUNNY. FREE AIR FREEZING LEVEL 11000 FEET.

Hannah and Dave Brown joined me for the drive down on Saturday evening, taking the shortcut via FR 23 from Randle to Trout Lake to save about 100 miles. But it wasn't worth it: on the 12-mile-long gravel section, 3-4" of slushy snow covered the road above 4000 ft near Babyshoe Pass, making driving conditions treacherous even in 4WD. Then after the pavement resumed south of the pass, there were occasional sudden icy-snowy sections which caused much anxiety, and we were quite relieved to safely reach Trout Lake. We decided to continue on south to Hood River and enjoyed a fine dinner and three slices of chocolate cake at the

Looking south at Mount Hood beneath a mackerel sky.

The next morning, we hit the trail just after sunrise at 7:40am, and hiked all the way to 8400 ft on the trail just west of the Crescent Glacier. A couple of us then switched to skins, and made it up to about 10100 ft on the South Spur, before the steepening slope and still-firm snow forced a switch to kicking steps up the face. A pair of Europeans continued skinning higher up the face, but their progress was slow and we soon left them far below. The upper portion remained solidly frozen, since the sun was partially obscured by high clouds, making things a bit dicey for the one of us who had chosen not to bring crampons. But we soon topped out on 11600 ft Pikers Peak by 12:30pm without mishap.


After a brief pause, we quickly continued on across the saddle towards the true summit, crossing extensive fields of knee-high solidly frozen sastrugi. Nasty stuff, mostly clear water ice and rock-hard. Just after 1:30pm, we finally stood atop the heavily rimed summit shack, enjoying a fine view of Mount Rainier glowing in the sunshine. Winds were light and temps were in the mid-20s, quite pleasant. Another pair of skiers were just leaving the summit as we neared, with one skiing down and the other walking.

Although all three of us had carried skis to the summit, only two of us decided to stubbornly ski from the top of the shack, while the smart one headed back to Pikers Peak on foot. As expected, the skiing off the top was atrocious, with a hideous solidly-frozen bumpy surface in the best spots and knee-high fins of solid clear-ice sastrugi in most other areas. One of us ditched the skis after about 200 vert and the other toughed it out for 600 vert down to 11700 ft, but it just wasn't worth it and the risk of injury was too high. Back to crampons for the last bit down to the saddle and the short reascent to Pikers, where we rejoined our third and all donned our skis.


Unfortunately, the limited filtered sunshine had not been strong enough this day to soften the hard-frozen snow on the upper part of the South Spur. The first 1400 vert of descent were tough sliding, with each turn causing a pronounced high-frequency chattering vibration which penetrated through the soles of our boots and throughout the length of our bodies. The 30-degree slope was just steep enough to ensure extreme caution, as any slip might suddenly turn into a long slide. Then mercifully, around 10200 ft the snow rapidly softened into semi-decent corn, and fine turns were enjoyed by all on the lower portion of the face. We continued on down past Lunch Counter, on well-softened snow ideal for high-speed GS turns, grabbed our shoes at 8400 ft, and skied onto what's left of the nearly-vanished Crescent Glacier. Down the steep face, across about 10 ft of bare rocky ground, and then continuing down to the flats at 7400 ft, where we rejoined the trail and it definitely seemed prudent to put the skis away for the day.

The hike out was ABSOLUTELY STUNNING, as the high clouds which had prevented the snow from softening now repaid us by providing one of the most magnificent and colorful sunsets we had seen in a long time. Just after sunset, a

A great day out in the mountains with fine company and nice weather, about 6800 ft of total ascent for up to 4800 vert of skiing, with quality ranging broadly from totally atrocious to pretty fine. A great way to end a marginal November for skiing in the Northwest.

The first photo is Amar skinning with Hood in the background.

Third is Hannah testing her edges just below Piker's Peak 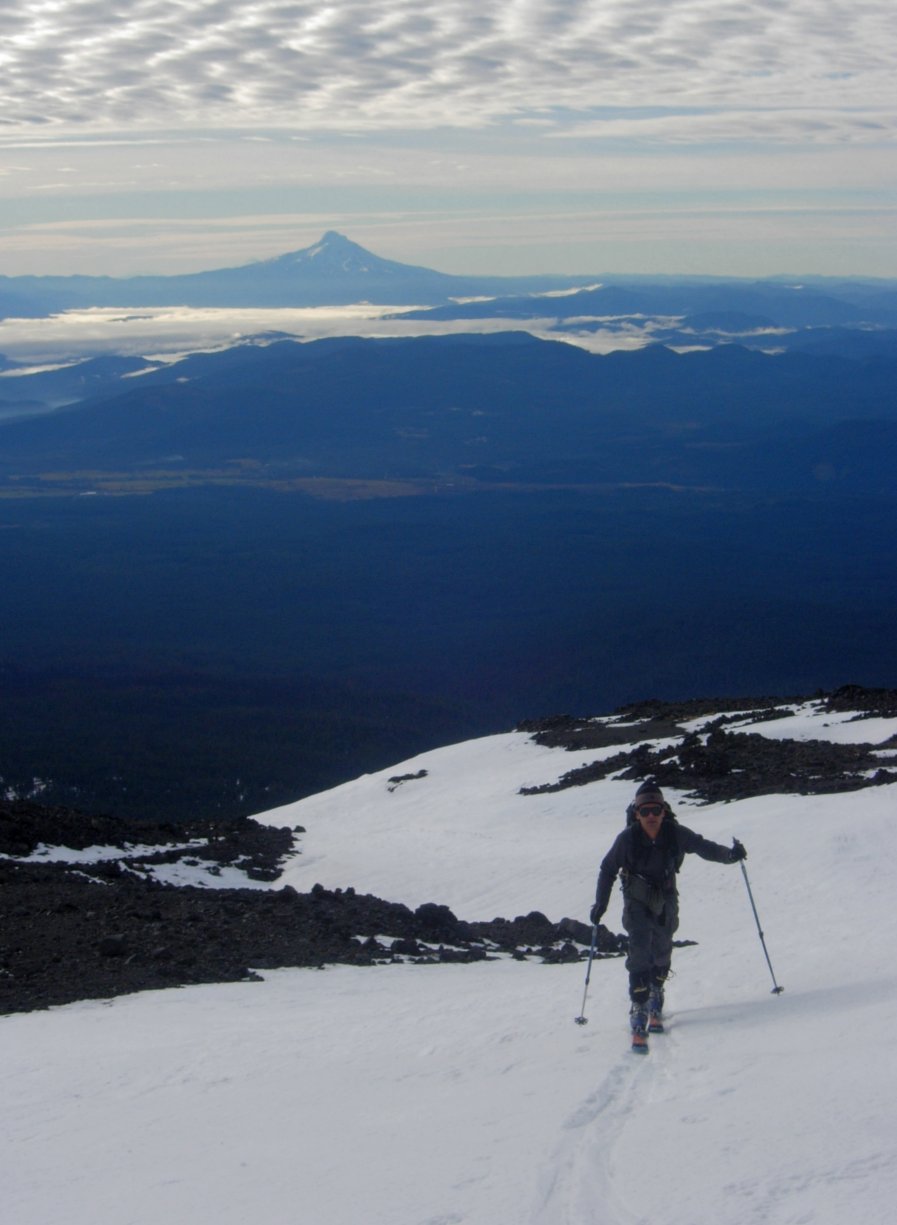 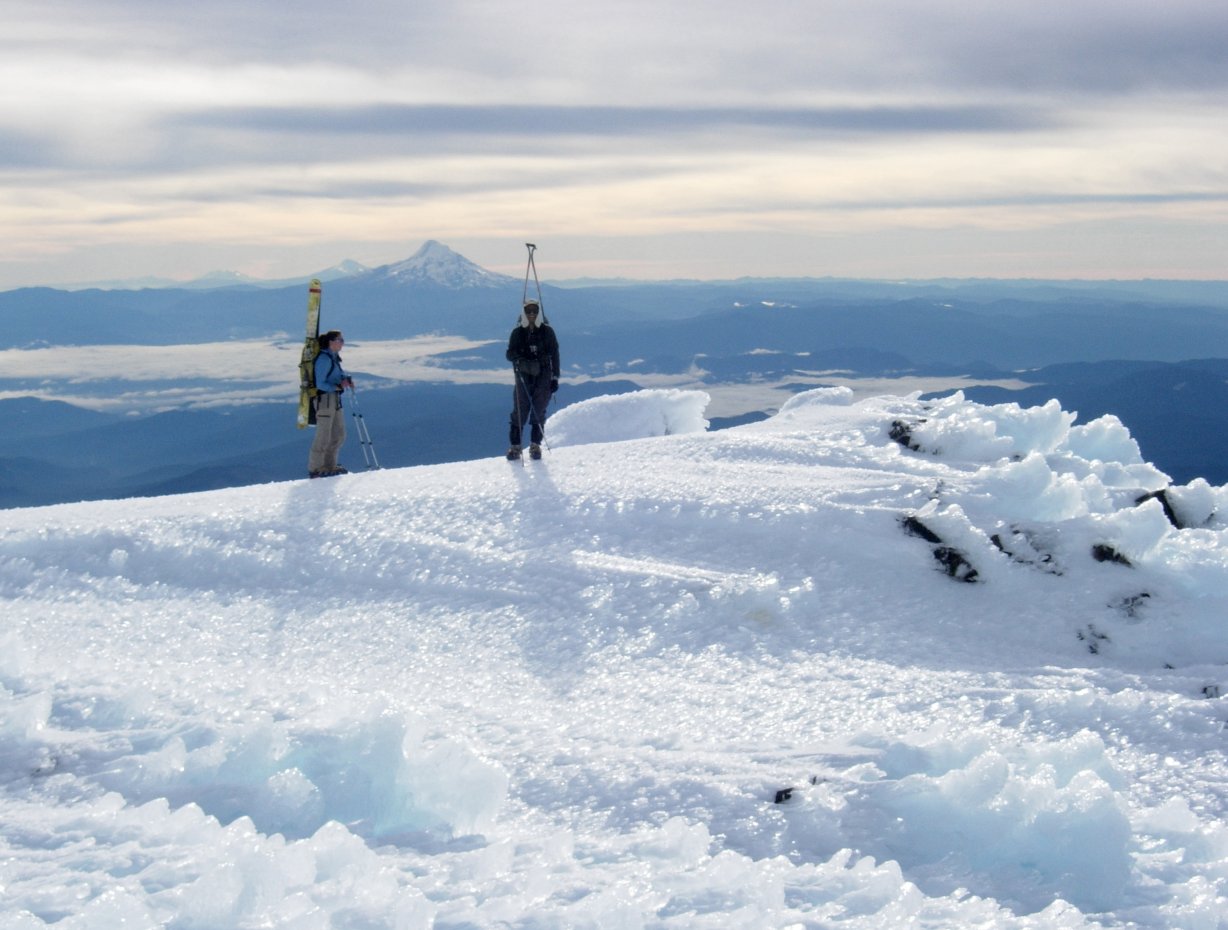 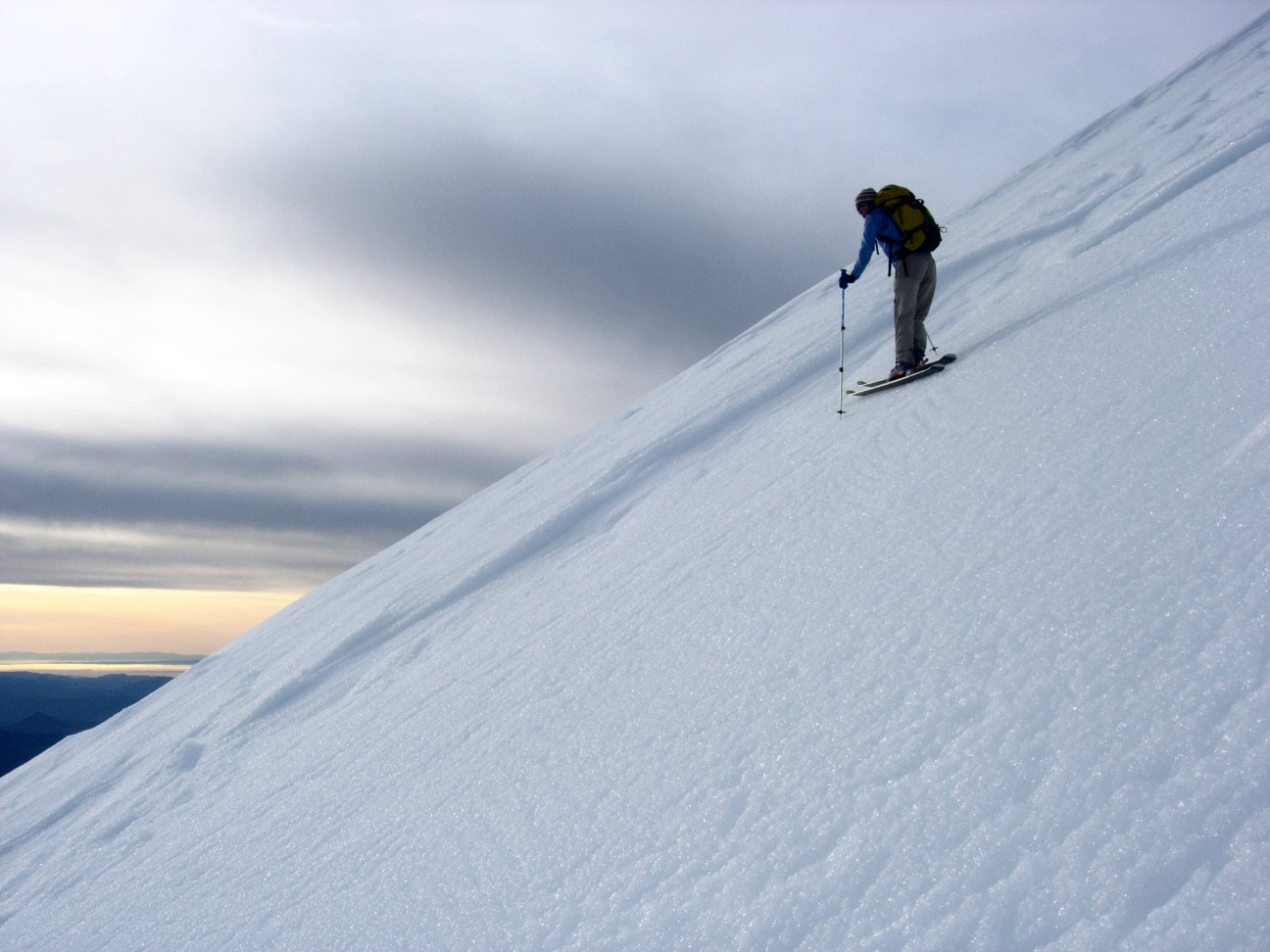 12/4/08 1:58am
skierlyles
Yes, agreed- nice TR. Glad you all made the most of a nominal november snowpack. Keep those great TR's coming.

Chris
12/4/08 10:34am
cl??ment-pernet
Hi Amar,
Thanks for your nice and detailed report. Veronika and I were the 2 skiers that you met near the summit. Nice seeing you guys up there, and I am glad that everyone went down fine on this tricky terrain.

We did a slow 2.5 days long trip to this summit, from friday afternoon to sunday which turned out to be a necessary given the poor conditions on saturday morning (high wind and rain), which prevented us from even attempting to summit that day. Instead we took our time and climbed up to Lunch Counter for an astonishing bivy.

I agree on your comments about the quality of the snow. At this point we are no longer speaking about snow, but ice: I did not see a patch of snow above lunch counter! On the way up, I was certain that there would be no way to ski down this terrain, but it finally worked out ok, considering a very conservative skiing style. Incredible vibrations throughout legs and backbone, almost a massage!

All in all, the scenery and the bivy's were spectacular enough to compensate the mediocre skiing!

Here are some of my pics:

Imagine that...  ;D  I was wondering if indeed the weather substantiated wearing a tank top.  I would not have thought it to be that warm this time of year.
Nice trip folks!  Well done.
12/5/08 3:07am
david_coleman
I think only Pandora & Amar understand the kind of skin showing I'm referring to, as well as a couple of others from that 'HOT' day on Baker.  HAHA
12/5/08 7:13am
jason_h.
Great trip guys!!! Your trip so much like ours to Adams a few weeks prior, but the ice sounds even worse. Ha. Still looks like good fun. Pics and all from everyone are great additions.
12/7/08 8:32am
charlie-hagedorn
Four of us skied the route the week before you guys, in possibly slightly better conditions. Three went to the summit, one had the good sense to spend the day harvesting powder lower on the mountain. The expanses of blue ice at the Lunch Counter were pretty impressive. One of us was able to make a complete go of it from summit to the base of the Crescent without clicking out, but the rimey traverse was far from pleasant. In addition, one of us took an eye-opening 1-200 vf sliding fall on the way down from Pikers on the boilerplate. Fortunately, the surface was just soft enough for him to arrest with his boots after ski release, otherwise he'd have slid ~1500'  to the Lunch Counter. Two others of us caught slips before they started with the combination of Whippets and ski edges. Snow below the Lunch Counter was fun, turning to very good in the windloaded bowl of the Crescent. Fun day, beautiful sunrise.

Lesson: Don't assume your partners know how to arrest on skis. Sometimes they don't.