I just got home from an incredible month-long road trip around the Northern Rockies where I went from winter in Montana to spring in the Tetons & Sawtooths to summer in Oregon, skied 5 of the 50 Classic Descents plus countless other lines, climbed more than my legs care to remember, and met and skied with some awesome people. I left Seattle with a very rough plan to spend a week in Cooke City, a week in the Tetons, a week in the Sawtooths and a week in the Oregon volcanoes, skiing 4-5 days in each zone and resting or waiting out bad weather on the other days. Since the weather was perfect virtually the entire month, everything went according to plan for once – well, almost everything. If it wasn’t for Covid I probably would have been out of the country this year. Instead I’m feeling grateful that my hand was forced into giving these zones the attention they deserve. Details as follows…

In Cooke City I was blessed with a week of cold, dry snow and untracked lines in all directions. The prevailing wisdom is that you need a snowmobile to get the goods in Cooke City – this is wrong! I spent 3 days skiing the mountains on the edge of town – Republic and The Fin. I skied 4 different couloirs on Republic – two that drop right from the summit in different directions, and two more that drop from the E ridge – plus the main face of The Fin. All aspects were skiing well and I felt like I had the place to myself. It’s hard to imagine another place where you could ski 2500’ north-facing fall lines straight down to the car, in perfect powder, and not share the mountain with a single other person for 3 days.

On the weekend some friends from Bozeman came to join me, we headed up into the heart of the Beartooths and climbed and skied the Central Couloir on Glacier Peak. This was a full-value day that involved 12 miles of sled towing, 6 miles of skinning, and several thousand feet of booting to get to the summit. Then we got to do it all in reverse. We skied a pretty big line that day but the scariest part by far was being towed downhill behind the sled on the way out! On my last day in Cooke City I skied the N Couloir of Abiathar Peak in Yellowstone NP. Abiathar is one of the most aesthetic mountains anywhere, and while the snow in the couloir was severely wind-affected and not as good as the other lines I’d skied earlier in the week, the scenery was more than enough to compensate.

My arrival in Jackson kicked off a week of blue skies and warm weather. It was game on in the Tetons and everything got skied that week. I was really impressed by the level of talent, both from the local skiers as well as those visiting from elsewhere. At the main winter trailhead in Grand Teton NP I could spend 5 minutes chatting with someone who had just come off the mountain, make an ambitious plan for the next day, and have 100% confidence that they would be a capable partner. This happened more than once.

Not wanting to let the weather window go to waste, I spent my first 3 days summiting and skiing 3 of the big Teton peaks over 12,000’ (Middle Teton, Teewinot, Moran). After a much-needed rest day in Jackson I was back at it, and on my last 2 days in the park I skied the East Face of Mt Wister and the Sliver Couloir on Nez Perce. The last day on the Sliver a storm was rolling in and the snow didn’t soften up at all. In fact it was comically bad. The couloir, which is steep, narrow, and sustained enough to be intimidating in firm snow conditions, had been thoroughly skied out over the previous days, baked by the sun and refrozen. Fortunately everyone in my group was a rockstar, so we were able to laugh our way down, and eventually found some corn on the exit.

After 5 big days in Grand Teton NP it was pretty cool to be able to look up at the Teton skyline from any point along the park road and note all the amazing peaks and lines I had covered in such a short time.

I think of the Sawtooths as the quiet cousin of the Tetons. Without a ski resort, a national park or even an organic gluten-free brewery, Stanley gets overlooked as a ski destination, but the terrain and access are just as rad as anything around Jackson. And free roadside hot springs make rest days the best days! I began my week in the Sawtooths by skiing the north-facing couloirs on McGown and Horstmann with some cool people from Boise. At this point the snow was very old. But not old like a bottle of fine wine. More like a bottle of spoiled milk.

My favorite day in the Sawtooths was skiing the South face of Williams Peak with my dog Charlie. Over the past few years my ski objectives have gotten more ambitious and often take me to places that present legal or physical barriers for even the most capable dog. During this time Charlie has aged - he can still charge but now needs more recovery time after a big day. As a result, he doesn’t get out touring with me as much as before, but he’s still my favorite ski partner and I treasure the days we spend together in the mountains. With a reasonable approach, a nice 40 degree pitch and a perfect corn cycle on tap for the day, this was the perfect tour for Charlie. Afterwards I learned it was National Pet Day, so it’s a good thing I didn’t leave him in the van.

On my last day in the Sawtooths I did a circumnavigation + summit of Thompson Peak, the highest in the range. The last entry in the summit register was a group from an AMGA guides course who had been up there nearly a month earlier! That’s Idaho in a nutshell.

Greg flew in to Bend to join me for the last leg of the trip. We headed up to the 3 Sisters area and promptly got my van stuck in soft snow hanging off the road at an angle that made cooking and sleeping difficult. The next morning we made our way on foot toward North & Middle Sisters, planning a linkup of both. On the approach to North Sister we spotted a line that looked skiable from the summit, but by the time we had climbed the E face and reached the summit ridge it was completely socked in. So we transitioned at about 9300’ where the E, SE & S faces all converge and skied the S face in very firm conditions. We then booted up the icy N Ridge of Middle Sister, spent a few minutes on the summit admiring volcano alley in between passing clouds, and skied the E Couloir which was quite spectacular. From the base of Middle Sister it was easy to traverse back to the trailhead, completing a nice circuit.

Mt Jefferson was one of the best descents not only on this trip, but from my whole season. We skied what must be the longest descent in Oregon, straight down the W face from 10,300’ at the base of the summit block to 4000’ where the Milk Creek drainage flattens out. It was big, aesthetic, varied, and the snow was consistently good for 6000’. What’s not to love? To top it off, the exit felt like a scene straight out of The Lost World.

We spent our last day in Oregon skiing what I’ll call the “Newton Clark Headwall Plus” on Mt Hood as Mother Nature served up one more perfect day. On our way up the Wy’east Face we spotted what I believe to be the original entrance chute used by Sylvain Saudan during the first descent of the Newton Clark Headwall in 1971, but not often skiable these days. When filled in it provides a direct route to ski straight from the summit into the Newton Clark Headwall with no transitions. In honor of the 50th anniversary of the first descent, we chose to forego the standard Newton Clark entrance and attempt to pick our way down Saudan’s route. After a rollover we entered a cruxy section where rappel gear certainly would have been useful. I’m sure this feature has a name, but until someone can point it out to us Greg and I are calling it Jamrock Chute. Why Jamrock? I could tell you all about how it involved strippers, broken goggles and a fall over an ice cliff, but I think I’ll just say that you had to be there.

Thanks to the those who accompanied me on one or more of the missions described here – Max, Garrett, Juhana, Nathaniel, Hunter, Ross, Jill, David, Chase, Greg, Ryan. One of the strongest memories from this trip will be the friends made along the way. And thanks to Charlie for waiting patiently in the van when he couldn’t join in the fun! 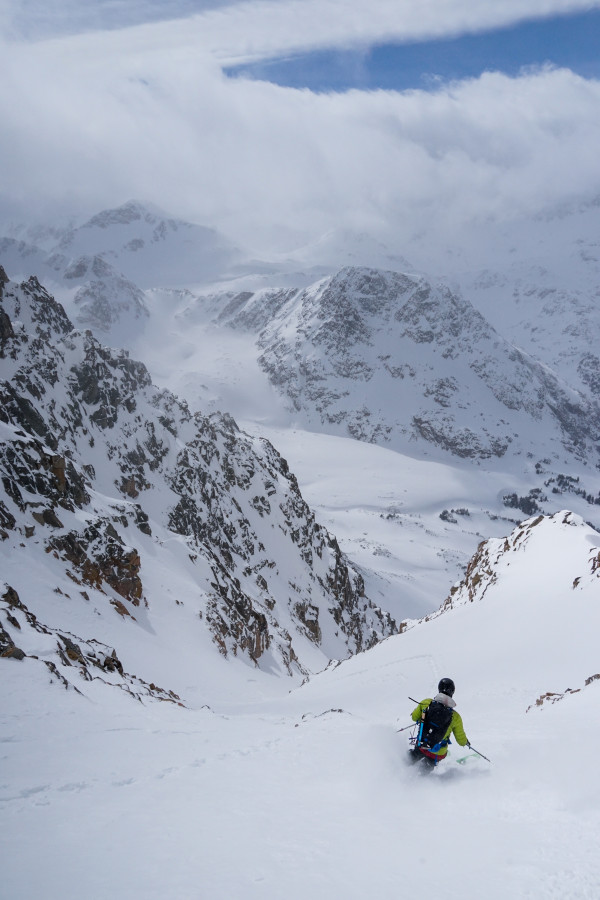 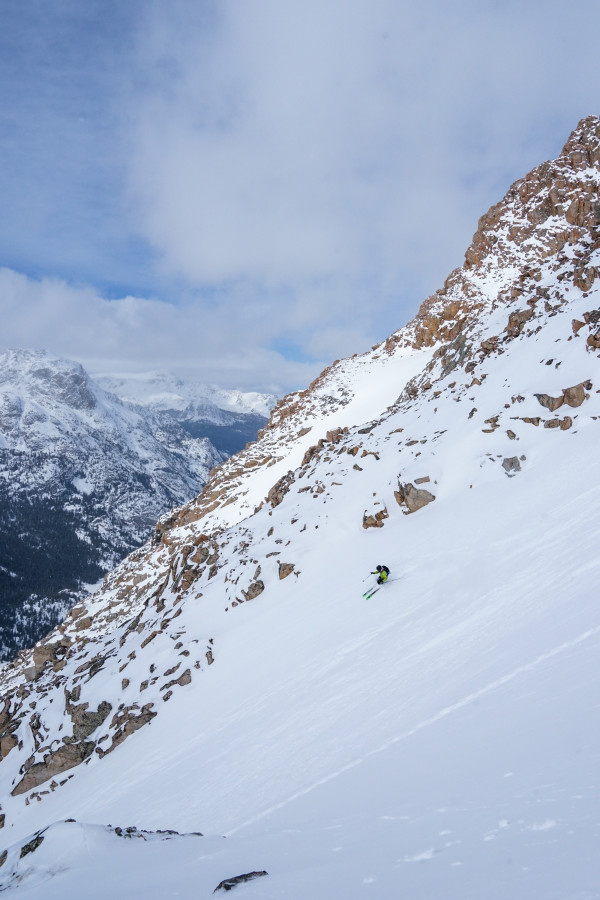 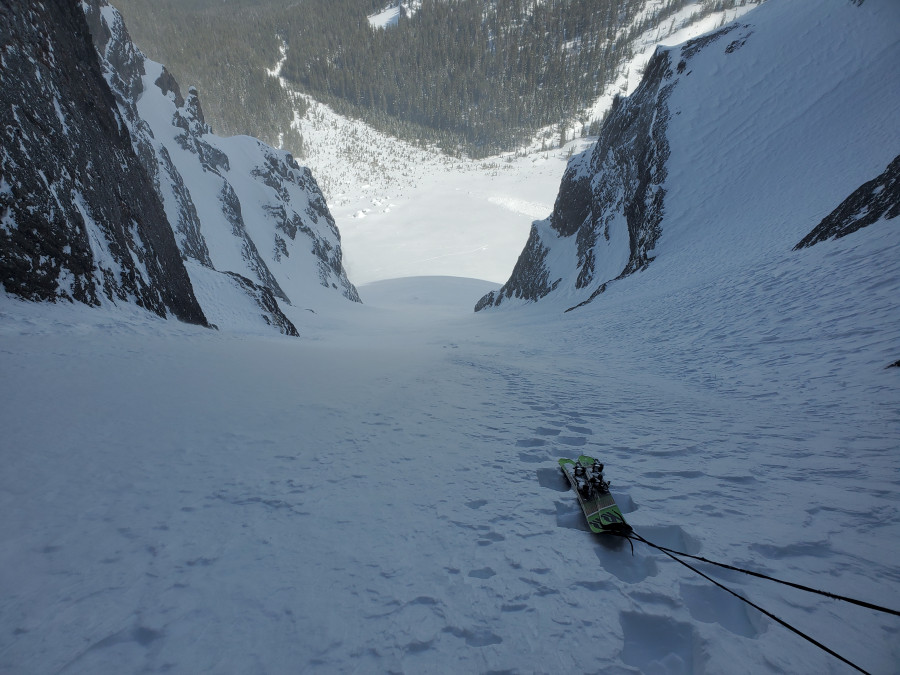 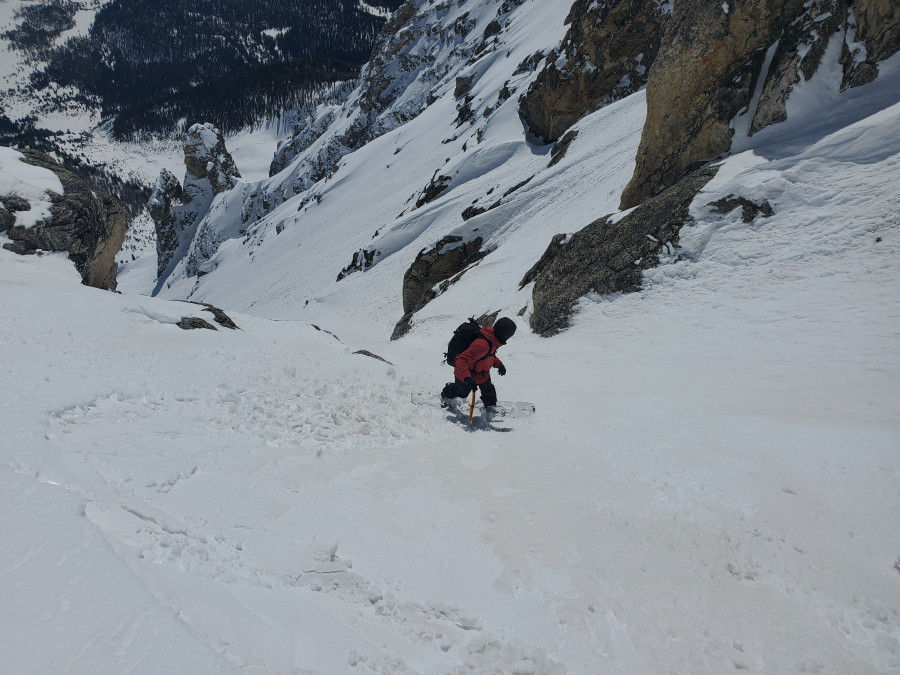 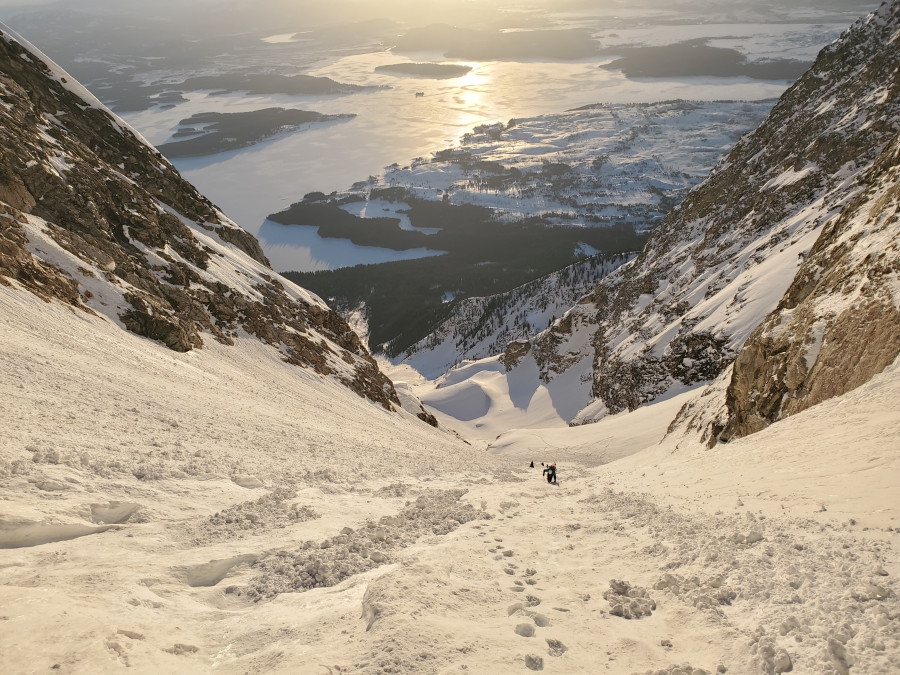 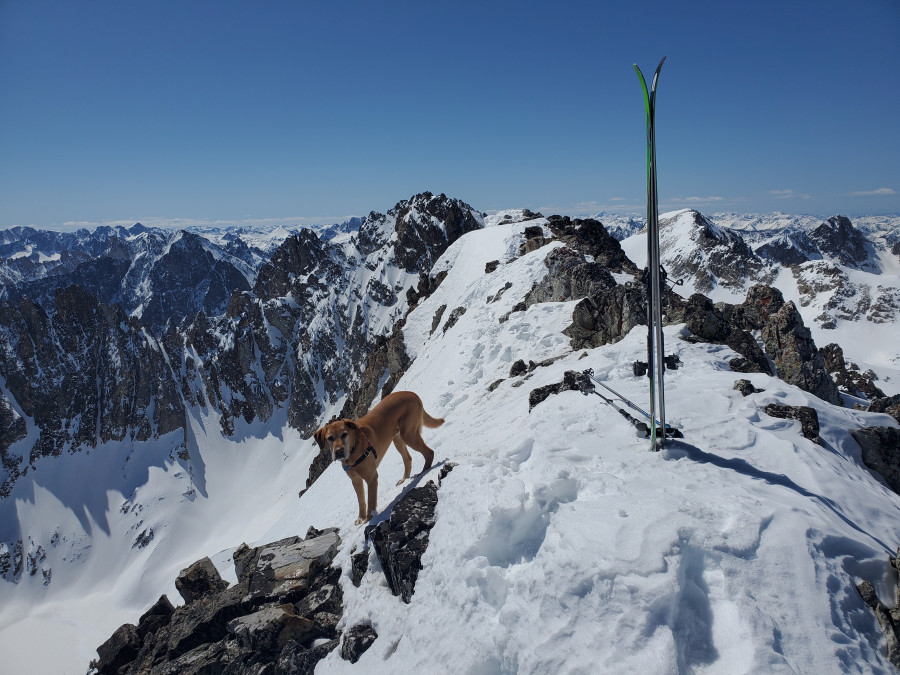 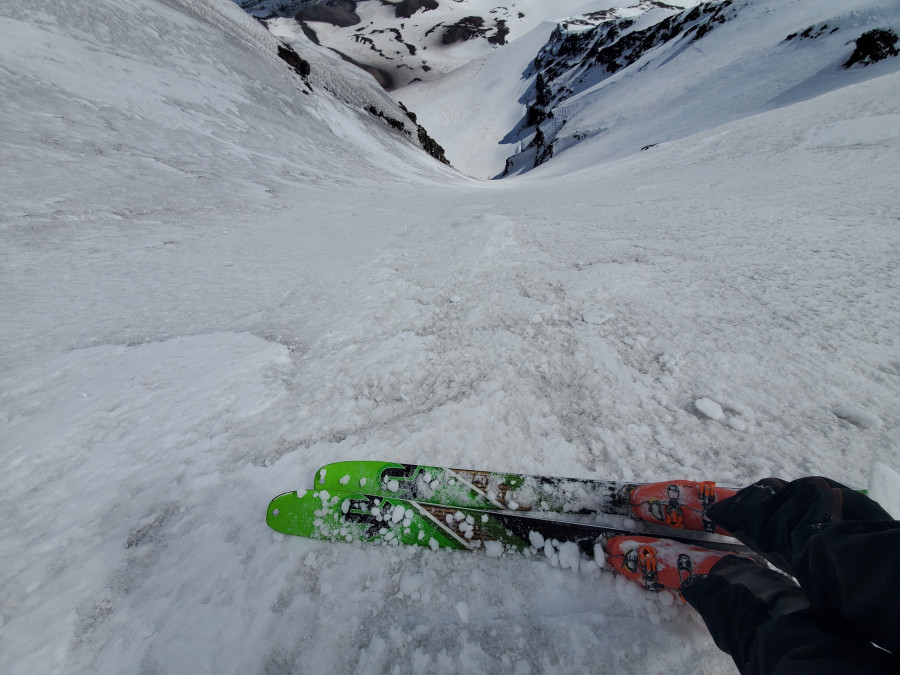 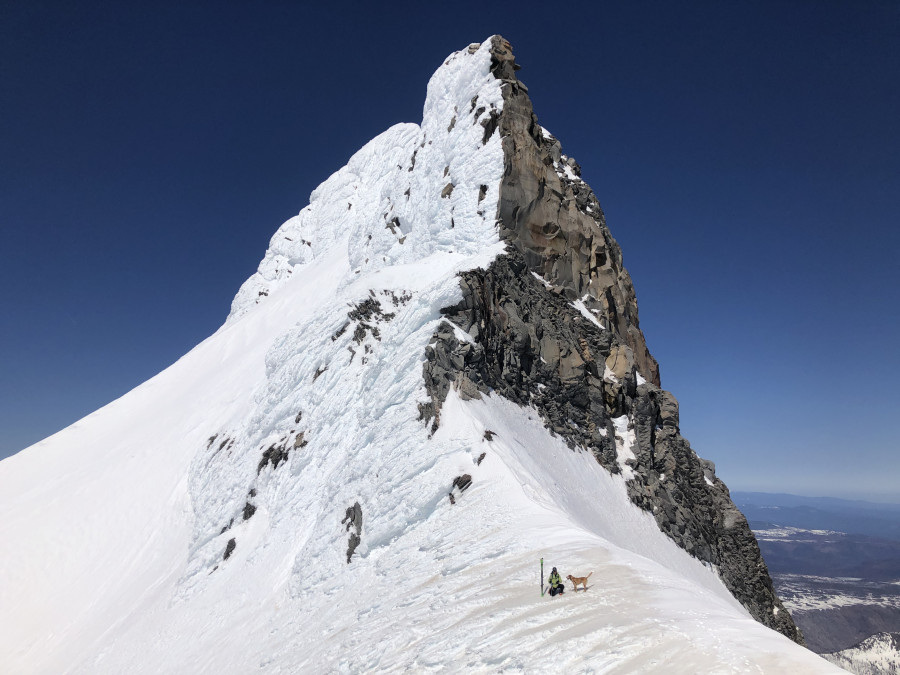 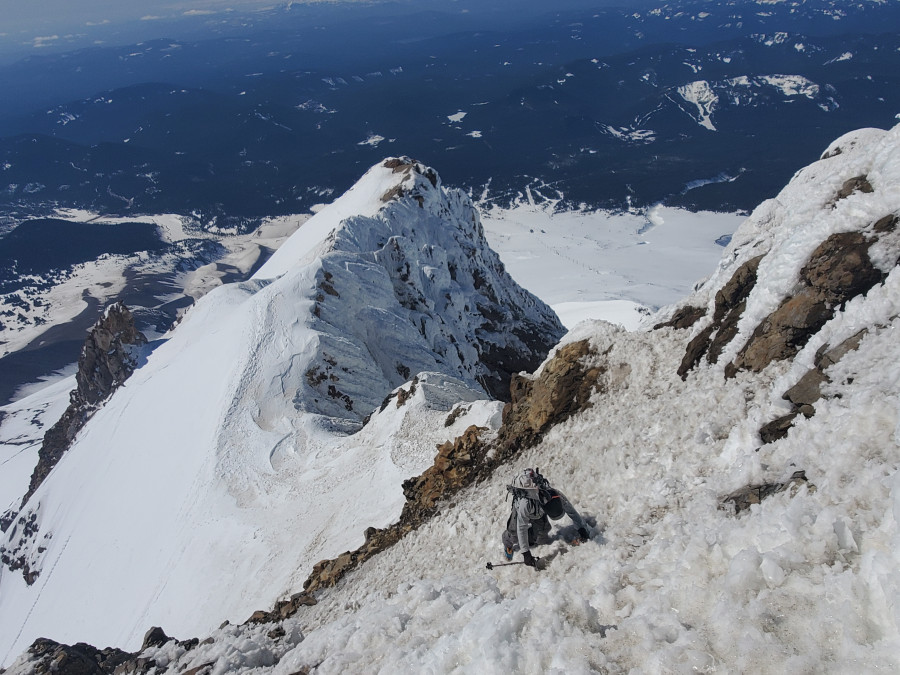 Thanks for posting. Very inspirational. (Like, I'm questioning my life choices now...)

Hell yeah that’s quite a tour of the west!

Next time save the hours of driving and just come on up to ANC 😉. Nice to hear the synopsis!

What's going on with the skis tethered in the bootpack?

@danthemtn-man it's a technique so cutting-edge that even the guides don't know about it! In all seriousness though, if you have holes in the tips of your skis give it a shot, you'll never want to make an A-frame again.