With abundant snowpack and an extended weather window in the forecast, on Monday I headed to the North Cascades with a vague idea of what I wanted to do, but very certain that it should include blue skies, summits, powder, and not returning home until the weather turned or my legs gave in. As the week progressed that evolved into a pretty ambitious plan to ski 4 big north faces (Ruby/Goat/Shuksan/Triad) over 4 days. Since the 3 routes that I was successful on had previously shut me down for different reasons, I’m calling this the Redemption Tour. Details as follows:

Tuesday, Ruby Mountain: 3 years ago my dog Charlie and I bailed halfway up Ruby due to a lack of early-season snowpack. On Tuesday Ryan Malinoski and I, plus Charlie, climbed and skied this peak that turned out to be the 50th tour I’ve done from the Volken guidebook. We followed the standard winter route up Happy Creek and were the first party to reach the summit during this weather window, but apparently it’s been quite busy since then. Ryan got into touring a couple years ago while I was working for him, but had never been to the North Cascades. Reaching the summit of Ruby and being surrounded by the sea of peaks was pretty eye-opening for him and I doubt it will be his last time up there! From the summit we retraced our ascent route for about 500’ then cut hard left below the summit block and skied a prominent, winding gully down to about 4500’, avoiding some forest and making the most of the incredible snow that we found in open north-facing terrain. From there we followed our uptrack back to the road.

Wednesday, Goat Mountain: Last winter my group turned around below the summit of Goat due to whiteout conditions. On Wednesday I skied a nice circuit connecting the south and north sides of Goat Mountain’s west summit. I parked at the Hannegan Pass turnoff, skinned up Hannegan Pass Rd to the Goat trailhead, and followed the summer route up the south side of the mountain. The west summit had some rime ice covering the top 20 feet, but it wasn’t too difficult to navigate and I was able to ski from the summit without any downclimbing. I made a handful of turns down to the entrance to a NW-facing gully system that ran for 3000’ down to the valley floor and provided a fantastic ski. The upper portion reminded me of the Nisqually Chute, but bigger. The lower portion was less steep but much narrower, like skiing through a tunnel. A quick hop across Swamp Creek and I was gliding down Twin Lakes Rd all the way back to my car.

Thursday, Shuksan: Earlier in March high winds forced my partner and I to trade our initial idea of skiing one of the bigger lines on Shuksan’s north side for a couple of laps on the White Salmon - not a bad day by any means, but not what we woke up at 2:30 AM for. On Thursday, solo this time but with much better weather, I skinned up the White Salmon to the north summit of Shuksan and skied the North Face. Navigating the North Face top down was a bit intimidating, but doable as long as you don’t commit to anything until you can see that it goes. Approach a steep rollover, creep to the edge, find your line and repeat. I skied the upper section more cautiously than I would have liked due to the presence of wind-drifted snow. Below the first set of cliff bands I gained confidence and started linking bigger turns. Snow quality was pretty good overall - not as good as other days I’ve had on Shuksan, but the experience of dropping into the abyss with Price Lake 4000’ directly below more than made up for it. I chose the North Face West variation (using the route names from Lowell Skoog’s page), which involves trending left and entering a couloir to connect with the lower White Salmon, over the North Face East variation, which continues further down the fall line, since I was solo and I generally feel safer in couloirs than on big faces when stability is questionable.

I made it back to the parking lot by 12:30 – at this point several parties were still visible on the upper mountain. From the lot I watched a group ski down to the entrance of the Northwest Couloir, then retreat back up the mountain in search of a different way down. Ouch. My friend Sean had skied the NWC the previous day and said it was great, so I wonder what spooked them.

Friday, The Triad: When I heard that Nick & Todd had skied Lost Marbles earlier in the week, meaning that 98% of the climbing required to ski the Kumquat Couloir now had a skintrack/bootpack, I couldn’t resist giving it a shot. The remaining 2% is an ass kicker though. On Friday Jeff Fitzwater and I took a sled up to the Hidden Lake trailhead and made our way over to the west ridge of the Triad. We could see the entrance to the Kumquat a short distance away, but getting there required either traversing east along the ridge, or dropping down the backside and re-ascending a portion of the Triad’s south face. We chose the ridge traverse but eventually reached a point where neither of us was comfortable with the type of climbing required. After retracing our route back down the ridge we decided that it was too late in the day and too warm to consider the alternative approach to the Kumquat via the Triad’s south face that was already starting to shed loose-wet debris. We ended up skiing laps on north-facing slopes from 2 different high points along the ridge that connects the Triad to Hidden Lake Peaks. Perhaps the Kumquat will serve as inspiration for the North Cascades Redemption Tour, 2022 edition!

All in all I couldn’t have asked for a better week, racking up about 25,000’ of vert and skiing north-facing powder on amazing peaks for 4 straight days. March delivers yet again in the Cascades. 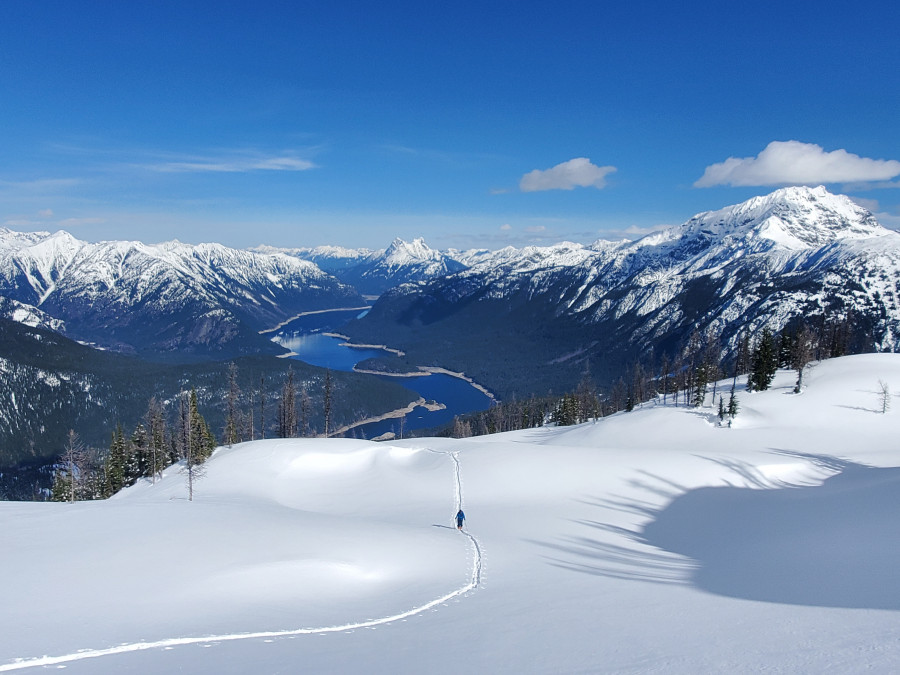 Reaching the summit ridge on Ruby 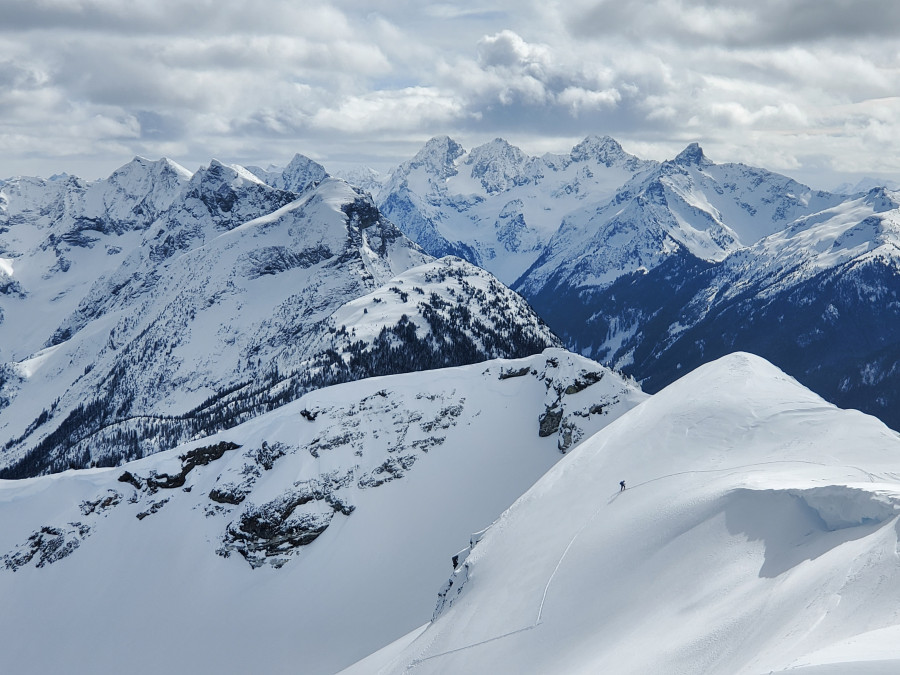 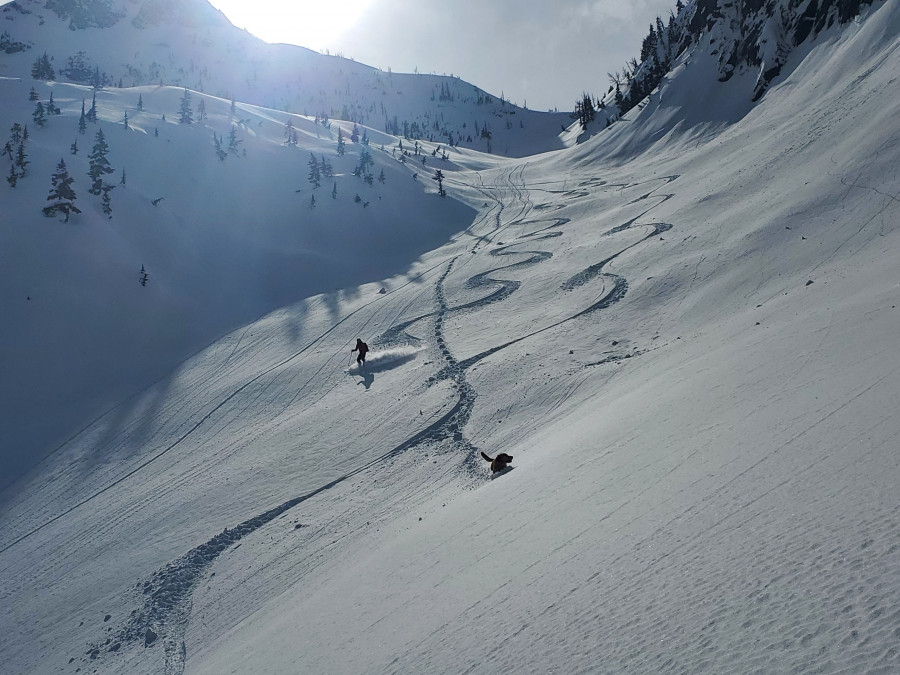 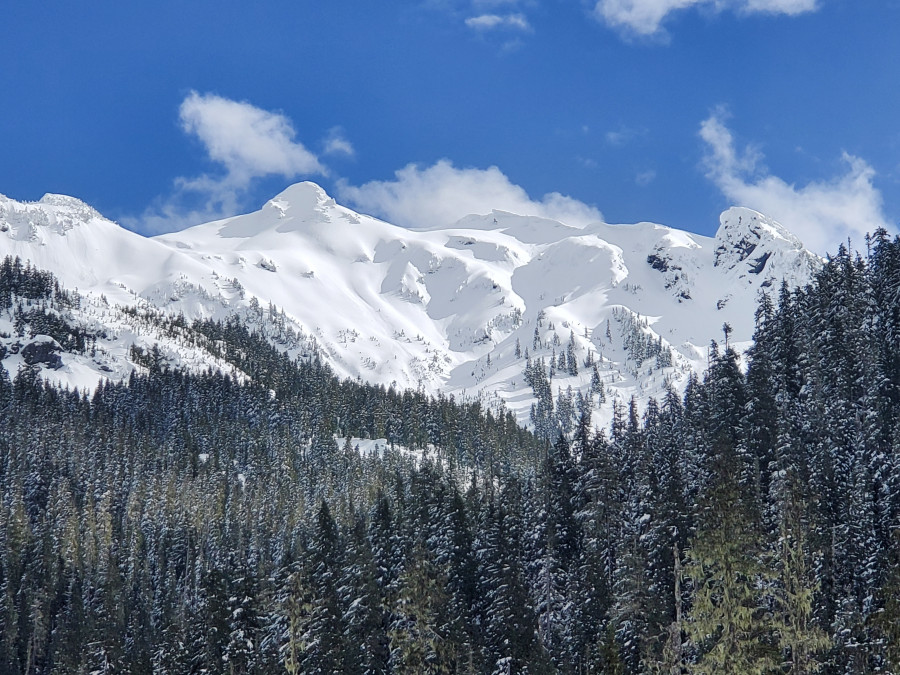 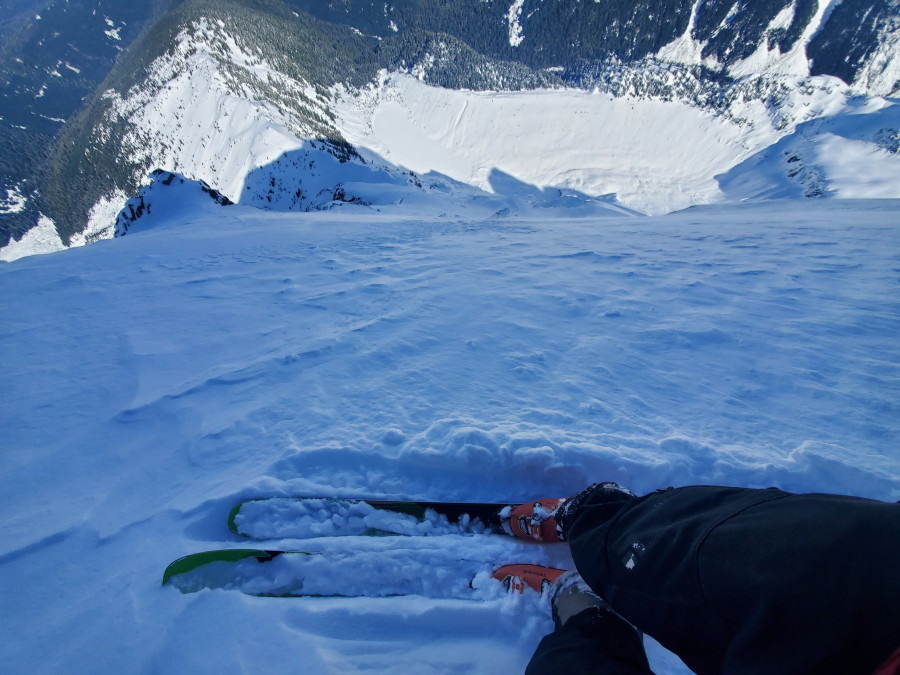 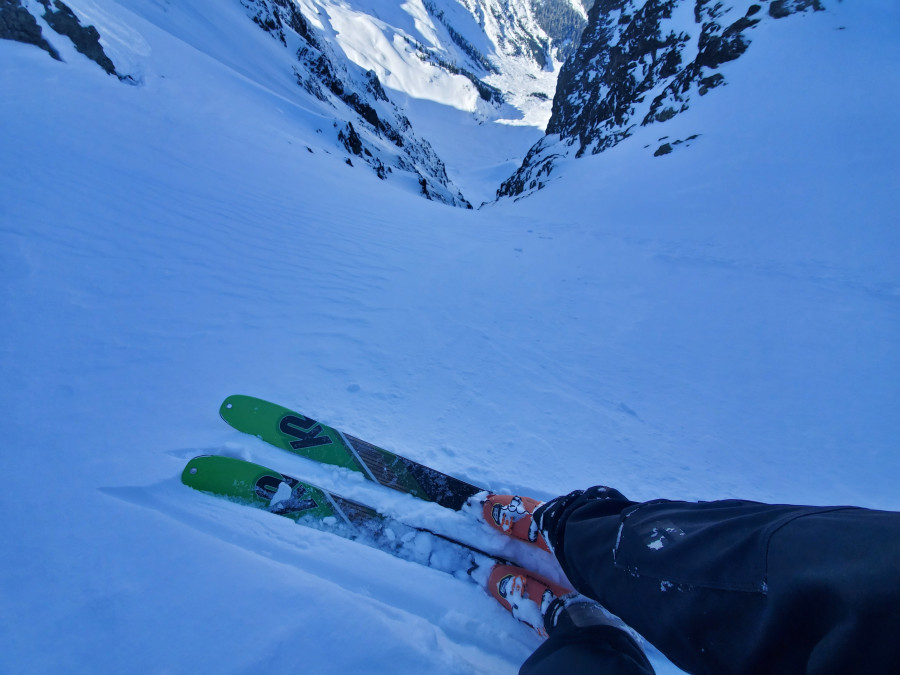 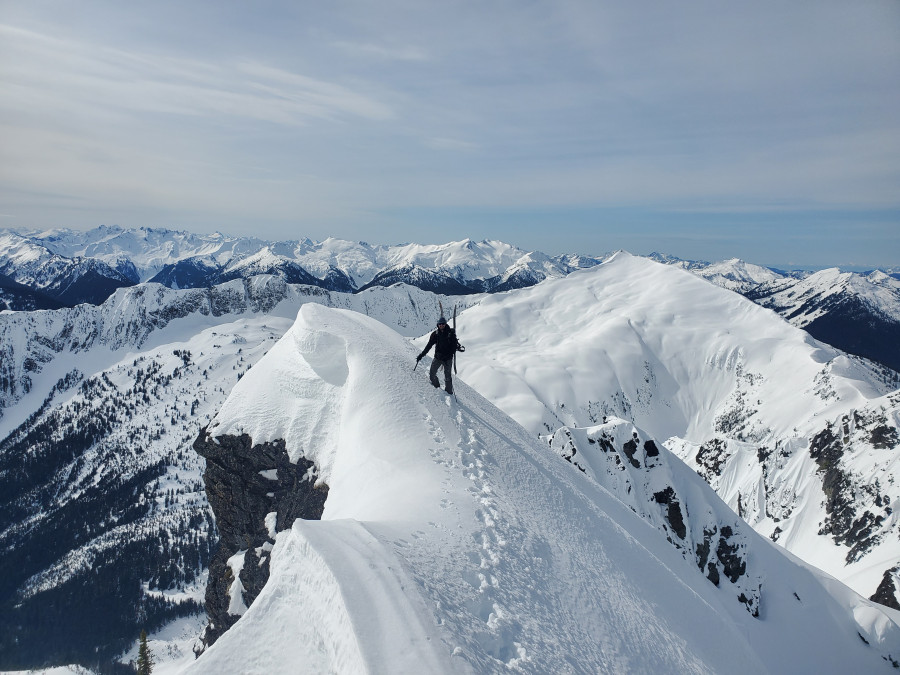 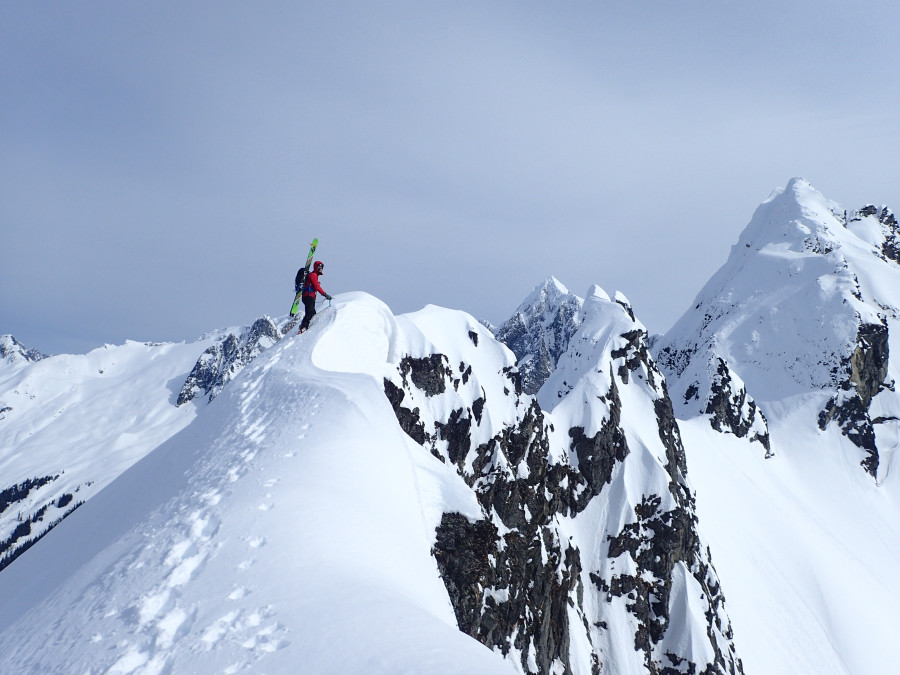 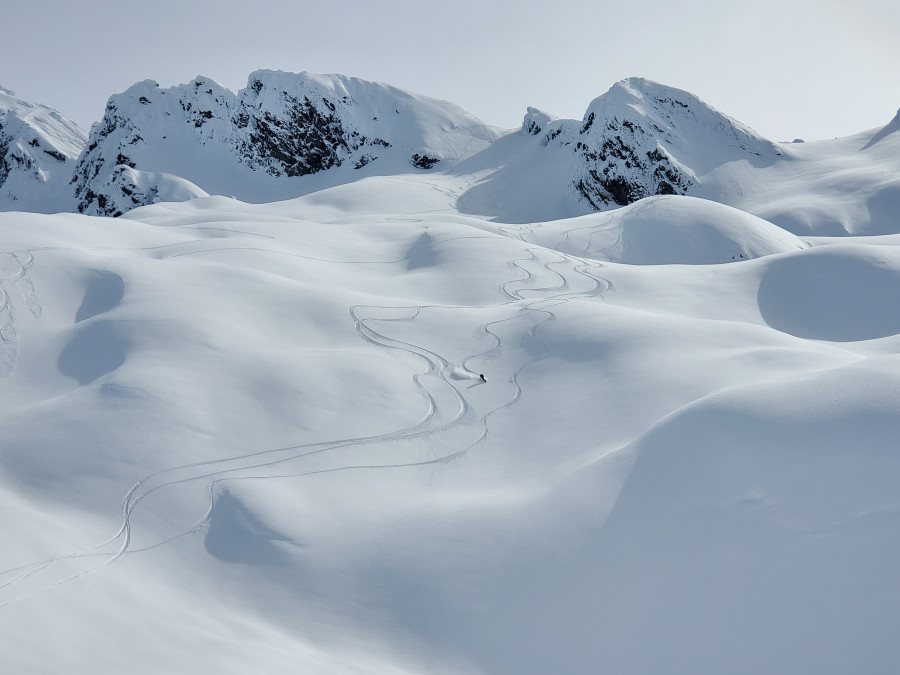 Monster session! We watched you ski the bottom of your Shuksan route as we climbed up the White Salmon. Nice work

Heard from some people who checked out the NW couloir that it was very busy and had a little ice above and in the traverse.

Here's a quick video edit of some ski footage from Ruby & the Triad: https://youtu.be/bPB8YKG4co0

Whoa.  How much elevation gain did you do in 4 days???

@stefan, I don't keep track but a rough estimate is 25K.