I enjoyed my first taste of real Spring skiing on Sunday with the wonderful team of Jake, Lane, and Oli. Since moving to Bellingham I've enjoyed exploring the Twin Sisters range. According to Beckey and summitpost, this was originally known as Kwik-Kwek Smanik, meaning "red rock mountains". The most common access is via logging roads that lead to the W side of N and S Twin Sister, but these necessitate some way of getting through the gate or a long approach. On the other side of the range, Green Creek has become more popular with climbers and now has a blazed climber's trail branching off of Elbow Lake trail at a switchback near Hildebrand creek.

A different group and I went in Green Creek on Easter Sunday and enjoyed spectacular scenery, deep fluffy powder, solitude, and a non-trivial bushwhack. We traveled up the glacier to the saddle next to Cinderella, crossing the crest, and traversed two bowls N until we were in the shadow of Hayden peak and looking at S Sister's S face. Each shady bowl held spectacular dry powder and the wind gave us billowing face shots. We returned the same way and enjoyed knee deep blower down the Green Creek glacier until about 5k elevation. We started and ended in the dark and loved every minute of it.

During that voyage I ogled a bunch of potential ski lines, one of which was a nice plumb line dropping from what appeared to be a tame col through Mythic ridge (the ridge running NE-SW from Mythic peak towards S Twin). It also seemed like connecting the two common approaches to the range would make for a nice mini-traverse with the benefit of minimal car shuttling. Sunday's forecast after a rare period without storms had at least the potential for corn... the stage was set.

We went in the usual N Twin way, walking some sections of the trail until continuous snow around 4k, and skinned to the W ridge. From there, we were able to do a descending traverse into the basin between N and S Twin. This involved some foot travel on rock, heather, and light bush, but was probably more enjoyable than a schwack with skis up the climber's trail into that basin. From there we gained the notch between N and S Twin with a short section of steep cramponing and took a quick break on the mellow Sister's glacier. This is a route I explored on a trip in February 2021 when some friends and I skied the N faces of both Twin Sisters in a fun day.

We originally planned to climb up S Sister's NE face and drop off the sunny side, connecting to my previous Green Creek route. The cornice was big atop that slope, and the group was hesitant to commit. I pitched the idea of exploring other more mythical portals into Green creek, and that sounded good to us all. We made a few descending turns and then a lot of herringbone to cross the flat glacier to the notch with Mythic wall.

Looking down the notch at 11 am, we were delighted to see a welcoming 1000' corn slope which led into Green Creek basin. My partners skied down first and scoped the runout of a steeper entrance that was beckoning. After the all-clear, I enjoyed really nice steep turns on 1/2" of corn down narrow corridors and hanging panels threading the orange rock. The apron begged for wide open turns and, to my surprise, the snow remained high quality.

The skiing dispatched, a quick look around made clear that this was not a friendly spot to hang out. Large slabs of snowpack were perched high on the walls, waiting to glide down and add to the debris jumbled around us. We discussed skiing out the valley but decided we could ascend shadier aspects without much overhead hazard and get a second run from Cinderella peak.

Gaining Green Ck glacier was a very steep skin, but the snow was soft enough to provide good grip while not too mushy to collapse. We took a water and lunch break beneath Little Sister and continued to Cinderella peak. We gained the ridge of this with a short but steep skin and booted to it's summit (or perhaps a slightly lower sub-summit... whatever).

I think we were all expecting a lot of mush at this point, but skiing down at 1 pm the glacier held supportive corn-like snow until about 5k, when it became mush. We moved fast through a section where we were exposed to the Mythic wall, which was shedding many avalanches, and eventually came to the end of the continuous snow near 3k. Here we crossed to the S side of Green Ck and wandered around until we saw two giant Nootka Cypress that are near the climber's trail.

My partners had been in this way in summer and were great help finding and re-finding the trail as we inevitably lost it in the patchy snow. From the cedars, we more or less followed this trail out making a few easy creek crossings. The final crossing of the middle fork Nooksack has a good logjam to cross slightly downstream of the trailhead.

This was an awesome journey and marked the start of hopefully many big spring ski days to come! Thanks to Oli, Lane, and Jake and other ski partners (especially Gregg, Eric, Jessie, and Scarlett) who have come along on these half-baked adventure trips.

Dropping into the W basin between N & S Twin 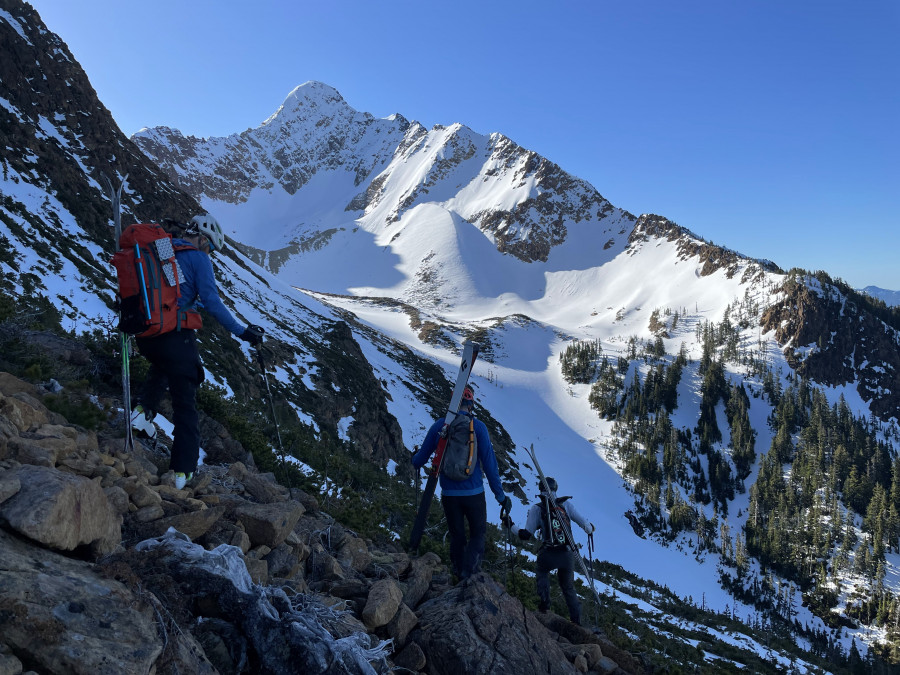 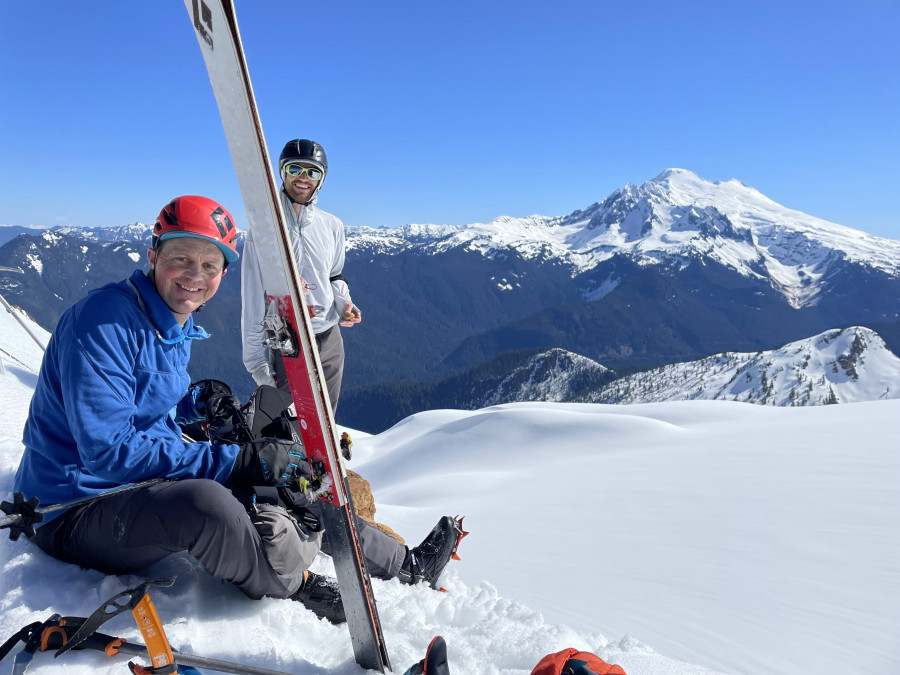 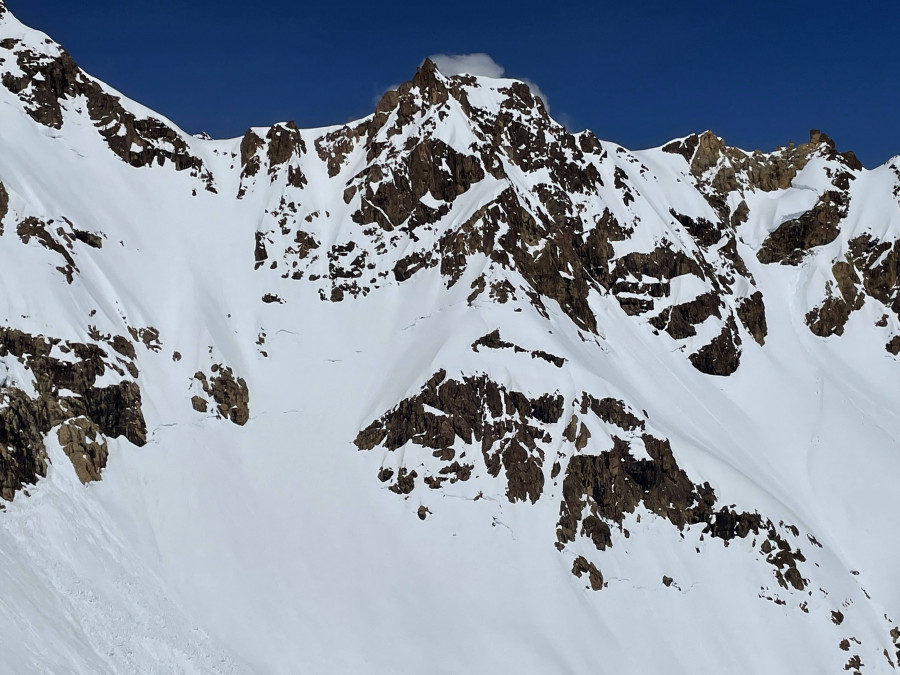 Center left: the couloir system that we skied from Sisters glacier into Green Creek cirque 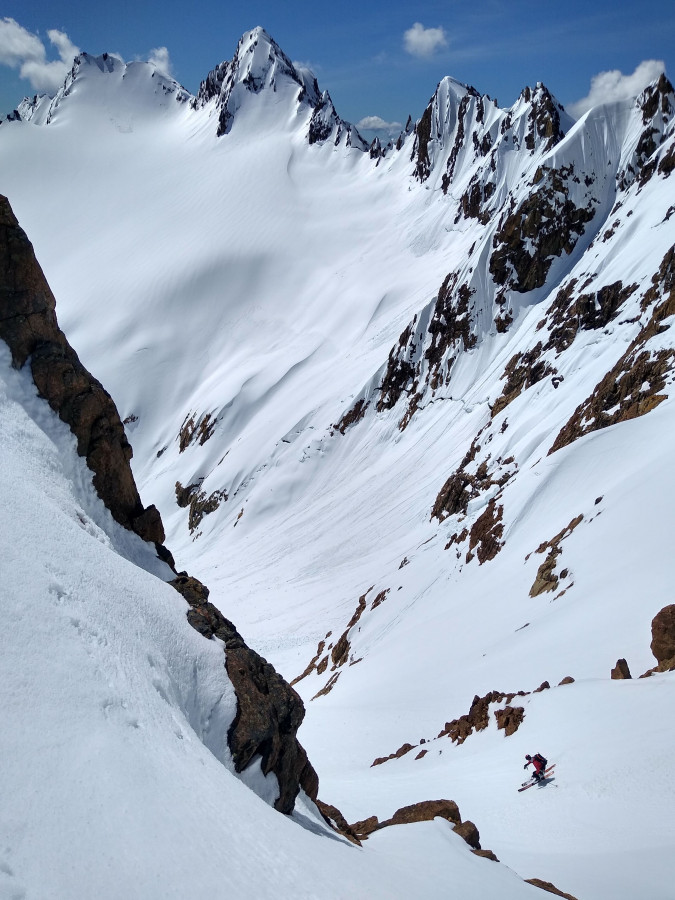 Poking down the looker's right variation 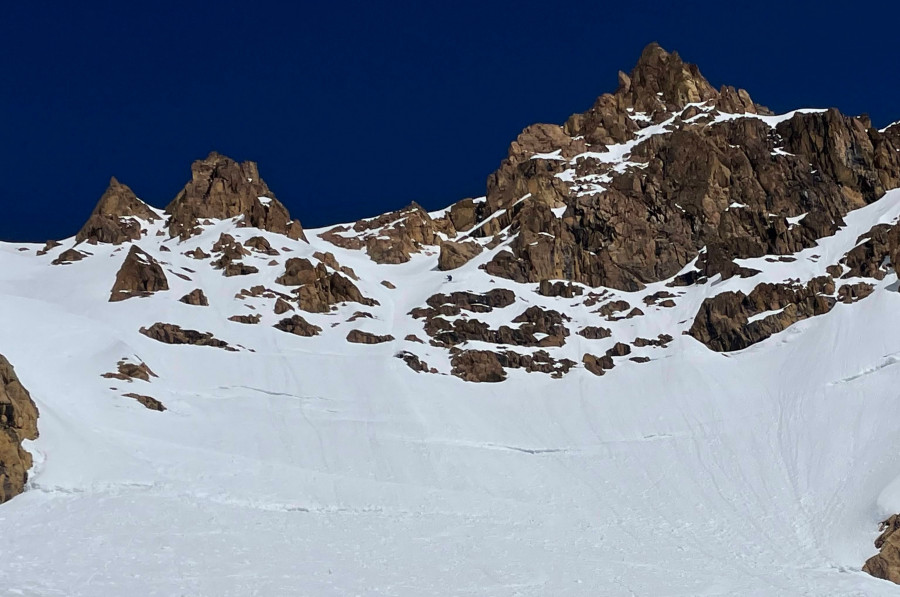 Slightly steeper and narrower here... good corn if you can believe it 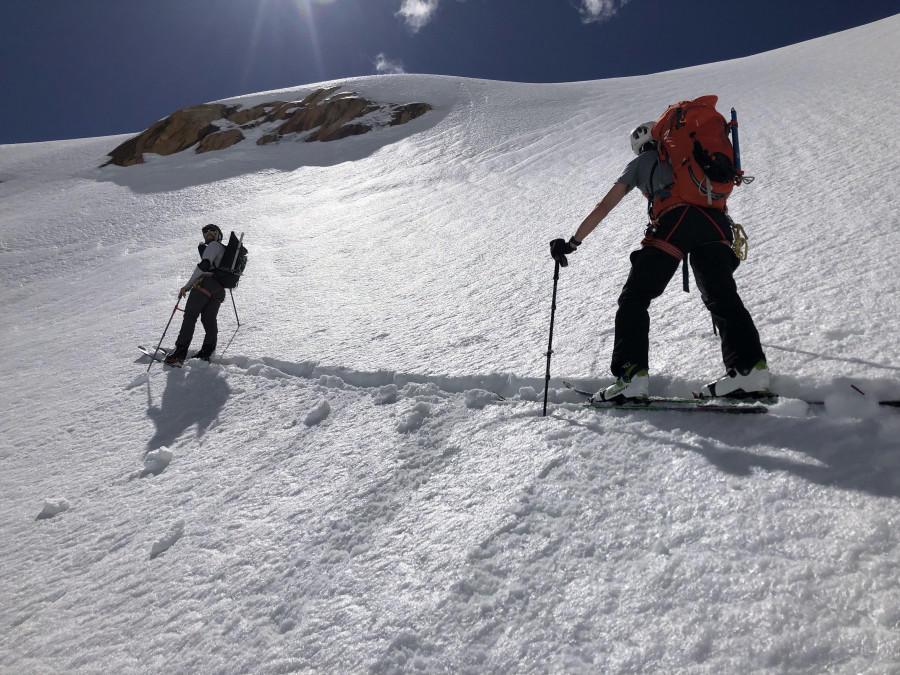 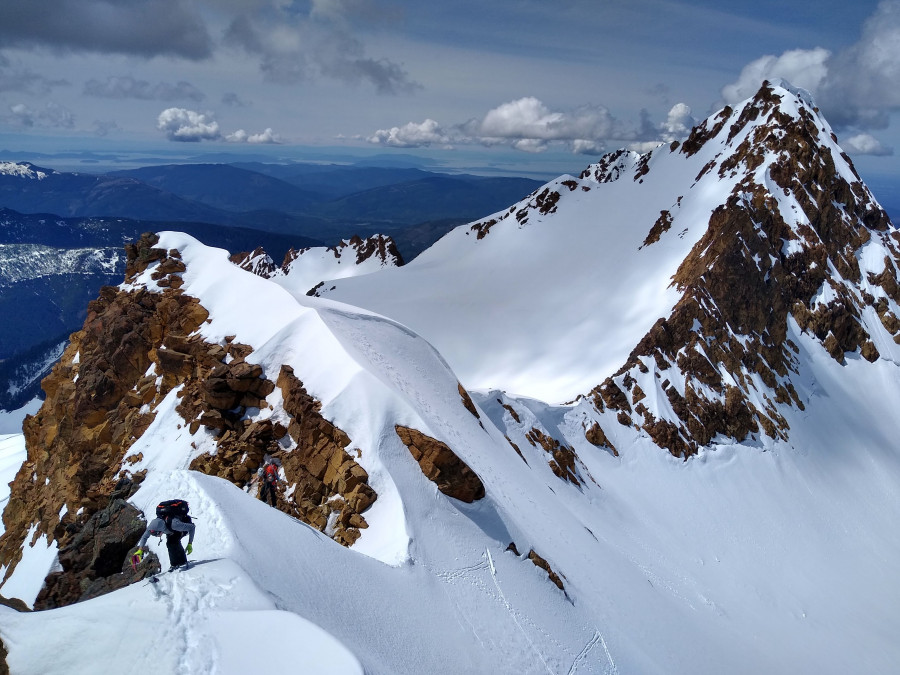 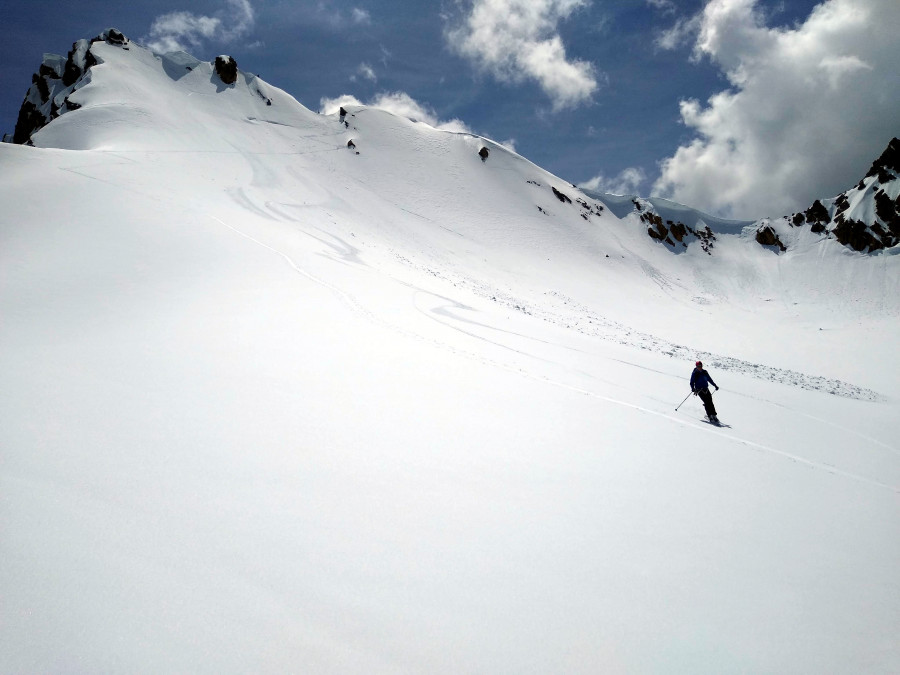 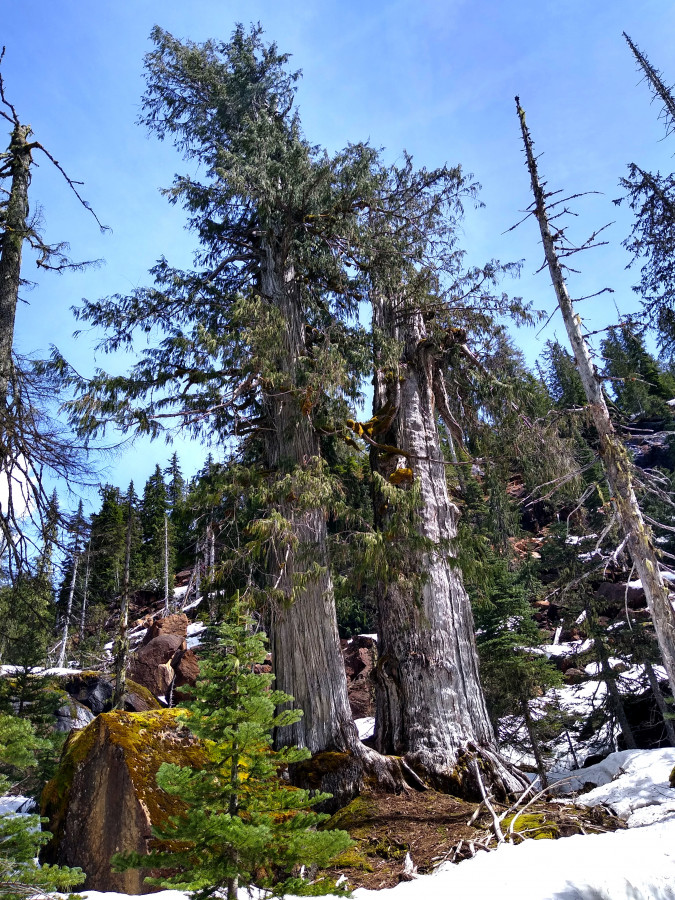 Get to the beer 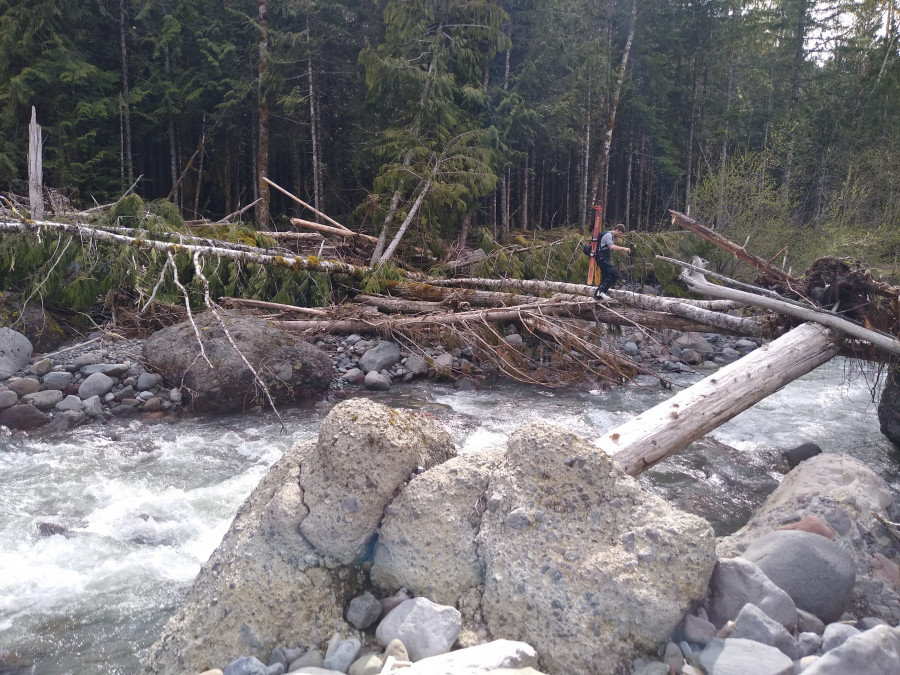 Wow, super inspired! Any chance you could post a map with your route?

Hi bigeo, good to hear from you. 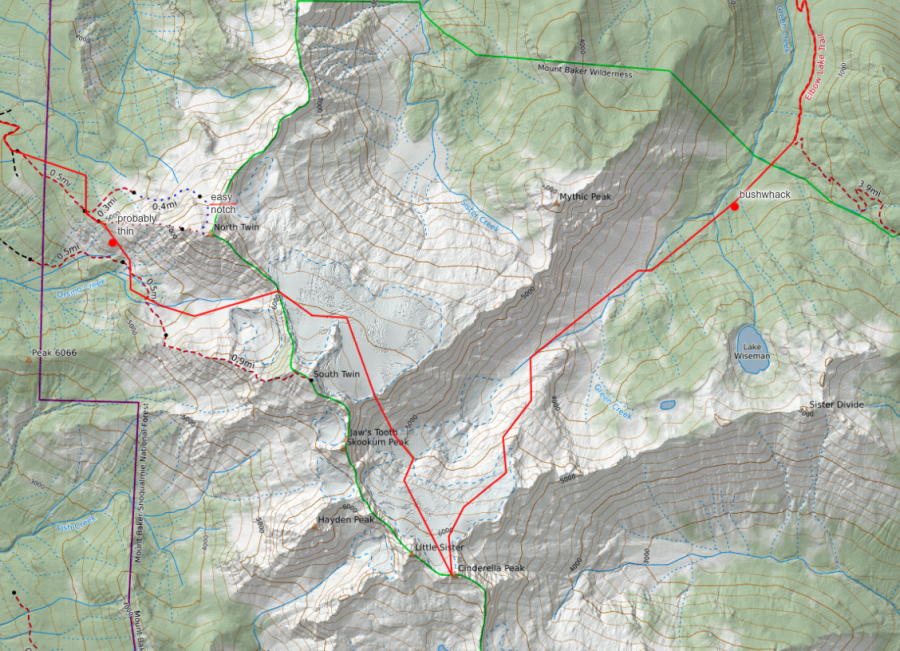 Thanks Kamtron! This area has gone to the top of my short list. What is the gate/road status coming in from the NW?

Locked and gated, unless you get lucky

Way to get creative out there! Glass slippers is a great name for that run

Nice route, Kam! Way to connect our previously visited zones.  Glad you got to ski that shot you remarked on down to Green Creek. Gotta get back there with you again, fun touring range.

Thanks Kam for the great day and planning and executing that route!

My favorite part of the day was skating around the corner on the Sisters glacier and coming up on the top of that line at the end of Mythic ridge with the whole Green Creek glacier below.

Glad you made it happen Kam!

"Nootka Cypress", good to know what they are, amazing trees. I always love seeing them on the way in or out of that basin.