With the generous snowpack at pass level, and some recent success on nearby couloirs that filled in early this season, I decided to go exploring with the goal of checking out and hopefully skiing the East Couloir on Guye Peak.

The day started off less than stellar, breaking trail in warm humid air through feet of unconsolidated but completely saturated snow in Commonwealth Basin. I considered turning around before even catching a glimpse of Guye Peak, but a close encounter with a long-tailed weasel (or possibly a pine marten) in the forest just after the log crossing encouraged me to keep pushing on. I passed underneath the E face of Guye and started skinning NW up lower-angled terrain on the climbers right side of the creek, heading for the notch between Guye and Cave Ridge. It was slow going with the deep snow and no one to share trail-breaking duties with. Fortunately the snow got drier as I ascended, and became something resembling powder above 4K. I caught brief glimpses of Red and other nearby peaks and saw no signs of a natural avalanche cycle from this past storm - quite different from Sunday when there were crowns and debris everywhere. While skinning I found stability to be good - again, much improved from Sunday when we were triggering storm slabs in the upper snowpack on every steep feature.

Upon reaching the North summit I was pleased to discover the East Couloir is currently quite skiable. It was starting to snow heavily so I didn´t waste any time getting ready to descend. I stepped around a cornice that doesn´t quite span the entrance and started making my way down. The couloir wasn´t as steep as I had expected, but what it lacks in steepness it makes up for in chokeyness! Snow coverage is excellent but sluffing from recent storms has created a large runnel in the center of the couloir, not quite wide enough to carve turns in. Same story for the slopes on either side of the runnel. I need to step up my straightlining game to ski this type of line more fluidly, but in the meantime I just took it slow. There were two short sections where straightlining was not optional - one right at the top and one near the bottom where the couloir splits. The skiers left option looked cliffy, skiers right was filled in but had a small ice choke.

The apron actually provided the best turns of the day, with deep powder and wide open terrain. Skiing in the trees on the lower slopes of Guye was pretty good too, with nicely-spaced old growth and a decent pitch. Seems like this should siphon some traffic away from Kendall trees, but I guess no one wants to do the log crossing if they don´t have to.

This was probably the hardest I´ve ever worked for a measly couple thousand feet of skiing, but so worth it! Can´t wait to return with friends to ski the line in better style. 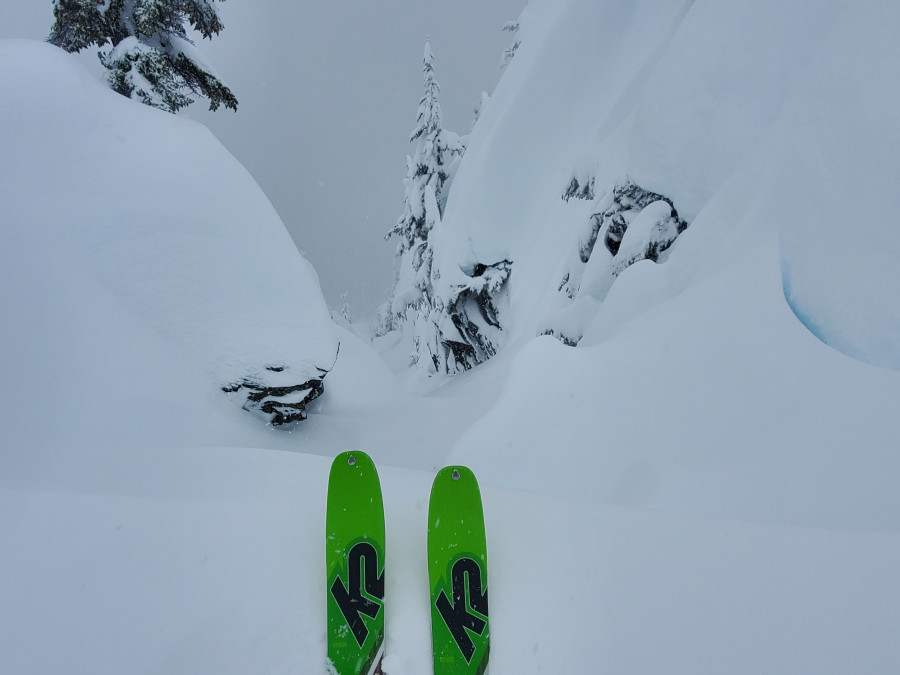 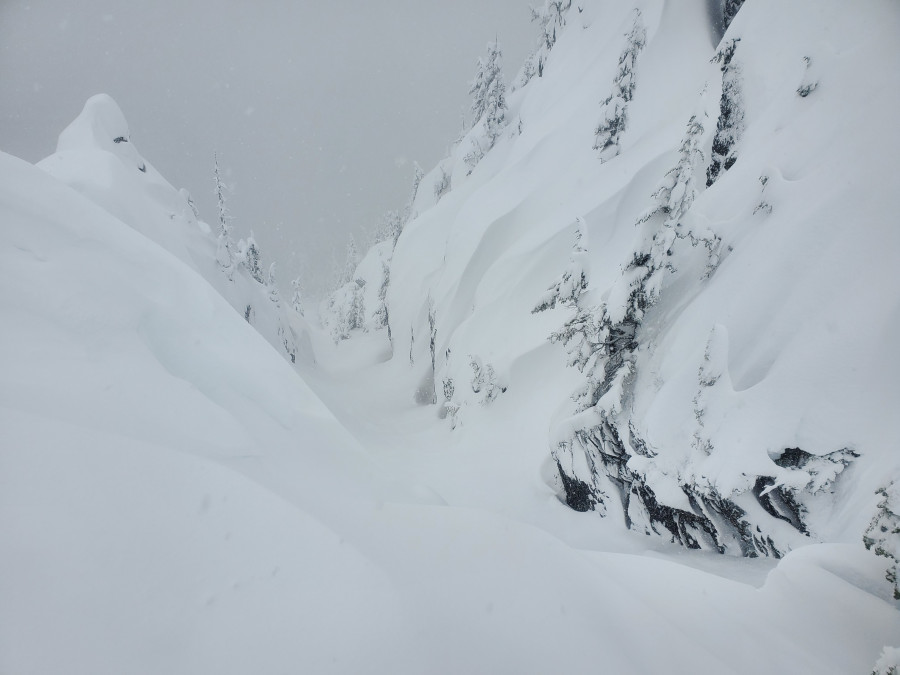 Dang, great workout. Can you share any stability observations? Curious what the snowpack is doing as it keeps getting added onto. Thank you!

I skied that once, in waist-deep but stable conditions. I dropped in after a few others had skied and tucked away right. It was so deep that my Dynafit radicals prereleased with my ski buried in the snow. I came to a stop and had to tunnel uphill and probe for the missing ski using my ski pole. Fun times.

@kamtron - proof that you don´t need to go very far (or even very high) to have a big adventure!

@mtnpavlas - my observations about yesterday´s snow conditions are in the report, but anything I wrote re: stability is already outdated/irrelevant thanks to yet another storm.

Just want to add that we were in the trees below Guye on Sunday (no log crossing btw...) and I felt rather uncomfortable and kept a watchful eye above us... lots of steep, often hidden overhead avi potential there--somewhat akin to the ridge above the Kendall glades.
Because of that I would not recommend it as an alternative to the Kendall trees...especially not on high avi days which is when a lot of skiers go to Kendall trees.

"Skiing in the trees on the lower slopes of Guye was pretty good too, with nicely-spaced old growth and a decent pitch. Seems like this should siphon some traffic away from Kendall trees, but I guess no one wants to do the log crossing if they don´t have to."

Thanks Stefan! I considered going further up Commonwealth to see about crossing the creek on a snowbridge, but wasn't sure how far I'd have to go and was reluctant to add miles on such a deep day.

Tim - you do not have to go much farther if the skinny log crossing is sketchy, there's a real crossing (three logs lashed together) just 5min further up the trail.

Love the area, not just Guye Peak but going the other way up to Cave Ridge.  Perhaps tomorrow?

@jjc, thanks for the crossing beta.

Also, if you do go tomorrow (or some time soon), please post a TR - really curious what the conditions are like in the Snoqualmie Pass environs after the Pineapple Pass event with above-freezing temps, rain, wind, etc.