2/15/10
WA Cascades West Slopes South (Mt Rainier)
12867
9
Posted by Amar Andalkar on 2/16/10 5:08am
Three of us (Dave Brown, Clint, and I) headed up to Muir for Presidents Day. The forecast looked good, partly sunny with moderate winds predicted at 10000 ft, even though telemetry and webcams showed that it had rained up to perhaps 8000 ft on Sunday, with only a brief changeover to snow at Paradise in late afternoon. The Longmire gate apparently opened shortly after 7am (holiday hours?), and the parking lot was looking busy by the time we arrived just before 10am. The Mountain was out, topped by a nascent lenticular and trailing another in its lee.

Skinning up, the snow conditions were as expected: rain crust topped by a half-inch of snow bonded into it, with somewhat increasing amounts of windpacked snow atop the crust above 6000 ft. Followed a nice skin track up Pan Face, then cut left and made our own skin track around the knob above Pan Point (near 7000 ft) to avoid a needless icy sidehill which was giving other skinners fits. Light winds at Paradise, but steadily increasing with elevation above Pan Point, SW at about 20-30 mph, making things quite chilly on the upper Snowfield. Joined a few other skiers and boarders huddled in the partially snow-filled Muir Hut around 1:30pm, then skied down around 2pm.

Despite the icy blasts of wind, ski conditions on the Snowfield were very good, mostly smooth windpacked powder, predictable and carveable with no crust. Not the outrageously amazing graupel-powder found here a week ago (

Dave insisted on a second run, and as if shot out of a cannon, plowed a steep unforgiving skin track back up the Chute. Clint and I followed up to 7300 ft, switching over to ski mode around the same time as Dave did so near 8000 ft as conditions grew too icy to easily skin up any further. The sun had dropped behind some clouds, and the snow was quickly firming up. In addition, the light had gone extremely flat, possibly the flattest light I've ever encountered in otherwise 100% open visibility (with no snow, fog, etc.). The ski back down was tricky in the crusting snow and flat light, and the sun finally poked out from beneath the cloud layers just AFTER we skied down. Oh well. A quick skin back up to Glacier Vista brought us to the crustiest and nastiest skiing of the day, a rutted minefield of breakable crust back down to the parking lot, and great caution was needed to avoid a nasty spill or injury.

All in all, a great midwinter day on Mount Rainier, with good to great snow conditions up high far outweighing the crust down low. And partway through the day, I suddenly realized that February 2010 was my 100th consecutive month of skiing. I'd already skied twice in Feb, but somehow the thought of the streak had never crossed my mind those times. Anyway I was stoked! And it's nice to have shared the year-round ski experience with so many of you on this site!

SYNOPSIS...A WEAK RIDGE OF HIGH PRESSURE OVER THE COASTAL WATERS WILL SHIFT INLAND TONIGHT AND EAST OF THE CASCADES ON MONDAY.
A FRONTAL SYSTEM WILL MOVE THROUGH THE AREA MONDAY NIGHT AND WILL BE FOLLOWED BY A COOL UPPER TROUGH ON TUESDAY.
HIGH PRESSURE ALOFT AND LOW LEVEL OFFSHORE FLOW WILL GIVE DRY AND MILD CONDITIONS TO THE AREA LATER THIS WEEK THROUGH THE WEEKEND.

You've got to love those guys who insist on laying a skin track for another run at the goods.

That is quite a impressive streak.
2/16/10 2:14pm
silaswild
Hope you enjoy the second 100 even more!  Congrats.
2/17/10 2:39am
ovrthhills
We experienced the same conditions about ten ago, days including the flat light with no fog or snow and barely survived the ski back to the parking lot.  Actually thought about  putting skins back on to ski down.  Glad things stablized after last week's snowfall.
2/17/10 9:36am
daveb
Yeah Amar, Happy 100!!

I added a photo of Clint near the bottom of the chute. 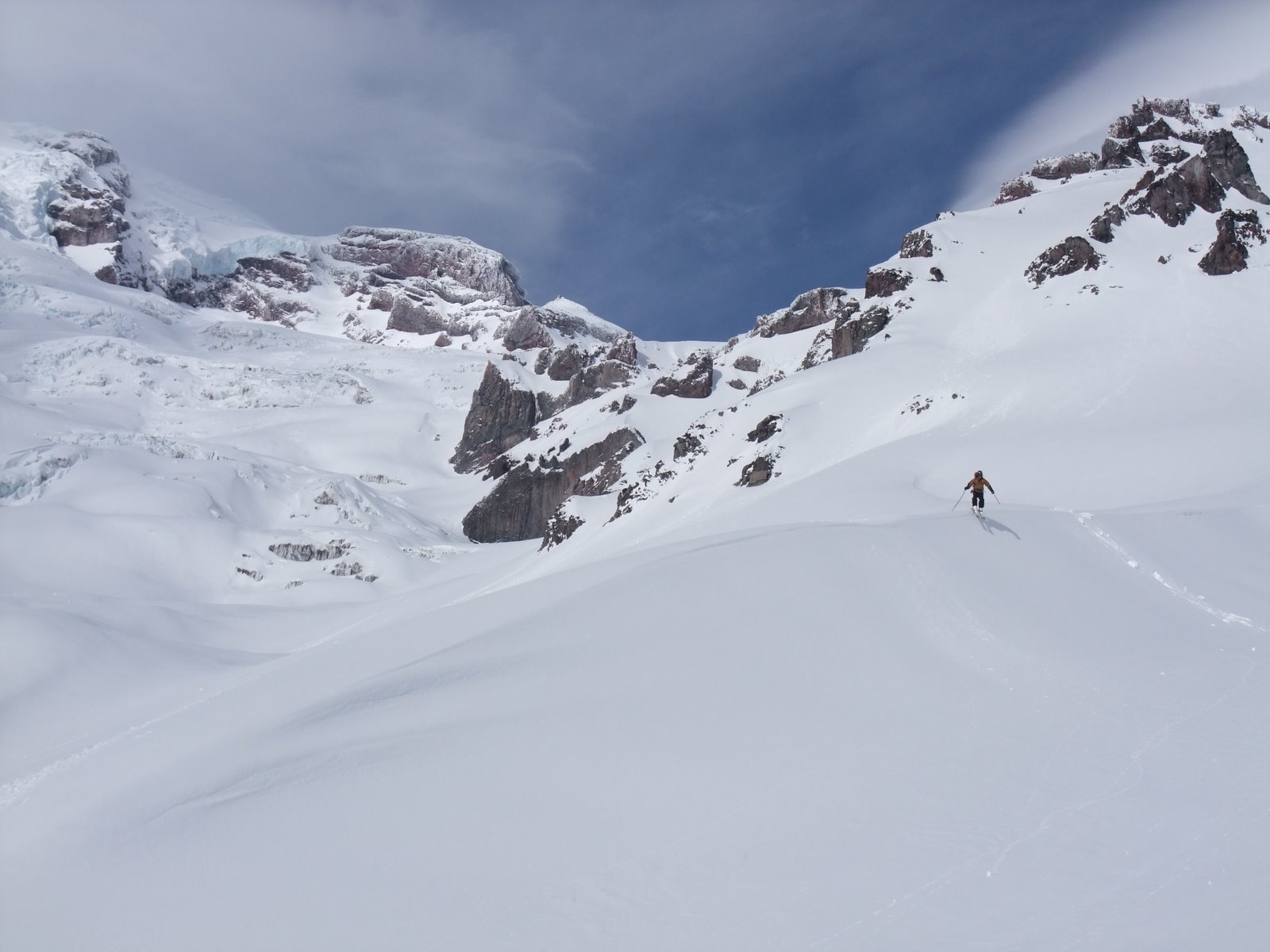 2/18/10 2:07am
ryanl
way to go Amar. I have alot of respect for your streak. For you. Keep it going- and keep me in mind come July when the snow lies further from the trailhead. I should have more than enough motivation saved up by then to get us to wherever it may be....
2/21/10 11:36am
unclebo
As a newbie - congrats on the Centurion