Over the weekend, Matt and I skied from Alpental to the Middle Fork trailhead along the crest of the sub-range that runs NW between the Middle Fork and Pratt River valleys. For me, the primary reason for checking this area out was, in addition to seeing some places that I haven't been before, getting a chance to take a look at (one of the) Preacher Mountain Couloir(s) that caught the eye of my brother and eye from Mount Snoqualmie a few years ago. There are a few other TRs out there about other missions over to Preacher, including one in a day (!), but not too many details - and, in fact, since the SE aspect of Preacher seems to harbor several cool-looking couloirs, it's good to be explicit about which couloir I'm talking about - the couloir which drops to the east side of the South Ridge of Preacher, starting a notch on the South Ridge about 1/3 of a mile south of the true summit... which looks like this: 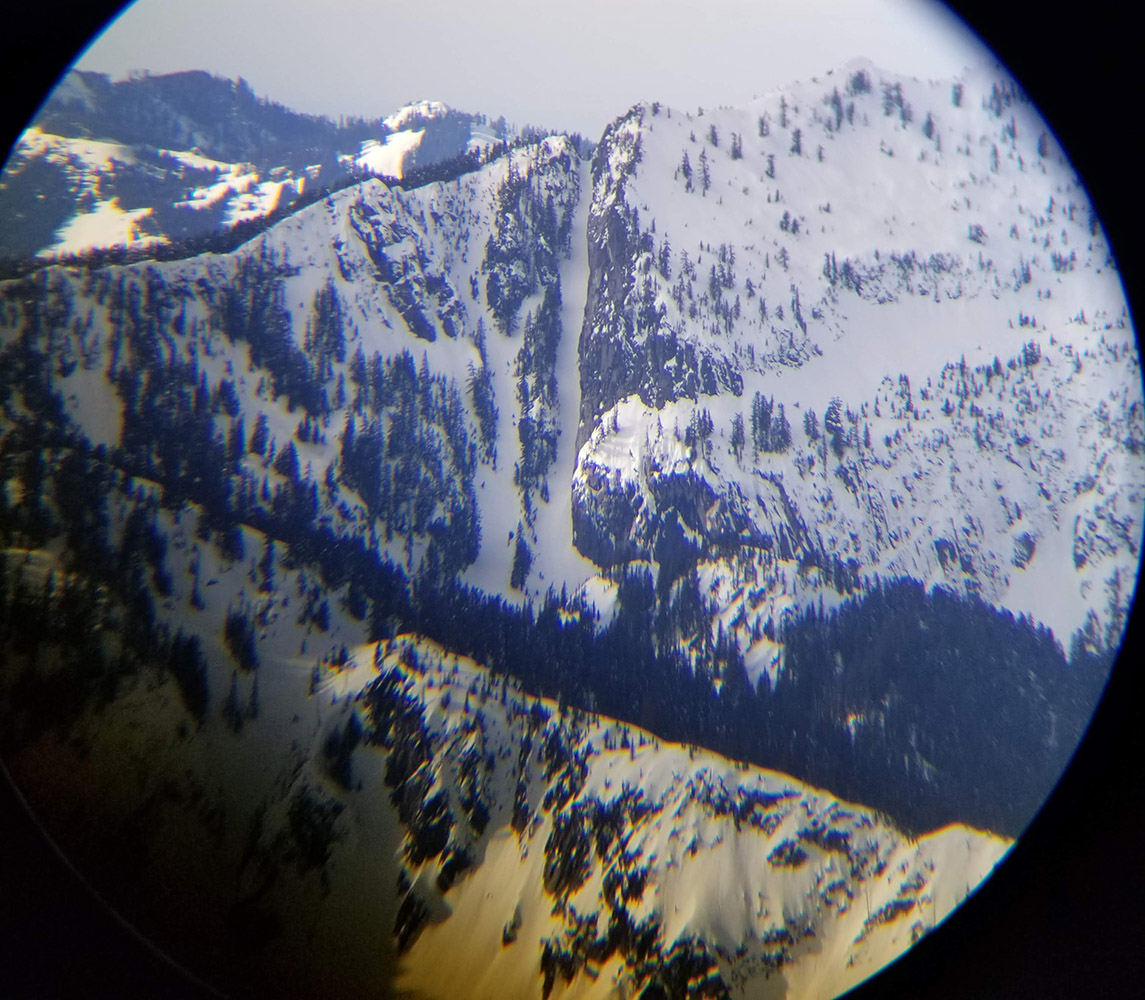 This is the photo which inspired this trip, taken from the summit of Mount Snoqualmie in late February of 2020. Knowing that the Middle Fork road is plowed to the Middle Fork trailhead, we decided to drop a car there the night before the trip, as doing a through trip seemed more sporting, and the unknown-factor of exiting via the Rainy Lake valley kept things fun. With the weather moving in on Sunday, we opted to do the trip in two days, Friday-Saturday, which, combined with short days this time of year, meant we wouldn't have too much time to explore, but that was ok - we'll have to come back! 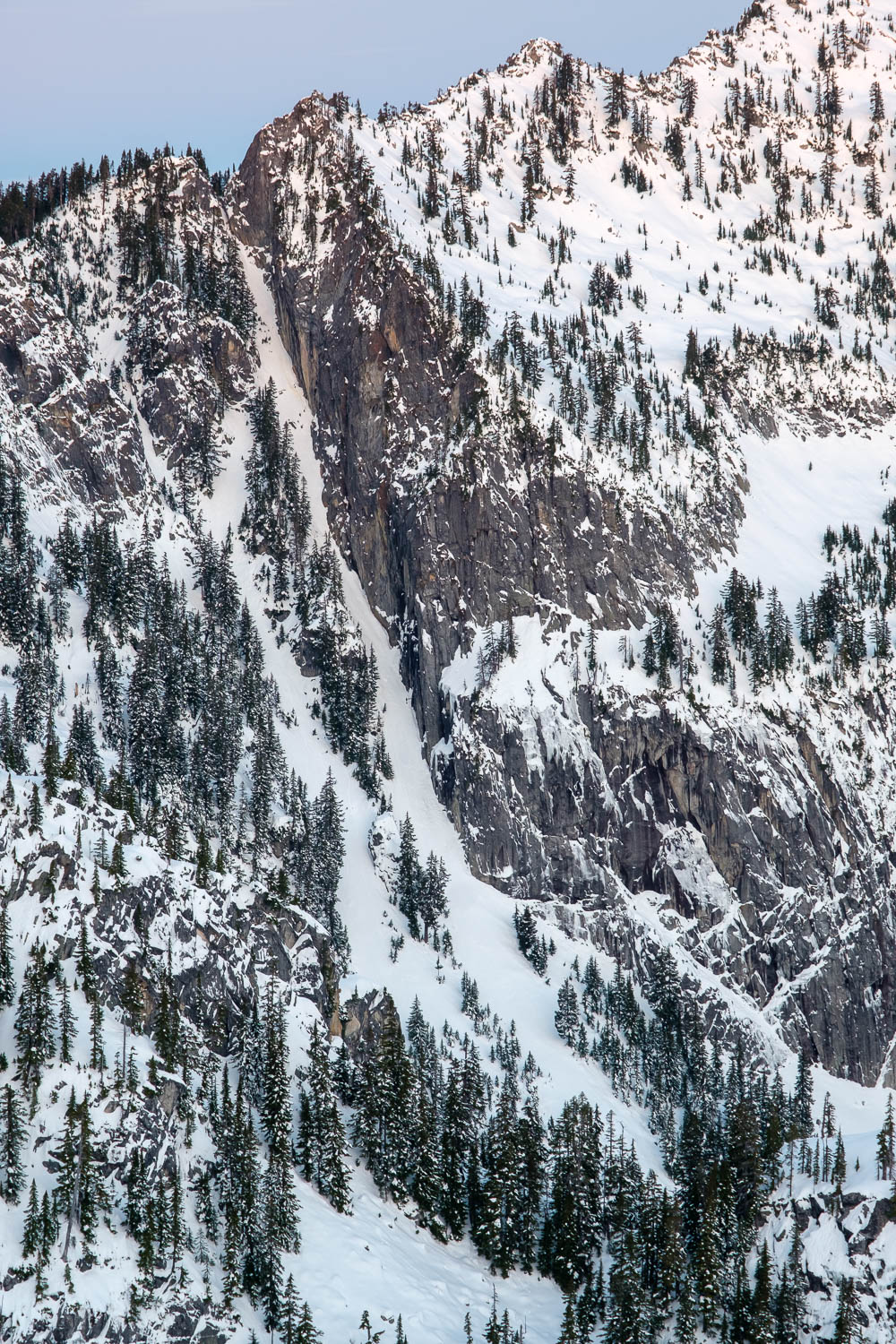 Erik was kind enough to give us to a lift to the upper Alpental parking lot - opening day! Left the car just before 9. It was cold in the shade, in the mid teens! Decided to ski straight to Snow Lake instead of skiing the Chair Peak north slope descent to save a bit of time getting to the Diver. Made quick work up to Source Lake at 9:30, then skied over the Divide and down surprisingly good skiing with cold dry snow to Snow Lake, then started skinning across the lake at 10:20. 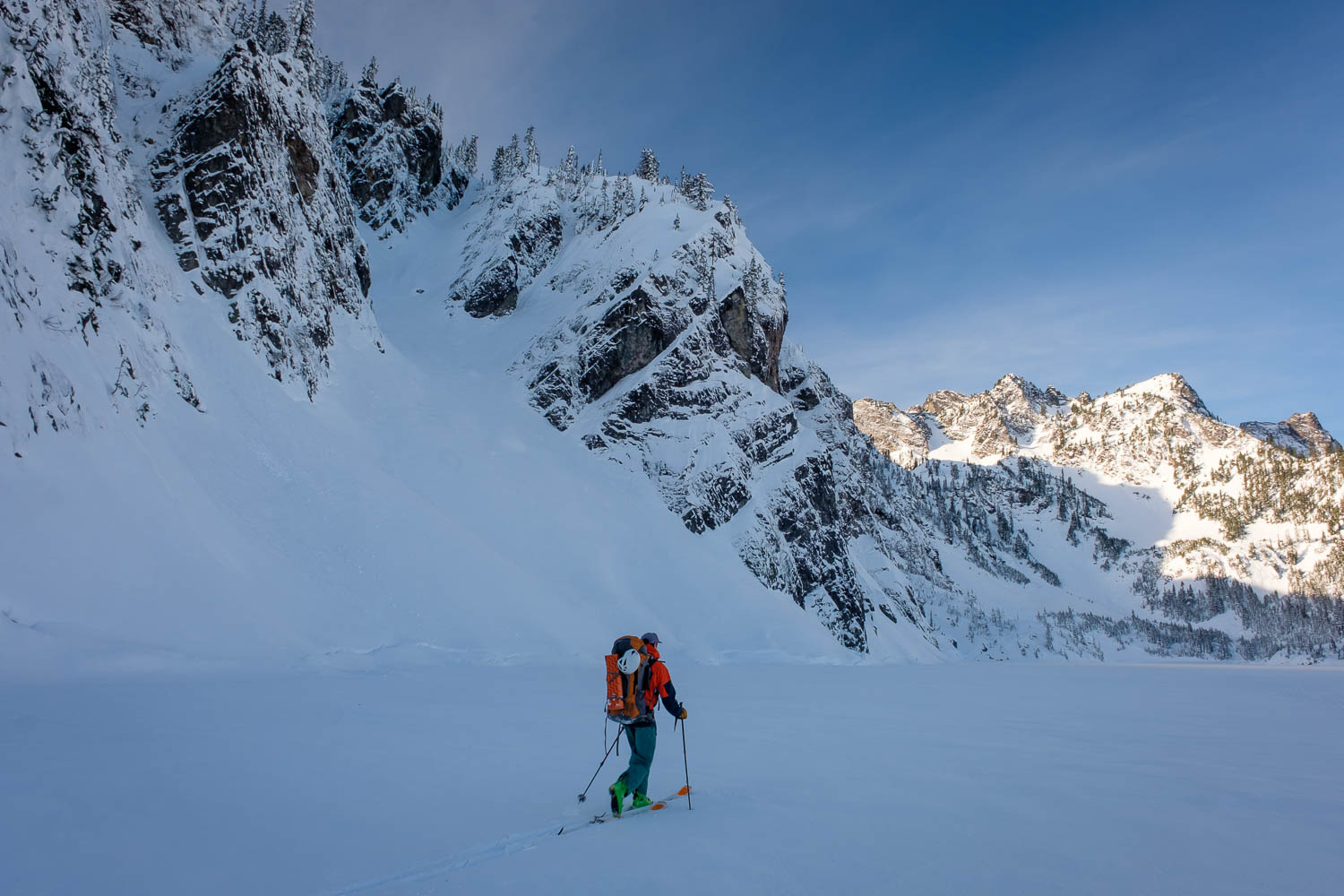 Passed one party at the far side of the lake, and from there it was breaking trail the whole rest of the trip. Having scoped the route up Roosevelt from the lake, we decided to take the SE face instead of the East ridge because the ridge looked bony and we felt okay about the stability. 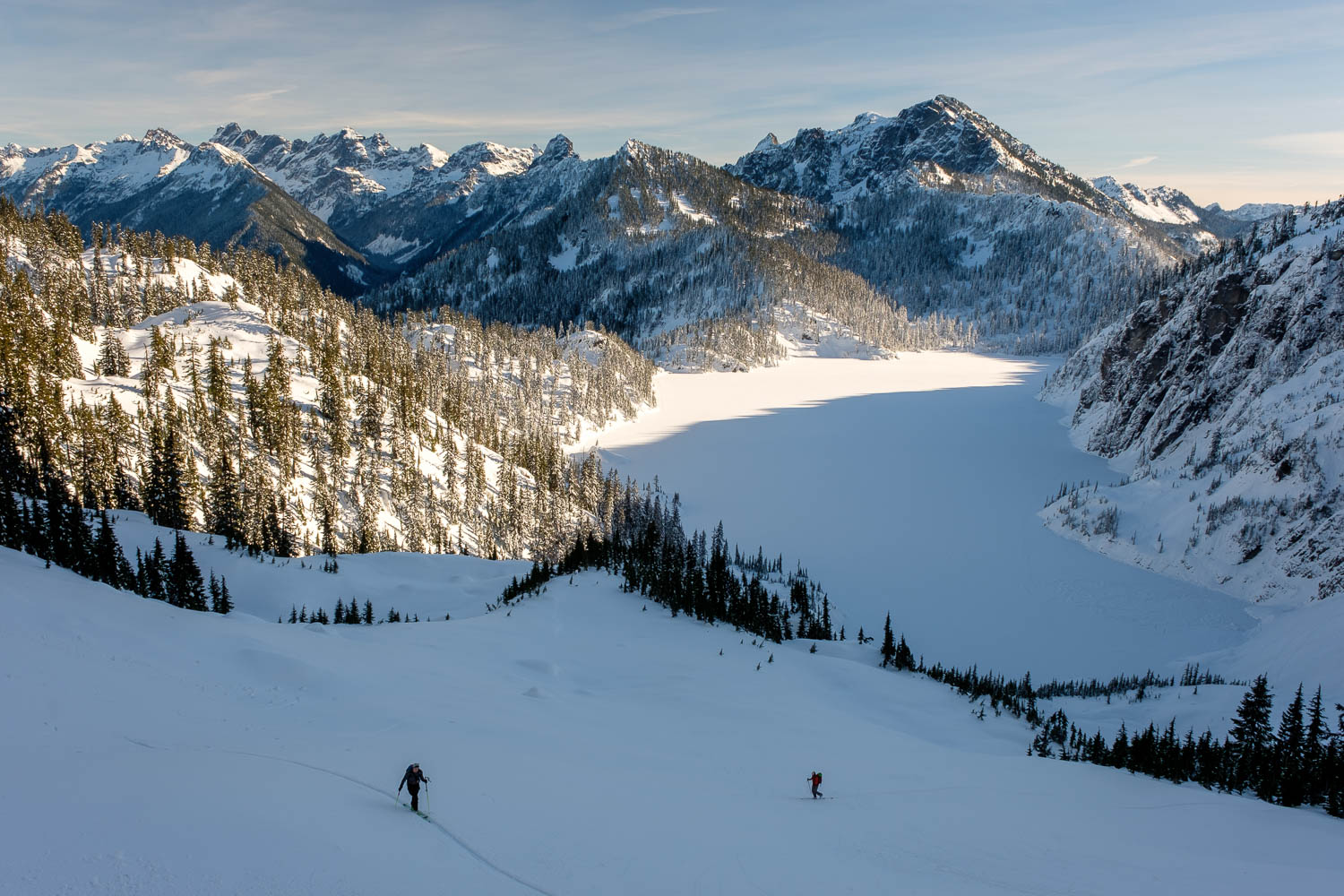 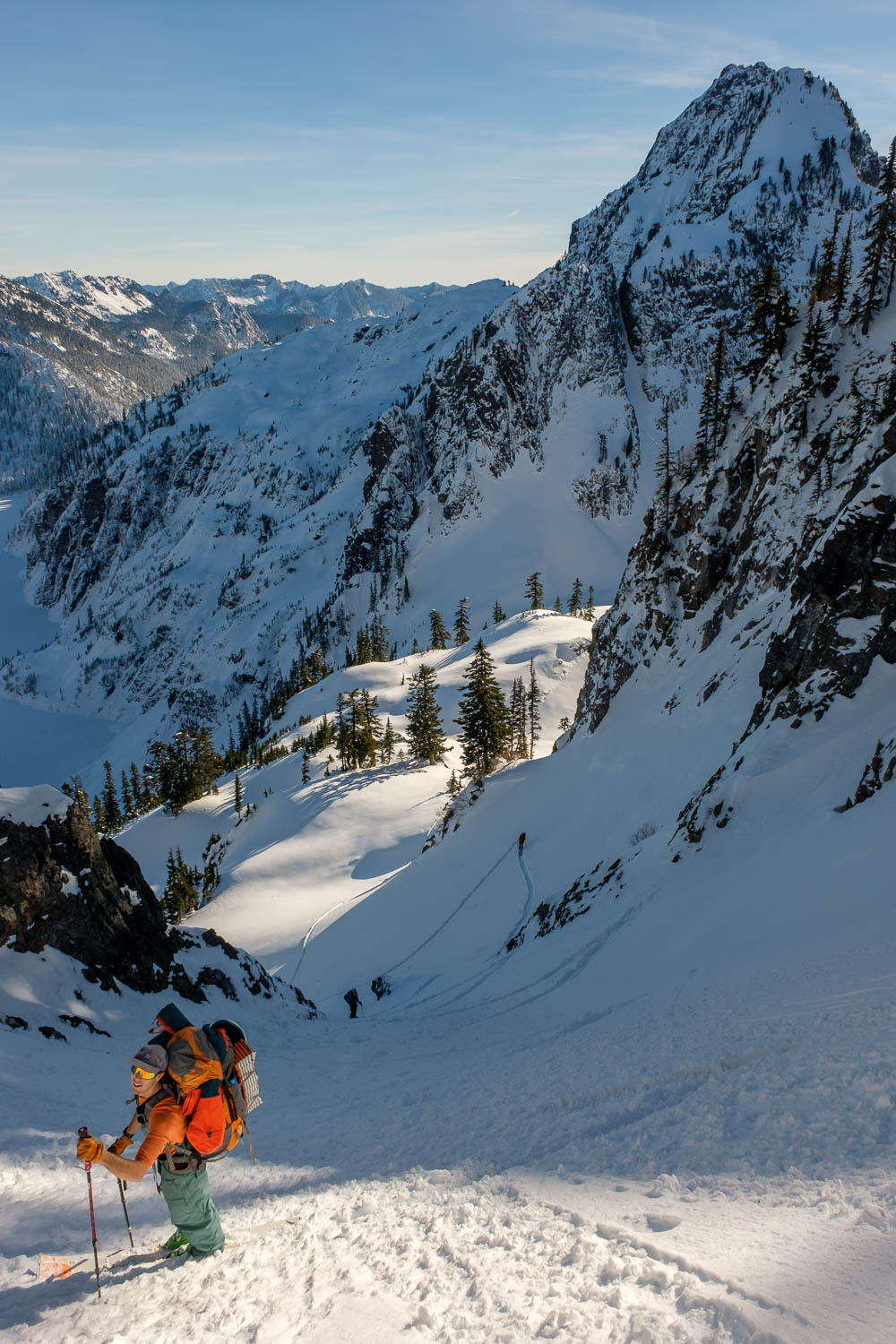 We skinned up to the bench above Chair Peak Lake, then back north and up one 200 vertical foot but quite steep gully, skinning the whole way. I was glad to not be doing this when it was too much warmer, as it definitely could have significant risk of loose wet slides with fairly high consequences. Above this gully, a very short and gentle basin up to the entrance to the Holy Diver at 12:10. Nice views of Preacher, which didn't seem to have too much snow - foreshadowing? We hoped not. 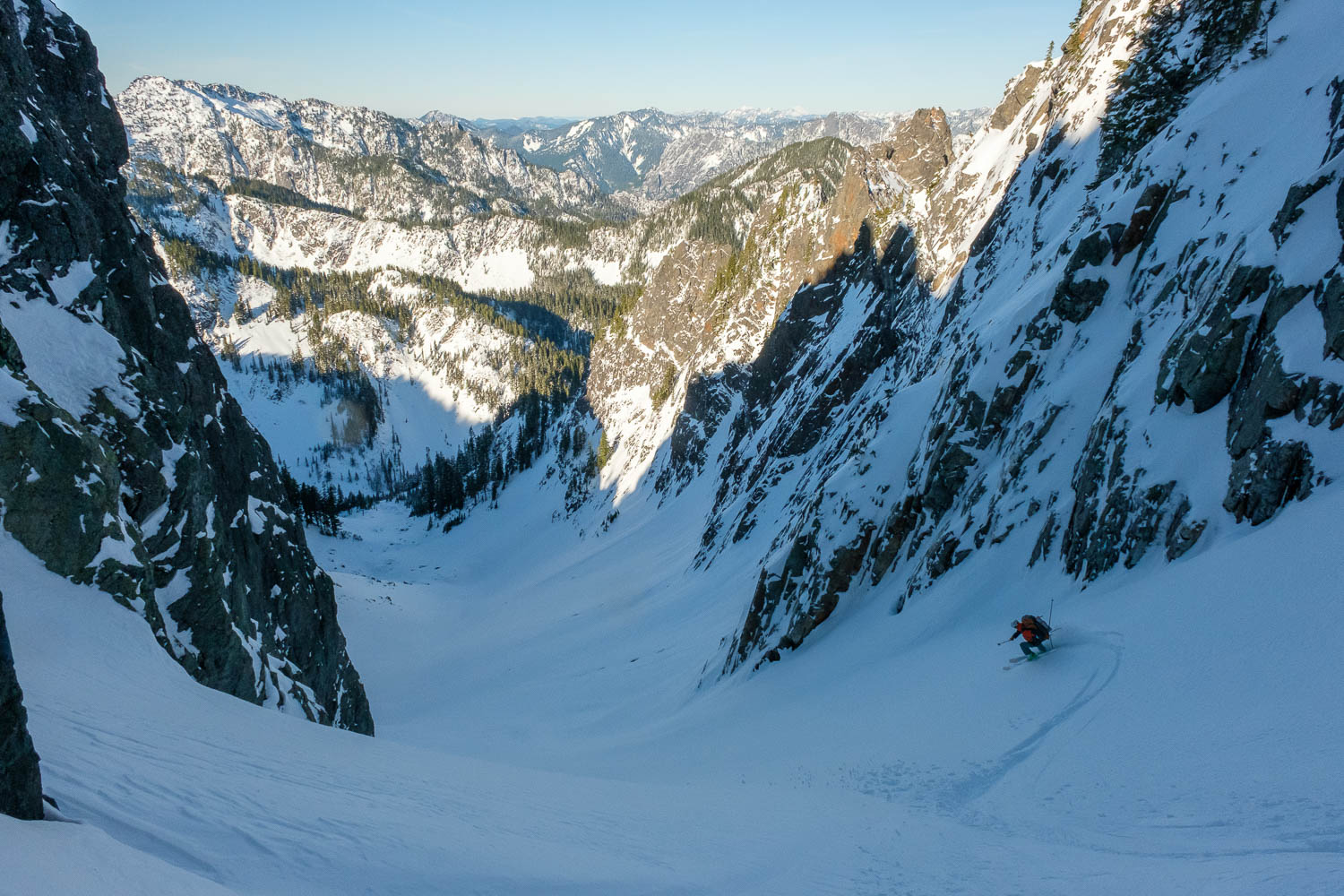 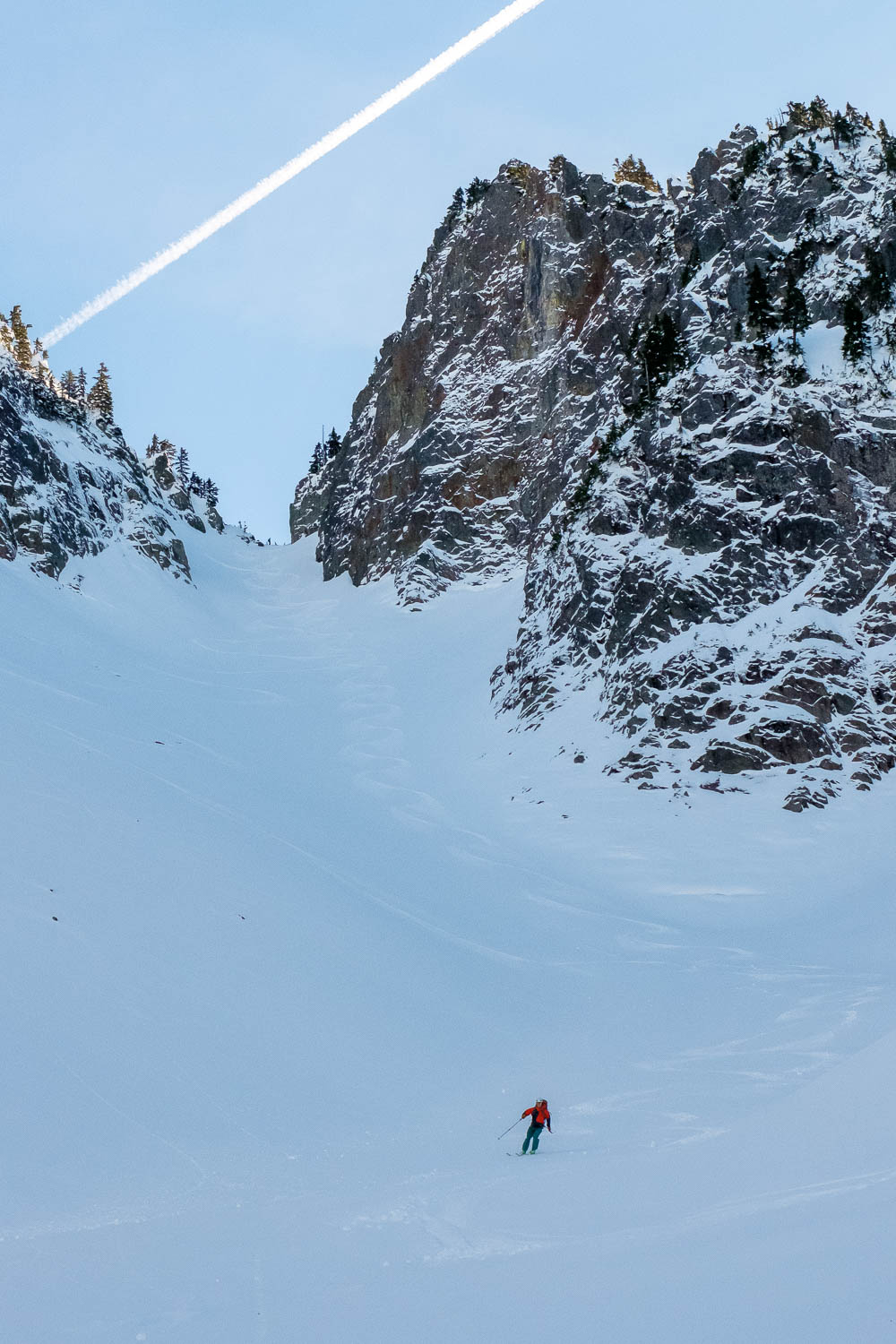 We ripped skins and dropped in. Absolutely gorgeous views and great skiing - steep for the first little bit then quite mellow. A bit wind effected in spots but mostly great soft pow, and Matt caught me singing the eponymous song while skiing lower in the Holy Diver. Down where the drainage turns north, coverage was surprisingly thin, and we had to shuffle and side step in a few spots. We put skins on a short ways above lower Wildcat Lake and skinned to the lake at 13:00 where we ate lunch. 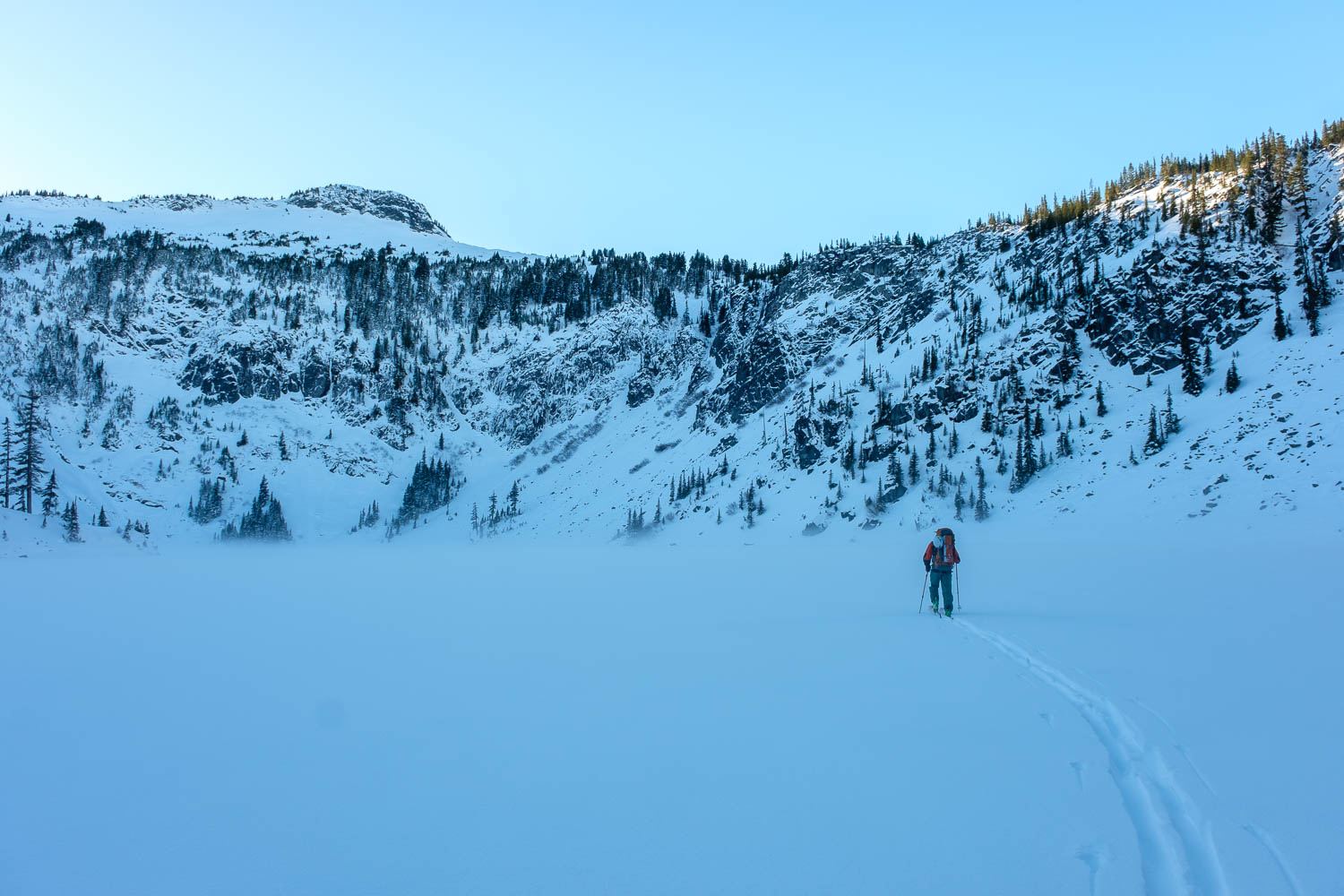 At 13:20 headed up to the upper lake, following the outlet, then filled some water to carry to camp. At 14:00 crossed the lake to the westernmost lobe, then climbed up the easiest route through steep slopes to hit the ridge between Upper Wildcat and the Derrick lake basin. There was a very strong temperature inversion at Upper Wildcat, with 16 degree temps at the lake and low 30s just a few hundred feet higher. 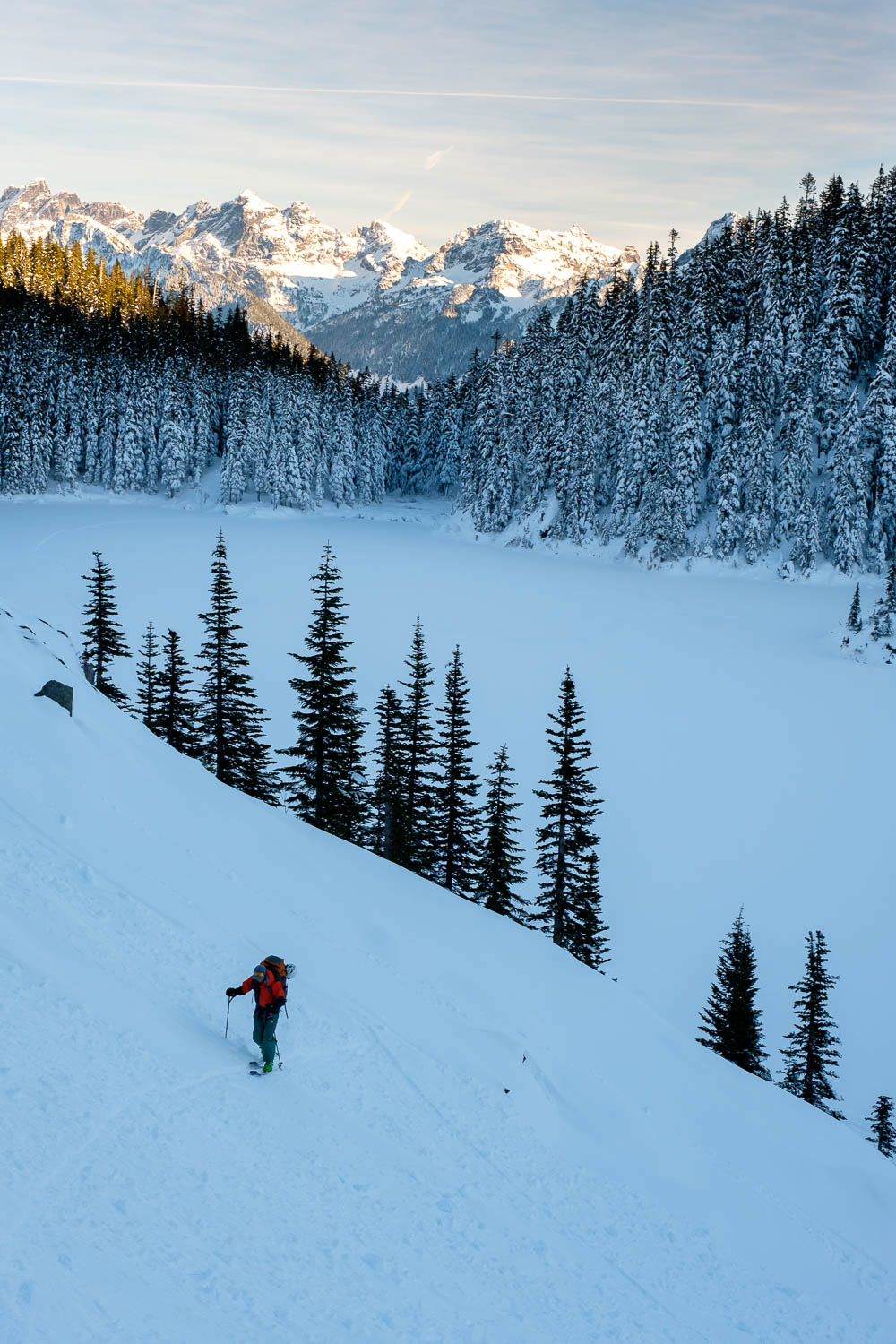 We hit the ridge at 4,700 feet and followed it southwest through some steep, slow, and brushy terrain with entertaining hand-over-handing up bushes. We made our way to the base of the North Ridge of Mount Caroline (Point 5885T) then climbed up easy terrain along the ridge with gorgeous evening views to a nice campsite in some trees below the summit block at 5600 feet. 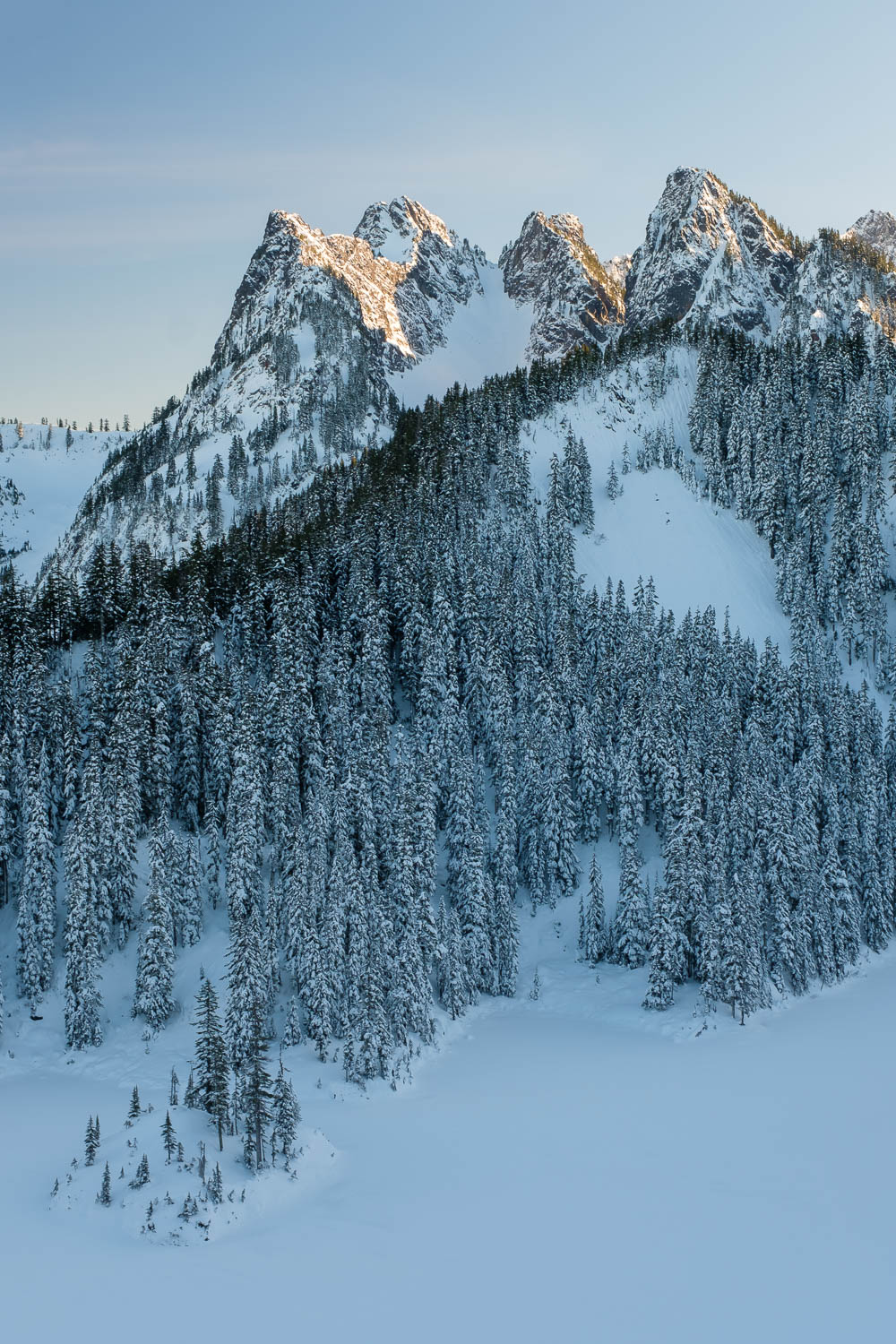 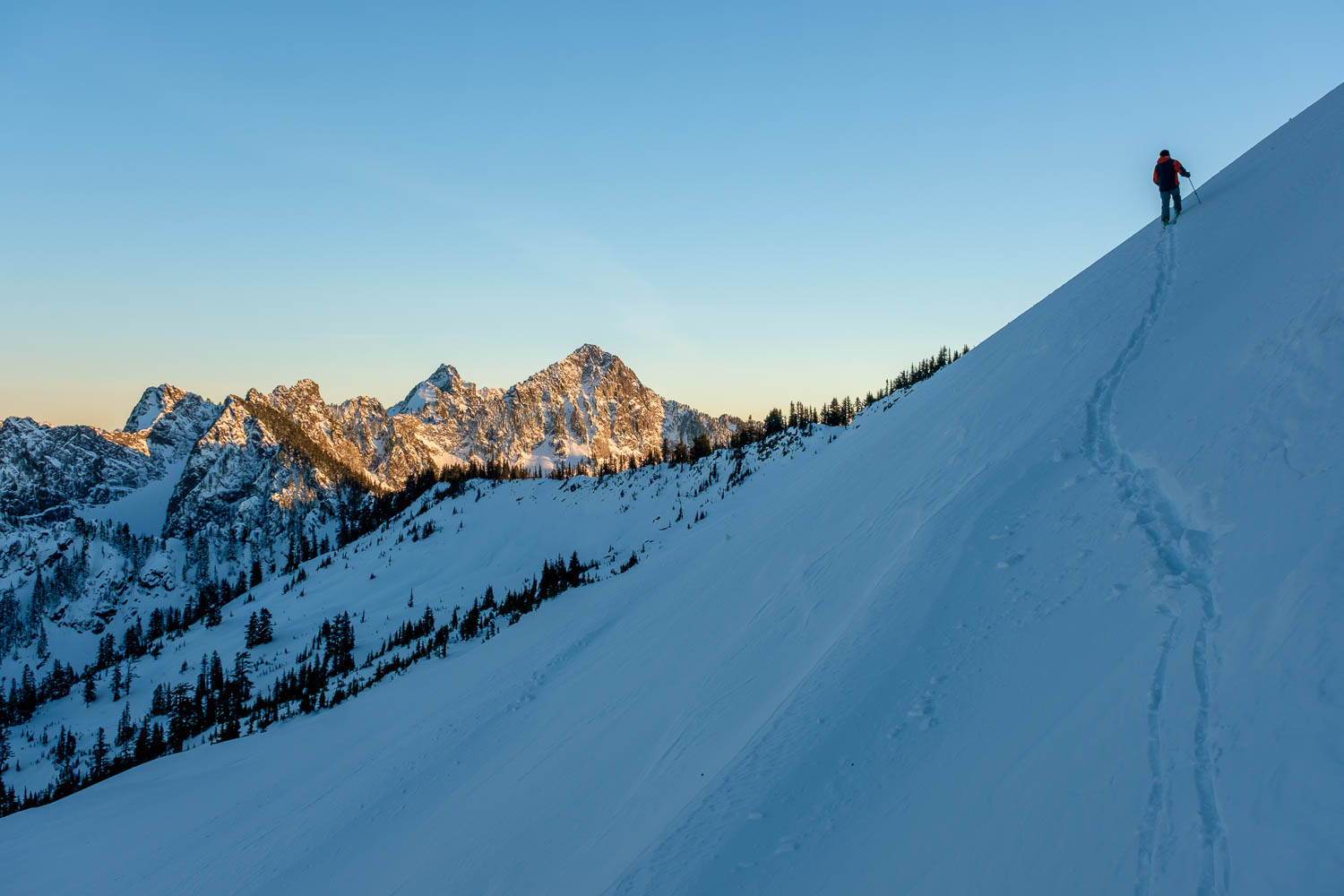 We enjoyed a lovely evening with great views of Kaleetan, Chair, Snoqualmie, Thomson, Chickamin, Lemah, Hinman, Daniel, Garfield, Glacier, and more. We melted snow for dinner and the next day, then Matt and I settled into the tent for our many hours of darkness. Overnight the wind picked up and there was a good amount of blowing snow and wind transport activity. 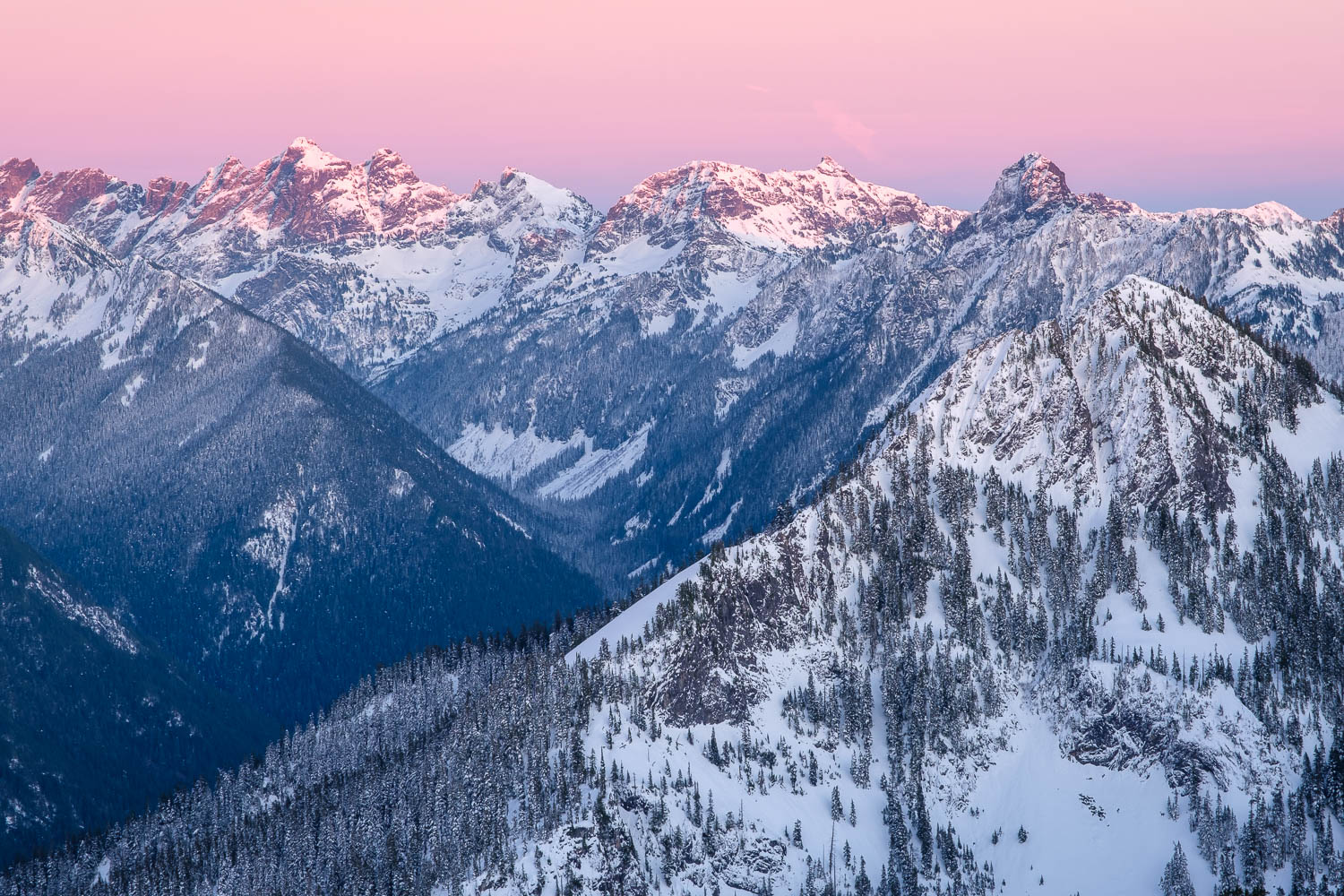 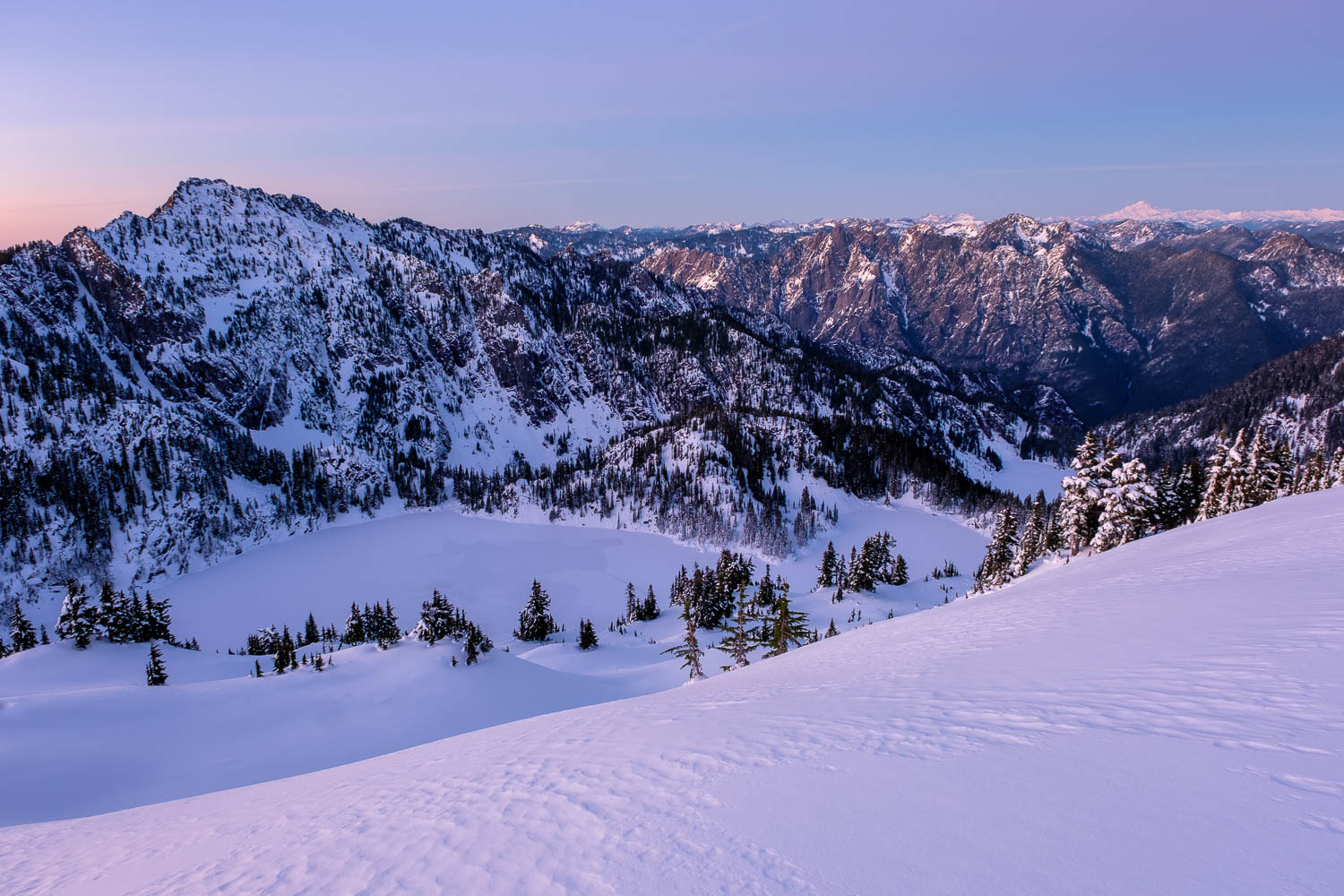 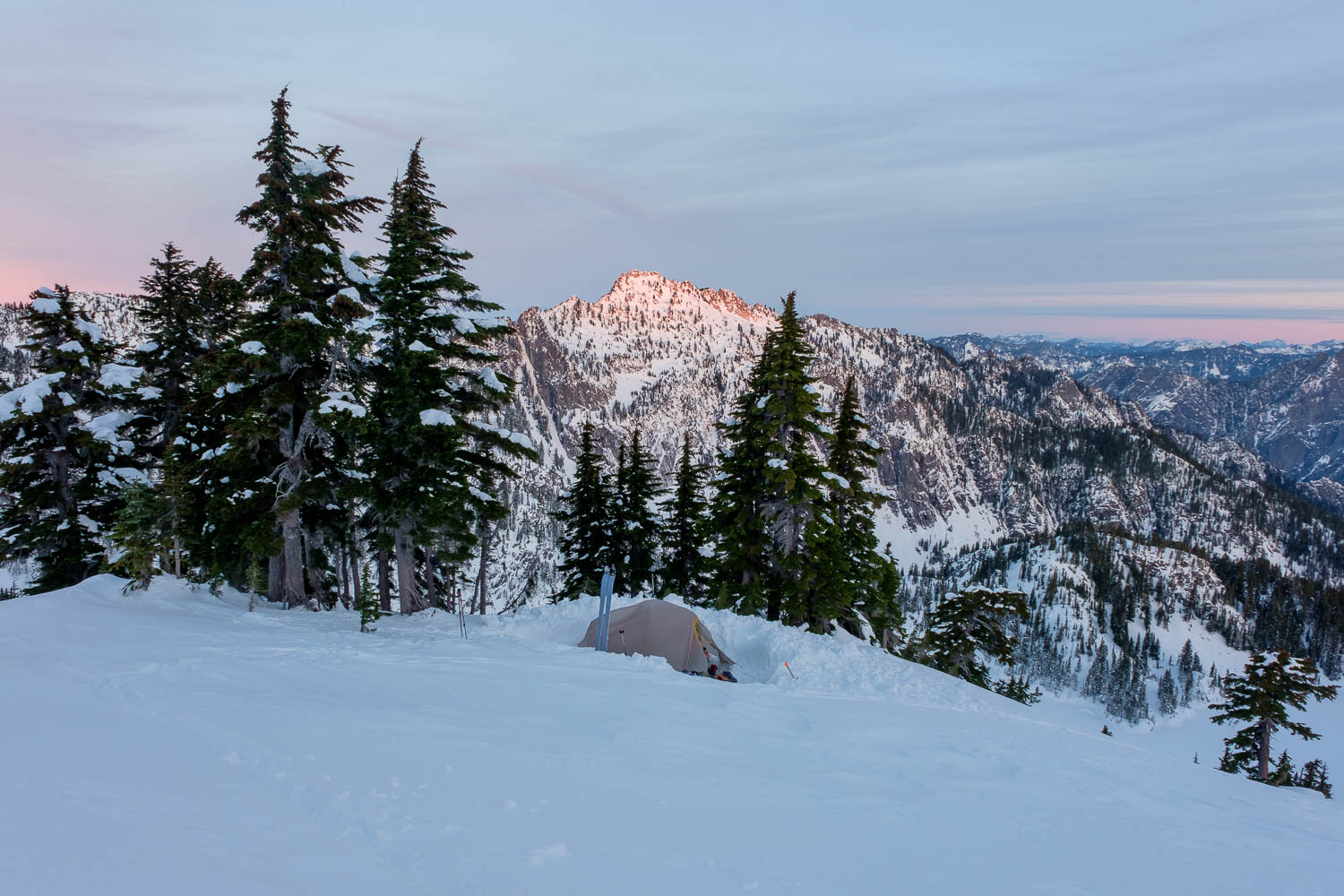 Woke up just before sunrise to take photos and pack up the tent, hoping to get a quick enough start to make it over to the Preacher Mountain Couloir with enough time to ski and still have plenty of time for the exit. We ripped skins and at 8:45 we dropped down and enjoyed lovely skiing to Caroline Lake, avoiding cliffs. Skinned up to cross the lake and exit the far side. 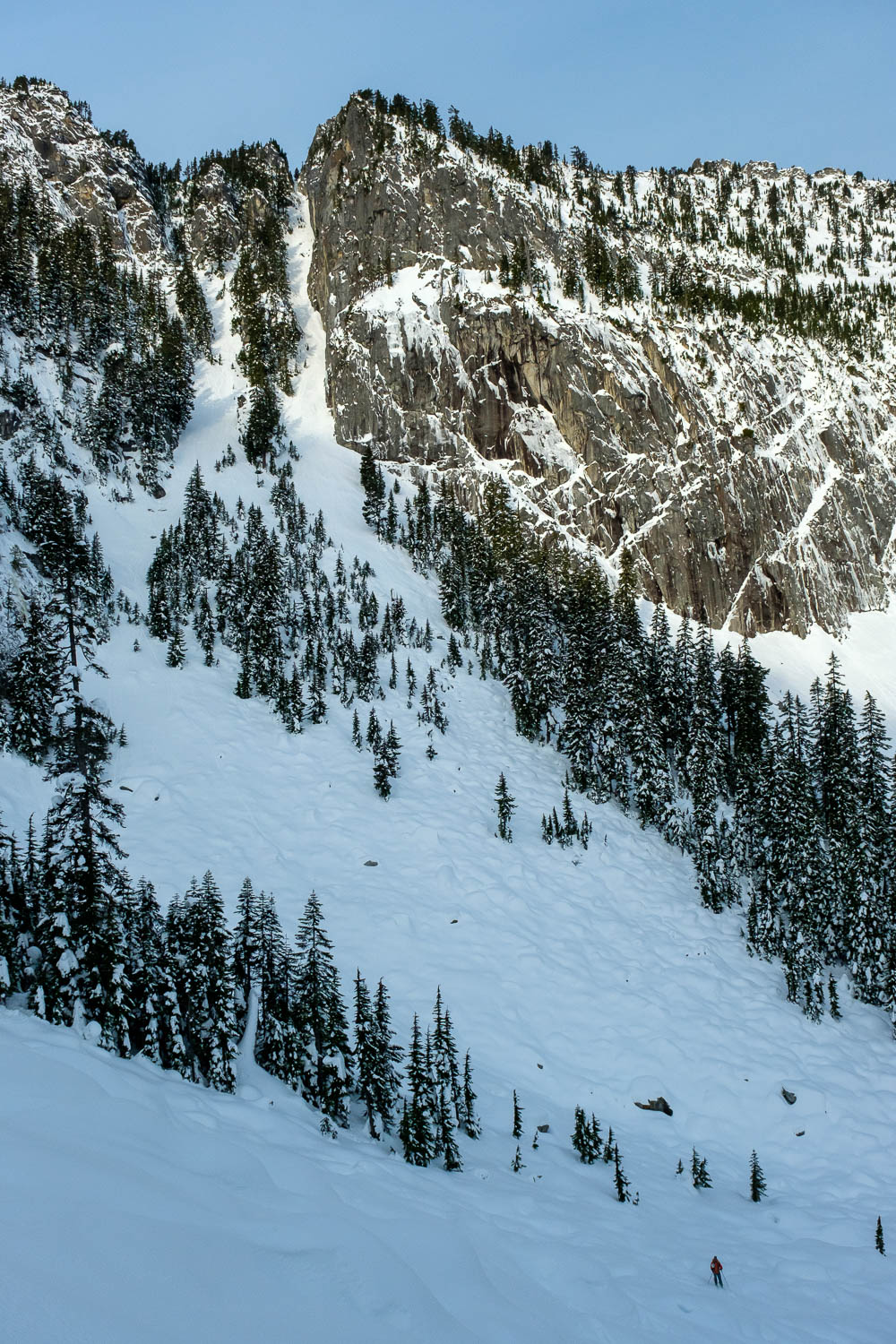 Climbed over a tiny divide, then ripped skins and skied down into the head of the Hatchet lake valley. 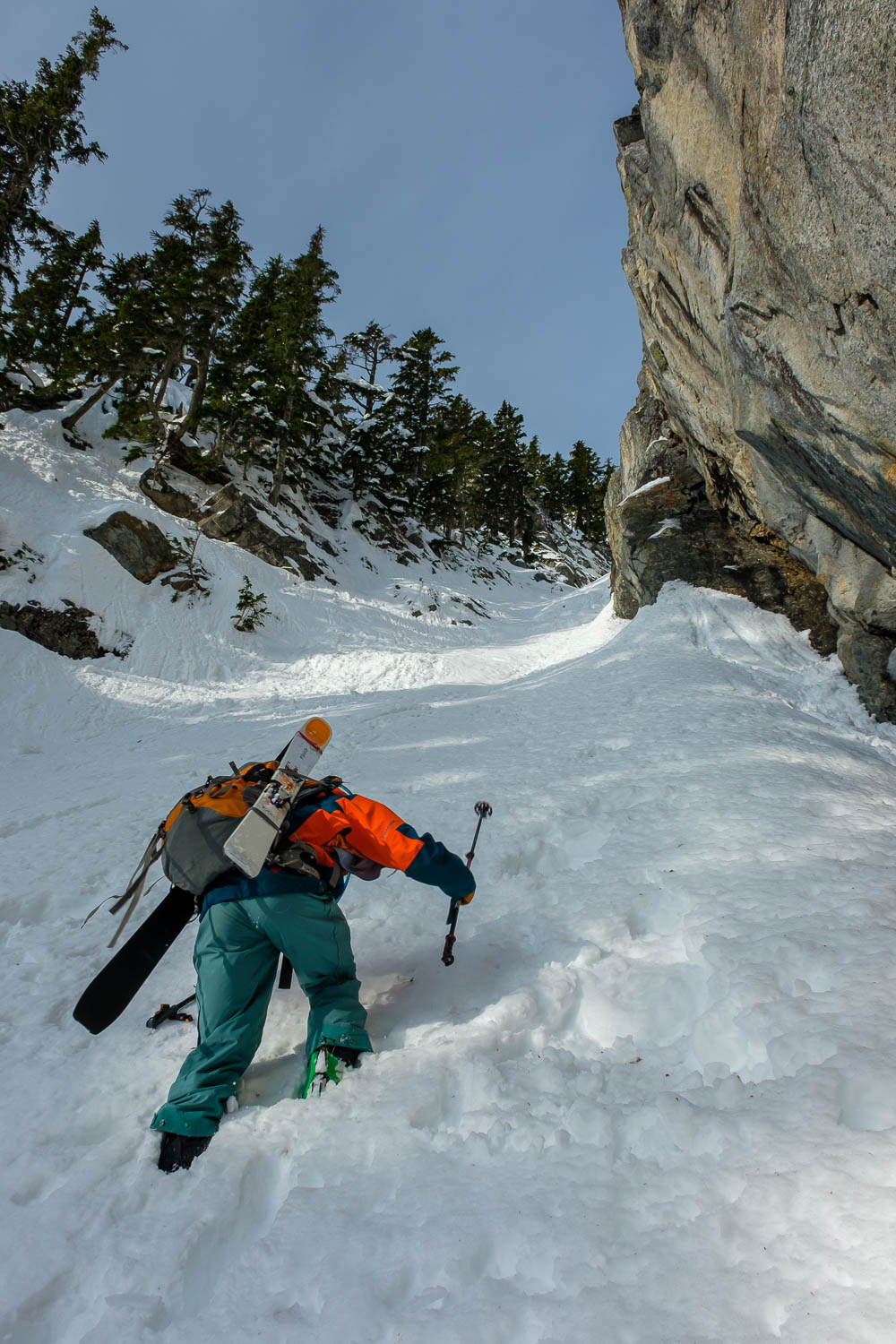 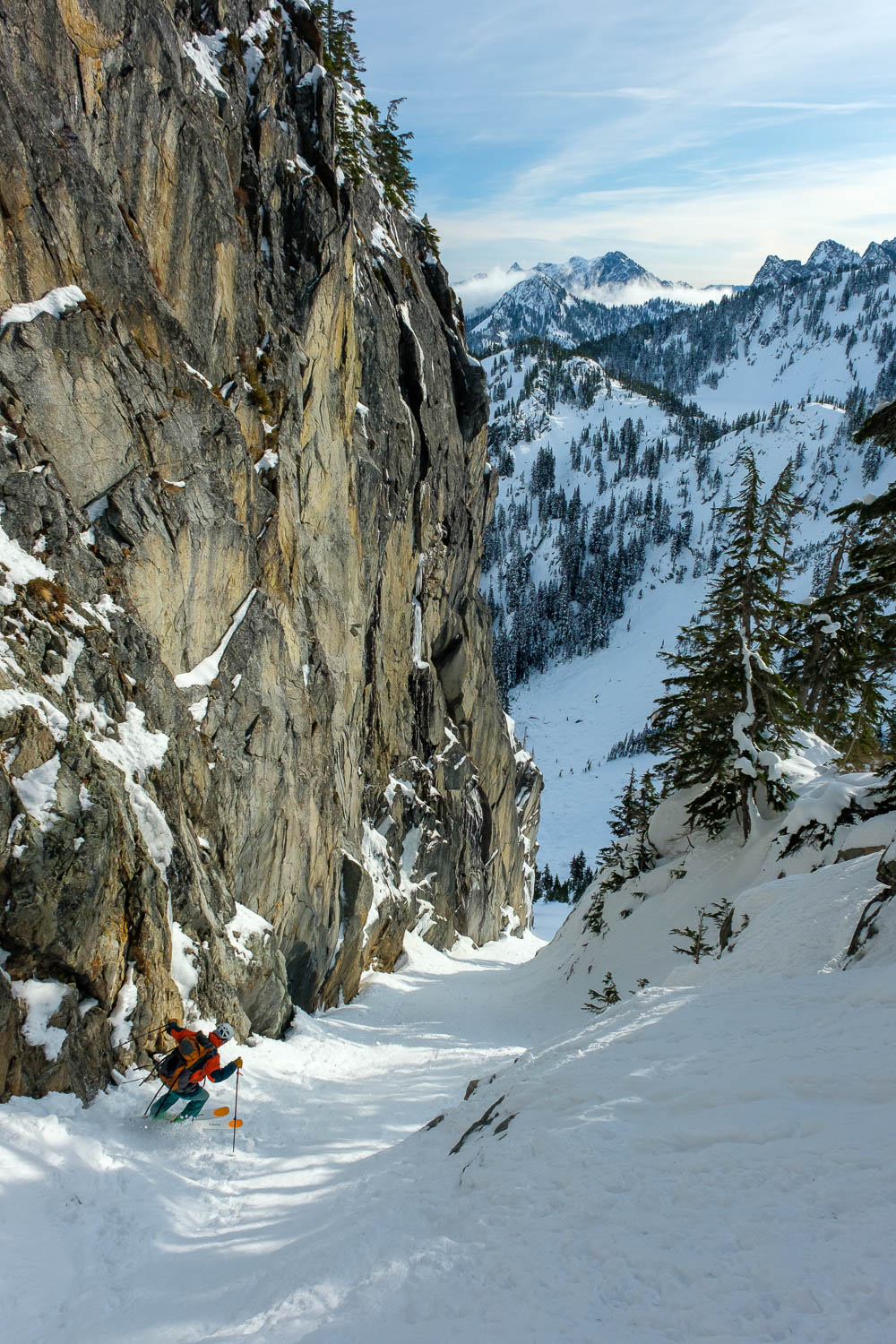 At 9:30 we put skins back on and climbed with packs to the top of the couloir fan around 4,750 ft, then dropped camping stuff at a large tree and continued up the gut of the couloir. We made it another 150 or so vertical feet before switching to booting, which was quite wallow-y - would have been nice to have ascent plates. The couloir is absolutely gorgeous though. After passing through the choke and where the couloir eased up a bit, we hit our bingo time and dropped in at about 5,300 feet at 10:45. The skiing was crusty and chunky with soft stuff underneath, but could have been a lot worse - good fun and very aesthetic. 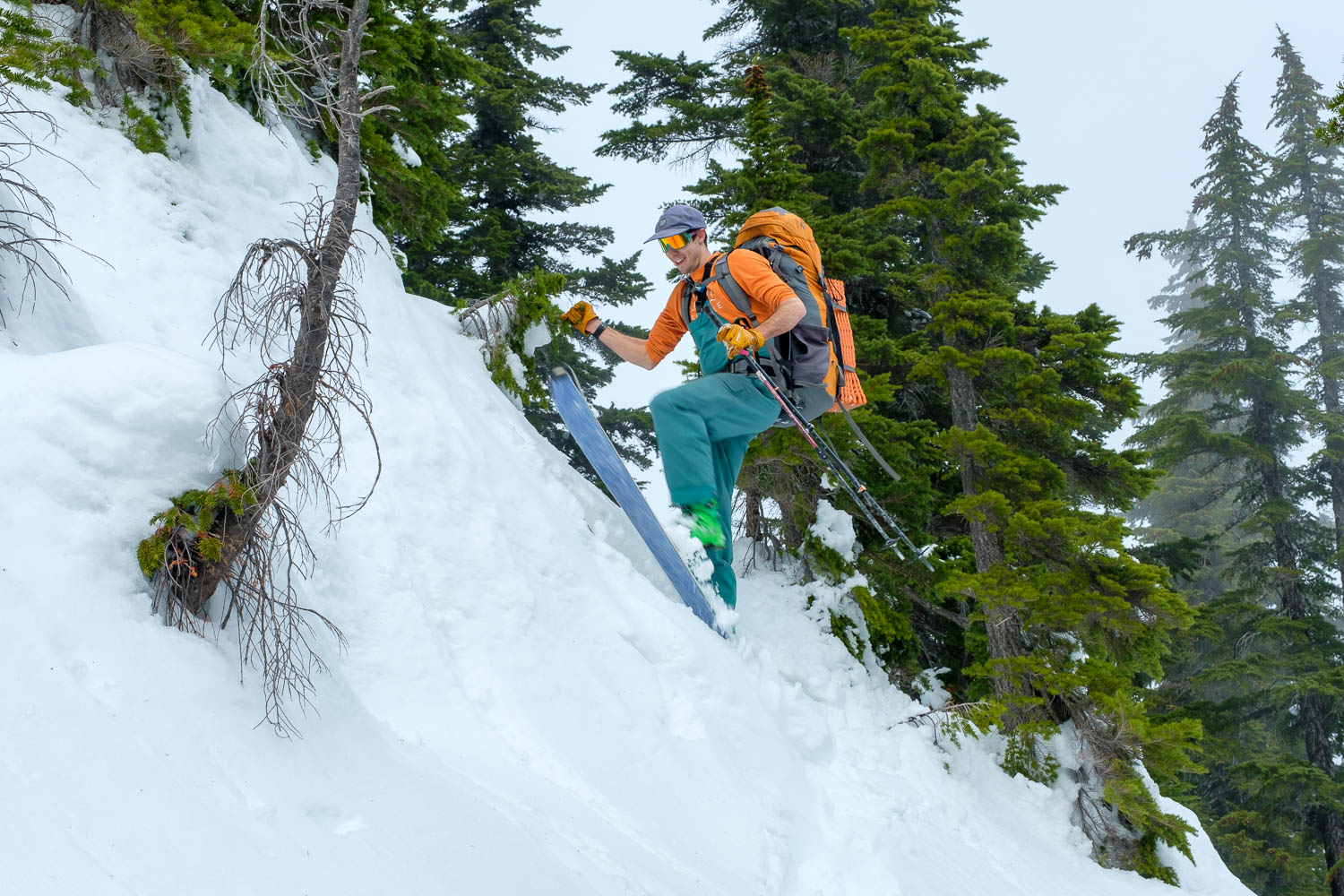 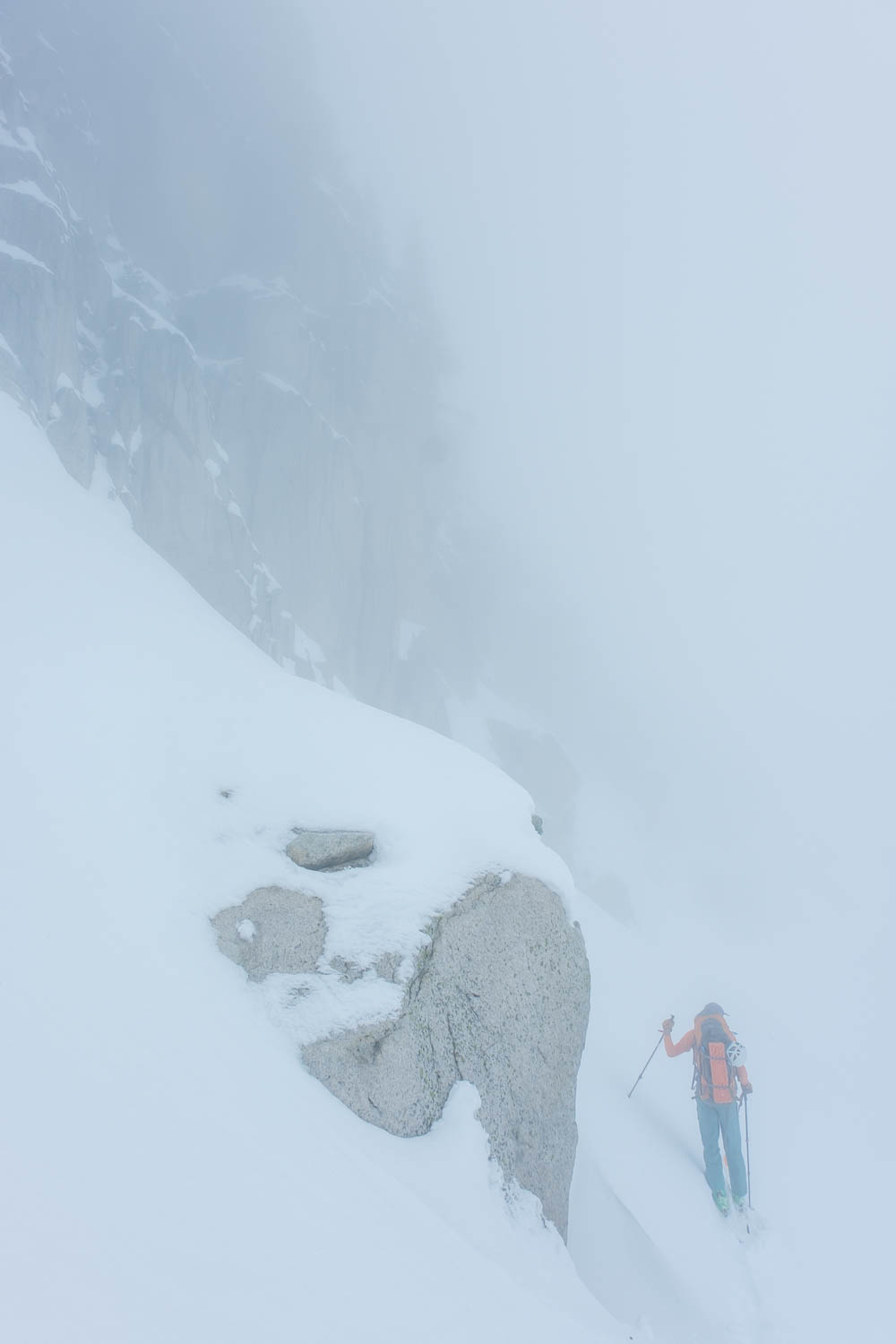 We retrieved our gear and cut skiers left to descend along the fan to Hatchet lake. Skinned up and at 11:15 crossed to the outlet and started working up the toe of the East ridge of preacher, trying to keep in the most forested and lowest angle parts. It took us about an hour to get to 5,000 ft, very carefully picking our way up the steep terrain. The weather was coming in, and it was lightly snowing with bad visibility. From there, the ridge was quite steep on both sides, and we skirted two rocky bumps to the south before dropping into the basin on the north side of the ridge and making a rising traverse in a total whiteout. We crossed the north ridge of Preacher just south of the notch between the aforementioned and Point 5675T. 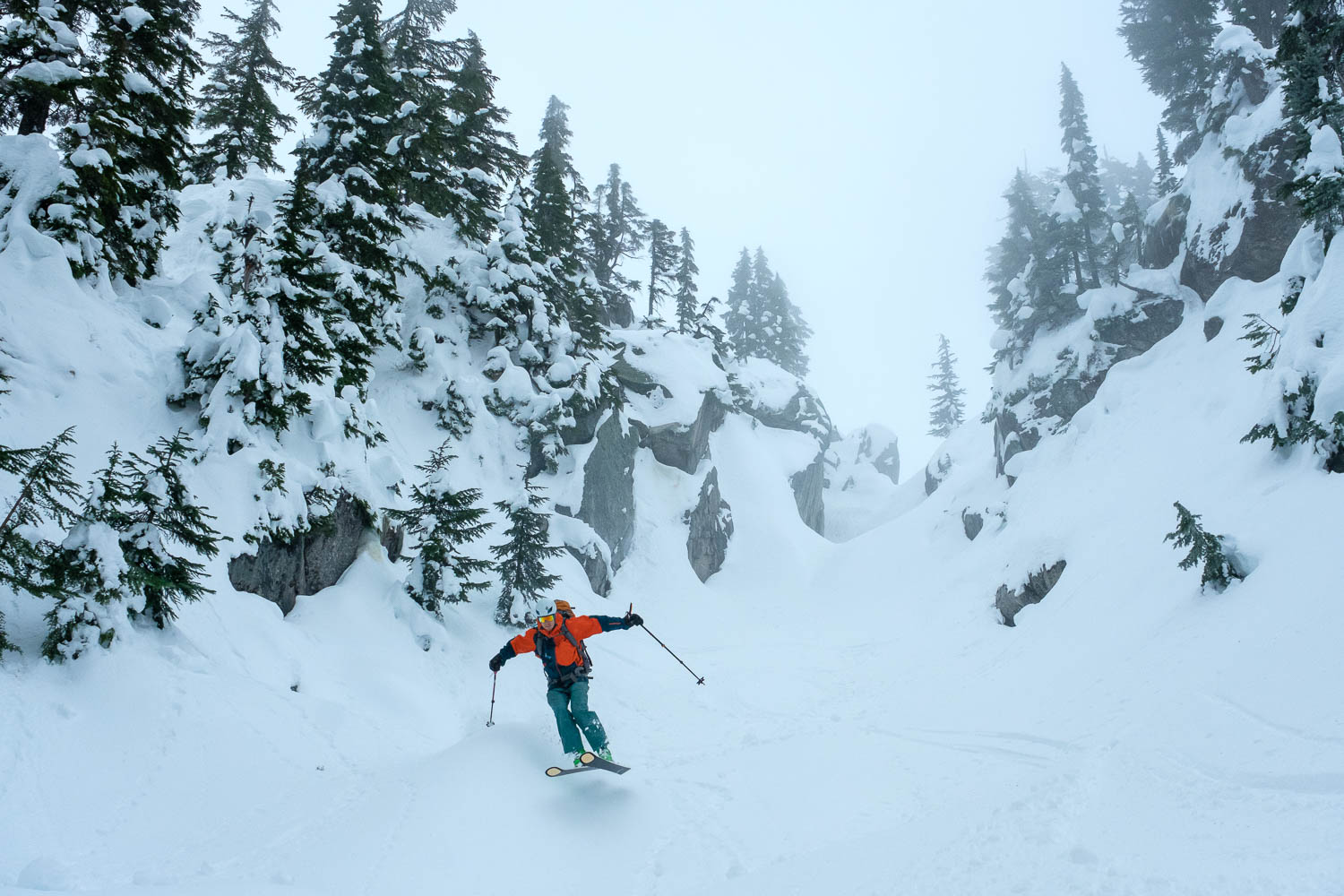 Ripped skins and dropped in at 13:30, skiing a much-better-than expected couloir down from the notch in the fog. This one needs a name! When the couloir opened, we trended fairly hard skier's left, dodging cliffs to hit the Rainy Lake outlet at about 3,300 feet at 14:00. 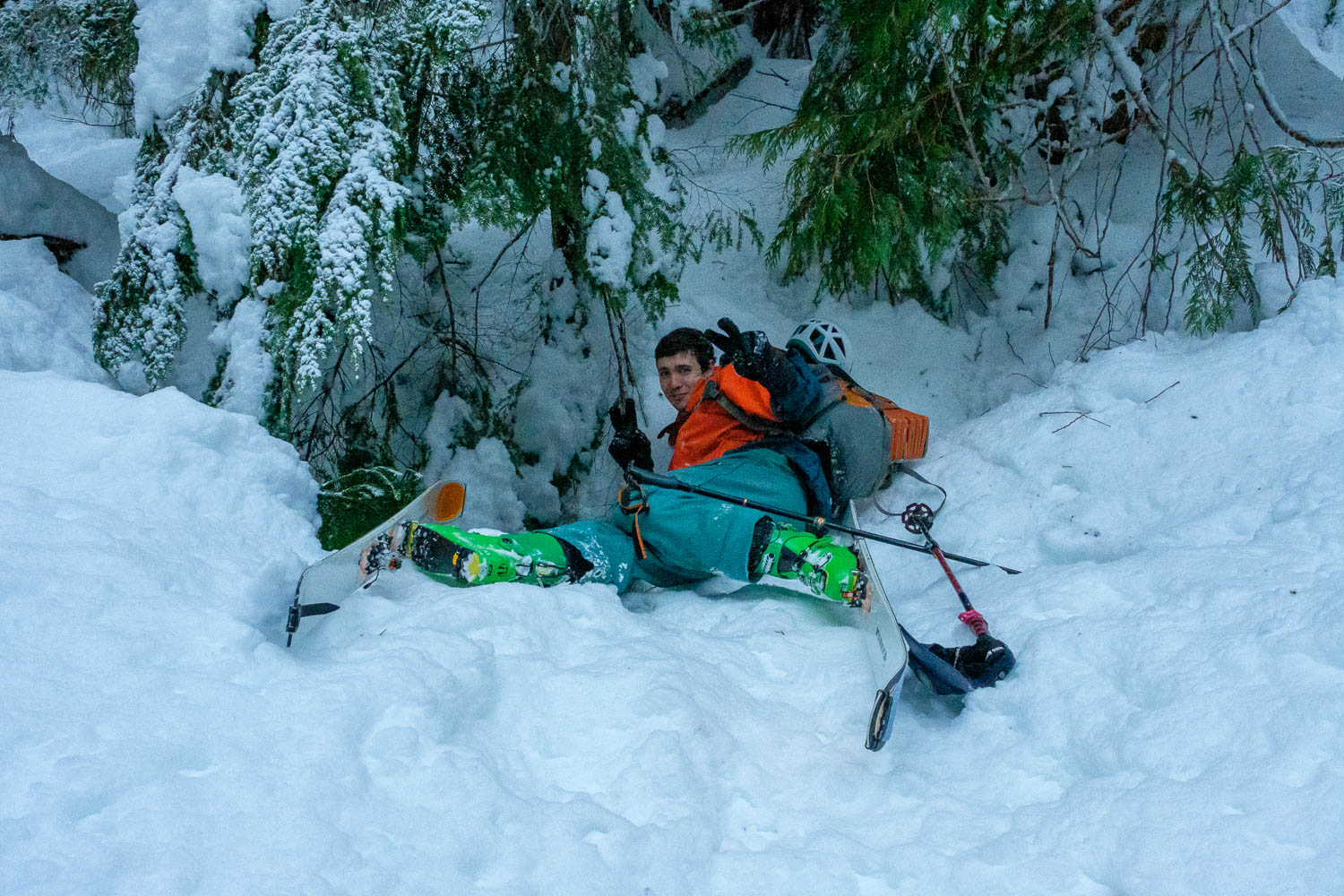 We attempted to keep skiing down and over downed logs and creek holes, but quickly admitted defeat and set ourselves to downhill skinning, quite slow at times with brush, downed trees, and lots of creek crossings. 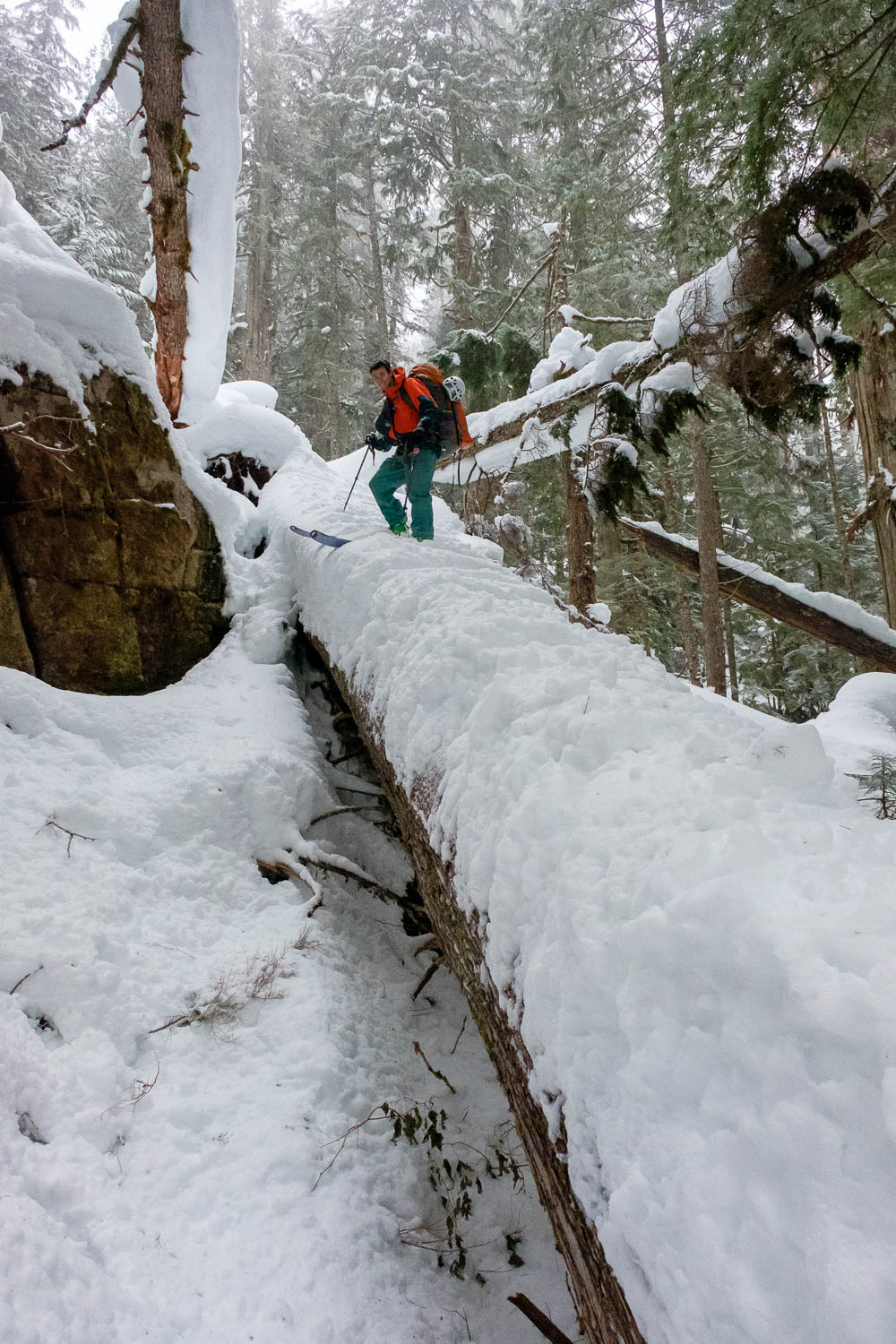 After an hour and a half, we were happy to see our first signs of the snowcovered trail at about 2,400 feet, but it was still snowy enough at this point to not be of much use. Another valiant hour of skinning and sidestepping down steep brushy slopes brought us to 1,700 feet, near where the drainage jogs NW, and, as it was getting really truly dark, we put the skis on our packs and continued plodding downhill through about 8 inches of crusty snow. From here, the trail wasn't too hard to follow with care, and some very fresh Mountain Lion tracks led the way. We hit the Pratt River trail just before 17:30 and were at Matt's car not much later, the only car in the snowy Middle Fork TH lot. It was snowing all the way down to the road, and we were appropriately soggy and happy to have dry clothes waiting for us. 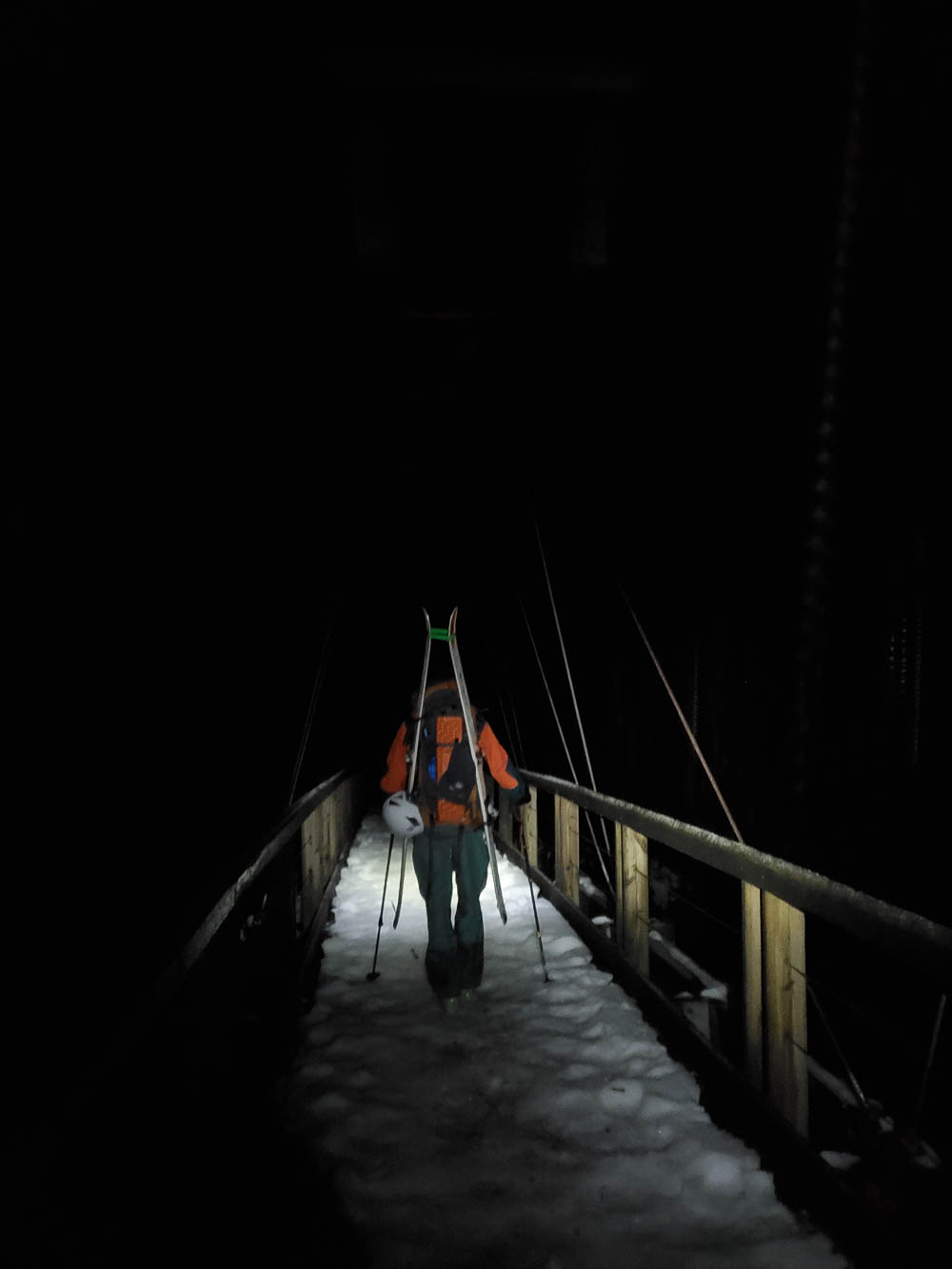 We brought ski crampons and trail runners, and used neither. All in all, a fabulous trip to some less-frequently-traveled areas of the Snoqualmie backcountry, and it was fun to do a through trip. It would have been nice to have a bit more time (or just longer days) to explore more of the terrain we passed by, and to do more skiing, and it's too bad the weather came in as we were climbing up Preacher Mountain on the way out, as it would have been nice to have some views to close out the trip. More photos with captions here.

Great photos and writing. Looks to be a beautiful area back there

Fantastic! Thanks for the TR! Sounds like a great Cascadian adventure 🥳

Thanks for the great trip report. We were skiing on Saturday and saw your skin track heading up to Roosevelt. Sounds like a great trip.

Nice! Great photos and I like your route. The unknown and adventure often go hand in hand. A bit more snow and those forest logs could be fun!

Super cool trip -- I love this kind of bush-whacky traverse. Makes me want to start looking at all the crazy lines I have drawn on maps over the years.... thanks for posting.

micah, you absolutely should!

Rad! Made a similar overnighter a couple years back. We swung a left after the Holy Diver and skied a nice line into Wildcat Lake. Our route back took us over Caroline and Kaleteen. There's plenty of variations with that terrain out there, just tough to know if and when youll be getting into a shwack!

Thanks for reviving the memories.

Fantastic trip!  really cool to see the exit out the Middle Fork.

Top-shelf TAY-stoke. Thanks for taking us along!