On Friday Mark Dudzinski, Bob Whyte and I skied the Cascade-Johannesburg Couloir. Cascade River Rd is gated at mile 18 but snow-free (aside from the remnants of a massive avalanche) to the last hairpin before Cascade Pass trailhead. Bikes made the approach a breeze. We stashed our bikes at the hairpin and skied across the river, which is still covered with snow, to the apron of the CJ. From there we booted 3000’ straight up to the Cascade-Johannesburg col. We moved quickly through the choke and the steeper sections that offer no shelter from falling debris – a 4AM start got us through the most dangerous part before things got too bad. The morning fog cleared as we ascended and we reached the col in spectacular bluebird conditions.

The descent of the CJ involved more survival skiing than I would have liked. The top and bottom portions skied OK, but the choke was pretty trashed from all manner of frozen water running through it from the Cascade & Johannesburg summits. There were plenty of runnels, refrozen debris piles, and refrozen bed surfaces to navigate – generally positioned right where you least wanted them. I was psyched to ski this line after eyeing it for a couple years, but now I feel the need to return earlier in the season to get it in better condition. While descending the apron one member of our party got tackled by a refrigerator-sized chunk of runaway serac from the Sill Glacier. He took it like a champ and we were able to laugh it off after verifying he was OK. Scary stuff though. While biking back down the road we came face to face with a huge black bear, one of the biggest I’ve ever seen. Never a dull moment at Cascade Pass.

On Saturday Bob and I headed over to Mt Pugh to ski the NW face. Pugh gets surprisingly little attention from skiers given the ease of access, routefinding etc. We didn’t see any tracks or other evidence of human activity on the upper mountain, although a party of 3 was coming up behind us in the afternoon. Snow starts at about 4300’ on the approach trail. We followed the summer trail all the way to 6300’ where we transitioned onto the NW face. 2 chutes reach through cliff bands to connect the upper & lower portions of the NW face - we chose the lookers’ right chute for the ascent and the skiers’ right chute for the descent. After spending 30 minutes on the summit admiring the views of Glacier Peak, Sloan etc we started to make our way down. Conditions were a bit firm for our descent of the NW Face at 11 AM, but softened up nicely as we worked our way down the mountain. We exited the face onto the Straight Glacier and continued making turns down the glacier until the terrain started to flatten out, then ascended the ridge that separates the Straight Glacier from the next drainage over to the West. We rejoined our ascent route at 6200’ and skied a couple thousand more feet of corn before putting sneakers on and hiking down to the car to wrap up a fun couple of days in the North Cascades.

Booting up the CJ 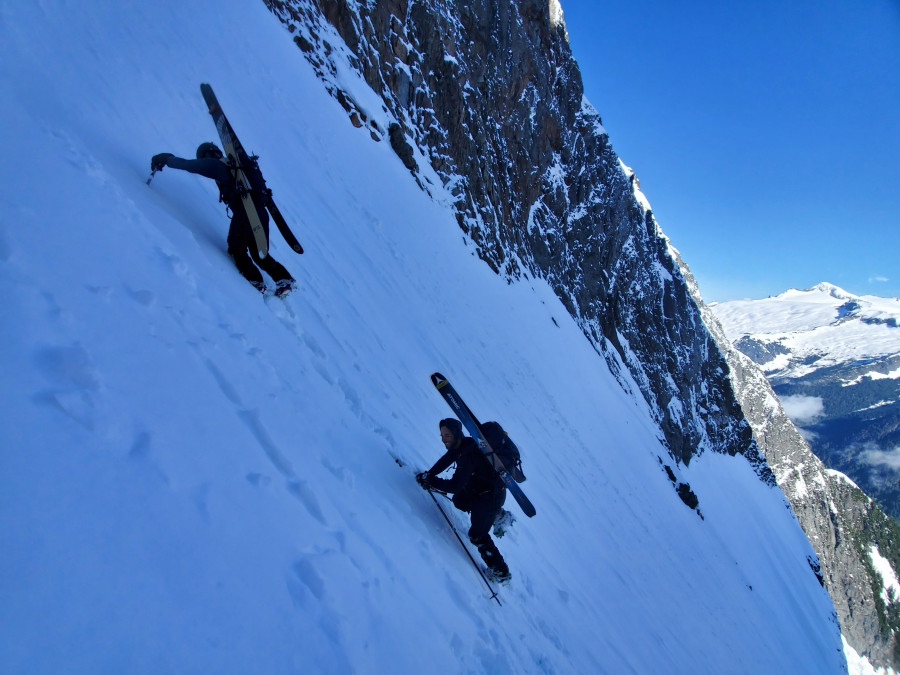 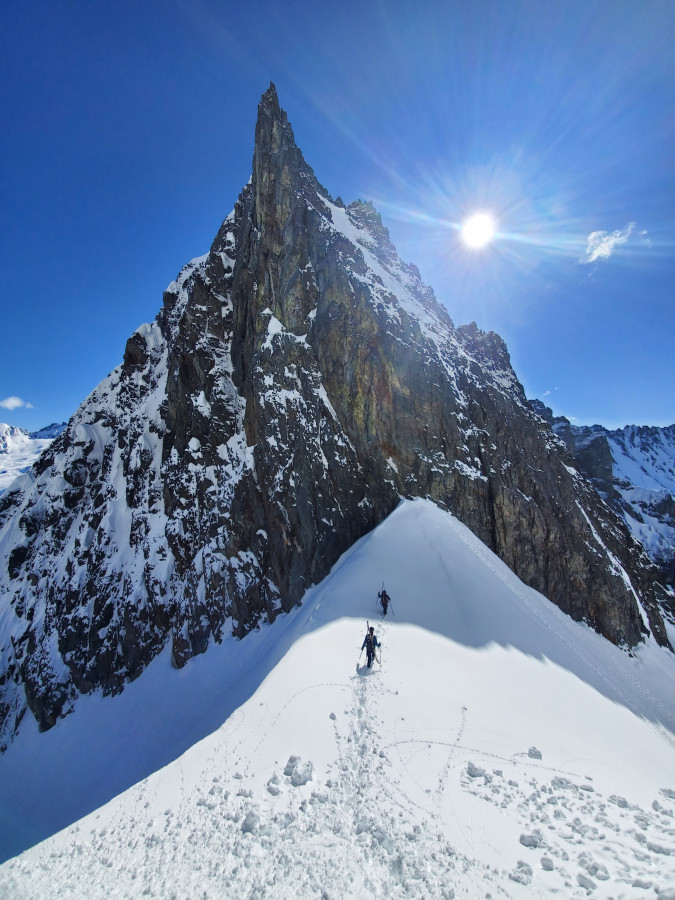 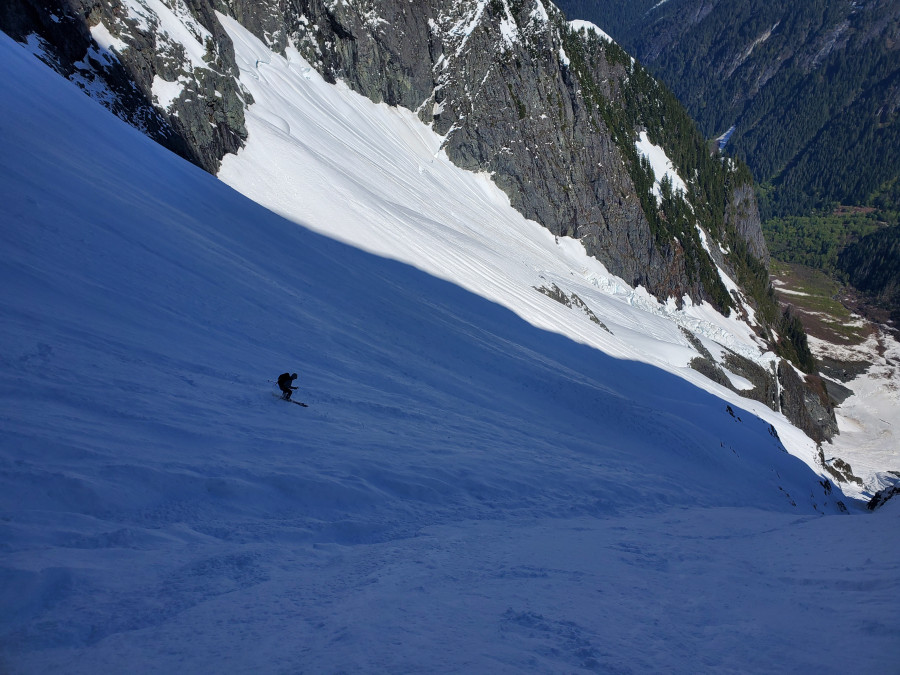 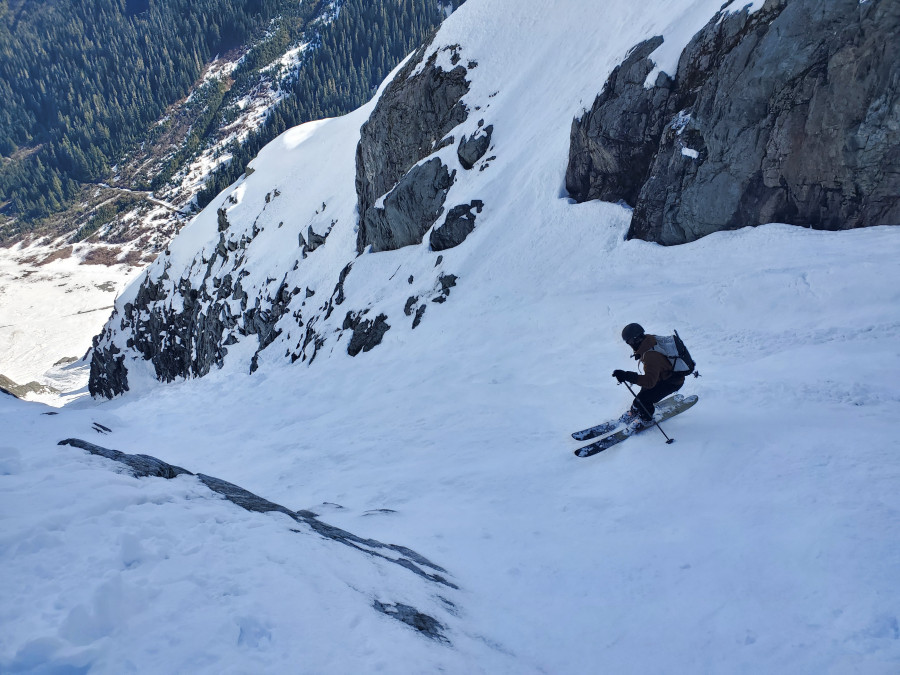 CJ from the road 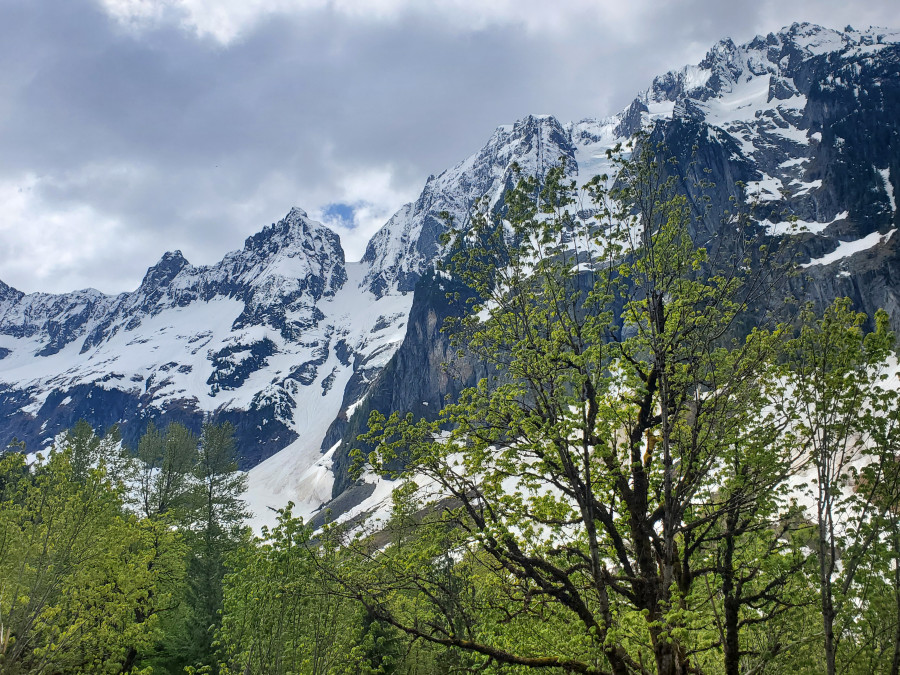 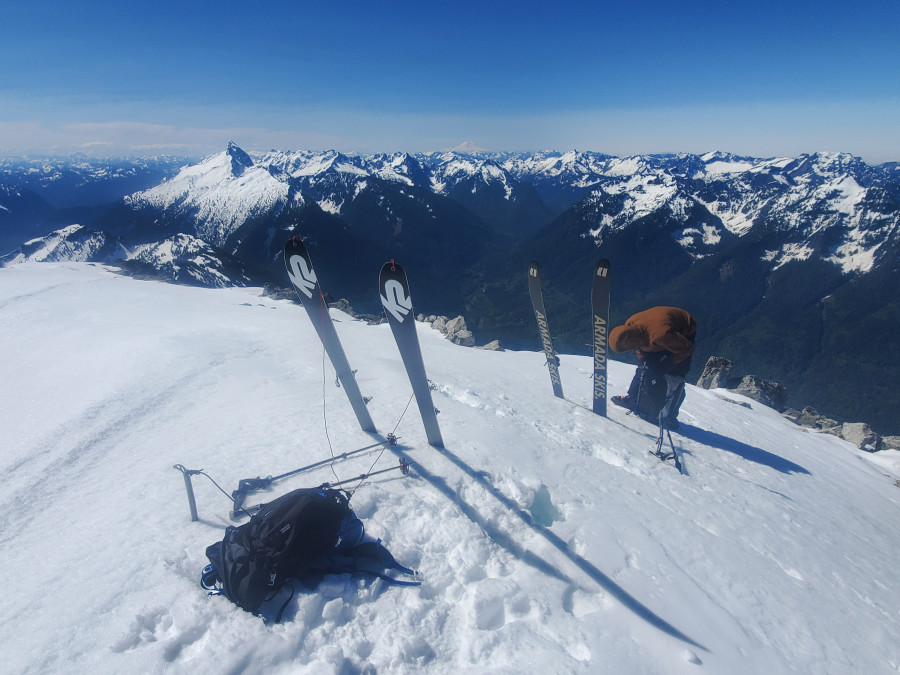 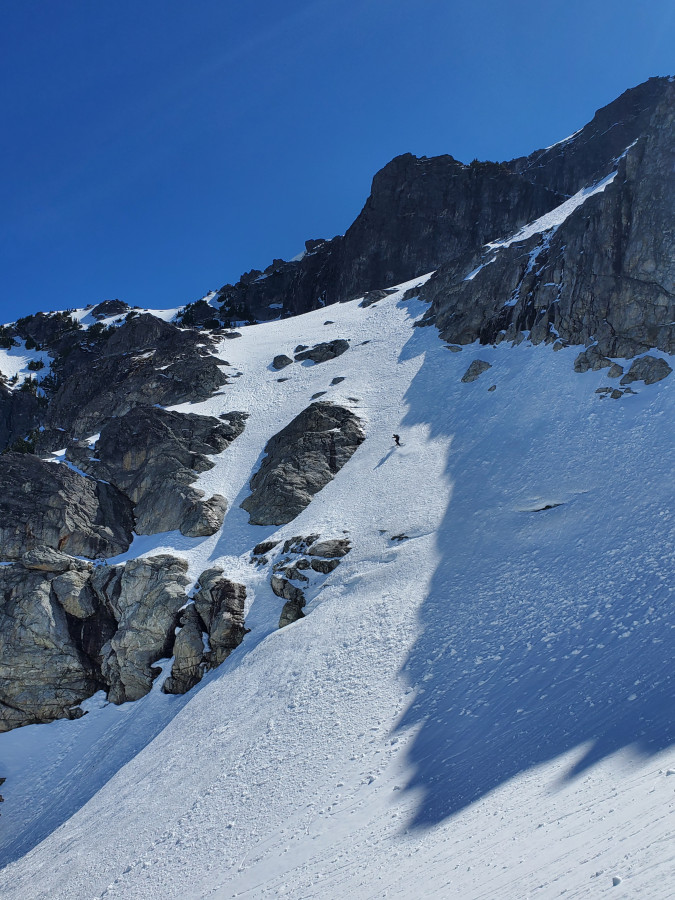 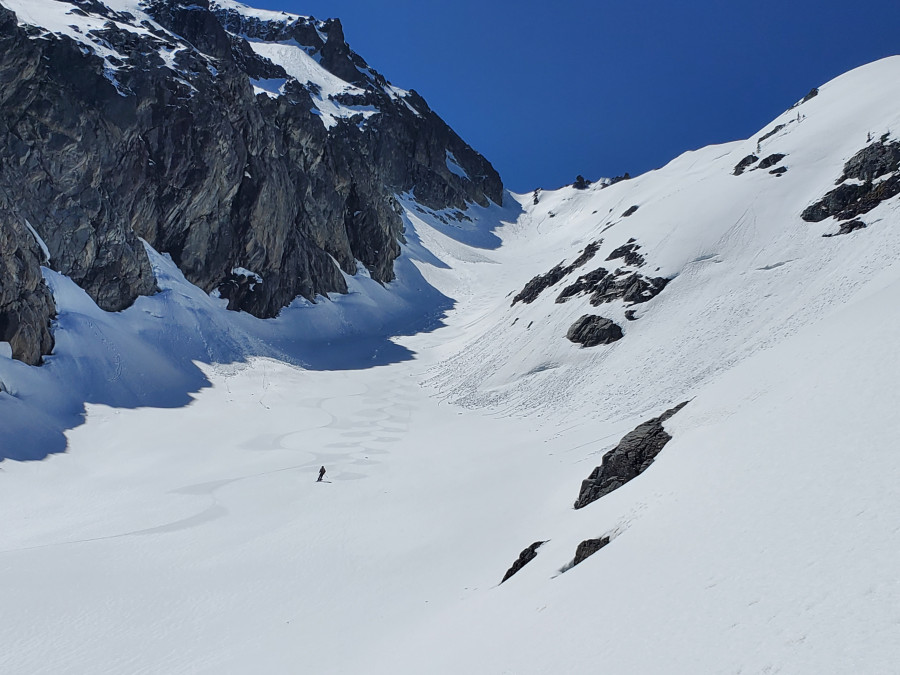 Skinning back up below the NW face of Pugh 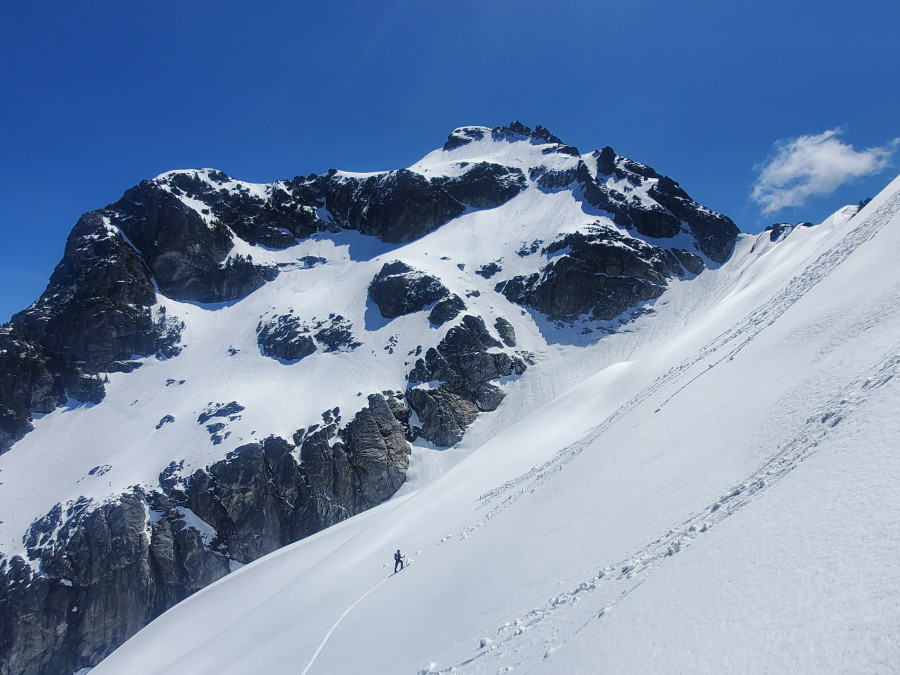 I like the "safety line" at the top that kept all the gear together. 😀

@Zap, the line is actually for towing my skis behind me while I'm booting, but perhaps you're onto something here. Given the number of posts I've seen by people whose gear seemed to mysteriously jump out of their packs and hide in the snow while they were out skiing, I'd say there are plenty of folks around here who would benefit from using a safety line to keep all their gear together...

Way to get it!  Great line.

Pugh looks funner than getting tackled by ice blocks, for sure!