On Sunday Jeff Wong, Lucas Cairns, Tom Skoog and I used the first true spring cycle of the season to ski the SW Face of Buckner via Sahale Arm & Horseshoe Basin. Cascade River Rd can be a frustrating place to ski, but I’m not sure it gets any better than a good day there, and Sunday was one of the best.

Jeff and I had been up on Cascade River Rd since Thursday night aiming for a double dose of Buckner – our original plan was to climb and ski the N Face via Boston Glacier on Friday, rest Saturday, then climb and ski the SW Face via Horseshoe Basin on Sunday. A number of factors conspired to keep us off the N Face on Friday. The peaks north of Cascade Pass, including Buckner, were socked in for most of the day. The 18” of fresh snow was not well bonded to the layer beneath. And if that wasn’t enough, we simply couldn’t get there. Two sudden cornice collapses along the Boston-Sahale ridgeline dissuaded us from continuing that way, and traversing below the ridgeline to the point where you can drop onto Boston Glacier involved climbing rotten snow on very steep, very exposed slopes. It was an easy decision to bail.

On Sunday we left Eldorado TH at 4AM under clear skies. With a fat snowpack and a solid overnight refreeze, travel up Cascade Pass & Sahale Arm was fast and direct. We dropped into the chute that connects Sahale Arm with Horseshoe Basin around 10AM and skied 1000’ of prrrrr-fect corn. From there we made our way across Horseshoe Basin to Buckner. Some postholing was required on the upper SW Face as things began to warm, but with a team effort on trailbreaking we made it to the summit by 12:30 with energy to spare. I’ll never get tired of the summit views in this part of the world.

Skiing the SW Face was a blast. No gnar, no glaciers, no routefinding, no stability issues, just fun in the sun. I wouldn’t say it was full corn top to bottom, but close enough. After skiing the face we retraced our route back across Horseshoe Basin, Sahale Arm and Cascade Pass, enjoying more carefree turns amid spectacular scenery. Below Cascade Pass the good times came to an end and we fought through mush with a fresh coating of pollen until the snow ran out somewhere around Boston Basin trailhead. Well-earned beers were enjoyed back at the car. At 10K vert and 12.5 hours C2C, Buckner was my longest day of the season so far. The combination of good company, good weather, ski conditions and scenery made it one of the highlights of the season as well.

I’d be interested to hear from anyone who’s skied the N Face of Buckner – when did you go, did you approach via Boston-Sahale Col or Sharkfin Col, and what were conditions like getting onto Boston Glacier and back again?

Photos & video by Tim Gibson except where noted. 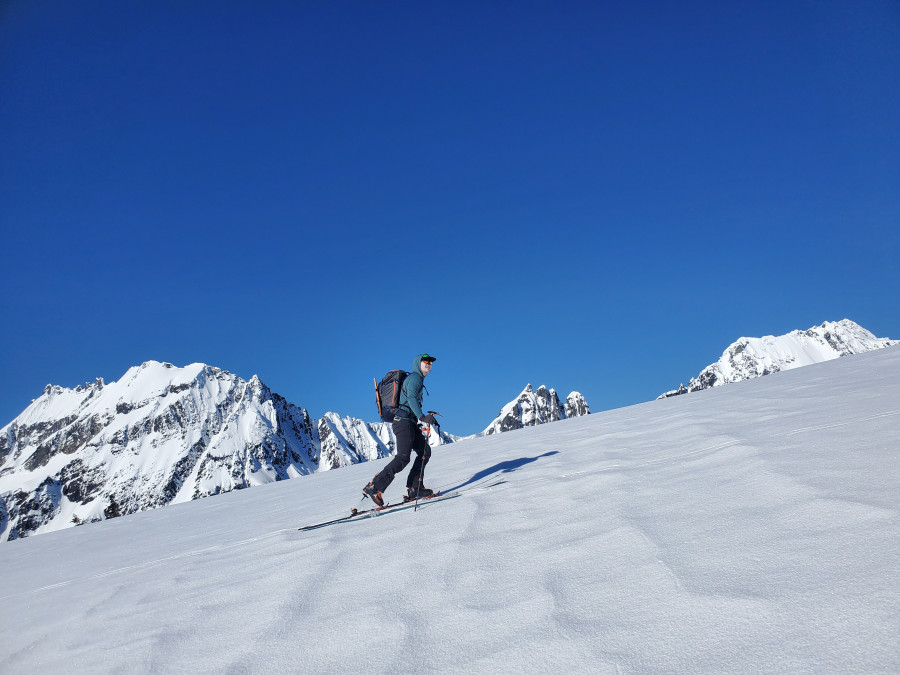 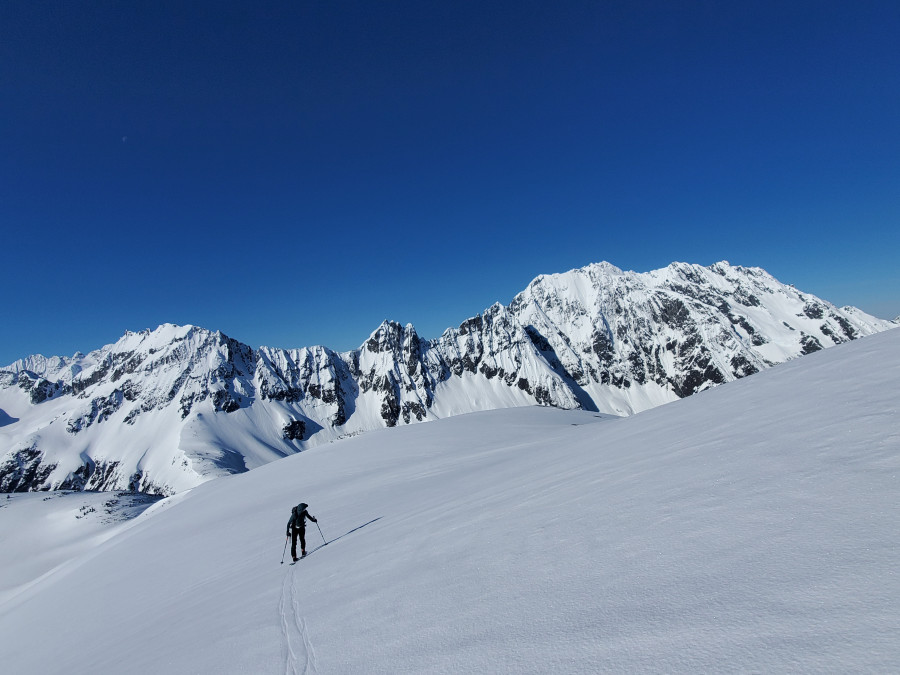 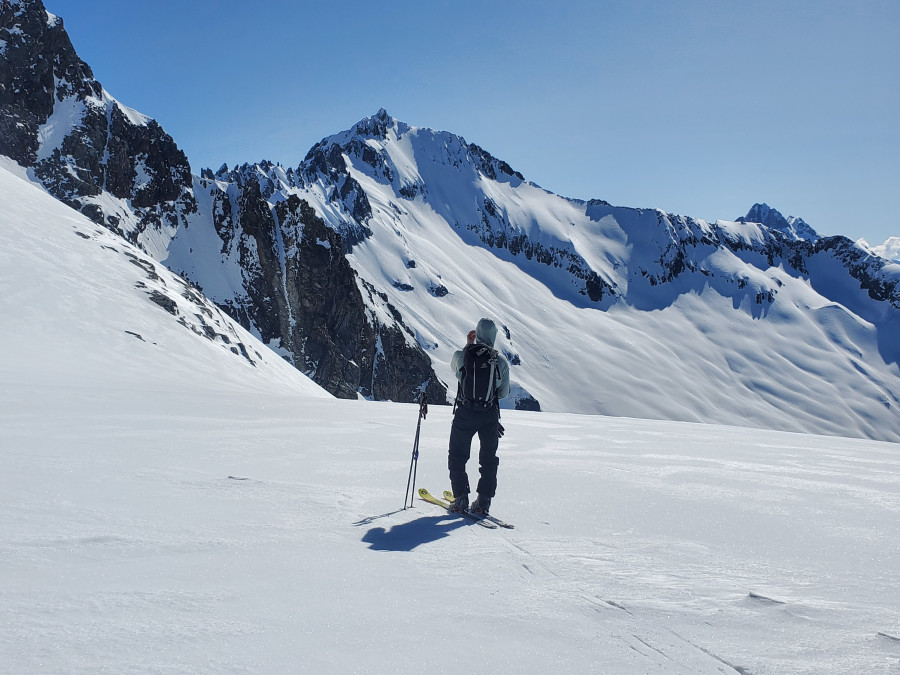 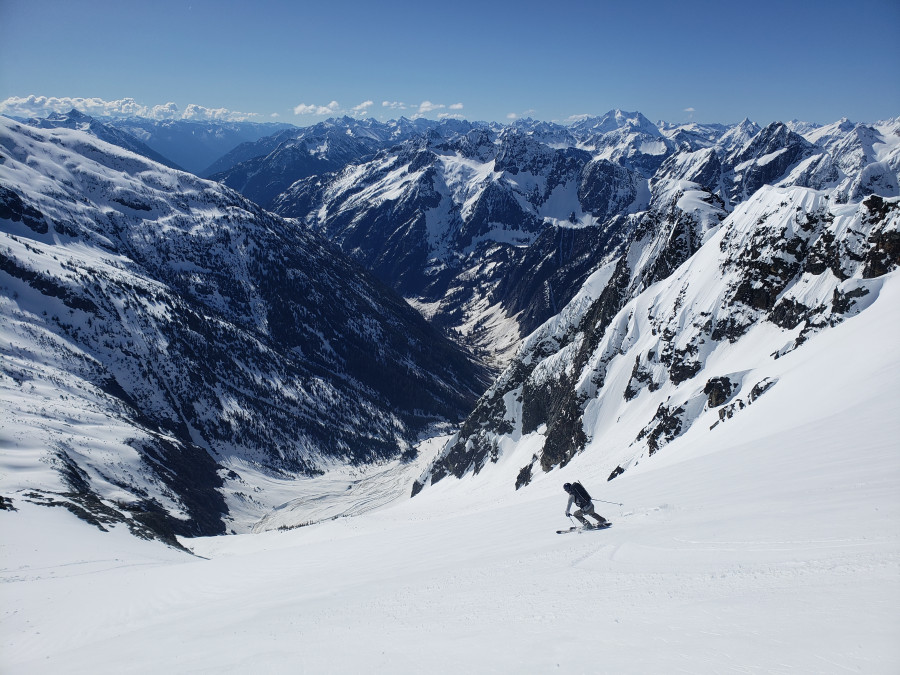 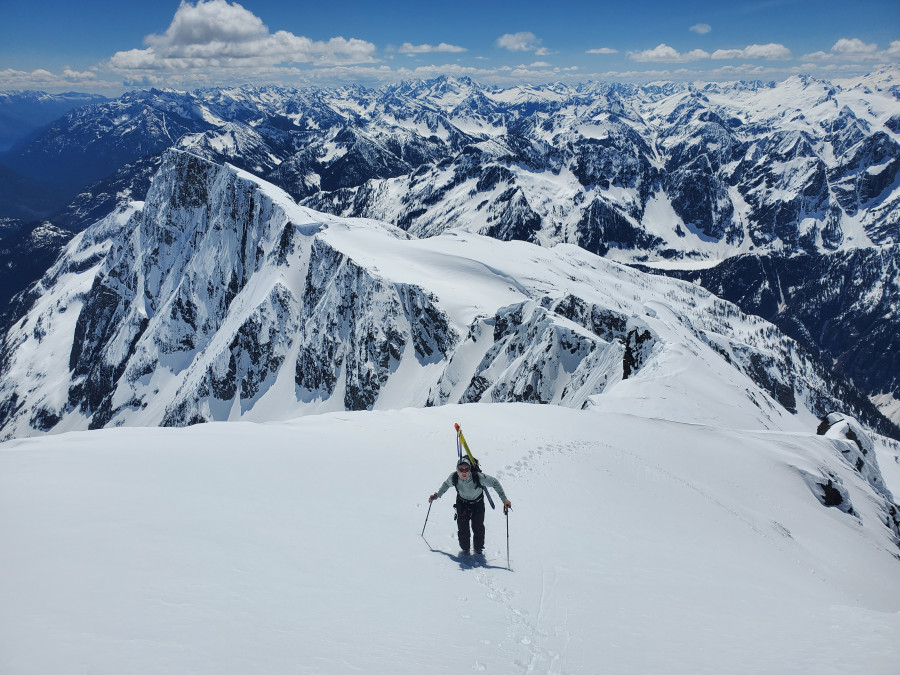 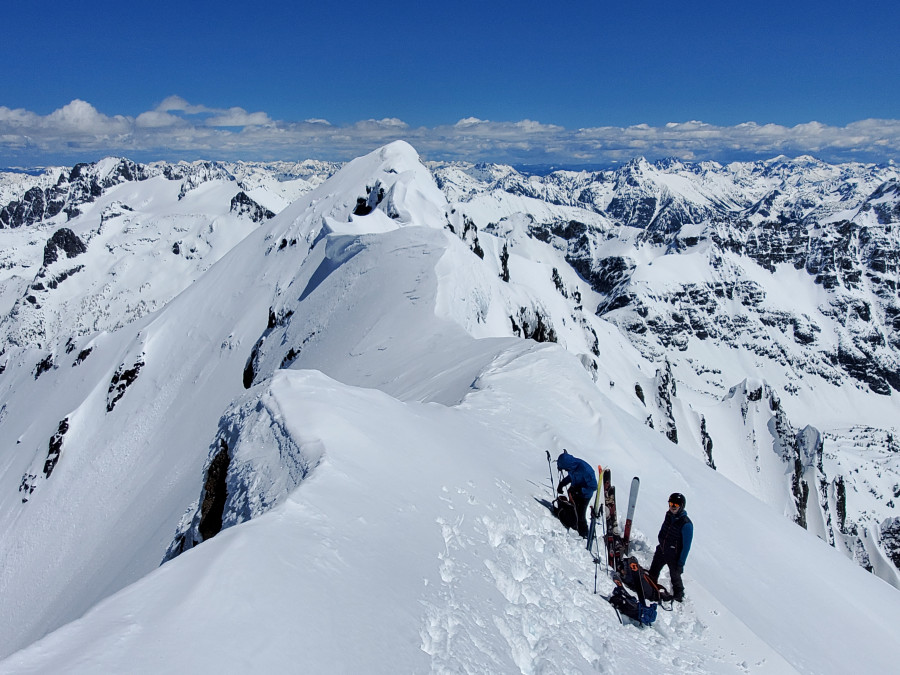 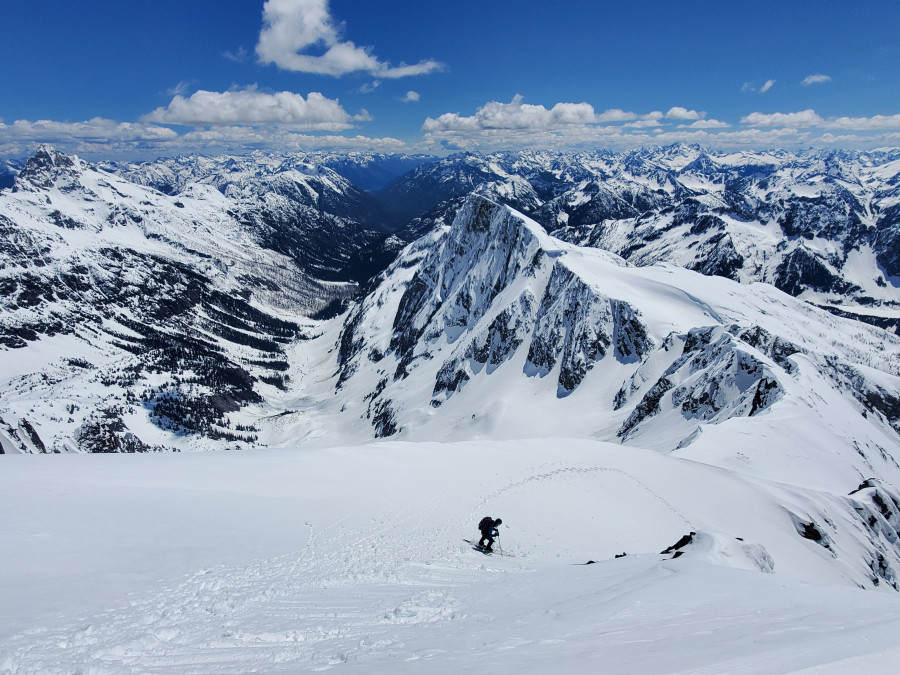 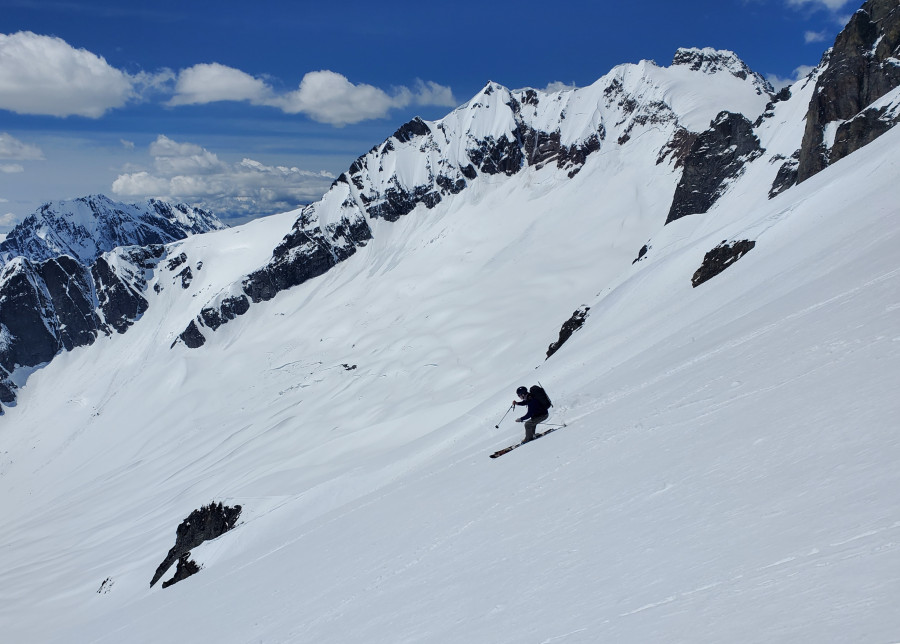 I'll send some info your way. The short version: we took a higher-than-standard --climber's right -- col/notch near Sharkfin to ski down to the Boston Gl. No rap required. It would have been possible to climb back out that way, but we carried on the Forbidden circuit after skiing N face Buckner. I'll try to find my June? tr...

Awesome! Was it easy to get into horseshoe basin? I always assumed there was some kinda shenanigans getting over there. I have a funny relationship with Buckner! Ive prolly been into the area to ski Buckner over 5 times and have yet to step foot on that mountain!! Maybe its time to give up on the north face and give the sw face a go, looks like a longer ski run anyways!

Do you think you could have just dropped into the N face from your position atop Buckner? In that case, approaching as you did makes sense, although it prevents you from scoping conditions on the gnarly line.

@hedonaut - thanks! Who doesn't love a good entrance exam?!

@ajscott - no shenanigans getting into Horseshoe Basin.

@kamtron - we could have easily dropped into the N Face from the summit, although that would mean reascending it afterwards, pushing the total vert for the day up to something like 12K.

Camping on Sahale arm or the Boston would make it more reasonable.

Wow, those views - couldn't agree more.  A sunny and clear day in the Sahale Arm area is just amazing. Congrats.

During the big snow year of 1999, Garth Ferber and I skied the SW Face of Buckner as a loop. At that time you could still drive to the Cascade Pass trailhead. We bivied at the Boston Basin trailhead and climbed over Sharkfin Col to the Boston Glacier. We climbed the N Face of Buckner and skied the SW flank, returning to the car via Cascade Pass. We were able to ski most of the way down the North Fork Cascade River basin to the road, rather than walking the trail. The trip was done on July 20, amazingly late in the year.

Not looking at TAY as much as usual so I'm late to this but I saw "Buckner" in the title and had to take a look. Nice TR, great pics and well done! I've skied Buckner from two different approaches. First time was in early June- I think, circa 2005 ish, and we approached and skied as you did. The second time was in late July, 2011. We climbed Sahale arm above the entrance into Horseshoe Basin and traversed the south face of Boston to get to Boston Glacier. Climbed and skied the north face of Buckner then re-climbed the north face and skied the SW side and returned via Sahale arm. TR here: https://cascadeclimbers.com/forum/topic/81698-tr-mt-buckner-trifecta-7242011/?tab=comments#comment-1022939