"The distraction of Whitehorse and its dramatic relief pose a serious hazard to skiers driving 50mph on the highway along the Stillaguamish River, and it is hard not to ask yourself what it would be like to ski the line." - Martin Volken

On Saturday, Eric Gold and I gave in to temptation and not only asked ourselves, but went to find out. Turns out, it's Type I fun (if you're a masochist like us).

We parked at the Niederprum-Whitehorse Mountain trailhead and set off at 7:41AM. There were about 5 other cars already there. Following Volken's advice and a GPX from a friend who went last year, we walked straight down the wide road (not the Niederprum trail) until we reached the creek for our first shenanigans. We stayed climber's right the whole time, traversing through some slide alder, a V1 boulder problem, and lots of concentrated rock hopping.

Just over an hour into our journey, we reached the capital S schwacking portion. All the beta we'd read was right: there are 3 distinct phases, the first being dense shrubbery, the second involving outright closing your eyes and swimming, and the third intimate encounters with slide alder and devil's club. There are short 100-200ft sections between the schwack pitches where the branches clear and you have room to breathe and move freely.

At some point, we found fresh muddy footprints and followed those to the snow line, transitioned to ski boots (If you love yourself, you'll bring dry, extra socks and change here. I didn't do that.) We followed the tracks that changed to a bootpack, postholes, and eventually, a skin track. Thanks to Stephen and Anthony for putting those in!

It was around 11am at this point, and the sun came out. Snow melted off the cliffs far from us, triggering sloppy D1 wet looses. We worked our way across the Sill Basin toward the So-Bahli-Alhi Glacier, hoping the encroaching clouds would hang out for a while. They did.

Snow stability improved the higher we got, and we felt more confident about our decision to trek on. We upped our pace and skinned faster, making it to the summit block as the other party was ascending. The bootpack was deep so we opted not to put on crampons (a mistake), and decided to turn around 10ft from the summit, rather than pull some sketchy moves over ice or stop to put on crampons on a 50° slope. At this point, fog had rolled in so there were no views to be had, and skiing from the summit (our original plan) would have been tricky with the limited viz.

We descended our bootpack, clicked into our skis, and had some amazing turns on the steep section at the top of the So-Bahli-Alhi Glacier. The quicker we descended, the quicker the snow turned to sludge. We followed our skintrack to give distance to the large holes and crevasses we'd passed on the way up. (There aren't that many to warrant roping up, but hard to see over rollovers skiing down.)

The schwack was both easier and harder on the way down. Easier to stomp down slide alder, but harder to feel the slippery branches when your feet are frozen and wet (bring extra socks). We got back to the car just as the last light of the sky dimmed, and a chorus of frogs cheered us on.

All in all, it was an adventure for the books, and one I wouldn't mind repeating next year. My arms need a little bit of time to heal from the scratches and thorns. 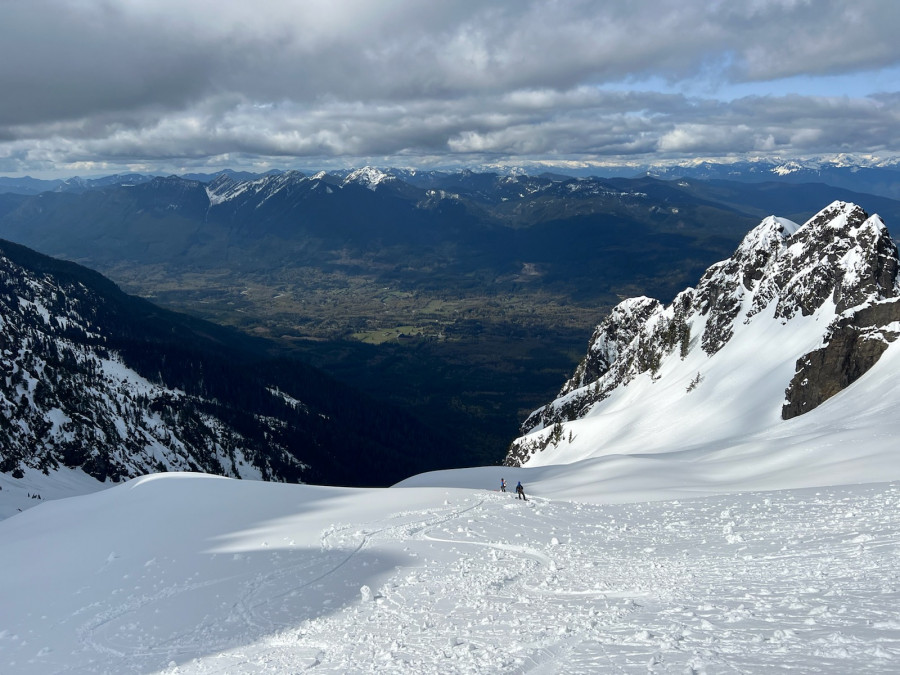 near the top of the So-Bahli-Alhi glacier

Densest part of the schwack

Badass. Good on you.

Thanks for the report and sharing info.

Awesome! Wish I could see all the photos, a few aren't working for me.

I'm going to get in touch next year, this is still on my list...

Excellent. I've only managed this peak once in my first go. It was an adventure and a fav if and when you forget about the approach! Ha. At least it is short and direct. I remember the avalanche debris at the base of the glacier being truly epic.