Wow, what an epic journey!

The goal, a two day Dakobed mission. We were warned this is a lot of sneaker time. We "packed light" for an overnight mission or so we had hoped. My pack was 30lbs without my skis... adding my skis and boots took me over 40lbs. Honestly that's a crazy amount of weight. I would never hike with that much weight. Who needs a tent and a stove!

When we got to White Pass we decided to drop our gear and set up camp. We foolishly thought the rest of the approach would be an easy 4,500ft. We talked a lot of trash that night about how smart we were, how we would be able to round trip from White Pass to the summit in 5 hours - 7 hours TOPS... we had no idea how wrong we were. But we were happy to have these packs off our backs.

All that trash talking we did the night before definitely came back to bite us. We had said, on 4,500ft of ascent? We can do that in three hours and get back to down in another two. We did look a little bit at the map and say, but it is 7+ miles each way, that will slow us down a little. But oooooh no... we still decided to shove off at 7:30am. We punked ourselves. we have no one to blame but ourselves.

Good news is, our packs were much lighter.

Almost the entire climb was in a whiteout. But the forecast said sunny, so we kept hoping the mild wind was blowing away the clouds. We ran into people returning from their failed summit attempts saying the wind was howling and they couldn't see a thing so they turned around.

When we got to glacier gap, around 10:30am, a guided group was just returning to their tents. The guide told us things cleared up around 8k and it was sunny above that, and the snow was softening quickly, but he also described a summit block covered in rime ice. One of his clients said skiing this sounded fun, and the guide proceeded to tell him that it was really hard and dangerous and you have to ski at least 100 days a year to be able to ski volcanoes.... hmmm, ok?

We continue to climb into the whiteout, navigating off of mostly the GPS since we couldn't see any features of the mountain. We had a short 10min carry along a dry spot on the ridge then continuous skinning until the summit. The caterpillars of roped up climbers passed us going down and I bit my tongue to not ask them why they were roped up.

The clouds finally broke for a short moment around 8,500ft and we finally got a glimpse of Disappointment Peak which buoyed our spirits. But the clouds quickly returned and we continued to climb in a cloud. Things cleared again at 9000ft and stayed clear for us to get to within a couple hundred feet of the summit.

We saw some skiers and splitboarders descend from the summit just as the clouds rolled in again. We climbed the last couple hundred feet in a ping pong ball wondering if we would have visibility to ski down. On the final approach we heard tales of a solo female skier who sent it off the Cool Glacier headwall hooting and hollering the whole way down. We knew immediately it was Colin's friend Mal who we'd seen at the trailhead.

After a short break at the summit, the skies cleared and we were able to ski from the top with quality visibility down to the rock rib onto Cool glacier. Then the whiteout hit again and we skied by braille until we could drop down the pass around Disappointment Peak. From here on down we had clear skies and could actually see the surrounding terrain.

As we skied past Glacier Gap onto the upper portion of the White Chuck Glacier we saw three skiers climbing up the face of the point at 7829ft, we knew it had to be Kyle, Todd, and Mal, so we paused and watched them ski sick turns as we cheered them on. After a short chat we continued on back to camp.

Skinning the bulk of the rest of the way, when we got to just below the ridge line before the traverse, we split up. Lukasz decided to return on the trail, but Colin and I skied back down into the valley and skinned up the winter route. This was a MUCH better line for the return trip as we were able to ski almost the entire way back to camp.

The round trip to White Pass took us a little over 12 hours. We were schooled. But it was a great day in the mountains!

Lukasz was trashed, he decided to stay another night and hike out in the morning. In retrospect, I think he made the right call, no way he would have made it back to the cars that night.

The deproach was a slog... but the thought of the car and a congratulatory beer at the end kept Colin and me going. We got back to our cars at 2am, cheered our accomplishment and crashed in our cars until the morning drives back to civilization. 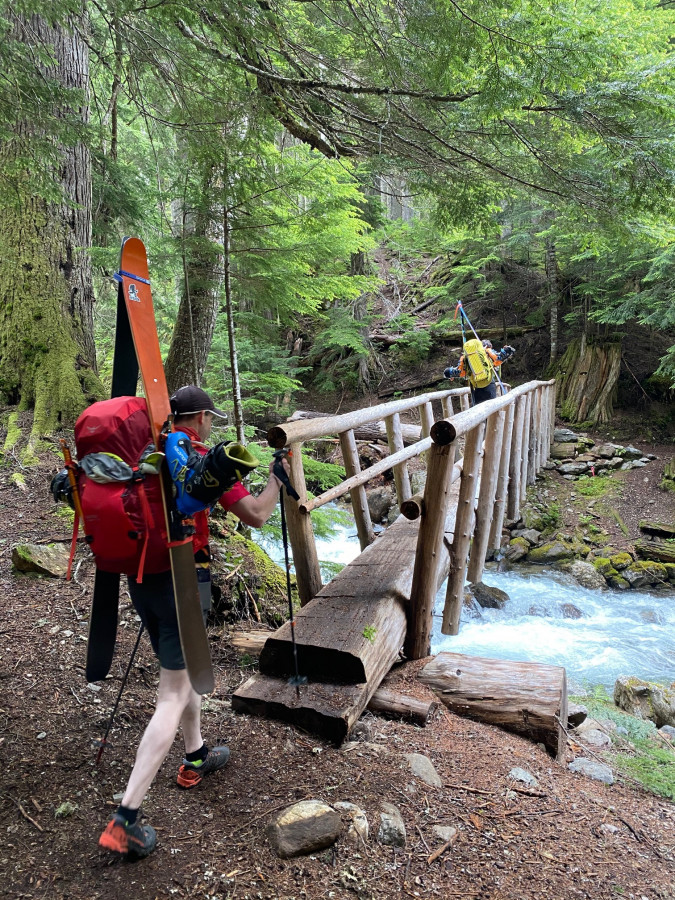 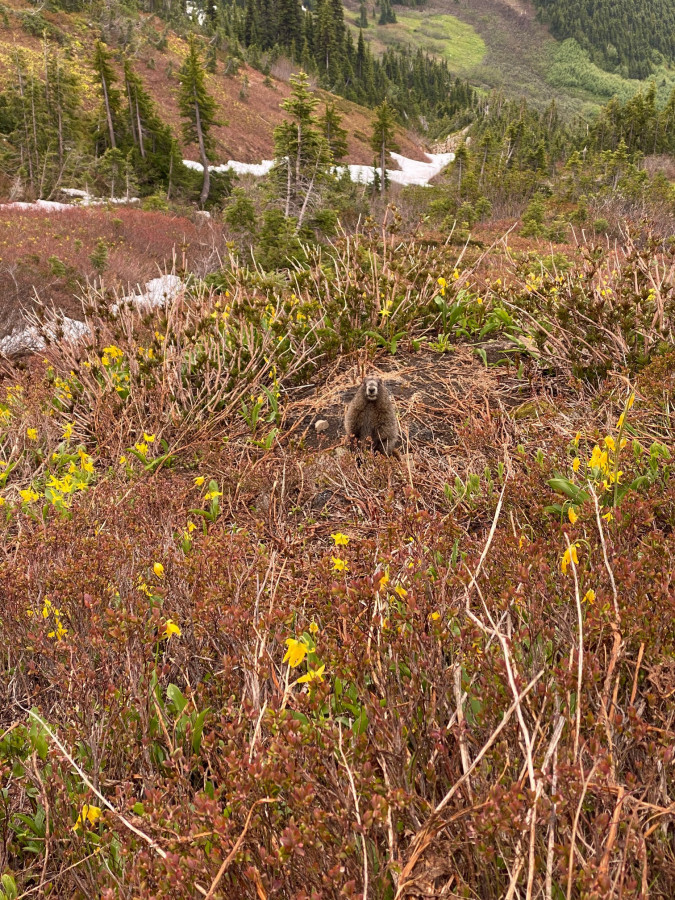 This whistle pig had absolutely no fucks to give about the people marching past his marmot hole. 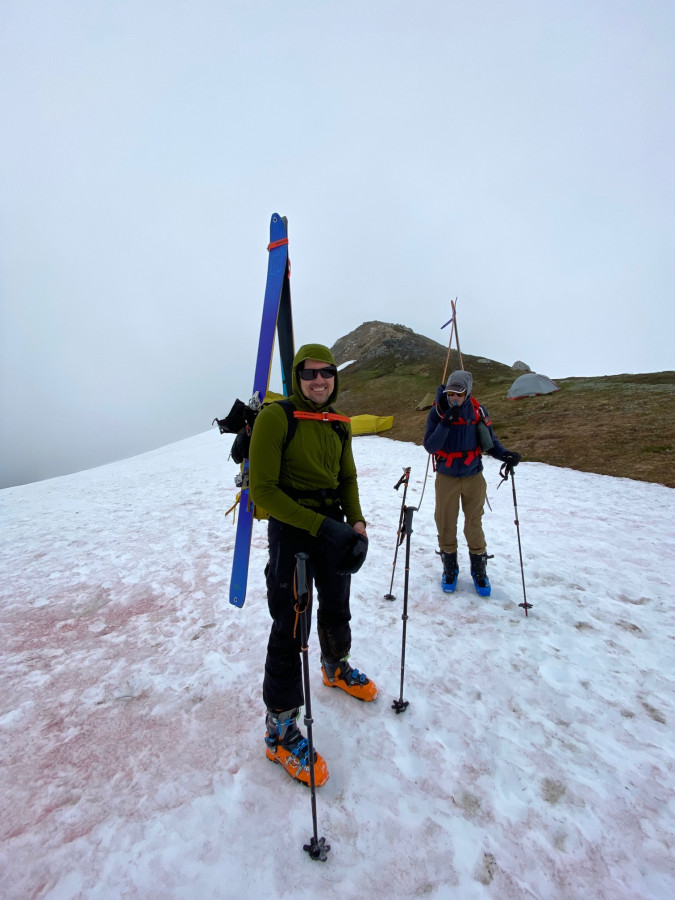 Lukasz has the worst luck with straps of all kinds. He lost his sternum strap for his pack, fortunately he brought more than one ski strap on this trip. 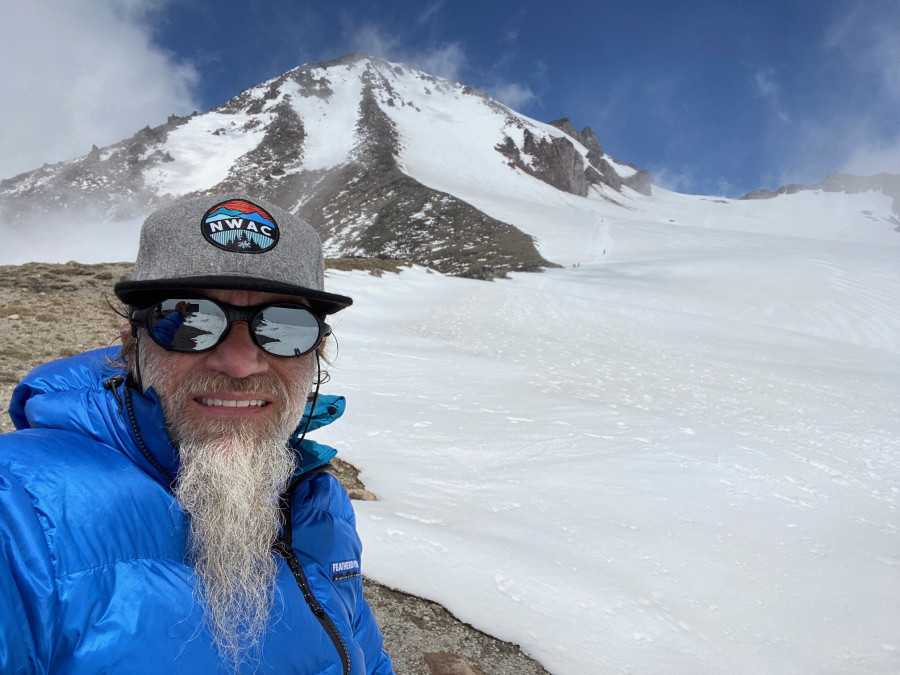 The skies cleared at 8,500ft just long enough for me to snap this selfie. 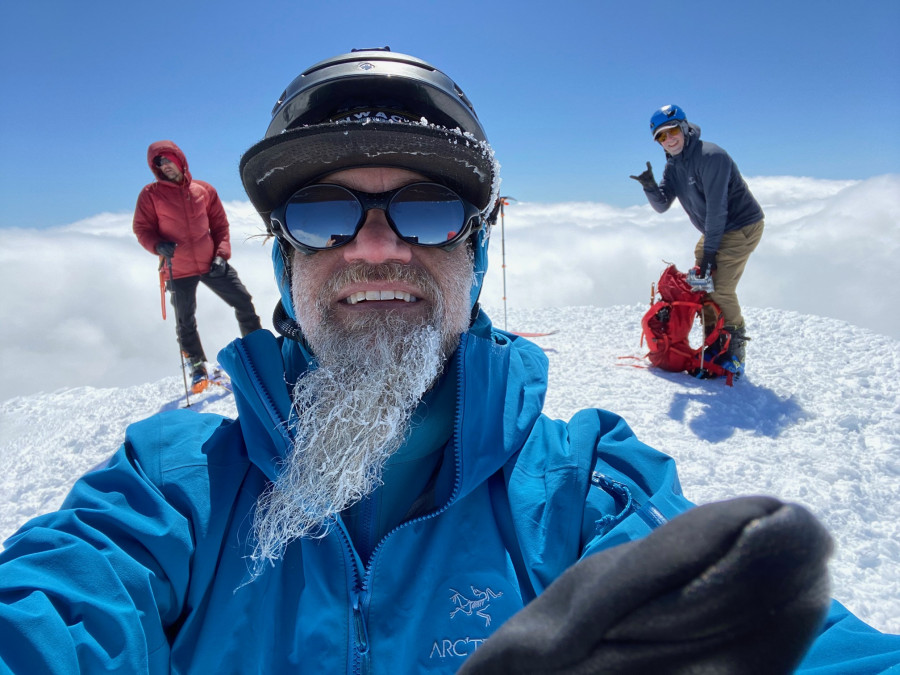 After summiting in a ping pong ball, the skies cleared long enough for a summit photo and a quick ski down to the Cool Glacier before the whiteout came back.

Lukasz was on the struggle bus most of the day. 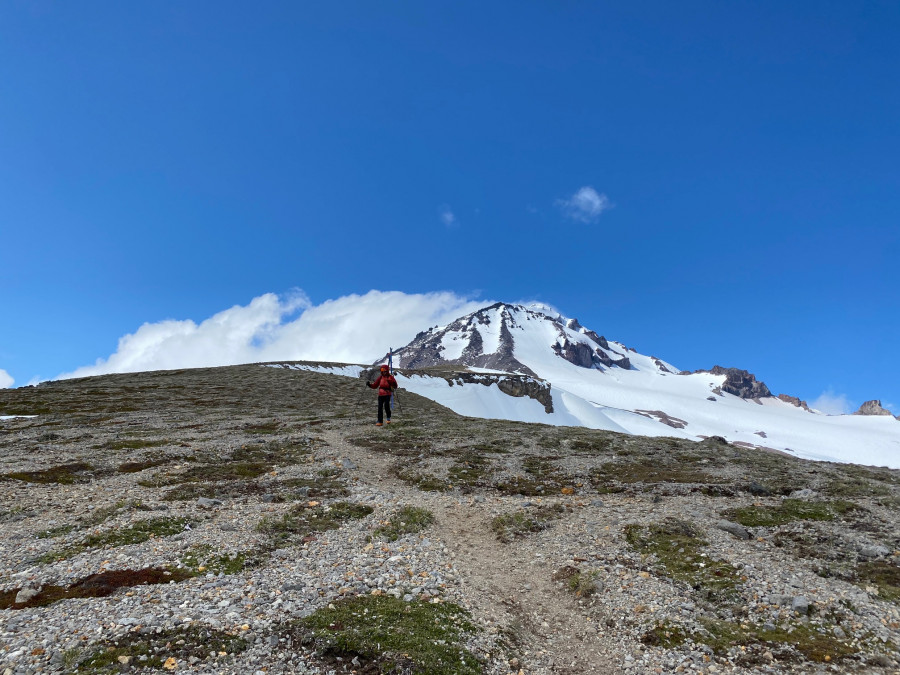 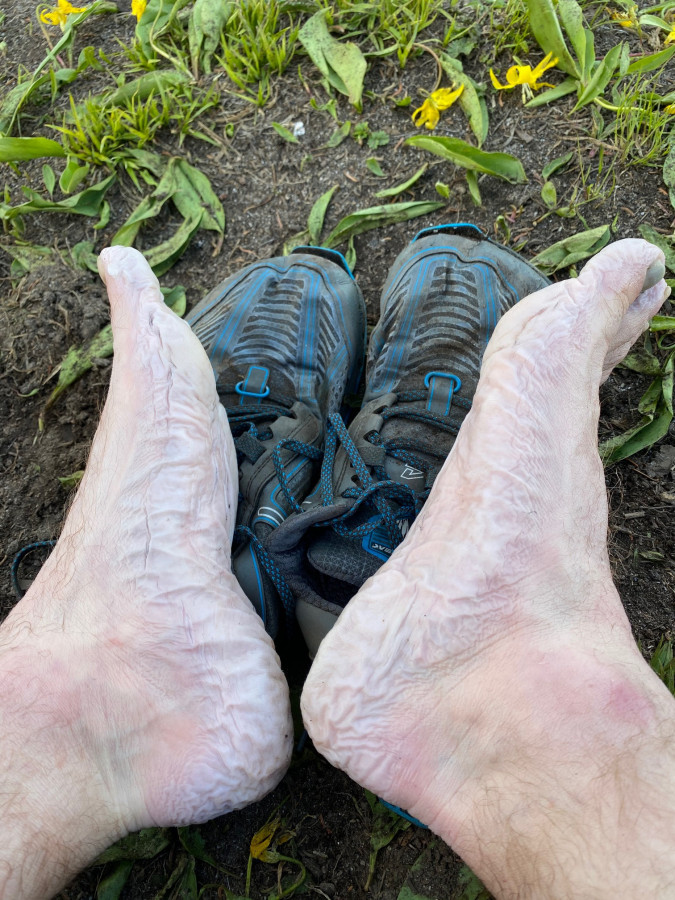 My feet sweat like crazy. They were waterlogged after 12 hours in boots. But good news, no blisters.

Hiking out by moonlight. 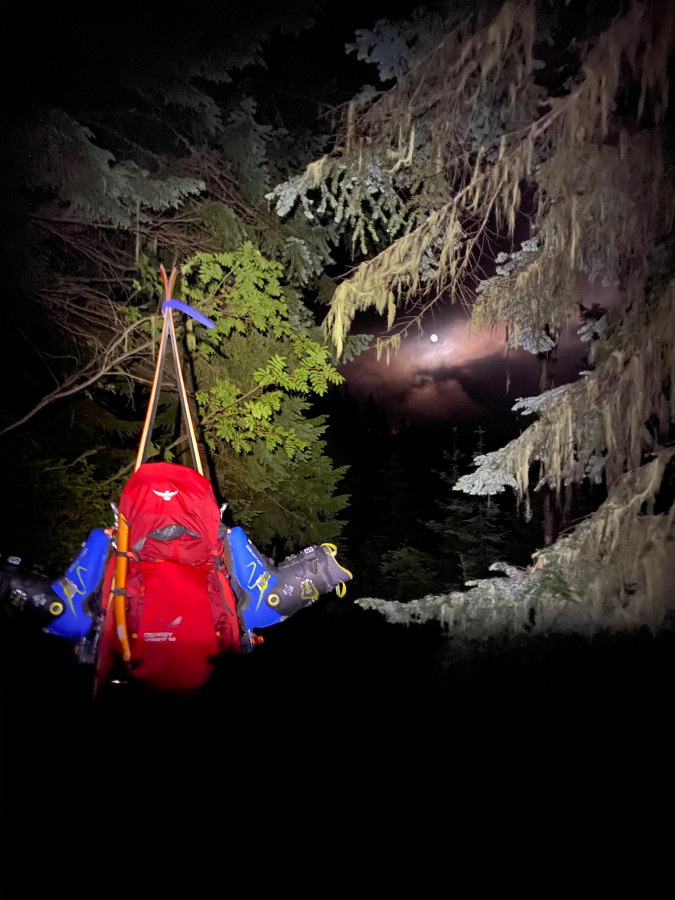