Day two of the two volcanoes in two days adventure. Lukasz joined Colin and I at Mt. Hood Thursday night, and we camped out dispersed camping style below the lodge.

We set off at 5:30a from Timberline, and made great progress up to the football field below Hogs Back. Ski crampons definitely made this easier. Transitioned to boot crampons and headed up to the Pearly Gates route. Snow was firm, but good quality for booting securely up to the gates. Colin and I both stuck with our whippets instead of switching to ice axes for the climb.

Got to the summit in ~4.25 hours. We were expecting  "corn-o-clock" around 10am with the warm weather overnight. But as we made the traverse to the Old Chute we could see that the top was still quite icy, several groups were waiting it out, others were booting down the old chutes before transitioning to skis. We decided to wait it out. Spending about an hour at the summit.

We could see some snow boarders dropping in off the western rim and they were getting nice corn, and the climbers were reporting the snow softening up quite a bit, so the ten of us waiting to ski started transitioning.

I got my skis on pretty quickly and side slipped down a bit to get out of the way for others. As I worked my way down, the snow seemed to be in pretty good shape, and so after another couple minutes I decided to start descending, mostly staying higher above the fumarole.

This is where some drama occurred, which I will outline as what went right, what went wrong, and lessons learned.

First off, what I knew in preparation for how to safely descend out of the chutes: avoid the fumarole, don't fall, if you do fall you better be damned sure you can arrest, try to traverse over to be out not directly fall line above the fumarole. I spied my line, had my whippet ready, and started side slipping/traversing.

What went wrong, I was staying pretty high, and wanted to drop a little bit in elevation, and thought a turn would be doable with the softening snow. But alas, my turn landed me into harder snow, and I slipped.

I kept my head, I new I was still pretty high above the fumarole, but I was sliding and not in control. My whippet was in my downhill hand, and in order to really get it dug in I had to flip my body over, this resulted in my ski jamming into the snow and being ripped off my boot and leash completely ripped off.

As I slid I kept my cool, I knew I could arrest and I dug in and came to a stop. I slid about 180ft before arresting. After doing a quick body check in my mind, I knew nothing was twisted or broken, and my only concern was where the hell was my ski?

I looked up and saw my ski sticking straight up out of the snow about 50ft above me. phew! That's a relief! I called out to everyone watching that I was ok. I got my other ski off, and started climbing back up to my other ski. Another climber was close to my ski so she grabbed it and walked it down to me.

Apparently all the skiers who saw this made a couple of immediate adjustments to their plans: several locked their bindings, and they all grabbed their ice axes, and then they made a point of traversing far to the west of the bowl avoiding the icy patch I'd hit.

Colin skied down to me, and I got everything put back together and we traversed out and had great turns the rest of the way down the mountain.

Things I would have done differently:

All in all it was a great day, even with the drama.

Lukasz and several others climbing 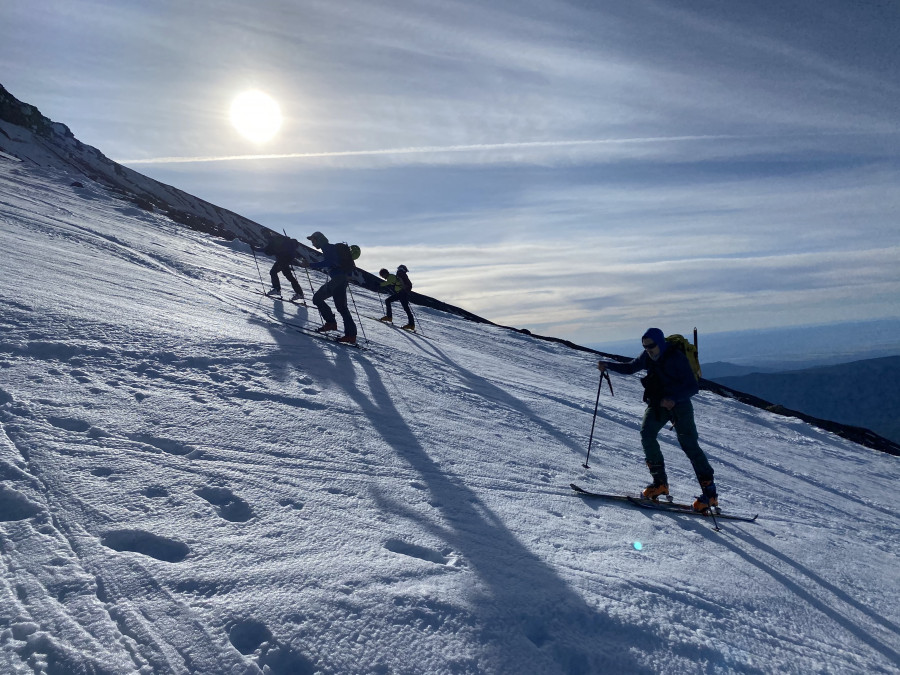 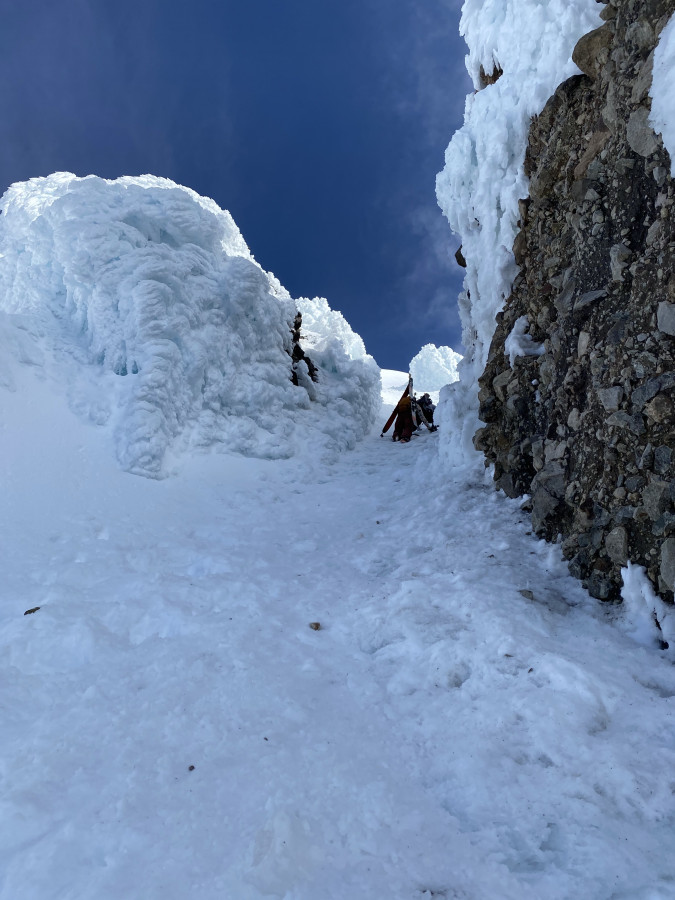 Skiers above us ascending the Pearly Gates without crampons. Not a choice I would have made. 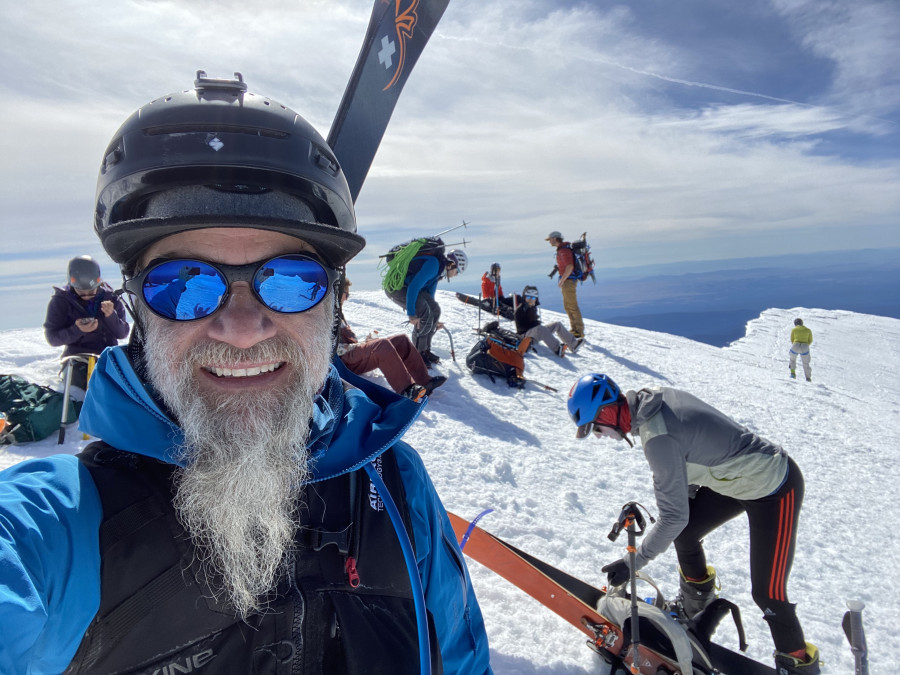 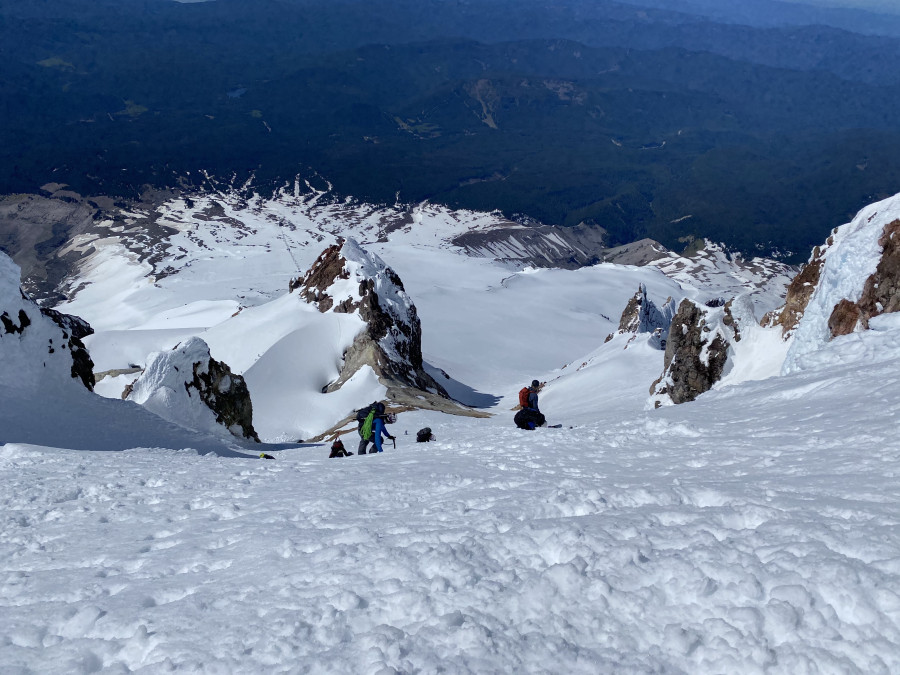 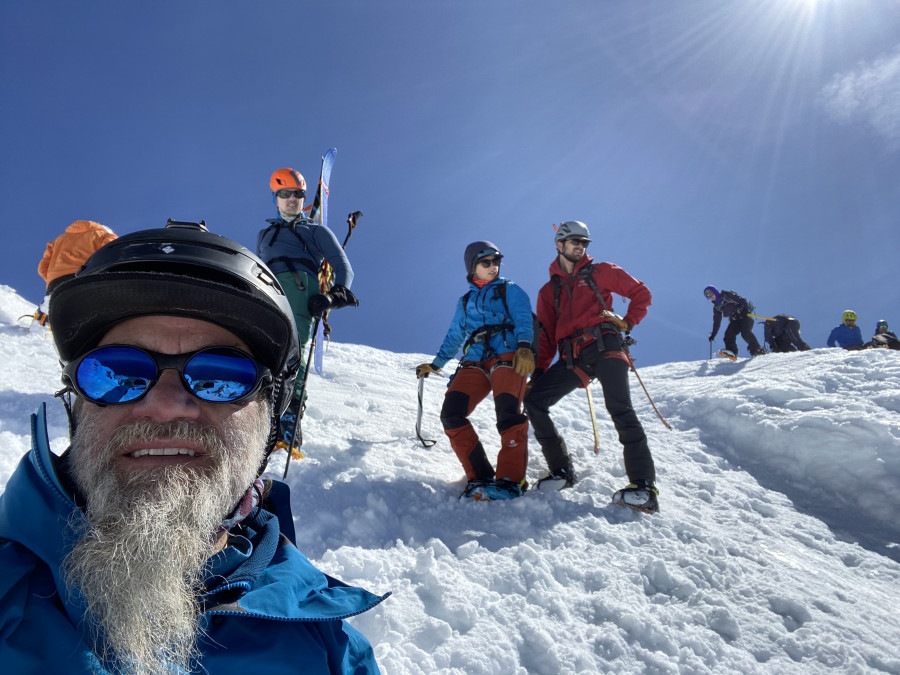 Skiing off the top of Hood is almost always interesting.  Glad you're all right.