Thursday to Saturday, Jtack and I had a very nice couple days skiing on both the Lyman side and the Spider side of Spider Gap. We were surprised by the crowds. I hope the extra trail use we've witnessed is a temporary Covid reaction. We met 7 people on Thursday, 28 on Friday, and 108 on Saturday. Bugs were fierce. Suncups on all aspects.

It has been hot in Wenatchee. Over a hundred for several days and up to 107! To avoid the direct sun, we left the cars (we drove separately) at 5pm and were in shadow almost immediately. We set up camp at the base of the Spider Glacier on a broad flat rock just above the waterfall. This has been my favorite camp spot for several years, but with the new crowds, it may be time to find something more remote. Although we met many interesting people, there were just too many milling around too much of the time. At one point, our camp was surrounded by 10 people from three different parties. The crowds caused a little bit of a Covid logistical problem on the trail too. There is some steep terrain between the meadow and the waterfall and on exit we had to stop and discuss with oncoming parties "OK how are we going to do this?" In fact, at one narrow intersection we were chatting with an oncoming party when another party approached from behind us, and another party approached behind the folks we were chatting with, and there was a four party Covid traffic jam! We spent Friday skiing on the Lyman side. Morning skiing was pretty rough, but when the snow softened, it was creamy dreamy! We had intended to ski the Lyman Glacier on Chiwawa but we decided it looked just a little to thin for us. It still could be skied from top to bottom, but there is a shrund crossing that looks scary and the snow through the steep exposed glacier ice is pretty narrow. 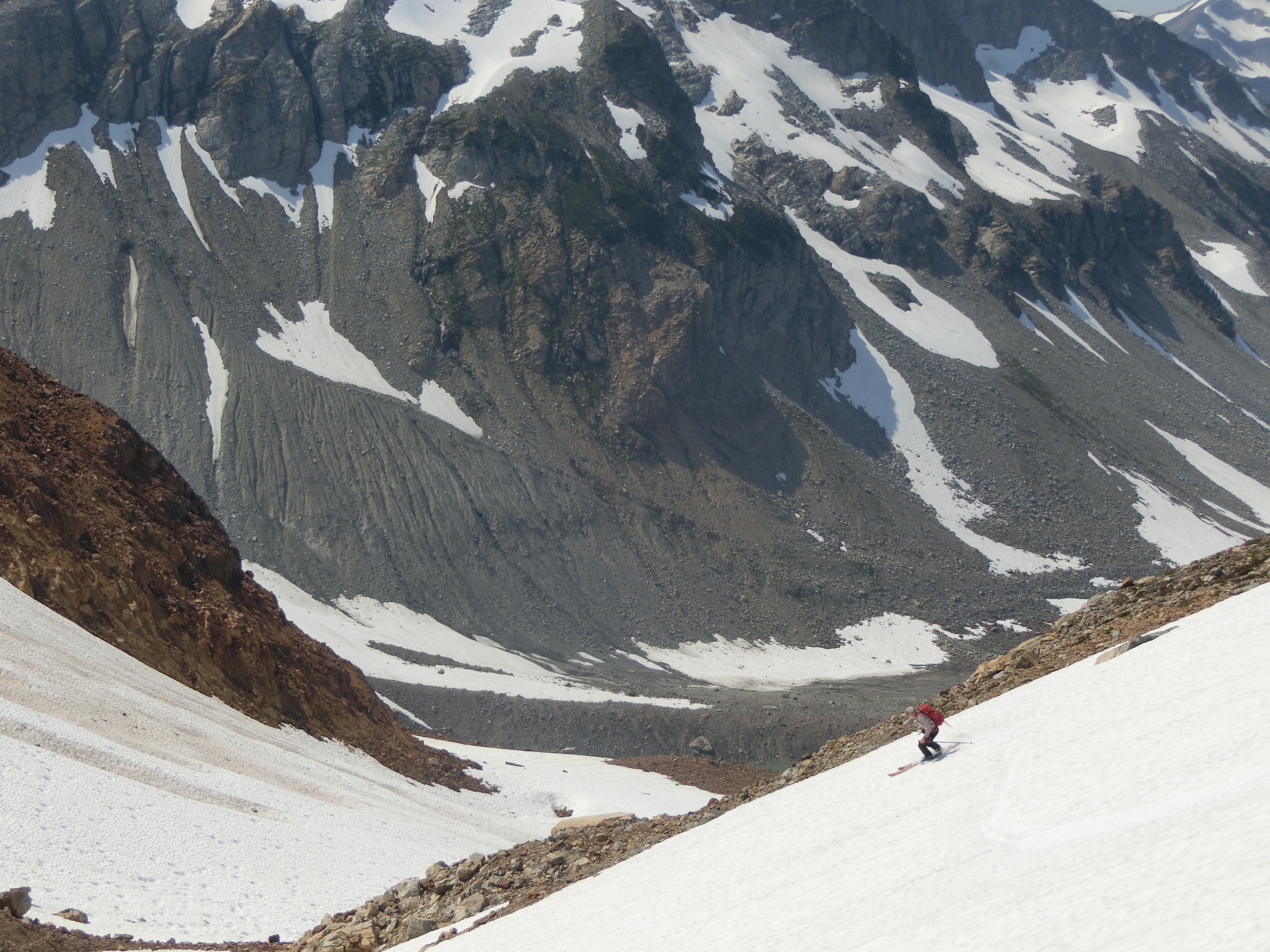 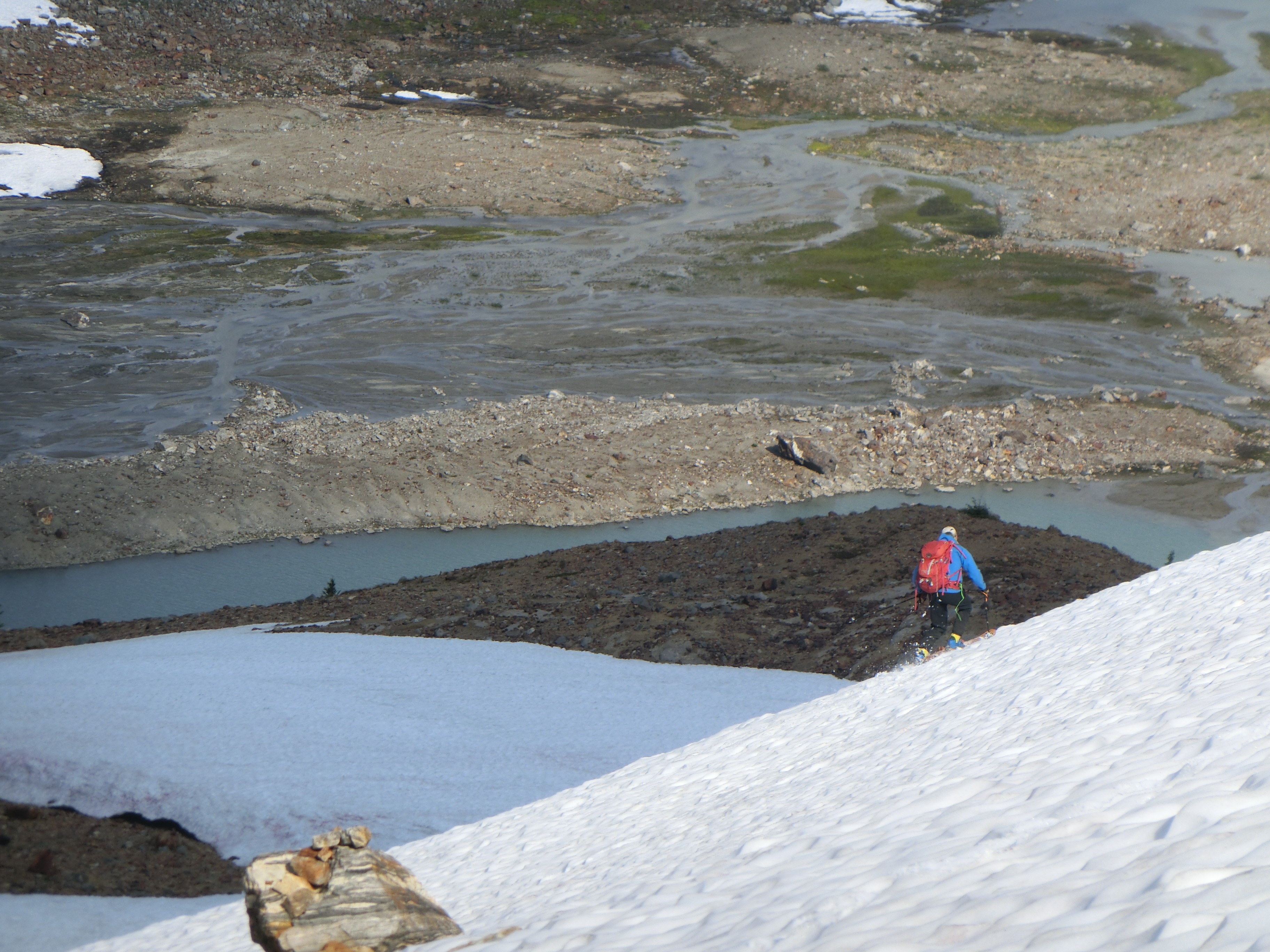 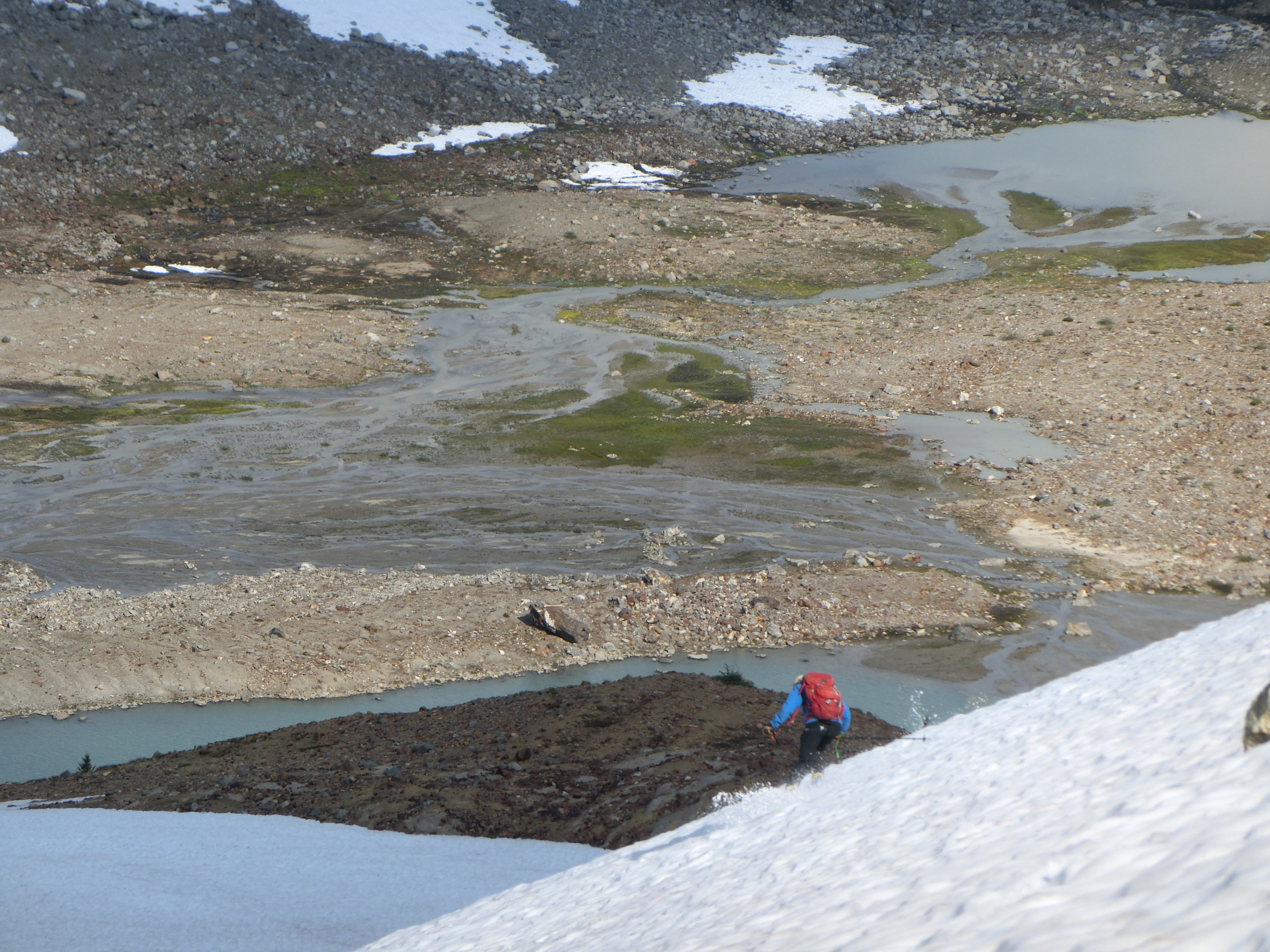 We visited Spider Gap several times from both sides. Not typical of our travel patterns, we sat up there each time enjoying the warm weather, snacking, watching the view, and chatting with passers by. Almost everyone we met was hiking the Buck/Spider loop. It was really great to just hang out up there multiple times.

Here is one group we met. Two REI adventure guides and a nephew on his first ever backpacking trip! They were (of course) doing the Buck/Spider loop. This view is one of my favorites from Spider Gap. Sitting Bull is the mountain on the left. Someday I want to ski from that saddle! 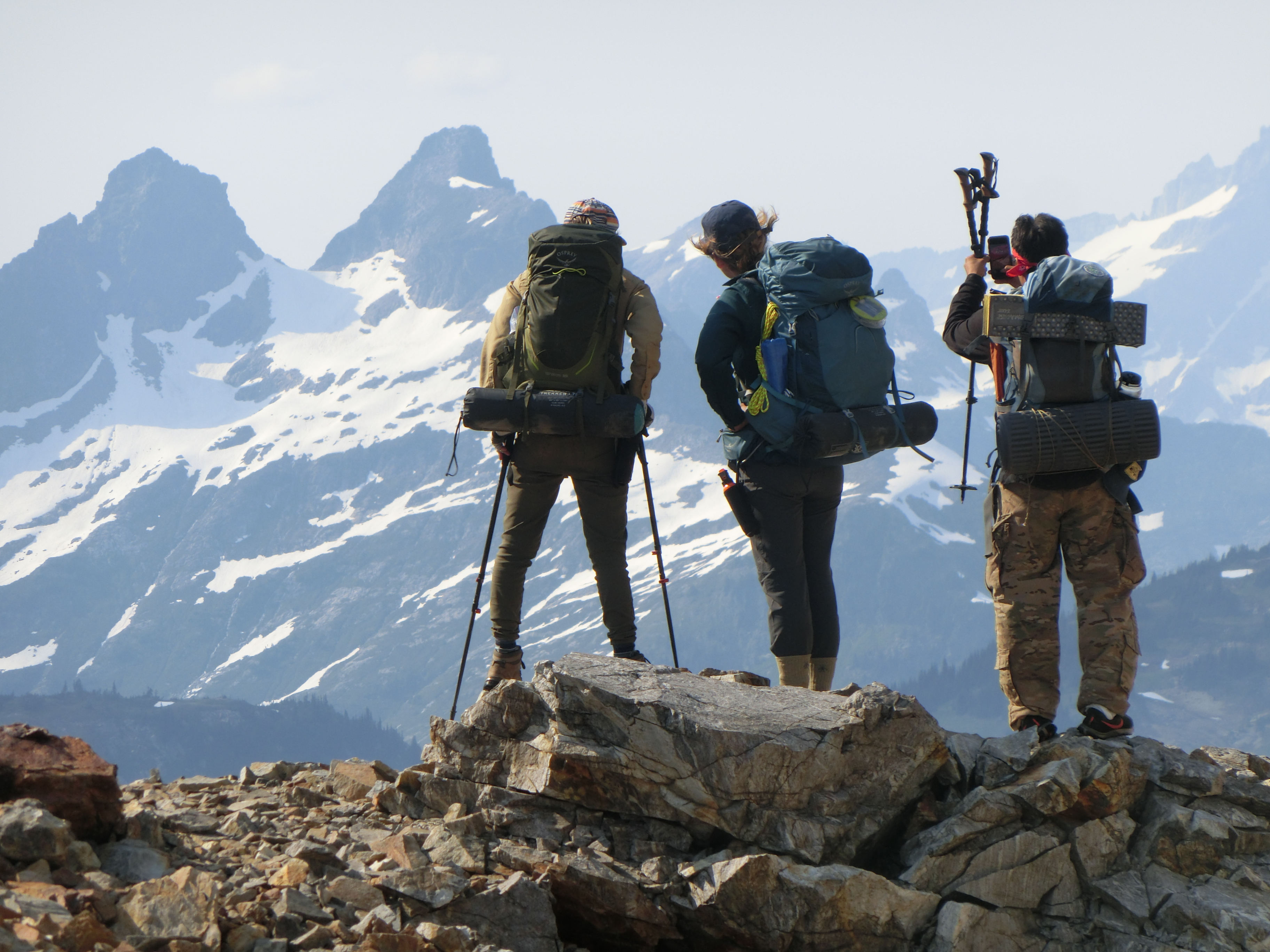 Another interesting pair we met was two guys also hiking the Buck/Spider loop, one guy with a tiny dog who was carrying a 17L running vest style pack, and the other with an overstuffed 80L pack so full he had to strap more stuff on the outside.

This is a three day pack! 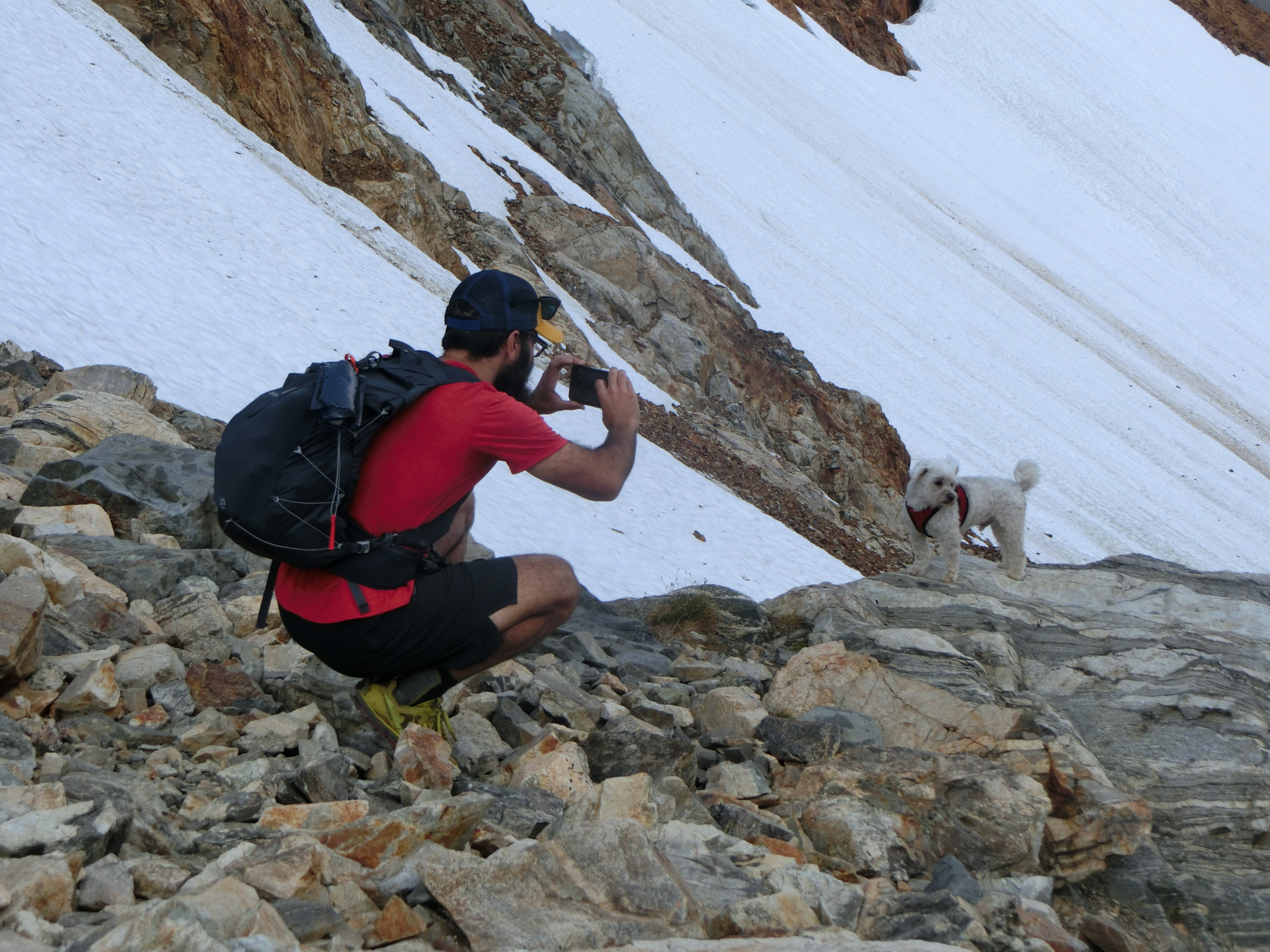 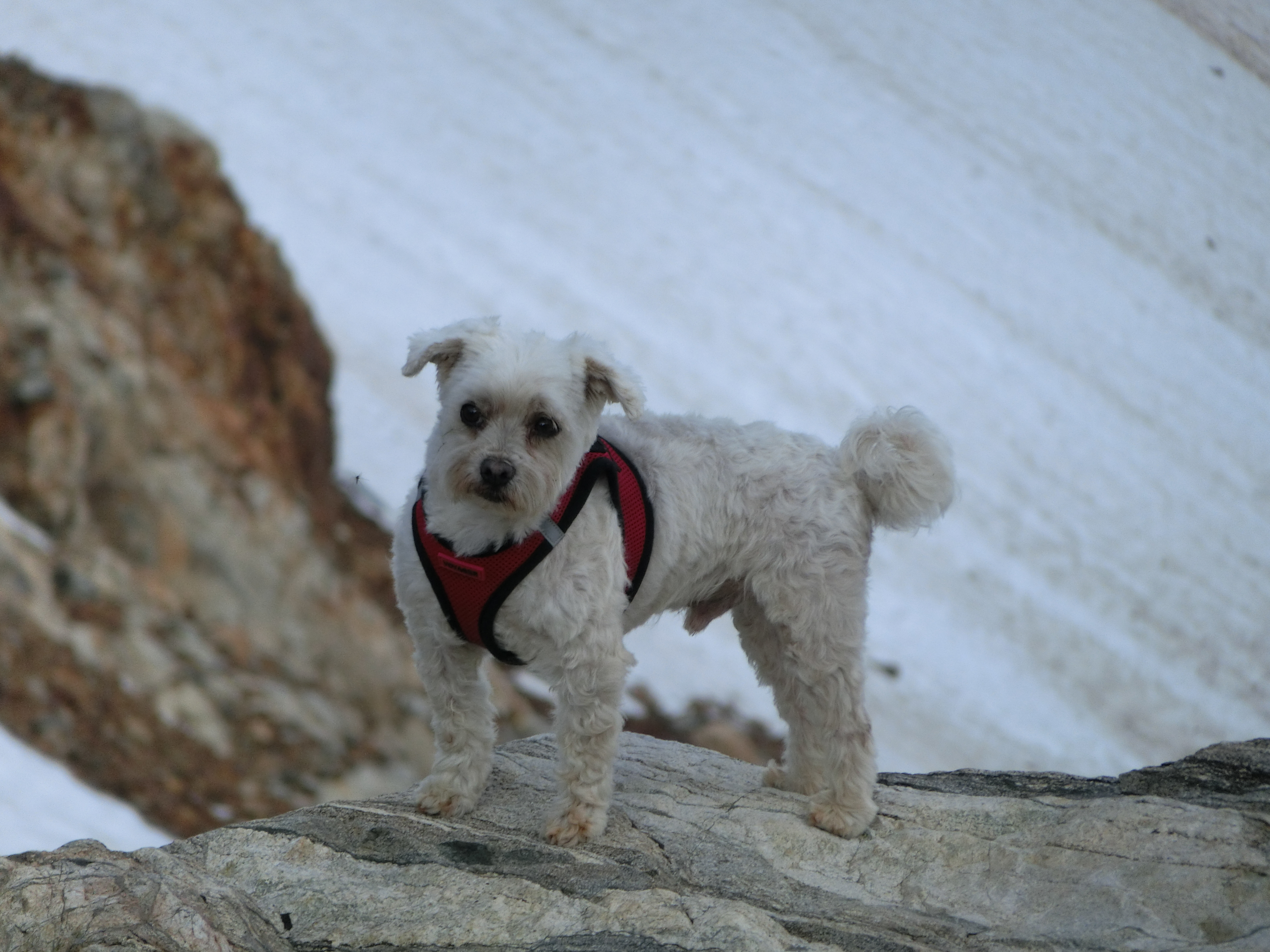 What really put these guys in my permanent memory was this Wim Hof action we witnessed a little later: 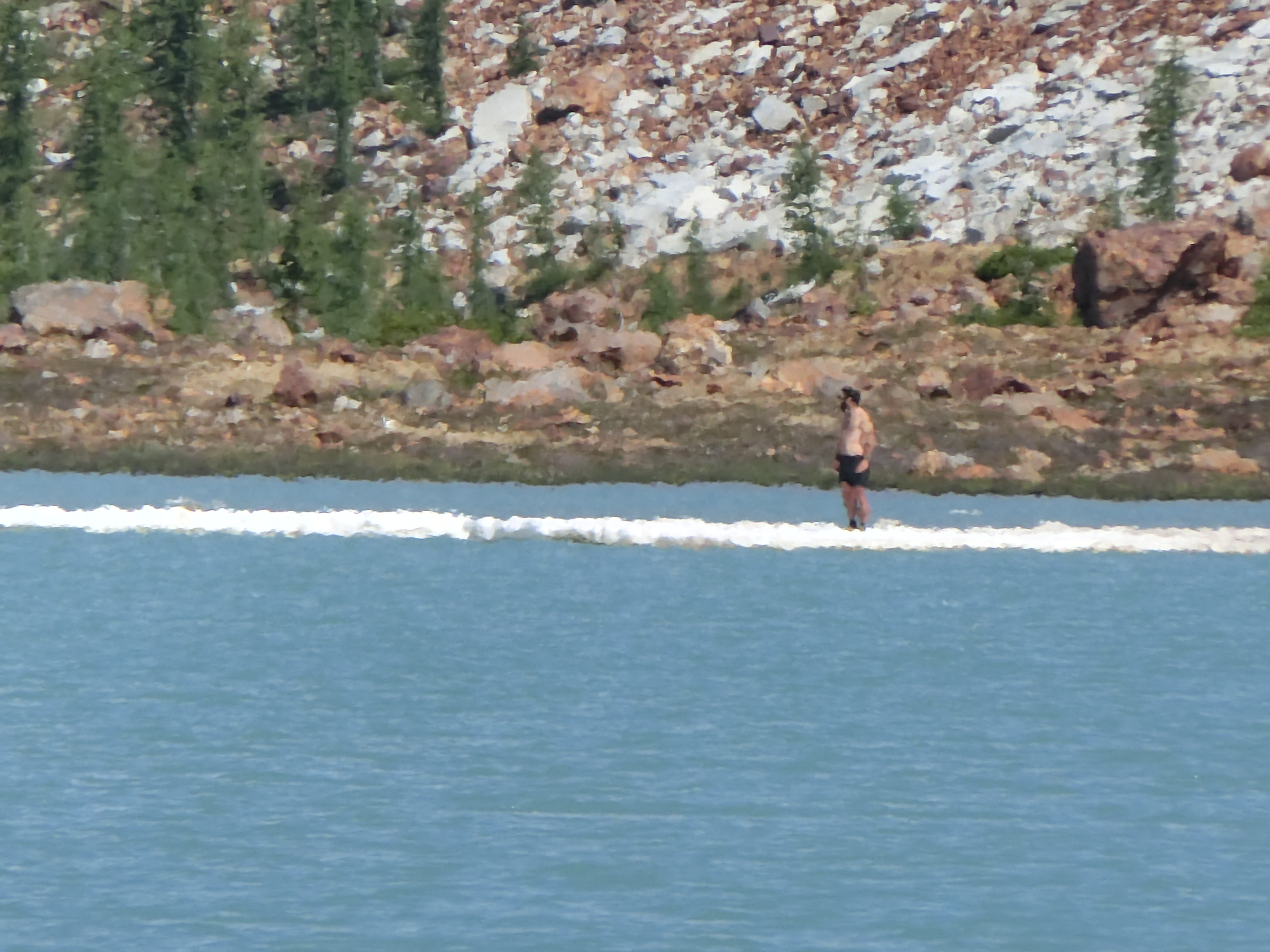 He's on an iceberg in the uppermost of the upper Lyman Lakes.

We skied back to camp as the evening shadows were just crossing the Spider Glacier and the snow was soft enough to make the larger south side suncups almost ignorable. 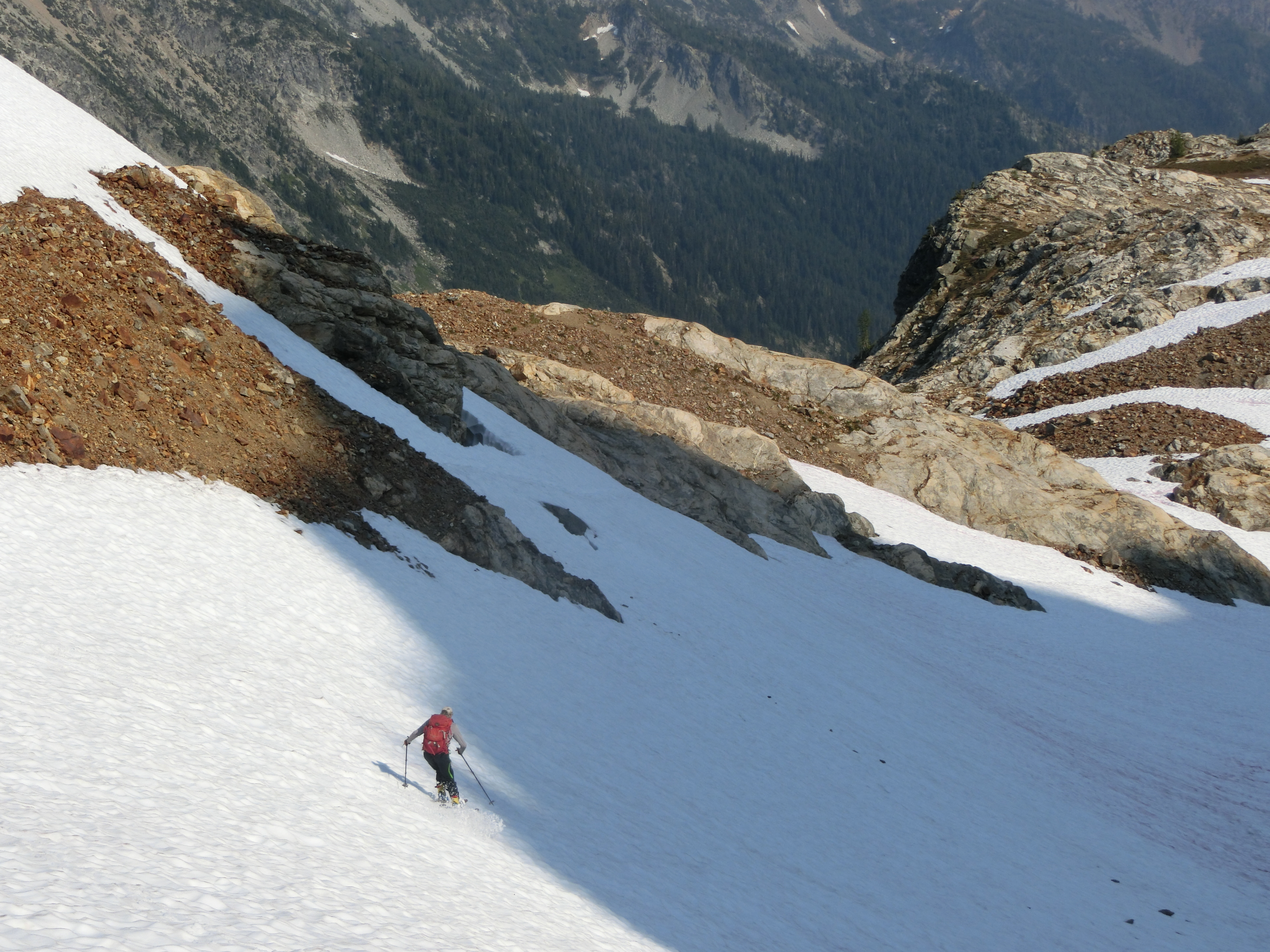 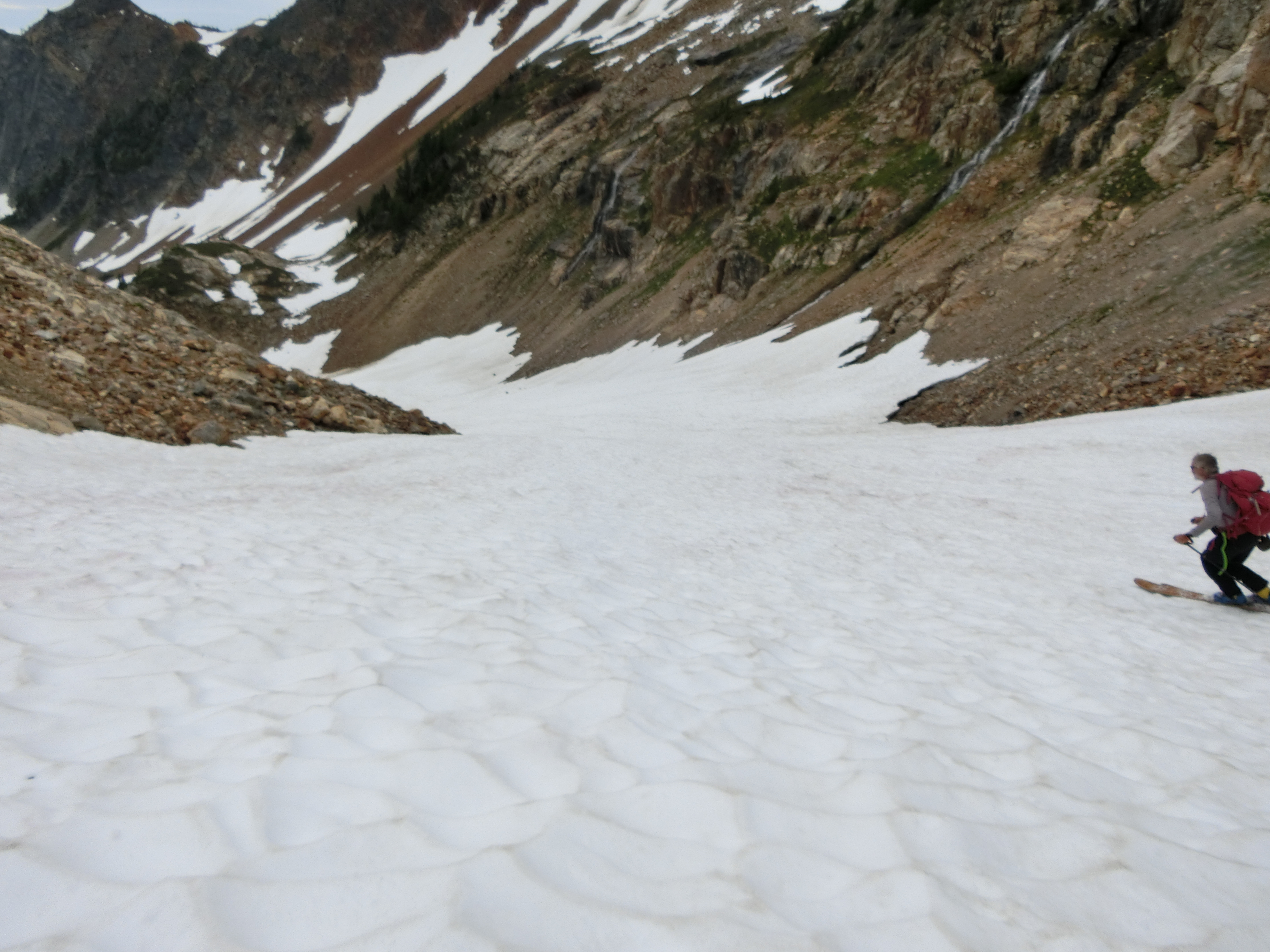 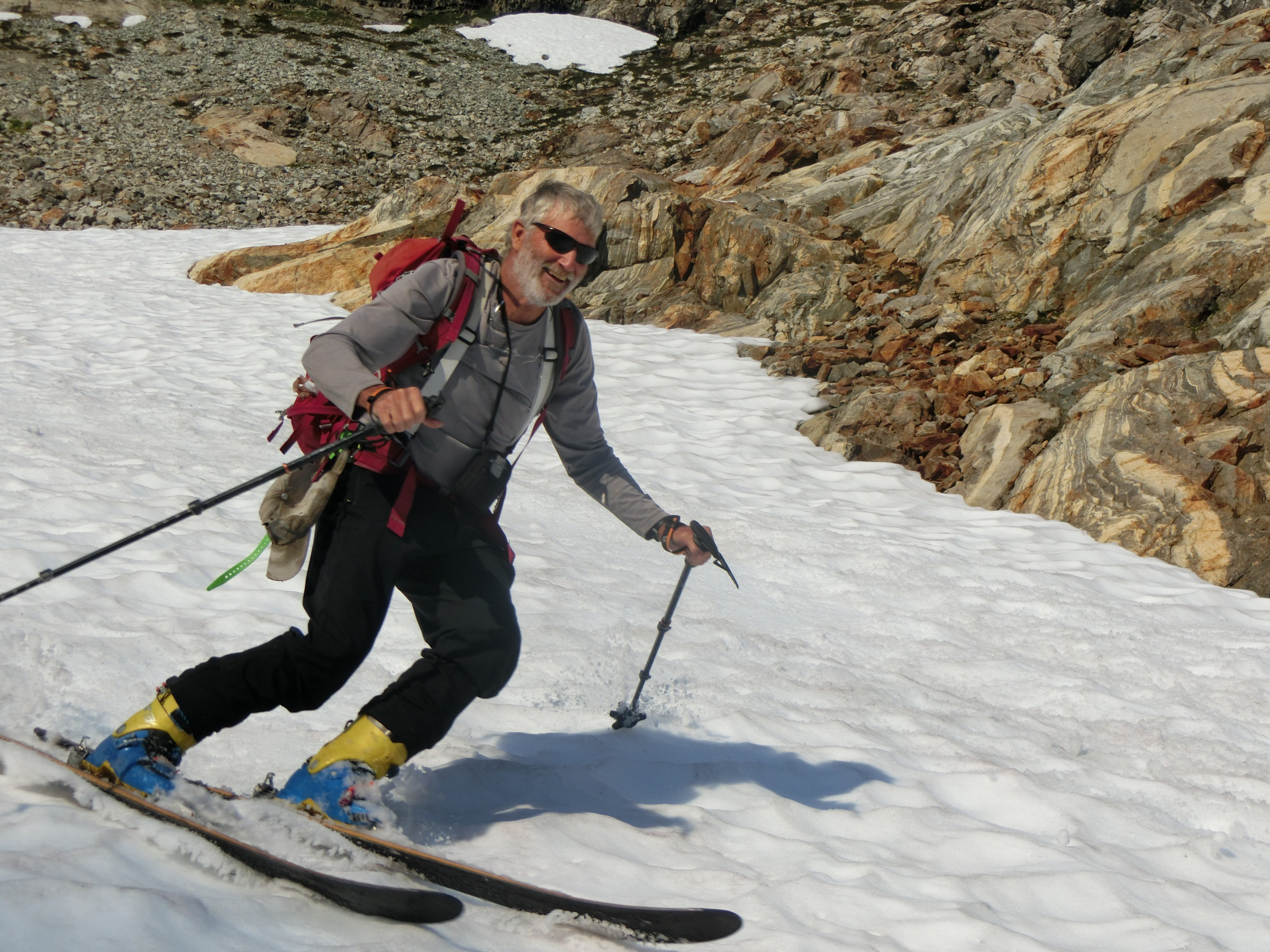 The flowers are out and the marmots and pikas are living easy. 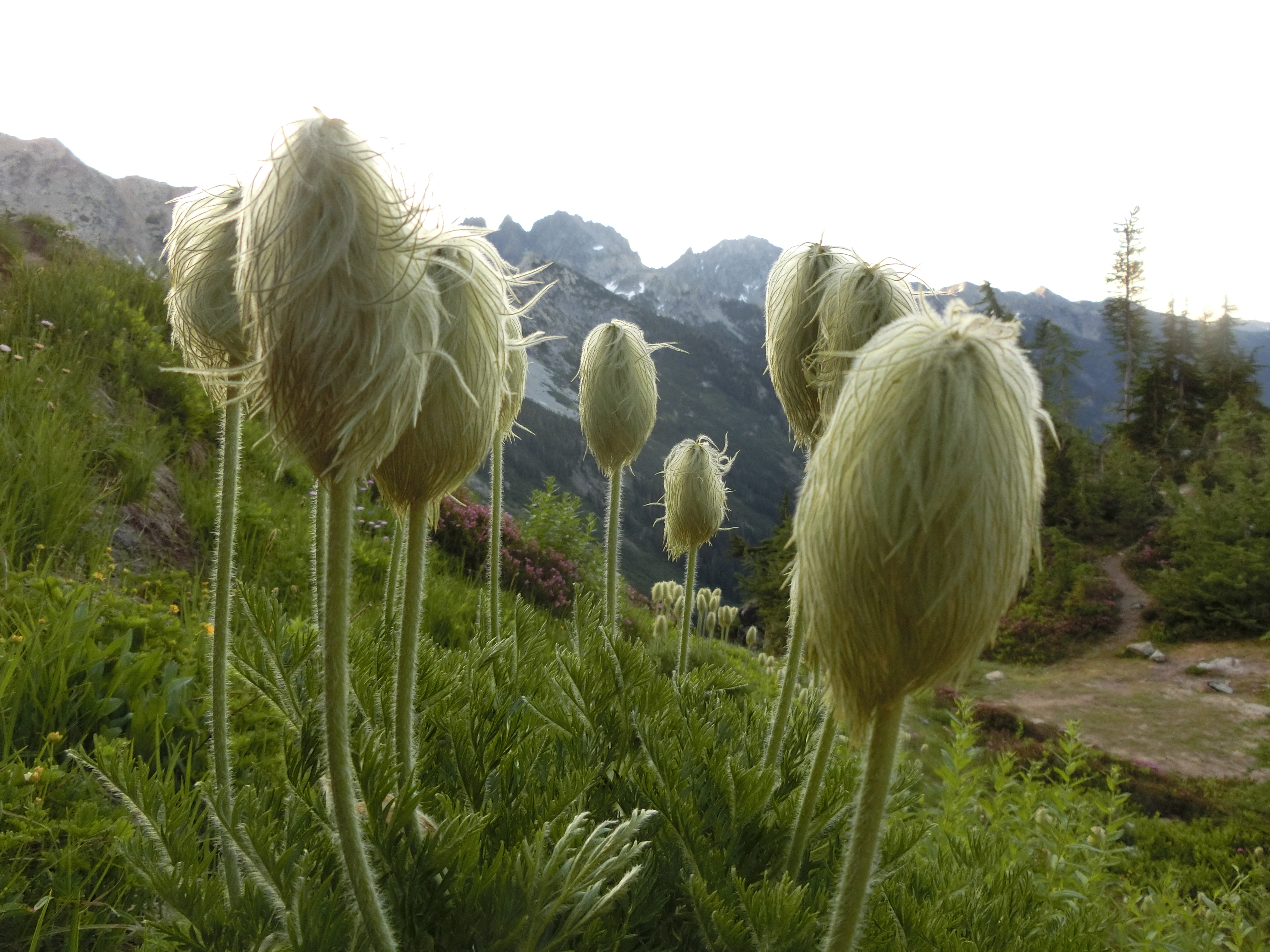 We visited Spider Gap one last time on Saturday morning and waited for the snow to soften before skiing back to camp. When we got there, we really got a taste of overcrowding in a beautiful and delicate area. There were people in all directions. Wading across the river, scouting for campsites, moving up and down the trail, posing for selfies, it was crowded like the mall! Someone had left his pack next to my tent (literally 2 feet away) and laid out a solar charger with a cell phone and some other electronics that I didn't recognize. When the owner of the pack came back, he didn't really interact with us, and his partner came up behind Jamie way closer than 6 feet. This is when we decided that Spider Meadow is probably best a mid-week trip from now on.

Back at the parking lot we had a brief lawn chair and beer session and the activity was nearly continuous. It was quite entertaining to watch the constant flow of people preparing to hike and limping off the trail. Three young guys pulled in next to us and one of them put a full GLASS bottle of Makers Mark whiskey into his pack followed by a full glass jar of pickles. He told us the pickle juice is a whiskey chaser. Mayhem! The activity was in all directions and was mesmerizing. We decided the best word for what we were witnessing was "spectacle". 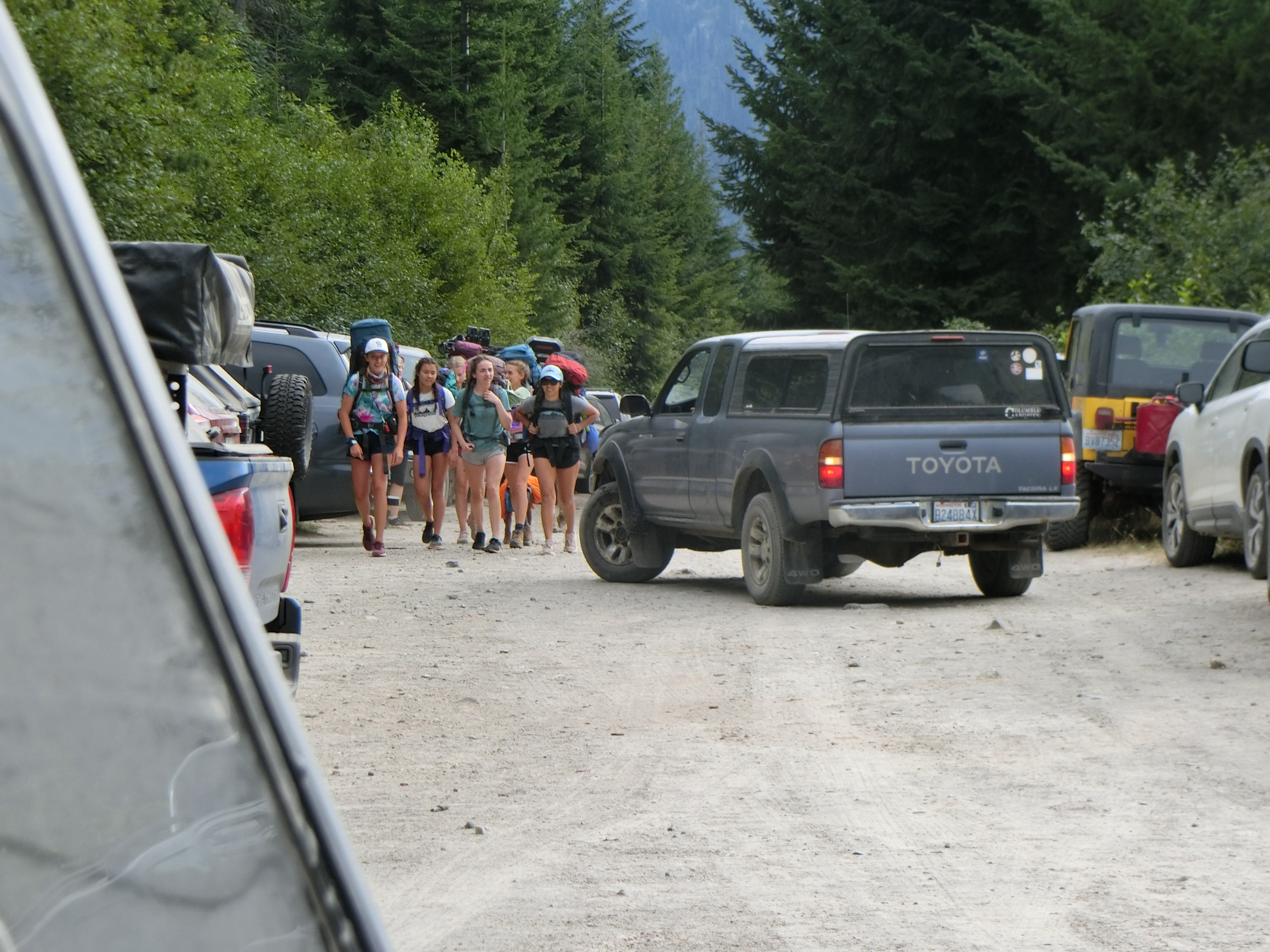 Here is the parking situation on Saturday around 5pm at Spider Meadow trailhead.

I'm glad we can count on you Mike for the parking lot updates! It's part of the experience and yet Mowich reports only ever seem to include suncupped corn etc... but I bet the parking lot was dustbowl mayhem this weekend... Great to read an open eyed report reflecting the current zeitgeist.

Mike, Your trip reports are GREAT. Skiing, camping, meeting weekend folks, one dog, large crowds, trail crossings, an ice berg which a swimmer loaded, plus the long drive from the parking lot   to the last vehicle in a 1 plus minute. Thank you for the report.😀

Cumulus - Yeah, those heat waves were visible in my camera. It was weird because they were over cold water.

Zap - thank you for the kind words! You are a constant source of encouragement

Neilforreal - I use a casio pocket camera with a good zoom. They quit making cameras and I don't know what I'll select when this camera gives it up. I really like the zoom, but don't want to carry a heavy camera.

Mike and I have done this ski a few times, we left the car around 17:00 it was I think the hottest day of the year so far.  About a quarter mile from our proposed camp sight I ran out of gas, not sure if it was food or water but I wanted my mommy.  Mike was the perfect partner and encouraged me along, I staggered into camp about a half hour behind schedule, and about ten minuets before headlamp time. With food and water I rejoined the living, and was not the worse for wear.........my best days were a long time ago!  We had set our sights on a few bigger lines, but were spooked by the overhead hazard and the hot weather.  We played the sun, and managed to have some great turns, in spite of the fairly large sun cups.  As Mike said there were plenty of people, in a place where we seldom see a sole,  Covid I guess.  A few Pictures to add to the stack. 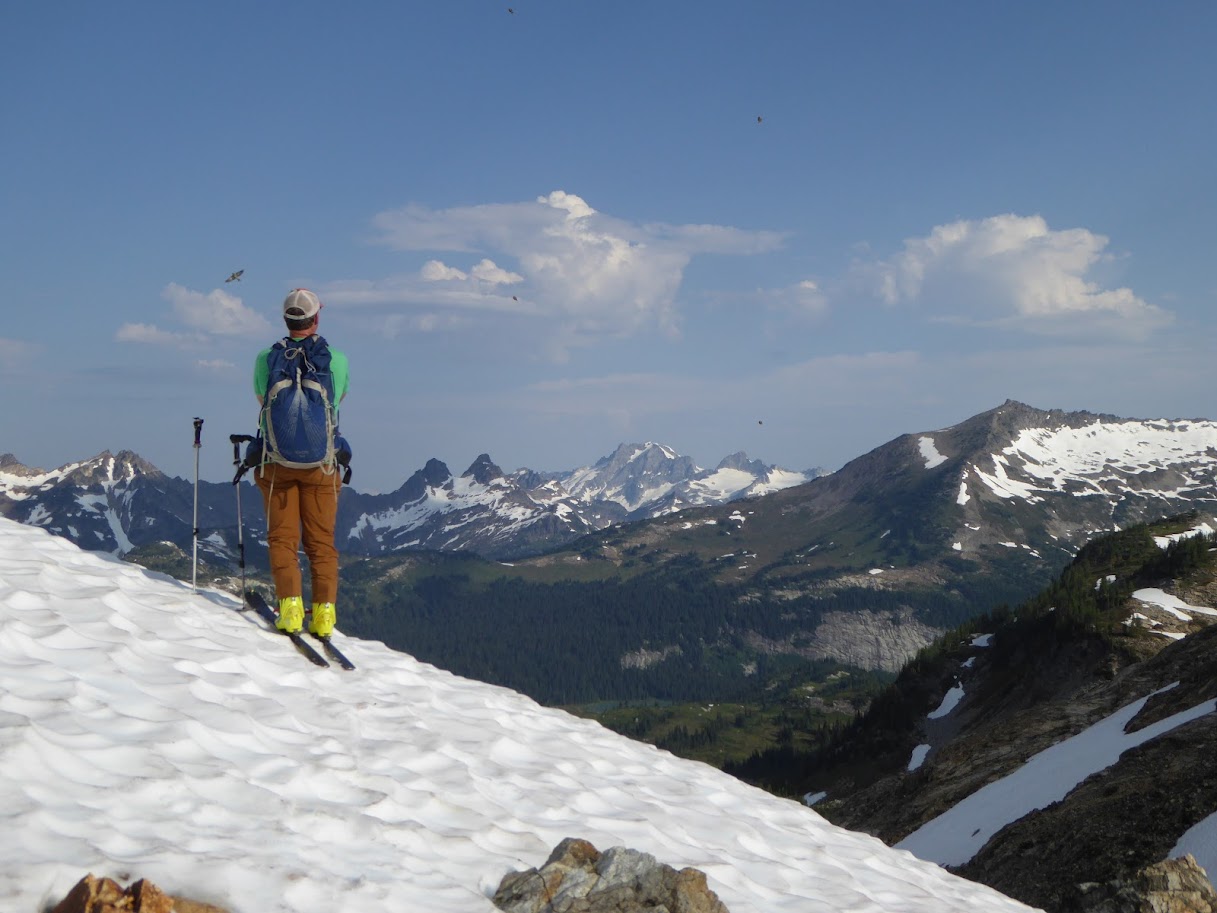 Mike on his toothpicks. (Chopsticks) 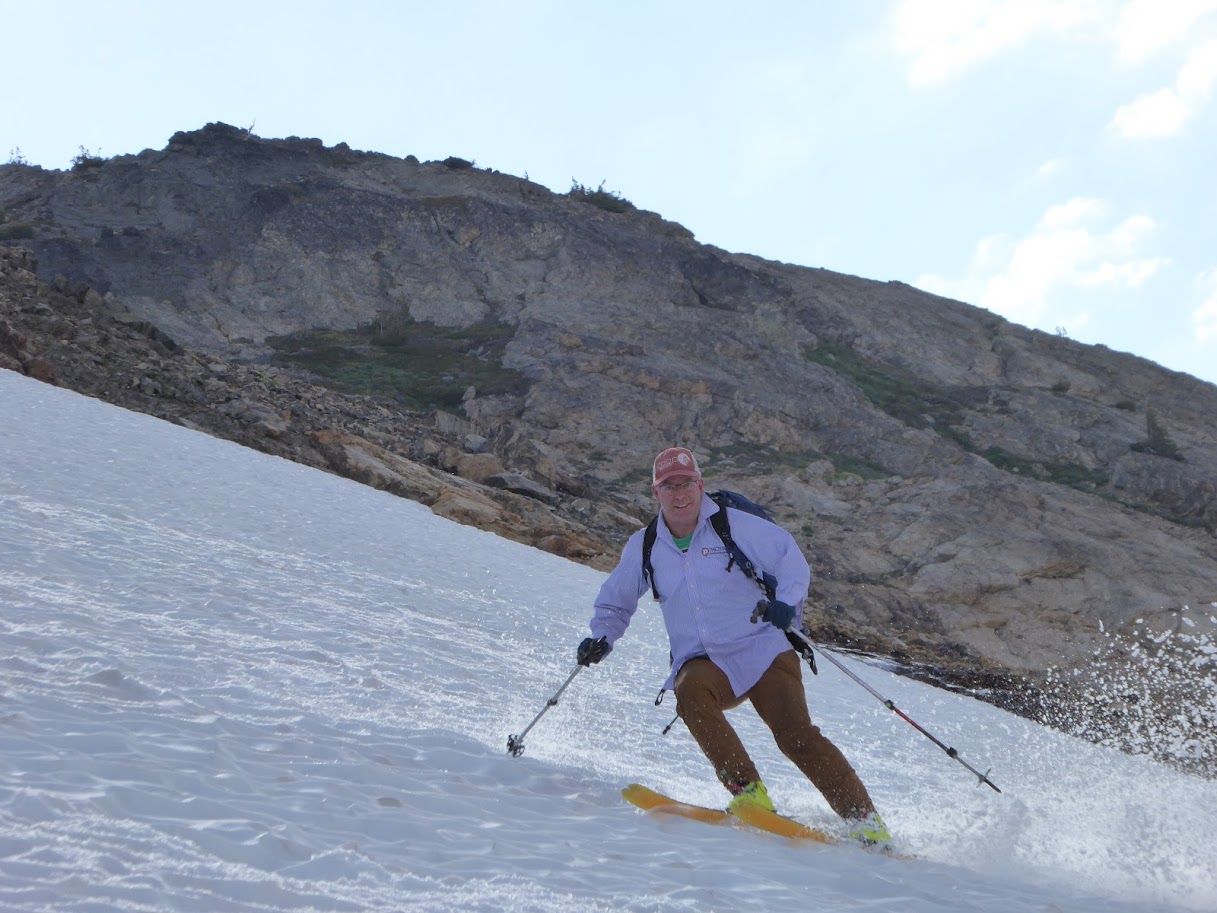 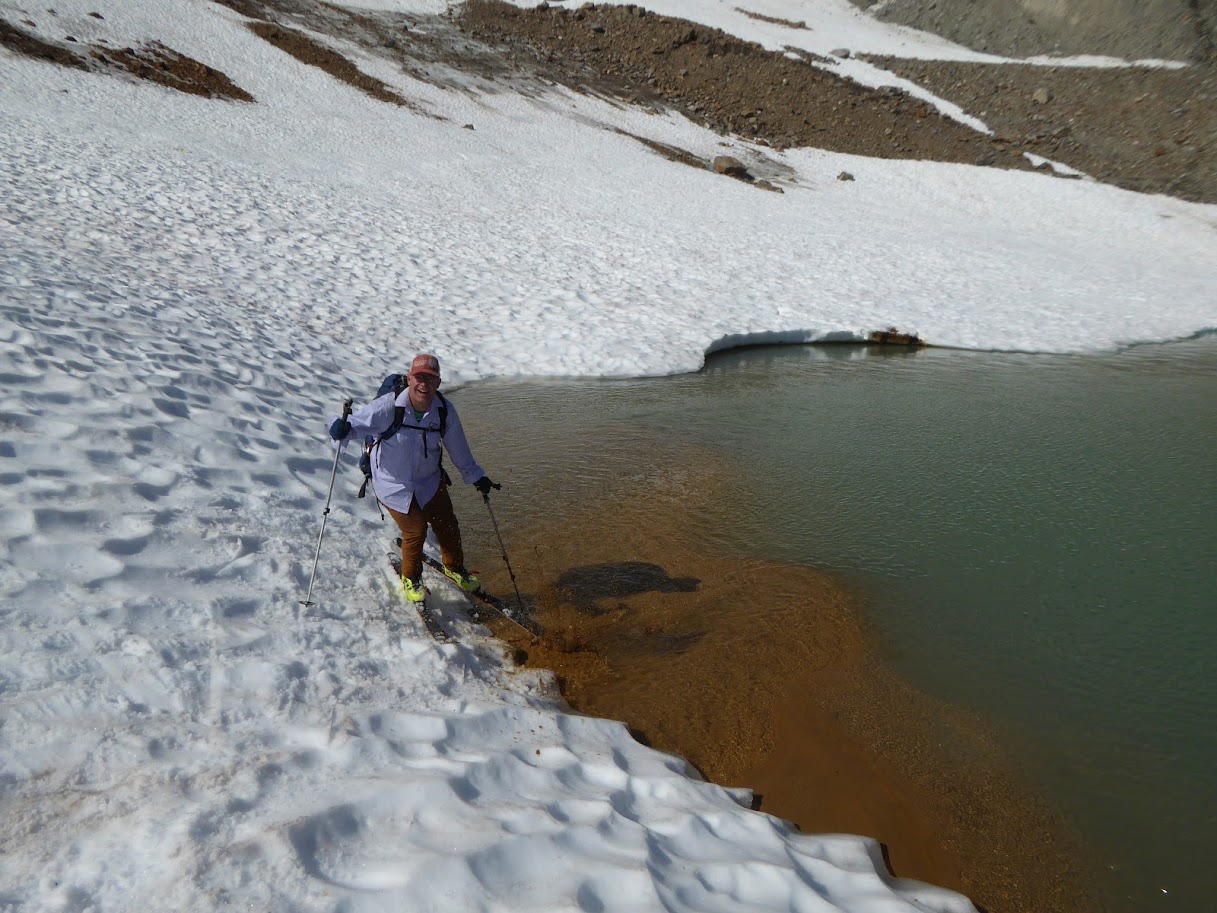 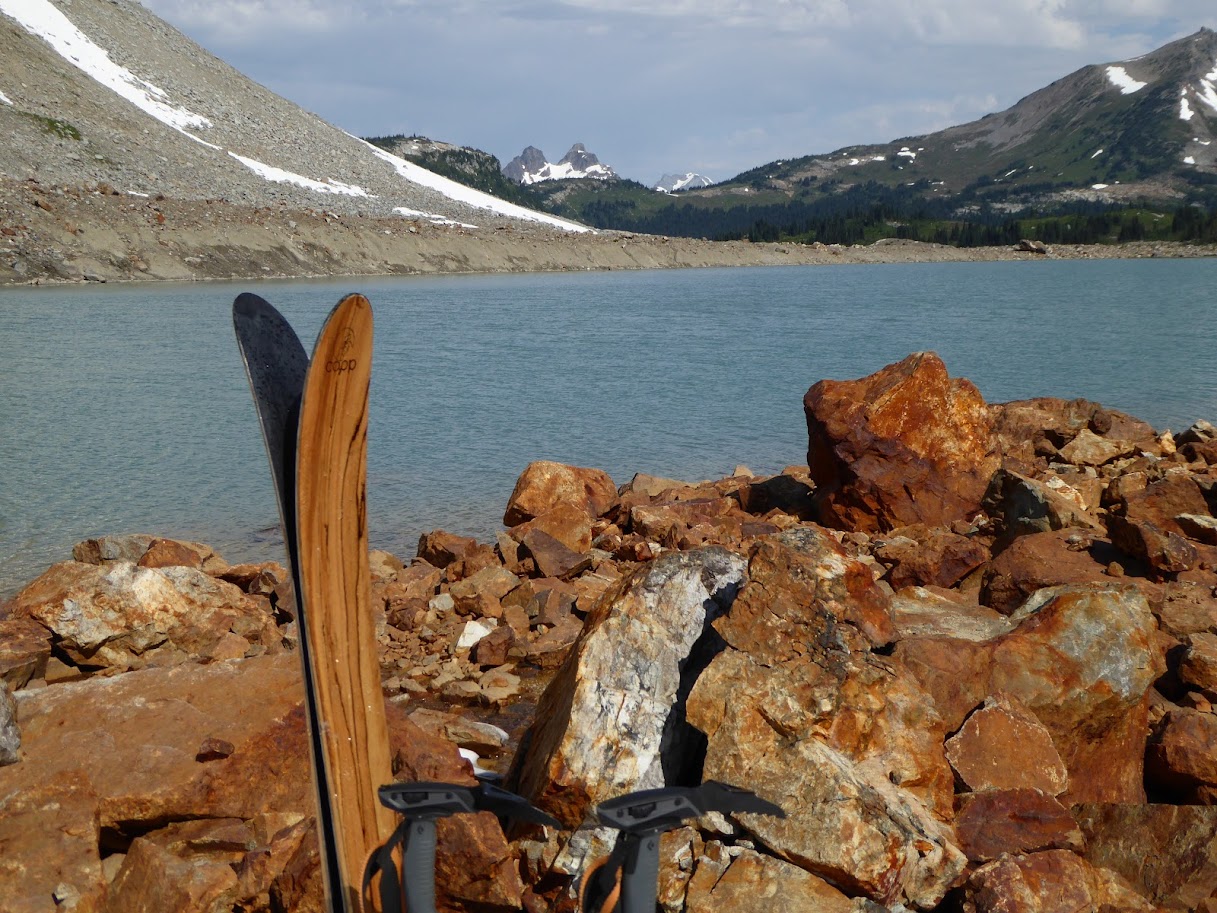 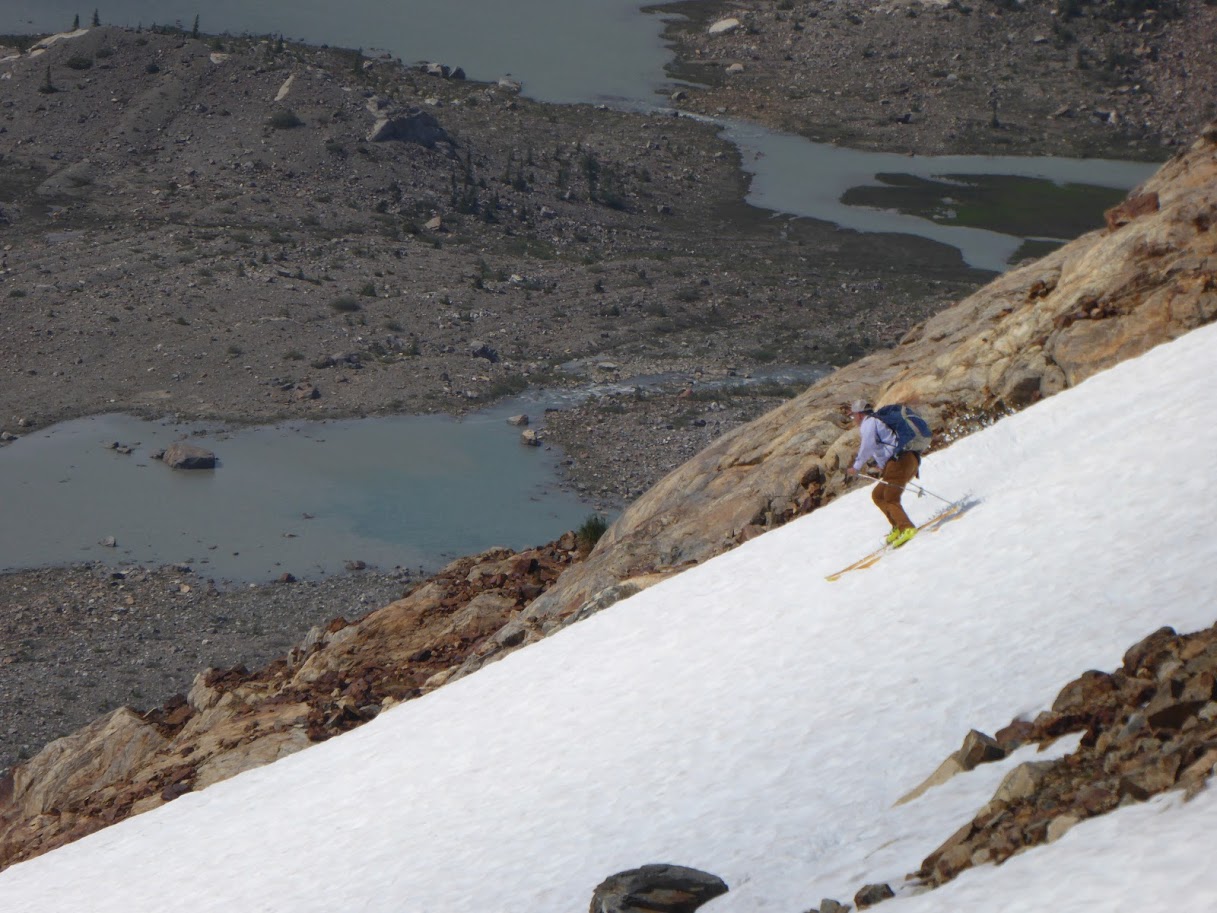 A great trip, but as Mike said a spectacle.

You guys know how to have a good time. Enjoyed the photos - double whippies 4 life