[First TAY TR!] Met up with a couple other newer TAY-ers (@OtherAaron and @Masedoggy) for a chill tour up Silver Bowl via Hyak.

The road's melted out and passable for most cars to maybe half a mile after the hairpin. Started skinning around 8:30 but were still among the first headed up for the day. The sun was out and things got hot fast, lots of rollerballs from days prior. From the large knoll below the NW ridge headed up the last bit to the ridge proper, and on these easterly aspects the snow was wet and slushy enough already to cause us some concern. Tahoma greeted us with its customary majestic bulk from the rocky ridge, and the jagged skyline of the Snoqualmie area peaks to the north made occasion for a brief but joyful moment, taking it all in. Deciding not to dally or go anywhere near the cornices on the ridge, we skied down mostly following our uphill route, through the W part of the bowl. Snow was sticky and athletic, but it felt so good to be skiing, and just to be back up in the mountains after two months of staying in the city. And on a bluebird day too!

We saw at least one party coming up the eastern side of the bowl as we headed down. The road was totally filled with cars, skiers, hikers, dogs, and a couple snowmobiles when we got back down at ~11:15, and we were glad to have gone up as early as we did. From a pull off partway down the road I found a lovely forest lunch spot, and ended up coming across some huge old growth Dougs and a lean-to someone built down by Mill Creek. Great day! 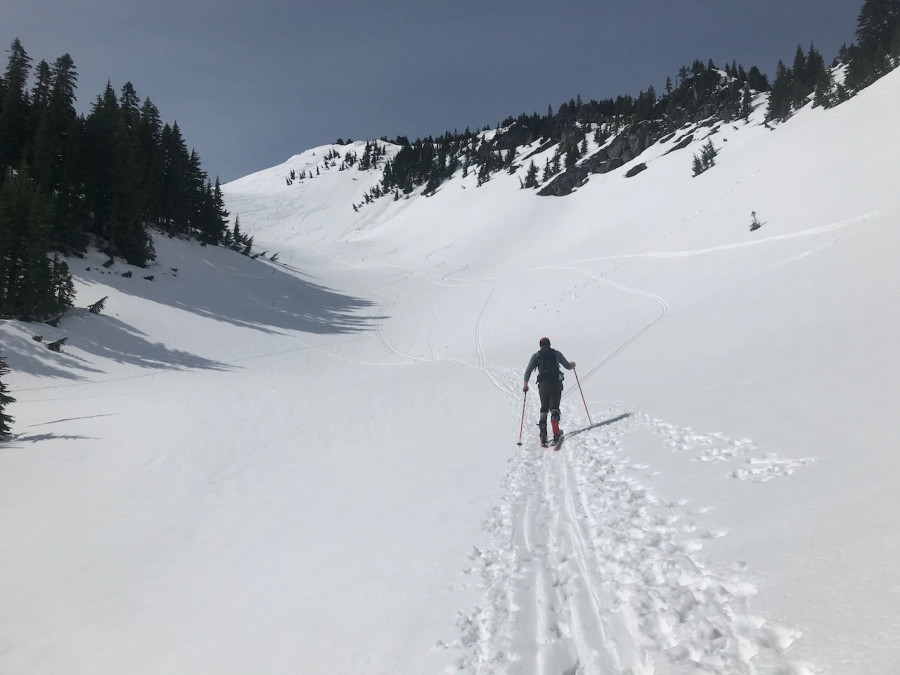 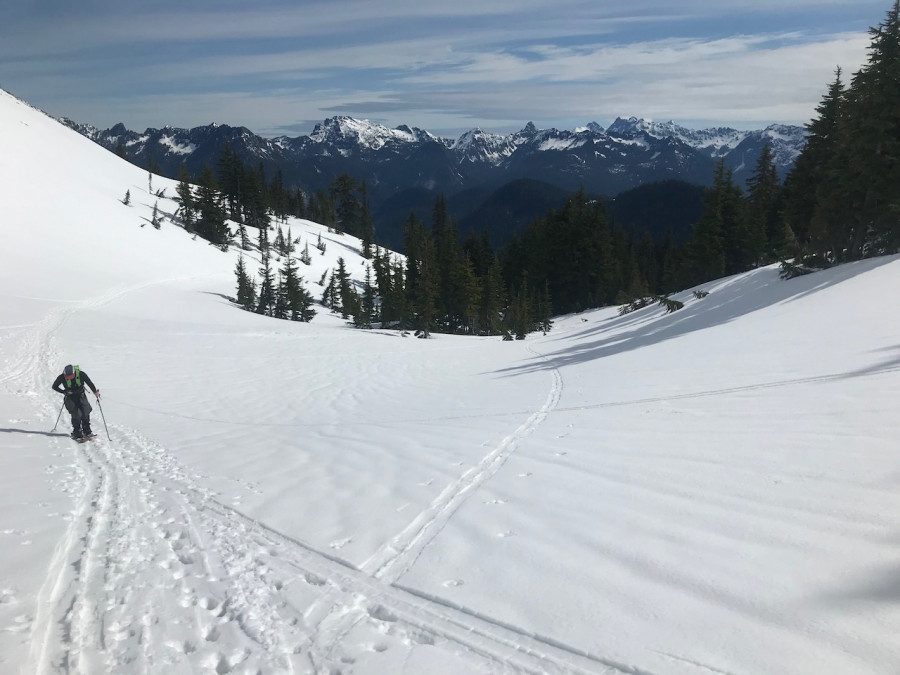 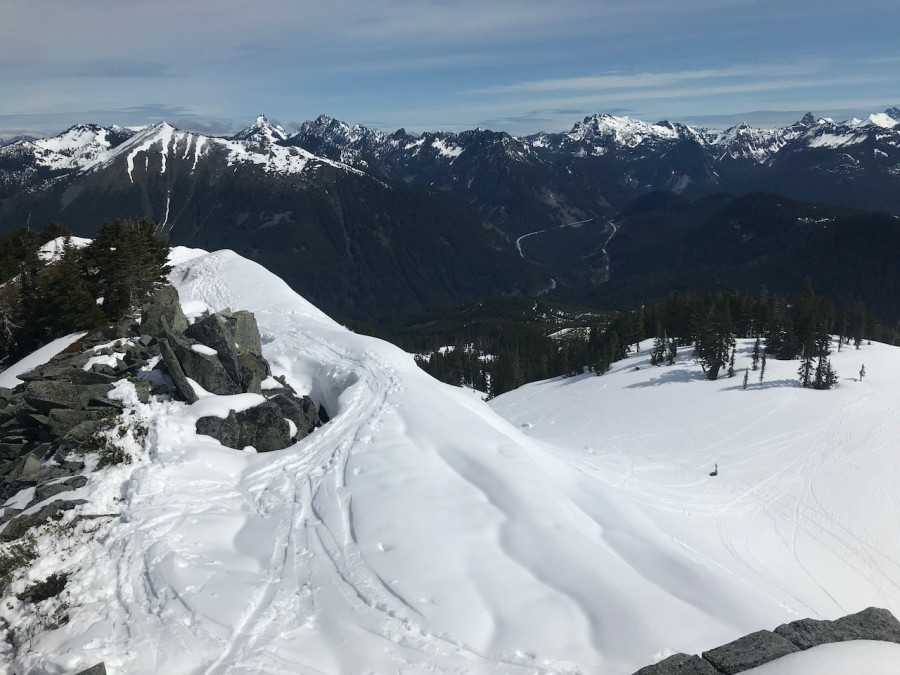 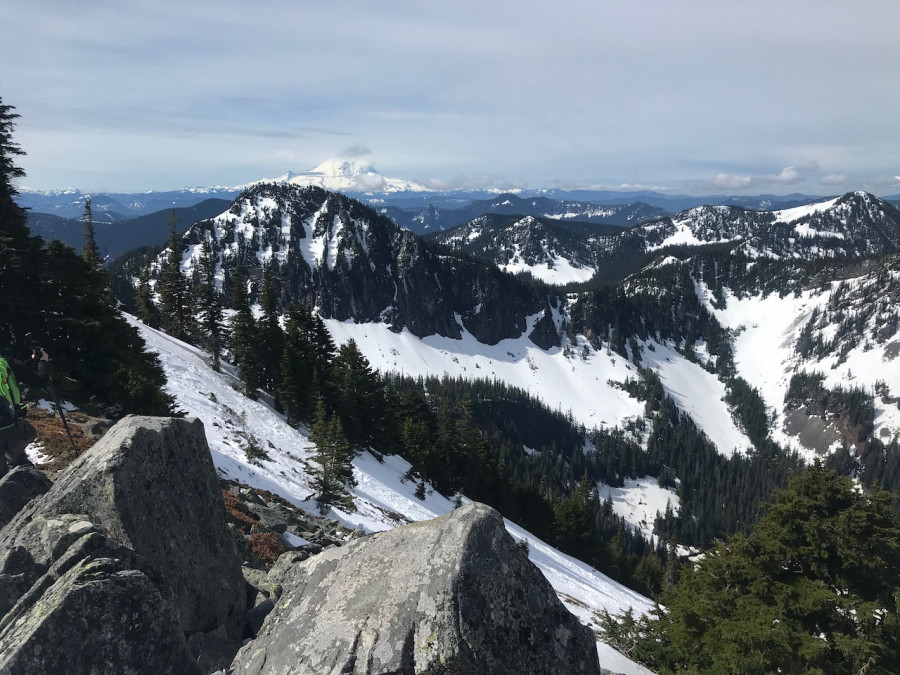 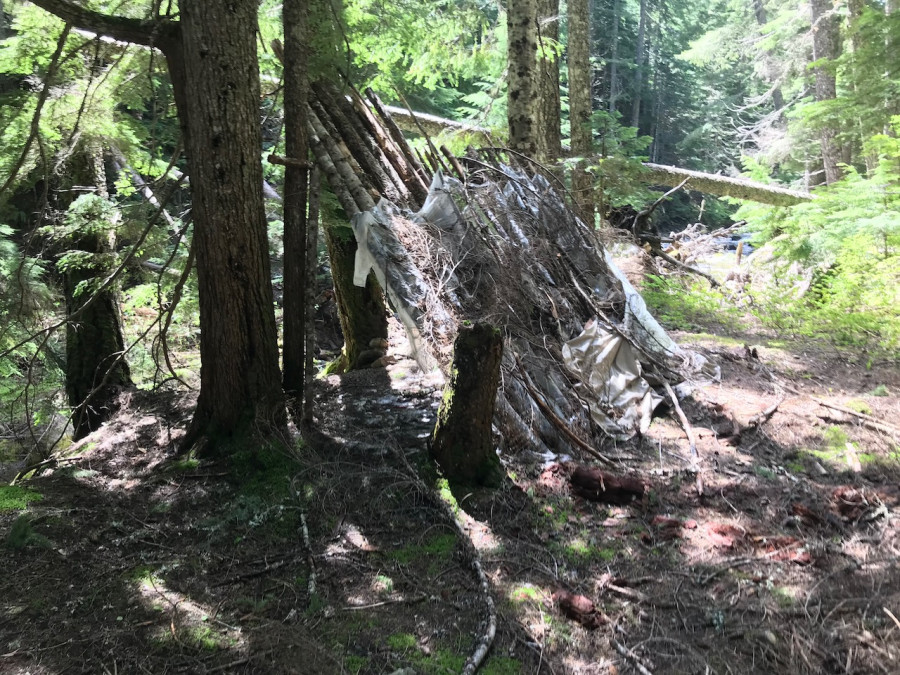 Ah so that was you early birds getting the worms, nice work! Those sledders came up and thrashed the upper bowl, highmarking the ridge most folks ski down (but fortunately right after I rode down it). So there'll be some trenches up there for a bit on that side 😠

I had a more leisurely start of ~10:50, but I still got a pretty good parking place (the ol' Wildman method of backing up right to the snow 😜). GPS says it was right around 3600' just downhill of where the Mt. Catherine trail crosses the road (which, FYI, the lower stretch is almost entirely snow-free until you get into the woods at Twin Lakes). Some lady heading out on snowshoes with her daughter found my parking spot to be "inconsiderate" and she went as far as to call me a "jackass" before storming away. Some people these days...

Anyways, found the summit a little after 1, played it conservatively only riding down maybe 450' towards Annette. It was hard to tell what was still sufficiently covered and what might be sharks covered with the few inches of new from the previous days. Plenty of manageable wet loose action out there, though, and I watched a refrigerator-sized chunk of cornice break-off when I was making my last trip up the north bowl to descent down the waterfall line, so don't hang-out below them and give them a wide berth while on the ridge.

Crowds were rather light, despite the number of cars parked on the road. I did encounter quite a few folks on foot postholing around Windy Acres surprised to find so much snow. Speaking of which... there were no carries at all through the clearcut and the trees into the bowls. Both chutes off the summit into the skier's right side of the summit bowl still go and one can likely follow the main drainage down to the PCT, if not even a little below, shortening the flatness of the road and avoiding the clear-cut maze entirely (FWIW, the best route both up and down appears to have been recently flagged by somebody - thanks for that if it was you).

Hey pipedream, we briefly chatted at the road end just as you were gearing up about the parking ... silly stuff. Glad you had a good day out! Those sled tracks are pretty off the chain.

Meira and I went up for a sunset tour and it was great. I think we started skinning at 6:30 pm. Summit by 7:50. We had brought some margaritas and had the place to ourselves. Skied back down what I'm thinking of as the "main run" fall line off the knob. Thanks to all the tracks, it was set up like an awesome slush bump run. Back at the road, we repositioned the car and grilled sausages in solitude as the sun set with a view of Twin Lakes couloir. Nice evening.

Congrats on the first TR! New site is really proving its worth

Thanks for the pictures and report!