Spring was in the air, and with stable weather throughout the course of the week, I had an urge to get out for a long, exploratory day. Turns out, my buddy Steve did too. We messaged back and forth early in the week and Steve and his friends had the idea of venturing out to Mt. Stuart via the Sherpa Glacier. As a skier, my mind immediately drifted to the Sherpa Glacier Couloir, an amazing line on the north side of the mountain that is just begging to be skied.

The approach to Mt. Stuart is a long one when the road is gated; you must start on Icicle Creek Road and head up the Eightmile Road to the Colchuck/Stuart Lake trailhead (approximately 3 miles), then another 1 mile along the trail to where the Stuart Lake Trail branches off from the Colchuck Lake trail. It is easy and fast skinning, but can feel monotonous and long. To approach the Sherpa Glacier, it is best to branch off the Stuart Lake Trail from the meadow around 4,500' and head SW up Mountaineer Creek to the base of the glacier. This portion involves many creek crossings and depending on snow coverage can be a bit funky. Once you reach the base of the Sherpa Glacier the route is incredibly straightforward: UP. The glacier narrows to a clear couloir which climbs SW (facing NE) towards the ridgeline between Sherpa Balanced Rock and Mt. Stuart. The top of the Sherpa Glacier Couloir gives you view of the Cascadian Couloir to the south. From the top of the couloir you have the option to continue along the ridgeline to the summit.

We slept at the trailhead on Friday night, preparing for an early start on Saturday morning. The weather on Saturday was supposed to be clear, with high clouds and scattered sunshine. We anticipated this would translate to a constant dose of sun, rather than spread clouds, as is typical on the eastside. We agreed to get moving by 5 AM up the road; we anticipated a long day, with a mix of road walking, crusty skinning on trail, a bit of shwacking, and some booting. The road from Icicle was melted out for about 1.5 miles; we carried skis on our packs and started out in trail runners. Around 1.5 miles in (more exactly, where the downhill truck slowdown sign is) we stashed our trail runners on the side of the road and started out skinning...well, except for Josh and Steve, they kept their trail runners all the way to the Stuart Lake meadow, impressively. From the meadow we began heading up the Mountaineer Creek drainage towards the Sherpa Glacier. Steve led the way on the east side of the creek, keeping us away from the steeper slopes of the west side of Mountaineer Creek. While there were many creek crossings, nothing was too crazy. The snow was mostly firm in the morning crust, not quite frozen but breakable crust. We poked out to the base of the Sherpa Glacier and BAM...there it was. Wow...what a sight. 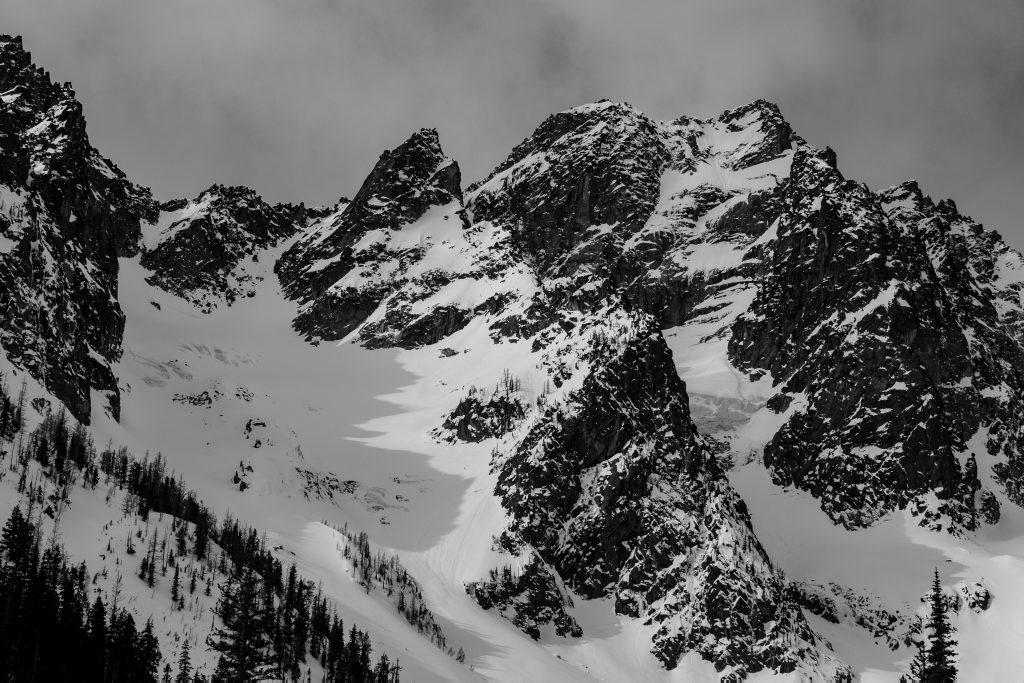 Looking at Mt. Stuart from the meadow.

The Sherpa Glacier and the Sherpa Glacier couloir are on looker's left. The snow was hot pow which meant...GLOP. Wow it was bad. Thankfully Josh saved me with some magical skin wax spray that saved the day for me. We switched back and forth on the Sherpa Glacier up to the couloir, pretty uneventfully. Just above the bergschrund we transitioned to booting up the couloir to the ridgeline. The snow was stable and only moderately wind affected, not the horrible sastrugi I was expecting. The northern tilt of the couloir kept it protected from the sun, but the slight eastern tilt of the apron put it in the morning sun. 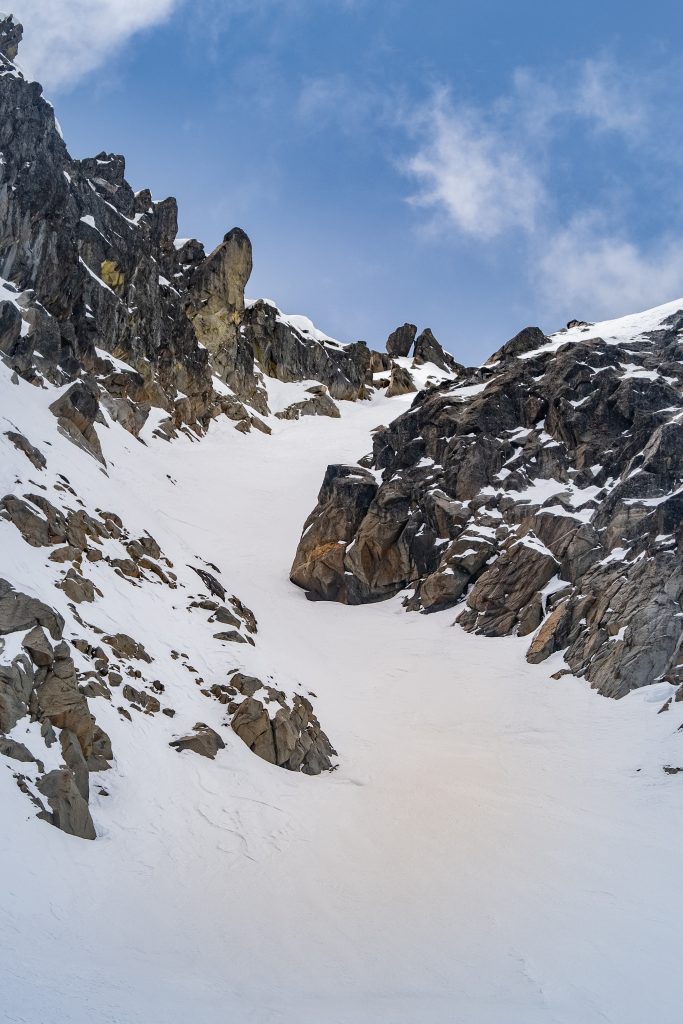 We topped out on the ridgeline around 9 hours into the day and opted to ski down, rather than going to the summit, mostly because of concern of the southern aspects we would have to traverse on the way to the summit...but also because we were tired. We clicked in at the top of the couloir and began to ski down. Steve and the rest of the team skied down a bit along the ridge to a wider entrance to the couloir on skier's right (further E along the ridge). I opted to ski from the top of the line; the line topped out around 45 degrees or so, nothing crazy. 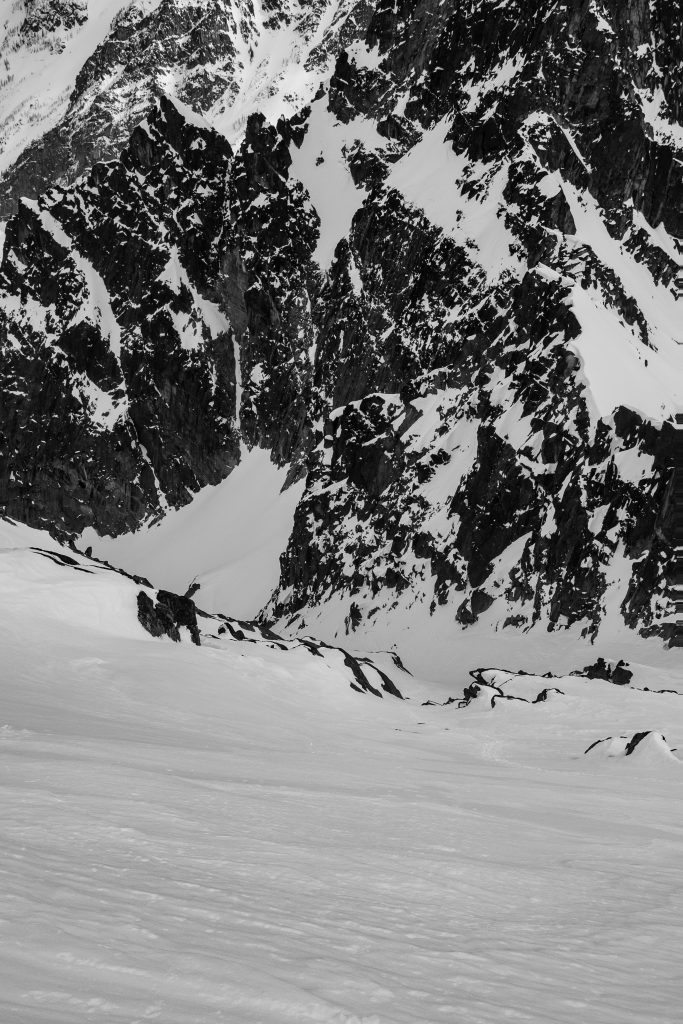 Looking down the line.

I linked up jump turns and made my way down to a safe spot around the corner where I met up with Steve. 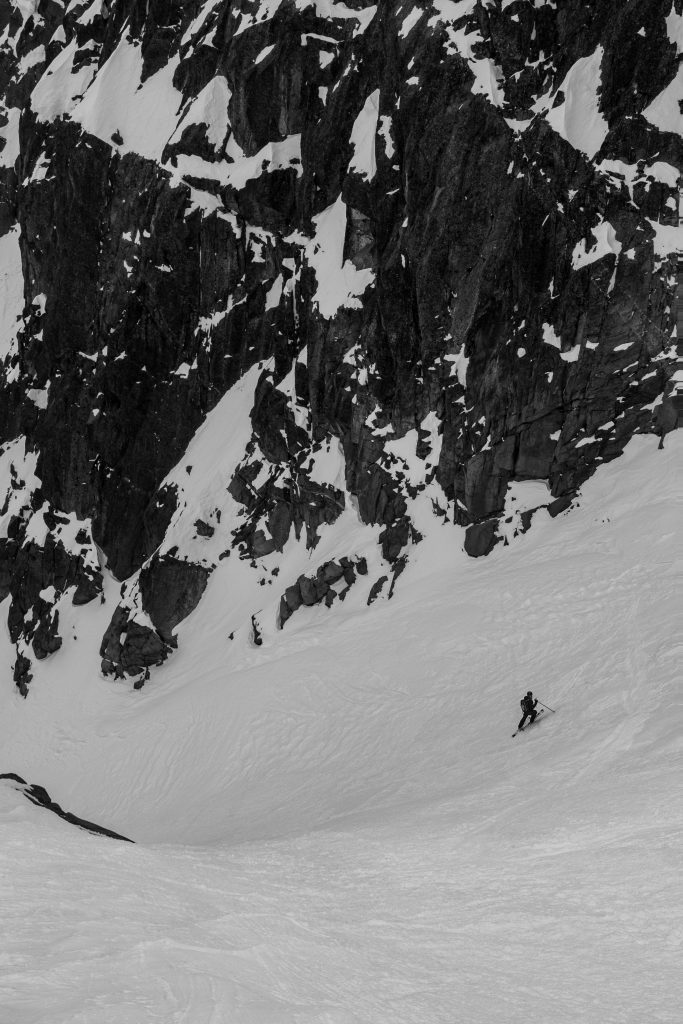 Steve resting mid-way down the line. We let Westy, Josh, and Ryan meet us down at our safe point, then skied the rest of the way down the couloir. The snow on the upper portion of the glacier was excellent; further down on the eastern slopes it turned to pure potatoes...YUCK. Can't get it all I guess. We still had a long exit out, almost 3 hours. We skinned out all the way to the branch of the Stuart Lake trail with the Colchuck Lake trail, then were able to ski the semi-death luge down Mountaineer Creek to the trailhead. A ski along the road to our stashed shoes, and then a walk back down the road. 27 miles, 6,000', and a LOT of fun.

Great TR more of those good pictures as well. Me, I want to ski the whole thing in boot top powder, or perfect corn. Thanks!