Two-shot panorama, with a lee wave cloud visible to the east past Panorama Point.

Only one other skier made it to Muir, it was very icy above 9000 ft, ski crampons were essential and it was barely skinnable even with those. There was a solid rain crust all the way from Paradise to Muir, topped by about 4" of new powder lower down, except above 8500 ft where the new snow was windblown exposing large areas of crust, and above 9500 ft where the surface was nearly 100% rain crust with only tiny patches of new snow. The rain crust was very nubbly, textured like rough concrete, which made skinning it much harder (reduced traction with less area for skins to grip) but made skiing it much easier (increased traction due to rough surface, not at all like skiing smooth ice).

The rain crust underfoot at about 9600 ft.

I had no idea that it had rained up to 10000 ft, according to forecasts and data the freezing level had only reached about 7500 ft during the weekend's system, and 6500 ft during the much wetter system a few days earlier. Telemetry shows temps only reaching 23 °F at Muir on Tuesday Nov 22 and 27 °F on Saturday Nov 26, but clearly some type of liquid precipitation, perhaps supercooled freezing rain or fog, had fallen to over 10000 ft. The snow conditions were such a sharp contrast from the 2 feet (!!) of light powder on the Muir Snowfield last Sunday Nov 20, although that powder had turned out to be almost unskiable due to its low density and slightly inverted density profile.

Anyway, despite the rain crust, this was such a nice day, sunny and light winds, with only an occasional stronger gust above 9000 ft between periods of near-calm. A massive avalanche fell from Nisqually Icefall just after 3pm, sending up a huge cloud of snow which briefly blotted out the sun and reached us all the way over on the Muir Snowfield. I shot 49 seconds of video: http://www.youtube.com/watch?v=KT8n53sAwVg

We skied down at 3:40pm, the day actually getting brighter as we skied down after some high clouds moved past, the snow frozen and icy but edgeable. The snow below 9500 ft was better, you could ski long fingers of nice windpacked snow between the icy parts. And it was really nice below 8500 ft, about 4" of powder atop the rain crust all the way to the parking lot.

We skied out via Pebble Creek, which has only a short rocky section to negotiate near the creek (kept the skis on), while the rocky winter route along the ridge is barely covered enough for skinning and not even close to covered enough for safe skiing.

The rocky section at Pebble Creek, still not fully filled in.

I lingered long enough above Panorama Point to catch the glorious sunset, watching a deck of clouds roll in from the west through the pass separating Mount Rainier from the Tatoosh Range. A thin crescent moon lingered in the sky above Mount Saint Helens.

Got first tracks in 4-6" of powder down Pan Face by twilight, the handful of other skiers this day had all gone out via Edith Creek Basin instead.

Dropped into the cloud deck below 6000 ft and reached the car in the last daylight, my clothing quickly having been encased by a thin shell of freezing fog. Seemed like the proper end to a fine day, so nice to have gotten out for some pretty good skiing and outstanding sunset views.

11/29/11 4:52am
shailcaesar!
Great TR again Amar! Your the reason I've started to do this cockamamie sport ;D How do you like your Stokes? I've got last years and they rock, but apparantly this years model has a superior forward binding position?
11/29/11 7:04am
chuckm
Here is a link to a few more photos of the avalanche off of Nisqually Ice Fall. We turned around at 9000' because of the increasing boilerplate and then had fine skiing down to Pan point turning skiers left down to Mazama Ridge and on down to the road.

My Stokes are even older than yours, I got them in April 2010 (just after they were introduced in mid-season that winter, if I recall correctly).

I love them so far, I've mainly used them as a powder-only touring setup, since I have several other AT setups more suited for other conditions. So I only have 25 days on them so far, including 2 lift-served days last March. Did not ski well for me on firm groomers returning to the lifts at first, but eventually figured out how to make them carve nicely on firm snow. That came in handy on this trip, and the Stokes skied fine on the ice and the windpack and the powder.

I just bought ski crampons wide enough to fit them 3 weeks ago (the Dynafit 110 mm crampons, in addition to my other 80 mm and 92 mm Dynafit crampons). So I can finally use them on trips like this to Muir in winter conditions where powder is not guaranteed, and ski crampons may be essential.

I hadn't heard yet that they were moving the binding position forward this year -- but I like their somewhat back position just fine. Also, I'm skiing them in a 182 cm length and I'm only 5' 7", so having a rearward binding mount and thus short tails is helpful when skinning up sharp switchbacks.

11/29/11 7:41am
andrew-carey
Super video!
11/29/11 7:49am
freebird
Great pics Amar!
It was an awesome sunset!
We experienced similar conditions on the Paradise.
Wind buff with icy patches up high improving to 3" to 4" inches of powder in the flats all the way to 4th crossing.  Some of the sunnier slopes down low had a crust on them too.
When I saw your car in the parking lot close to sunset, and looked up at the snowfield in spectacular lighting, I wished I could be back up top for one more run.

Here are a few photo's and a video from the day...

Amar, thanks for the ski crampon technique suggestion, it made a huge difference. 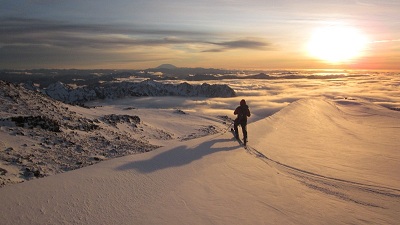 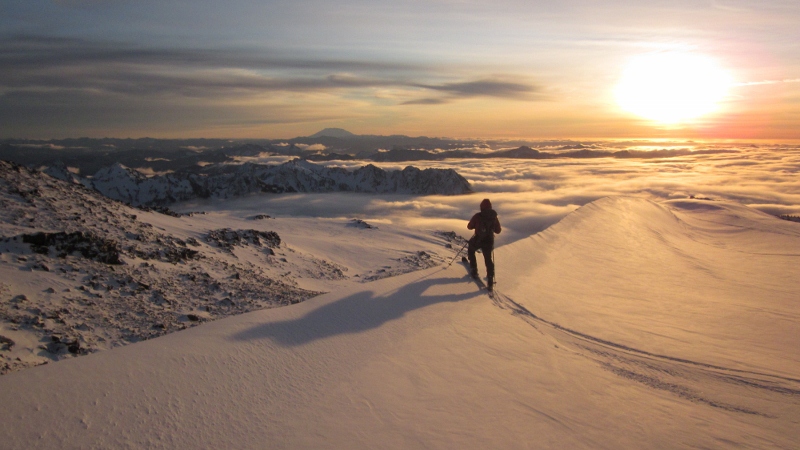 thank you sheispiste, the trip had so many of the same sunset conditions from the first week of october where i was influenced and learned my first  real lesson in how to speak Australian!
12/1/11 2:34am
briant

I have to say with the new 'rules' and all, I think we can all consider truely making it to Muir if you take a picture inside the shelter since that's technically the camp!

Almost made it this time!

Jk, great shots, awesome pictures and like it was said before in this same thread, you're the reason I got into AT Skiing and have touched people all around the US (Even a dude in Texas)
12/1/11 9:07am
steph-m

author=saxybrian link=topic=22534.msg96343#msg96343 date=1322763008]
Jk, great shots, awesome pictures and like it was said before in this same thread, you're the reason I got into AT Skiing and have touched people all around the US (Even a dude in Texas)

Awww, shucks. What a nice thing to say to Amar  ::)
12/1/11 10:17am
shaman
Such beautiful pics!
12/2/11 8:55am
splitboard-graham
Amar,
i'm looking into getting a new camera, and i like the low-light shots you were able to get - what camera were you using for these shots?
Thanks!
Graham
12/3/11 2:16pm
amar-andalkar
I'm using a Canon SX130 IS, which is the 11th Canon digicam I've owned since 1999. A great little camera, with a big 28-336mm zoom range and excellent image stabilization, but still pocketable (even in the chest pocket of my standard Patagonia R1 pullover) and it uses AA batteries which I like. The current version is the SX150 IS, which is nearly identical except for a few more megapixels. If you prefer not to use AA batteries, the Canon SX230 HS may be a better choice, it is smaller but with more zoom (28-392mm), and has much better low-light performance and high-speed shooting due to its CMOS sensor -- however, it is more expensive and uses an expensive proprietary Li-ion battery, which is a big strike against it in my book.

Note that all of the photos in this TR were not color-modified in any way in Photoshop, they are straight-from-the-camera shots except for resizing (and a small brightness increase on one of them, the one just above "Got first tracks..."). Most were taken with -1/3 to -2/3 EV of exposure compensation, which is pretty standard for getting good shots outdoors on bright snow and also (strangely enough) in low light.


Went back up to Muir only 3 days after this trip, and enjoyed another near-sunset ski:

12/6/11 5:23am
splitboard-graham
Thanks Amar. I've been looking at some of the Canon "bridge" cameras, so its good to hear some reviews from someone using it for the same reason.