On Mon-Tues Andrew Richardson and I climbed and skied the Success Glacier Couloir route on Mt Rainier. The warm weather provided amazing ski conditions for a 5000´ run from the summit down to camp, and less than amazing conditions for travel on the lower mountain. The couloir itself still has great coverage and little debris or rockfall. The approach is serious stuff this time of year and is probably the reason this route sees little traffic despite holding some of the best ski terrain on the mountain.

We approached via Comet Falls/Van Trump Park and took a pretty direct line up to 9K, with continuous snow starting at 5K just above Comet Falls. Vantage points along the way provided us with an encouraging preview of the line. We then traversed across the Kautz & Success Glaciers to a lowish angle slope at 9400´ where we could dig out a tent platform that felt somewhat protected from the firing zones all around us. Numerous open crevasses on the glaciers required creative and circuitous routefinding. Loose rock and rockfall on the cleavers & moraines added to the excitement. We expected to be lounging around at camp most of the afternoon; instead we arrived at 7PM.

Tuesday morning we left camp at 4AM for our summit push. The warm air overnight only froze the top layer of snow at our camp elevation, but it was enough to require ski crampons for some delicate skinning around crevasses up to the entrance of the eastern (lookers right) couloir. In the apron below the Success Couloirs we observed a recent wet slab release and the same unstable layer that others have noted from the Van Trump/Turtle area. The bergschrund was mostly open but still passable in spots. From there we booted up the eastern couloir with little difficulty. The first and second rockbands are still filled in with snow and skiable; the final one requires only a few steps of easy climbing over a bit of exposed rock.

We hit the sun around 7AM, and by 9 southerly aspects were starting to soften. We regrouped at 12,800 and agreed on 10AM as a turn-around time. I was feeling strong and decided to push the pace, reaching Point Success just after 10. It was Andrew´s first ski trip since the start of Covid so he opted against racing the sun and hung out on a nice ledge while I ran up to the summit. I promised him that he didn´t miss any good skiing, but the truth is that it was all pretty good!

On Point Success I enjoyed a few minutes of t-shirt weather before preparing to ski. I waved to a party on Columbia Crest but saw no tracks or signs of anyone else having made it to Point Success. The top 500´ down to the upper rockband was bulletproof snow, no biggie as the slope angle is pretty mellow through that section. Everything below that skied like a dream – 5000´ of hero corn on sustained 40-45 degree slopes. After meeting back up with Andrew at 12,800´ we took turns skiing long sections down to camp with incredible views south and west.

We didn´t waste much time packing up camp due to concerns about snowbridges on the glacier below. Rather than retracing our approach route we opted to ski further down the Success Glacier and cross around 7500´ which ended up being much better. The descent from there down to the Van Trump basin was warm & wet but uneventful. The mountain had one final surprise in store for us when we returned to our shoe depot at 5000´ and found that someone (or something) had made off with Andrew´s shoes. He guessed it was an animal, but I´m doubtful as my shoes were way stinkier than his (and therefore more attractive to animals) and were left alone. Go figure.

All in all this was an awesome trip - due to the solitude and high quality skiing this was my favorite of the 3 routes I´ve skied on Rainier. 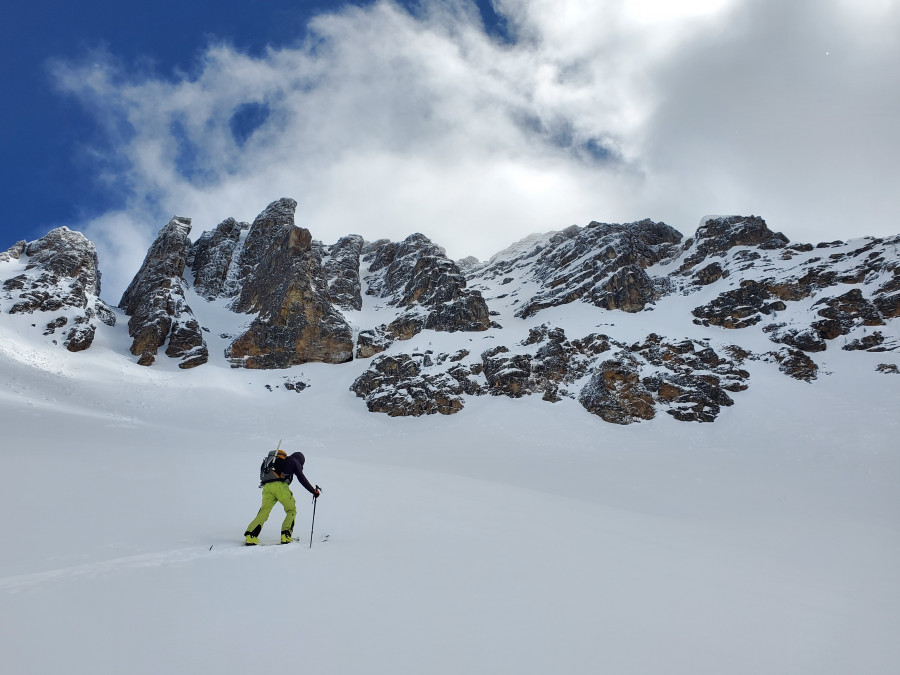 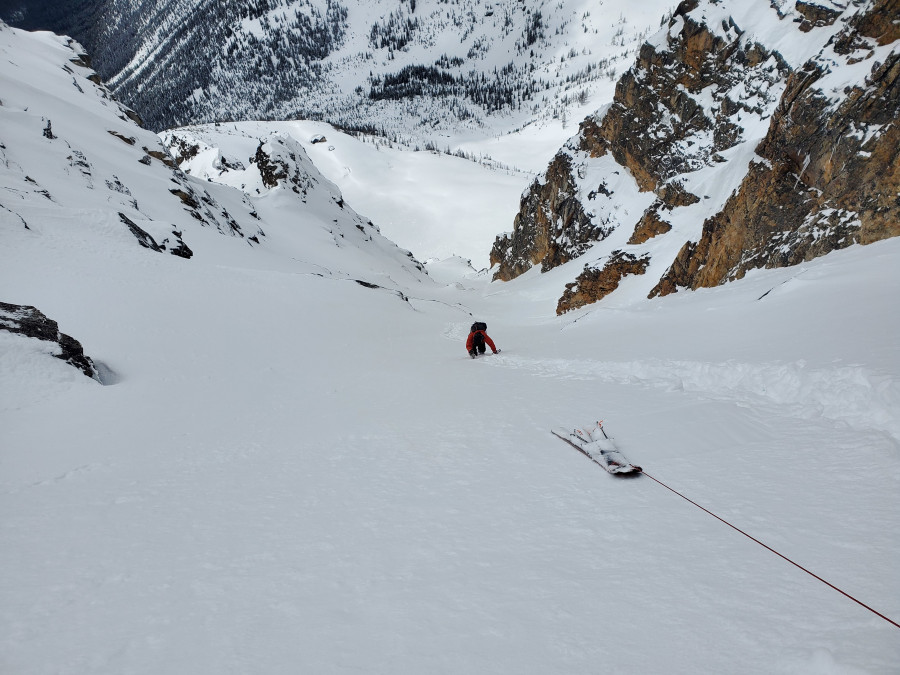 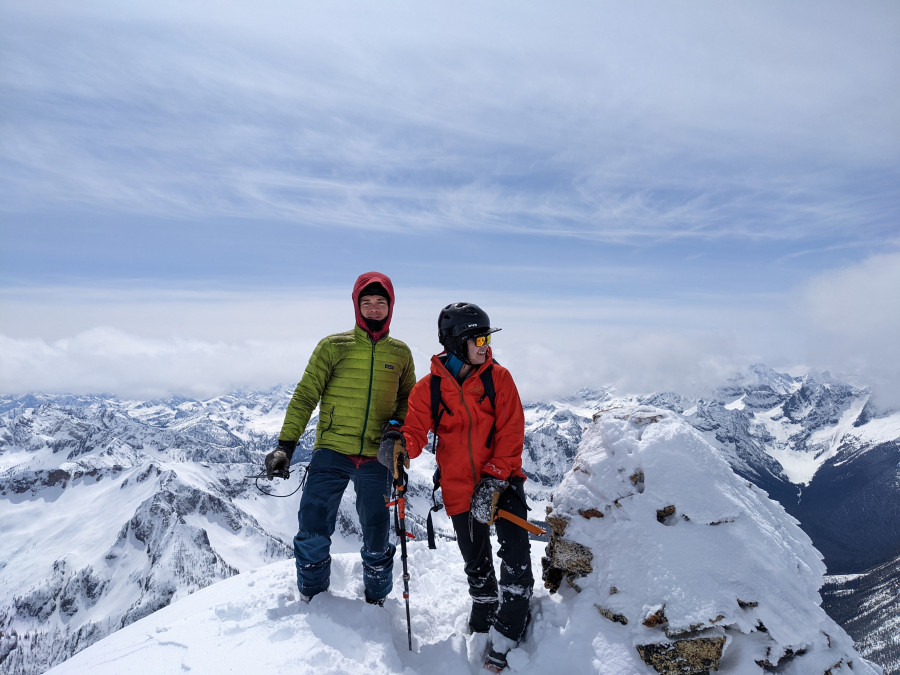 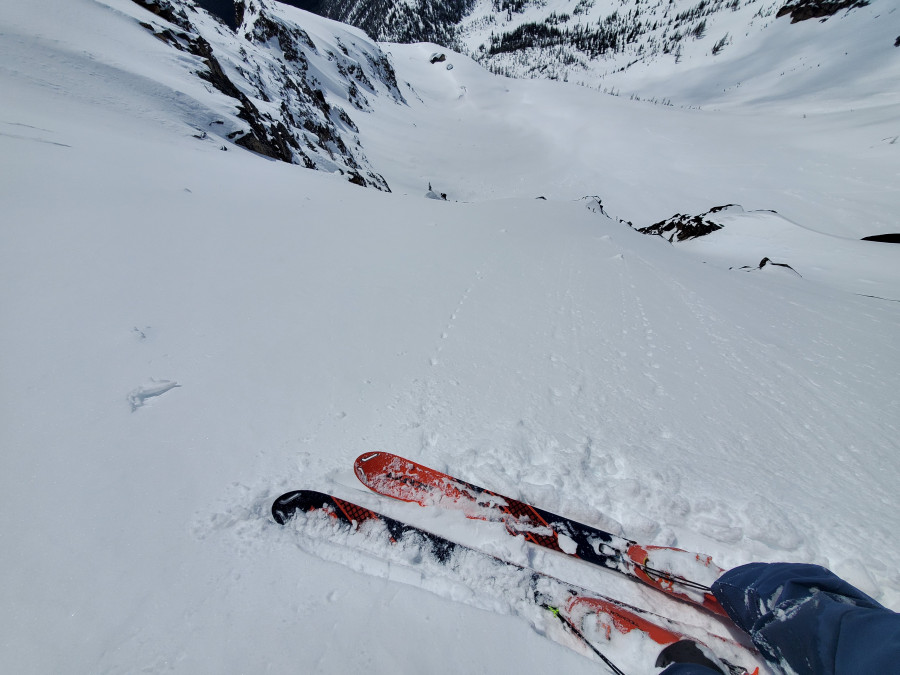 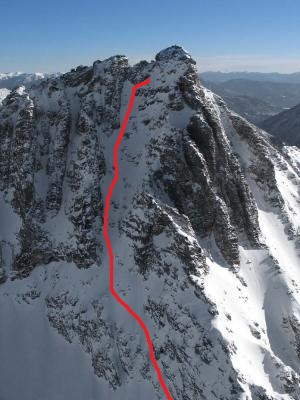 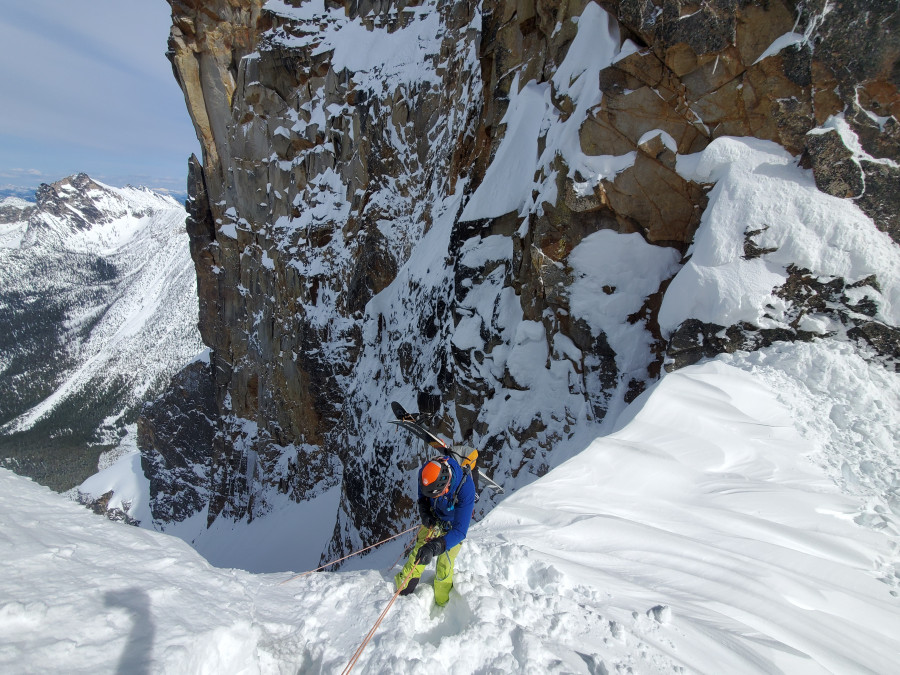 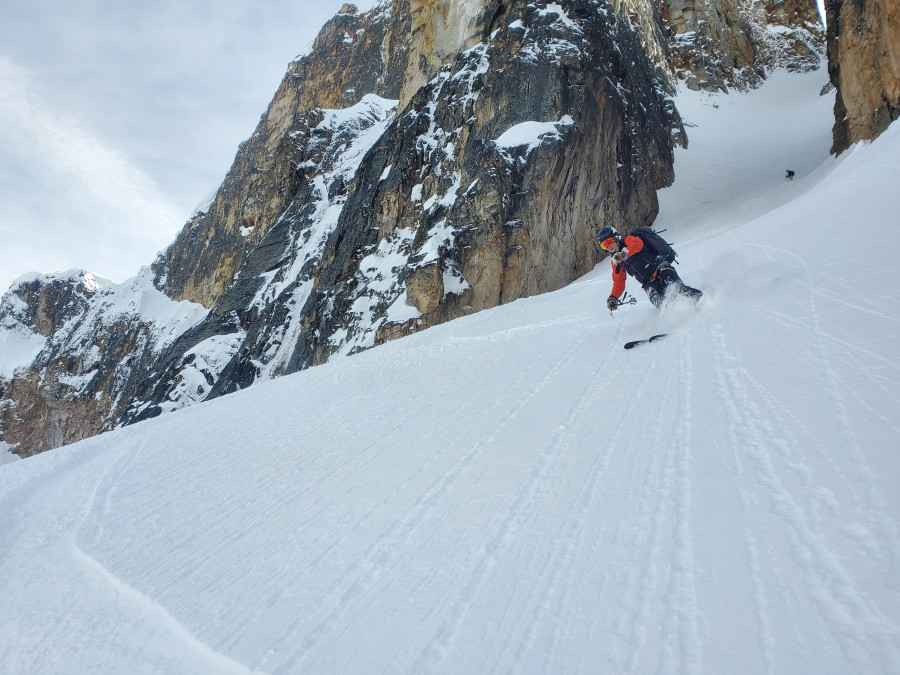 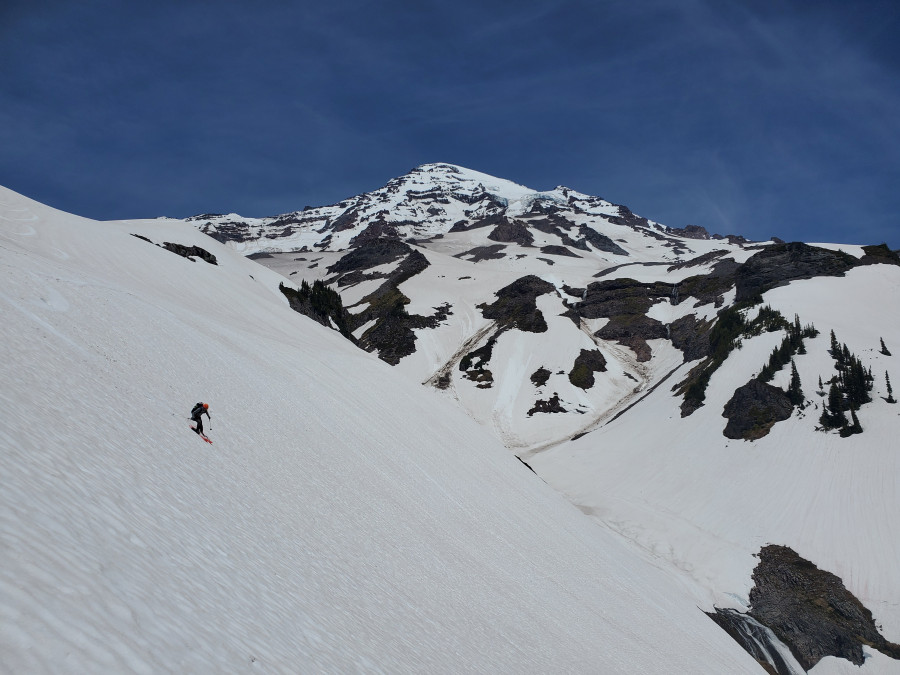 Well done! Did you find that unstable layer to have healed by now? 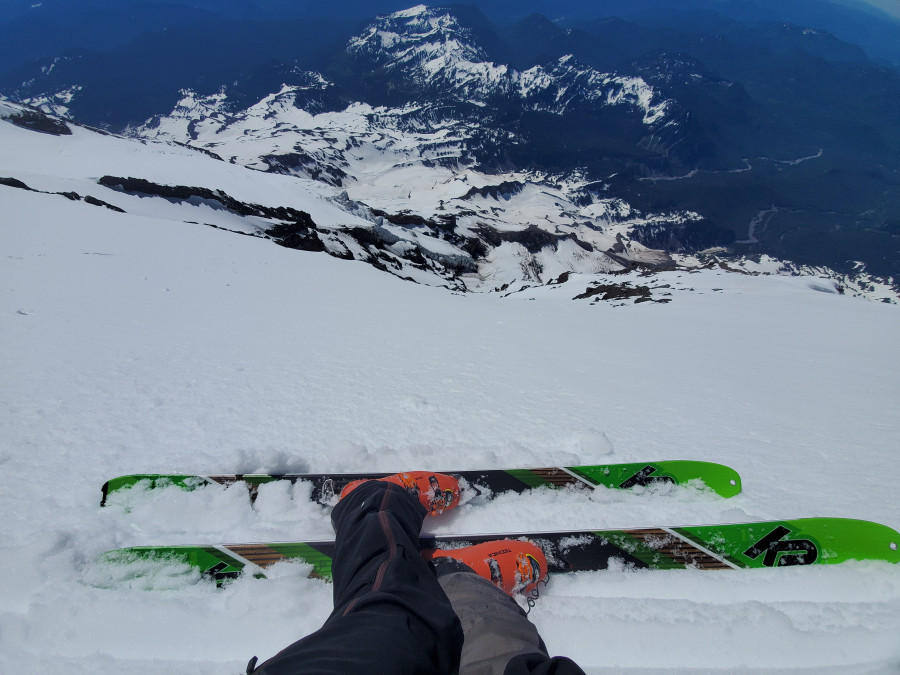 MuradN, I assume that layer was caused by rain penetrating the upper snowpack, since we only found it between 9-10K which was basically the freezing level during the most recent storm. A couple days of freeze/thaw should consolidate everything, as long as it gets cold enough to freeze overnight at that elevation (it didn´t during the night we were there).

Very nice! I was wondering if this would still go. Looks like you guys nailed it with the conditions.

AR with a Jordan-esque coming out of retirement!

Nice one!👍Thanks for the conditions report.👊

Another cool descent! Gotta get on Tahoma this season