The double-edged sword of our historically cool and high-precipitation spring this year has been that while skiing the local low-elevation slopes along the i90 corridor remains incredibly accessible, the bigger objectives have remained just beyond my very amateur grasp. Eventually, I gave up hope of finding a bluebird day and decided that low wind and only mild cloudiness on the 12th was "good enough" and set off for Timberline the evening of the 11th with a borrowed ultralight ice axe and crampons that I'd tried on once. Had a restless sleep in the car listening the blustery wind and fat raindrops, wondering why I choose this as a hobby.

Got started at around 3AM and began skinning up the well-marked cat track east of the Timberline groomed terrain on very sloppy water-saturated snow. At the top of Palmer the snow turned firm and quickly into bulletproof crust, with ski crampons required from there up to the final approach to Devils Kitchen. After a foggy and rainy night, seeing the summit of Hood emerge from the gloom to a glorious sunrise, casting a shadow hundreds of miles south on low clouds was incredibly motivating, and also an affirmation of the old saying "Red Sky in Morning, Sailors Take Warning"

Switched to booting in crampons just below Devils Kitchen (note: this was the first time I'd ever used crampons or an ice axe) and gained the Hogsback around 6AM, catching up with a few parties of climbers who'd taken the traditional midnight start. As the slope hit 40 degrees I became less confident in my single ice axe, and was about to turn around before traversing to the Pearly Gates, but was offered a spare ice axe by a friendly climber, and that extra point of contact (and 7 obviously far-more-experience people to follow who couldn't ALL be wrong about the route), I decided 600 feet from the summit was no place to quit with plenty of gas in the tank.

For a first "Real Mountaineering" experience, the traverse across to the Pearly Gates and climb up was certainly a way to jump right into the deep end. Visibility diminished, and light snow began to fall as we tediously picked our way under the serac, carefully wedging toe points and axes into the slope, ever-cognizant of the long fall on skating-rink-firm snow. Reached the summit at 7.40 in accelerating winds and zero visibility, where I promptly abandoned the idea of skiing the Old Chute, followed by abandoning the idea of skiing from the ledge under the Pearly Gates. Downclimbed through intermittent ice debris flowing out of the Pearly Gates chute, which was a good reminder of why I prefer to descend things on skis.

Strapped in at the flat part of the Hogsback, warmly thanked the new friends I met for the encouragement and expertise needed to summit, and followed a GPS arrow through the disorienting fog on on extremely chattery snow down to Palmer, where visibility improved and a much-anticipated corduroy track down the resort that transitioned to perfect fast spring corn had me back in the parking lot by 9AM- just in time for the legendary Timberline Breakfast Buffet. I will be plotting a return to harvest the corn next year.

Buffet: 10/10, the $25 is a bargain for big slabs of ham, scrambled eggs, pastries, and homemade biscuits. Best way to celebrate a successful climb 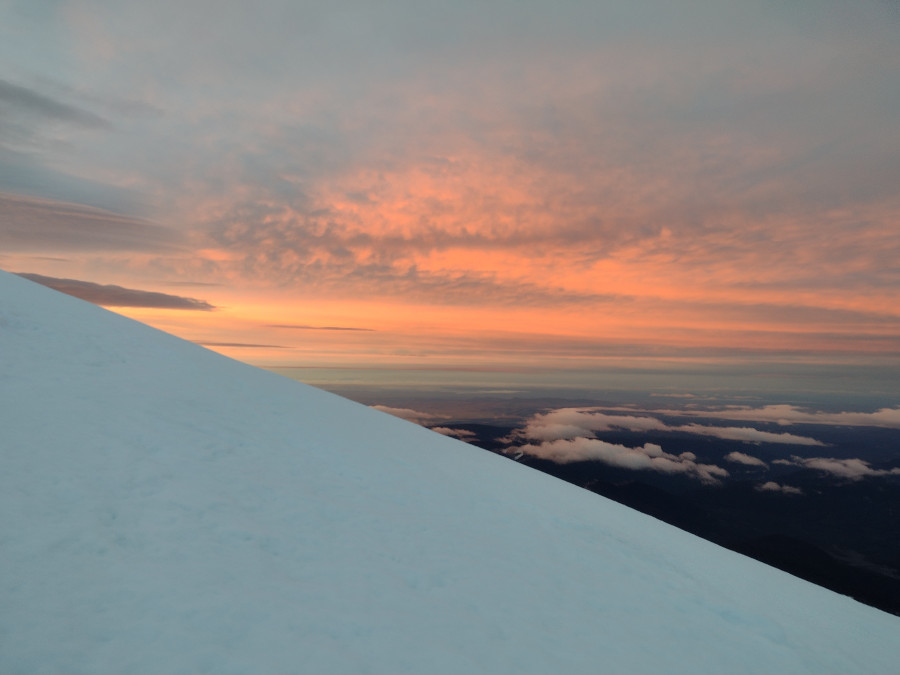 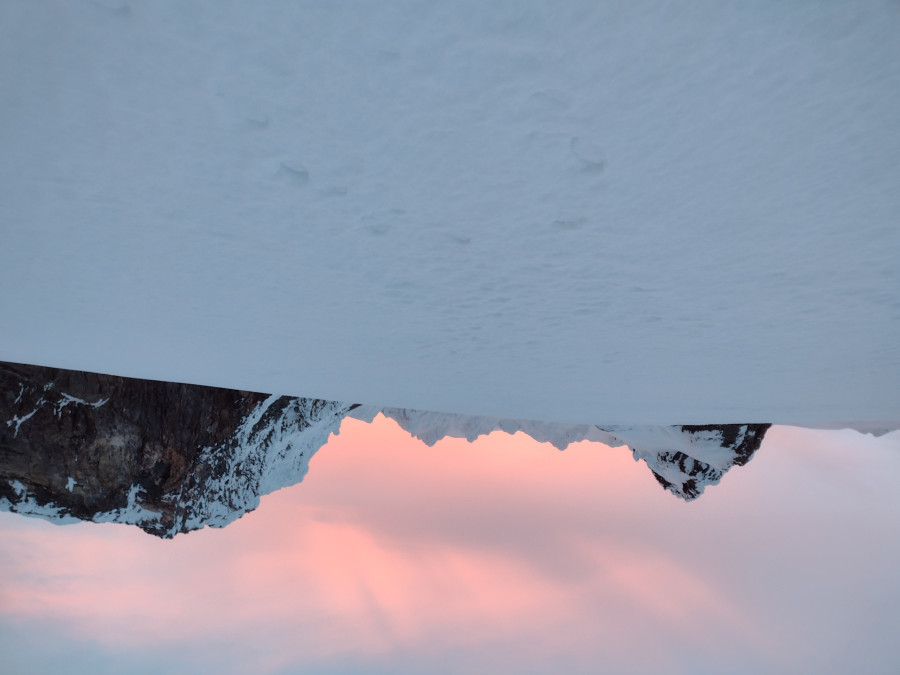 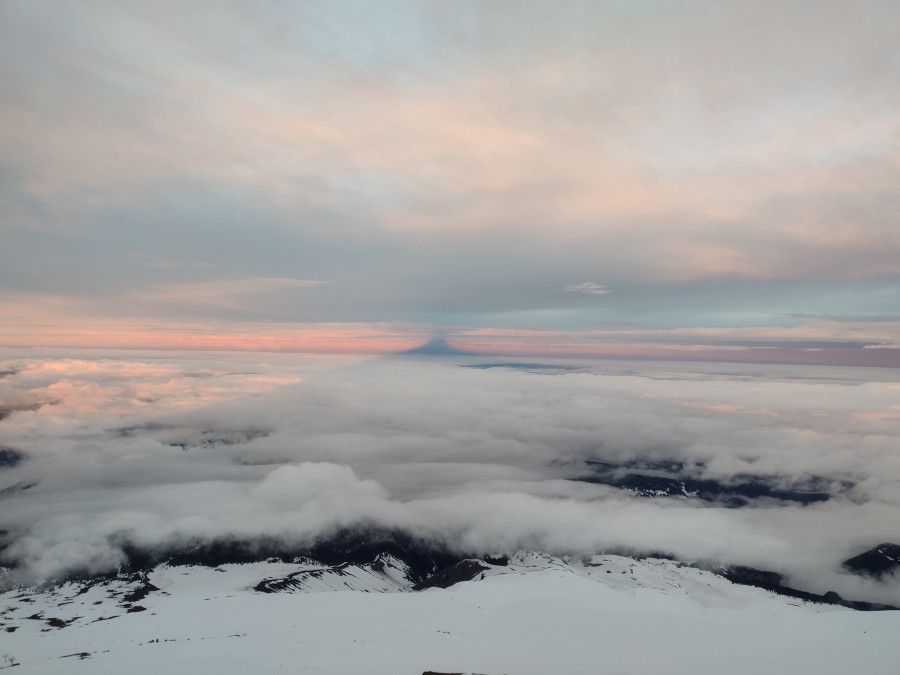 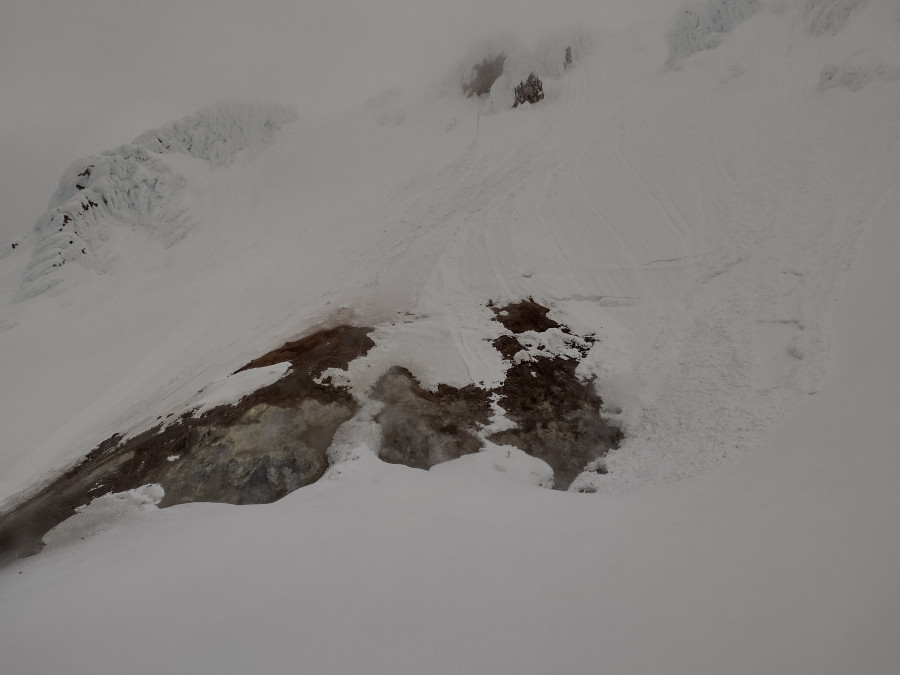 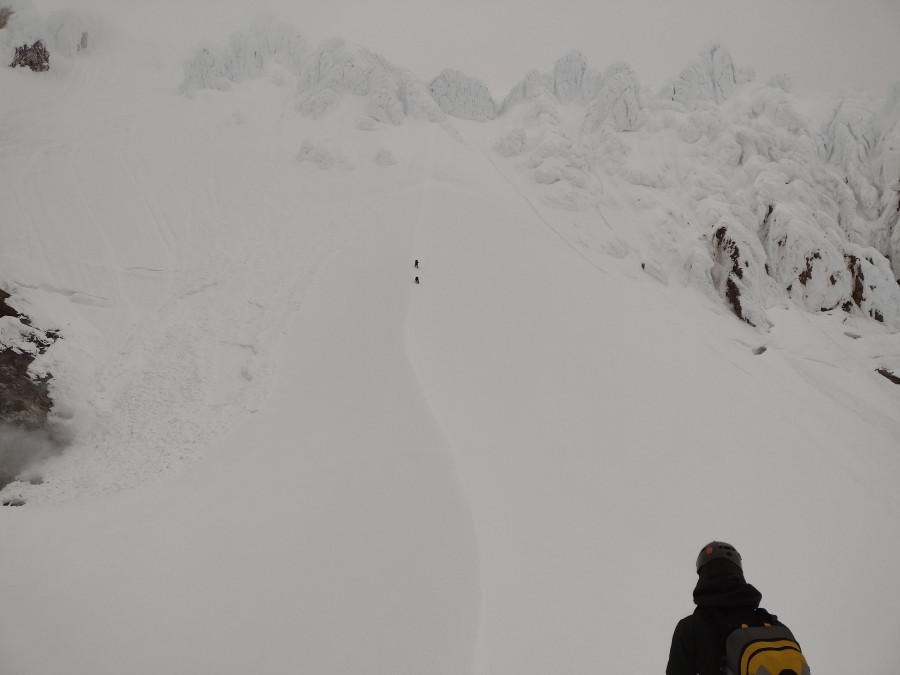 Before you do something on steep snow again, please practice how to self arrest on a small, steep slope with a good runout.  First without crampons, then with.  It is also a good idea to practice crampon techniques on a safe slope too- it is pretty easy to screw up in that middle ground between French and frontpointing.  That particular slope on Hood (your last photo) has killed and maimed many with your experience level, in the exact conditions that you found it.  Just because others are going up doesn't mean it is safe.....for you.

OK.... my old mountain rescue guy rant is over....glad you had a safe and inspiring trip!