Skied the Main, Middle and East summits of Mt. Daniel this week in two days from Fish Lake Rd. with JR, JH and WS.

The Cle Elum Ranger Station kept insisting the road was only clear to just past Fortune Creek. We all convinced ourselves they were wrong and drove up Tuesday evening to find that in fact, they were right; the road was blocked by snow around Silver Creek.

We camped at the car, and the next morning walked the road, making a few creek crossings (Scatter Creek was running about 18” - 2’ deep). From the Tucquala Meadows TH we roughly followed the trail to the SE ridge route of Daniel to a camp at the col between Daniel’s Main and Middle summits.

Day two we skied the Lynch Glacier to the lake first thing, and then re-ascended to camp. We gathered our gear, walked up to the Middle peak and skied NE for a few hundred vertical feet, before traversing E around the divide to climb and ski the E face of the E peak before beginning our exit. From Squaw Lake we were able to ski to within ~400v.f. of the trailhead on black/sketchy/discontinuous/awful snow. Road walk out wasn’t too bad. No bears sighted, but lots of paw prints to wonder at.

Other notes: Lynch Glacier skied great around 8am, but past that hour all aspects/elevations were quite sticky due to dirt and pollen. Some wet-loose avalanche action is still possible, and though cornice fall and glide avalanches seem to be mostly finished, some suspect chunks remain. Didn’t see anyone besides a few other ski tracks from Memorial Day weekend, looked like they had a nice time. 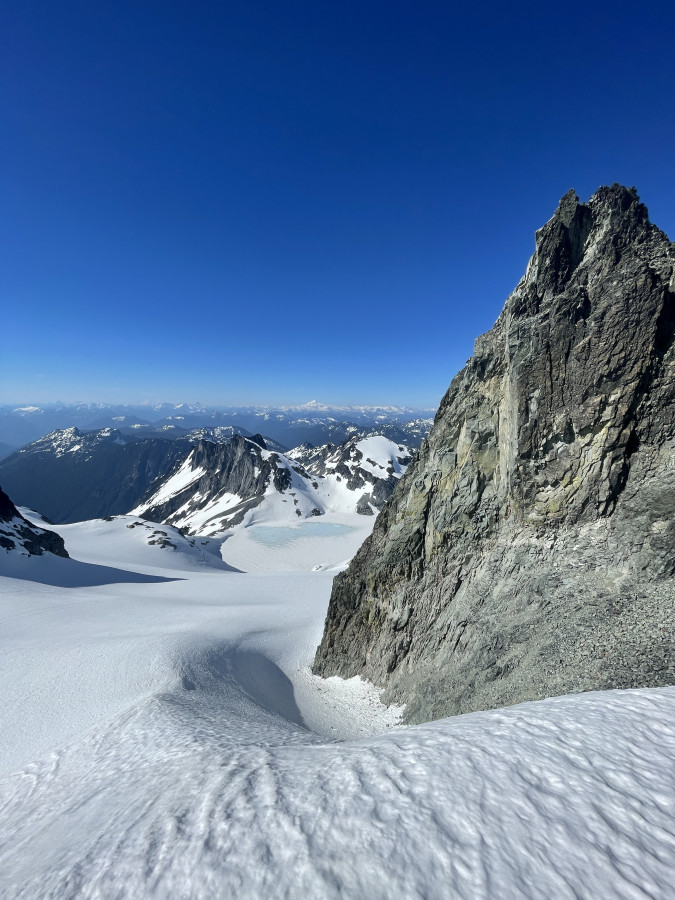 Nice to have all that ambience to yourselves. I bet it was a bumping bivy party. Wish I could have joined!

to get to camp, did you traverse south (following the trail) around east peak?

or did you go up the Daniel Glacier?