We woke up at 5 AM at the Trail Divide camp and drove cars over to Killen Creek. We got started at a leisurely 6 AM and began hiking up the dry Killen Creek trail towards the north ridge. There was snow surprisingly low down, even below the PCT crossing. We didn't start skinning until near the high camp, as the snow was supportable and fast to travel over. We spotted one other party of 4 headed up to ski the NFNWR; 4 others coupled with our group of 6 started to give us a bit of concern with crowding on the face. 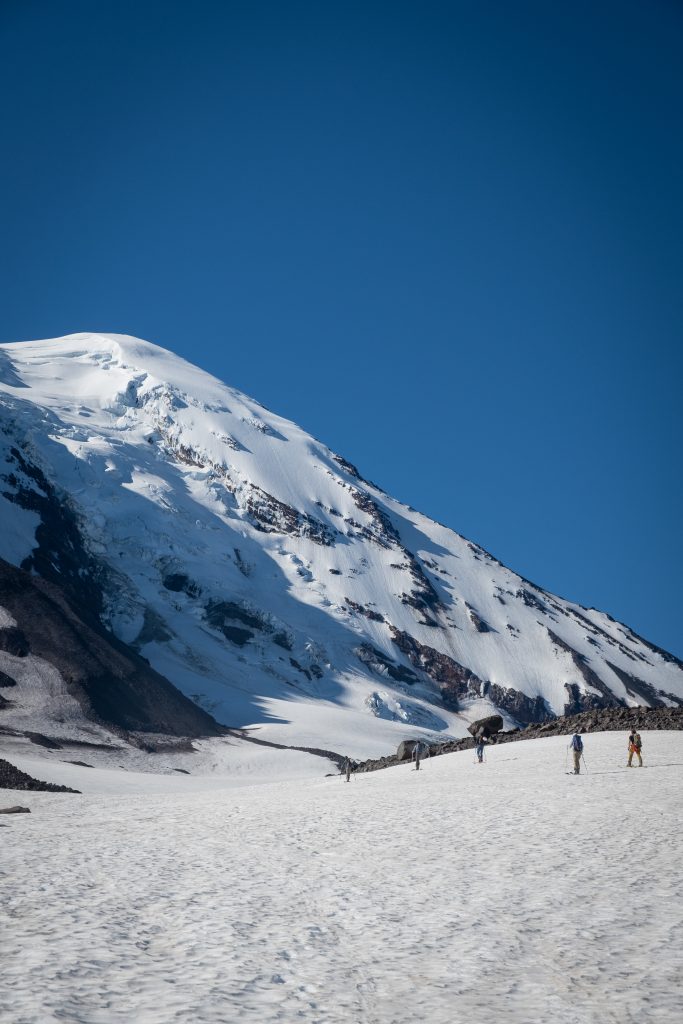 6 homies head out with the NFNWR looming large.

We got a great vantage of the face the entire climb up the north ridge. There seemed to be some weirdness in the rock crux at the bottom of the face, before the cross-over to the Adams Glacier. We couldn't tell how wide they were, and one of them appeared to have a crevasse in it. Hmm... We could see ski tracks below there, but we couldn't tell if the party had down climbed through the rocks or just side slipped. We were concerned about 10 people side-slipping that section down to bare ice...

The north ridge did not go smoothly with 6 people, mostly because we got off-route. Most of the climb up the north ridge stays on climbers' right of the ridge, but we saw footprints (or maybe hoofprints) on climber's left. Our group separated a bit too much in one spot where there was VERY loose rock and we nearly trundled ourselves. We did not do a good job of communicating, nor waiting in safe zones to avoid rockfall. Thankfully nobody was hurt, but it was a poor scene.

Once we crested the ridge and got onto the snow ramp to the false summit things began to go smoothly again. We saw another party of 3 already waiting atop the Pinnacle, presumably waiting for corn on the NFNWR. Uh oh...we began discussing alternatives, primarily skiing west off the Pinnacle to what we 'thought' was the Pinnacle Glacier Headwall (turns out what we were envisioning is the west ridge?).

Nick, Anthony, and I made a dash for the true summit while Nick, Anthony, and John went over to the Pinnacle. We met back up atop the Pinnacle around 1 PM and chatted with the large group atop. The first group of 3 had booted down on the NFNWR earlier and said it wasn't quite ready. It seemed they were going to drop around 130/2 PM. Our group opted to bail to the west ridge off Pinnacle. We didn't want to be stuck behind 7 people skiing the line, waiting for corn. We felt a bit bummed we wouldn't be able to give the line a shot, but we were still stoked on the line ahead of us. We knew we'd have a longer exit cost than skiing the NFNWR but we had packed enough food to carry us through the day. 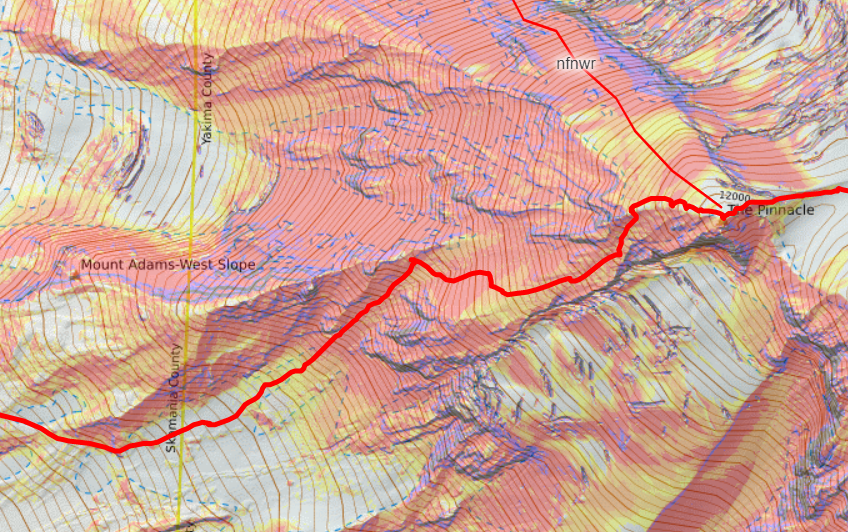 A snapshot of our line.

We skied down the ridge from the top of the Pinnacle and peered over skier's left to the entrance to the west ridge. It looked SWEET! Super wide open, smooth, and steep enough to keep things interesting! I went first to get photos of everyone ripping corn! 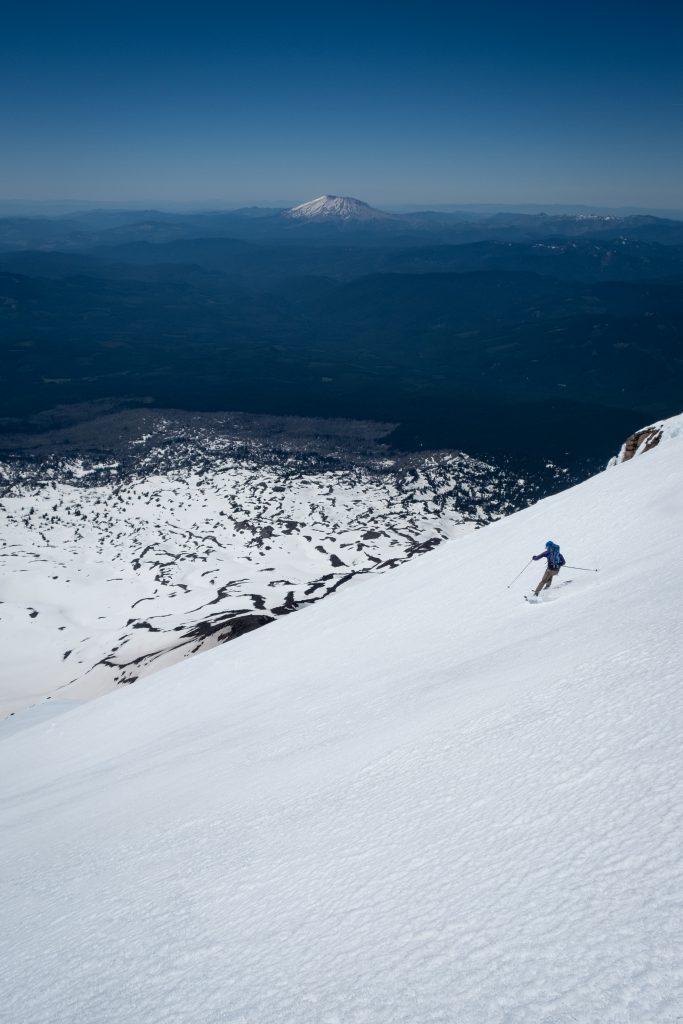 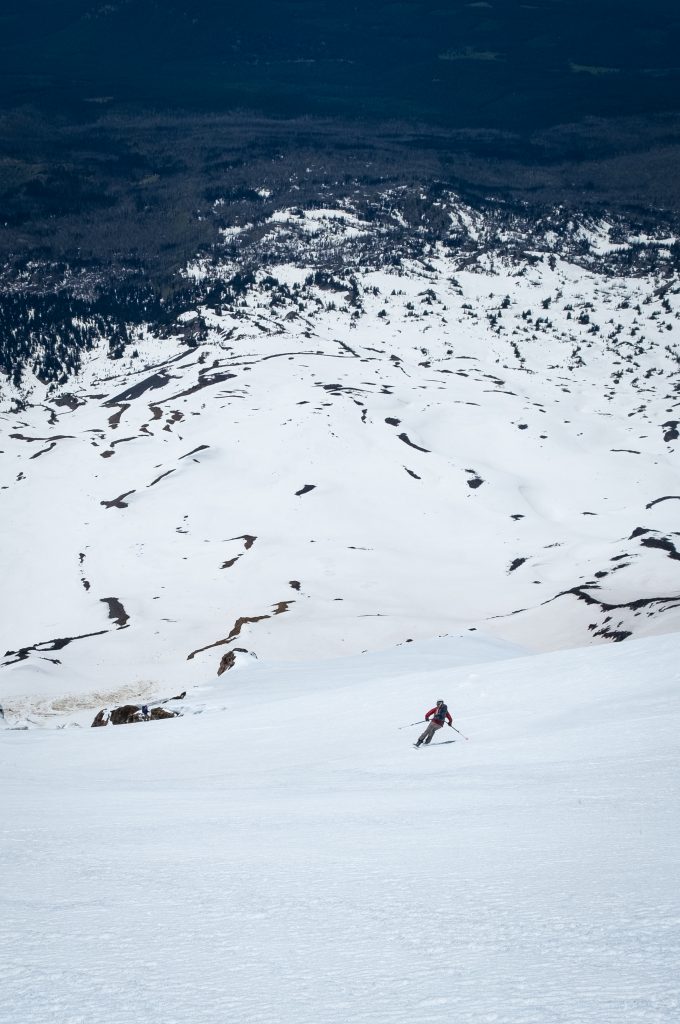 The line just kept on going! We skied down skier's right to where the west ridge crosses over to the Pinnacle Glacier Headwall, but opeted to go skier's left at that point and continue down the west ridge. The headwall had a large bergschrund at the bottom and looked quite dirty, according to John who peered over. The snow got sticker as we went down but was still quite fun, even with 6 people skiing and sluffing off wet slides. It was great fall line, 40 degree skiing for thousands of feet, with no crevasses to deal with. 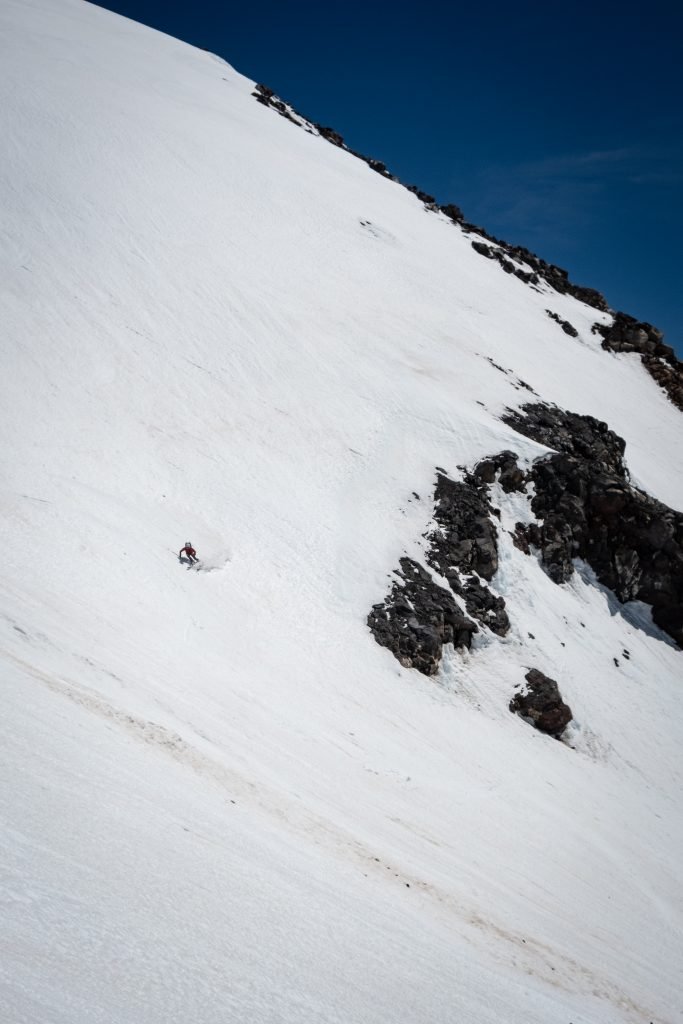 Once at the bottom, we realized we had a LONG way to traverse to get back to the Killen Creek exit. Enter a long, hot, sweaty march across the base of Pahto. We got a first row seat to watching a splitboarder descend the NFNWR. The rock crux, according to him, was 'crampon-ice' that he downclimbed with two tools. Umm...I'll pass. We met back up with the first group that had dropped the line at high camp and they too said the rock section was sporty. They reported pretty good snow up high and mank down low. Exiting was mosquito hell...relentless buggers that bit us as we transitioned to trail runners for the hike out. Overall, the skiing was awesome, the climb was terrible, and the experience was enjoyable filled with laughter and homies.

Looks sweet -- glad you fellas enjoyed the descent. I was one of the three waiting for the NFNWR to soften. My buddies said it was in the worst shape they'd skied it, but still we had some kind of fun. Those turns up high were exhilarating, but yeah, the icy crux and trappy mank lower down made for a bittersweet experience.

All to say, it's just as well you missed it this time, scored a carefree descent, and can come back later for a better run. Impressed by your crew's consecutive ticks on the southern volcanos!

Nice! We did almost the same thing the day before (Sunday): NFNWR was icy, we decided to ski the Pinnacle Glacier headwall, but the snow on the west ridge looked waaaay better, so we skied that. Perfect corn all the way down, such a fun run! Honestly it's one of my favorite descents I've done on Adams.

Even with the fat spring snow this year, the receding ice on the NFNWR is quickly destroying the route. I was last there in July 2017, and the rockband was a totally different situation, smooth skiing with no ice shenanigans. The face is less planar and more concave now. Every year's snowpack is different, I guess, but the past 5 years of hot summers has not been kind to that face. Two descents of it in perfect corn is enough for me... after Monday's sphincter-clenching ice-capades, I don't think I need to go back.