A couple buds and I had a fabulous lap down the "Northwest Ramp, as accessed by the NW Couloir via Upper Hanging Glacier" on the Shuk last week. Transit was rapid, with a couple preset skintracks up the WS (side note: whoever set the skintrack hard climber's left right up the main headwall....Perhaps reevaluate your objective hazards and make better decisions in years to come).

I think we were 3:45 car to top of WS. Upper Hanging Glacier is ultra fat right now with zero crevasse issues. This detail will change in the coming weeks.

Give that serac a nice big margin of error. A moderately size icefall came down and made a debris pile within 200-300 feet and blasted us with ice pellets and mist. We skinned right past a couple large house-massed pieces of glacier before jetting in the opposite direction past the corner. Back to my note about that climber's left skintrack that went waay too close to that icefall zone.....You guys...Seriously?

Descent was incredible. This was my second lap on this run and it wasn't 100% hero pow, but super chalky / velvet snow. I had a vision of fully "freeriding" this thing right off the top, but the snow conditions definitely kept us honest in the upper sections of the descent.

The crux traverse this year is in an unusually thin / bad state for some reason. I ran into some major white ice problems as I crossed. I'm regular footed, so I crossed on my toe edge going switch with 2 ice tools. Problem is that you're on a 50 degree slope over a 100 ft cliff above a 3,000 ft. ramp, and you're on rock slabs with 6" sugar shitfuck garbage snow, with a lens of death ice on top of that. My edges would not penetrate for purchase, and when I swung an ice tool it would shatter that ice lens and then bounce off the rock underneath. It was like my ice tools were saying "Nice try, but fuck you, SUCKER!"

I kind of had to do a "4 point fiction hold" on my snowboard, like I was "slab-scootching". Honesty I turned off my helmet cam in case something bad were to happen that mom wouldn't want to see. The worst part is only about 12 feet in length, but be damn careful there. In retrospect cramponing across would have felt safer, but then you're forced with the challenge of transitioning into shred mode on a 50-55 degree wall....And my worst nightmare in life is dropping my splitboard on top of Shuksan. Hard to say what the best strategy would have been actually...

Regardless, the radical thing about this line is that you feel like an astronaut up there. Being on your board that high in the air is THE SICKEST feeling ever. None of us died on the traverse, and when it came time to ride we descended over 3,000 vertical in ~120 seconds. Robot says we hit 54-55mph riding down the 2 walls of the route. Turns out that Alpine Freeride Dreams do occasionally snap into reality.

Best part of riding big lines in #ULTRASEHKSNOW is the uncontrollable giggling that ensues at the bottom. Oh, and also, Parking Lot Coronas after ultra-triumphant success are the fucking BEST.

Its strange....These radical descents always leave me feeling sort of depressed for about a week after. Kinda similar to tripping on Molly all weekend, I think they zap your brain's fun chemicals for a while. Ski / shred mountaineering really is the best form of partying.

Photos definitely not in order of the day's timeline... 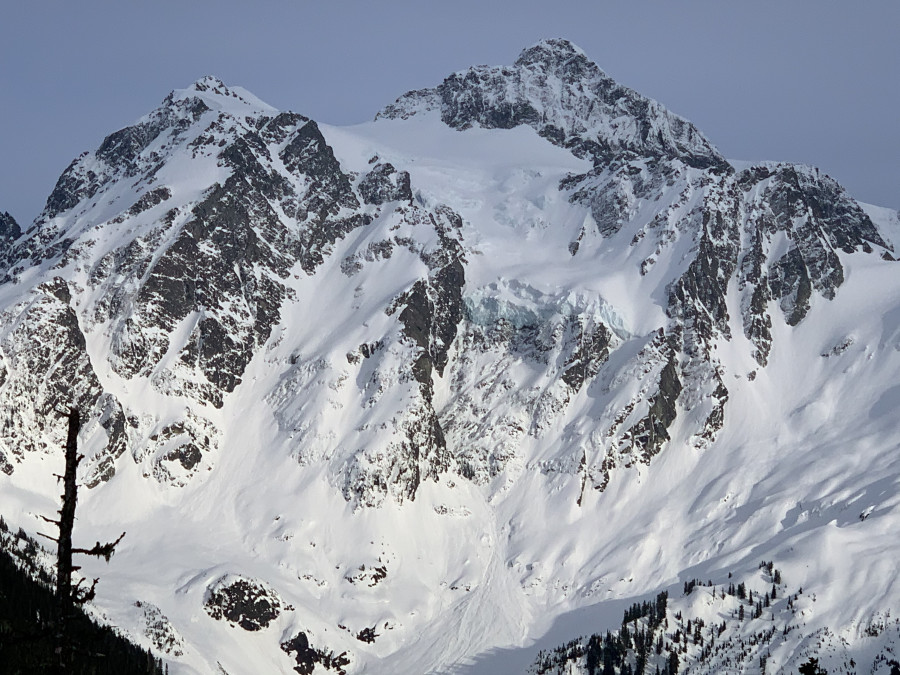 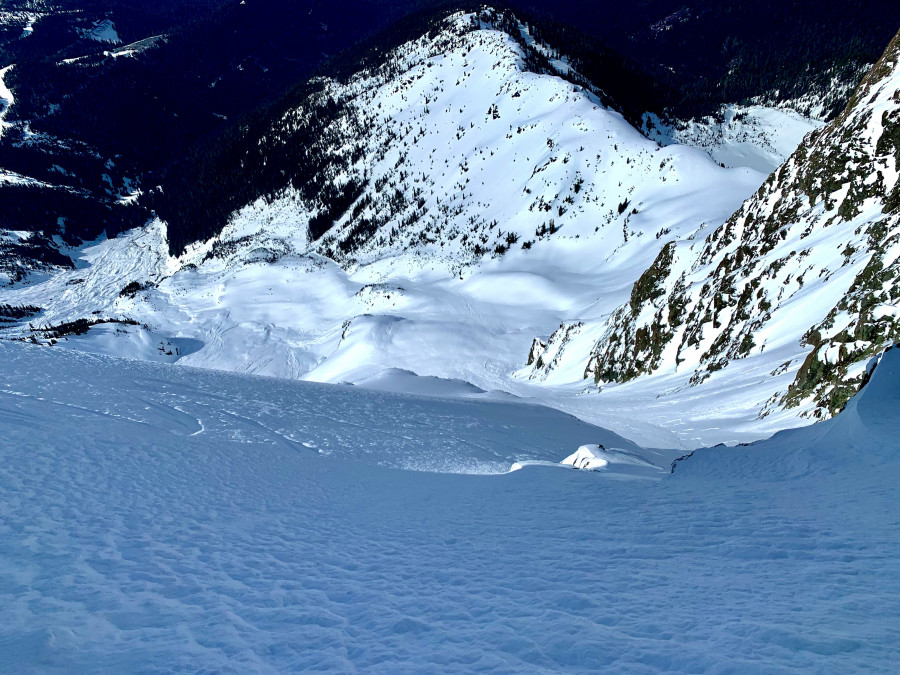 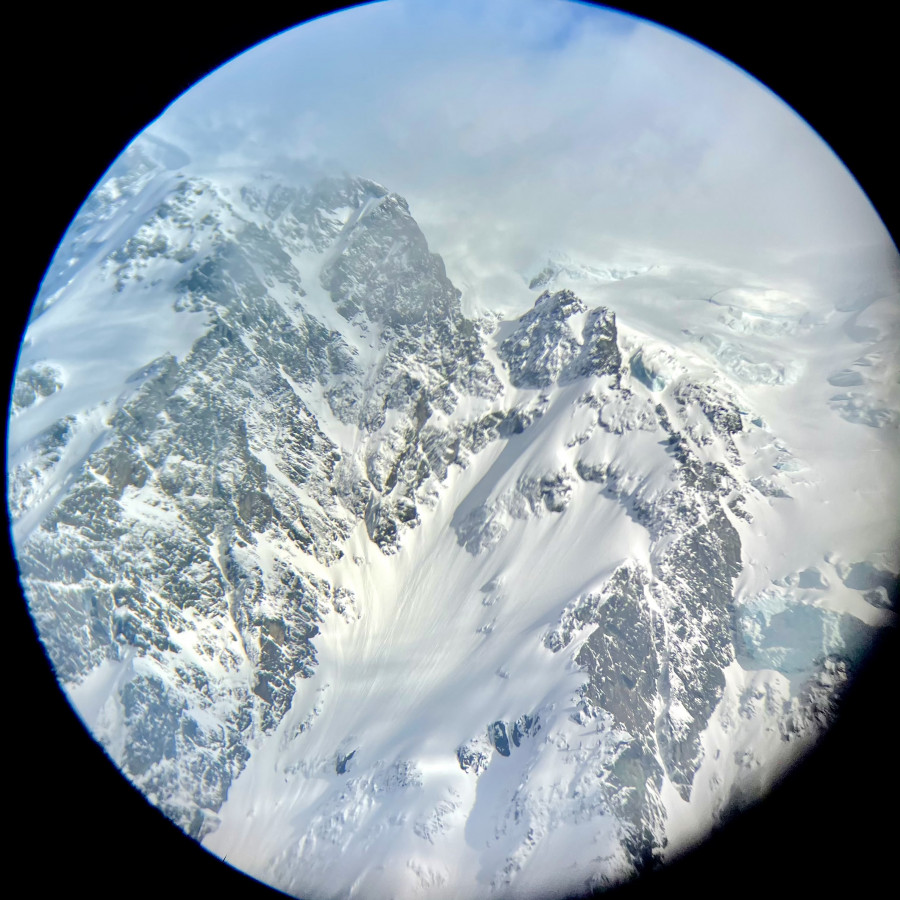 Risk assessment in the mountains is an inexact science.

Great report, Russman, with a nice psa value. Glad you guys scratched past the ice to the hero snow. I'll be trying to avoid that white ice and explore other runs this year!

Loved the write up - especially the argument with ice tools and the shitfuck snow. Not dying is always good, buts its also interesting how “not dying” - but maybe almost - is such a part of all types of high angled adventures. The edge really does fuel some of our trips - but like Kamtron - I’m not looking for that 12’ section of white ice above a death fall anymore. With age, the amount of risk needed for full on fun has mercifully declined...Anyone for a long traverse of a beautiful, sunny range this weekend?

Nice report and shots, was out mid march and traverse was pretty crusty then as well. I agree that steep skiing is one of the finest drugs, and i love getting zapped. Maybe time to check out HG...

Back in the day, it was thought to be essential to climb any seriously steep line you intend to ski. That doesn't seem to be the practice on the NW Couloir of Shuksan, but it sounds like it might have saved some intense moments this time.

Lowell, that is certainly the smarter way to go...

In regards to Lowell's comment, considering how quickly someone can ascend the WSG and drop in on you climbing NWC, climbing the descent route in some cases poses a potentially more likely risk.

That's a good point and actually an interesting discussion point as it pertains to the NWC in particular. There are other routes that I would not descend without climbing, such as the North Face, as that route is nearly always wind hammered. I've actually climbed the NWC in the past and at the time deemed that particular route safer to drop from the top for a couple reasons:

1) Muradh makes a good point that on the NWC there is a risk of someone skiing onto you from above.

2) There's actually a lot of dropping snow and ice chunks from the cliffs above you on climber's right.

3) Its exposed, so if an avalanche did come down from above there's essentially zero protection / places of refuge.

4) This route is pretty easily assessed from a "top down" approach. Sort of put on the heli guide glasses for a second, and it becomes apparent that there are clear "check points" on this route. If for example the upper rollover is firm in any way, or if there is a question of hollowness / suspicion of wind slab, then the couloir is totally off limits. If the couloir is firm in any way, or has slab questions, then the traverse and wall are off limits. So its like keep going until a stop sign appears. There is for sure the hazard of making it through the upper section, couloir, and traverse, but then to ski onto a huge panel on the main wall that is ready to rip loose. But generally, I'm never on this thing unless its had at least 72 hours of healing with a good historical background before that.

I think the real crux is making the decision to attempt the traverse from the "pocket" in the lower section of the couloir proper. That's always the tough question. Sometimes its visually clear that the traverse is terrible, so the math problem is easy and you retreat. Historically, in all my failures on this route I've learned that the traverse is generally good to go if the couloir holds stable shallow / well-aged powder. This year seems different though. I believe that because we've had a persistently cold winter, the snowpack hasn't been allowed to really build on the traverse, which then creates that melt / freeze next to exposed rocks. I also could have cramponed accross and probably transitioned on the wall without too much hassle, but again, transitioning on steep walls SUUUUCKS.

Climbing it first would offer the advantage of knowing exactly what you're getting into, but I still feel there are variables that this approach exposes the climber to. Either way, Martin Volken's Risk Matrix automatically would put the NWC at a 6 due to 5/5 on the consequence scale. So whatever strategy one takes, routes like this one require an acceptance of unknowable dangers / probabilities, which unfortunately is what makes this stuff feel like partying.