Best wife and I had planned a multi-day ski tour from Pole Creek to Camp Lake, up and down Middle Sister (south ridge) then ski around it.  We got part way until the harbingers came true….

Sunday, May 9;  Parked at Pole Creek TH.  Decided we didn’t know how long we would have to walk in ski boots with a full kit so opted to carry in the skis, skins, boots, axes, and crampons to the snow line.  We hiked 3 miles - .8 miles from the Soap Creek crossing.  The hiking is not great due to a lot of blow down. We stashed the gear and hiked back out to our van.

Monday, May 10;  casual start. Left at 8:45a.   Hiked with the full kit (sans skis, boots, etc) to our stash.  Hid the hiking shoes and clicked in to our skis.  Easy and continuous skinning to Camp Lake.  Only people there.  As we were pulling in to camp, we saw a large shadow cast over us but we didn’t actually see the large bird….#2 Harbinger.

Tuesday, May 11; another casual start at 8:45a.  We clicked in to our skis to climb the nearest east facing ridge to get on the South face/ridge of Middle.  Just as we were pulling out, a large Raven swooped down and landed 20’ away from us.  We thought….ha…you can’t find our food…we hid it.

We skinned, ski cramponed then boot cramponed up the South face until we were eventually on the south ridge. Terrific snow for cramponing – not too hard or soft.  There’s one narrow scary section (at least for us) but it was fine.  At the top we met an impressive local couple (her first Middle summit), two ski patrollers from Utah and two guys from Tahoe. All super people.  The Utah guyz had a dog named Dorothy who ate my sandwich when I wasn’t looking…..#3 Harbinger.  No big deal, Charlotte was a nice dog and we had plenty of food at the camp, right?

We skied down and around and had nice spring turns all the way back to Camp Lake – a little sticky at the bottom. As we pulled in to camp, our snow kitchen had turned in to a total mess with everything scattered everywhere….clearly the Raven had struck.  We then checked our ‘hidden’ food stuff sacks that were totally ransacked.  Here’s the Raven’s dietary haul – 8 extra soft flour tortillas, 3/4 lbs of Parrano cheese, ¾ stick of butter and he sampled just about everything else.   (note; Best wife calls the Raven a HE because ‘no lady Raven would act like that….’). The Raven did not eat two Freeze-dried dinners and, I guess, totally missed the 4 homemade oatmeal walnut cookies – thank goodness.  How much can a Raven actually eat?

We then decided we would have to ski out the following morning.  There are worse things to have happened.....

Oh yea, the 4th Harbinger was actually the 1# Harbinger – in 2006 a Raven tore in to our food cache while we climbed the same ridge from the same camping area during the July 4th weekend.  Could it have been the same Raven or a son or grandson?  The World Wide Web says Ravens can live up to 20+ years.

Wednesday, May 12; we had an uneventful pleasant ski and hike out. Oh yea, just as we were clicking in to our skis, the Raven swooped in and landed about 20’ away from us, again.  Sorry Raven, no more food. You got it all. 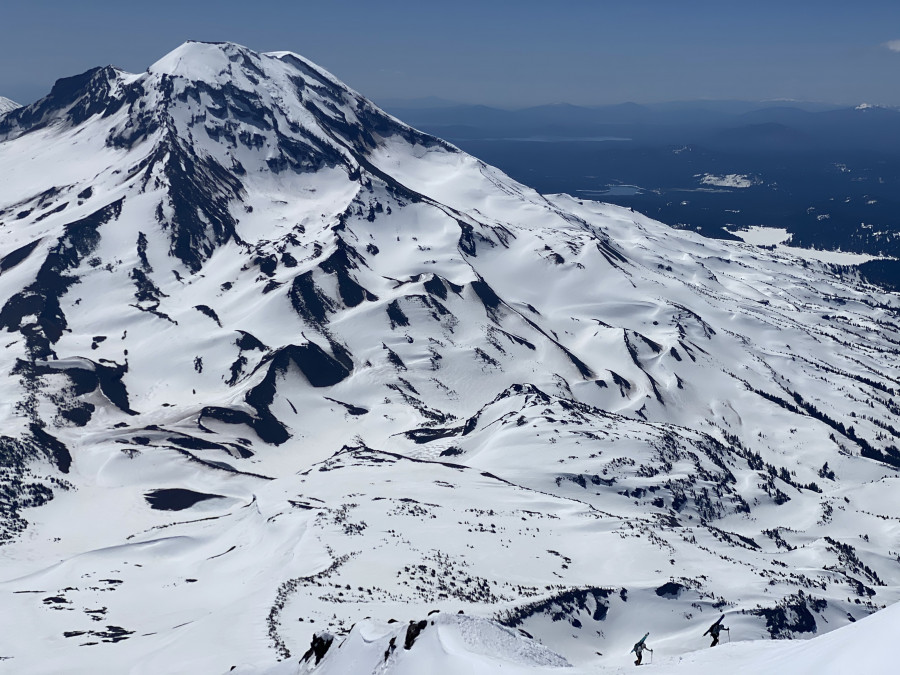 Hey! I just had a raven or ravens demolish what I thought was a well-stashed food supply in the teanaway. They dug a double bagged supply out of my sleeping bag. Thankfully didn’t destroy my bag. Took 12 bars, a whole avocado (including pit), 3 huge sandwiches, a package of homemade freeze dried bananas, toothpaste. Couldn’t believe it! Props to those smart birds.

Corvids are the smartest of the birds. You won't make that mistake again!

I like these sacks for raven and bear deterrence https://ursack.com/ in a less bulky package