5/8/19
956
2
Posted by voyageur on 5/9/19 3:06pm
Wednesday I decided to take another shot at trying a route I'd dreamed up recently, skiing from Goat Mountain to Hannegan Pass off of FR32. I made an attempt last week, but was stymied by poor visibility.

Given the forecast was once again "partly cloudy" I didn't have 100% confidence in whether things would pan out, but at least I had a chance to do a little more route research, and had received some beta from dberdinka about a possible crux section around Mamie Peak.


I arrived at the Goat Mtn trailhead around 8am after self-shuttling my car to the Hannegan Pass trailhead and biking back down. Unlike last week, this time I even remembered to bring my skins.

I hiked the trail up and found consistent snow a few hundred yards further along the trail than last Friday. Skis on, I climbed up Goat West in significantly soggier snow than last week - not surprising given no freeze had occurred overnight. I scrambled to the summit then dropped in to the cirque between the two peaks, skiing soggy, nasty wet snow. I skinned and then booted up to the East peak before taking a break to dry out my boots and liners, which had become wet sponges in the saturated snow.

Dropping off of Goat East, I followed the ridge east a ways to a cornice-free spot, where I dropped into the Silesia Creek drainage. The avy exposure here was quite large with all cornices still intact, and lots of recent debris from natural wet slides. Navigating this section was the crux and most dangerous portion of the day. I traversed north and east to try to maintain elevation and reach the West Fork of Silesia as high as possible. Nevertheless, I ended up around 3800' due to exposed slide alder and other terrain restrictions. About 45 mins of fighting my way through a snow-free treed zone was rewarded with continuous snow again around 4200' and a wonderful treed meadow with a lazy stream and huge boulders. I stopped for another break to dry out my liners and socks and fill up on water.

(side note: while the Dynafit PDG boots I was using were wonderfully light and very comfy, the lack of a sealed gaiter was a huge issue in the saturated snow. I literally poured water out the last time I took them off. Lesson learned.)

After the break, I skinned up the valley toward Mt Chardonnay, passing below Mamie Peak and some of the sketchier parts of the ridge in the process. I did scout a potential skiable slope that may be used if one wanted to try skiing the ridge further east from Goat East before dropping into the Silesia Creek valley. Additionally, I noted later a set goat tracks that had appeared to traverse the ridge in its entirely. That said, given I was solo and seeing this area for the first time, I was glad I'd adjusted my route based on dberdinka's information.

The climb out of the valley and up Chardonnay was slushy but I had some fortuitously timed cloud cover and a light north wind, which spared me a much less pleasant experience. I was able to skin the east ridge of Chardonnay to within a few vertical feet of its summit, noting in the process some natural wet slides that had stepped down a foot or two on its east face.

Skiing down, I did a small ski cut to get the upper layer off, and this stepped down to the now obvious crust layer the natural slides had slid down. The resulting crown was between 1'-2'. The snow slid slowly a hundred yards or so to a flatter section and stopped. Skiing the crust down and back to the ridge was a welcome change from the heavy sludge I'd skied most of the day.

At this point it was already 6:30 and I still had another 4 miles of ridge to navigate before I reached Hannegan Pass (perhaps too optimistically, I had hoped to climb Ruth as well, but this was now out due to time considerations). I had assumed from the topos and photographs that my pace on this section should pick up. Thankfully, this was generally true. There were still a few good climbs (Granite Mountain and Hannegan Peak), but there were not any significant terrain obstacles. I found myself at the Pass around 8:45 and did some adventure skiing down the trail at dusk, before changing into trail runners and trodding the last 2 miles back to my car. I arrived around 10:30, making a 14.5 hour day. I hustled down to the Goat Mtn trailhead, where there's cell service, and gave my wife a call as I hadn't told her the whole scope of my plans for the day. She said that she was thinking she'd call SAR in about 15 mins (11pm) if she hadn't heard from me. Phew!


Total distance was 23 miles, with about 3 of that on the bike, and 5 hiking. Overall elevation gain was just over 10k. I saw a lot of goat and bear tracks, but no other signs of human visitation until I got to Hannegan Pass, and didn't see anybody the entire day.
Caltopo map of route


I don't foresee this becoming a popular tour due to other more accessible options, but it does get one to some pretty neat terrain and is an easy traverse logistically. In winter, it could probably be cut short by skiing some south-facing couloirs back down to FR32 if one wanted to skip the ridge ski to Hannegan Pass. One could also traverse over from Twin Lakes via Bear Mtn instead of climbing Goat from FR32, though that would make the car logistics a little more involved.


Photos:
1. looking down the ridge (east) from Goat Mtn west peak. The valley on the left is the W Fork Silesia Creek drainage, which is where went
2. looking back at Chardonnay and the ridge to its east, with Larrabee and Tomyhoi in the distance. I believe I took this from Granite Mtn
3. looking east from Chardonnay toward Hannegan Pass, with Ruth in the distance

Current area beta:
-FR32 is now drivable all the way to the washout just before the campground.
-The Hannegan Pass trail is a mix of dry trail, crawling over thin avy debris covering creeks, and skiable snow. If you plan to ski Ruth, probably best to drop into the bottom of the valley where there is more snow.
-Larrabee's S face appears to be still skiable from the summit.  I could see Twin Lakes Rd was snow free as far as the Yellow Aster trailhead, though the FS says the road has snow well before that... not sure what to make of it. 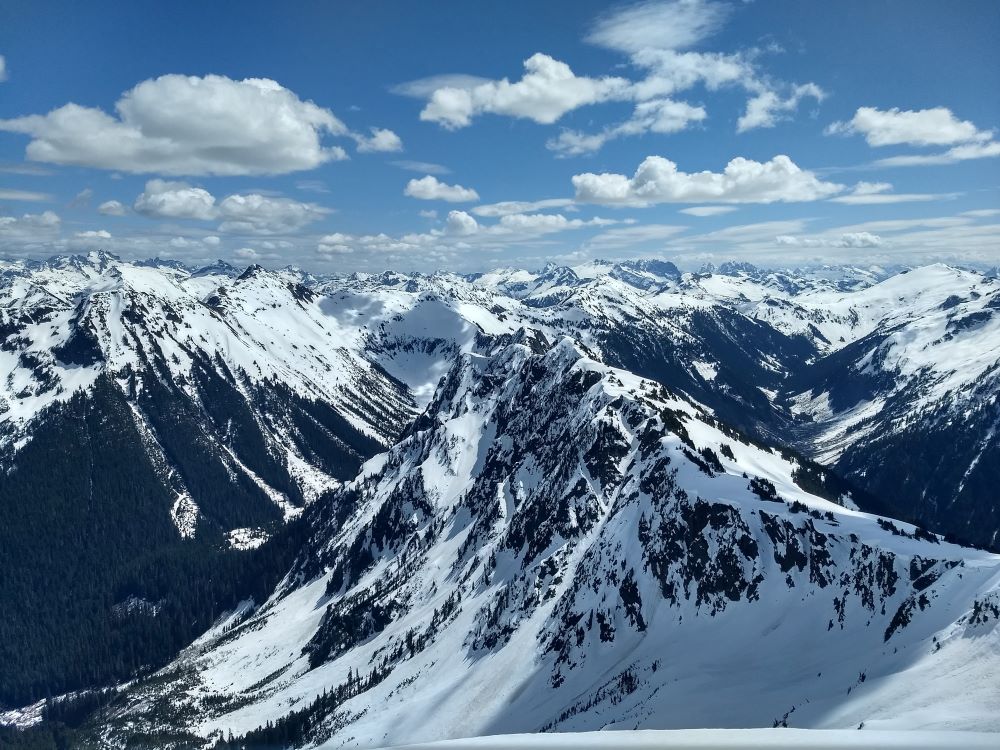 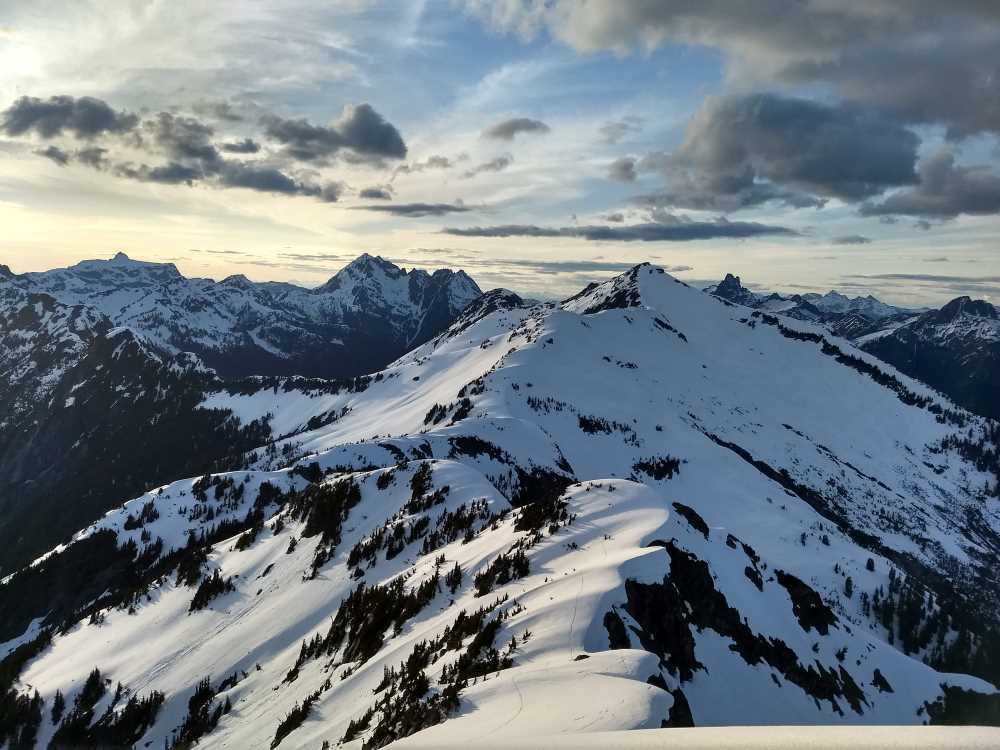 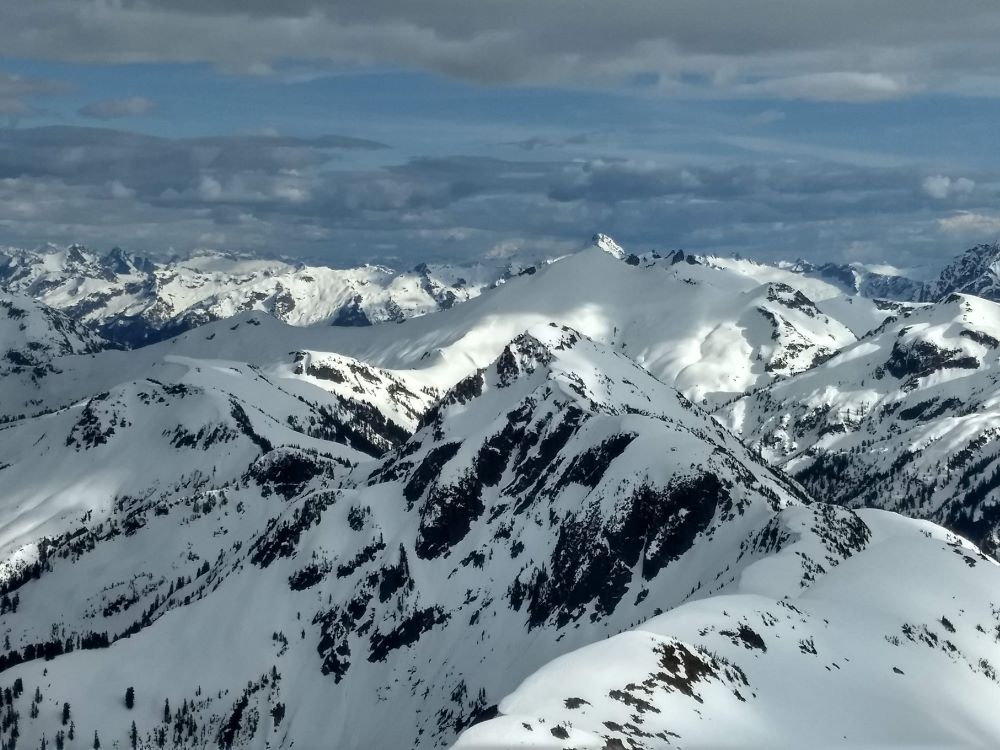