5/2/19
WA Cascades NW (Mt Baker)
1749
6
Posted by aaasen on 5/5/19 1:05pm
Nate and I spent the last four days skiing the Forbidden Tour into the Isolation Traverse as a farewell to the Cascades before Nate leaves to work in Ethiopia for a year. Conditions on the Forbidden Tour are degrading quickly and I feel that the prime window has already closed. The Isolation Traverse is in good condition and should last for a while.

Slept at the Eldorado TH where Cascade River Road is gated as of 5/5. Woke up to clouds and a light drizzle. A bear walked through the parking lot as we ate breakfast. Walked up to Boston Basin on the summer trail and started skinning around 4,200'. Worked our way across the Quien Sabe in a complete white out as it snowed lightly. By the time we made it to Sharkfin Col the clouds had lifted just enough for us to scope a path across the Boston Glacier. I rappeled in and found over a foot of fresh wind-drifted powder. About 25m into the rappel I fell into a bergschrund thinly covered by new snow. Fortunately I was on rappel and climbed out easily. The low visibility routefinding was too involved for us to let loose and enjoy the powder.

The crossing onto the Forbidden Glacier was well filled in. We skied a direct line to Moraine Lake down the snout of the Forbidden Glacier on perfect corn - probably the best run of the trip. The cliff band at the bottom of the cirque was barely filled in and required a little hop into avalanche debris. This isn't somewhere you want to hang out as it's a funnel for icefall from the Forbidden Glacier. I wouldn't recommend this line. The skier's right line through the trees looked pretty melted out as well.

It was windy and lightly raining/snowing when we reached Moraine Lake. We hadn't brought any shelter so we crawled into a moat and dug a cramped snow cave. We bridged the gap between snow and rock with our skis and covered it with blocks of snow to keep the rain off. The night was warm but by morning we were drenched.

We started the morning with a quick skate across Moraine Lake. This won't be a safe option for long if this hot weather keeps up. Climbed up the Inspiration Glacier through the clouds and broke out into the sea of peaks above. Climbed the E ridge of Eldorado and had an awesome descent down the NE face on wind-affected powder. Skinned over to Tepeh Towers Col and found a ridge of flat dry rocks. We basked in the afternoon sun and let our gear dry, stoked that the weather had turned for the better.

We decided not to build a snow cave out of laziness and opted for an open bivy in the middle of an 8,000' col instead. Fortunately the night was warm and calm.

Skied smooth ice down the McAllister Glacier and then skinned to the northernmost col. Climbed steep snow with a couple fun rock and ice moves to the ridge and rappeled onto the other side. The descent down Backbone Ridge was spectacular. Ice-elation couloir had some avalanche debris and head-over-heels mush. Frustrating slush skinning over to Isolation Peak with a nice steep descent down the E ridge.

Found a sweet boulder just N of the lake and slept out in the open. Winds were ripping over the peaks but it was calm where we were.

Woke up early and made the exposed traverse to the Neve Glacier. Talked to a party of three who had just descended the NW face of Snowfield. They said it was snow all the way to the summit so I decided to climb it (without my skis). Nate had unfortunately lost his ice axe somewhere during the descent of Eldorado so he patiently waited on the glacier. The climb was fast and enjoyable on snow up to 55-60 degrees but the descent was slow and mentally taxing.

Skiing down the Neve Glacier was fast and carefree. The Colonial Glacier was nice on top but grabby by the bottom. It was only 10:30am or so, but it was HOT. A large loose wet slide had covered the climber's track from the previous morning across the traverse to Pyramid Peak. We worked our way across the deep mushy snow as fast as we could, concerned about the many cornices threatening us from above. I regretted the detour up Snowfield and wished that we had made the crossing earlier in the morning.

We skied down the ridge to the NE for a while. I was unaware of the climber's trail on the ridge and led us fall line through steep trees. The snow ran out at about 3,800' and we began bushwhacking. Nate claimed it was worse than Whitehorse's Avalanche Gulch and I agree. At least we only had to descend it. We picked up the climber's trail a few hundred feet from Pyramid Lake and followed it to the road. 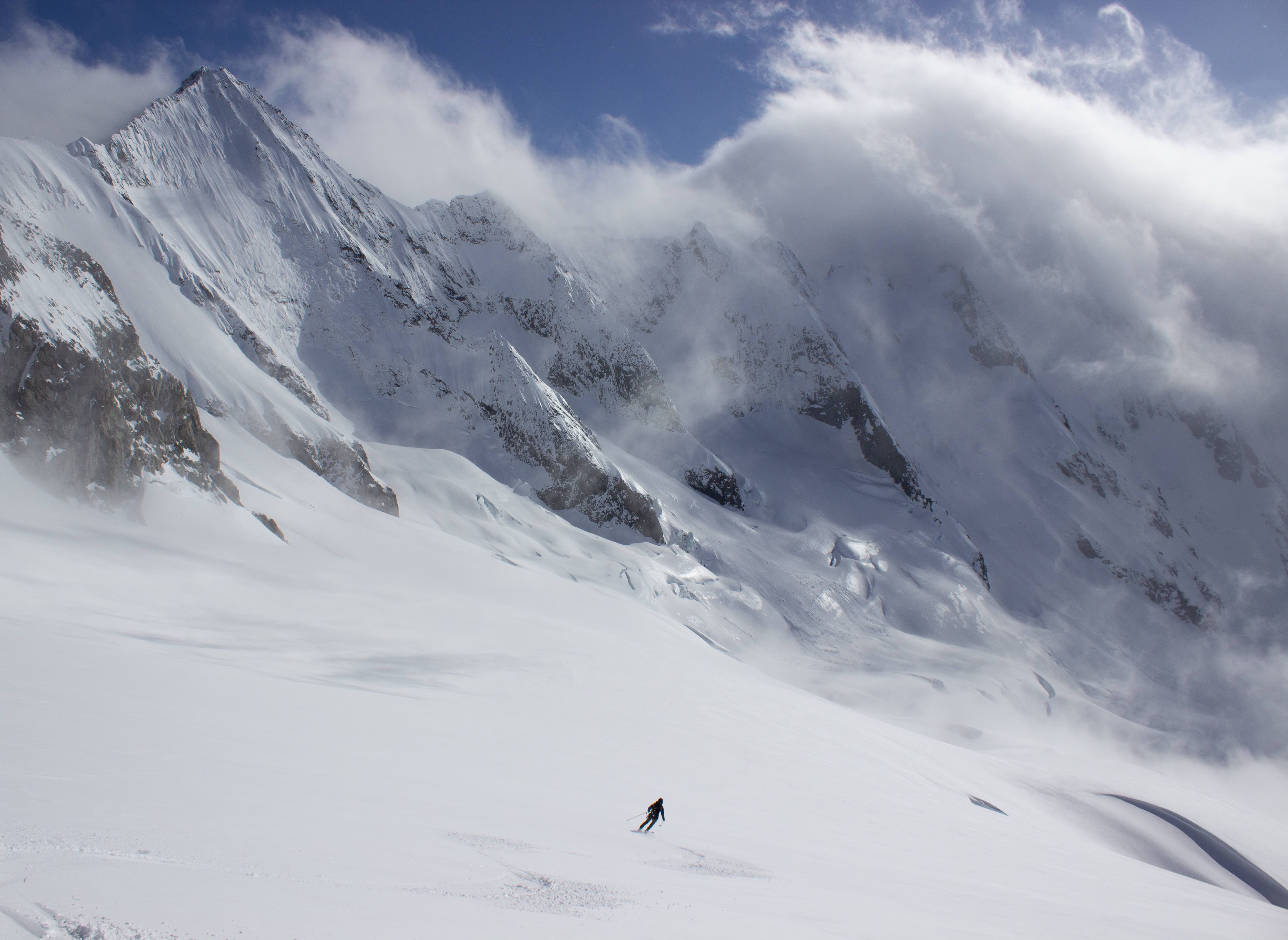 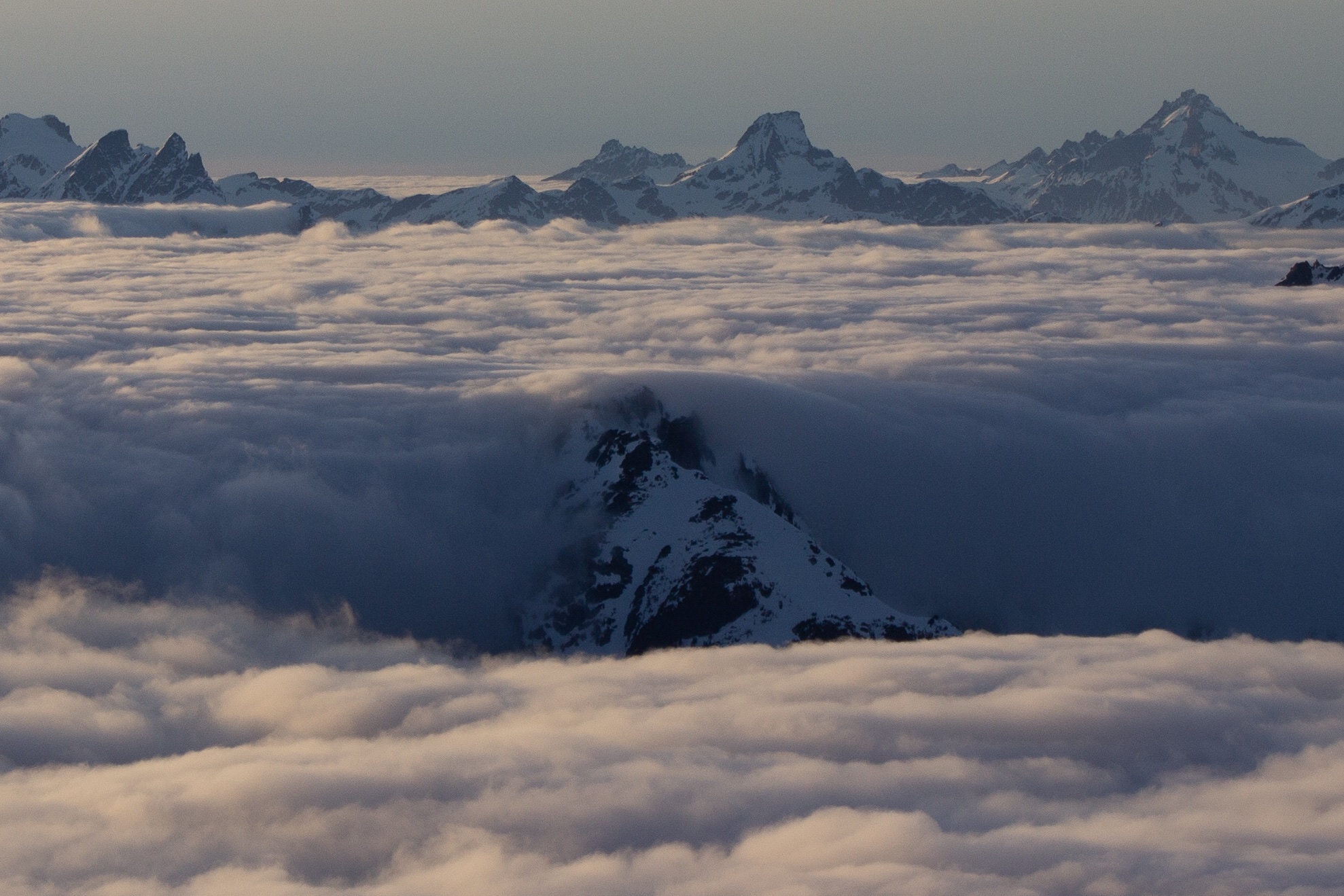 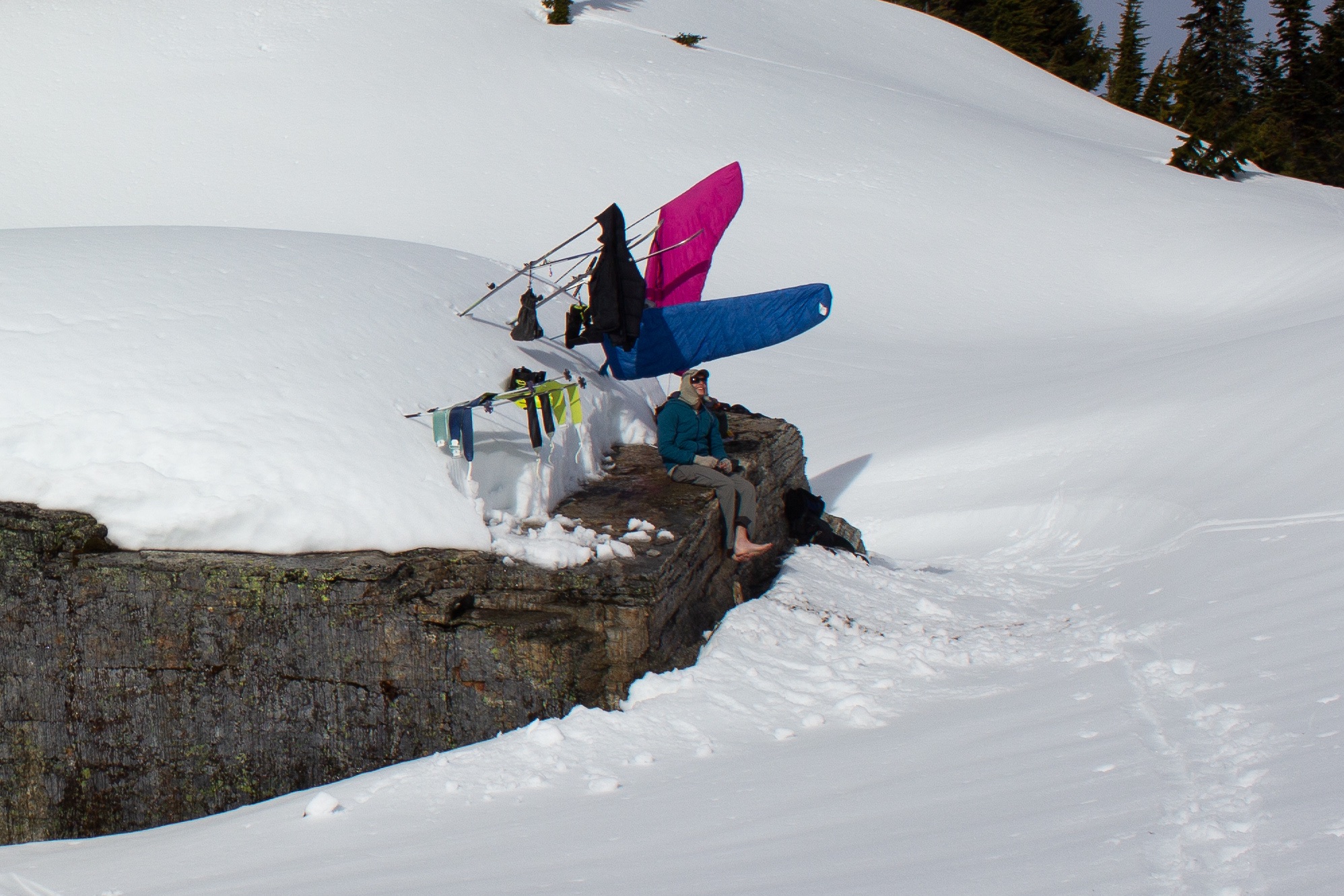 author=Jason4 link=topic=41904.msg165001#msg165001 date=1557157289]
We followed your tracks from Sharkfin Col to Moraine Lake. I figured we were a couple of days behind you based on the condition of the tracks. It made for easier route finding. Way to push it into the Isolation Traverse as well!

Thanks! Glad our tracks were useful. 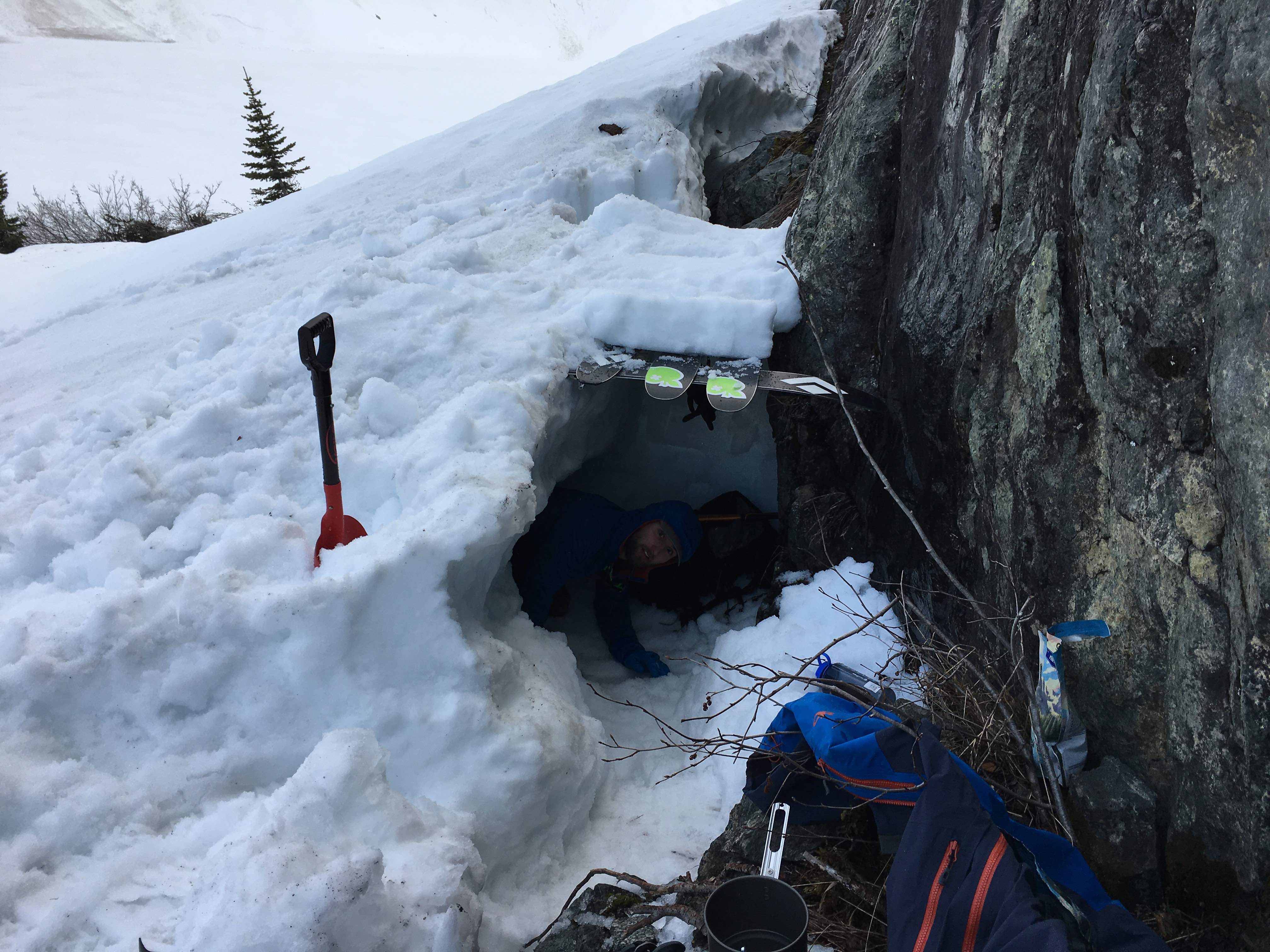 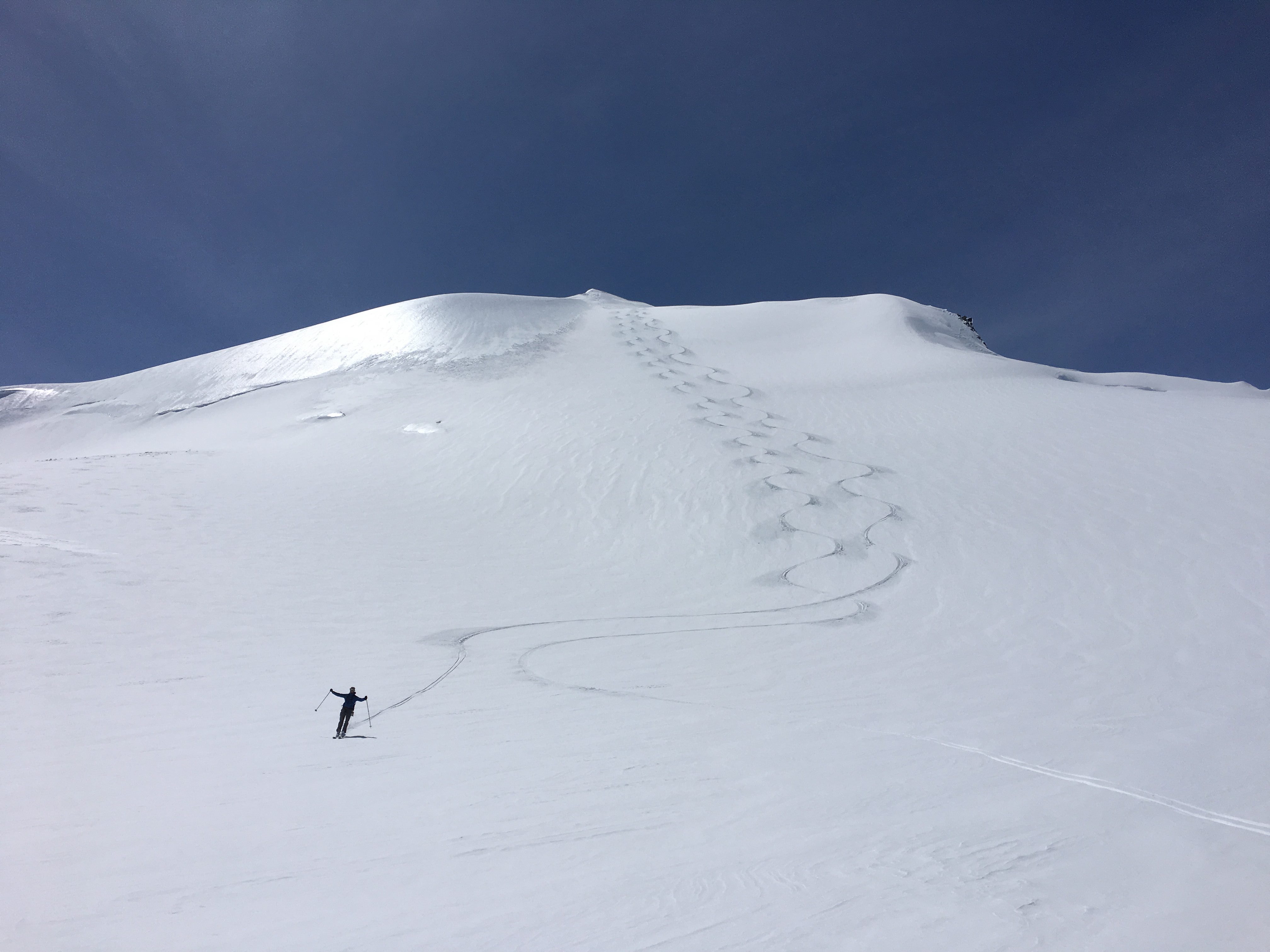 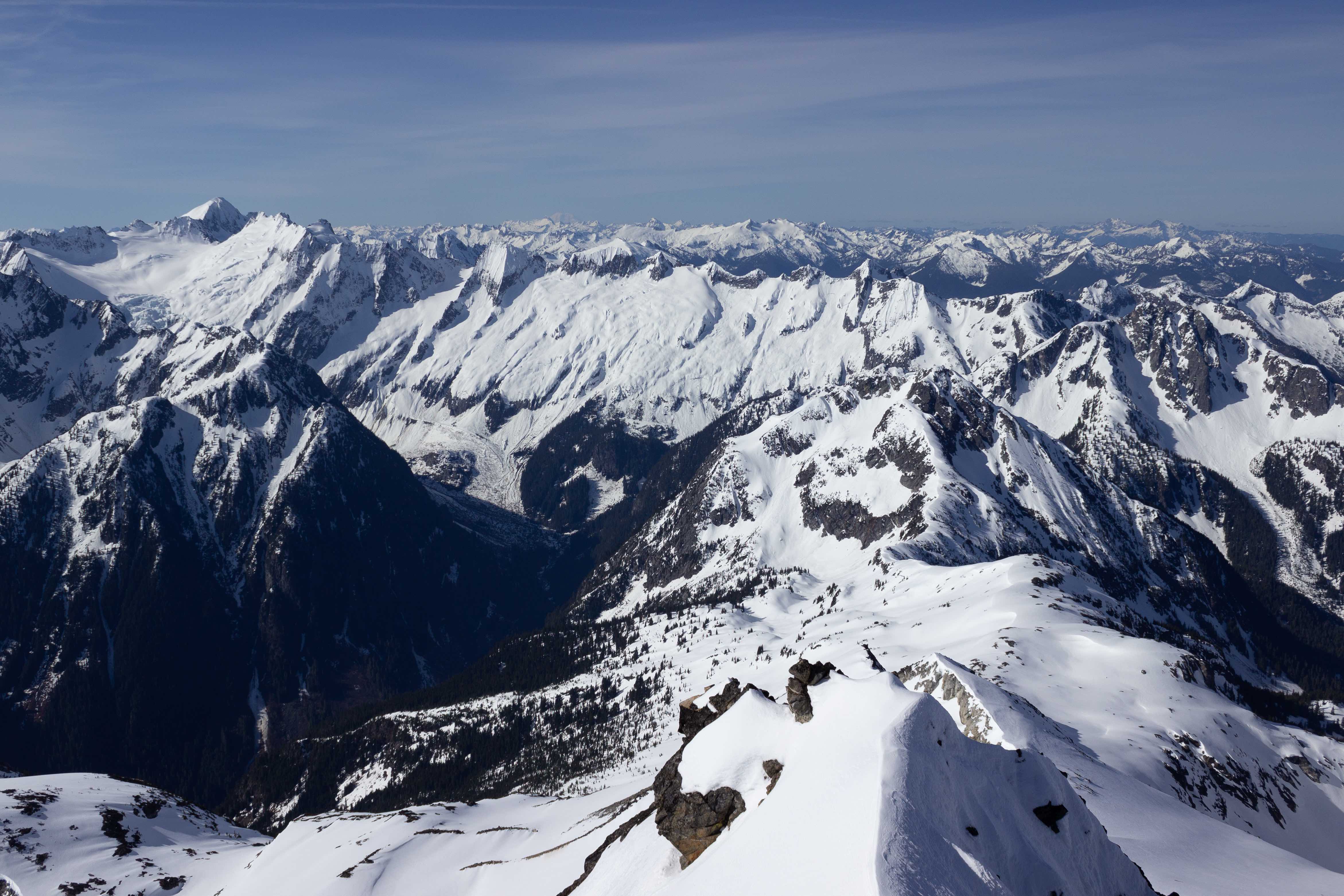