3/31/19
1171
5
Posted by hedonaut on 4/1/19 1:06pm
Took advantage of the weekend's forecast to access some turns and solitude. Some of you would likely enjoy our chosen line and others in the area. We hiked to Pyramid Lake and a bit higher to begin skinning at around 3200'. Spectacular views once emerging from the trees. 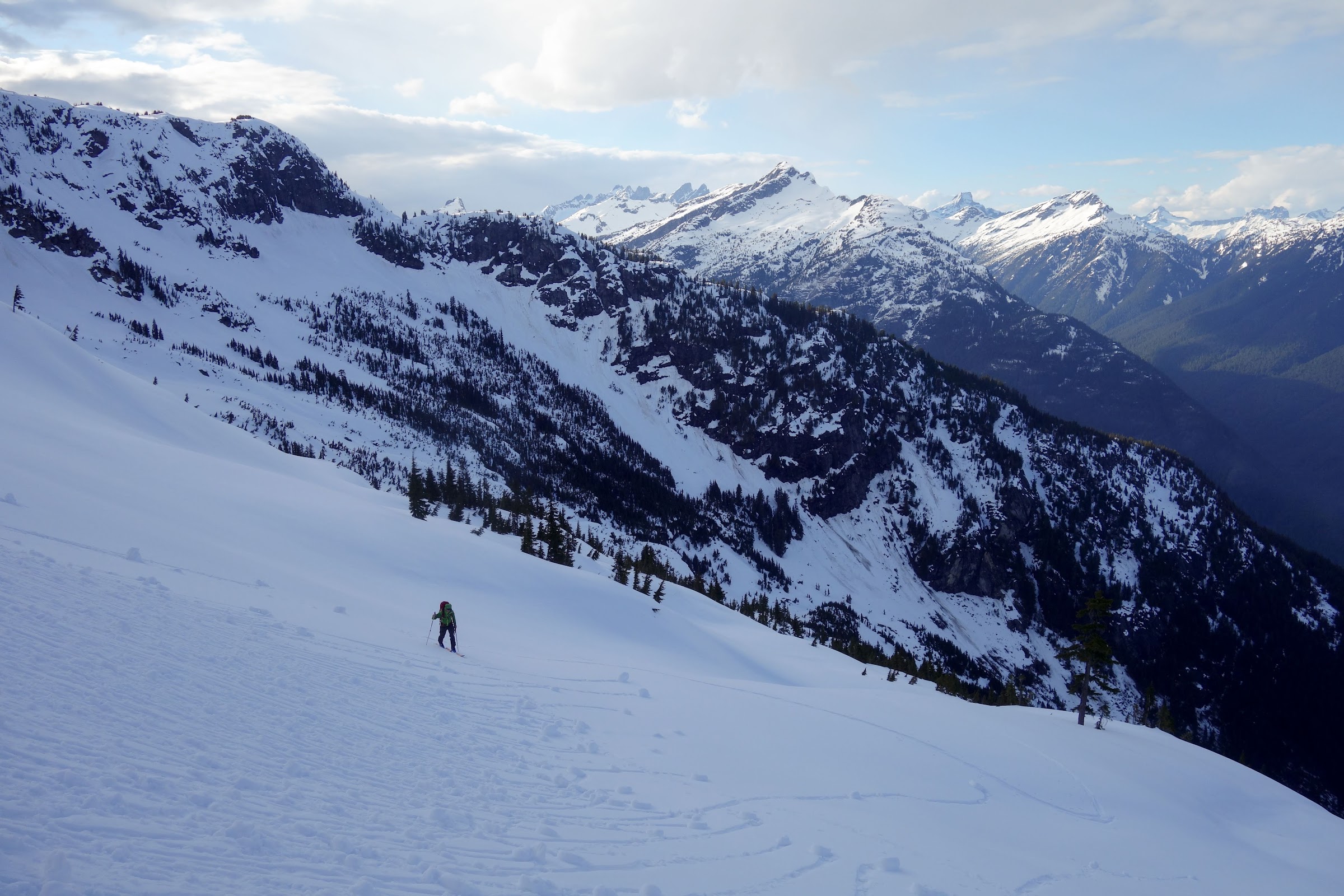 On the ridge abutting Pyramid Peak, we happened upon a fantastic bivy cave with views towards Colonial. Chris took these shots, the first from the cave looking at Colonial, and then the next morning of me departing camp, with Pyramid Peak in background. 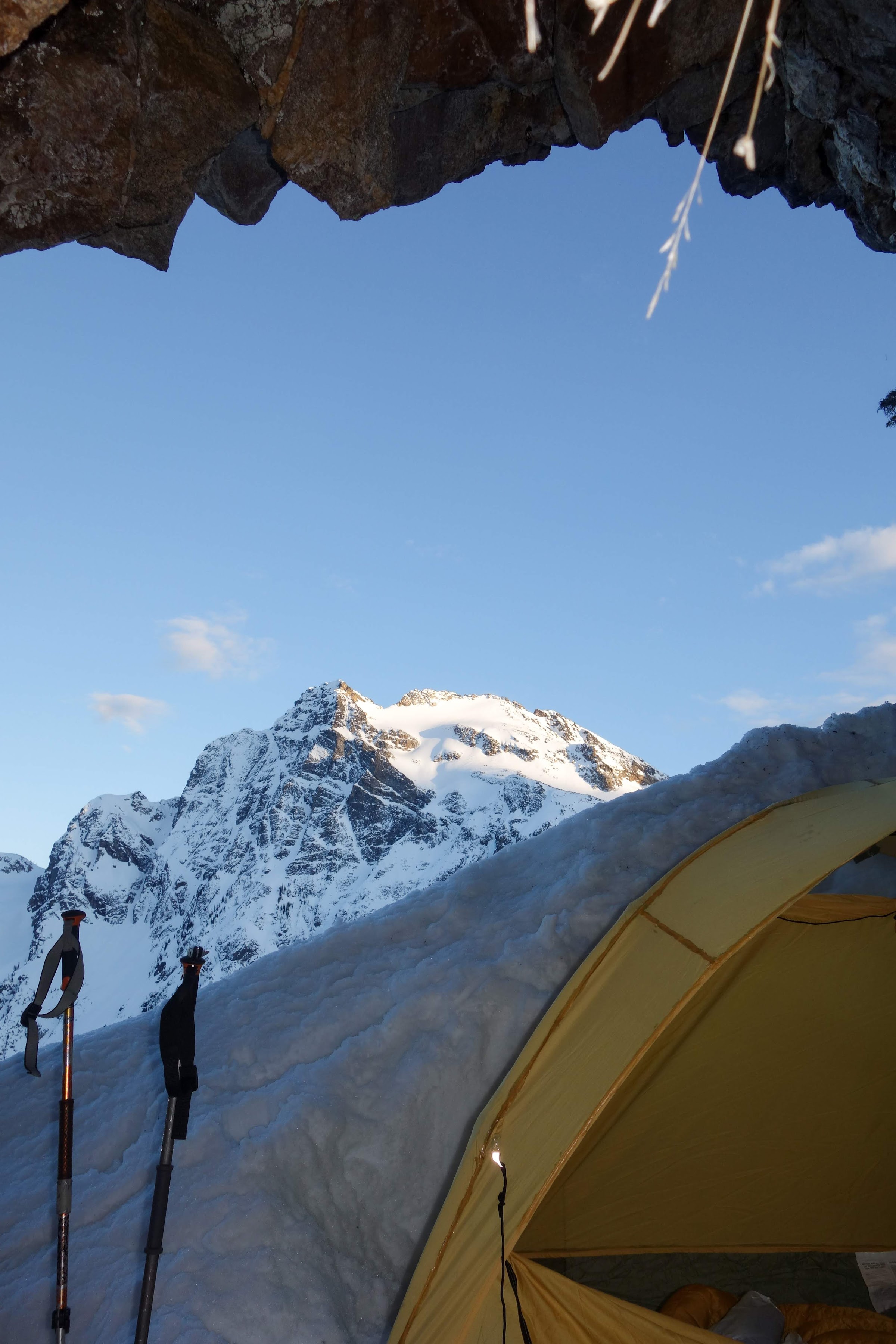 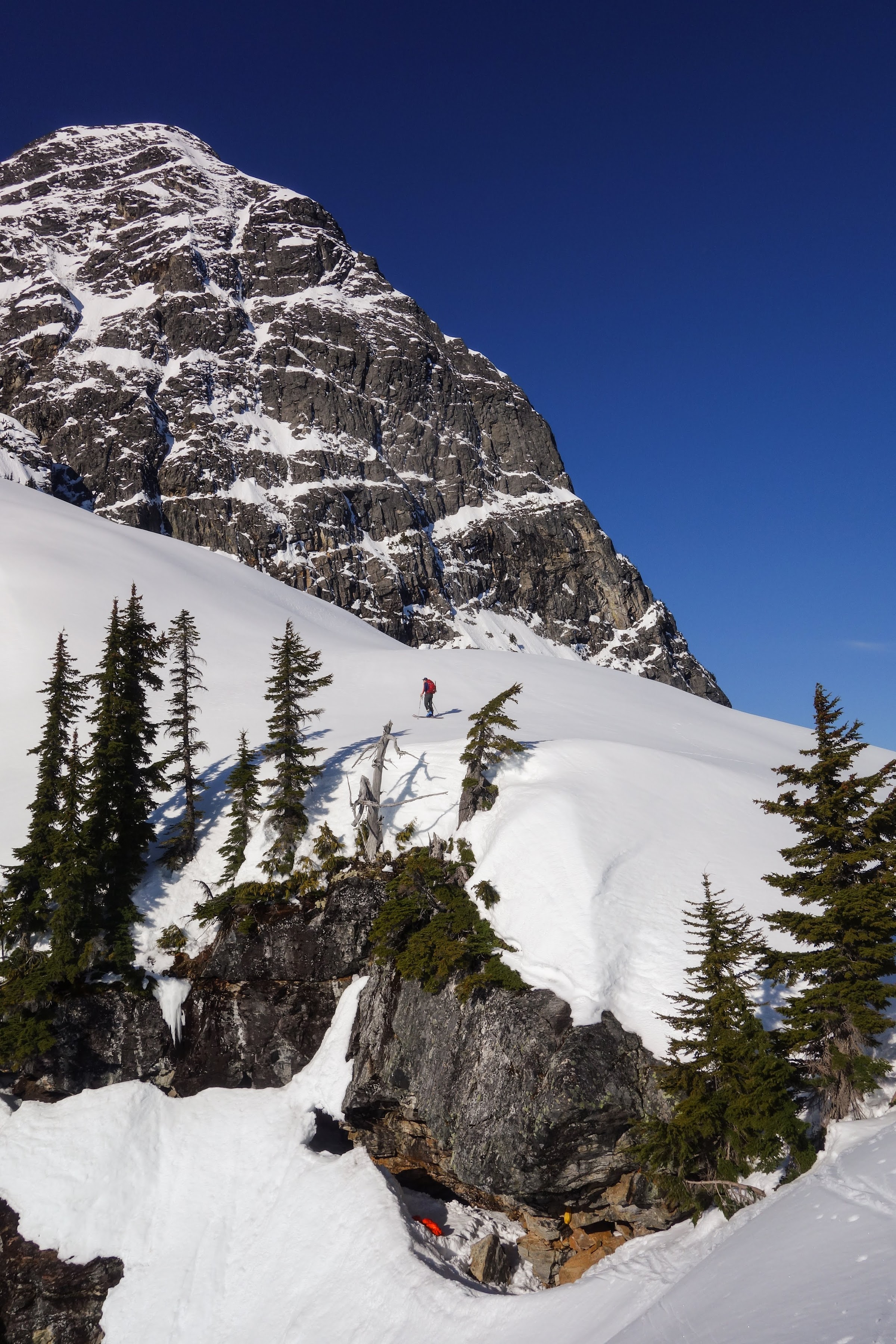 The climb of Colonial's west ridge route is pleasant. 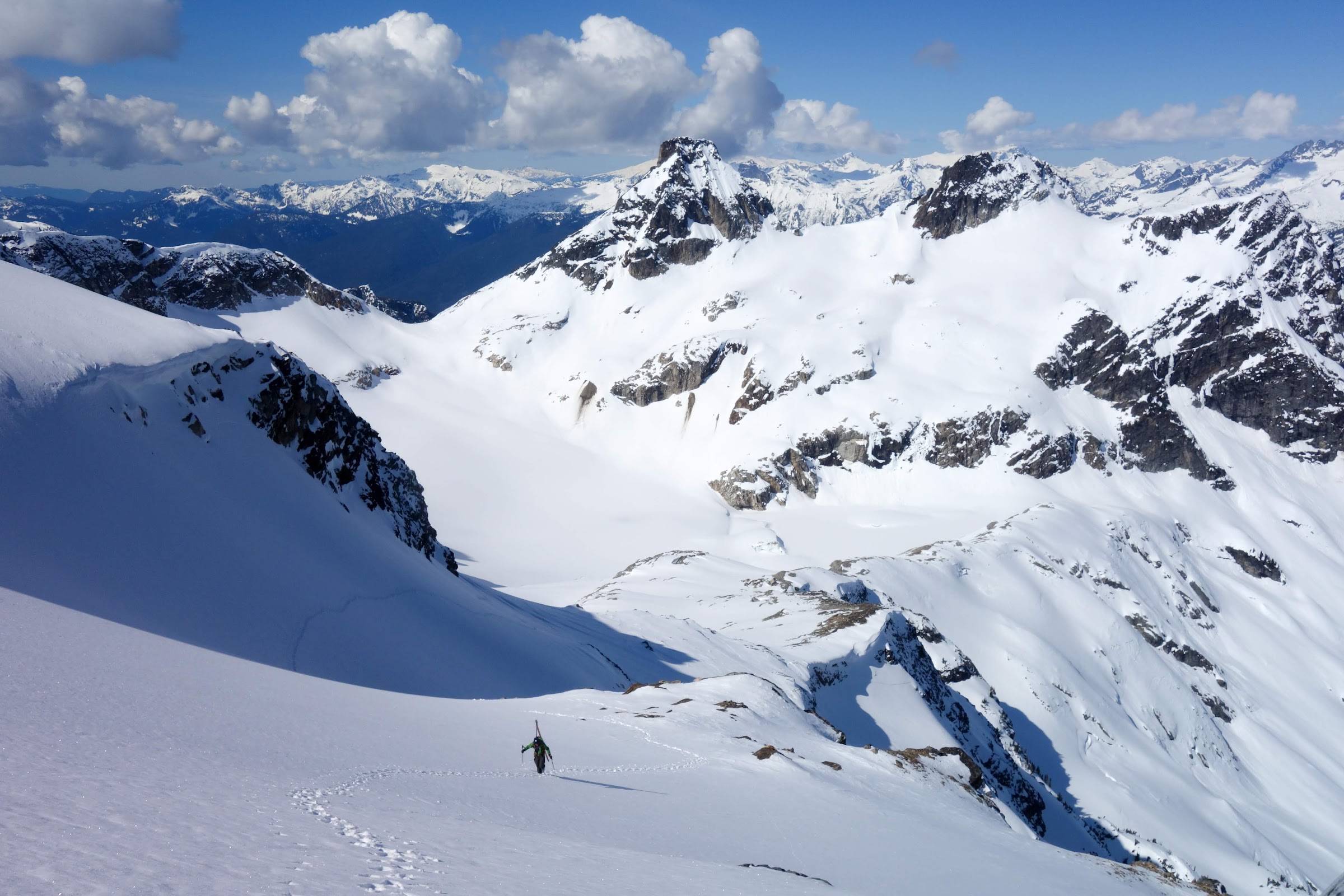 From the summit, views of Mantis Peak and Snowfield (and others!) conjured fond memories of a ski with Dan and Ryan years ago. 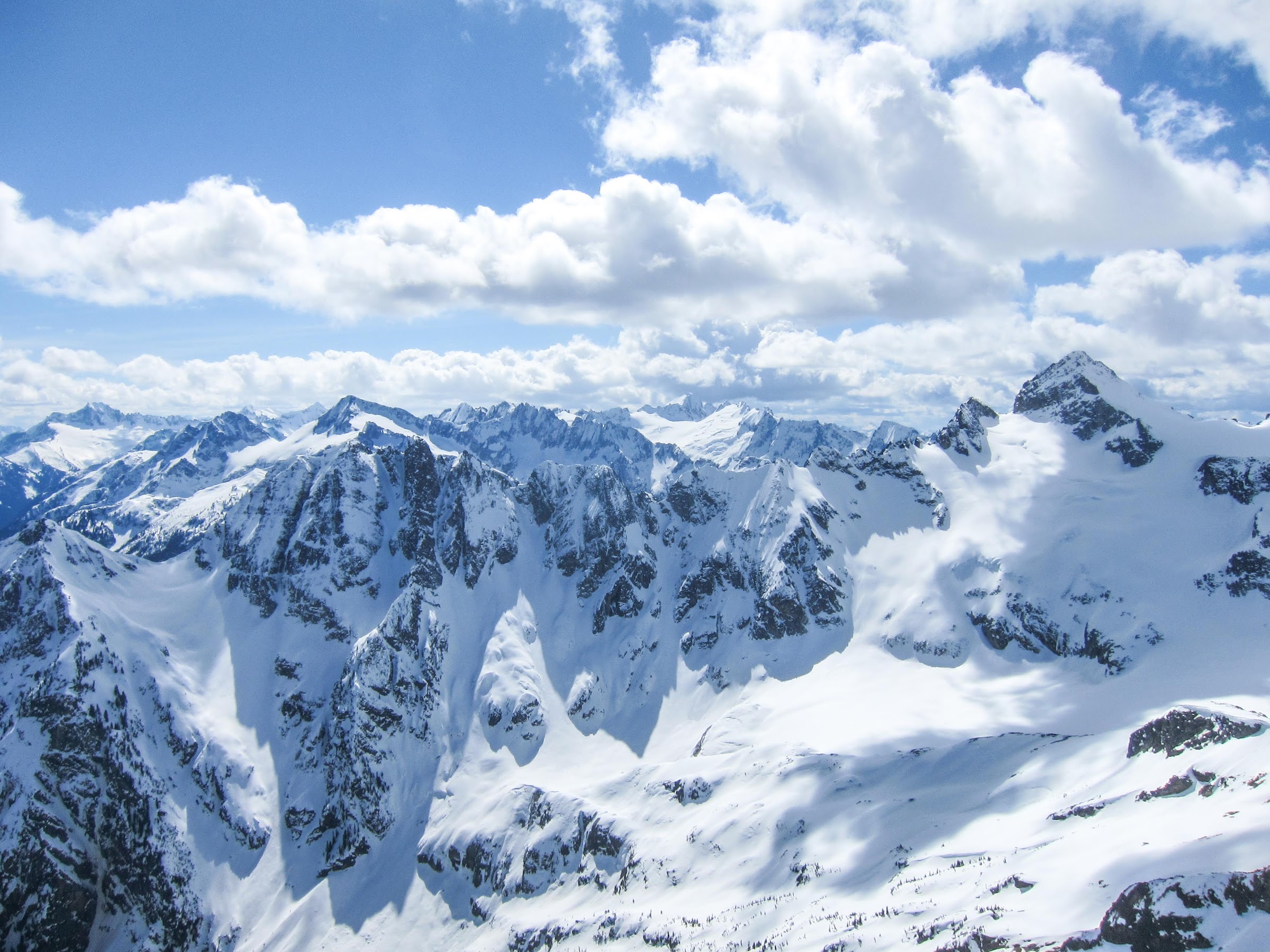 We skied from the 7771' summit of Colonial, only removing skis for approx 15' of rock. We found a few sweet turns of corn on the south side, before dropping a steep stripe of snow towards the west ridge route. Chris acting like he's having fun: 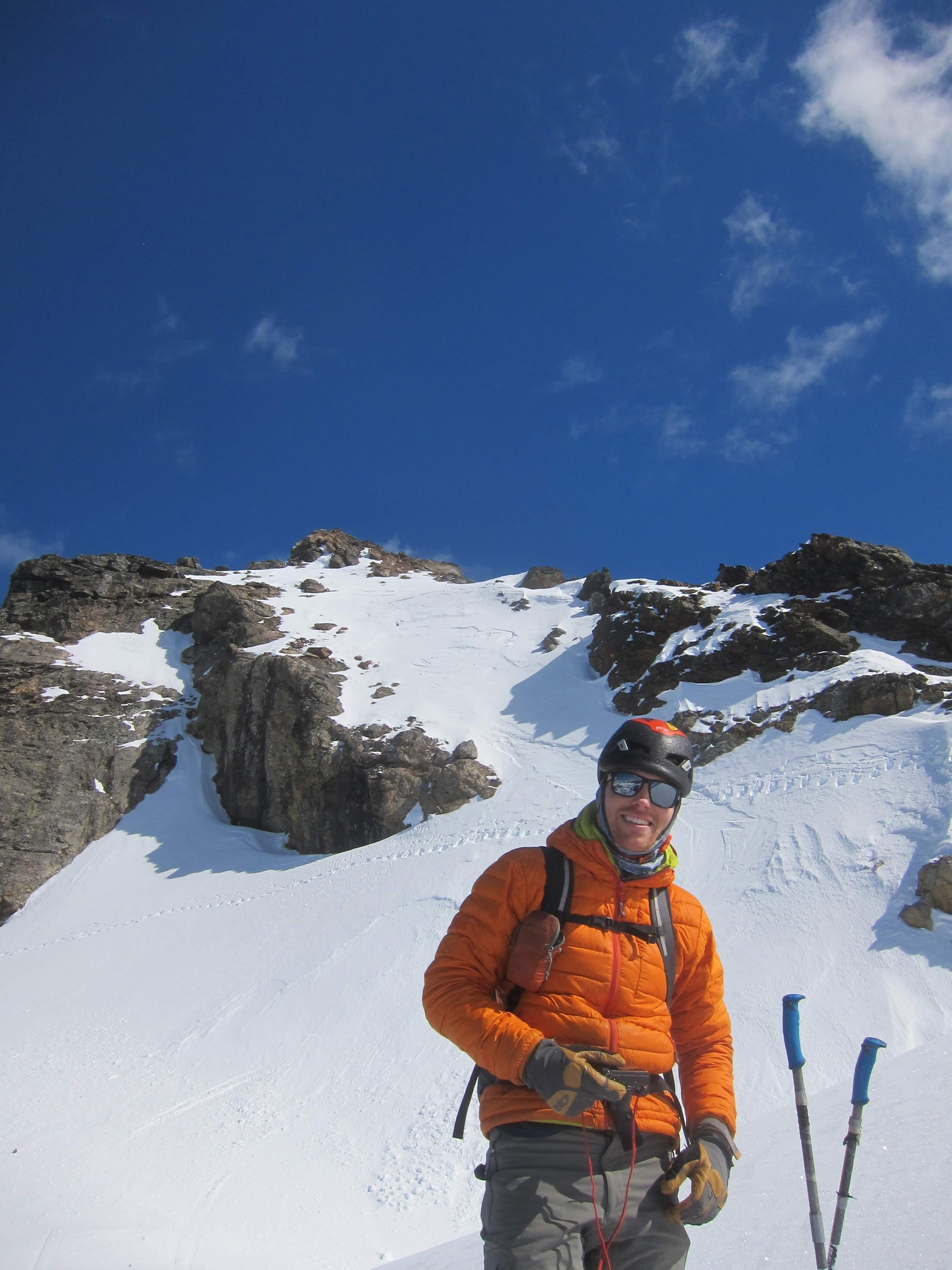 With that short bit dispatched, we somewhat reluctantly decided not to ski a nice stretch of powder-in-hand on the west ridge route, betting that a couloir we had spied on the morning's approach would also hold good snow.

So we traversed under Colonial's slightly lower western summit and quickly booted back up to the ridge top in order to drop the couloir. After a little variable funk up high, we were greeted by settled pow, corn, and other perfectly acceptable snow types all the way down to and across the Colonial Glacier. 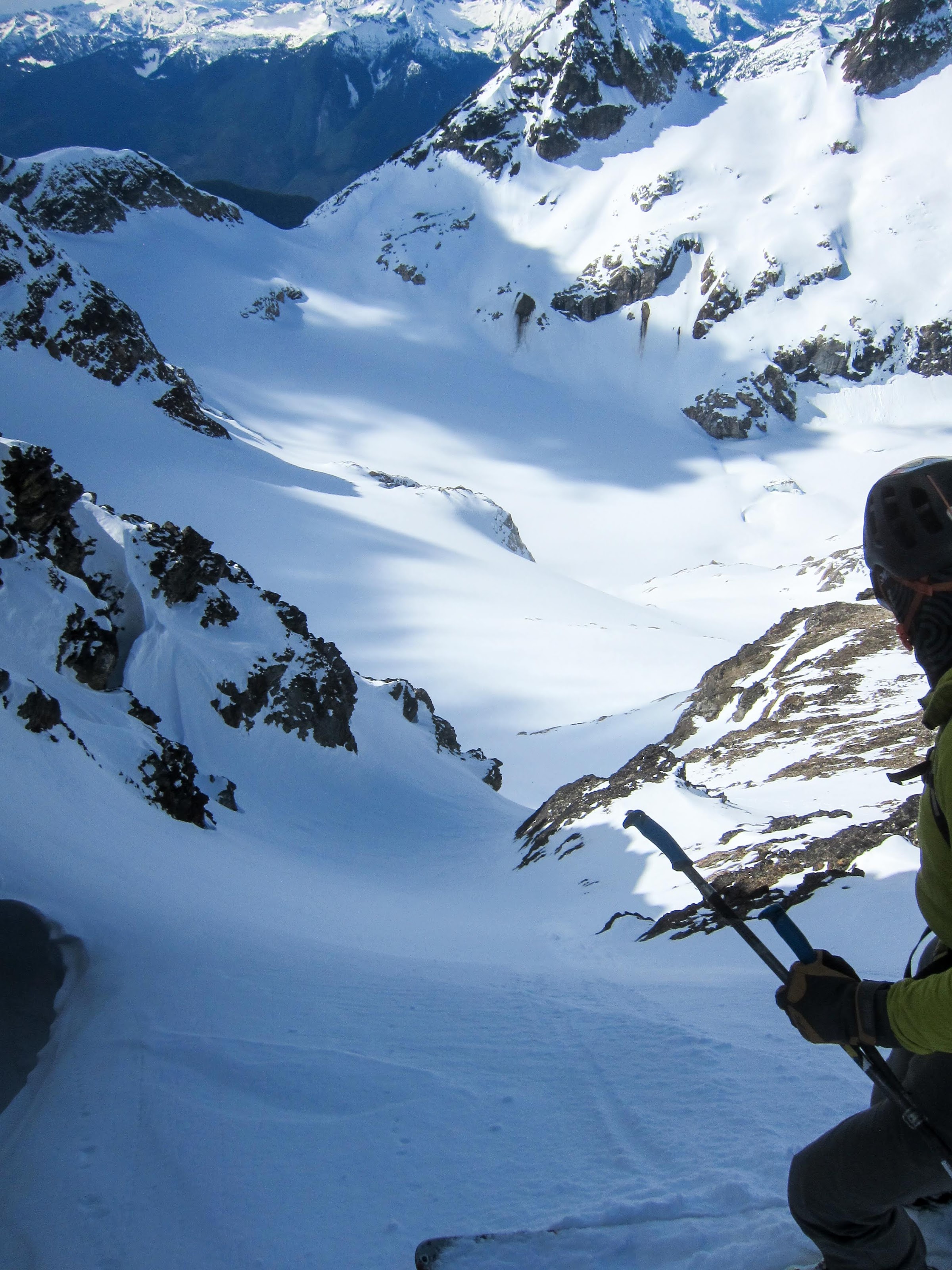 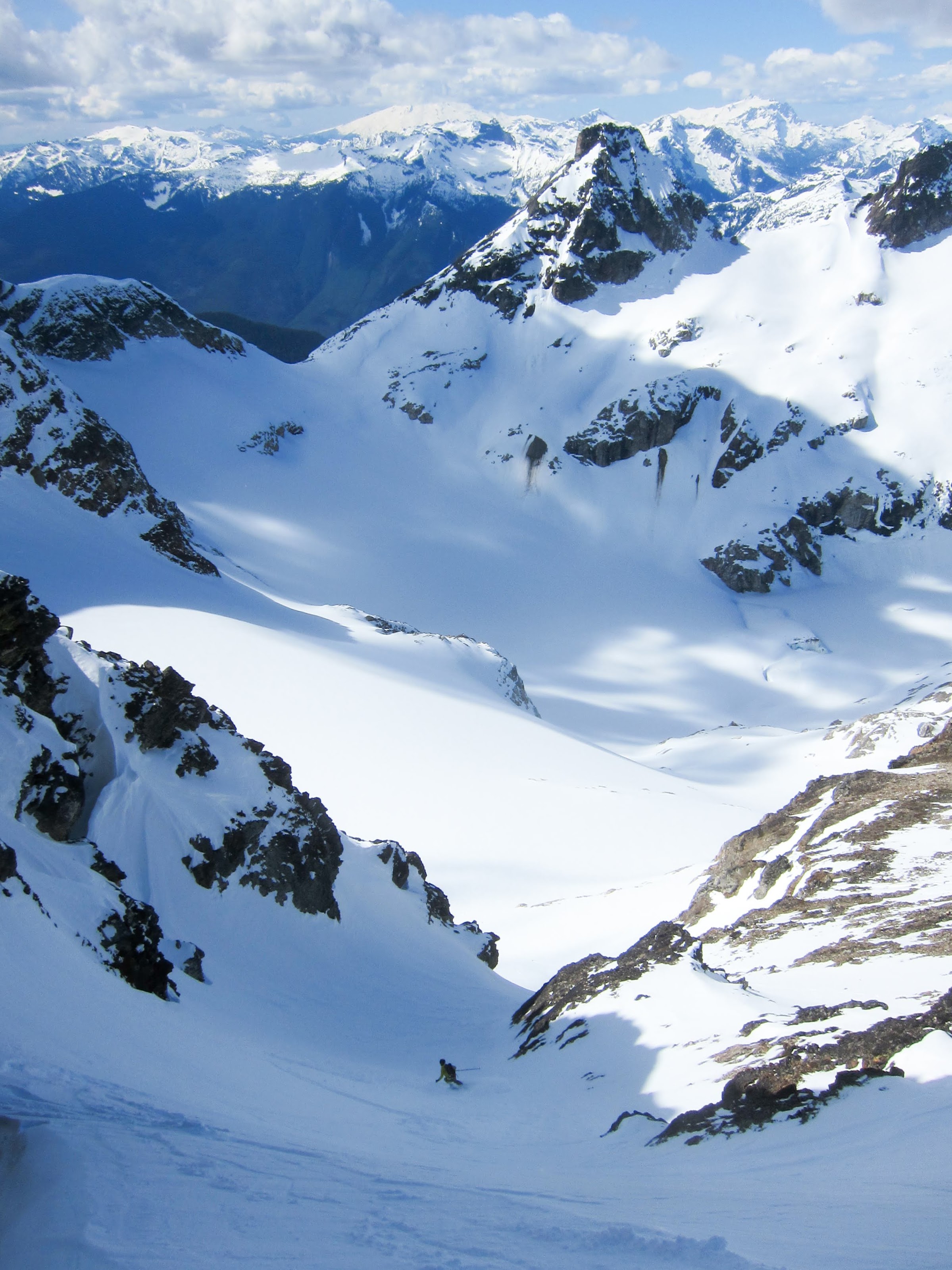 Chris clicked some great shots with background light effects on the glacier: 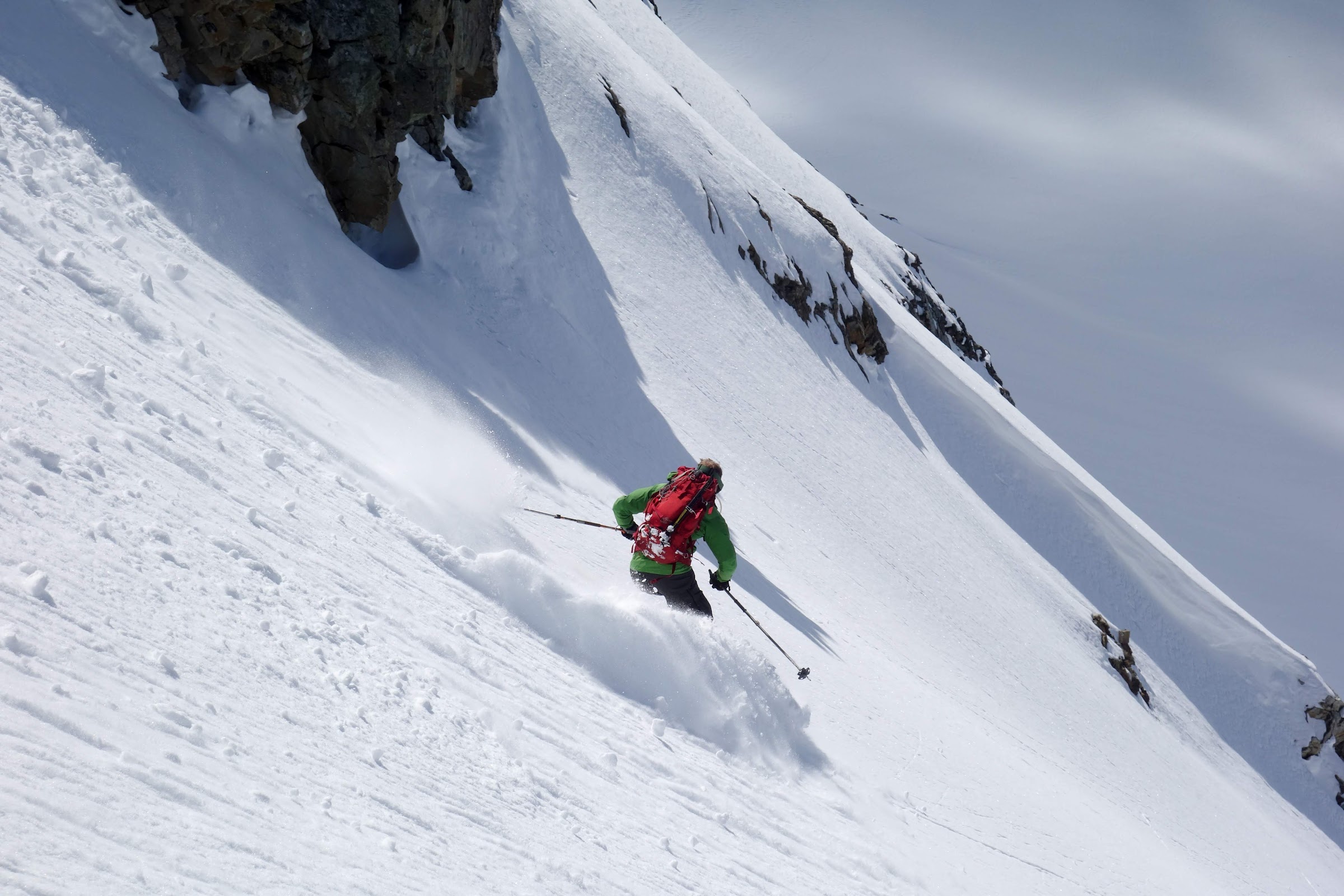 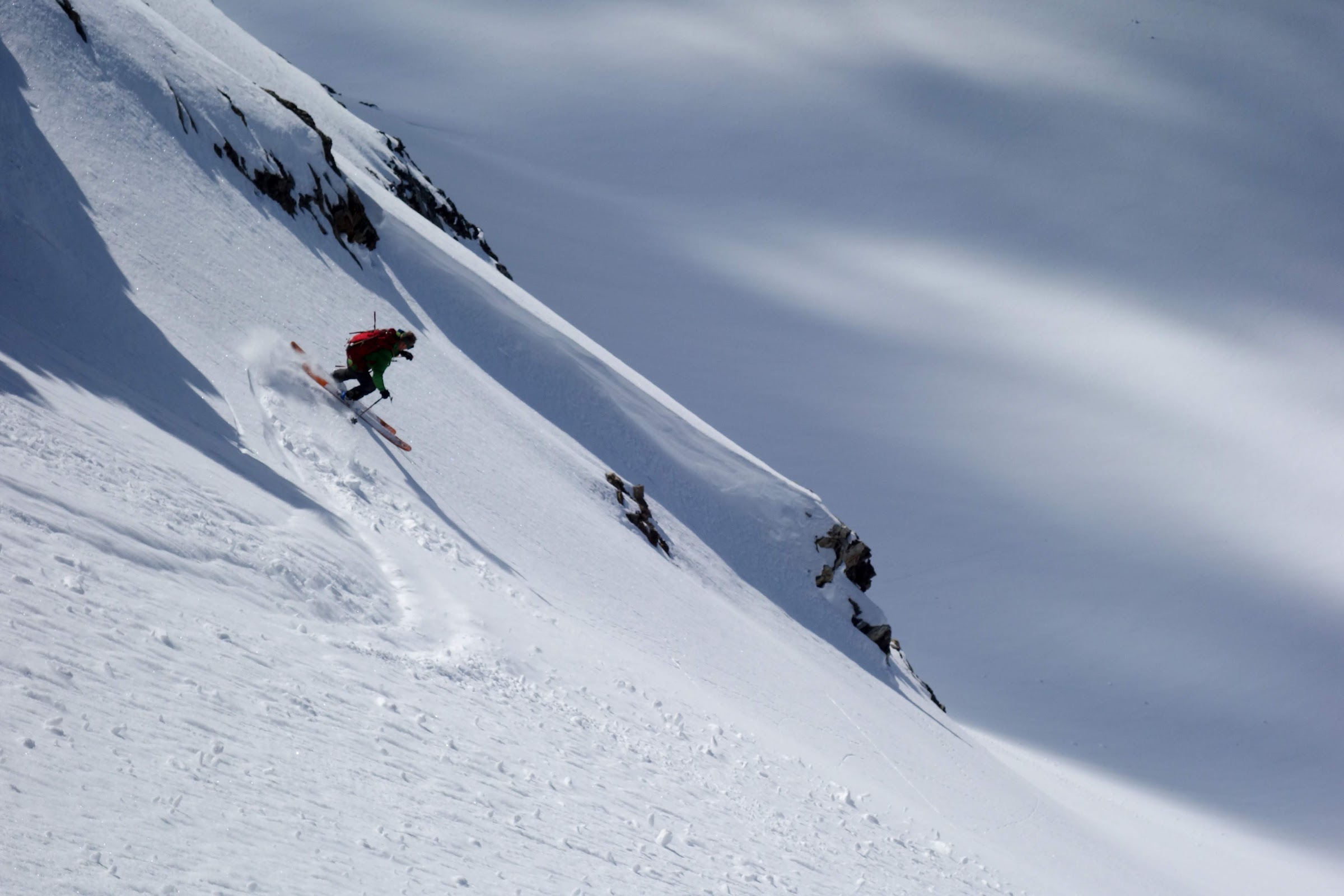 Chris mach-ing at the couloir's exit; it was fun to make fast turns through here: 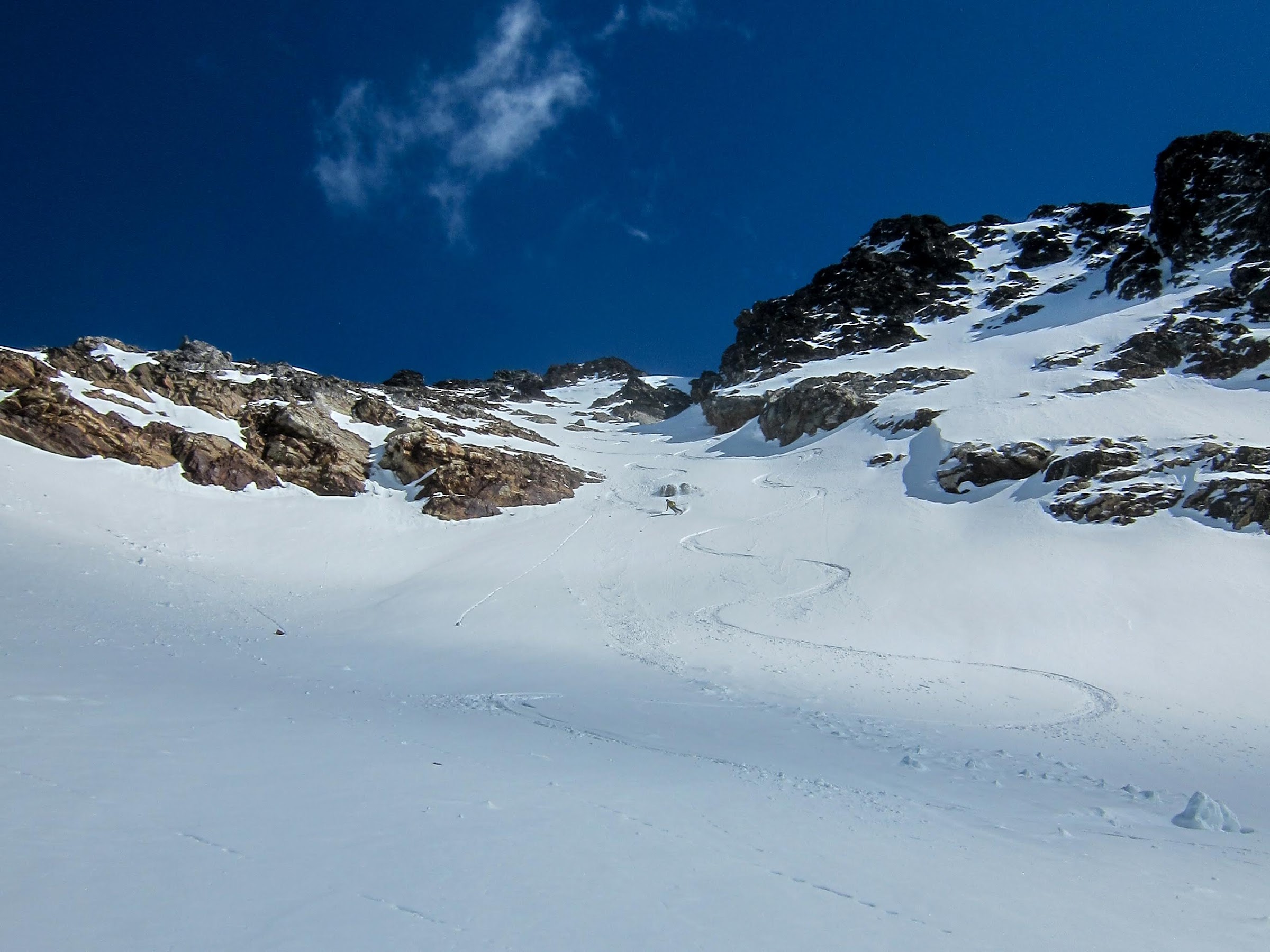 Below is a shot taken from the terminus of the glacier, before the traverse back towards Pyramid peak. Colonial is on the left, and I believe folks call the 7505' peak on the right Neve Peak. Colonial's highest summit is far left margin (we skied the highest strip of snow on the horizon), and what I'm calling (until corrected) the west couloir is a bit further right, accessed by traversing that high snow panel. 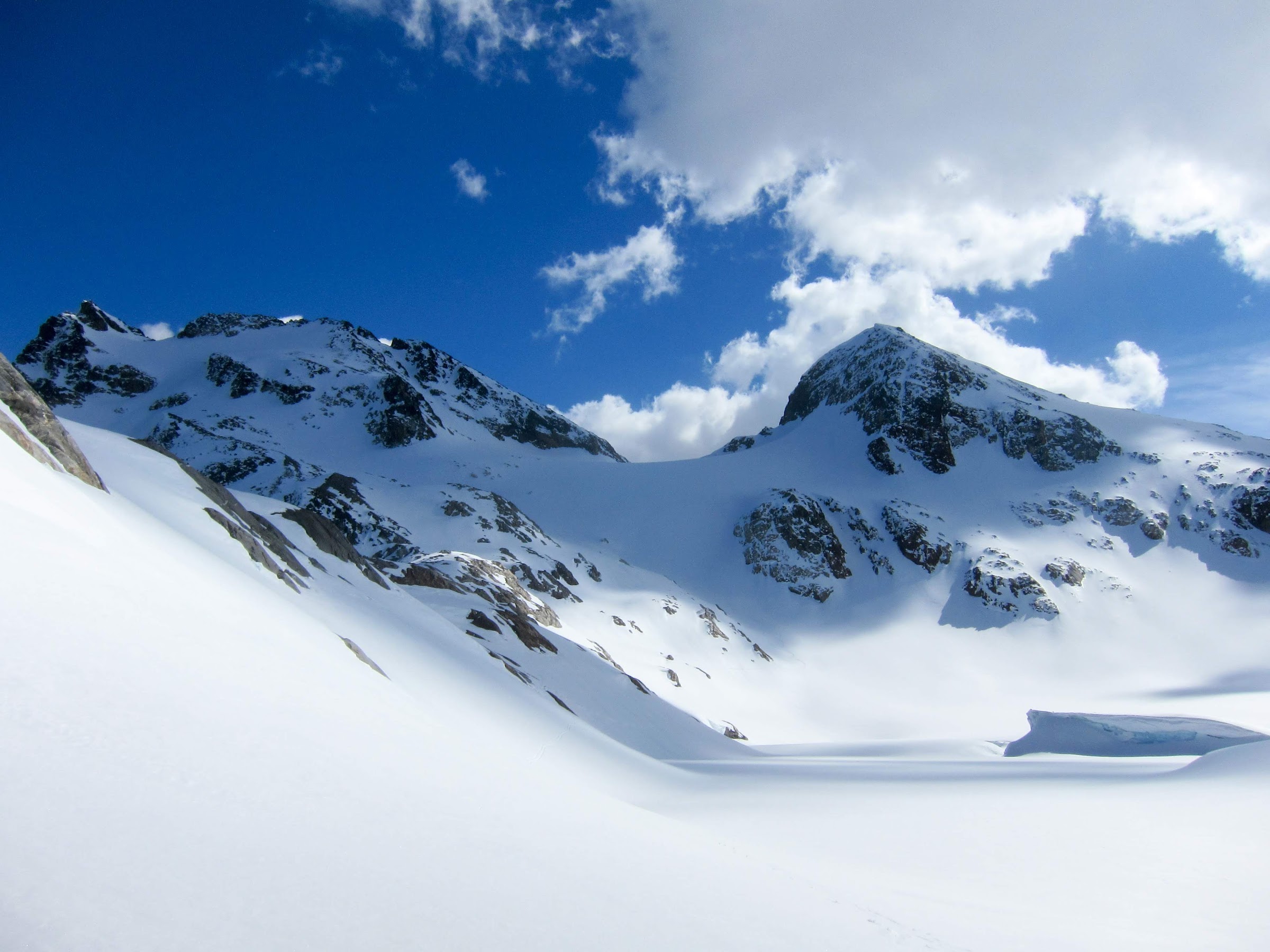 In short order, we were able to schuss back to the Pyramid ridge to collect our camp gear. The final descent included some arboreal combat skiing, but it all went quickly enough to the beers in Pyramid creek. This area is back on the list for ski touring when SR 20 is still closed!

I'm a little disoriented- is that the line we contemplated while waivering about Distal?

ryanl, yes indeed, in my attempt at brevity I omitted the fact that we had discussed this line with Dan during our deliberations.  Re-reading your Distal TR was fun--your insights re: payoffs and probabilities warmed my financial risk/reward heart.  And yes, happy to score this during my 'spring break' of like four days.

Sorry to hear you found yourself on not-great snow, kmcb. This time of year certainly can be a crap-shoot--when we drove up to the Colonial overlook Saturday morning to have a look, we were somewhat skeptical about our choice, but went for it anyway. Glad we did
2019-04-09 09:00:05
hedonaut