3/25/19
WA Cascades Central E
1981
7
Posted by Ross Bretherton on 3/28/19 7:53am
Drove up Cascade River Road to USFS 1540 with the goal of spending three nights at Hidden Lake Lookout and skiing whatever conditions permitted. Made it to approx 2600ft on the road before a few patches of deep snow prohibited further travel, then began the 7.5hr slog with heavy packs to the lookout. Consistent, skinnable snow began a little over a mile up the road, so we opted to take the summer route up the Sibley Ck. drainage. The sun kept the crusty snowpack soft for most of our day, and that night's weather system rolled in just as we reached the pass before the lookout. Traversing below fat cornices with near zero visibility and the weather deteriorating? Not fun. We made it to the lookout at about 4:45pm and caught some fleeting views of the surrounding North Cascades. 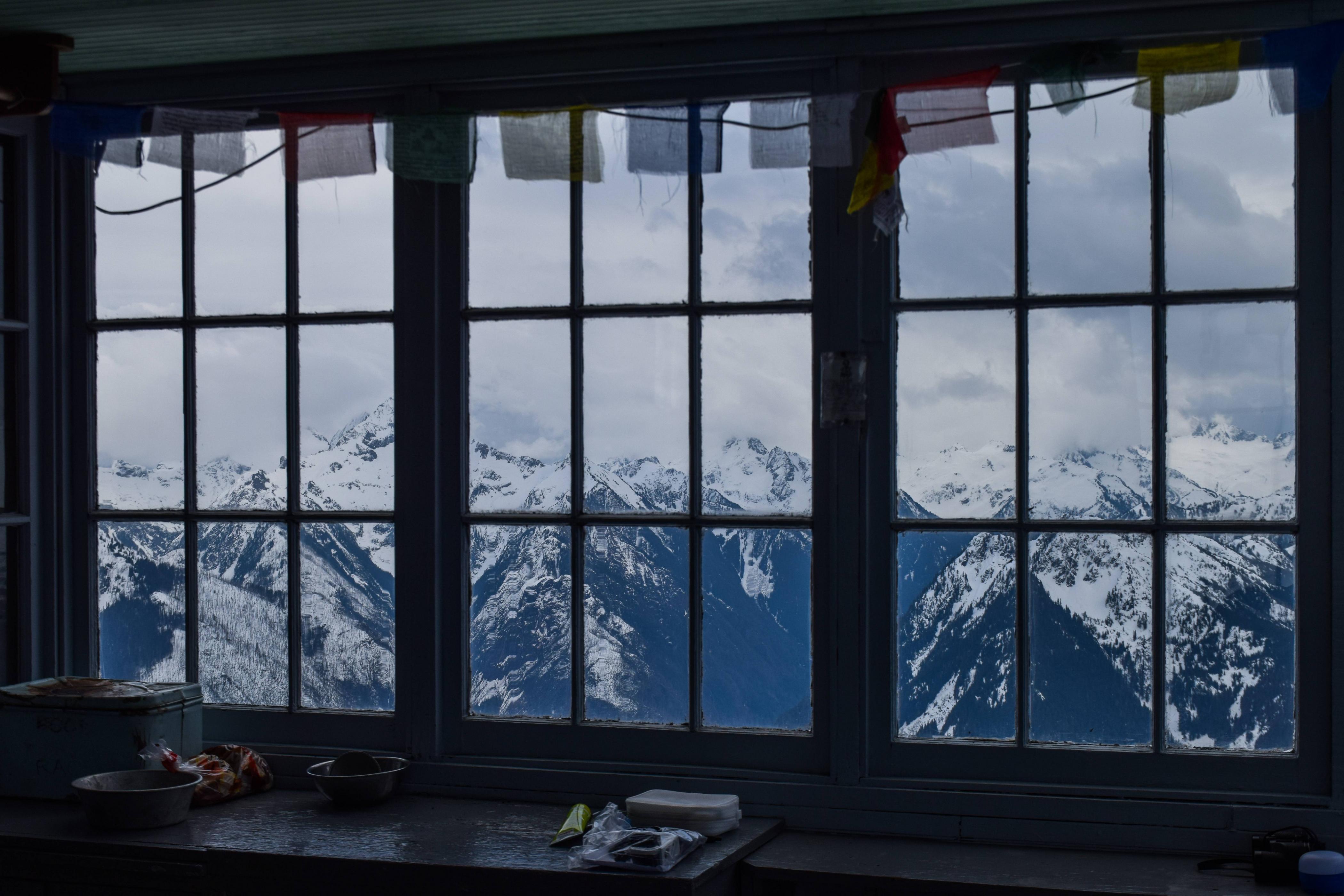 Mount Formidable out the window

The next morning we woke to 3-4in of new snow, howling winds, and variable visibility. Taking a very slow morning start, we left the lookout at 11:30am and descended to the lake under good snow but vertigo-inducing flat light. Through the latter half of the day the clouds began to lift so we worked our way up the NE face of Pt. 7088. Dropping over the shoulder, we descended the skiers left branch of a Y-shaped couloir immediately above the lake. Anyone got names for these chutes? 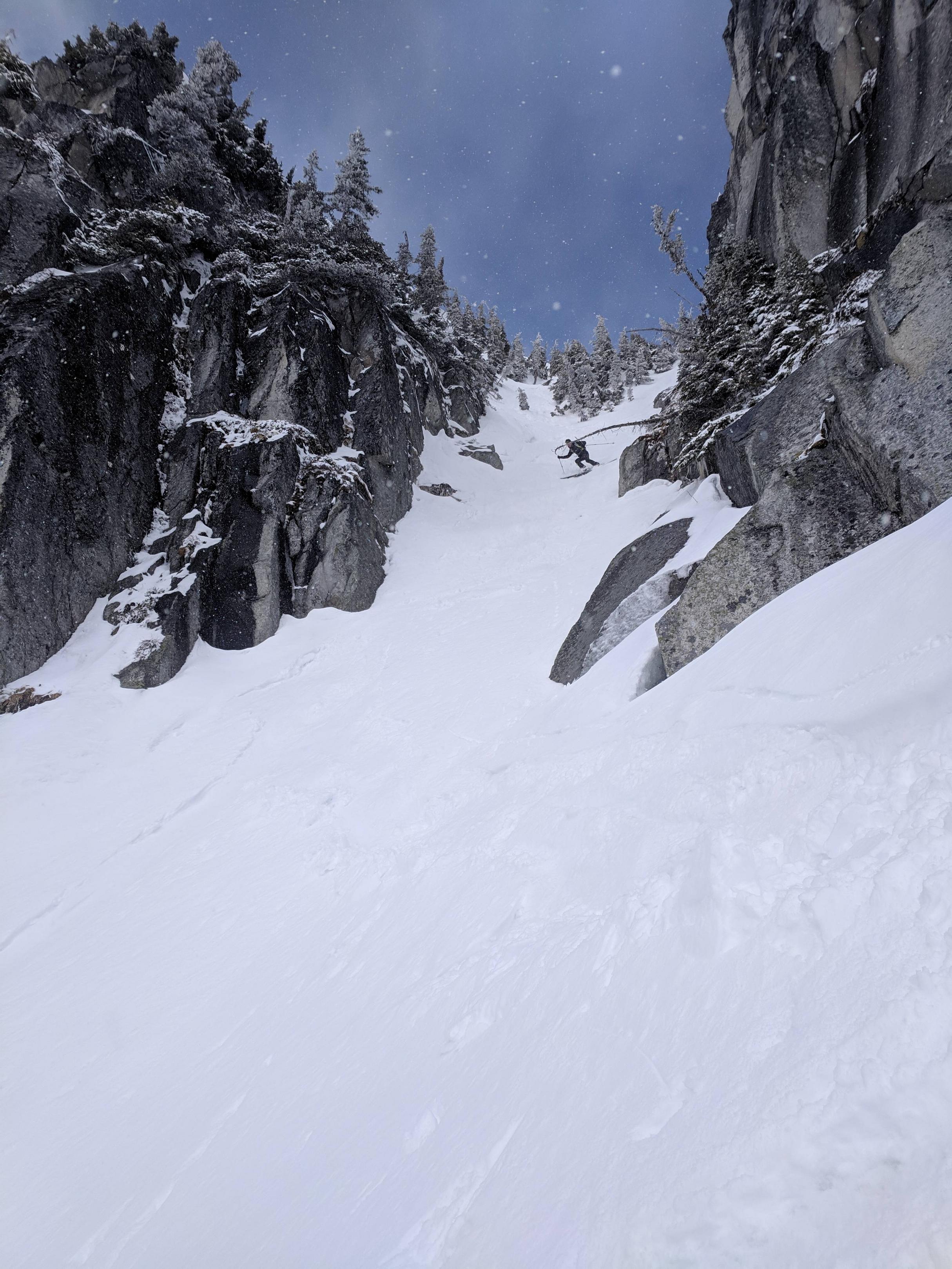 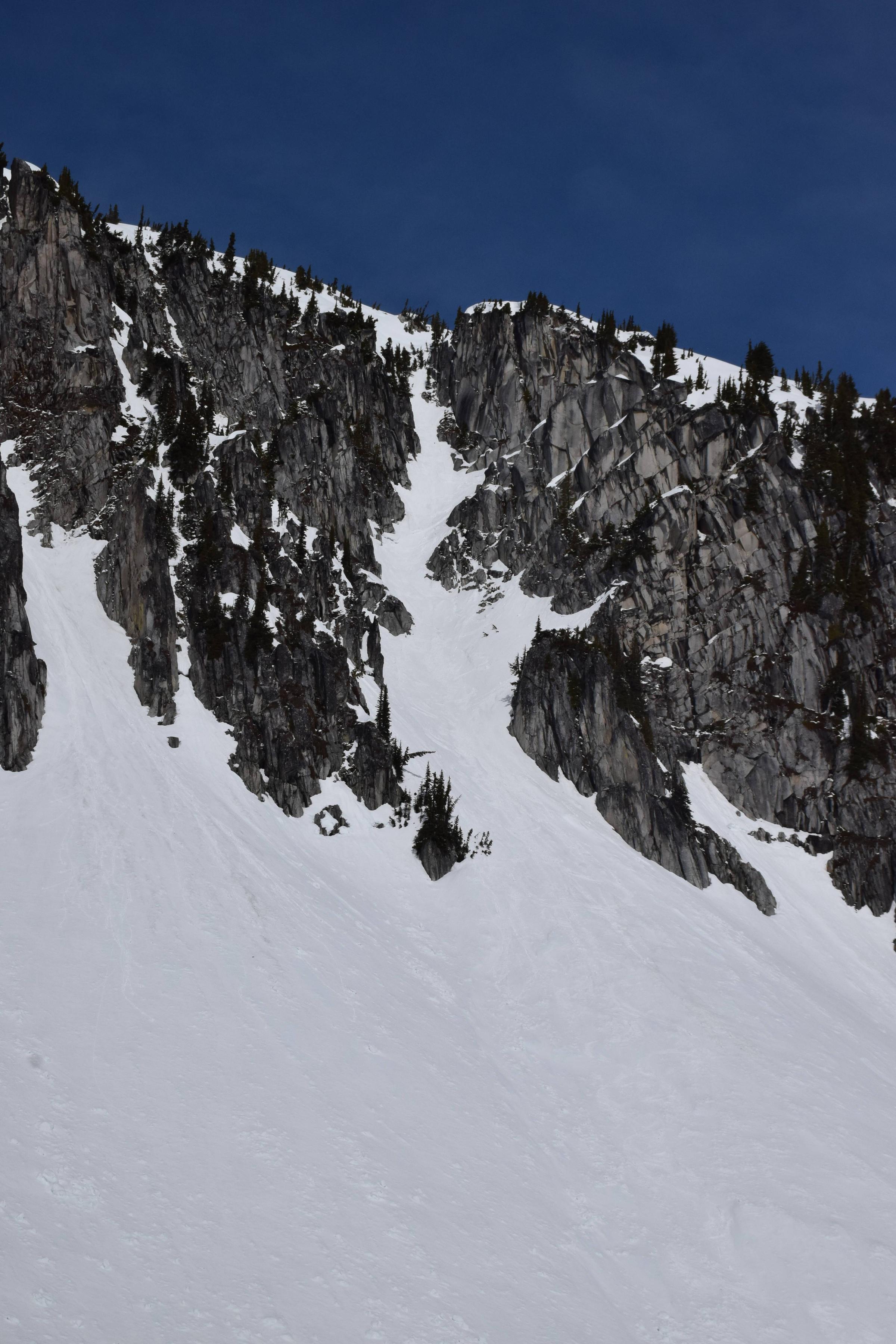 Making it back to the lookout by dinnertime, we were greeted with clearing skies and the most spectacular sunset I have ever witnessed. 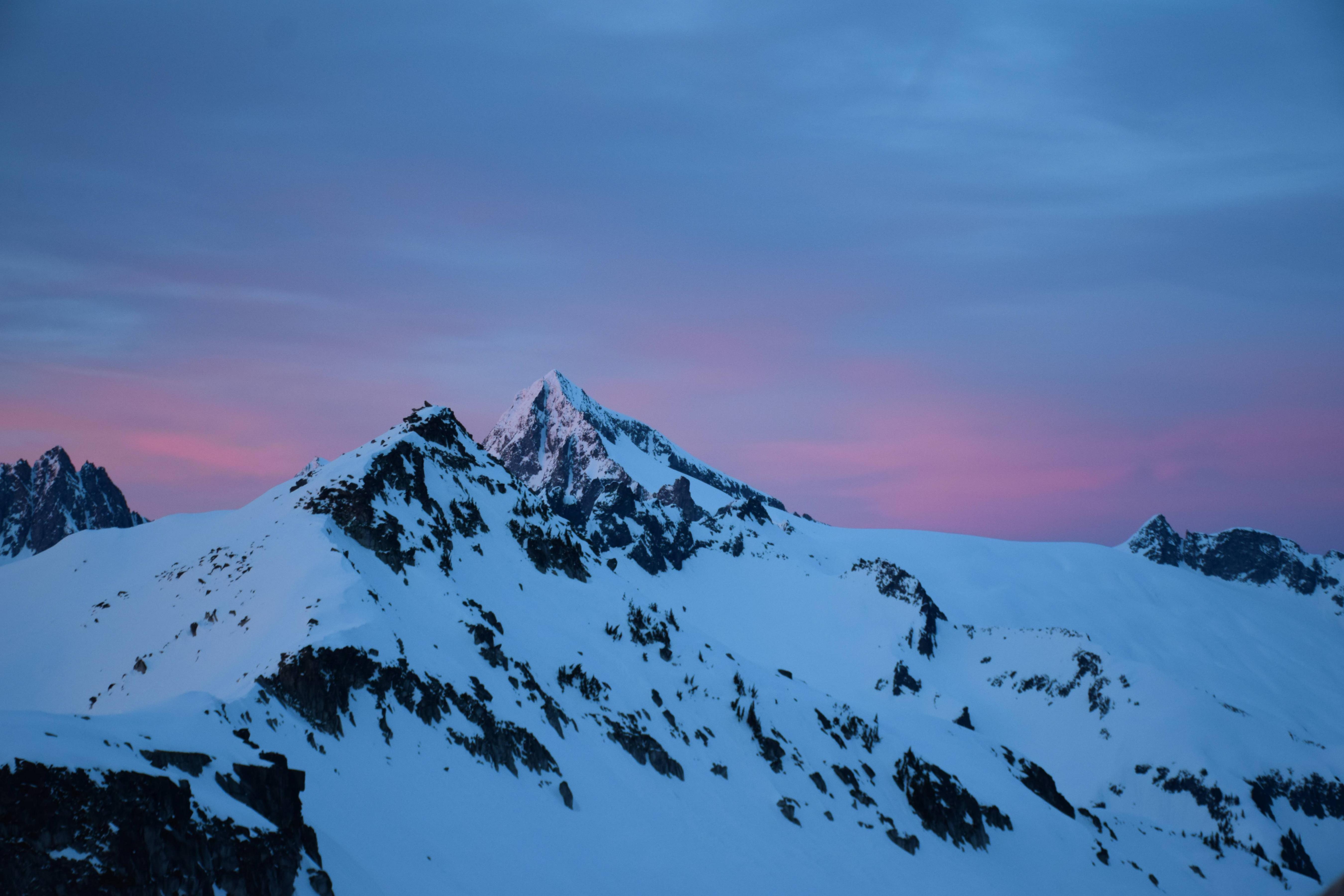 Pt 7088 with Eldorado in the distance 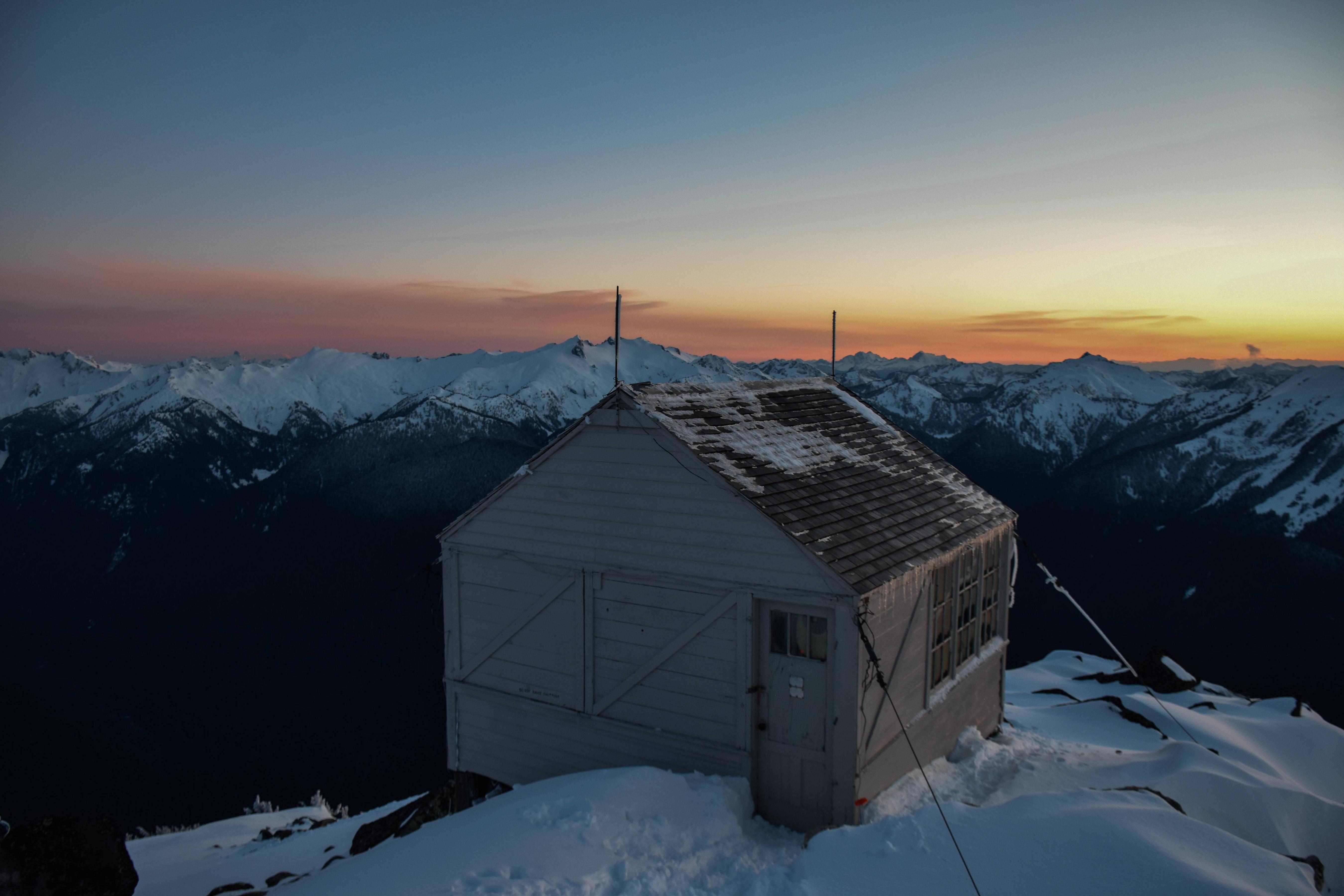 Lookout with Snow King in the background 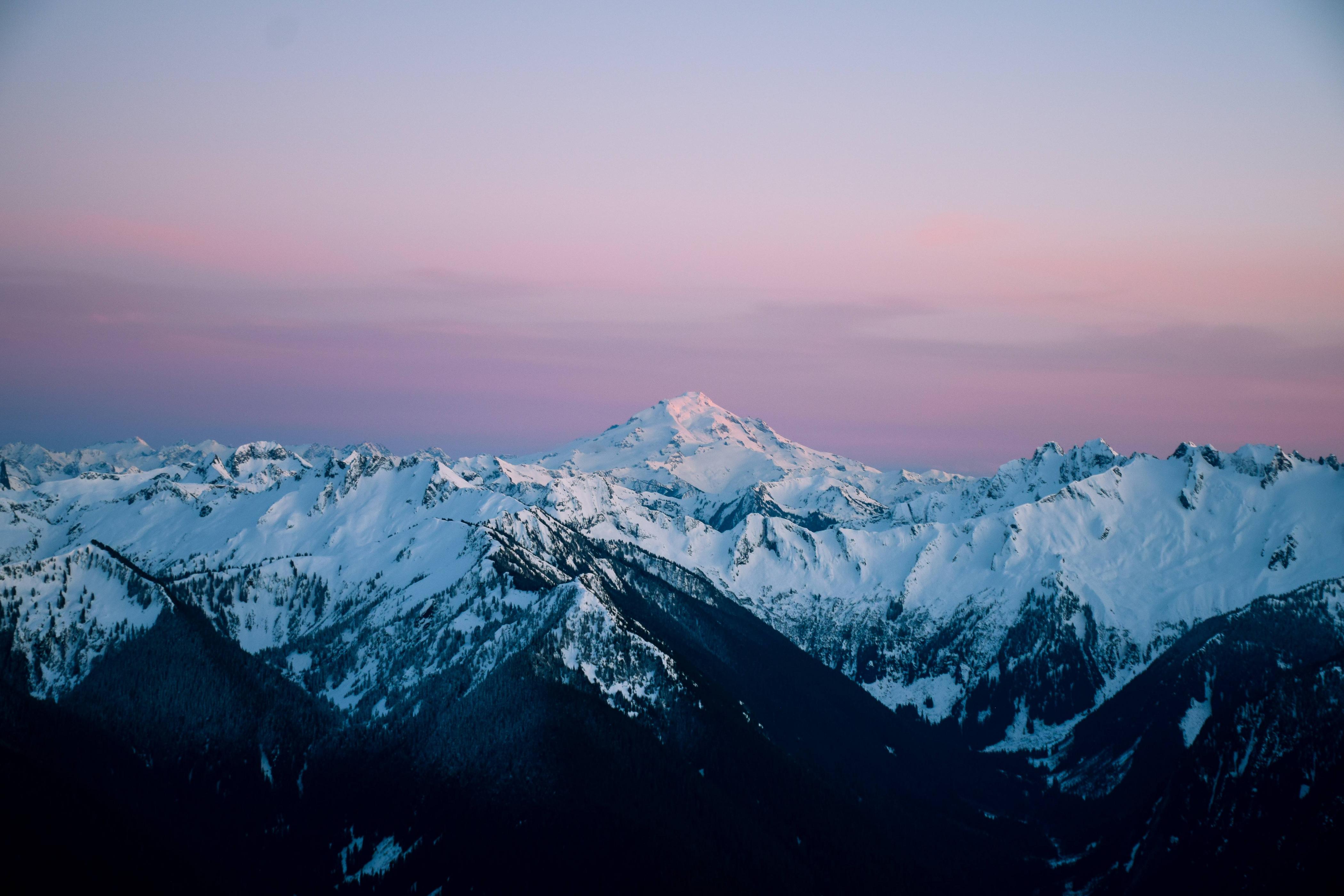 
The third day we woke to clear skies and warmer weather so we headed out of the hut to ski everything in sight. The run to the lake is much more fun when you can actually see where the slope rolls over! Taking advantage of yesterday's skintrack, we put in a warm-up lap down the NE face of 7088, which skied wonderfully with the new snow. 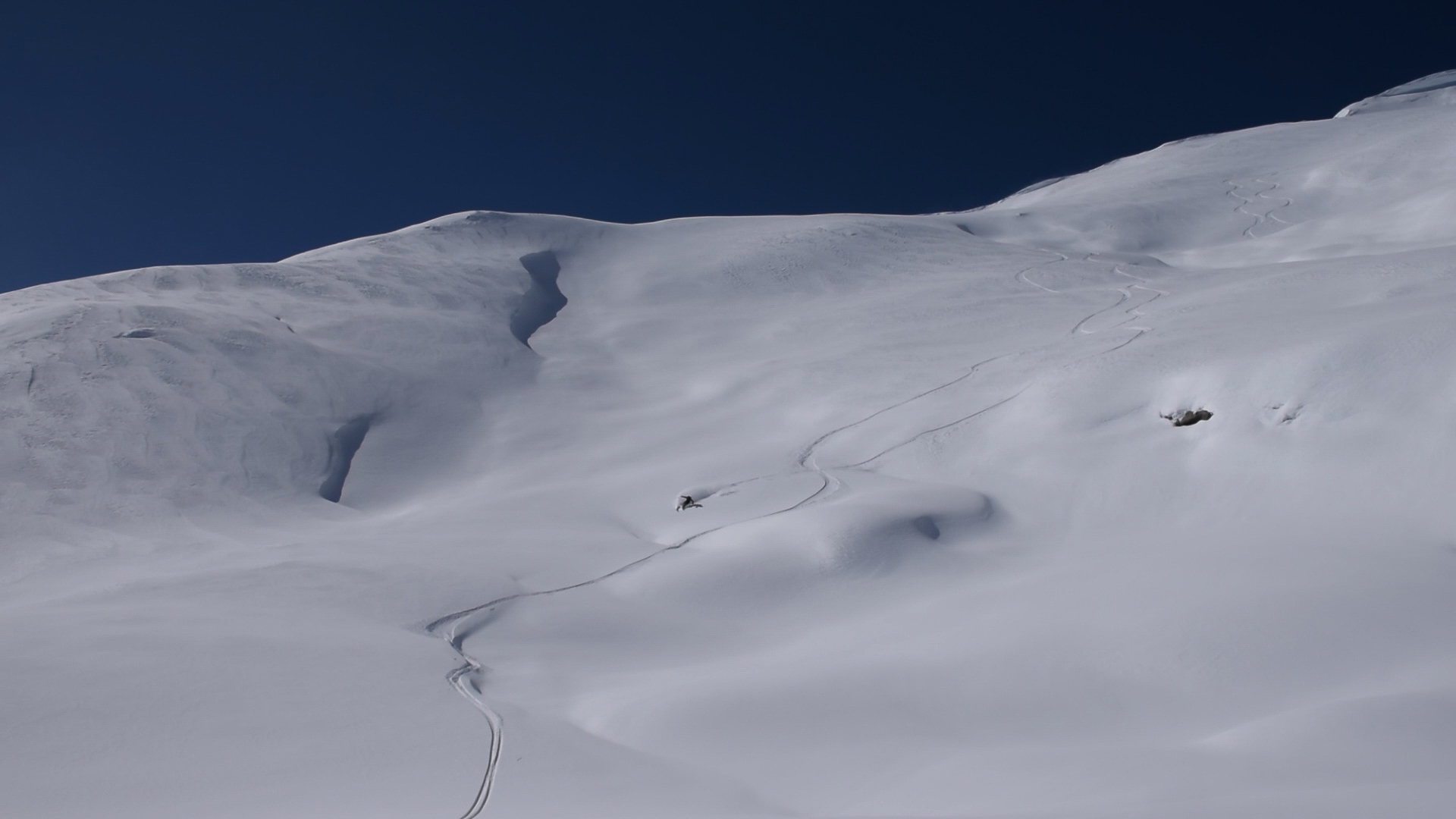 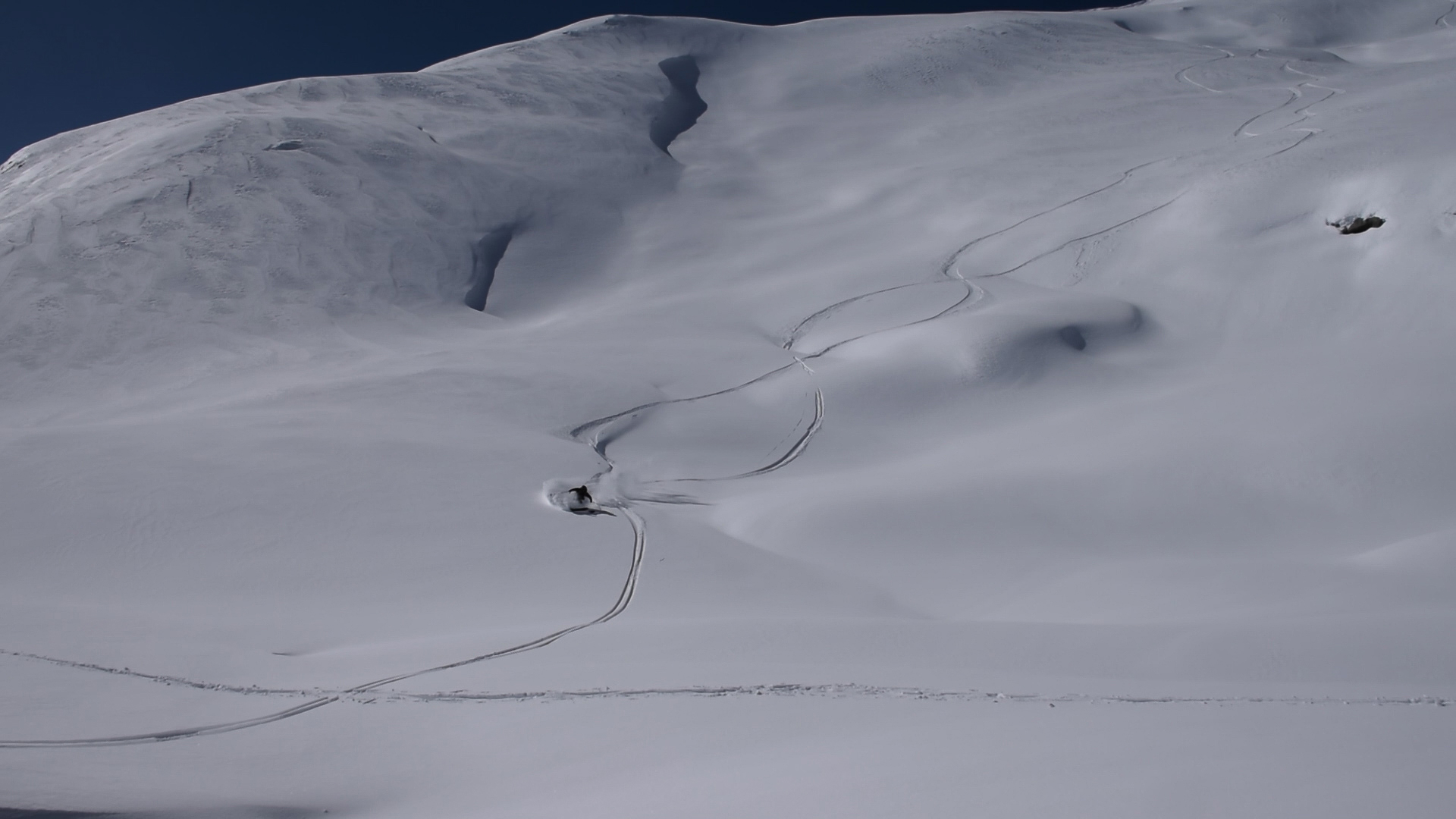 Then we hopped over the shoulder yet again to drop into a 55-deg chute we dubbed "Sleep Apnea" (referencing the periodic schussing noise you make on the jump turns punctuated by 10 seconds of silence when you make it to the ski-wide choke and stop to pee yourself). 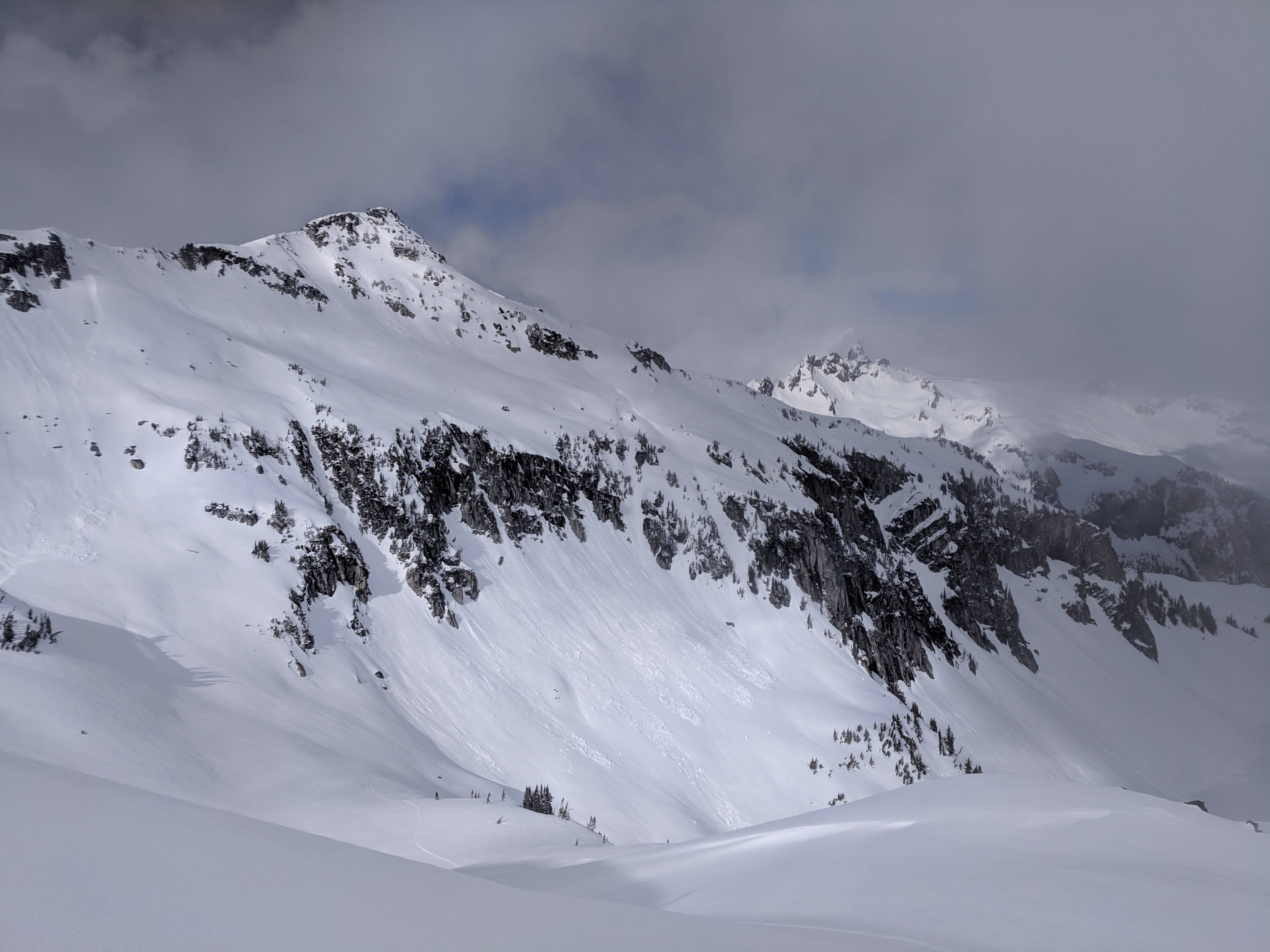 The left-most chute in the middle cliff band on 7088 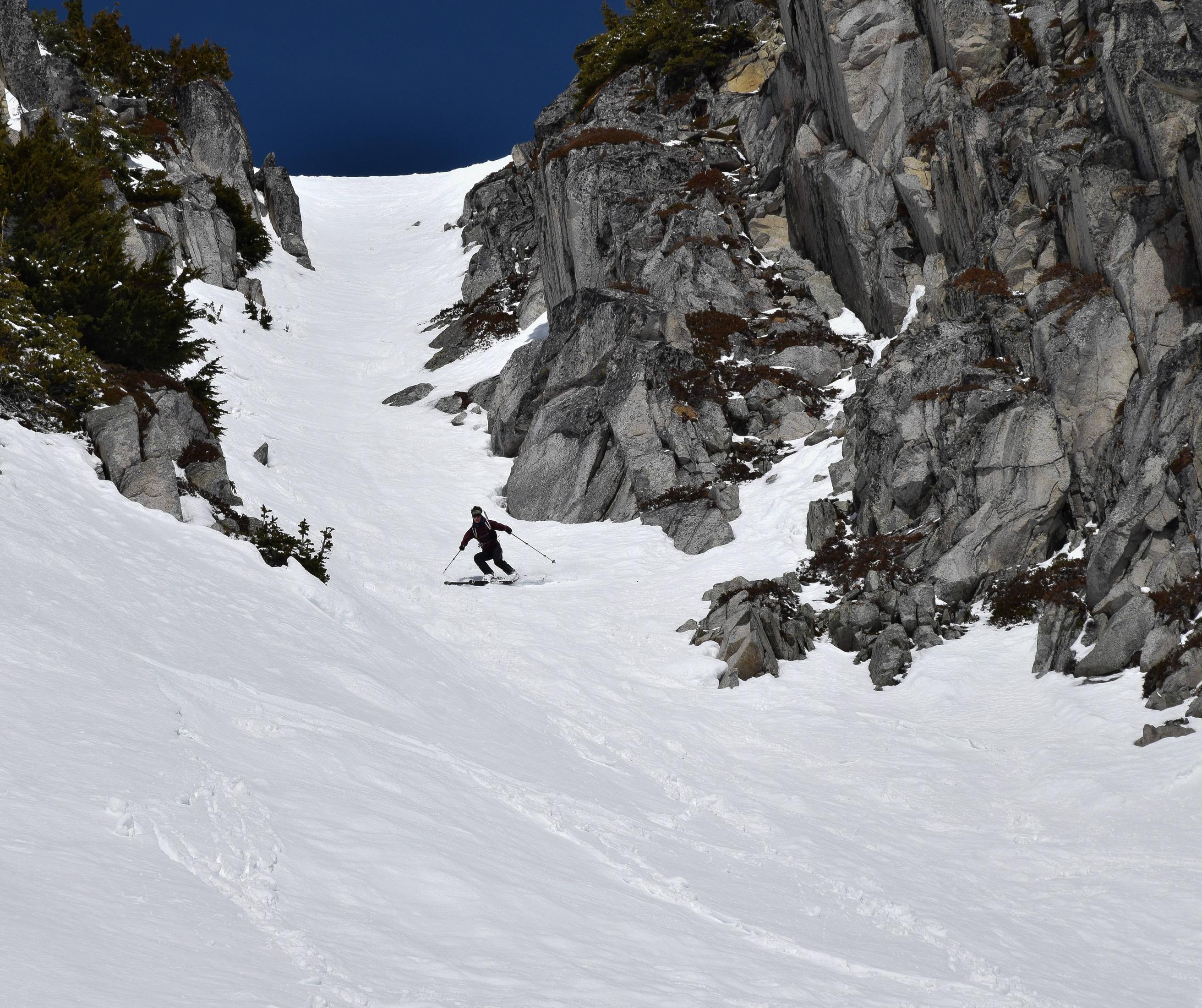 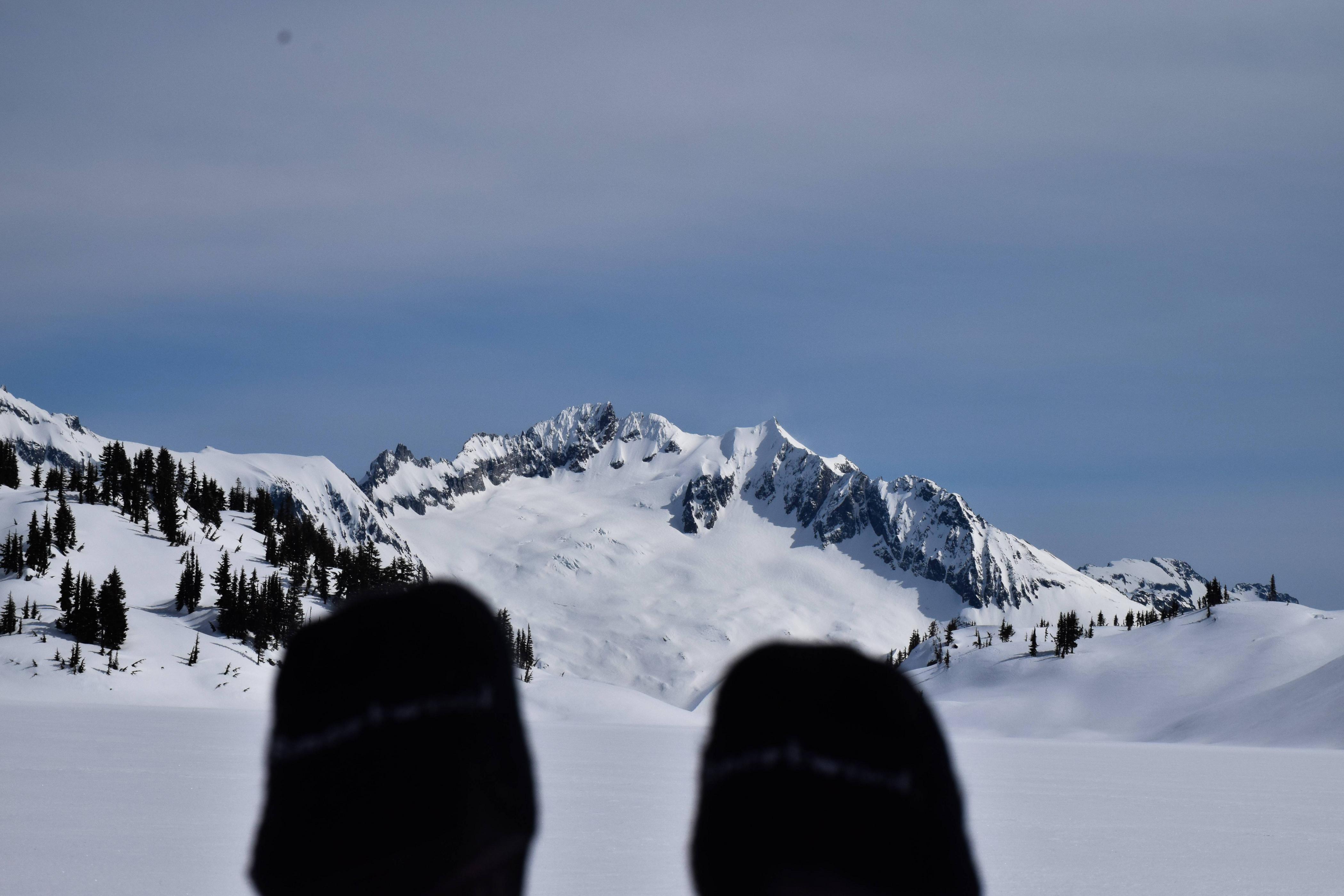 South facing slopes were baking fast so we turned our sights on a N-facing 45-50 degree gash above the lake. Booting up the chute was a wallow – it was pretty majorly wind loaded. On the way down Ari set off two small wind slabs beneath his feet and watched them funnel into fairly large rivers of debris at the runout. 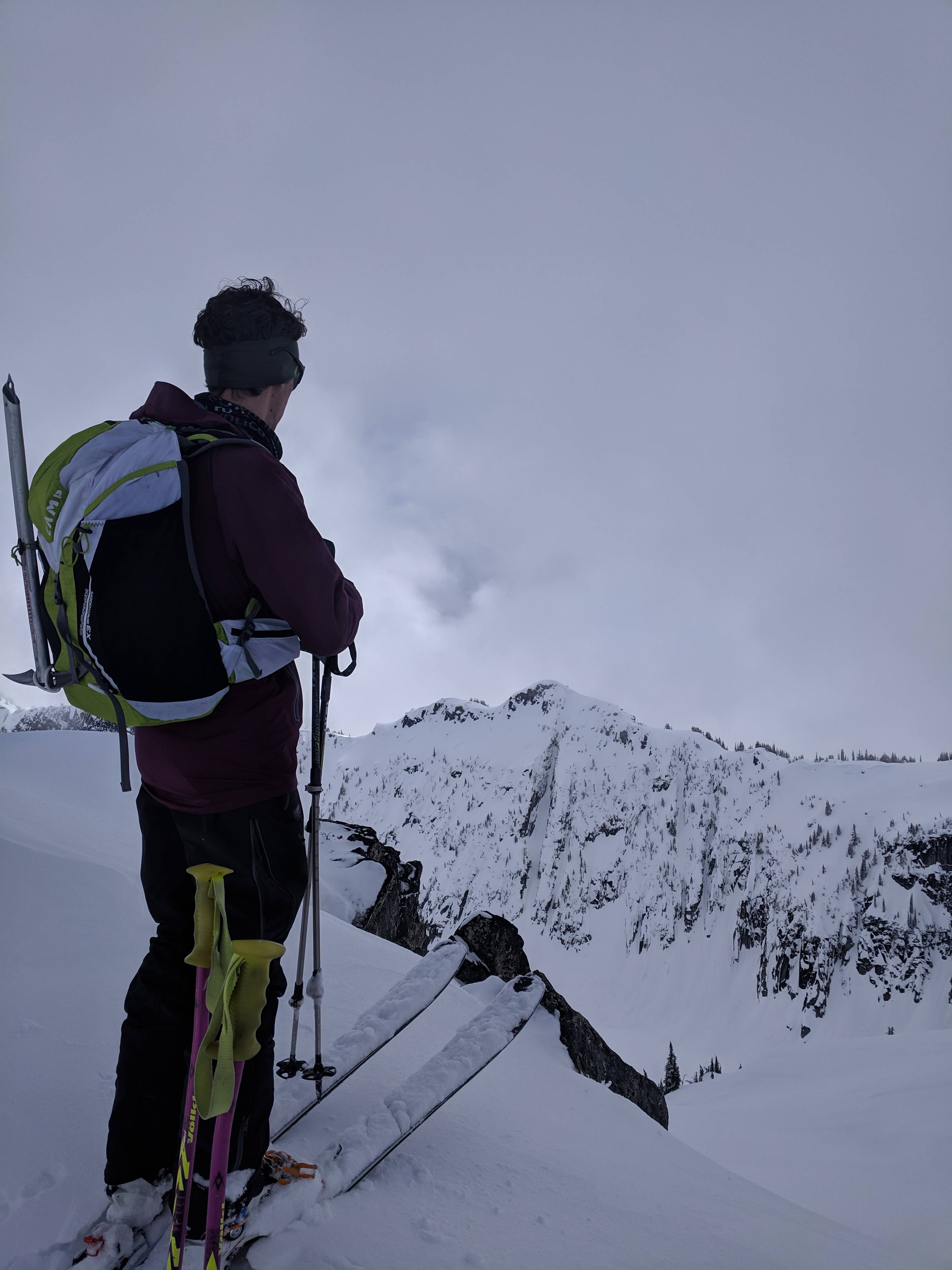 We climbed the gash directly above Ari's right ski tip 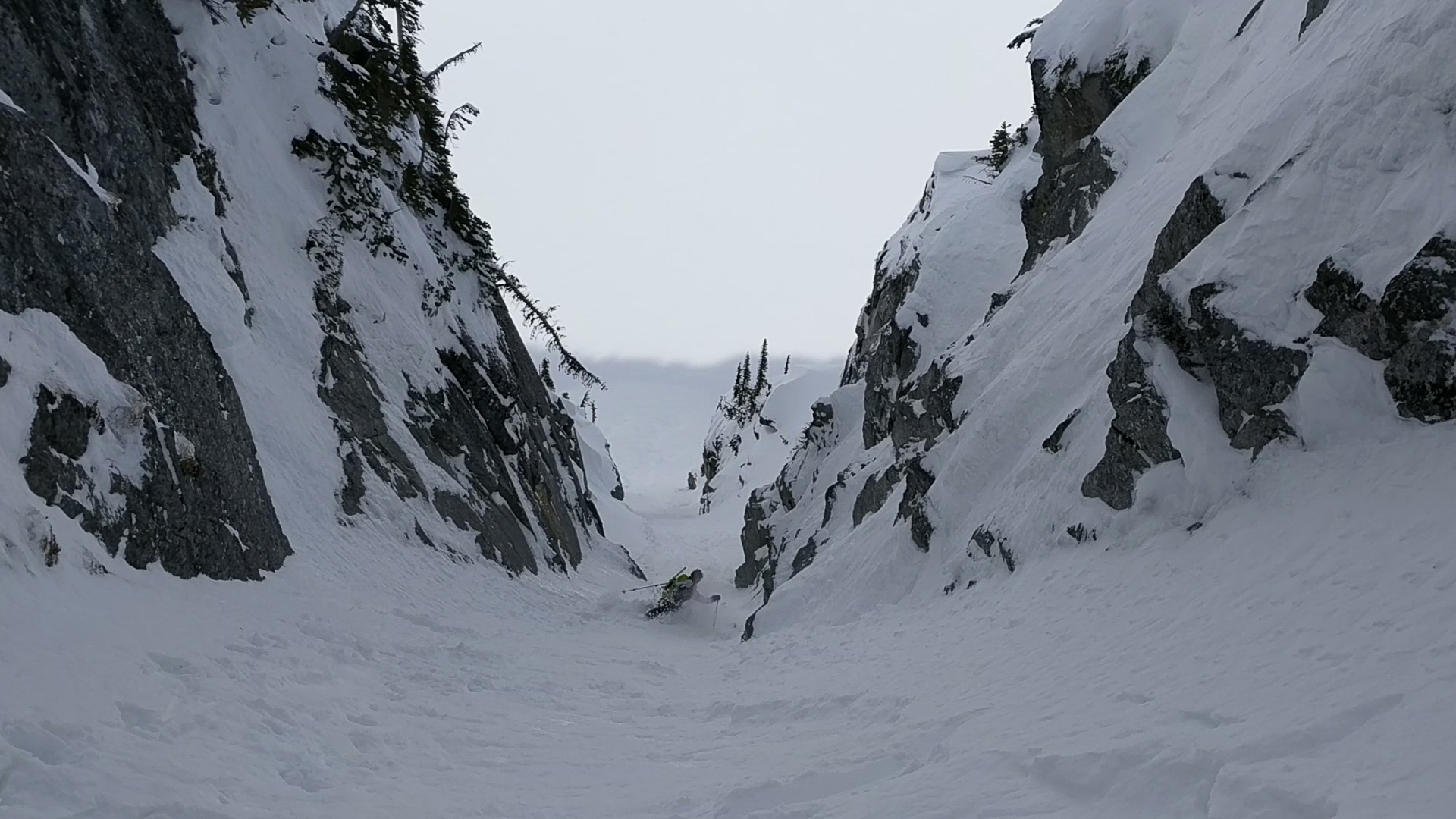 Having had our fill we headed back to the lookout for one last night, and returned to the car early on the morning of the 28th. 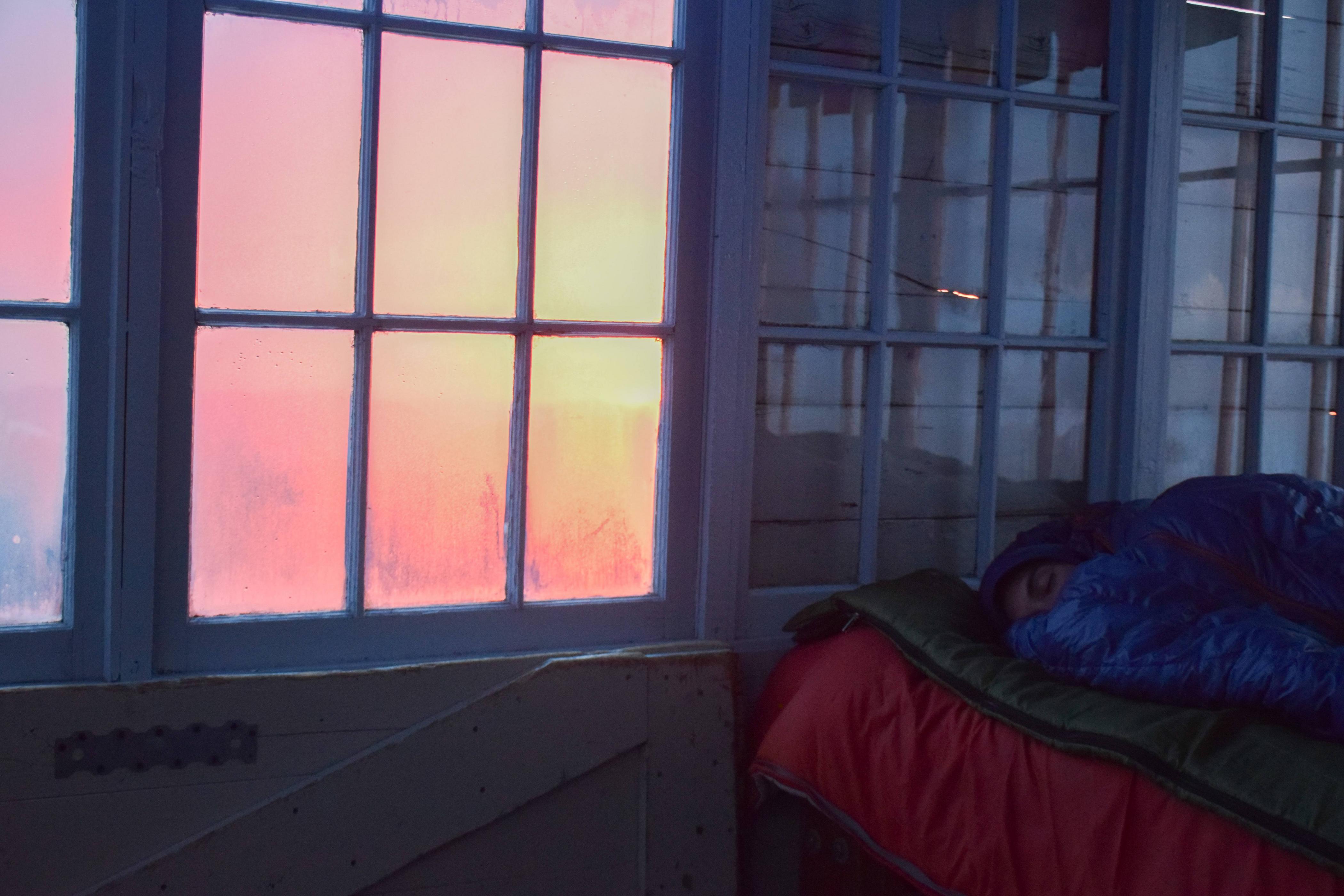 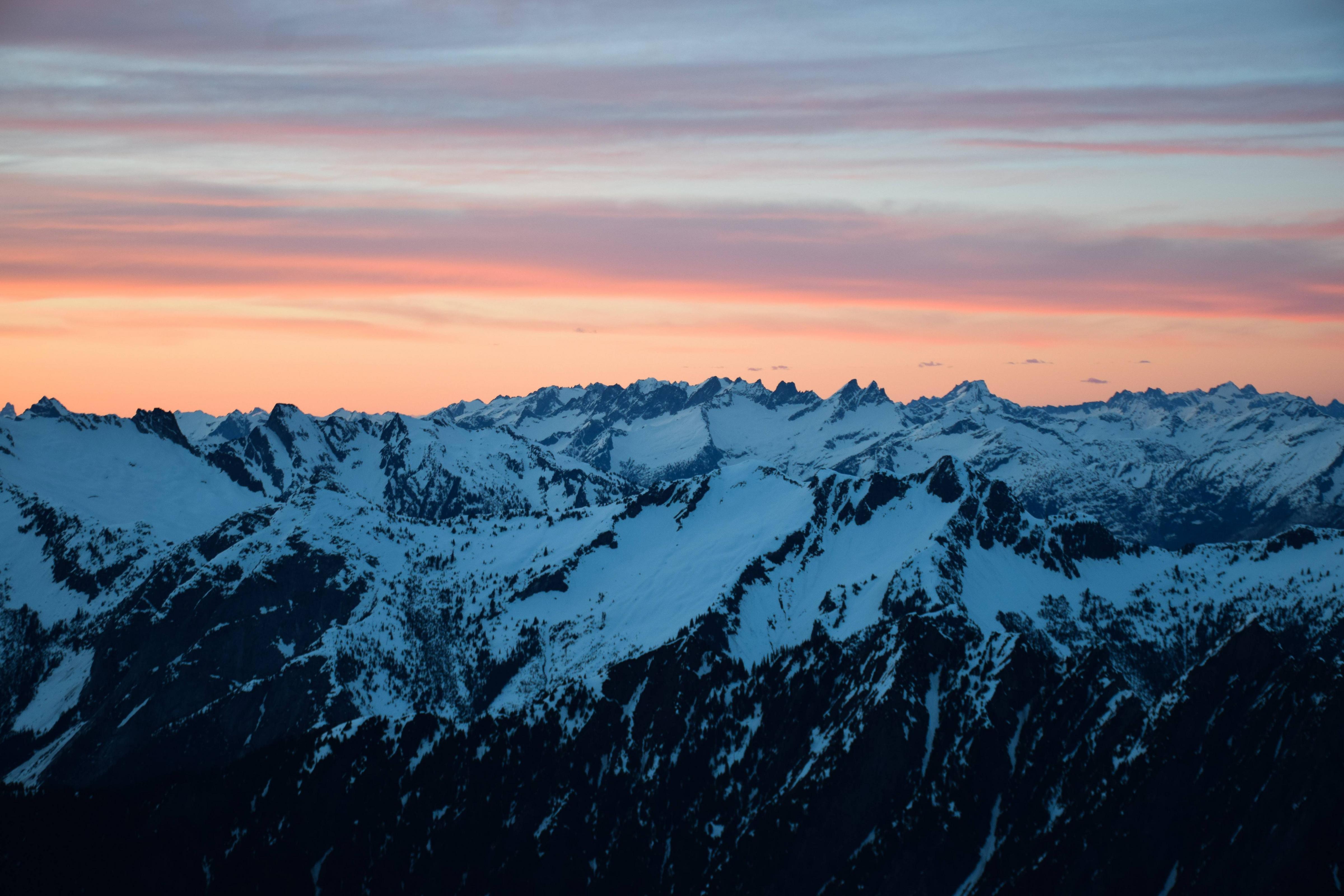 For a lookout that sees such high traffic in the summer it is quite a strenuous and committing trip in the winter, and for that reason sees very few visitors this season. Huge thanks to the Friends of the Lookout for keeping the historic structure in shape for those who can make it up during the winter. Also on the note of stewardship, please hang your food up and pack your trash out if you're overnighting there in the winter! We ended up packing out a fair amount of waste left behind, which makes good food for the hungry rodents we heard scampering about in the night.
4/1/19 9:54pm
kamtron
Nice TR, that looks super fun. Did you perchance scope out how far was driveable down the Cascade River Road?
2019-04-01 21:54:46
kamtron
4/1/19 9:59pm
Bretherton

Did you need crampons for the last bit up to the lookout?

Did you need crampons for the last bit up to the lookout?