Bummed out the Backside of Stevens Pass is closed because of Snowmobiling back there………so I found a friend with a new sled………We had an easy ride up the nordic center Main Line, and then continued within the Stevens Pass boundary and stopped when the Lake Josephine skin track leaves the ski area. It wasn’t all skin track though, as several “snow bikes” had been up there. NBD we thought, until half a mile after the Alpine Lakes Boundary (No motorized vehicle’s) the bowl and chutes were still ALL filled with sno machine tracks! Our planned descent routes were 80 percent ruined - as it is April - and the tracks were set up making consistent powder skiing impossible.

We were not going to allow it to be a bad day, so we skinned up a less busy area, on a day old track put in by two riders. Near the top it was Snomo free - until the little tarn, and all the good ski slopes around it. We continued on and finally found clean (but very steep) powder that dropped into Lake Josephine. Lucky for us, conditions were very stable, allowing us to ski what was too bold for the machines to ride. It was a fine (but wind and sun affected) line. On the steep skin out, sleds showed up and were busy spinning around on Lake Josephine, accessed on the easier south side.

We knew our routes of choice back out were trashed, but still ended up in a Snomo’d Gully. We crossed the tracked out flats and headed for some trees and a ridge above a drainage. Great route finding (pure luck) led us to a perfectly pitched semi open run all the way down to the road! No - you can’t have the track…

We had a good day - that could have been great - if not for the Machine tracks through Federal Wilderness Lands. Does anyone care? Is the non motorized law bullshit and unenforceable?  The tracks go away and no damage is done anyway right?

I have been an avid fisherman most of my life. Puget Sound, Rivers, Creeks - even Ocean Waters on vacation. I speed, do dangerous sports, break some laws…But I have always followed the Fish and Game Regulations! I fish at certain times of the year and day. I fish on certain bodies of water. I use the prescribed number of hooks (even when miles away from a Game Warden) I fish for the right fish, of the right size, in the right way! And I only keep what is allowed.

What is it about Snowmobilers that makes them think they can go wherever they want? I mean really…These guys fish and hunt as well! Look at them! They wear Camo! I doubt they break every law on the books. They are probably as law-abiding and honest as me. Except for where they ride…

Now is when someone would say “It’s just a small amount of law breakers”………………..Sorry you can’t say that - look at the pictures. They weren’t made by one bike. Right across the valley there are hundreds of acres for them. All kinds of fresh tracks! But here they are…. 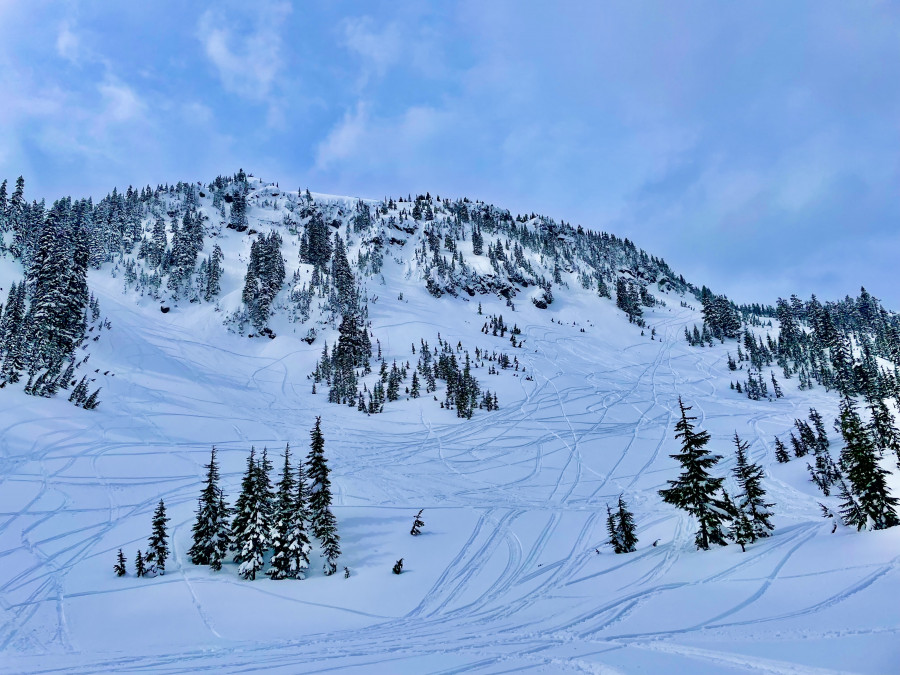 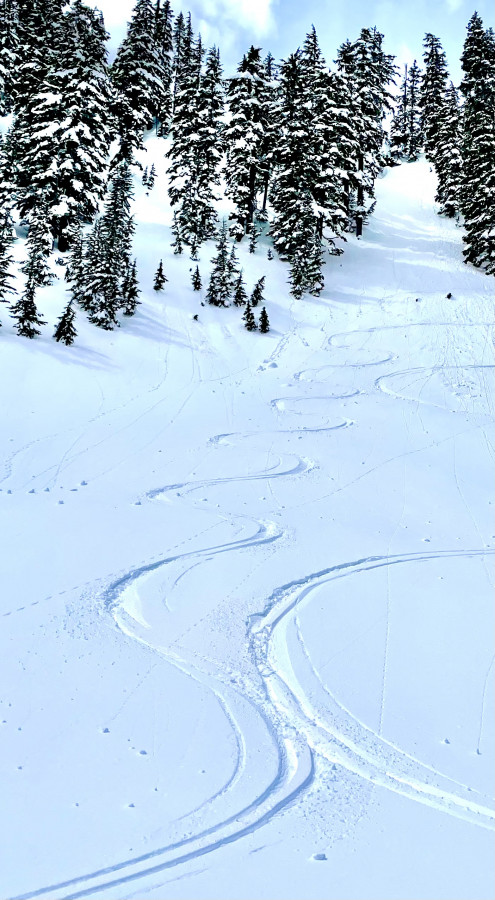 Skin out of lake

Under normal powder conditions this slope was really too steep to be stable much of the time. 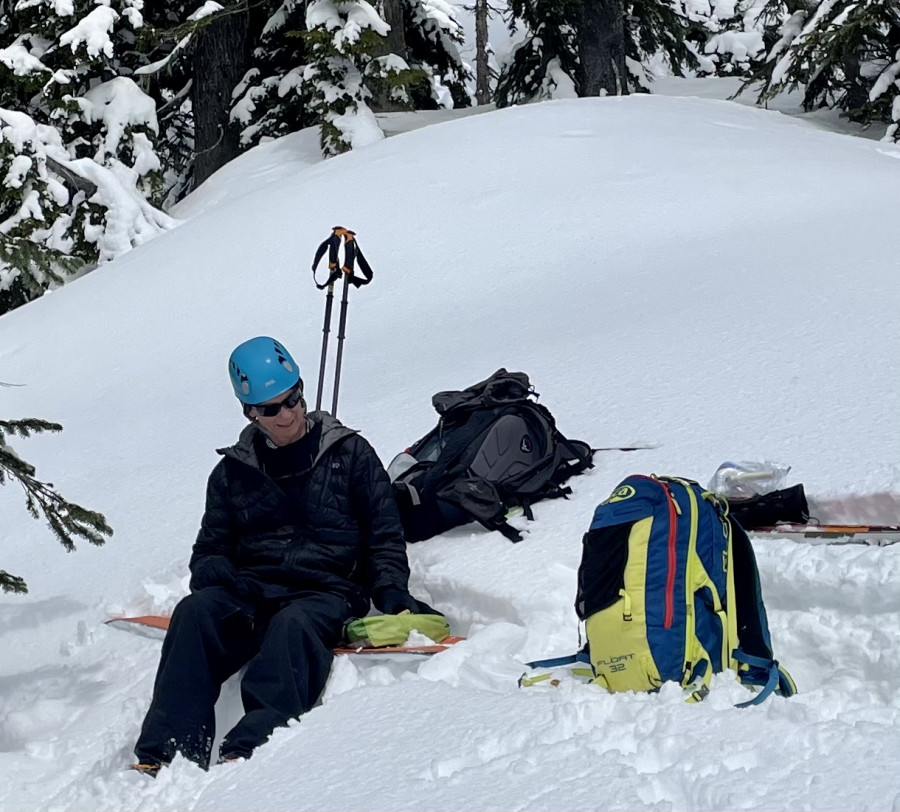 The FS LEOs used to post up on sleds at the wilderness boundary near Josephine on opening weekend, probably no LEOs keen on sledding currently or it's fallen off Wenatchee River RDs radar entirely. There is at least one wilderness boundary sign on the skin up to Susan Jane that I know of, but most sledders probably don't even realize that it's off limits as its probably not on the sled route. It is sort of up to the FS to do better with enforcement or signing for this case.

Either way I want to see some high marks on the hanging snowfield... come on sledders.

A few years ago I saw a video of a helicopter tossing a bomb on that!  Massive!

Yep, what is it about snowmobilers in Mill Valley?!?!??  I’ve skinned up Tye Mill / Skid Road after the Stevens Pass season ended and had to quickly scoot off to the side to not get run over as snowmobilers came flying over the crest going down Skid Road and into the front side of Stevens Pass resort. It is VERY CLEARLY MARKED … absolutely no snowmobiles !  Not only breaking laws, but extremely reckless and dangerous.  Definitely need to post LEO’s and confiscate their sleds when they do that!

I could see snowmobile tracks up the Roman Wall to the summit of Baker on Sunday from the West.

I guess Law Enforcement doesn’t care?  What if I send them the pictures? Seattle Times? I know an old guy who used to ski all sorts of peaks in Wilderness areas but gave it up cause always tracked out and wrecked. Would Inslee care or would it just be the Feds?