Kautz Up, Finger Down

Thomas, Matteo, and I originally intended to climb and ski the Success Glacier Couloir, but received a report that penitente formations rendered a ski descent of the route highly unpleasant. After some hesitation we decided to continue anyway, and departed from Paradise on Friday morning. While ascending the Wilson Glacier we received continued reports of the Couloir’s rough condition, and decided to attempt a different route instead.

We spotted a pair of tracks on the lower Wilson Headwall, but were deterred by an ominous bergschrund at the base of the route. While resting at the Upper Castle, we found the Kautz Glacier directly overhead appealing, but with the uncertain status of the Kautz’s ice steps, we felt hesitant about the route’s potential for skiing. Our attempts to glean information about the Kautz with our intermittent cell service proved unsuccessful, but we decided to attempt the route the next day. We established camp at the Upper Castle and spent the afternoon drying our gear, soaking in the sunshine, and periodically turning our heads to squint upwards at the questionable route above us.

We awoke at 2:00 a.m. Saturday, and reached the top of the Turtle shortly after morning light began to illuminate the mountain. We found the rock step at 11,260 ft. awkward but safely navigable with some pack shuttling and grabbing onto the webbing that protects the section. Although uneasy about the status of the ice steps, we continued our way up the Kautz Chute.

The first ice step and the middle section of the Kautz Chute seemed skiable, but our plans of skiing the Kautz quickly vanished after arriving at the base of the crux and realizing the precarious condition of the second ice step. Cautiously, we worked our way up the pitch and sighed with relief after reaching the upper Kautz Glacier, pausing to catch our breath and enjoy the remainder of the sunrise.

After roping up we began the long and expectedly miserable slog to the summit. We encountered several crevasses on the upper Nisqually but made our way across them with some careful route finding. After reaching the summit around 10:30 a.m. we transitioned and began our descent, weaving through crevasses and cautiously turning through the firm, uneven snow until reaching the steep slopes above the Nisqually Glacier that lead towards the top of the Fuhrer Finger.

We heard about a steep, 20 foot section of exposed rock that potentially required a rappel, and not having ascended the route we decided to exercise caution and rappel. We ended up spending 30-40 minutes waiting for others to rappel, but realized afterwards that it could have been downclimbed.

After negotiating an exposed bergschrund just below the rappel, we began the exciting and enjoyable descent of the Finger. Towards the bottom we discovered dirty penitentes covering the route and a distinct ski track of clean snow weaving through the Finger.

With the sharply cut ski track and the dozen or so skiers simultaneously ascending and descending the route, this section felt like an inbounds run despite the serious terrain hidden above.

We traversed across the Wilson Glacier, packed up camp as quickly as possible, and clicked in for our remaining descent. We expected to find heavy and unenjoyable slush for the remainder of the ski, but were pleasantly surprised by several thousand feet of blissful corn as we carved our way past the numerous parties making their way towards the base of the Finger.

We heard reports that skiing all the way to Nisqually Bridge is no longer possible, but sticking to skier’s left of the river, we succeeded in reaching the road without removing our skis, a nearly continuous 10,500 foot descent from the summit!

Camp at the Upper Castle 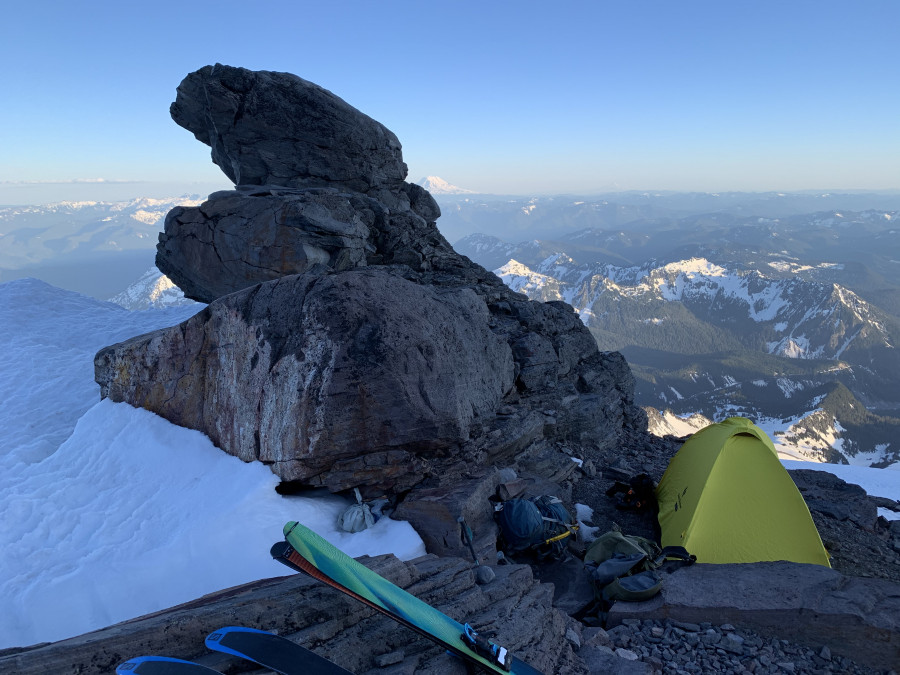 Sunrise in the Kautz Chute 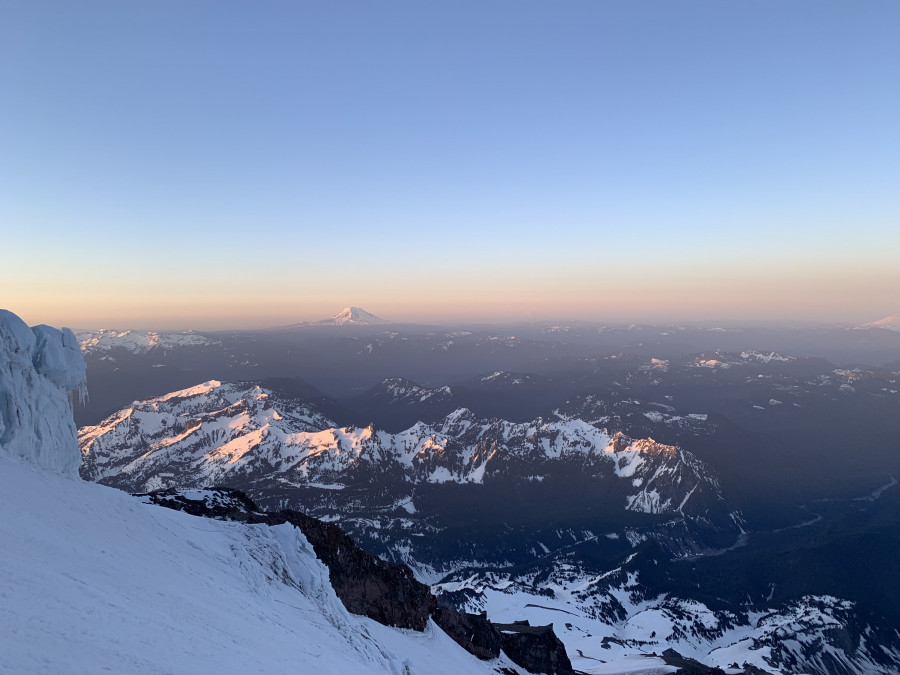 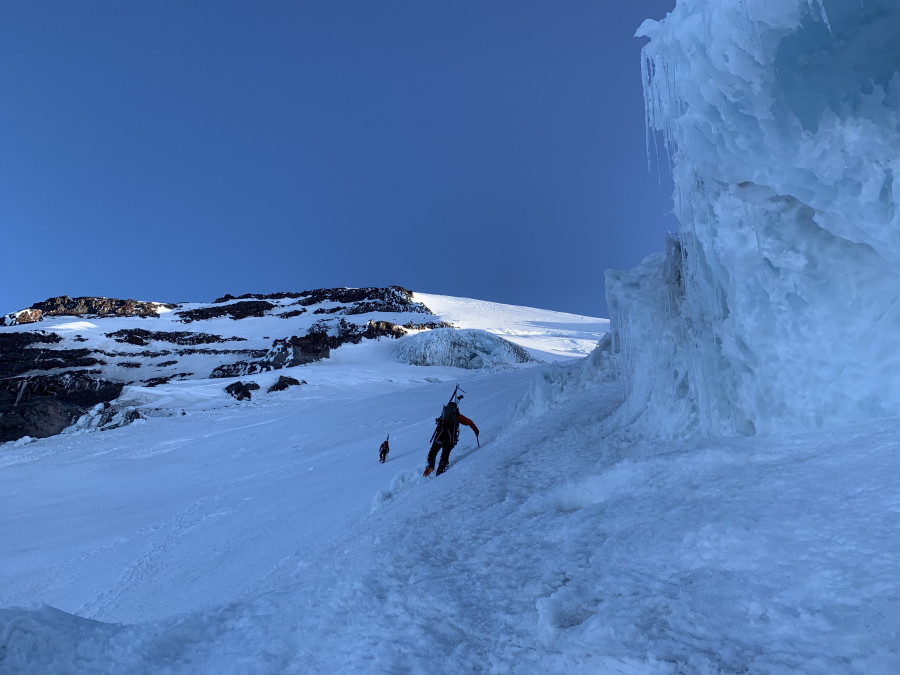 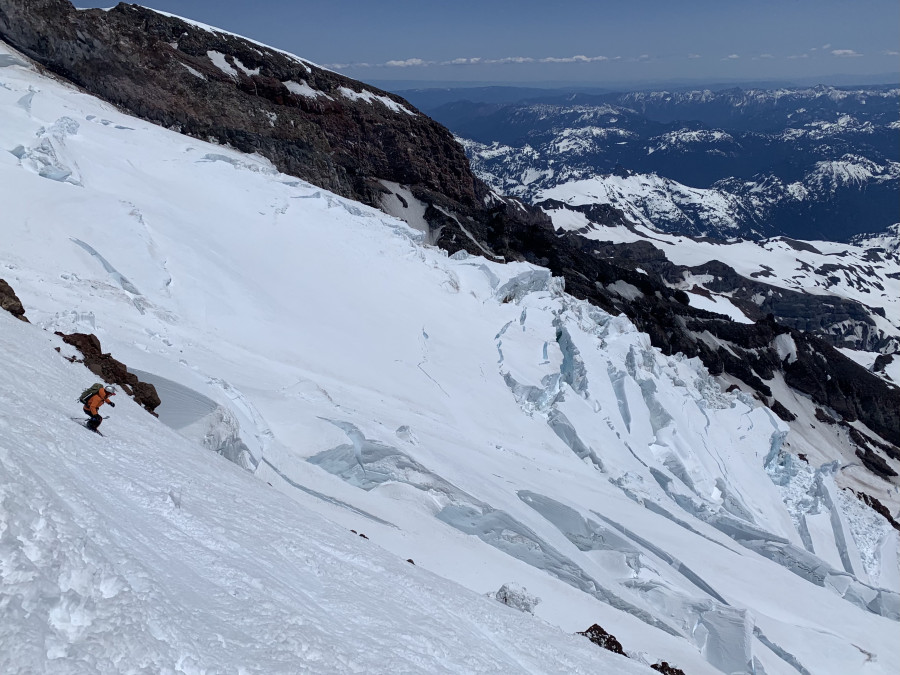 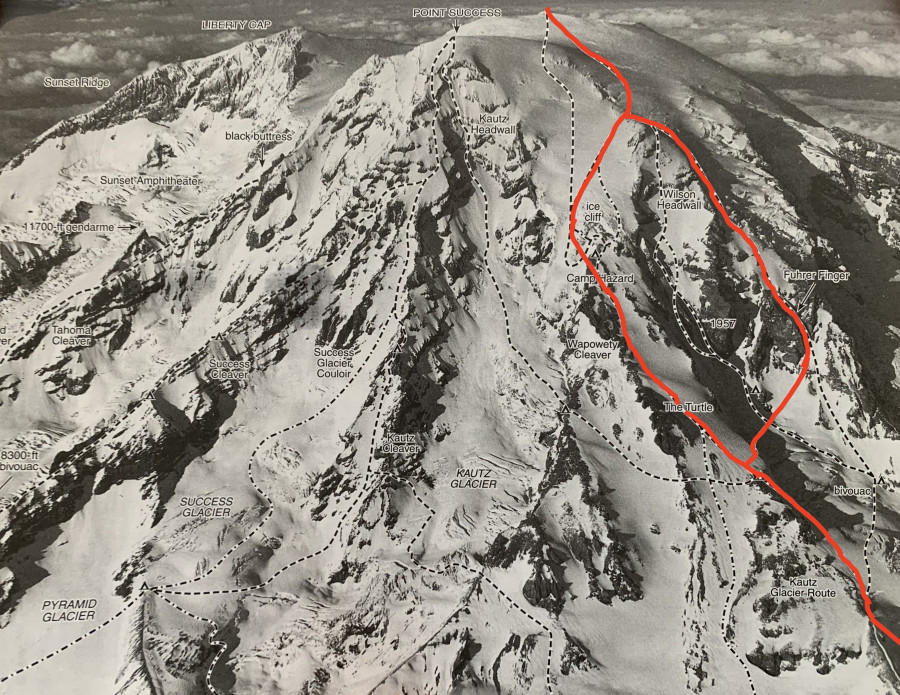 Heard the Finger actually has so many tracks a banked slalom has formed. Boarders, take note.

We were on the success. Terrible conditions. We watched two of a group of four sit atop the kautz for over an hour waiting for the other two. Massive massive ice fall occurred off the upper Kautz while the two in the front were chillin.