I have a group of friends that have been scrambling the North Twin every June since attending WWU, so at least 10 years running, and I'd been joining for the last 5 years (last two with skis). Unfortunately this year I had a wedding the same weekend as their trip, so was bummed to miss out. In the spirit of keeping the tradition going I decided to get up there as soon as I was back.

Since I was solo I decided to make an effort to climb the South Twin as well, something that eluded me last year due to the timing of our N Twin summit rendezvous.

I set off from the Middle Fork gate around 7 and biked the logging road/trail to the climbers' trail. Due to lack of snow it was necessary to traverse some talus to reach continuous snow below the North Twin, which started around 4800'. 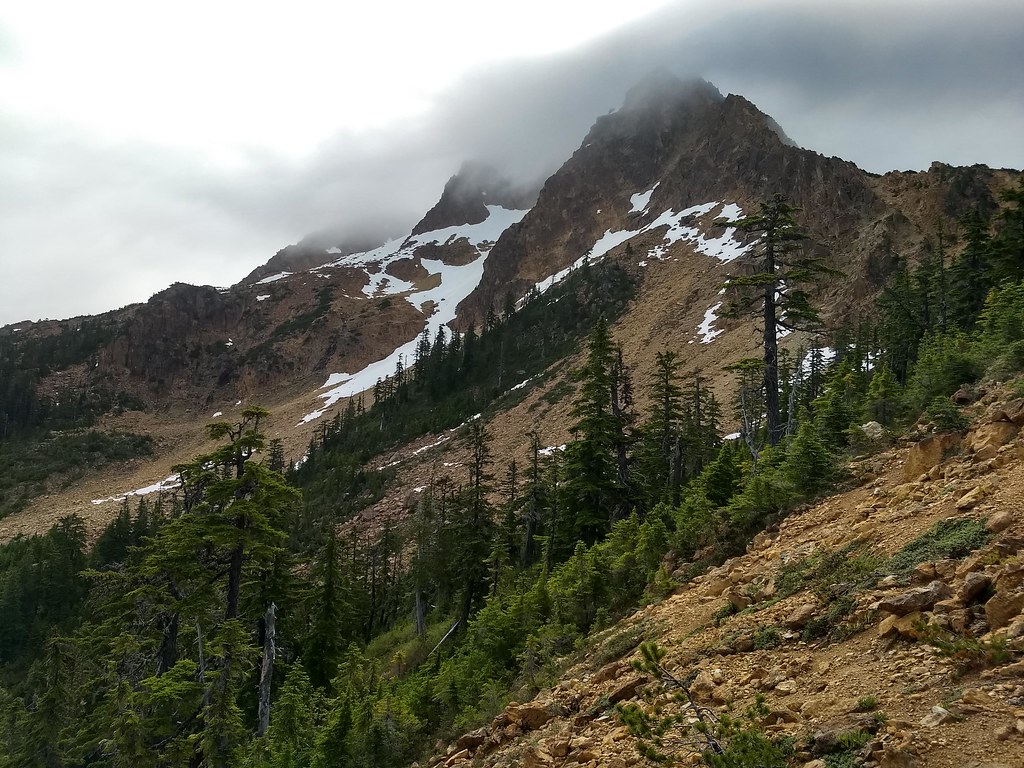 Ascending across the N Twin I was disappointed to see the route I'd used last year to access the Sisters Glacier was melted out. Not particularly wanting to add a bunch of scrambling to my itinerary I decided to settle for just climbing the North Twin and perhaps doing some laps. I was able to carefully skin to about 200' below the summit, where I booted snow and then loose rock the rest of the way. At the summit I was surrounded by clouds, so spent around an hour reading the summit register and hoping to catch a glimpse of the S Twin. 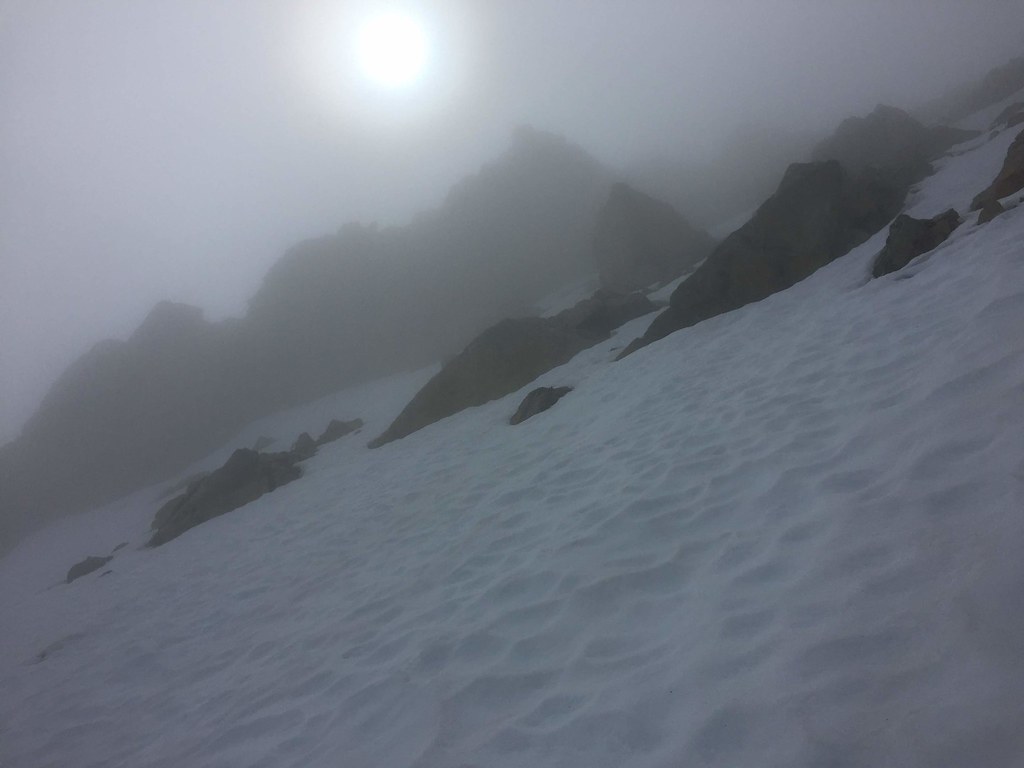 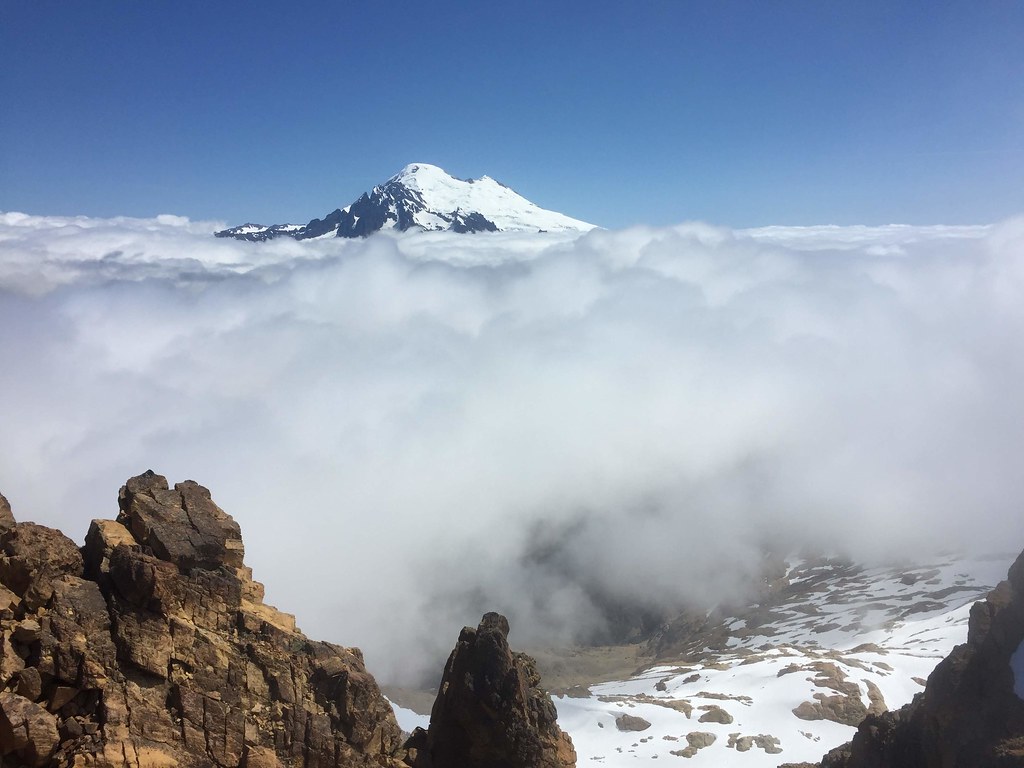 Eventually visibility improved so I started the descent, which required some tricky downclimbing to get back to the snow. The ski down was awesome though and the clouds had lifted, giving me a glimpse of the Sisters' Glacier. On the way down I scoped potential ways down the rock ridge to the glacier, nothing which looked promising. 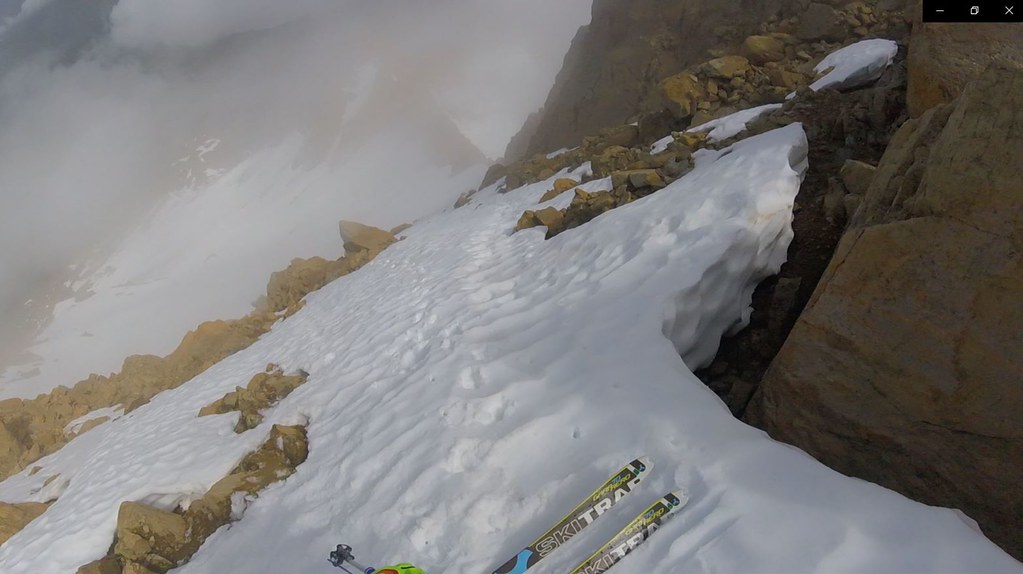 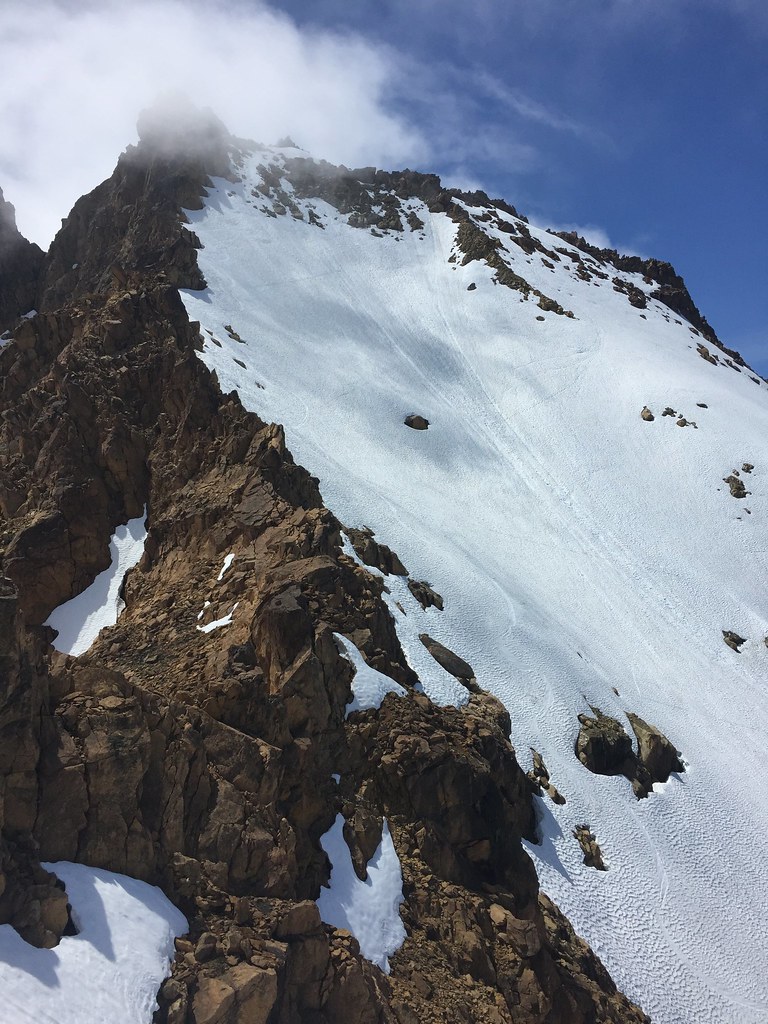 Arriving back at the melted-out access I'd used last year, along with the return of visibility came my motivation and I decided to make a go for the S Twin after all. 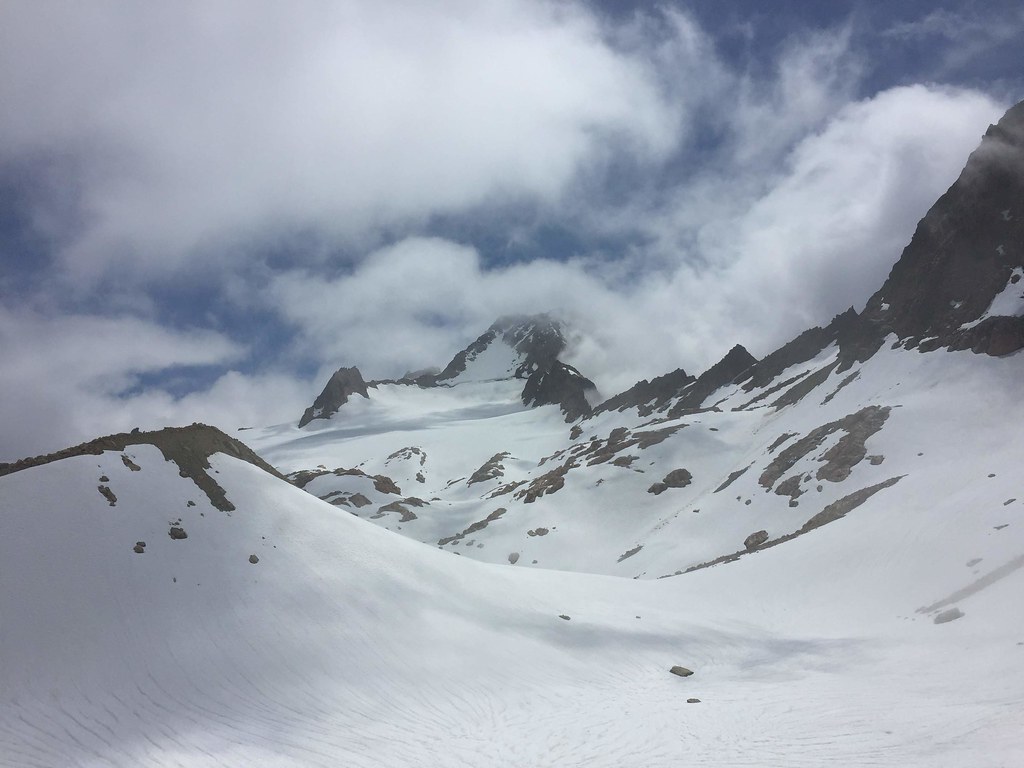 Some sketchy ski boot scrambling and much cussing got me safely to the glacier, where a quick skin to the base of the bergshrund under the N face revealed it was passable using my skis as anchors to crawl up. Booting up the upper slope went quickly enough, though again ended in some loose 4th class mixed climbing that got the blood flowing. 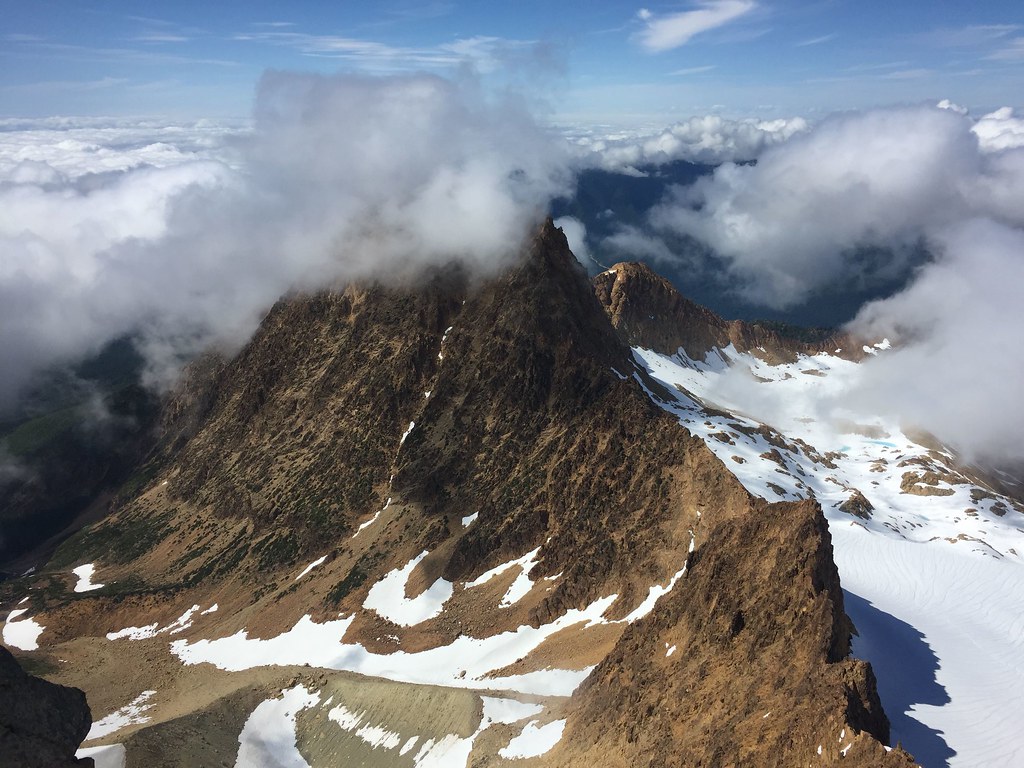 
The South Twin's summit was incredible, far larger than the North Twin's, with a nice bivy site and a very interesting perspective on the North Twin. I explored the summit for around an hour while I let my liners dry, but didn't find a register. The descent down was awesome, a little less steep than the North Twin but the snow was perfect, and using my boot tracks as a reference, I was able to do the little huck over the bergshrund and ski all the way back to the ridge separating the mountains. 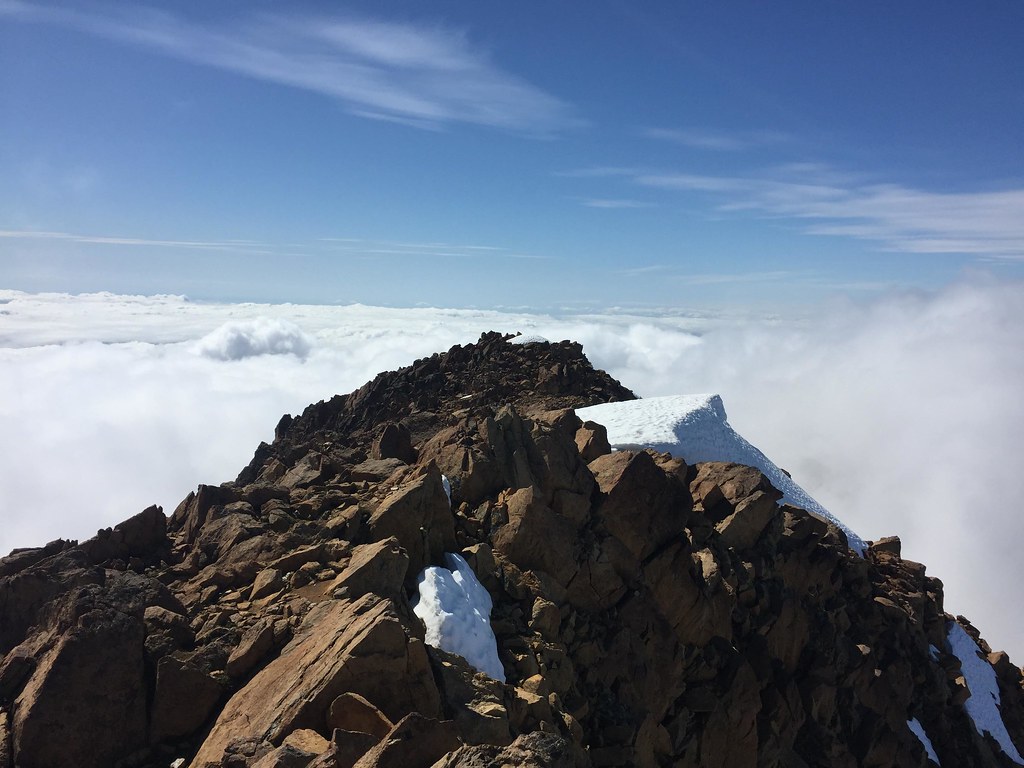 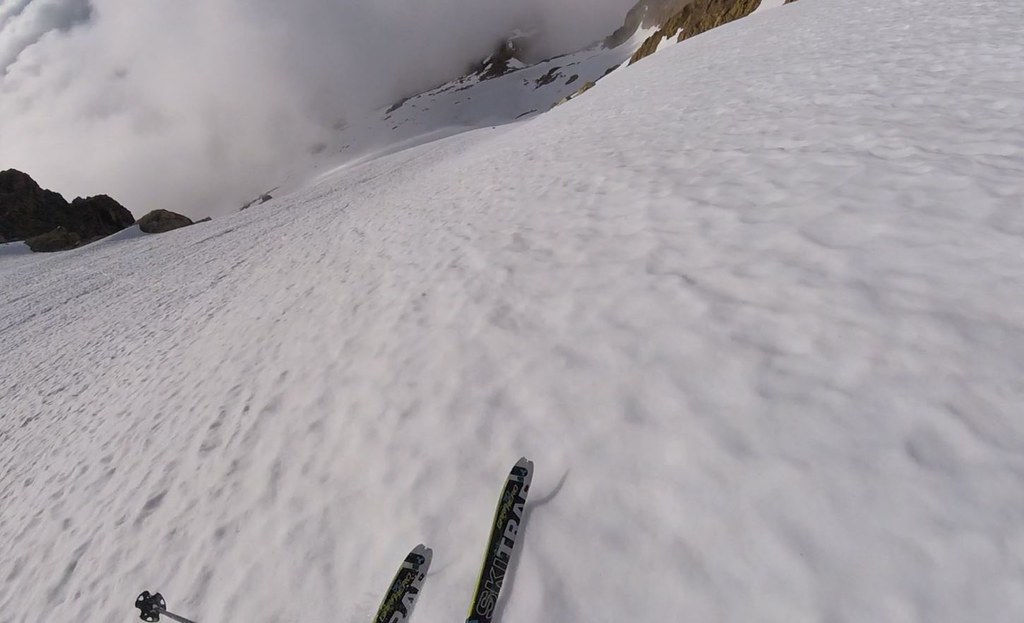 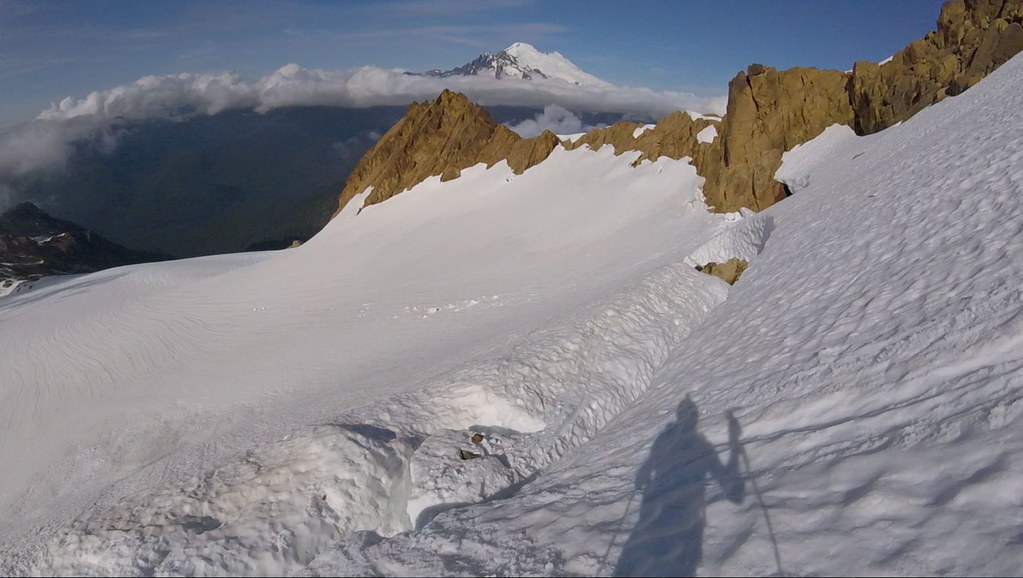 From there I scrambled a different route I'd scouted earlier back up to the N Twin's snowfield, then skied out. The bike down to the car was the last thrill of the day.

Very stoked to finally have made it over to the South Twin, which sits above an incredible basin. I'm finally learning the tricks to the approach and hope to explore that area more next season, maybe even go for the full traverse if I find some interested partners. (hint hint!)


Conditions: road is perfect, trail is good, snow is great but no longer reaches either summit. Two minor runnels on S Twin but N Twin is just about perfect still. Better enjoyed with more snow but the skiing won't disappoint right now.
6/22/19 6:14pm
Jason_H.
I tried the traverse and failed due to terrible snow. The road issues are a pain for the exit, but I've got another idea! I still haven't gotten to s. twin!
2019-06-22 18:14:20
Jason_H.
6/24/19 6:00am
mikerolfs
Love this one! You are getting it all!

Indeed, it seems like the exit is a big mystery except that it's a slog. I hope to make a motorcycle trip to explore the logging roads this summer/fall and figure out the best escape option.