For the past week or two, I have found the weather forecast to have a huge amount of variability - maybe it's just me? We had a tough time coming up with a plan because each time we checked the weather it seemed like it had changed.

Anyway, Ryan and I saw what we thought was a weather window Feb 7-9 and started drumming up plans. As NWAC started discussing the PWL it became more apparent that our plans were too aggressive for our avy risk tolerance. Additionally, the “weather window” was looking more like not a weather window.

Oh well, we decided to scale back and head to the Eldorado zone over two days. Early Monday morning we drove from Seattle and made it just past Hard Creek on Cascade River Road, at which point my little 5-speed ’05 Ford Focus couldn’t quite push through the snow, even with chains on. We discussed our options and decided to bail for Hidden Lake Peak in search of low-angle pow.

We parked on Cascade River road at the turnoff for FS 1540. In hindsight, we probably could have driven up to ~2,200’ but we didn’t love the idea of digging the road out again to turn around in the snow. We put skins on at the cars, which required a couple short sections of dry skinning. At 3000’ we left the road and started up the prominent WNW ridge. This was pretty crusty with low snow coverage. However, things steadily improved and by 4500’ it felt more like winter. The ridge tops out around 5700', and we dropped our overnight gear on a small knob just above treeline. From camp, we wound our way to the summit - Ryan did a great job route finding in less-than-ideal visibility. We dug a hole on the summit and waited for a break in the weather to make our descent.

The snow from the summit to ~100 feet down was chunky and wind scoured, but below it was smooth pow. We decided to ski back down to 4500’ because vis was much better in the trees.

On Tuesday, we woke up to much better vis and even some fresh snow (maybe 2"). We spent the day lapping off the summit, skiing excellent pow in an incredibly beautiful alpine environment. This is what dreams are made of! We tried to get onto the NE aspect of Hidden Lake Peak, via the North ridge, but could not find a route that felt safe to us, partially due to very flat light on that aspect.

All in all, this was an excellent Type 1 fun tour that we felt utilized low-angle terrain in the alpine to mitigate the current PWL avy problem. There are some slopes great than 30 deg. below 4000' on the ridge, but currently the coverage is poor on those slopes. 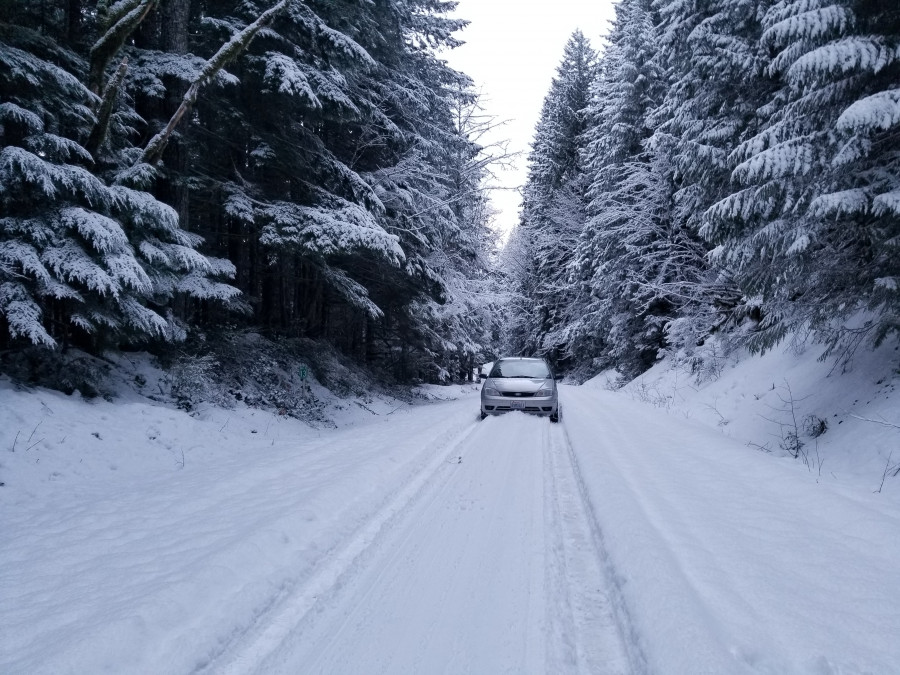 I kept high centering. I think with a car that has decent clearance you’d be fine. 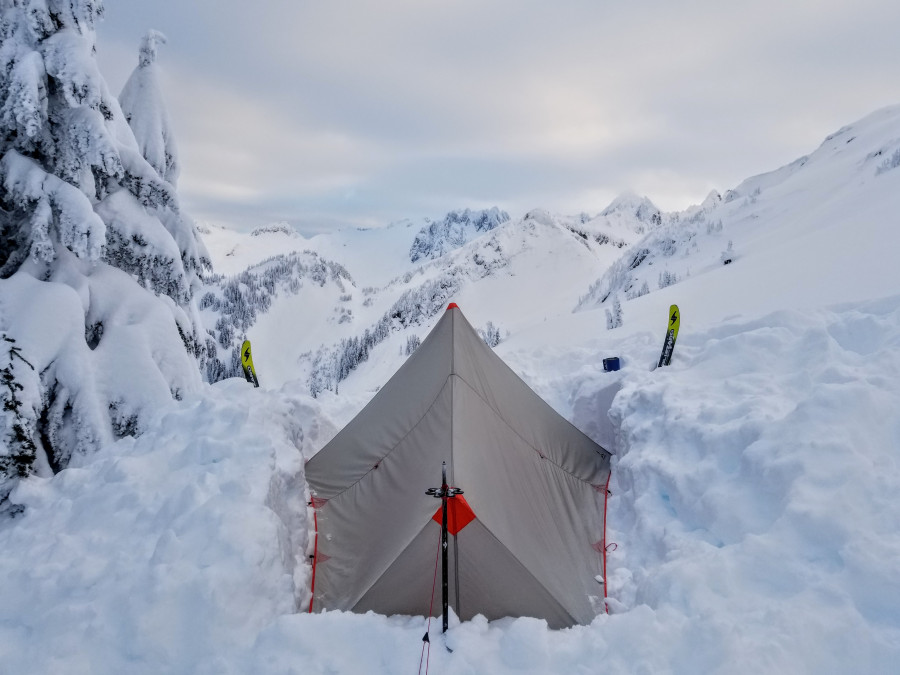 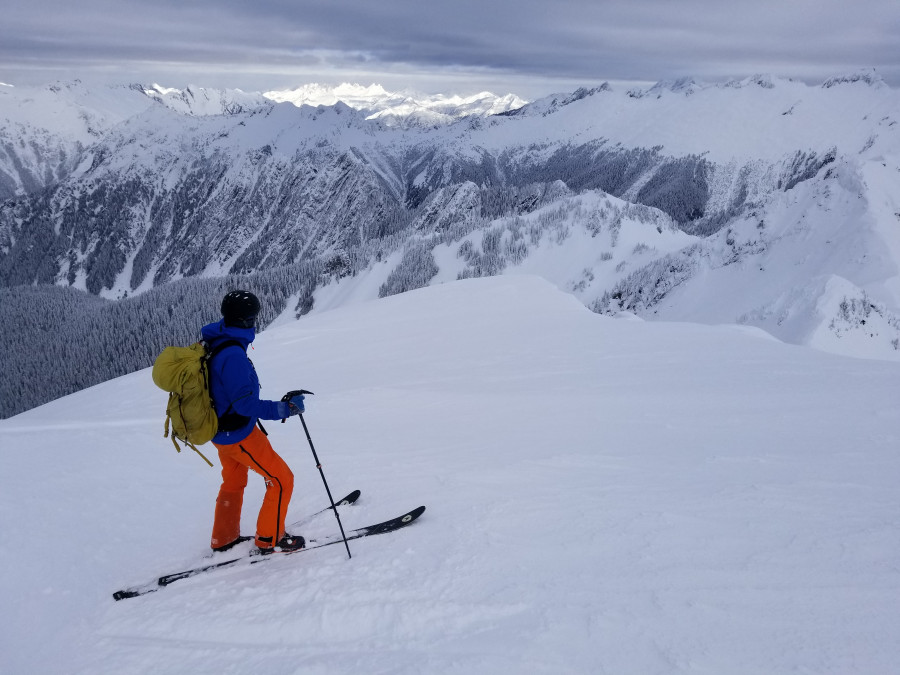 The Pickets showing off in the sun 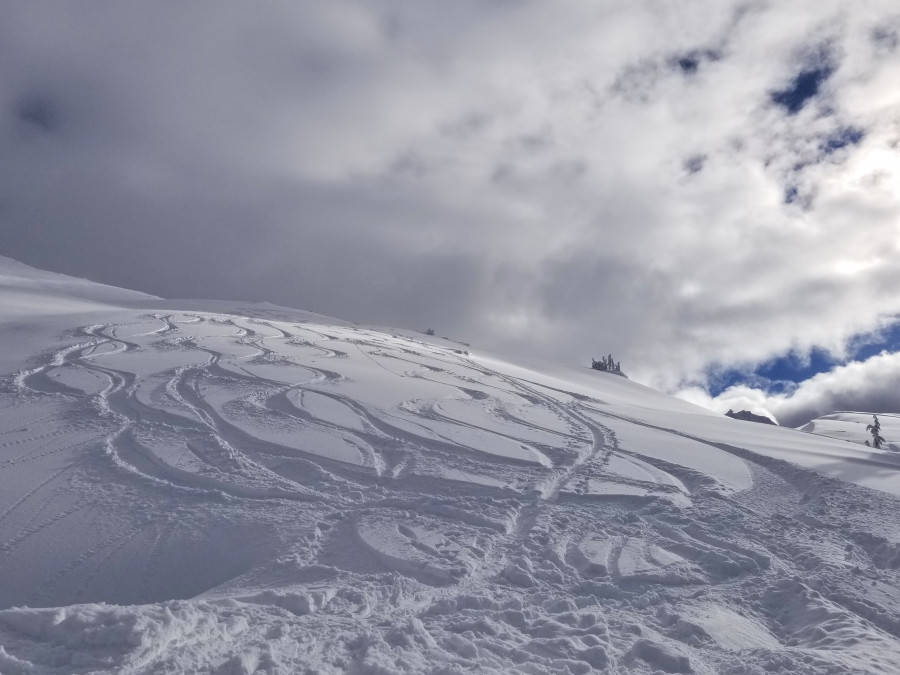 Terrain just above our camp 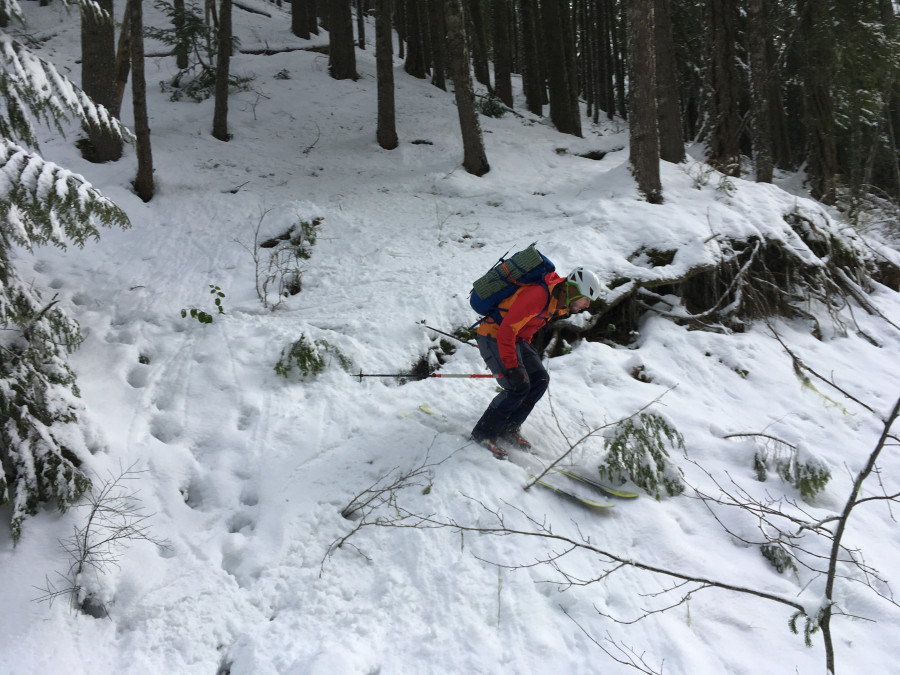 Looked great. Way to find something fun and powdery, but still on the low angle side.

This is cool. Chops to the Focus + chains. I always had the impression that the approach to Hidden Lake had some overhead hazard, but obviously I know nothing. Happy with the decision you made to go up there in retrospect? Did you travel in trees rather than the summer trail to mitigate? Thanks for any tips

We felt happy with the route we took; it minimized exposure to avy hazard, but did not eliminate it. The trees are spaced pretty wide in this zone, primarily we stuck to lower angle slopes in the trees.