7/19/08
WA Cascades West Slopes North (Mt Baker)
8151
6
Posted by danhelmstadter on 7/20/08 3:08pm
Left the parking lot (3700') around 10 am, contemplated the shwack option, but quickly dropped the idea. The "bridge of death" did not live up to its name. There was a lot of downfall over the trail, big trees everywhere - uprooted or snapped mid truck, must have been a hell of a storm. I met the trail crew after working diligently with axes and handsaws a mile or two up the trail.
I must have taken the Coleman Glacier overlook trail, but continued up when I realized my mistake. It immediately put me in semi-complex crevasse terrain, rather than the easier traverse from the regular trail. Higher up - I did find some boot tracks, which made the negotiation of the Coleman much easier psychologically, even though I did end up taking some of the dead ends that the original boot packer made.
The bergshrund entrance to the North Ridge was easy, and should be in for weeks. The snow was not too slushy, or hard, but there were numerous runnels and rock craters on which continued till halfway up the slope. There was only one instance of small rock fall, but it was high speed. Above the initial slope, the angle decreased but the snow became mixed with ice, and various crusts. I traversed over to the Ice cliff, weaving through a few crevasses, dodging larger rockfall then donned my crampons a little below the ice cliff.
The first bit of ice was dirty, and relatively low angle, I used the force, and traversed over to the climbers left of the cliff arete, where I found shade, and much more exposure to the Roosevelt ice cliffs below. The traverse was about thirty horizontal feet of fifty degree ice, but the pitch steepend as I started to ascend (no protection) to about 65 degrees near the top. I took it slow... There was about 60 v-meters of this ice, which was mostly good quality, but it did have the occasional rotten pocket.
Above the ice step I found beautiful softening snow slopes of varying angle all the way to the summit. I met Emir from Canada on the summit, he said he took the bushwack and thought it was worthless, he also mentioned that he was able to skin all the way to the summit via the Roman Wall. I noted the icy condition of the Park Headwall, which I had hoped to tag too.
After skiing around several large crevasses in the summit area, I encountered a little icy section (crust ice) which I sidestepped. Then sublime corn turns down to the ice step, absorbing views of soft late - day's warm summer glow filling hazy valleys and reflecting off the nearby Puget Sound and lone jagged Canadian peaks poking through the golden brume.
I skied to the edge of the snow... Donned the crampons, and descended. The downclimbing was more difficult than the climbing, I had earphones with me, and bumped some mellow Reggae to cool the nerves. I took it slow, feeling every point placement. No close calls or panicky feeling luckily.
Returning to the snow, I clicked on the skis, and descended the snow/ice/snice. The skiing was poor through this section, but it was not to long. The lower snow slopes were ripper corn, with the exception of the lower half of the slope which was moderately runnelled.
It took a while to weave through the Coleman glacier to the trail, but there were some good turns in this section as well. The sun was getting low, but I made it back to the parking lot in time to sip a beer while watching the pink alpenglow bloom and fade. 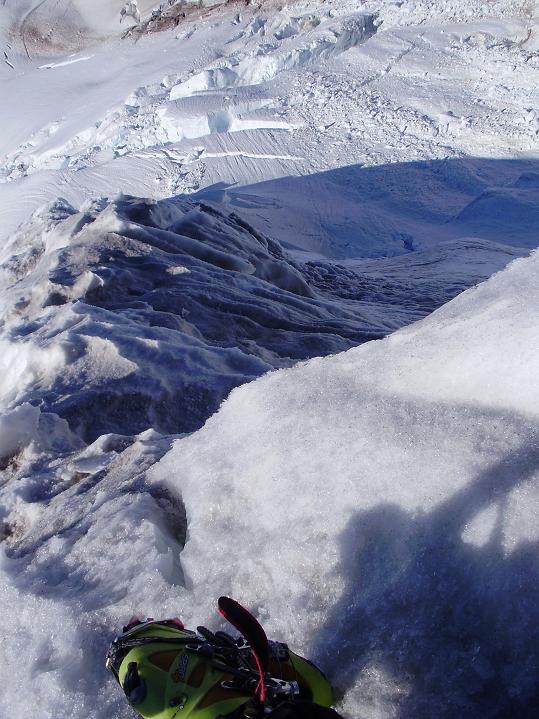 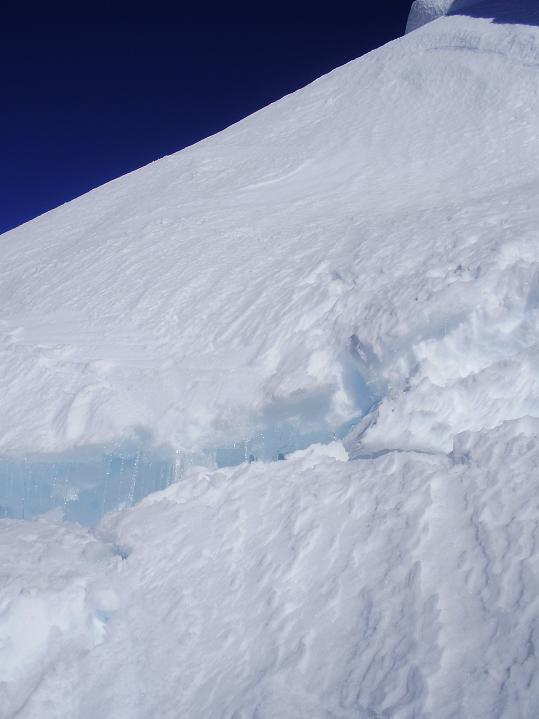 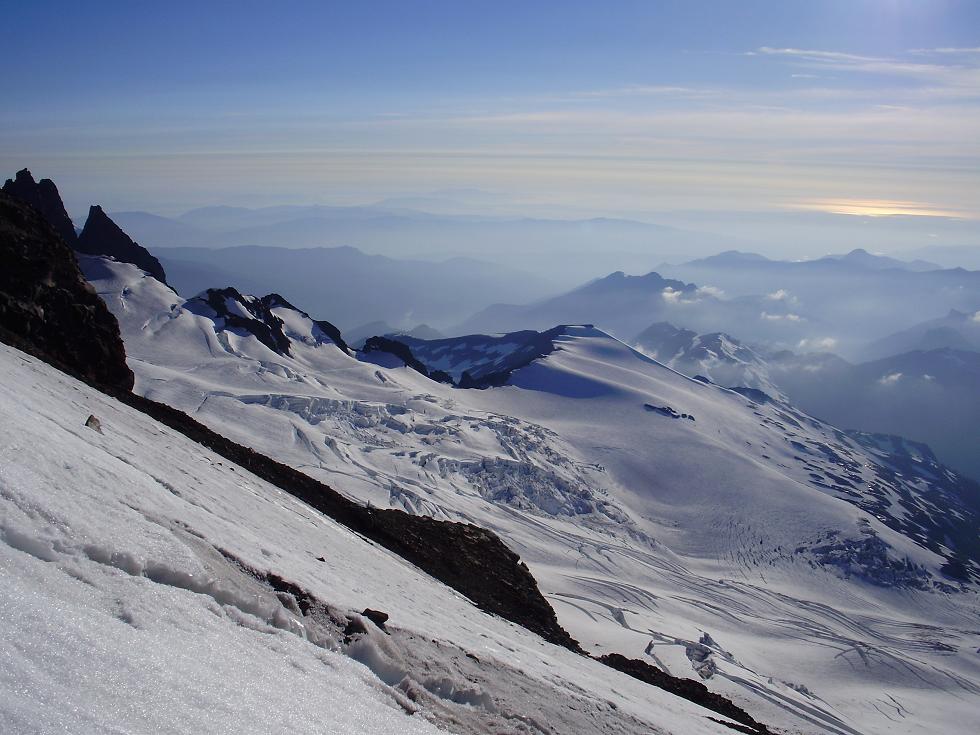 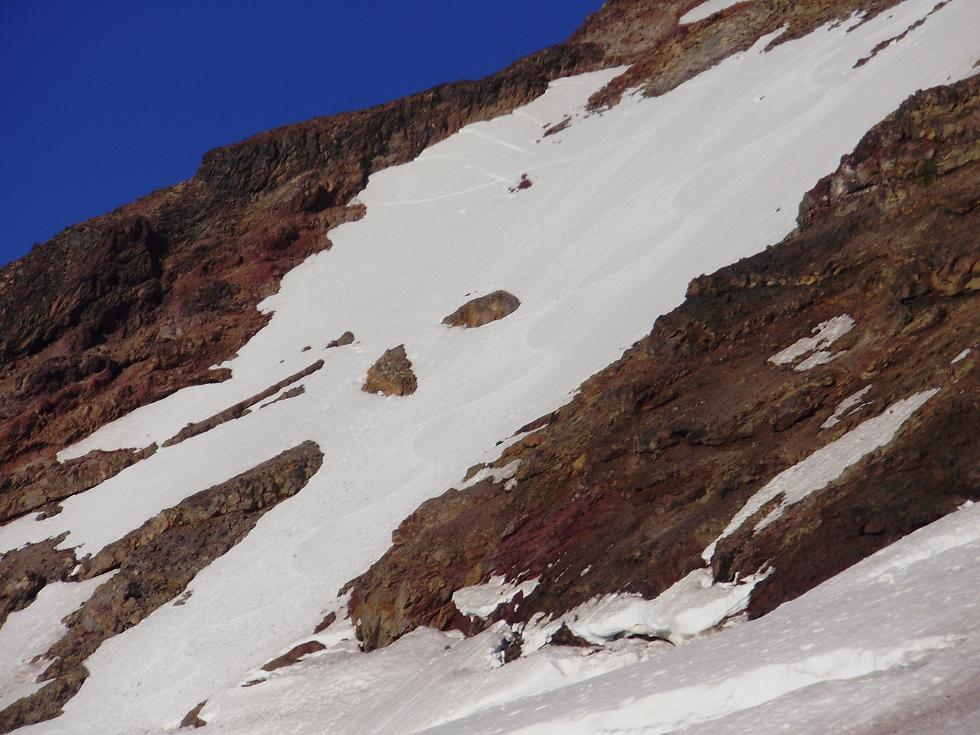 7/21/08 12:02am
oyvind_henningsen
It was nice to meet you up there Dan.  When we saw the ski tracks down the N Ridge we were guessing who had made them.  Asking another party on the N Ridge route who had seen the skier shredding by their tent if the skier had a beard or not, our strongest suspicions were confirmed that Dan the Man was the owner of those lines.  Last time when I climbed the N Ridge (with Monika) the icy section you downclimbed had a lot of snow on it and was totally skiable.  Again, great job.
7/21/08 1:15am
salal
Nice!!
7/21/08 10:53am
ryanl
Pretty cool Dan. It would have been fun to hook up, but I'm glad your weekend turned out so well. Your dog was probably psyched as well :)
7/21/08 12:41pm
gregg_c
Great ski Dan.  You have been a busy camper since Monika and I ran into you on Rainer.  Give me a shout if you want to have that beer or need a place in Bham to chill and relax for a day or two.
7/21/08 2:30pm
lisa
Dan, I saw your camper in Maple Falls and wondered if indeed it was you.  I thought you were going to Ten Peak with Ryan and Monica.  I should have stopped to say hello but was catching up with Amar and Victor.
Great TR, nicely done climb and ski!