I had an experience this past weekend that I wanted to share and get other opinions on. This is a long post, but I feel context is important.

My partner and I decided to go check out the north chute off Mt. Ellinor in the Olympics on Sunday. If you're unfamiliar, it's a gem of a line that drops 2000' just below the summit. You approach as for Ellinor, which is to say you don't get an opportunity to climb the line and instead have to assess from the top. Given the sunny forecast for the day and the fact that you have to climb out of the cute and then return to your car via south slopes, we started early, getting on top of the chute by 8:30AM. It was clear that there had been significant wind transport into the chute, but it was also clear that the upper portion had seen more sun than we expected for a north aspect. The end result was the entrance and first third appeared quite firm. Good for stability, bad for ski quality. After talking it over, we decided we felt comfortable and dropped in. As expected, the first part (low 40 degree) was very firm and would've resulted in a long slide if you lost your edge. Lower down in the chute we found nice chalky snow, and the bottom portion and lower bowl was similarly frozen as above. After skiing about 1200' (wasn't worth it to continue) we skinned back up, eventually transitioning to kicking steps for the last ~500 ft.

As we were approximately 50 ft from the top, I felt some small chunks of debris hit me. I looked up and saw a skier and snowboarder at the very top of the chute. I was pretty sure they could see us but nonetheless I yelled, "hey!" by which I hoped they would get the message to not descend and kick down anything on top of us. As we continued booting up the last stretch the lead skier began do descend. Now I yelled, "hey! Please stop." The skier made a few more turns toward us, so I raised my voice more, asking him to wait for us to finish climbing out. I probably used an expletive. He did eventually stop, and again I repeated, "can you just give us 5 minutes to get out of your way." To which he replied, "it's crumbling, who cares. This is just like trying to ski the zipper last weekend." Now, I assume by 'crumbling' he meant to indicate that there was very little avalanche hazard and we shouldn't be concerned. And I also assume his reference to the zipper was about skiing down past other parties climbing up the route and his frustration about similar attitudes on that line.

After we quickly booted the last section, he resumed his descent, with his snowboard partner behind. Still quite firm, we watched them begin to ski simultaneously, and saw the snowboarder lose an edge twice, sliding on his butt but able to catch himself both times. Last I looked they had stopped halfway down and the skier was chastising the snowboarder for slipping.

Personally, I was furious and dumbstruck by this encounter. I understand the avalanche hazard appeared low. But I also didn't think it was unreasonable for me to request a few extra moments to get out of harms way. My main concern was being slid into, less than having an avalanche brought down. Either way, even if the skier above me didn't agree with my hazard assessment, I still thought they would have the courtesy to respect my request and oblige.

Really open to feedback and opinions about what the ethics are in this situation. Is there a difference in a line like the zipper compared to this one? When can climbers request that a downhill party wait? 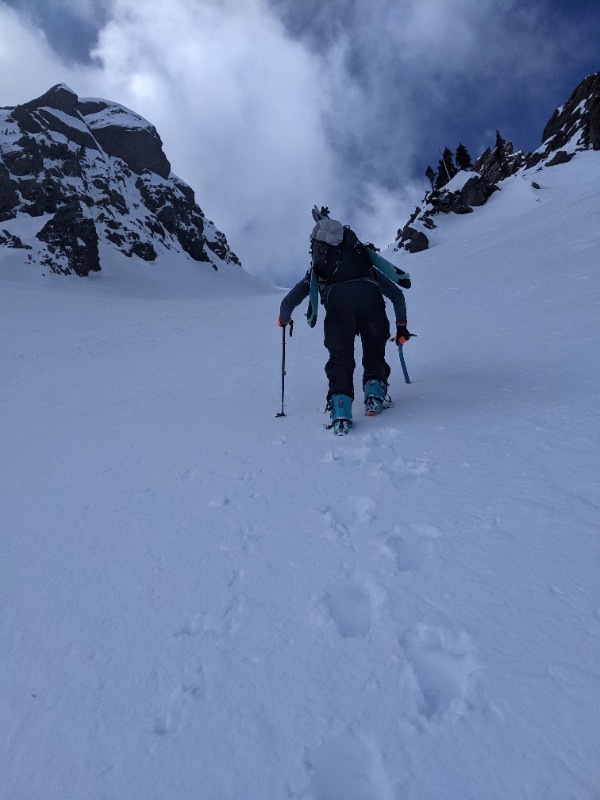 Less More
13 Apr 2021 20:55 - 13 Apr 2021 21:33 #235014 by Lowell_Skoog
Replied by Lowell_Skoog on topic Backcountry Ethics - Climbing and Descending
Interesting story.
There are probably several ways to look at this, but I settle on this question:
Which party poses the greater risk to the other party?
The party posing the greatest risk should yield, especially when asked to do so.
In this case, the descending party clearly posed a greater risk to the ascending party,
so yielding is the right thing for the descenders to do.
Last edit: 13 Apr 2021 21:33 by Lowell_Skoog.

Less More
14 Apr 2021 12:46 #235017 by eatskisleep
Replied by eatskisleep on topic Backcountry Ethics - Climbing and Descending
Thanks Lowell, I appreciate your insight. I think your framing of the situation in regards to who poses more risk to who is a helpful one. Yet, clearly it doesn't matter if one party is unwilling to consider the potential risk they pose to others.

Less More
14 Apr 2021 16:39 #235020 by TooSlim
Replied by TooSlim on topic Backcountry Ethics - Climbing and Descending
When I first started backcountry skiing I was fortunate to be mentored by others who had knowledge and experience and were were willing to share it with me. One rule they had was never ski above another skier on a slope. There may be circumstances where it is necessary or deemed to be very low risk, but they are the exception to the rule and always by skiers in the same party.  Skiing above someone on a steep slope, who isn't in your party, who you can see? Is this ever okay? It happened to me just this last weekend and, even though there was low avalanche risk on the slope, I still found it to be very unnerving.

Less More
15 Apr 2021 15:39 #235022 by Stefan
Replied by Stefan on topic Backcountry Ethics - Climbing and Descending
Musta been a teenage snowboarder.  Whatcha expect?  Haha!  At least now you are experienced with somebody coming down on you and you know what to do.  Good on you!

Less More
24 Apr 2021 13:02 #235045 by jdclimber
Replied by jdclimber on topic Backcountry Ethics - Climbing and Descending
An interesting topic for sure.

First, to address the unintentional between party conflict. Hopefully communication can prevent one party from killing or injuring another party by accident. Around Snoqualmie SPART/NWAC has introduced the backcountry radio program with the idea of handling this situation.  nwac.us/backcountry-radio-channels/

I like Lowell's suggestion, however in some situations I am not sure it is so clean cut. For example, the first party on a long route such as The Fuhrer's Finger on Rainier, the first party down on a busy Saturday will undoubtedly be skiing above other parties and probably knocking debris on them. The earliest party of the day avoids avalanche danger due to solar effect, less rockfall, and probably better skiing. Even if it were practical, should they wait until the party that slept in til 8am to summit or turn back or get out of the way? Possibly putting themselves at greater risk of rockfall or warming snowbridges. Or is the late rising party simply accepting the risk by not being the first party? I remember a post about the Tatoosh Zipper a number of years ago where a new climber flipped out and had a panic attack due to their discomfort of having skiers above them. It seemed that the actual danger was not the same as the climber's perception of it. Should the skiers be obligated to not ski the line until everyone felt like it was safe for them (regardless of experience, etc?)

In another example, out of the Baker Ski area, there are at least a few great ski runs that are constantly clogged by beginners on bad uptracks (Seattle skin track). Should those runs be off-limits to folks most days just because other parties are making bad decisions? There was a recent post about Stoneman's with an uptrack up the middle, should that route be off-limits to other skiers that day? Does not seem right.

I remember skiing the Slot once on a dawn patrol years ago. It was a foggy day, 3 turns in I came across the first of 5 people (spread out over 600 vf) boot packing up the run in thigh deep snow. The descending party did not end up avalanching the ascending party, which was fortunate that day. Based on conversations while passing them, at least 2 or 3 folks in the ascending party had no idea they were in avalanche terrain or that there was another route to the top of the run. I wonder, did we do the right thing? Or should we have turned back, boot packed up a few hundred feet, not skied the fresh snow, gone to work (based on schedule) and let the other party (who would have ruined our day) ski the beautiful untracked thigh deep powder just to ensure their safety over our fun?

I don't have any answers but I think these are good topics to discuss. I do my best not to see other people and therefore avoid conflict, but it does not always work out that way.