Earlier this year, Nick and I had made an attempt at the West Ridge Notch Couloir on Mt. Stuart but turned around due to warming fresh snow in the upper reaches. This spring has been continually wet and rainy, so thankfully we were afforded one more chance in the season to go back and give it a try. The night before we had heard someone had skied it the day prior, posting a brief trip report that there were some 'moat' problems (i.e. gaps in the snow between rock features) as the route started to melt out. We were hopeful that we'd be able to navigate the concerns and decided to give it a go.

We drove all the way to the Esmeralda Trailhead and hiked on dry trail for the first mile or so up towards Longs Pass. We started in trail runners and once we hit continuous snow, we stashed them by a tree and switch to skins. There was no overnight re-freeze, so the morning snow was soft and punchy. We started from the cars around 5:15 AM. We reached Longs Pass within an hour and skied down mushy, north facing snow towards Ingalls Creek. The snow was not continuous all the way down to the creek, and eventually we started walking downhill towards the log crossing. We shimmied across the log and followed the trail towards Ingalls Lake, which was also dry, to reach the bottom of the West Ridge Notch Couloir.

There were morning high clouds and it was clear that there was not a re-freeze overnight, so the booting up the couloir was mushy. We could see faint tracks from the party that skied the route the day before, but they were mostly melted away. As we climbed, we spotted 2 or 3 'moats' that we'd either have to jump or work around on the descent. We figured we could jump them and they didn't give us much concern. Around 7,500' the snow started to develop a thin crust, but still wasn't supportable. We spent about an hour and a half waiting mid-way up the couloir for strong winds and cloud cover to pass, concerned that the route wouldn't soften. After getting cold, we opted to continue upwards, curious what we might find. The upper pitches of the couloir are 45 degrees and sustained, so we weren't keen on skiing them in pure ice, but firm snow would be okay.

The last 1,500' of climbing up the couloir was difficult postholing in breakable crust. I got my ass handed to me...LOL. We reached the top of the line around noon, after slowly making our way up trying to give the sun time to warm the snow. Again, we waited for 30 minutes or so at the notch, getting blasted by the wind and turning cold again. We figured that the winds were going to keep the corn away, so we opted to drop in...tired of waiting. The upper pitches were firm, with no ski penetration. Don't fall... 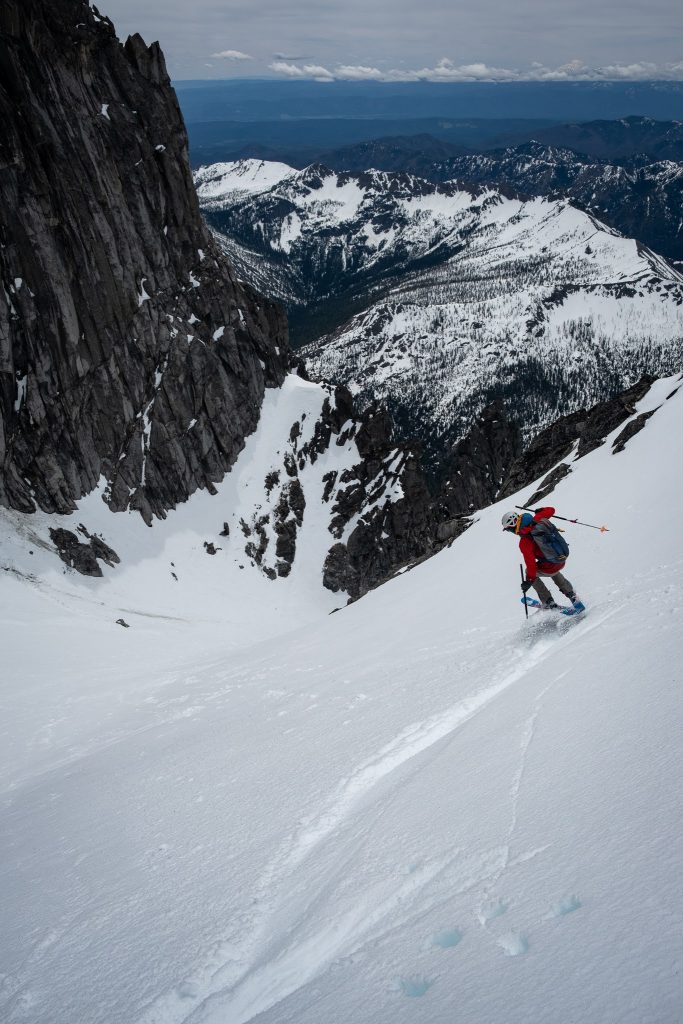 Honestly, the best skiing WAS the firm snow, as the sun-warmed snow became a punchy, deep mank crust that was very grabby and difficult to hop turn in. The lower down we skied, the more mank-y it got. We had to kick off wet sluff...wait...let the sluff go...then continue on. It wasn't the greatest snow conditions, but it sure was a cool line! 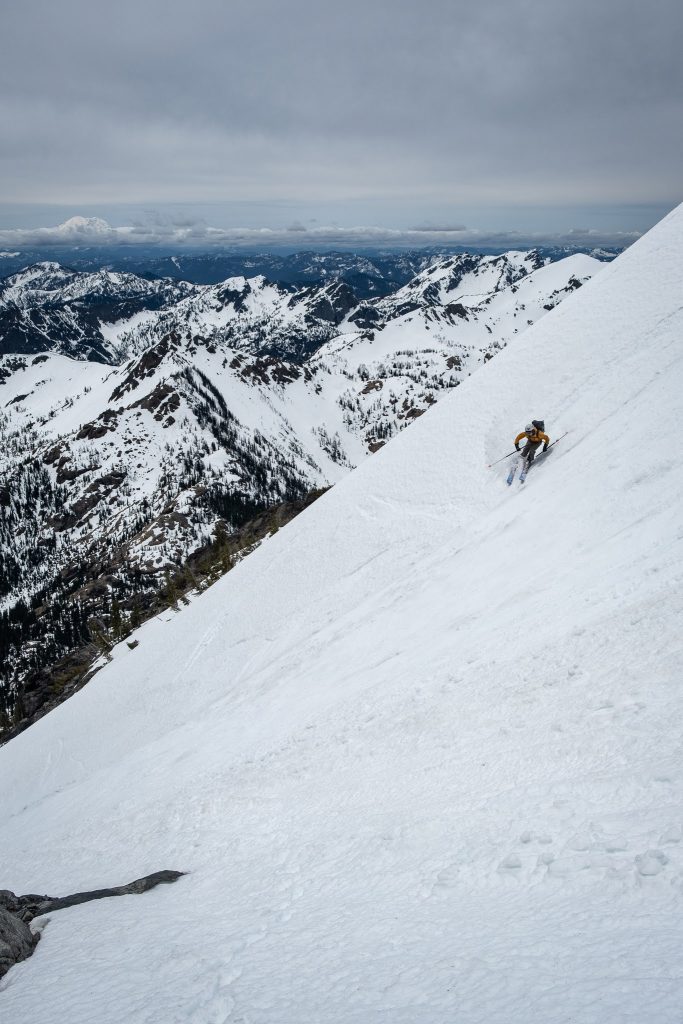 We were able to jump the moats on the way down and maintain a continuous descent. There was one section were we took off skis and booted over skiers' left to a more fall line patch of snow, but other than that the route barely still went. We skied down towards Ingalls Creek, where we returned the way we had came. Overall, 10.5 hours with around 2 hours of sitting, waiting, and getting cold. Glad to have got this one in but I definitely want to go back in better conditions!

It's been a spring without corn on Stu, at least the top half. Tough conditions for skiing that line. Pretty sure I saw the other trip report you mentioned (somebody's insta post?), and they skied the W Ridge couloir, which is the approach for the W Ridge climb, as opposed to W R. Notch that you skied. I'm jealous of you both, nice work!