Nick and I were desperate to find some corn. Some may say that whining about powder in May is a crime…but we just wanted reliable, timely, corn’o’clock.  We made a plan to head out to the Stuart Range for an overnight Saturday and Sunday. Our initial “goal” was to ski the SW Couloir of Argonaut on Saturday…maybe poke around in one of the lines on Sherpa, then make a camp beneath the Cascadian for an attempt at one of the main lines on Stuart (either Ulrichs or West Notch Couloir).

The forecast started as splitter bluebird for both days but by the time we left for the trip Saturday appeared to be rain and thunderstorms. Oh well…we’d give it our best shot.

We were able to drive our cars within 0.5 miles of the Esmeralda Trailhead, thanks to the forest service clearing logs this season that normally prevent access until later in the year. We began our day at 5 AM in hopes of having a chance to go for some of the bigger lines on Argonaut and Sherpa. As such, the skinning up to Longs Pass was firm and quick. I chose to boot one short section near the top where the runout was concerning enough, but other than that the travel was straightforward.

As we crested Longs Pass we entered a cloud…lovely. We had been hoping to get eyes on Stuart to scope out the West Notch Couloir, which we had heard great things about, but alas no dice. We scraped our way down Longs Pass towards Ingalls Creek on morning, frozen snow…in a cloud. What a start! We found the main trail crossing across Ingalls Creek easy to navigate with a but scoot along a big log. Joe was brave enough to cross it on his two feet, but I didn’t have the boldness of him. We headed towards the base of the Cascadian where we found bare, dry trail up to 6,000’. We made a camp around 5,000’ and dropped our gear. 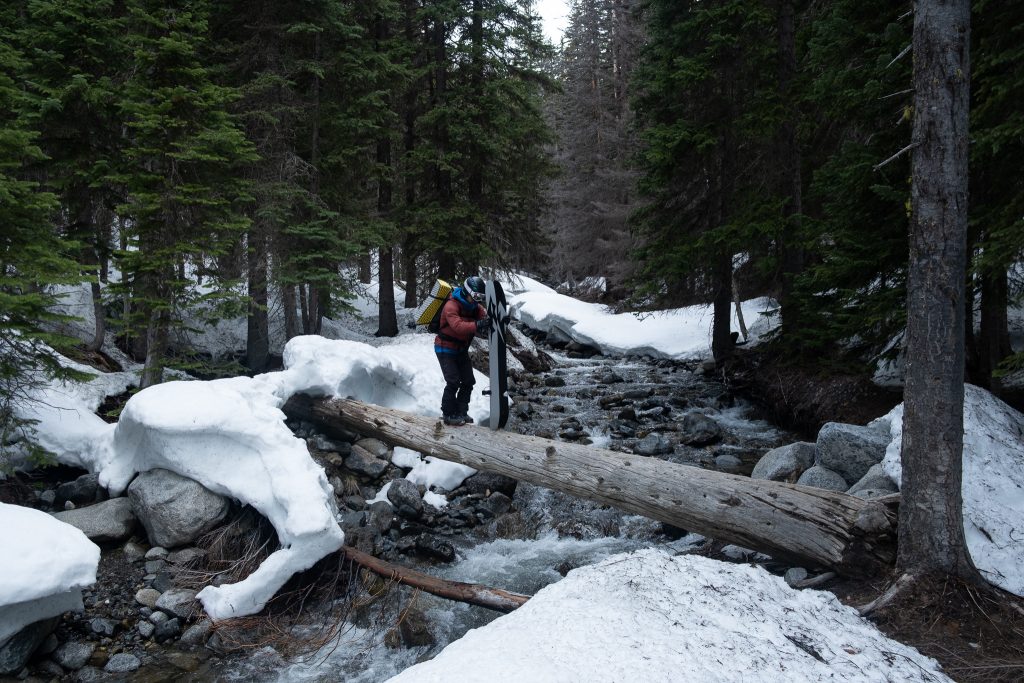 Clouds were looming above, with thunder clouds in the distance approaching. Nice…We tried to give the Cascadian a go but found that the mountain just wasn’t giving us any kind of window. We’d climb 500’, stop to wait for clouds and rain to stop, take a nap..repeat. We got about 2,000’ up the couloir when the snow really started to come down. “Let’s punt…”, I proposed.

We made it back down to camp by NOON…haha, I guess that’s what early starts get you. We napped all day long, eating food and joking around with no regrets of our choice. It was a fun day to just hang around in the woods, beneath a drippy tree branch. Sunday provided us much better weather. We woke up to clear skies and a good refreeze overnight. We knew that there was likely a few inches of new snow up high on the mountain, so we opted to go straight for Ulrichs Couloir via the Cascadian Couloir as our ascent route. Nick had already skied Ulrichs, but neither Joe nor I had. As a group, we figured it’d be a more sure bet than the West Notch, which would be a further approach from our camp.

Climbing up the Cascadian was CRUISER…we made it up the couloir in 2.5 hours in great, firm snow. We saw a party ahead of us as we neared the false summit, and thankfully they set a booter for us through the 6-8” of new snow that had fallen overnight. The new snow began to concern us a bit as we got closer and closer to the false summit. It was now baking in the southeastern-facing sun. 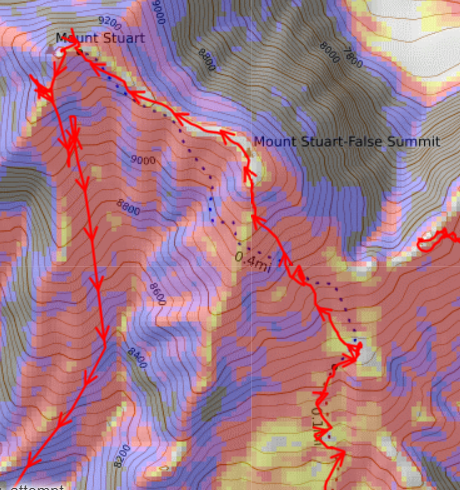 In winter it's easiest to traverse from the false summit towards the true summit, rather than taking the summer route.

We reached the false summit and traversed over to the true summit. When we crossed paths with the group ahead of us, I realized it was Kurt Ross, a friend of a mutual friend. LOL.  We reached the true summit within 4 hours from camp right around 10:30 AM. It was early for a “corn run”, but the new snow was baking and I was concerned. The top pitch of Ulrichs is an open face/bowl which has no real protection from slab development and is exposed to winds and sun. It’s the steepest pitch of the run, maybe nearing 50 degrees. It’s not very scary, but the new snow coupled with the openness of the terrain made me concerned about wet slabs. 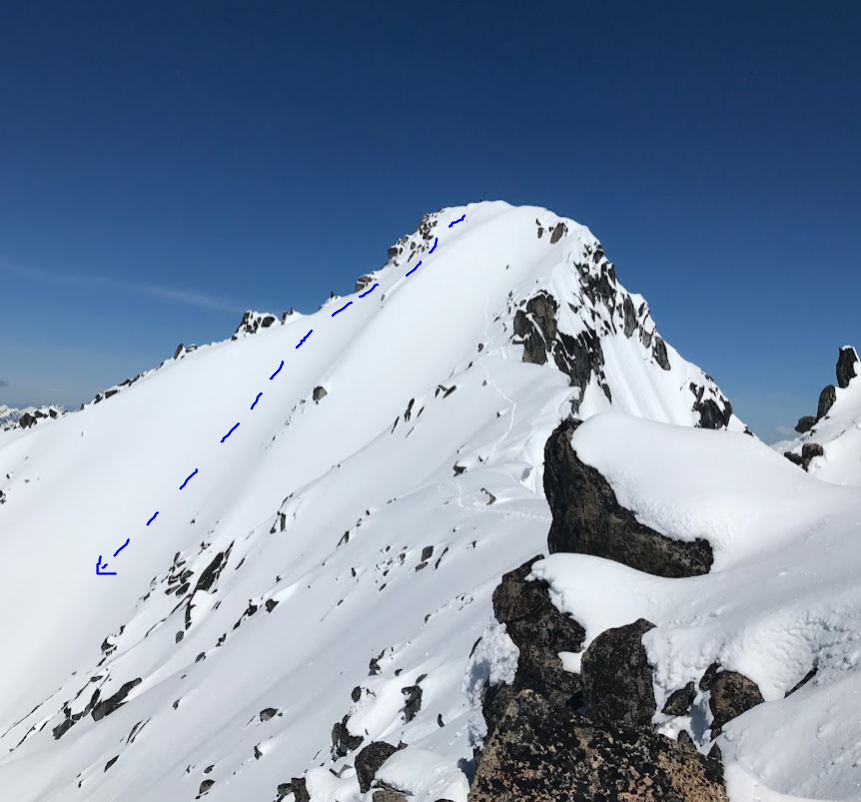 The upper pitch of Ulrichs, as seen from the false summit. Nick proposed that we wait another 30 minutes before dropping in, but I wanted to get us past the initial pitch before the snow warmed even more. I dropped down beneath the first 200’ or so to a small bench on skiers’ right. We waited here for another 20 minutes to hopefully let the snow soften, as we were past the part that concerned me. Clouds rolled in, though, and we opted to just go for it. 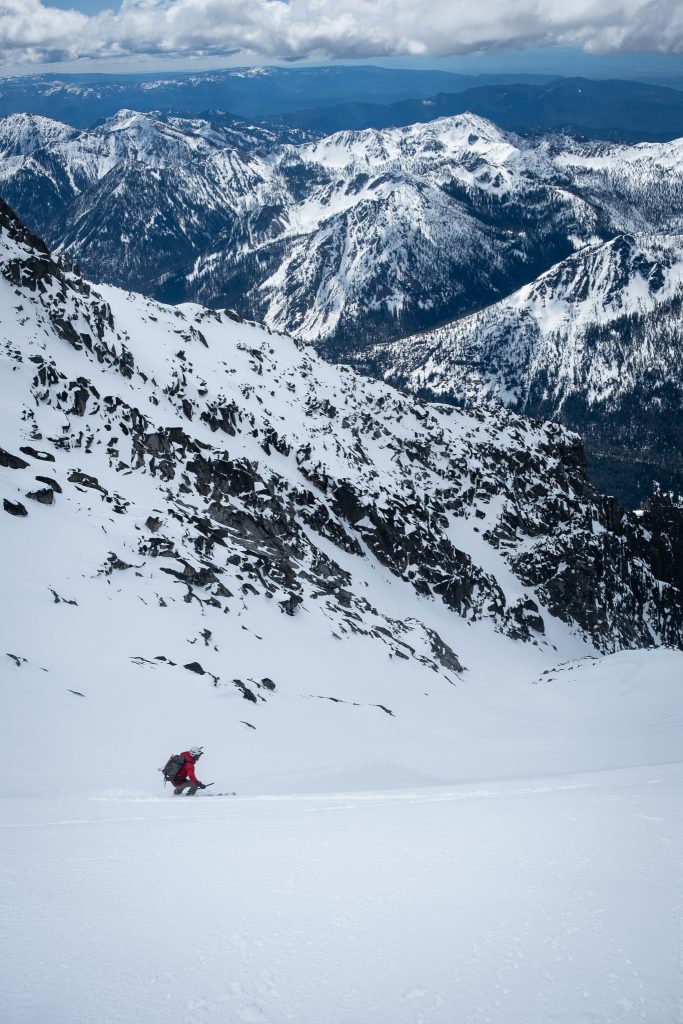 Nick dropping in. The snow in the upper couloir was a funky mix of slightly baked powder, crust, and chunk. It skied pretty ok, but snow stuck to my bases on the upper pitch and I couldn’t link up turns without scraping my bases every few times. As we neared the dogleg to skiers’ right the snow became a bit more consistent and we were able to hold more speed. 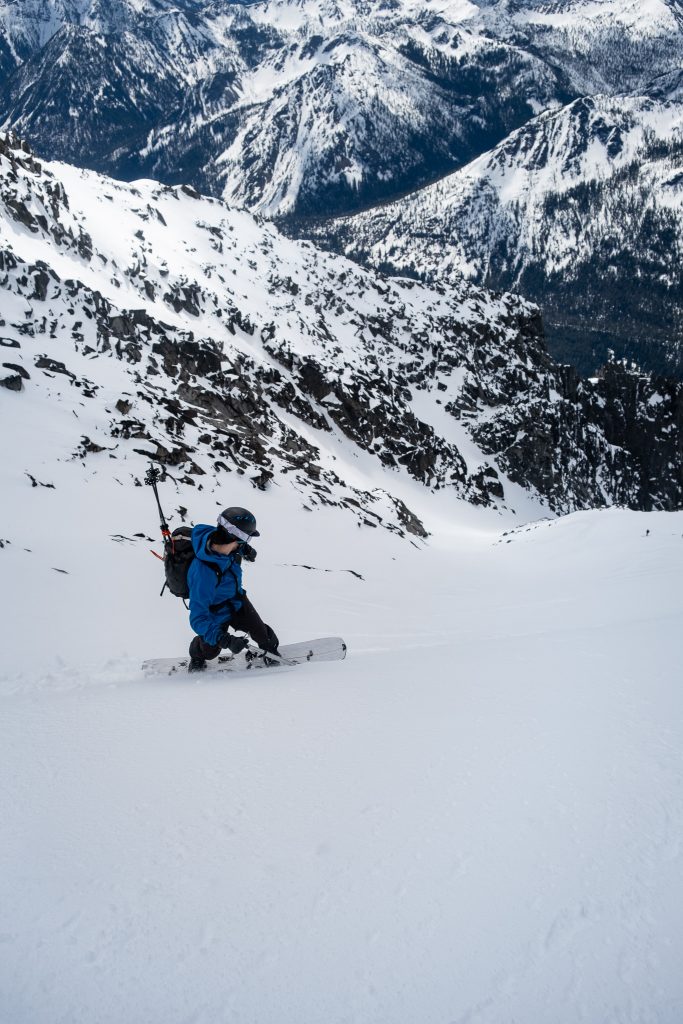 Joe looking down the line. The couloir itself is SUPER COOL…there are huge granite walls on either side of you and it starts from right off the summit. Near the bottom there was some avalanche debris we had to manage, but overall the ski was quite pleasant. It wasn’t ripper corn, but it also wasn’t breakable crust. I’ll take it. 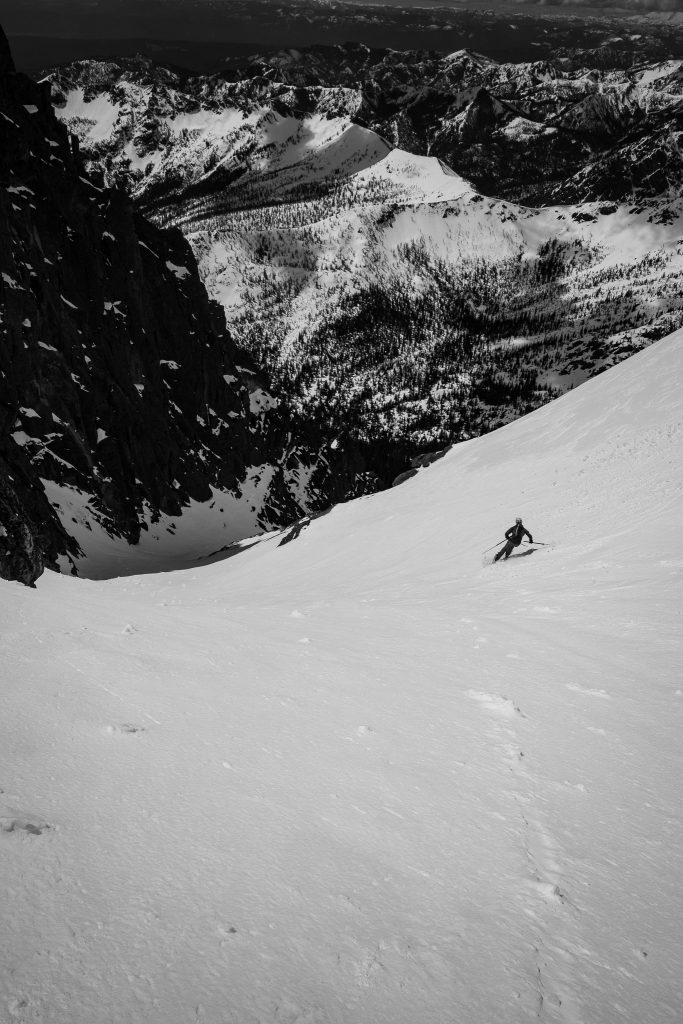 Much is written about the waterfall at the bottom of the couloir…it honestly didn’t feel that difficult to identify where to cross over to skiers’ right. Around 6,800’ you will see a ridgeline to skiers’ right with small trees…just head there and avoid the waterfall, which is lower down around 6,600’. The best snow of the day was between 6,800’-6,000’, where there hadn’t been new snow and we had corn. 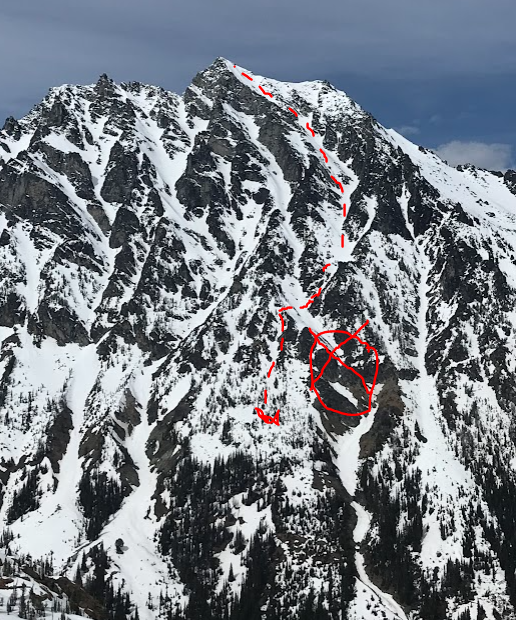 Traverse to skiers' right around 6,800' to avoid the waterfall. 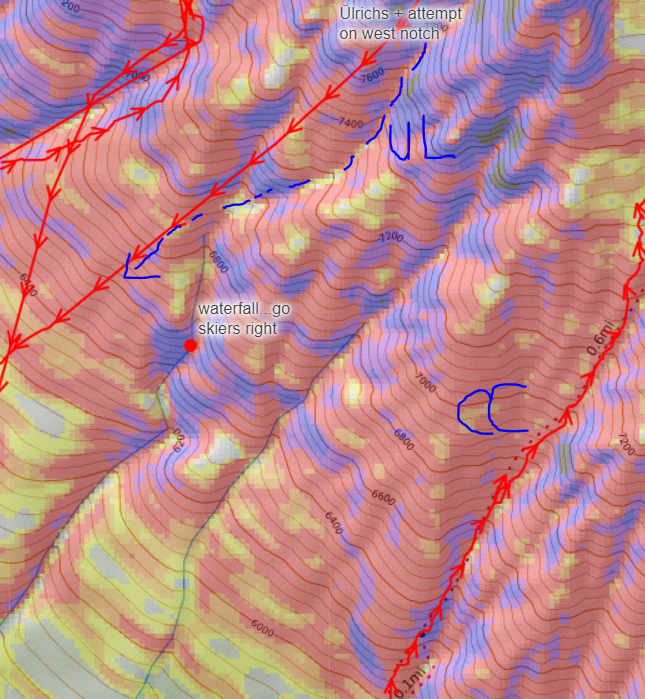 CC denotes the Cascadian Couloir; the blue UL denotes Ulrichs, corrected for GPS errors. We opted to traverse skiers’ right towards the West Notch Couloir to give it an attempt. We knew that we were a bit late in the day and the clouds would have to ‘play ball’ with us…plus, we weren’t sure what booting up all that new snow would be like. But we wanted to give it a ‘poke’, to get eyes on the route in hopes of coming back some day. If things aligned, maybe we’d get to ski it…we’d just have to see.

Booting up the couloir was cruiser conditions until we hit snow line around 7,200’. We made it to about 7,800’, where the couloir reaches a large tower. Here, Nick found thigh deep new snow that was getting absolutely cooked in the sun. We saw some rollerballs starting around us…we looked up at the sky and thought that MAYBE we could play “cloud roulette”. I was ambivalent about whether to keep going or turn around…it was one of those ‘margin calls’ that probably would have been fine but would have been ‘getting away with something’. We agreed to turn around because it just didn’t make sense to be playing with objective hazard like that. Plus, we probably would be going much slower as we got higher wading through all the new snow.  What we did get to ski was super fun and we will DEFINITELY be back for this line. It’s not very steep but more fall line than Ulrichs and has no ‘waterfall’ or other BS at the bottom that you have to navigate. There are a few obstacles above where we turned around that require some navigation, but they didn’t seem to difficult to manage in a fat snow year. In thinner snow years, the route has more difficulties with rocks and waterfalls that melt out.  We made it back to camp, packed up our stuff, and slogged up to Longs Pass to rip corn back to the car. A great weekend poking around!

Thanks for the report. Great to hear about the big lines. Tough spring in the Teanaway for south faces.