Last Saturday, Alex, Adam, and I skied an (almost) full traverse over the Three Sisters of Central Oregon, which, without a snowmobile on either end, made for a long day. We skied from north to south, starting as far up the road to Pole Creek trailhead as we could drive, and exiting to Dutchman Flat Sno Park. Luckily, we were graced with beautiful views, calm wind, and great (if too warm) weather. We opted to not attempt the summit of North Sister in order to save time and carry less gear, and instead, we started our descent off North Sister at approximately 9,300 feet on the SW ridge of North Sister.

They day beforehand, we scoped out the Pole Creek road and dropped a car at Dutchman Flat. 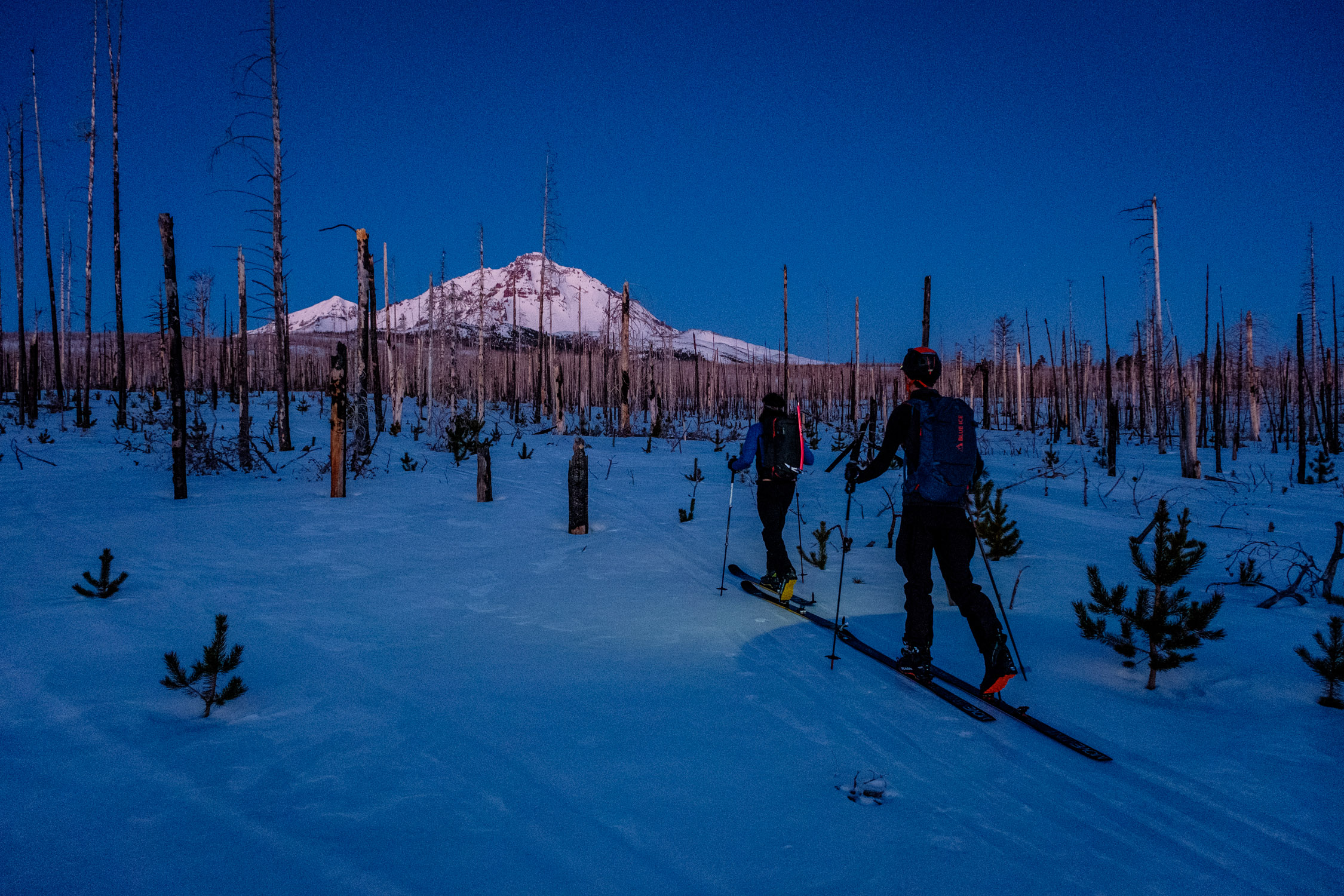 Day of, we left home at 4am and parked approximately two miles shy of the Pole Creek trailhead. We were skinning up the road just before 5:30 am. The road was almost entirely skiable, but melting out fast. We only needed to remove skis for one or two short sections of dry road. By the time the sun rose just before 7, we were about a mile and a half past the trailhead. By this point, it was already clear that the day was going to be a scorcher, and we should have started even earlier. 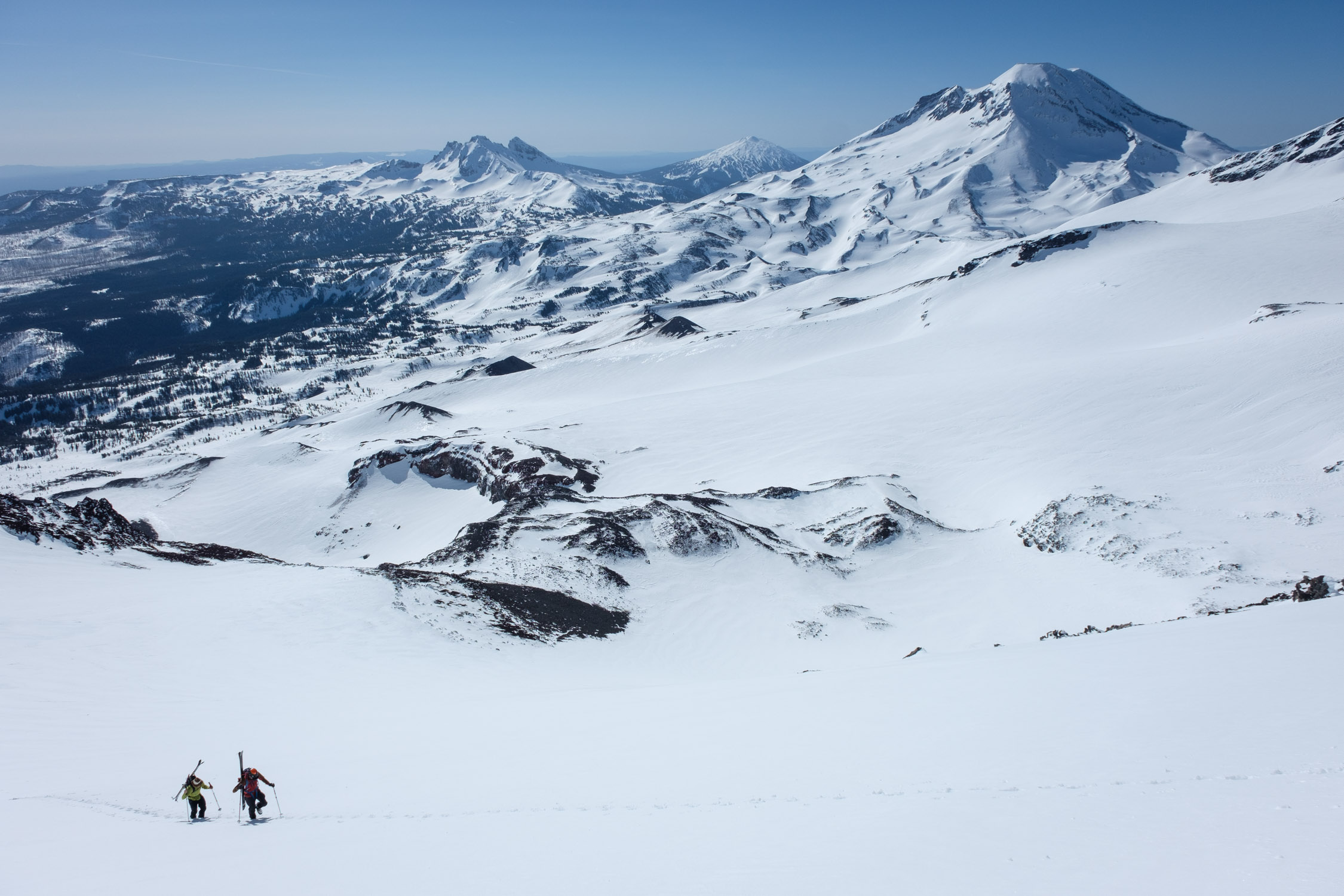 Travel was easy and uneventful up the Hayden Glacier, where we put on ski crampons before the steep ascent up the south slopes of North Sister. We booted the last hundred feet or so to the south ridge, then climbed up to ~9,300 feet before transitioning and skiing absolutely heinous wind-affected ice off the west side of the ridge down to the North Sister-Prouty Point saddle. By now, it was ~11 am. Skiing around the west side of Prouty was straightforward, and soon we were strapping on boot crampons for the last 800 feet up the North Ridge of Middle Sister. Delightful cramponing conditions.

We reached the summit of Middle Sister at 12:30, and stopped for lunch. We then dropped into the obvious and spectacular couloir which drops 1,100 feet at a sustained 45+ degree pitch from just south of the summit to the Diller Glacier below. We had scoped this line out from the approach. In retrospect, given the rapid warming, this descent choice was a mistake. Although we had seen no evidence so far of loose wet activity, and the snow at the top of the couloir was not reactive to a ski cut, Adam triggered a small slide (D1.5 R1) when skiing over a slightly steeper convex roll which ran the full length of the couloir. He was thrown off balance and easily able to recover and exit the slide before it gained much speed, but still, a fall here would be unpleasant. We carefully skied the rest of the couloir without incident, and then easily traversed the Diller Glacier back to the Southwest Ridge and down to Chambers Lakes. 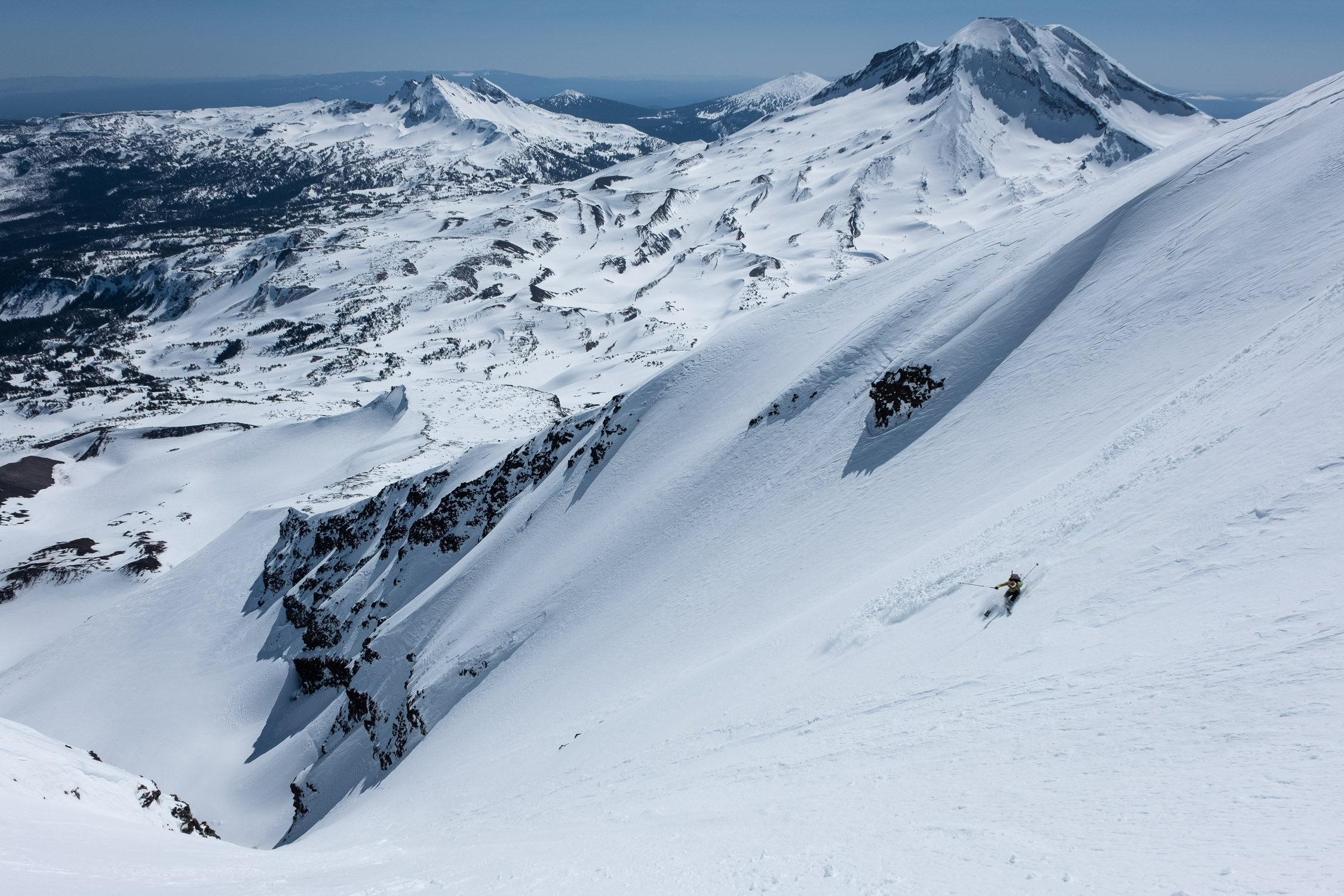 We paused here in a small bit of shade to reevaluate. We were all somewhat shaken by the unexpected reactivity of the snowpack, and after much discussion of various possibilities, including bailing, we opted to reduce the steepness of the upcoming terrain, as well as reduce our exposure to overhead hazard, by ascending the West Ridge of South Sister, instead of the Northwest Ridge as originally planned.

We began our ascent of South Sister at 14:45, easily making our way through various moraines to the base of the Northwest Ridge and across the Lost Creek Glacier to the base of the West Ridge at ~10,000 feet. In its sun-softened state, to our delight, we were able to skin the entire length of the West Ridge without trouble (and with the aid of ski crampons) to the crater rim at 17:45. We walked over to the true summit, then began our descent of South Sister at 18:20, plunge stepping down the first hundred feet or so to avoid rime ice, then skiing unpleasant refrozen snow down the south ridge. Conditions steadily improved as we descended, and we enjoyed lovely sunset views of the full moon rising behind Broken Top. We dropped down to Moraine Lake, and eventually put skins on as it was getting dark. We refilled water just before the Green Lakes trailhead, and then made the 4.5 mile trudge up the road to Dutchman Flat under the light of the moon. We arrived at our awaiting car at Dutchman Flat just before 23:30. 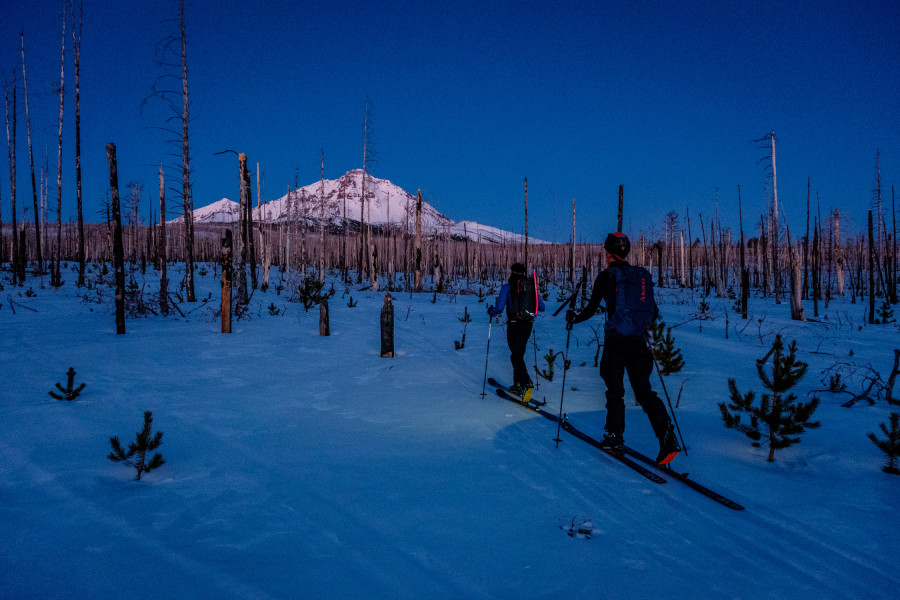 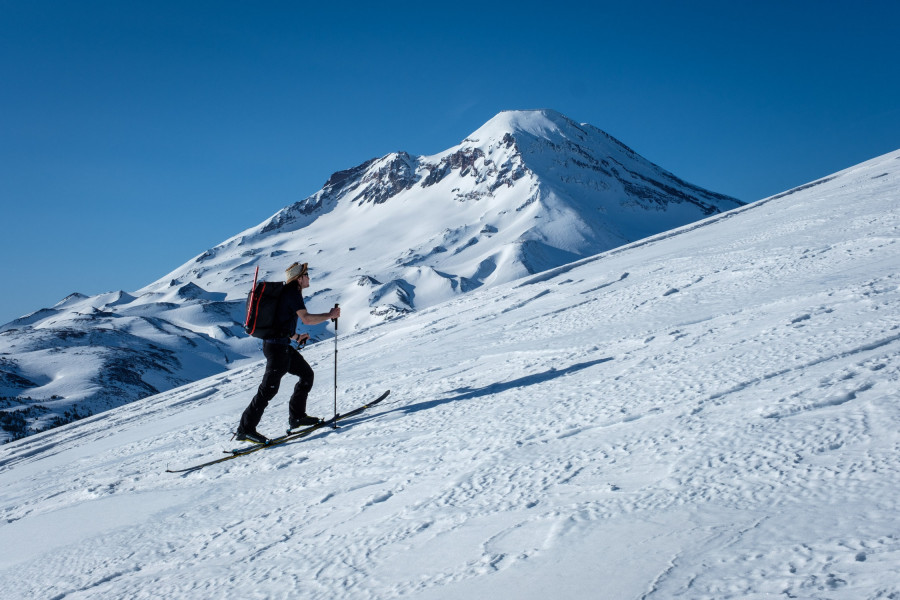 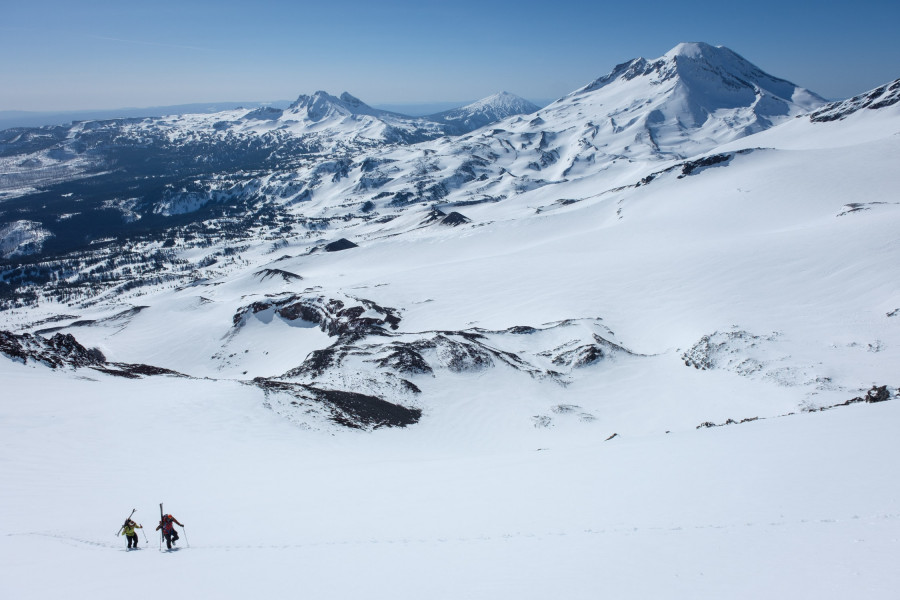 Our route up South Sister 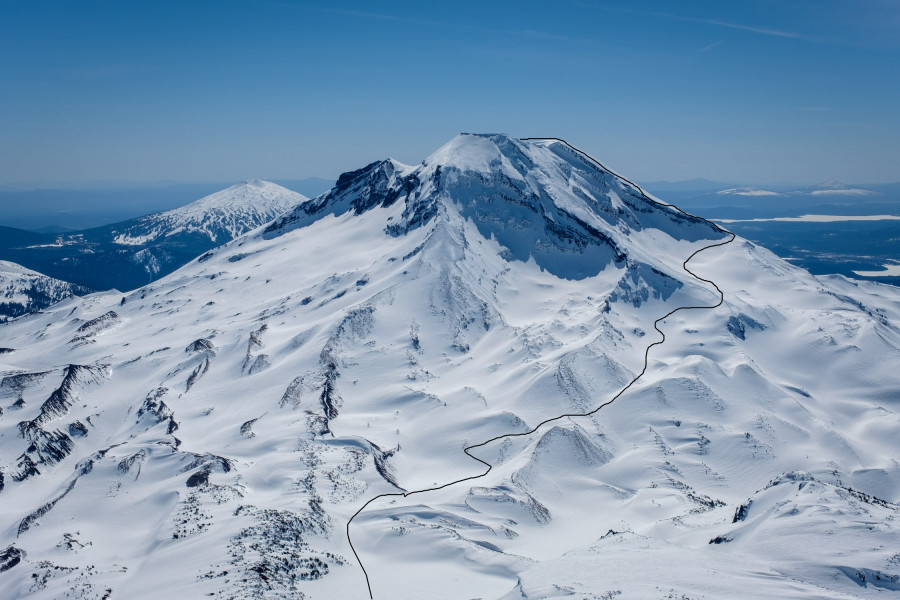 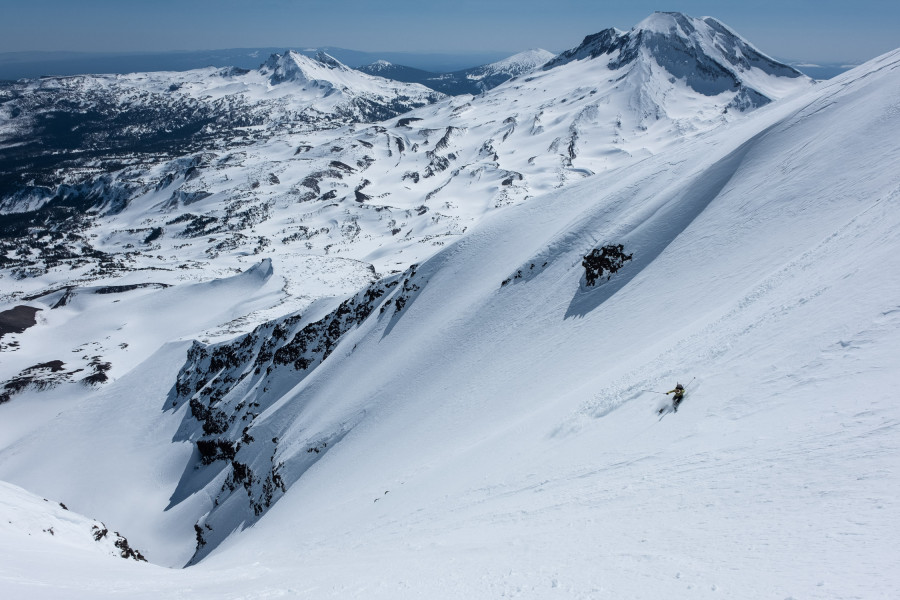 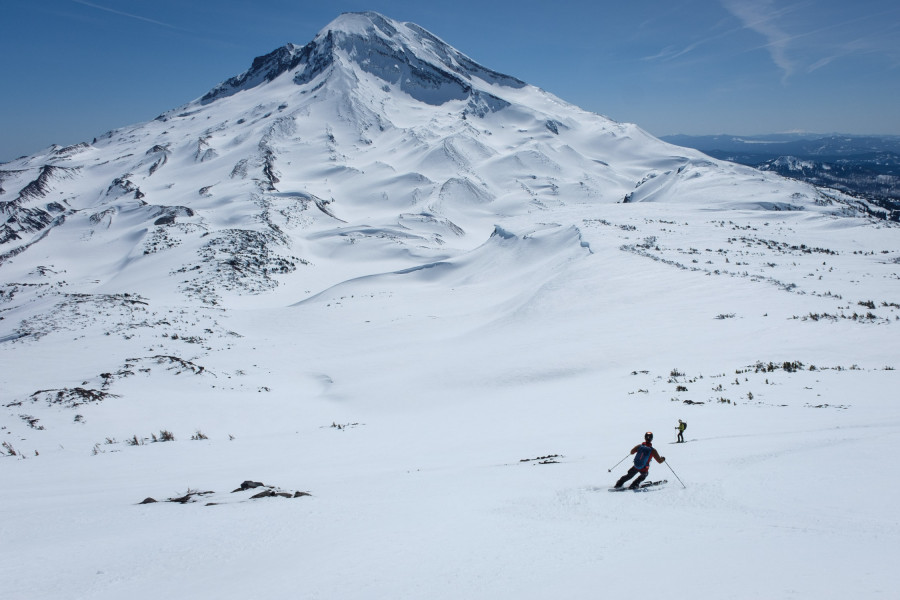 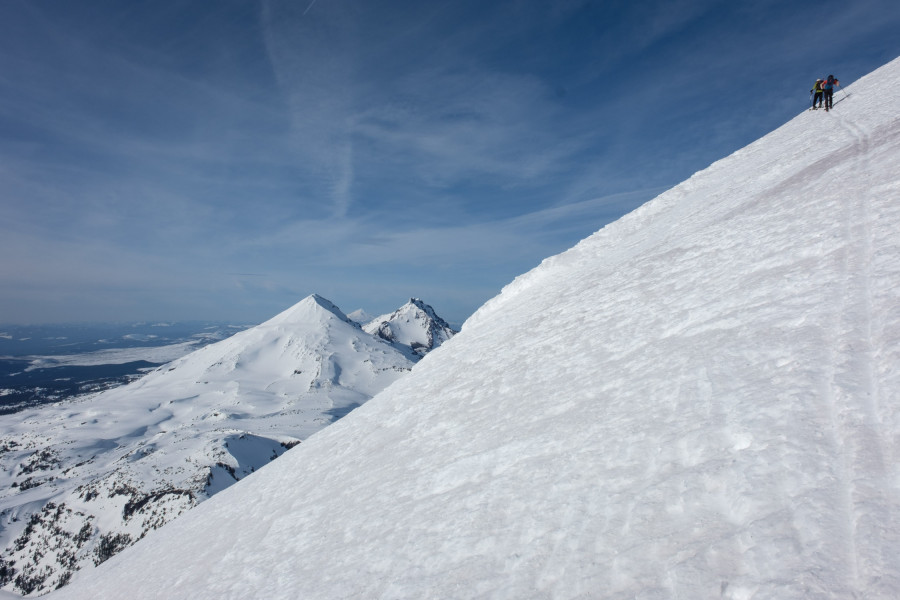 Adam and Alex at Moonrise with Broken Top 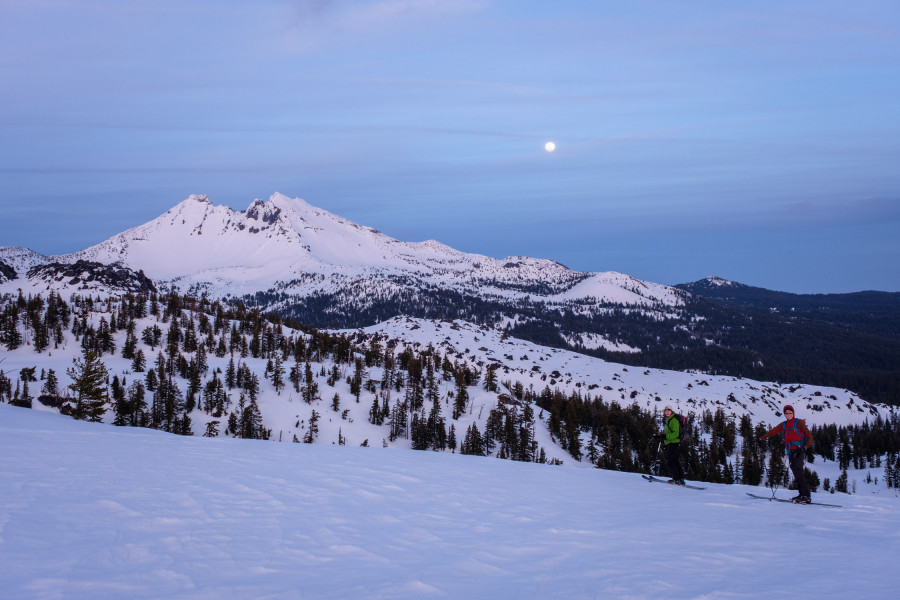 Awesome photos and report! I was looking off the summit of south around 11am, you were probably hidden between Middle and North. I've been itching to get out and do this as well... 10k is a legit day.