Last year (2020) I skied Mt. Shuksan twice...but with high pressure again, why not give it another go? The goal for the day was the Northwest Couloir (NWC), with the intent of skiing the summit pyramid as well. We planned to climb up the White Salmon Glacier (WSG), up through Hell's Highway, then ski the summit pyramid and wrap around the NE side towards the Upper Hanging Glacier. With high pressure and blue skies, we were excited for a day in the mountains.

Kyle and I stayed with Anthony in his new house...early in the morning we packed up his truck and began to drive it down the road, until the power steering started to fail. Uhhh....let's take my car. We called up Will and told him of the situation, and hopped in my car. Nothing like some early morning car troubles. We were a bit later than planned starting out the day, but ultimately it didn't matter. We got started around 630 AM, just about 30 minutes behind schedule. The ski down into the White Salmon drainage was a nice reminder of Spring: breakable crust. Skinning up the White Salmon was cruiser...with the exception of some annoyingly steep skin tracks (sigh). Other than that, the route was very typical...no icy spots or terrain hazards that were notable. We made good time up the route, passing through Hell's Highway and reaching the base of the summit pyramid in 4.5 hours. There was already a booter in for the summit block, which was GREATLY appreciated. Overall, the summit pyramid was in decent shape. There were spots of hard rime, but overall not too many, as compared to last year, when the entire face was rime-covered. We clicked on skis just below the summit in the heart of the SE face; I skied down about halfway to take some shots of Kyle, Anthony, and Will. 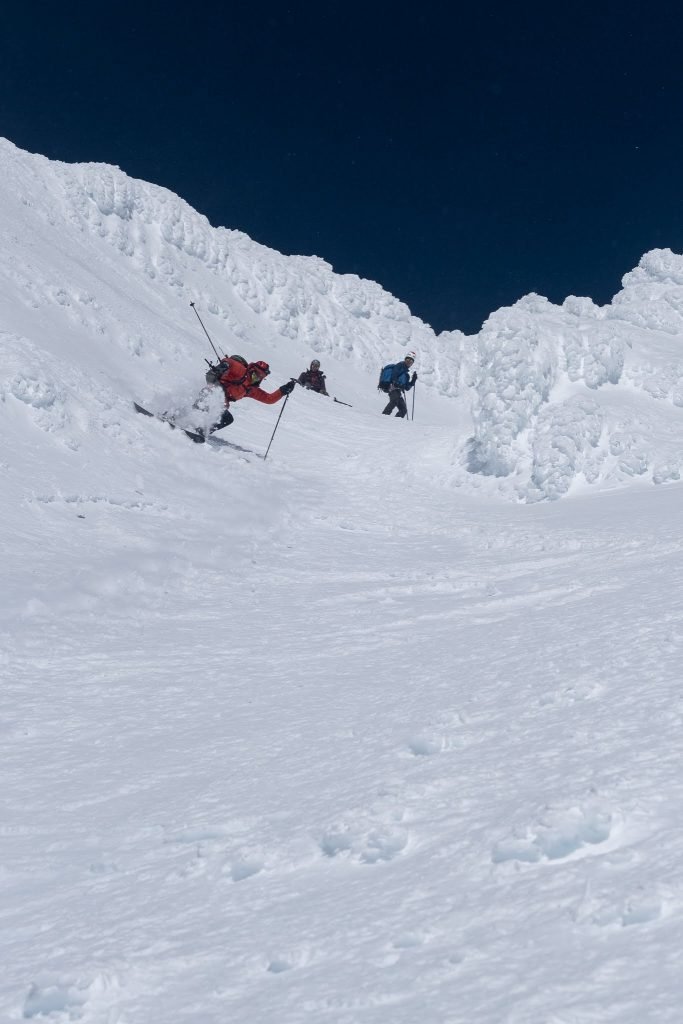 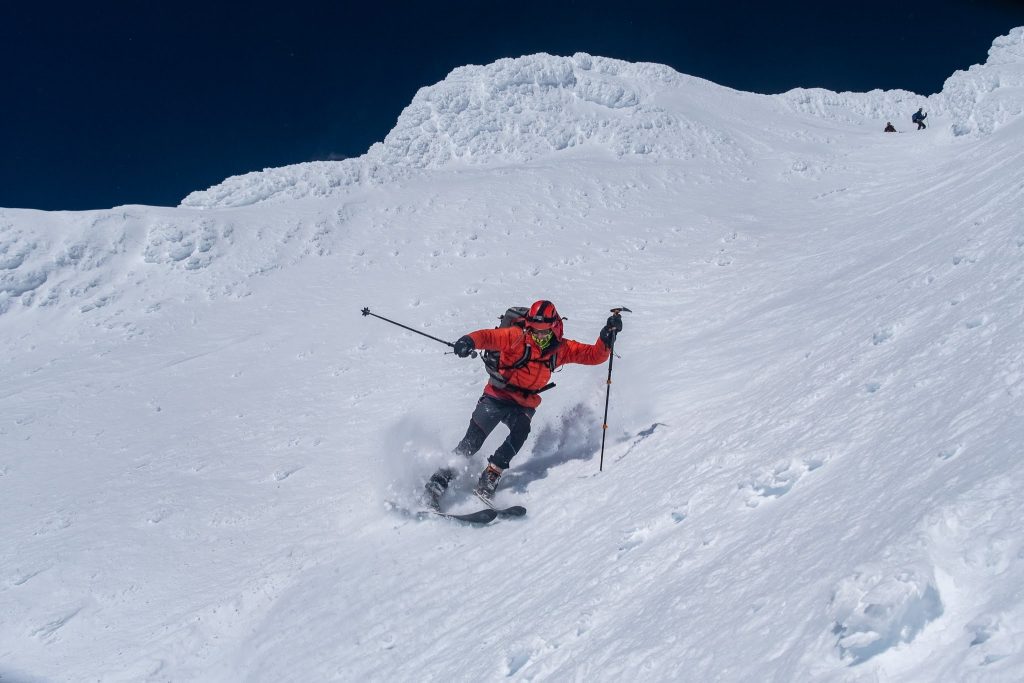 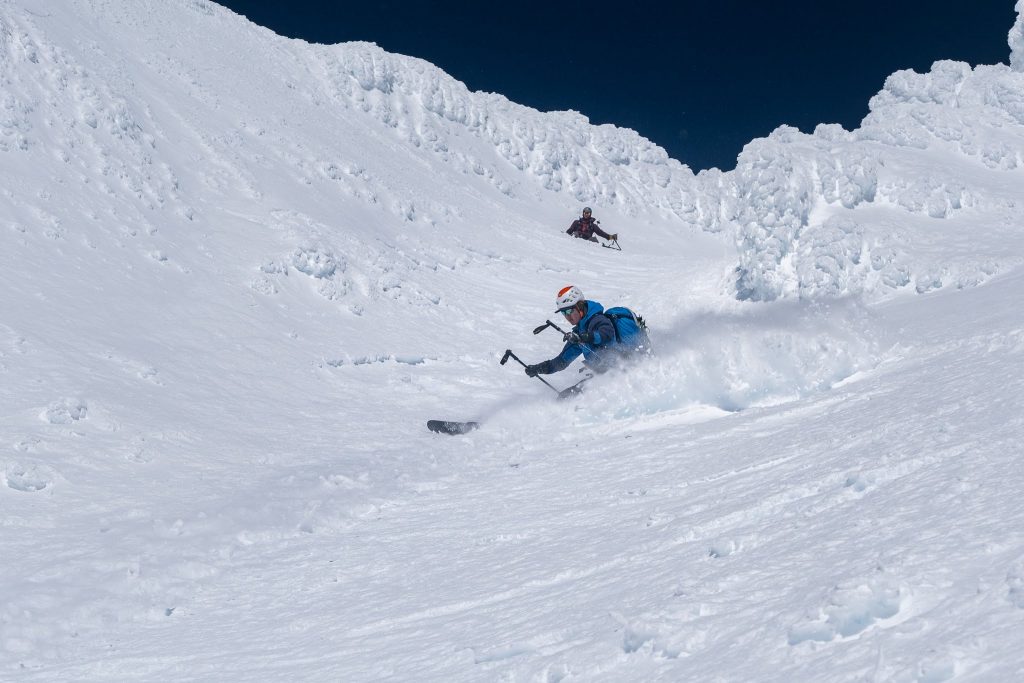 It has been a while since I skied steeps this year because of the persistent weak layer problems we have been having. My jump turns were just a bit rusty. 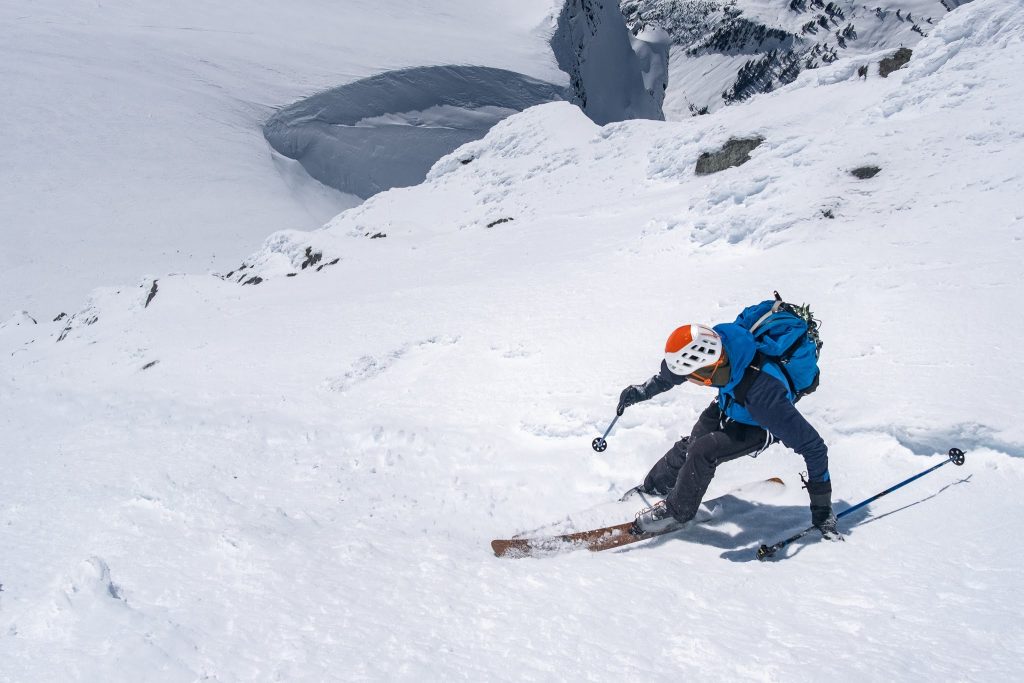 Kyle looking down the SE face. I saw an angle with Kyle skiing down the fall line with Baker in the background and couldn't pass up the shot. 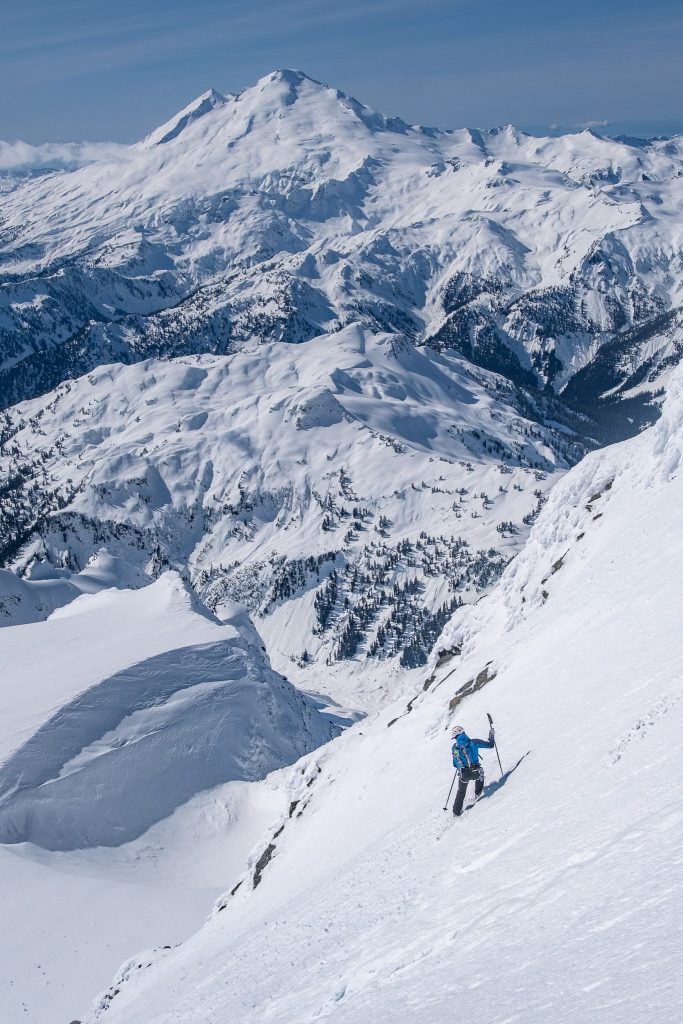 From the base of the summit pyramid, we wrapped around to the NE, instead of skiing down the Sulphide Glacier towards Hell's Highway. A MUCH better route! Less skinning back up...less wind affect...and you get to check out the Nooksack Cirque! Our goal for the day was to ski the Northwest Couloir, as I previously mentioned. Once on top of the Upper Hanging Glacier, we regrouped, turned on radios, and began to ski slowly towards the entrance. On a rollover Will took a pretty nasty fall on some blue ice that spooked us all. We took a break at the entrance to the couloir and waited for some snowboarders to finish booting up the couloir. They reported a small patch of white ice on the traverse above the cliffs, which is notoriously exposed. Will and I waited at the top of the couloir as Anthony and Kyle skied down ahead, with radios to transmit back a conditions report. Kyle and Anthony safely navigated the traverse, noting that the ice section was short but committing. Will and I opted to divert to the White Salmon Glacier; we split the group, with Kyle and Anthony skiing the rest of the NWC, while Will and I stuck together and headed for the White Salmon. The White Salmon was AMAZING snow...still dry and soft, protected by the northern aspect and shade. The run down was cruiser and fun. We regrouped with Kyle and Anthony at the valley bottom, congratulated them on an awesome line, and headed up and out back to the cars. Overall, another great day on a stunning mountain.

Sounds like an awesome time and sound decision making! Congrats!