Made a gamble with the weather and lost. Attempted a casual two day ski ascent/descent of Shuksan via the sulphide glacier route. Hoped to hustle through scattered showers on Saturday for a glorious Sunday. Starting out rain was more consistent than expected, but spirits were high and we prepared for some precip. A few miles in we moved through some denser trees that felt like skinning through a car wash. We all came out drenched and rain was not letting up. We realized that this was going to be less fun than anticipated and the forecasted night in the teens was something to worry about given how wet we were. Decided to bail halfway from TH to camp. Had a few fun turns back on some slushy snow and drove out to glorious sun and beers in Sedro.

Snows blocking the road about half a mile from the trail head. Consistent snow to skin about a mile in. Someone got in before us and hope they had a dryer time than us. 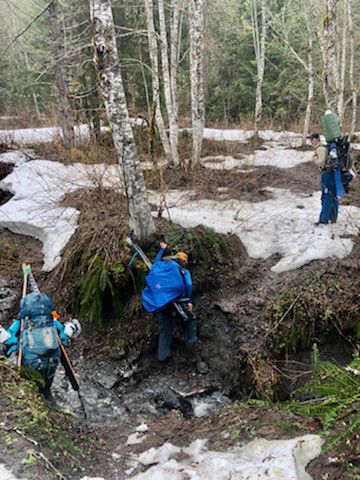 You don't know untill you go - so, good on you for trying. Based on your description, sounds like pulling the plug was the right thing to do.

My first real trip upon moving to the North Cascades in June 1999 was 4 days of blowing snain on the Sulphide.  Came away with blisters so deep I got septic. Still remember shivering in the tent.

Oh damn! Glad we turned around then! Were you all stuck or fighting it out? It definitely was a battle between the ego and wanting a good story vs fun/safety. I feel like the failed attempts are good for keeping the desire going.