We loaded up and started hiking, reaching the waterfall (or natural air-conditioner that is especially welcome in the summer) in about 40 minutes, and proceeded up the trail to the ridge. Shortly after the waterfall the trail became quite icy, making navigation even in sturdy hiking boots quite difficult. Both creek crossings were fraught with potential-disaster, as it was a crap shoot for which stones would provide solid purchase, and which ones would make you fall on your ass into the freezing creek.

We met consistent snow just above treeline (about 5300'), but had to hike to the top of ridge to transition to to ski boots. Definitely bring sturdy approach shoes (and a bag to stash them if you're feeling lazy).

About 15 people arrived before my party of three, and they had put in a lovely skin highway to top. We took two laps, one on the shady side where the snow was lighter but the crust below mightier, and a super fast lap skiers-right of the ridge! The snow was super light and fluffy, about 4' of dust on carveable crust (perfect tutu-skiing condition!). Don't lean into the slope too much or it'll grab you, but otherwise it was very fun. Wish we had time for one more lap!

We skied as low as we could, down to the transition point, but the navigation was dodgy at best. Bring rock skis and plan for an adventure. We kept our boots on for the descent down the ridge which was a good call, made for better purchase on the snow and rocks.

The slog to the car was standard, icy on the trail even on the way out at 4pm. I do not own microspikes, but were I ever to buy them, these would be ideal conditions. 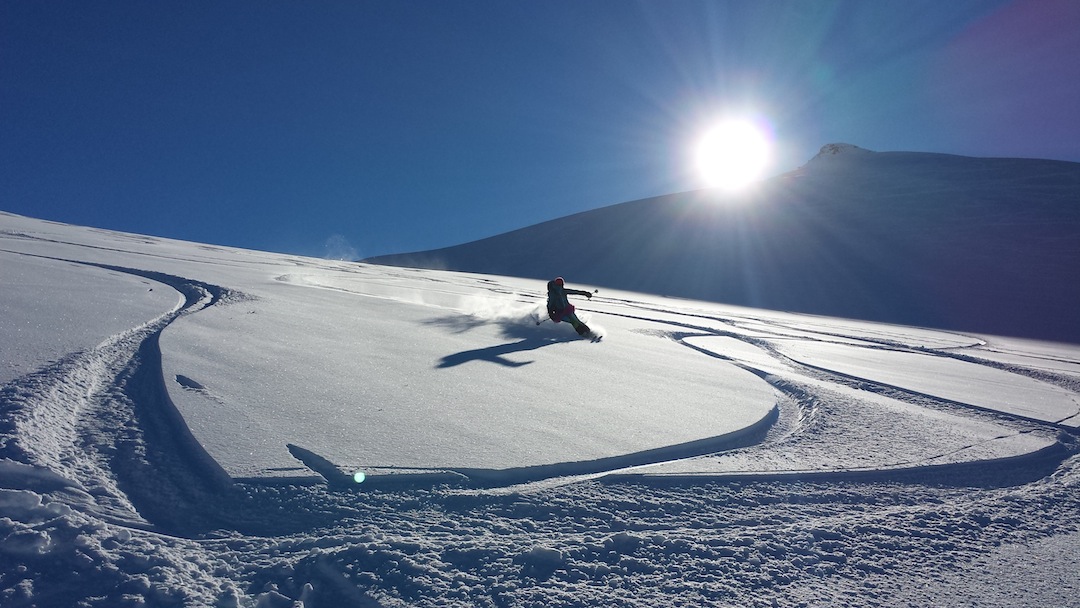 11/4/14 2:41am
avajane
The trail from Paradise was very icy as well. $30 spikes of and trail runners were much safer and faster than anything else.Everyone should have a pair.
11/4/14 6:44am
mikerolfs
Wow that is an awesome photo!

I seem to recall an early last winter report of yours that included some nasty blisters and an icerink walk out from Lake Colchuck.  I'm a little disappointed that you aren't now carrying micro-spikes as standard safety exit gear.  You should tell Santa that's what you want to see in your stocking this year!
11/5/14 2:03am
avajane
Mike, I think that you and I need to be field Reps for Micro Spikes! I remember that blister!!!
11/7/14 3:26pm
kciari

author=mikerolfs link=topic=32516.msg136140#msg136140 date=1415052007]
I seem to recall an early last winter report of yours that included some nasty blisters and an icerink walk out from Lake Colchuck.  I'm a little disappointed that you aren't now carrying micro-spikes as standard safety exit gear.  You should tell Santa that's what you want to see in your stocking this year!

You're right Mike - I did get nasty blisters. But I would have gotten those with 20 miles in ski boots if I had been in micro-spikes or not. And having walked on that skating rink, I can tell you microspikes would have definitely been inadequate. Crampons were hardly adequate. Maybe I should ask Santa for a bobsled?!?!
11/8/14 12:43am
mikerolfs

If we're getting Santa involved, make it a rocket sled!
11/8/14 6:24am
lolob
How do you think conditions will be up there this weekend?  Looks like temperatures were warmer this week, so I'm guessing they got some rain at the end of the week along with high winds.  Also, Glacier Creek Rd/NF-39 is open again after last year's closure, right?