April 2022 has been a weird month here in Washington...winter seems to have not made up its mind, and instead returned with quite a vengeance. Weekly snowfall has put any hopes of corn to rest...for now at least.Friday was a tricky forecast, with overcast skies following a western front and rising freezing levels. I had been concerned that the clouds would make skiing any large open faces difficult from a visibility perspective, so I opted for couloirs. The trick was finding couloirs that were sufficiently high elevation to evade the higher freezing levels...quite the puzzle.

Matt Randall was in town from Salt Lake and we opted to head out east to check out Cashmere. I had skied the south couloir last year but had read on my buddy Todd's trip report that there is a cool NE couloir tucked away on the east shoulder. I figured that Friday was probably going to be a tricky day to line up any BIG objective, so to Leavenworth we drove!

We left Issaquah at 4 AM to try and get a decently early start. The forecast told of increasing sun throughout the day so I wanted to make sure we were at least on the top by noon. As we reached the Bridge Creek parking pullout, I was surprised to see that the Icicle Creek road was open further than the winter closure. For a moment, I contemplated going up the north side via Lake Victoria, as I had done last year. We had initially planned on hiking up the Eightmile Road towards Pioneer Creek and approaching via the S side, bringing trail runners with us.

Given that the Stuart Range hadn't received much of any snow in the past few days, I started to think that it was more likely we'd find corn on S aspects, rather than protected powder; also, it was supposed to be sunny in the afternoon, so I figured south slopes might soften. We agreed to stick to the plan and stay with the south side approach. (I did later find out that Robert Wang had done the north side the same day and said the approach had MUCH more snow than the south side did...LOL)

Welp...in true PNW fashion the forecast was TOTALLY wrong. The day started with clouds and they never left. So much for corn. It even snowed at one point...LMAO. The road walk was quite fast though, but the south side approach was BONE DRY. We made it to almost 6,000' in trail runners before even hitting consistent snow! It wasn't inefficient to hike up in shoes...just wasn't what we were expecting.We transitioned to skis for just a brief skin across to the south facing chute below the eastern shoulder of Cashmere. The snow was still firm in the AM so we threw on crampons and just booted straight up. We weren't planning on the NE couloir, but after peering over and looking at the line we were like "OOOOH." So even with bad snow, we had to give it a shot. 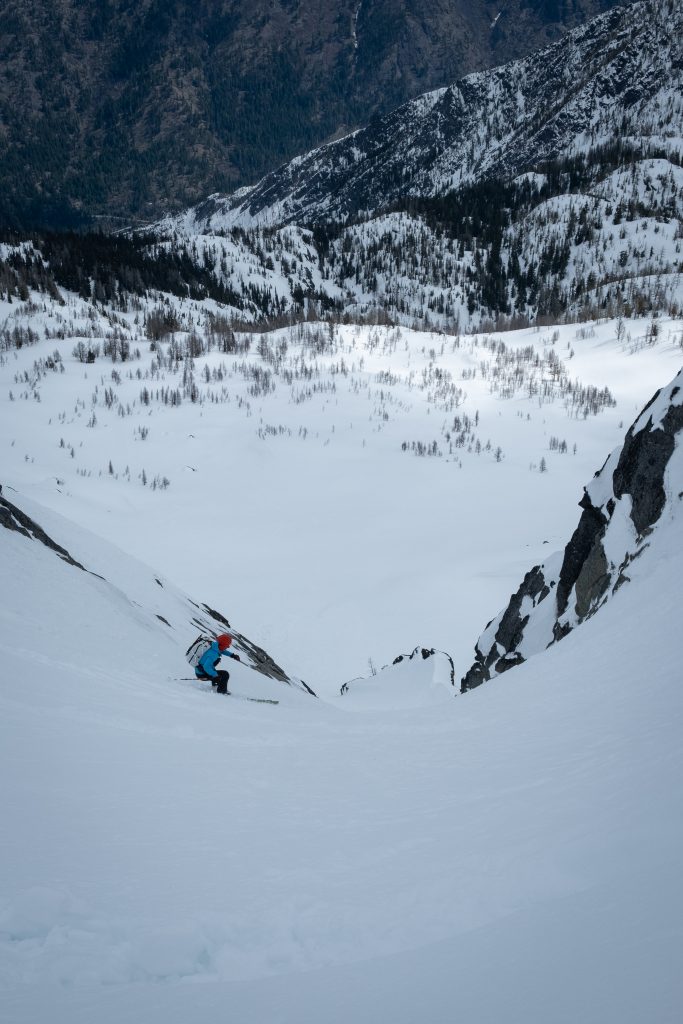 The snow was QUITE bad...the top of the line is around 45 degrees; the line felt harder given that the snow was grabby and breakable. It definitely wasn't the prettiest skiing, but we made it down. In better snow it'd be a SWEET line to open up a bit more. 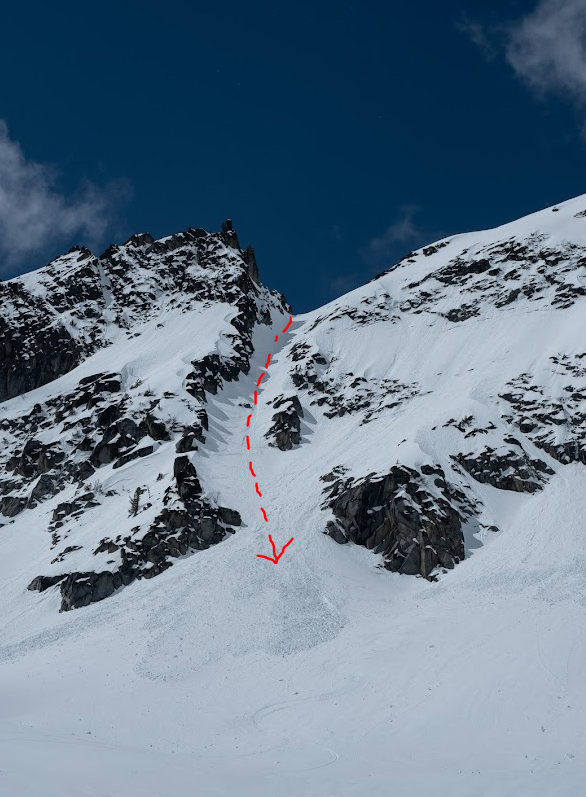 We opted to boot back up the NE Couloir because we didn't have any info on the ridge back up to the summit...but it probably does go.On the bootpack back up we were eyeing the NE Face, a much spicier line that goes at around 50-55 degrees, pretty sustained. Matt opted to give it a go, but I passed; I was concerned about the bad snow quality and making consequential turns on a steep face. Those two normally don't mix well together.

I took a lap on the south chute while Matt went for the NE Face; the snow on the south side hadn't corned up at the top, so it was still a frozen crust. Good practice for my jump turns I guess?I met back up with Matt at the col above the NE Couloir; he said that the NE Face was "spicy" and really bad snow. He measured the face at around 52 degrees, which he said was pretty sustained. A line for another day in better snow…for me at least. 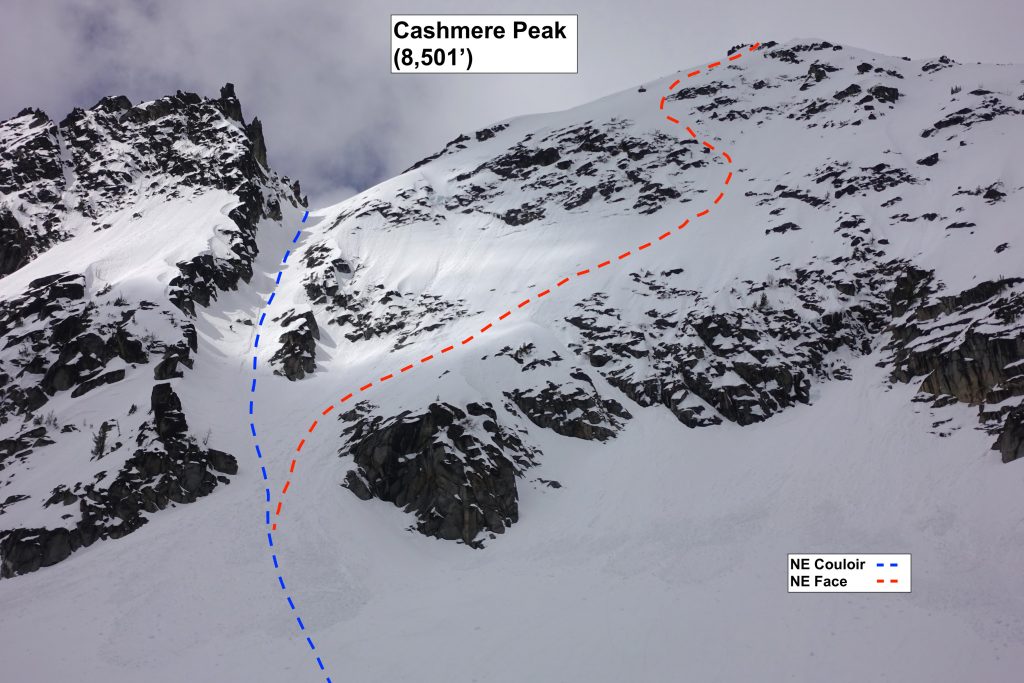 Matt's annotation of his line down the face. We skied the south chute again out to Pioneer Creek; the bottom half had turned to good corn by the time we dropped it, but the sun STILL hadn't come out. There were some shenanigans with navigating down through cliffs to get to Pioneer Creek; at one point we reached a patch of dirt that we walked down because there was no snow coverage. 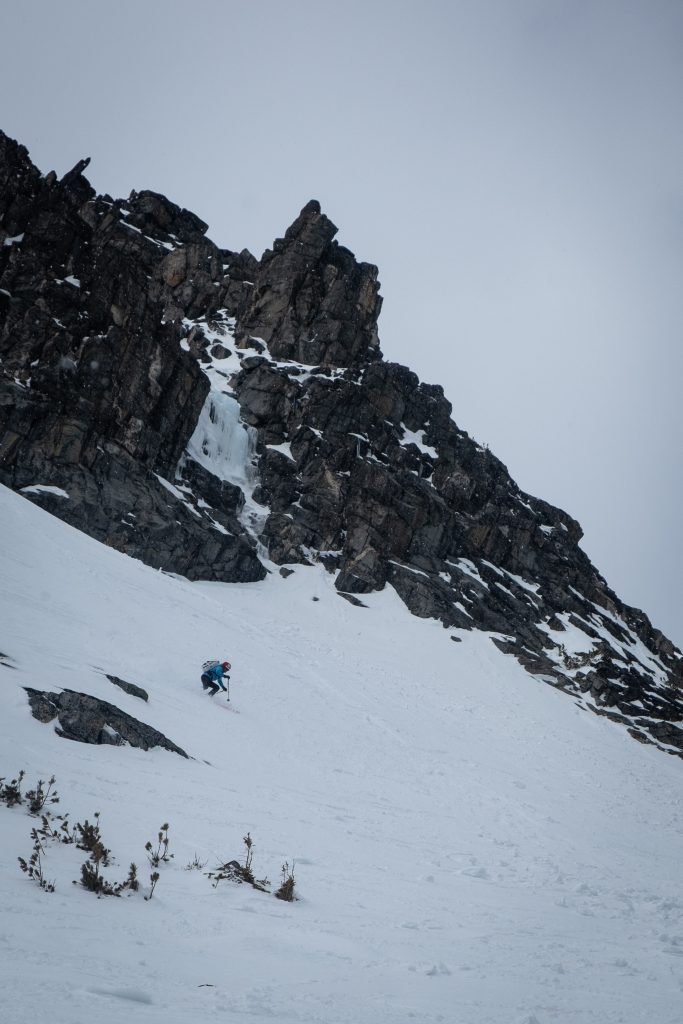 Matt making turns on the south side CHUNK.

We were able to take a high traverse back to where we had crossed over Pioneer Creek and then threw the running shoes back on and marched back down to the car. Around 11 hours on the day but we weren't moving too quickly at points. The booting on the north side was TOUGH and slow; we had brought our BillyGoat plates and used them to help with flotation.