5/5/19
WA Cascades Central E
1831
6
Posted by nordicnerd on 5/9/19 4:23am
A lurker emerges -
I have been reading TAY for a number of years and have learned a lot from all of you folks, but so far I have never posted.  This year I won the lottery for a permit to backpack in to Stuart Lake in the Enchantments Zone.  I was thinking about trying to do a ski tour into the area to scout a bit and get some turns in somewhere in there and I made plans with my buddy Eric to go on May 5th, his next available time.  As you probably know the road in from Bridge Creek CG to the Eightmile TH is closed until the 15th so were were going to have to bike up the 3.5 miles and 1600' to the TH.

Some research on TAY turned up TRs about doing this very thing, notably one by Jake the Brit, and TRs about Aasgard Pass and Dragontail Peak.  Then I thought, why not just go up Aasgard and have a look over into the Enchantments basin, and then we can ski down the Pass or maybe around Dragontail and down the Colchuck Glacier if time allows.

I went to Recycled Cycles the week before this trip to get a spoke wrench for some last minute bike tune-up and who should I run into but Jake the Brit!  Jake was also getting work done on some wheels there and we chatted a bit.  He encouraged me to post something, even if it was just a pic of my water bottle somewhere.  He also highly recommended the Dragontail circumnavigation tour and the ride back down from the TH to the gate as the finale to the trip.  It all sounded good to me!  And running into another TAY in person seemed like a good omen for this trip.
The only problem is my water bottle is a Platypus and I will not be getting that out for photo ops, so I brought a mascot instead ;-)

With the extended approach from the gate time was obviously going to be an issue so we originally planned on camping at the gate so we could get and early start.  But in the end we didn't do it that way because of other projects at home demanding our time on Saturday.  We got up at 4:30 Sunday AM, rolled out from Kenmore by 6ish and got to the gate by 9ish.  I think we were riding up road 7601 by 9:20.  At the TH about 10:45 if I recall, so it took a little over an hour to get up there.  It was already hot out by that time.  There was snow at the TH but the only snow on the road was in that last 100 yards.  We found several other groups of bikes stashed in the trees near the TH and one person returning to a bike from a climb.

To finally cut to the chase here - it was about 50-50 snow patches with nasty post holing at first in 1-2 feet of snow (where present).  It seemed like it would eventually become continuous enough for skinning and we kept going hoping for that to become true.  It never did.  It eventually reached something like 30-70 land-snow.  Once we were more than halfway we were going to get there regardless so we could at least see Colchuck Lake.  We finally got to the lake in late afternoon and ate lunch then tried to skin around the shore to get to the base of the pass.  Couldn't do it.  It became 6PM and we had to turn around.  So much for starting late!  We got back to the car at 9:20 PM in the last little bit of light you could ride by without resorting to headlamps.

We would have made it with the extra 3 hours we could have had by camping at gate.
Of course we still would have had soaked hiking shoes all day, lots of little cuts, scratches, and blisters from keeping a death grip on our, ahem, "hiking" poles all day, and sore shoulders from hauling 35-40lb packs for 10 hours.

It seems that all the snow at all elevations from 3000-5500' is melting at the same rate.  The lake itself had a cover that looked like a thin ripply snow layer floating sort of on the water, with no deeper stuff around the edges.  There is good coverage up the pass and on the glacier, but you are going to have to hump the skiis on your back right to the foot of Dragontail to reach it.  If you leave now.

So we had the Colchuck Triathlon on Sunday.  Lots of exercise in three modes but no skiing, just a bit of skinning.  But at least I finally posted something. 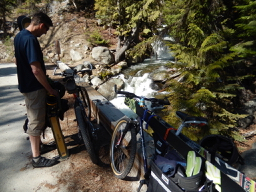 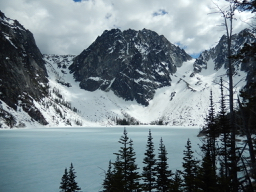 If this ever happens again, immediately turn right around and make other plans.

If this ever happens again, immediately turn right around and make other plans.