5/24/09
4781
4
Posted by John Morrow on 5/26/09 12:26pm
I've been gone from mid April through Mid May in the Utah canyons on a much needed solo vacation.  But I realized that I may actually completely miss the Spring ski season.  So when donb offered up the idea of Tower and Golden Horn with a ski approach I had to jump on it.  We traveled from opposite sides of the Cascades and met at the big pullout of Swamp Creek (signed) along the North Cascades Hwy north of Rainy Pass.  I passed 5 cars at Silver Star, 10 at the Hairpin, another full lot at Blue Lake, and 10 more at Rainy Pass but we had Swamp Creek to ourselves.
Our approach was the SW rib of Mt Hardy with an idea to begin a traverse to Methow Pass at about 6800 feet.  The first 1000 feet was booting up open forest and old burn.  With the overnight packs and very slow, deep, wet slop our approach went much slower than expected.  Once we saw that the first continuous snow across the south side of Hardy was not until 7400 feet elevation (many partially melted out steep gullies at 6800 ft.), we decided that we'd forego Tower on Monday and do Mt. Hardy with Golden Horn instead.  We dropped the packs and raced up to the top of Hardy.  Skiing was possible from the summit, albeit thin, narrow, and with running water under the snow (probably melted out by now).  The route off the top formed the beginning of a big SW couloir (photo 1).  I had to side slip 10 vertical feet of narrows but managed to descend without removing the skis!  This would be great when the Hwy first opens.  Then we traversed over to the big south snowfield (pic 2) with again deep mush that was a bit slide prone, sending off point wet growlers in the sun heated, saturated snow.
Then it was a beautiful gliding traverse to a great camp at Methow Pass.  Monday we were off at 7:30 on frozen snow with a decent freeze.  The skinning would be best with crampons.  Our final ascent of Golden Horn required a belay through a crazy vertical snow covered ledge with exposure to a fun short class 4 rock move that we had tennis shoes for and glad to not have to try with ski boots.  The entire climb was probably 30-40 feet and was set up for the short rappel back to safe ground.
The ski from 8000 feet on the big SW slope of Golden Horn to 7000 feet was perfect corn at about 11:30AM (picture 3).  Below that to the meadows at 6500 feet was already beginning to lose its supportiveness and glop out.
After packing up camp we began a highly laborsome exit, first descending on skis through more glop down the fall line below Methow Pass.  Then we ran out of snow, then back on with the skis through the near flat and quite densely forested creek bottom of Swamp Creek.  It took awhile longer than we hoped to get through all that and reach the cars.  Still have to return to Tower Mtn. sometime but a great trip indeed.   I was appreciative to get the skis back on at least one more time this season after the desert hiatus. 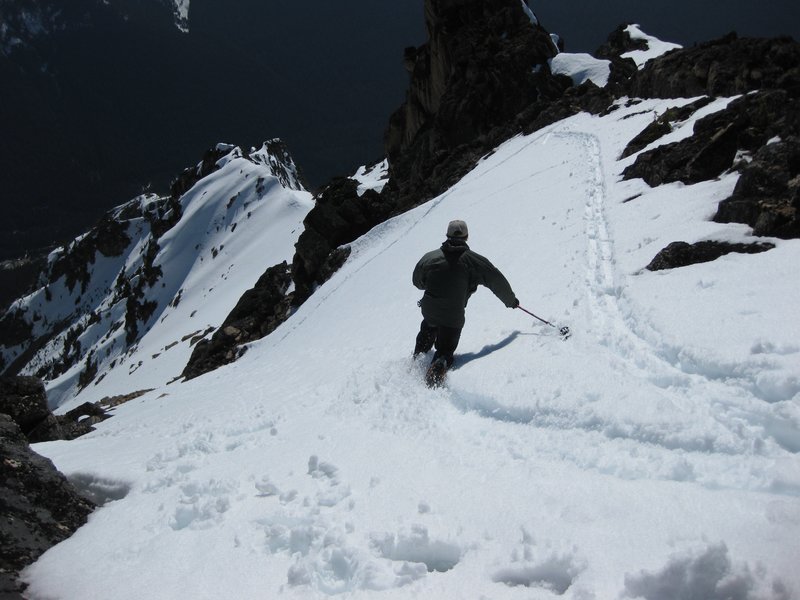 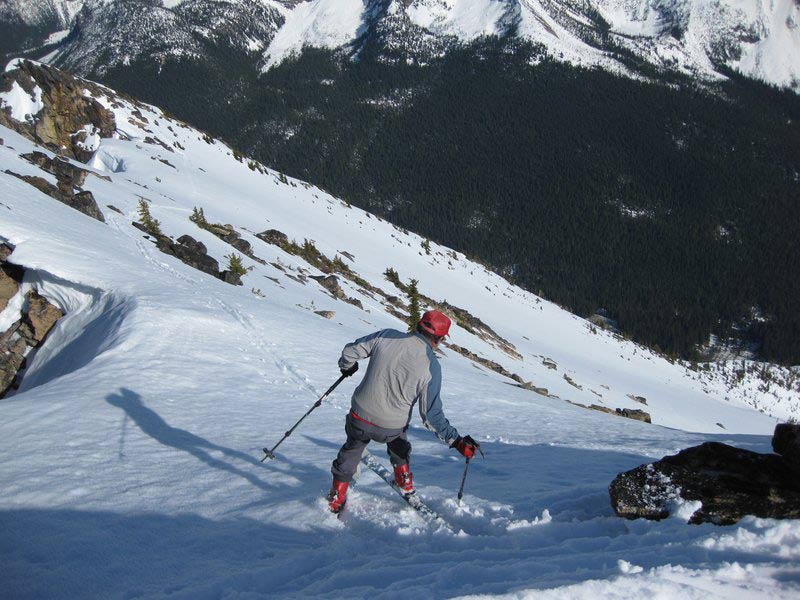 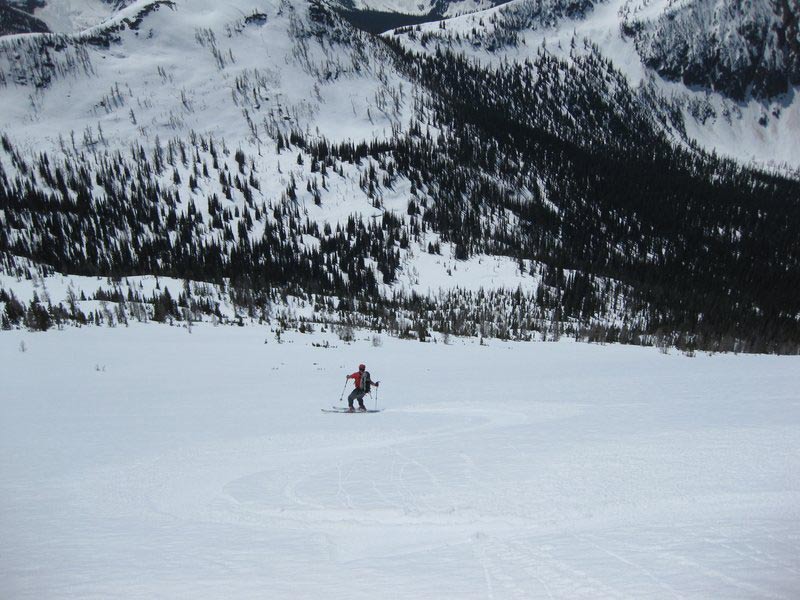 5/27/09 7:38am
stugie
Nice weather and great looking turns!  Hope Utah was a blast!
5/28/09 3:39am
big-steve
Yeah baby, way to slay the glop!
5/28/09 6:50am
jcocci
Very nice! I was up on Cot Throat Ridge for the weekend with the wife and some friends and we were admiring the snowfield on Golden Horn and how sweet it looked. Was wondering what the hike in there would be like. Want to get out to Tower sometime as well, cool looking peak.
5/28/09 11:29am
john-morrow

author=jcocci link=topic=13453.msg56124#msg56124 date=1243544479]
Very nice! I was up on Cot Throat Ridge for the weekend with the wife and some friends and we were admiring the snowfield on Golden Horn and how sweet it looked. Was wondering what the hike in there would be like. Want to get out to Tower sometime as well, cool looking peak.

jcocci, I think with a high approach on Hardy and return the same way it can definitely be done in a long day.  Probably do it again that way some Spring in the future myself.  There were recent tracks that looked like a solo individual did just that in fact.
J