5/18/19
1706
4
Posted by voyageur on 5/20/19 5:02am
Saturday I had a nice day out on Mt Baker with Porter. We started a little after 6 and hiked the trail to the Hogsback, and continued in shoes until around 6.8k, then skied a firm crust to the base of the ridge. Almost a foot of fresh snow on the ridge made travel slow, but visibility was good. At the ice step, we took a climber's right weakness and had just a few spicy moves (well, maybe just for me – Porter crushed it solo). The wind kicked up from the ice step onward, so we didn't take much of a break until we finished the Park descent. A ski pole belay confirmed the crest of the Park headwall was not corniced, and conditions looked decent enough to do the direct descent. Porter led this and negotiated us around the bergshrund and some seracs. We met 3 nice fellas who'd skinned from the resort at around 9.5k – strong work! – and used their skin track as a reference on the way out.

Conditions were windblown powder with sections of rime-ice above ~9.5k, breakable crust to around 8k, then smooth, fast corn below. The crust was real fun when it railroaded you toward crevasses, but the corn afterward more than made up for it.

The traverse out was as long and hot as I'd remembered, and the snow was mush, but we kept a good pace and covered ourselves from the sun. Skiing is still right to the car, and will be for quite a while. In fact, I didn't see any reason why the whole route wouldn't be in for a good while yet.

Pics:
1. Porter above the ice step
2. dropping in to the Park
3. Baker viewed from the Portals 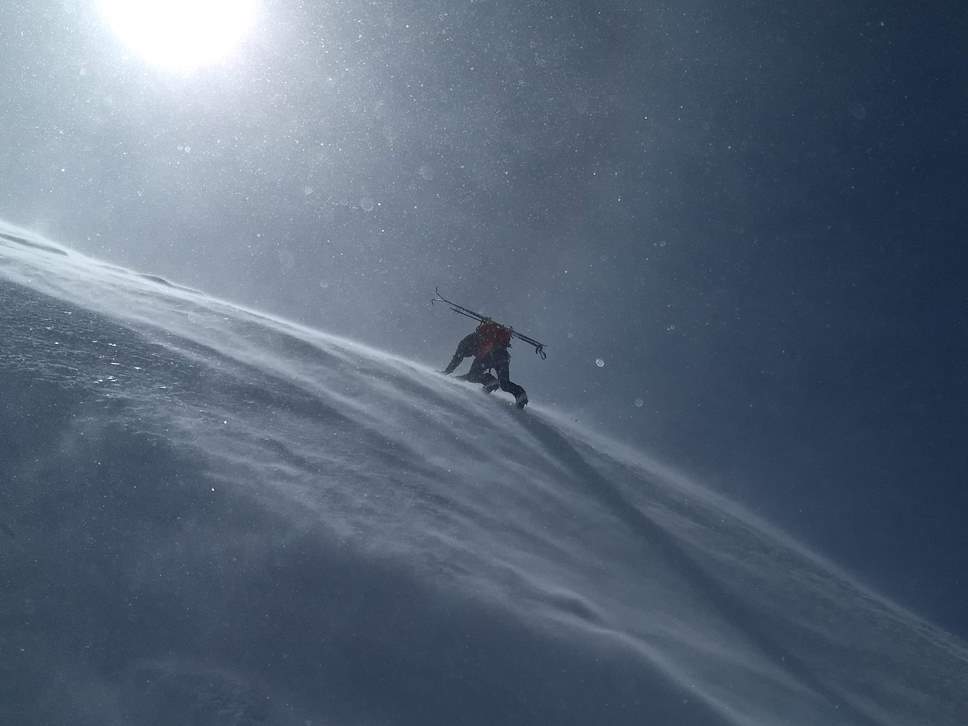 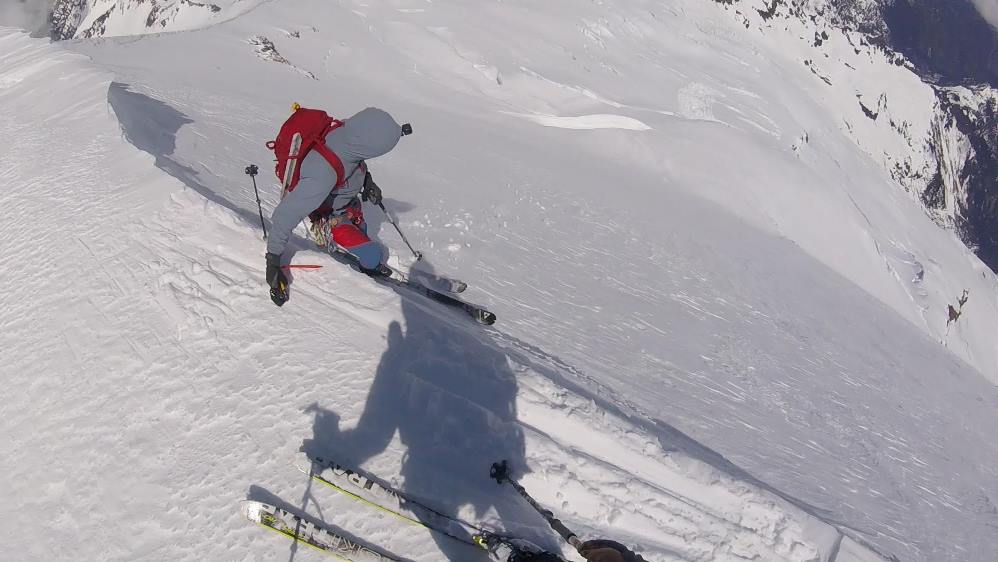 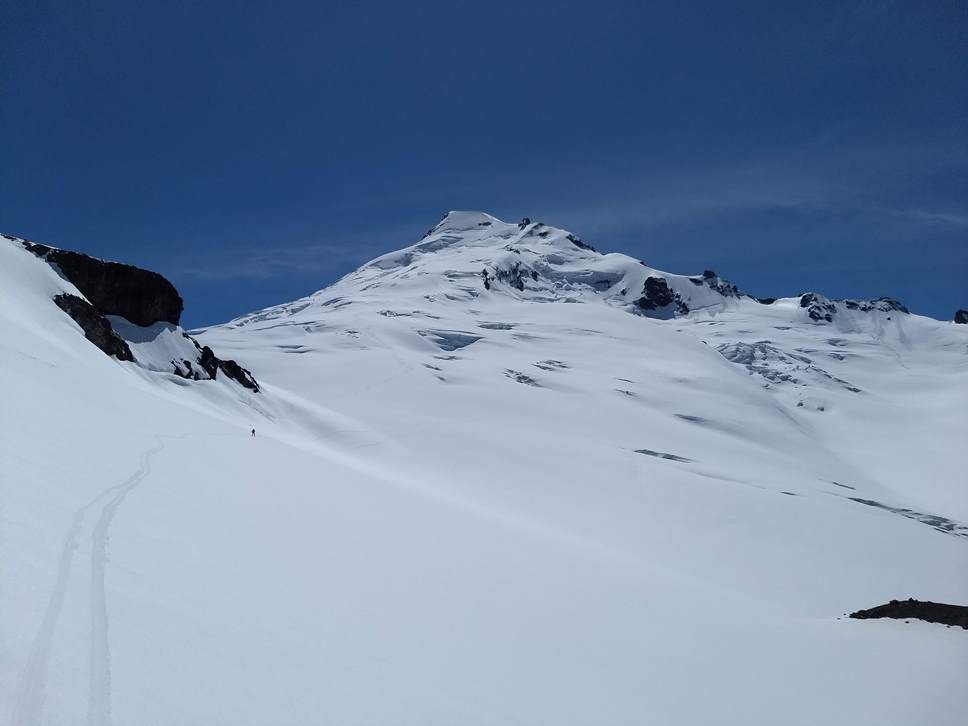 5/30/19 6:44am
aaasen
Awesome! Makes me want to go back to ski the Park Headwall this season. Maybe exiting by traversing the Mazama Glacier and the Roosevelt Glacier back to the base of the N Ridge to avoid the long traverse out to the ski area and the car shuttle.
2019-05-30 06:44:54
aaasen
5/31/19 11:31am
voyageur
Thanks!  Yes, seemed like it would be in good shape for a while still so you'll have the opportunity.

I'd love to do a day from Heliotrope>Roman Wall>Park Glacier>Hadley Pk>Skyline Divide.  If that interests you, you have my number!
2019-05-31 11:31:48
voyageur
5/31/19 8:02pm
peteyboy
What an awesome giv'er on such an amazing route!  I've always wanted to connect Skyline over Hadley to Coleman Pinnacle to Heather Meadows but from the summit of Baker last week, it sure looked green to a high bathtub ring around the whole Hadley zone.  You think it would still go?
2019-05-31 20:02:08
peteyboy
6/1/19 6:05pm
voyageur
I took a look a few times on Saturday and it looked like it would be skiable still, though hard to say for how much longer. The road access is a question.  The FS has not updated their status for it since the beginning of the month.  I'd think the road is melted out fully, but timber blockage may be the bigger concern.

If you're interested in giving it a go soon, shoot me a PM.  Logistically the CD to summit to Skyline might be a bit simpler thoughâ€¦

My two best pics of that area from Saturday: 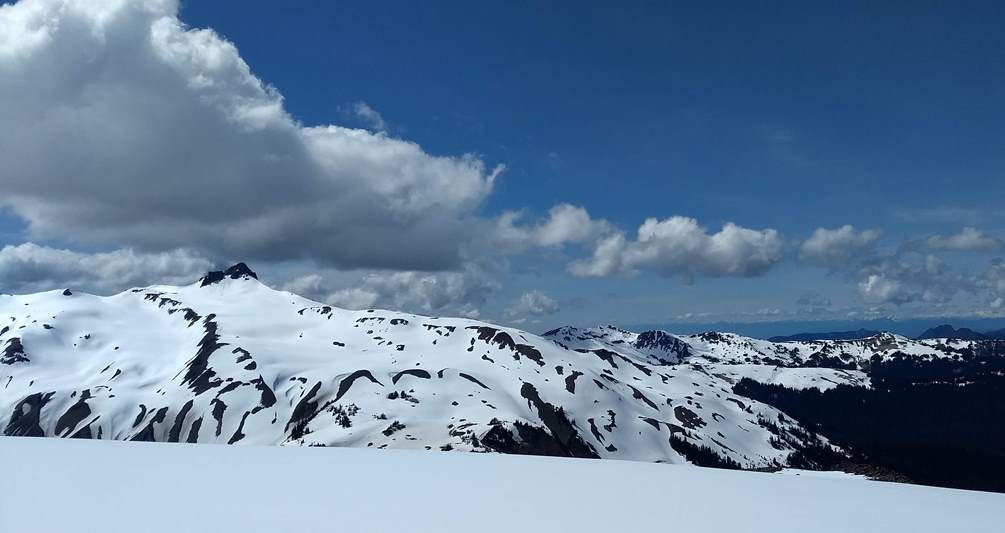 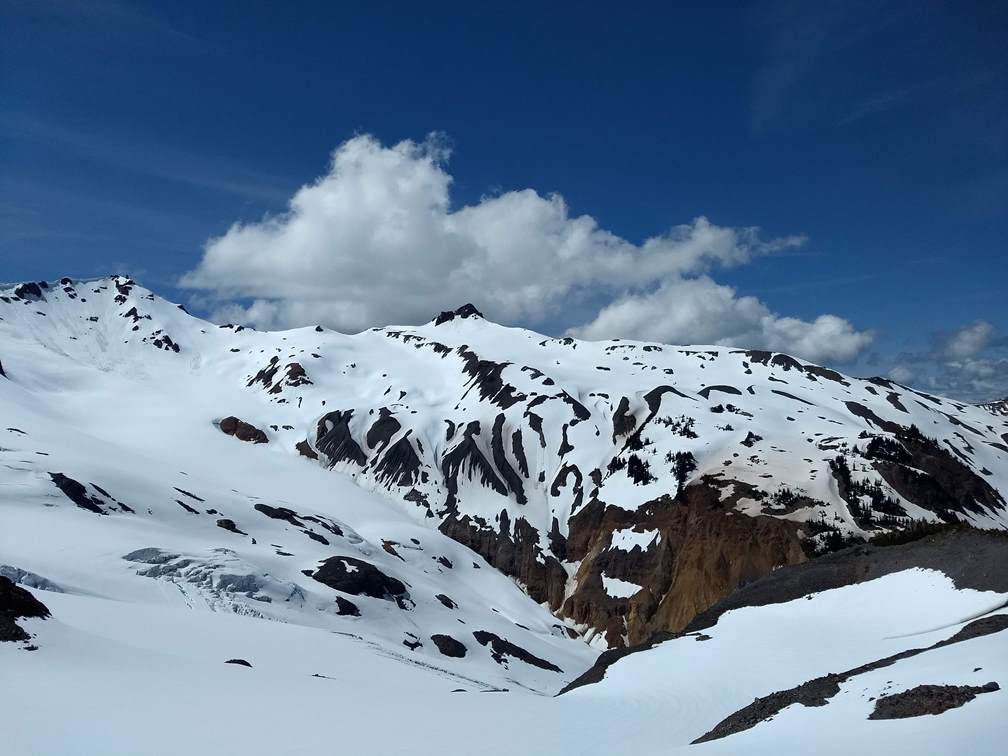