Living in the mid-Willamette Valley usually means driving minimum 1:30 eastwards for actual skiing. (That sounds like heaven to my Texas upbringing, and it pretty much still is, but it still means that, for the most part, skiing and working must happen on separate days). The Coast Range is mainly a low-elevation rainforest. But the highest point of the range, Marys Peak, at a whopping 4098ft/1249m, does get snow, and there isn't much to speak of in terms of avalanche terrain (at least that gets snow). The road isn't maintained by the forest service in the winter, but enough people drive up it for the snow it does receive that it's passable if you have at least one of chains, traction tires, AWD/4WD, or a bit of luck. (You might end up getting stuck behind someone who doesn't have those things, though). I read that a rope tow existed on the mountain back in the 1940s, in the earlier stages of our rapidly changing climate. I've also seen a picture of the considerable snowpack on it in (assumedly) a high snow year from the early 1900s. Nowadays, though, the conditions are variable. When the conditions are right, you have to take advantage. For example, during the high-pressure period in January that caused the current crust causing PWL mayhem up in WA right now, I hiked it with some friends. Temps were around freezing, but there was zero snow. Nada. Bone dry. When moisture finally returned, I figured it might start getting good (I mean, I saw a video of somebody skiing in Ventura County, CA after that storm, so I figured we had to get something up here, too). I'd been up a couple times this year since then (and one additional failed attempt due to downed trees blocking the road from an ice storm), and the snow was okay to good, but both times I got unexpectedly rained on to the point of wet-out.

On Sunday I checked mountain-forecast.com (weather.gov doesn't even have a forecast for that elevation since the land area at that elevation is so small, basically just the peak) and it looked like Wednesday afternoon was maybe going to be a good weather window - clear skies and calm winds. I decided I'd hightail it out of town after my last midafternoon meeting to catch a couple hours of turns. I had no idea what the snow conditions would be like, so I figured in the worst case I'd get to hang out in the sun. Coincidentally, Wednesday ended up being one of the most frustrating workdays I'd had in years, so the chance to cut it short and go skiing certainly made things right.

On the drive up I knew it was gonna be good. I could see a fresh coating on the hemlock branches and a dusting on the road surface that looked recent. Temps at the summit were around freezing and completely bluebird with no to very slight wind, as predicted. Silent and gorgeous. A clear day on which you could see all the way down to Mt. Bailey in the south and just barely make out Mt. Rainier to the north, along with everything in between. You could also see the Pacific Ocean to the west. Probably one of the few places in the US you can ski in view of the Pacific Crest and the Pacific Ocean at the same time (maybe Olympics? Some places in CA after a cold storm?).

There are some parts that are barren, near the summit there is some rime, and the grasses poke through the snowpack in some places, but there certainly exist lines to be had. The main summit and secondary summit both had a windswept layer of breakable melt/freeze crust and/or ice, and in the trees was mostly ice, but other slopes had up to 6 inches of powder on top of a breakable melt/freeze + rain crust. My probe test while skinning around 3800 feet on a west-facing, non-wind-affected slope showed a base just shy of 50cm. Skiing quality was smooth and buttery but fast and supportable. I ripped it on the way down, loudly, and I don't think anyone was even around to hear me yell. (I also ate it near the bottom at one point - glad nobody saw that). I did a couple laps off the main summit to the backside then swung back around to the front side once the sun angle and temp started to drop further and enjoyed some soft shaded powder next to the forest. There were a few snowshoers heading up to catch the sunset.

I watched the alpenglow fade on Mt. Jefferson as I did another couple laps on the frontside down past the parking lot. I skinned back up to the car under a full moon with a blister developing (new boots...) and tired legs but a rejuvenated mind. Sure, the Cascades are cool, but the coast range can be, too. And you can make it home in time for dinner. 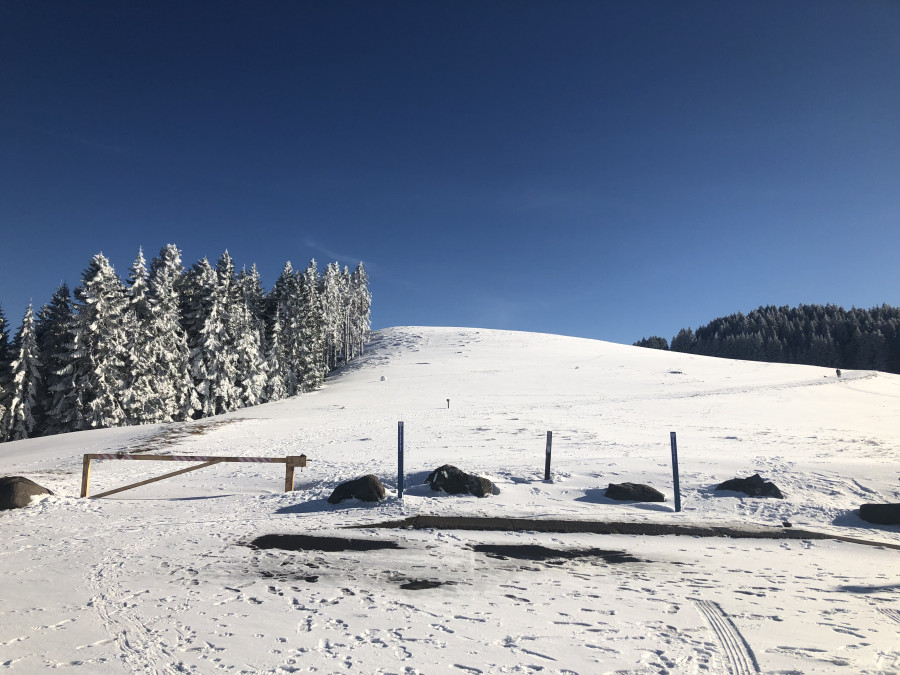 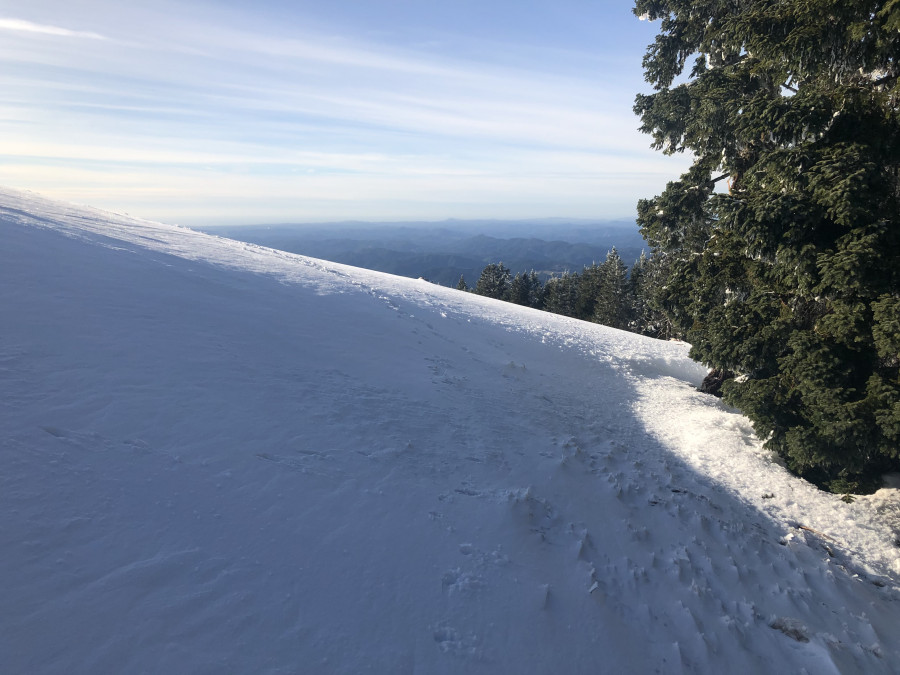 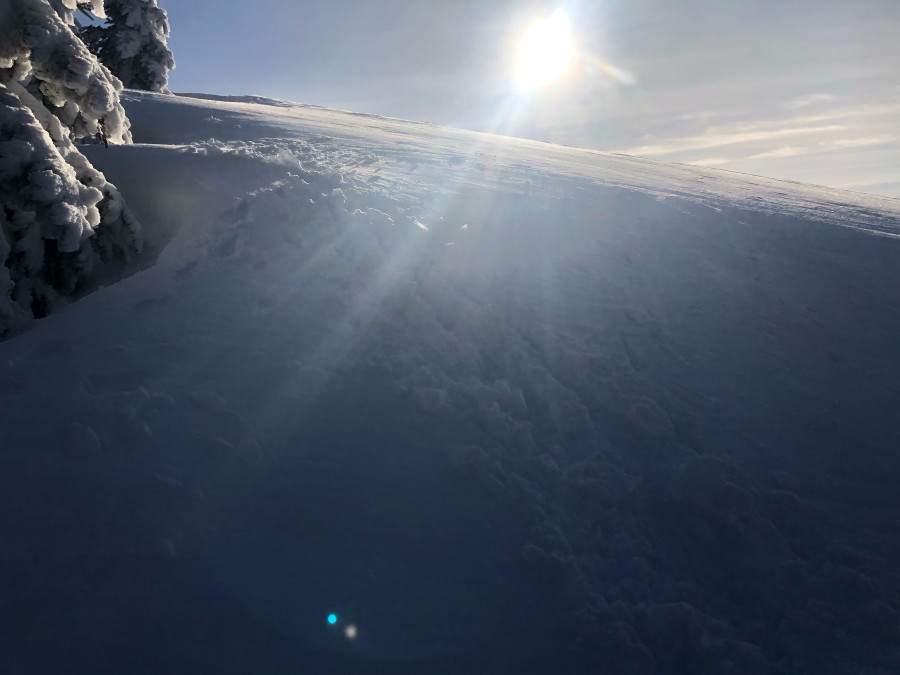 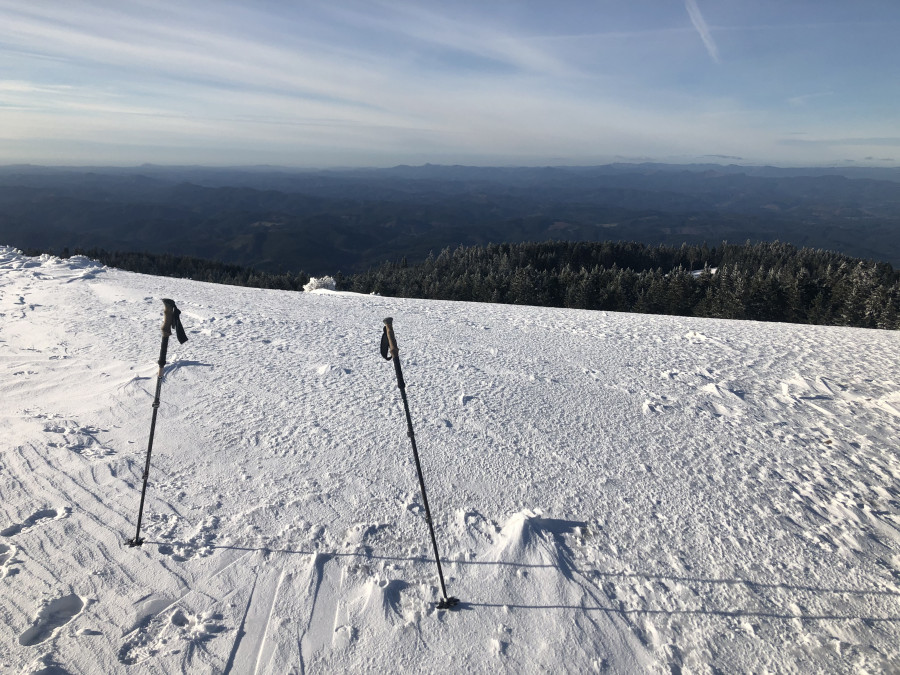 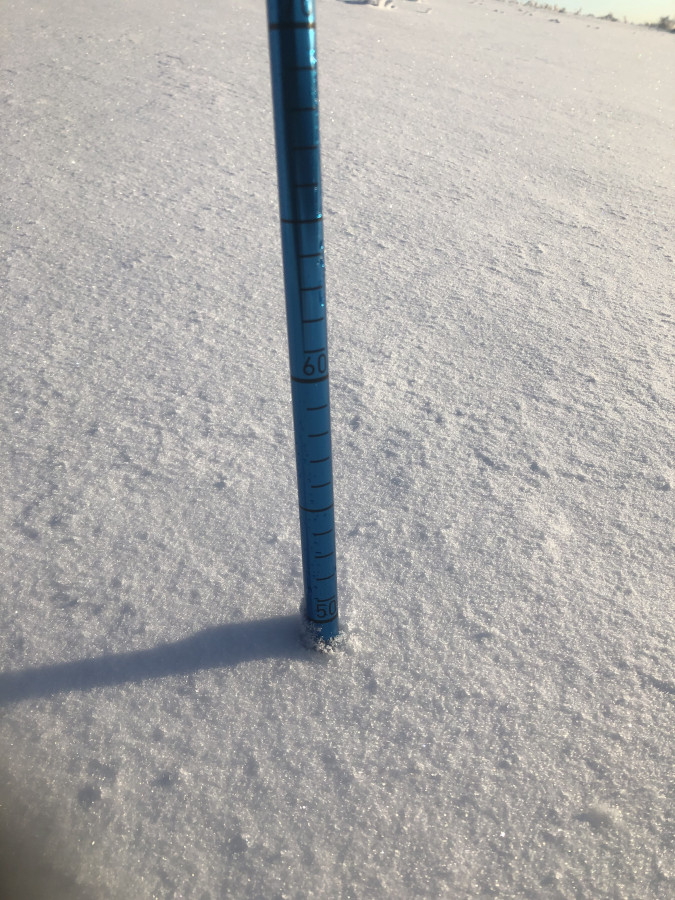 Jefferson on the horizon 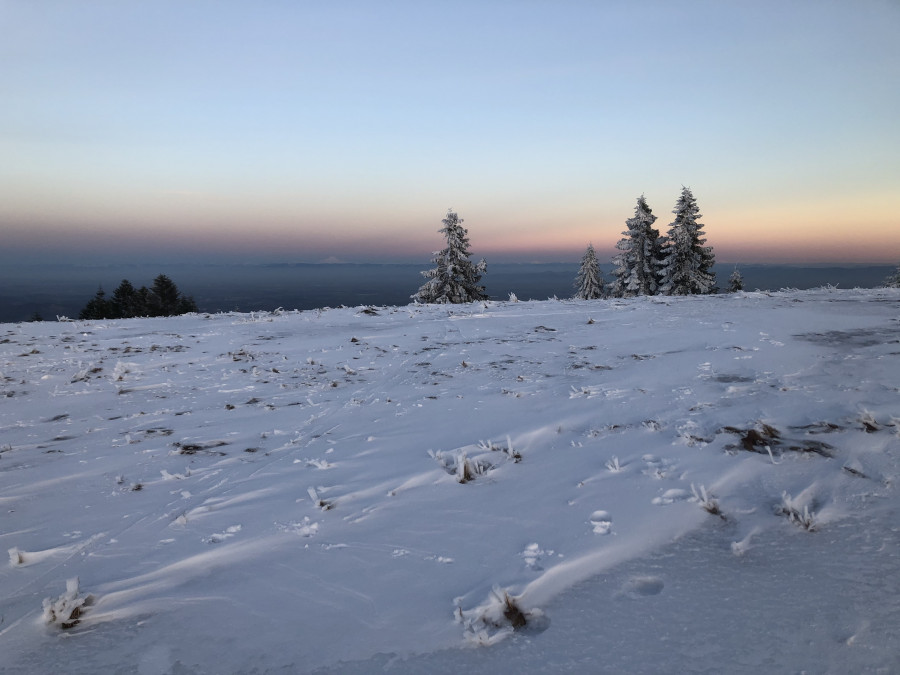 Secondary "summit" on the frontside 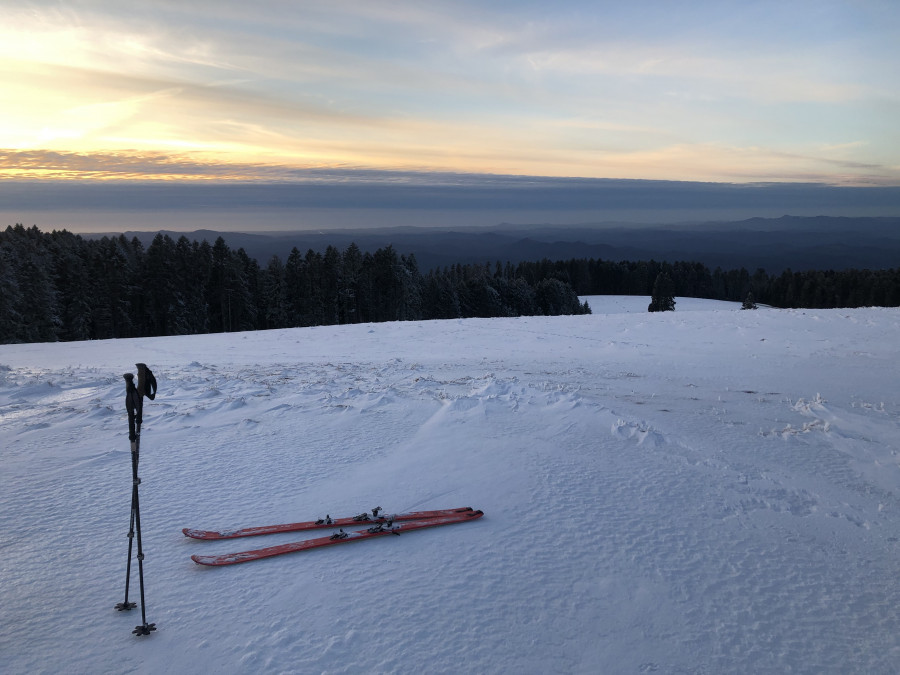 Down in the pow in the forest 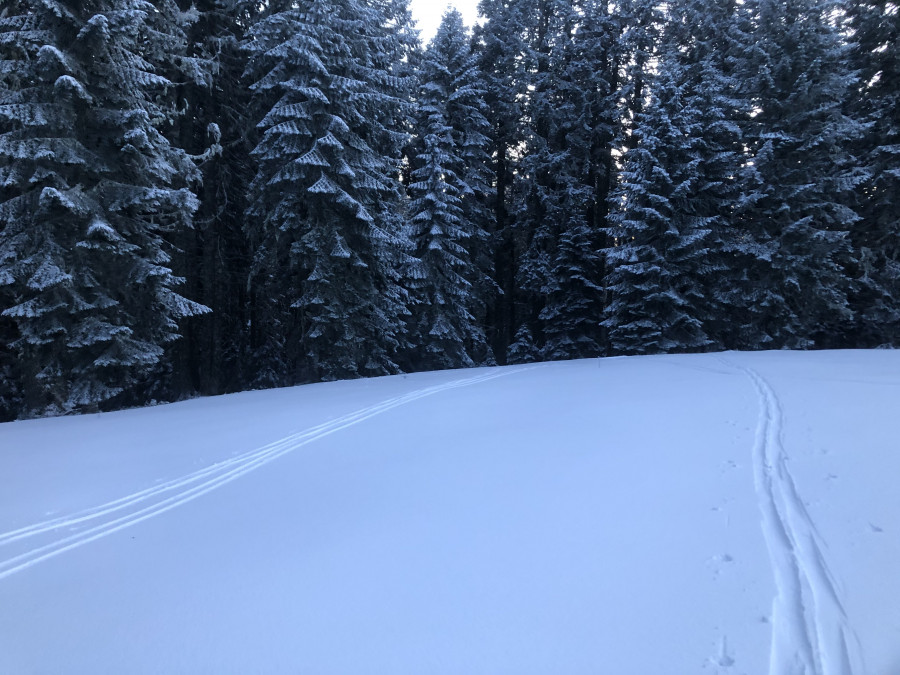 Welcome mpmp. Your photos and writing really capture the magic of the place.

Thanks for sharing - that looks really nice, and reminds me of some mountain ranges in Slovakia.