Cascade River Road was gated at MP 20 (Eldorado Trailhead parking lot). Anthony opted to bring his bike and hike it up to the Cascade Pass TH at MP 23, while Nick and I opted to just walk and suffer the consequences of walking the 3 miles back down. The sky was surprisingly clear when we woke up and we kind of wished we had gotten an earlier start...oh well.

It took us ~45 minutes to hike the road to the Cascade Pass TH at MP 23, where we started up the trail. The trail was dry for the first 2.5 miles from the TH up to the pass, and once we 'hit snow' it was still just patchy. We were able to hike the trail all the way to Cascade Pass, although we could spot a snow finger that was tempting us to try and ski on our way back down. It looked discontinuous and bushy, but it might be skiing! We'll come back to that later...

We stashed our trail runners at the pass and threw on boots. We didn't skin but rather opted to boot on the initial climb up the shoulder of Mixup Peak. The snow was supportable and honestly skinning would saturate our climbing skins quickly, we feared. Anthony and Nick had packed an extra pair of climbing skins, fearing wet snow would likely lead to skin glue failure. The more we could boot, the more we could preserve our climbing skins for later. We were able to ski traverse from the shoulder above Cascade Pass around Mixup towards the flat climb to Cache Col. There was some intermittent booting here and there to get over some roll-overs, but before long we were on the flat Cache Glacier, climbing up in the shade towards Cache Col. The 'Cache Blob', the infamous giant cornice that hangs over the col, wasn't gigantic this year, maybe 5 feet overhanging. We did some loose rock scrambling to get up to Cache Col, where we got our first views of Formidable, Arts Knoll, and Spider Mountain. 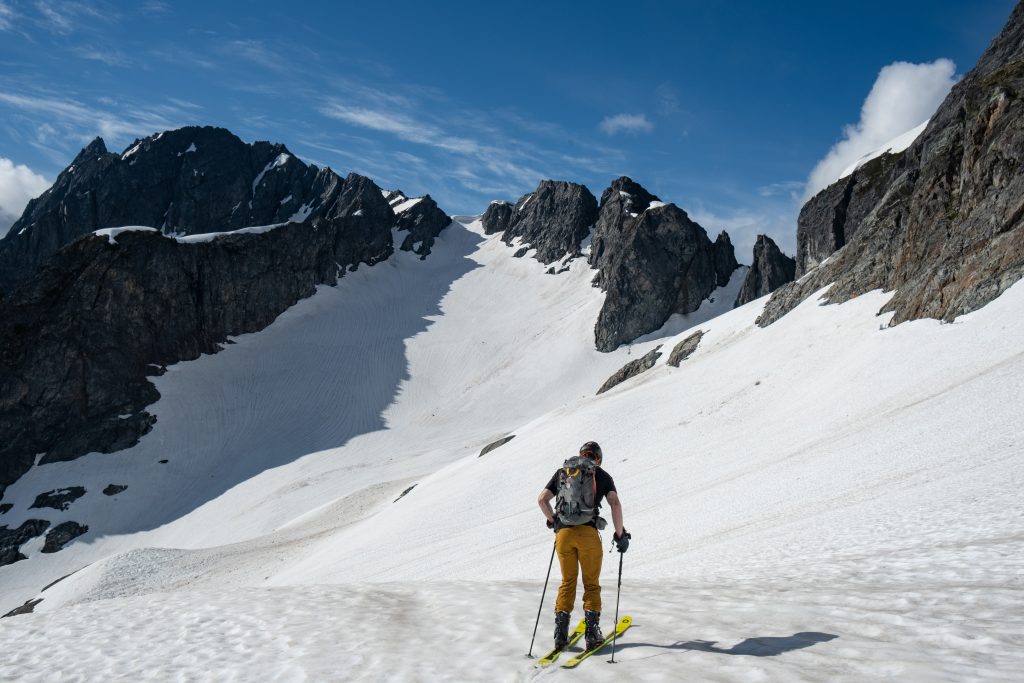 We ski traversed down towards Kool-Aid Lakes from Cache Col, where we transitioned to skins and realized total skin failure. Anthony carried his skis in his arms in desperation, looking like a sad man...

Anthony skiing down towards Kool-Aid Lakes.

Anthony with skis in hand. The flat skin up from Kool-Aid Lake towards Arts Knoll went quickly and we found running water in spots to fill up. In Marblemount Anthony had acquired a large rock from a gas station attendant that had a smiley face drawn on it, and I was so fortunate to find said rock in my pack at Arts Knoll. LOL. 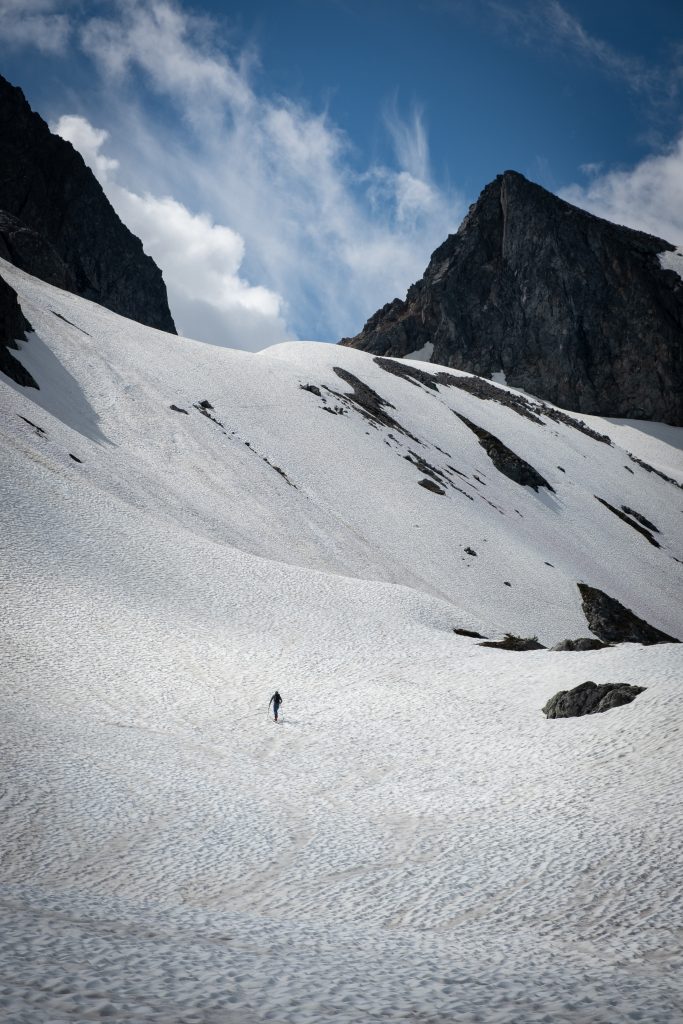 Nick skinning up towards Arts Knoll. 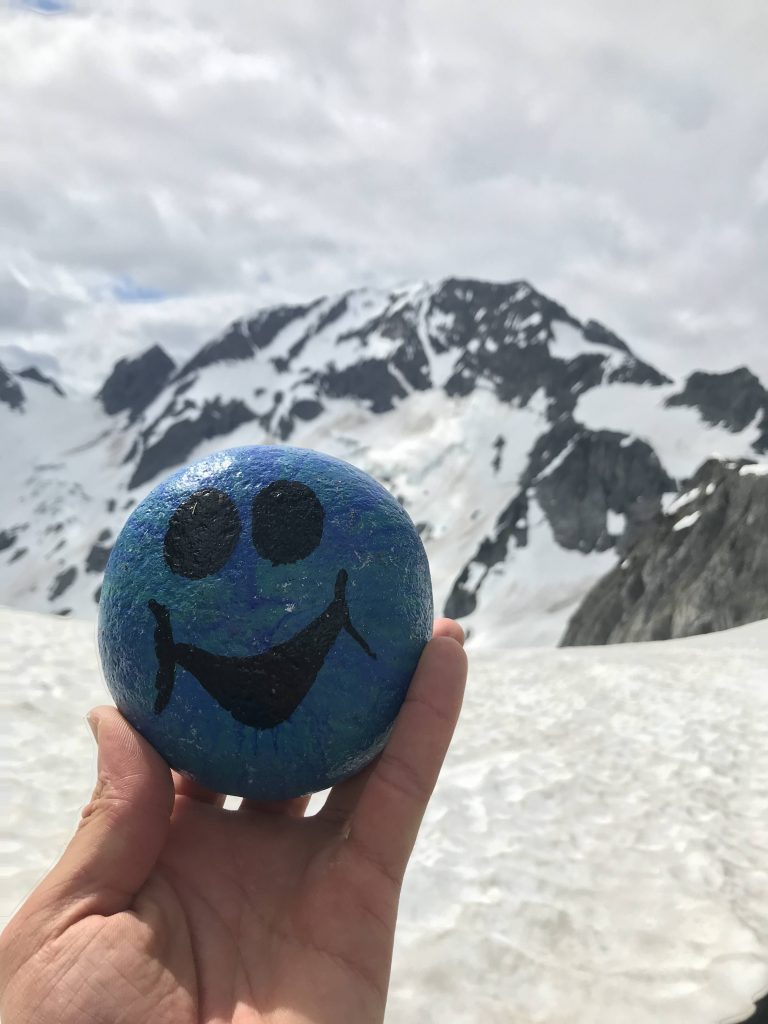 So glad to have found a large rock in my pack.

We ski traversed from Arts Knoll skier's left towards the base of the Plan B Couloir, the passageway to the top of the S Glacier. Our initial plan was to climb and then ski back down Plan B, then re-climb back up. It's an interesting 40-45 degree couloir, S/SW facing, for ~1,200'. Sadly, there was a huge runnel in it and a few sections where moats were starting to form. Given the heat of the day and the poor refreeze, we didn't really think it made sense to ski it, so we opted to just climb up and prioritize our north facing descents to come. It was a HOT climb and I was sure glad I didn't have to go back up it! 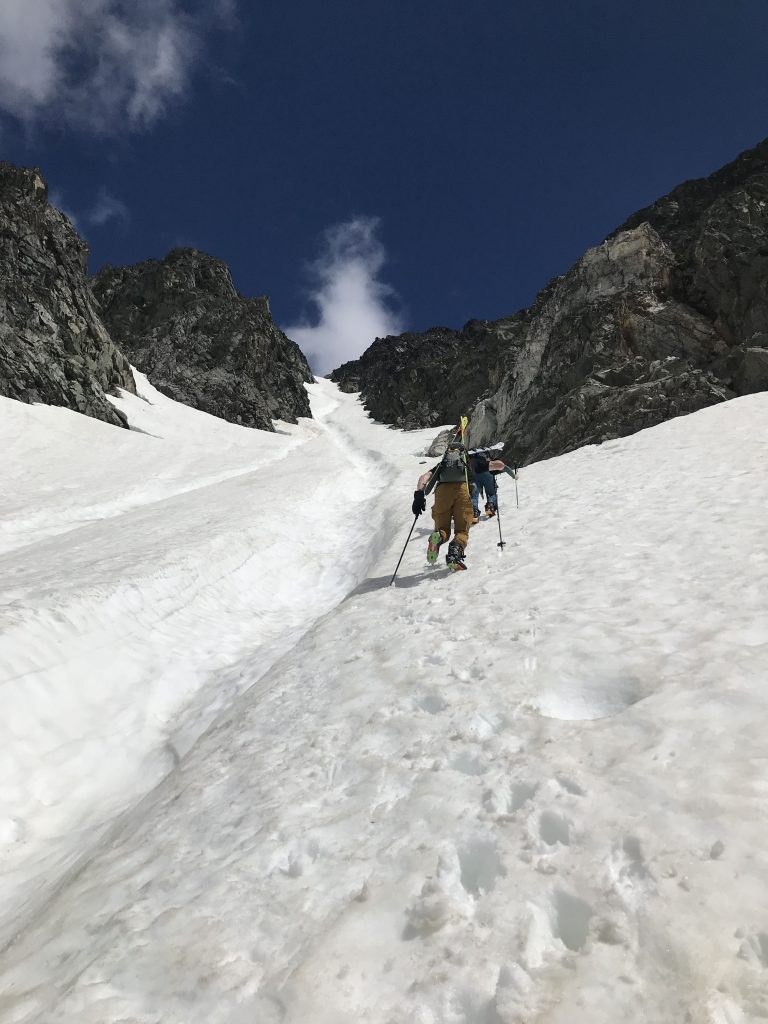 Climbing up the Plan B couloir. At the top of the climb out of Plan B we hiked over to Hurry-Up Peak for a quick snack and water break, enjoying the views of Trapper Lake and our descent down the S-Glacier to come soon. The descent down the S-Glacier starts with a roll-over of around 40 degrees, which mellows out to 35-40 degrees sustained for a few thousand feet. I wanted to get a picture of Nick skiing the roll with the huge terrain behind him...he looked so small in comparison. 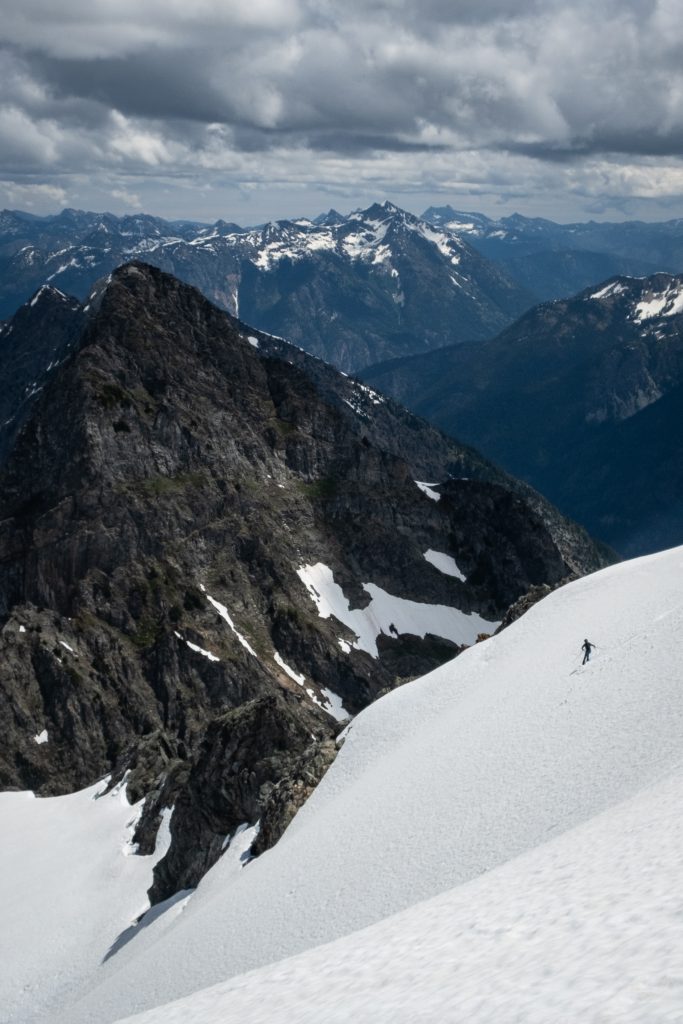 Nick skiing the top roll of the S Glacier. We skied the S-Glacier relatively quickly, as there was overhead hazard that was warming in the heat of the day. Once we were past the roll-over, we skied skier's right down towards a 'couloir' that would lead us down towards Trapper Lake. The 'couloir' is the passage through rock slabs and other terrain features that don't quite 'go' in the late spring/summer. It's easy to spot from above, as it looks like a large 'V' from above. 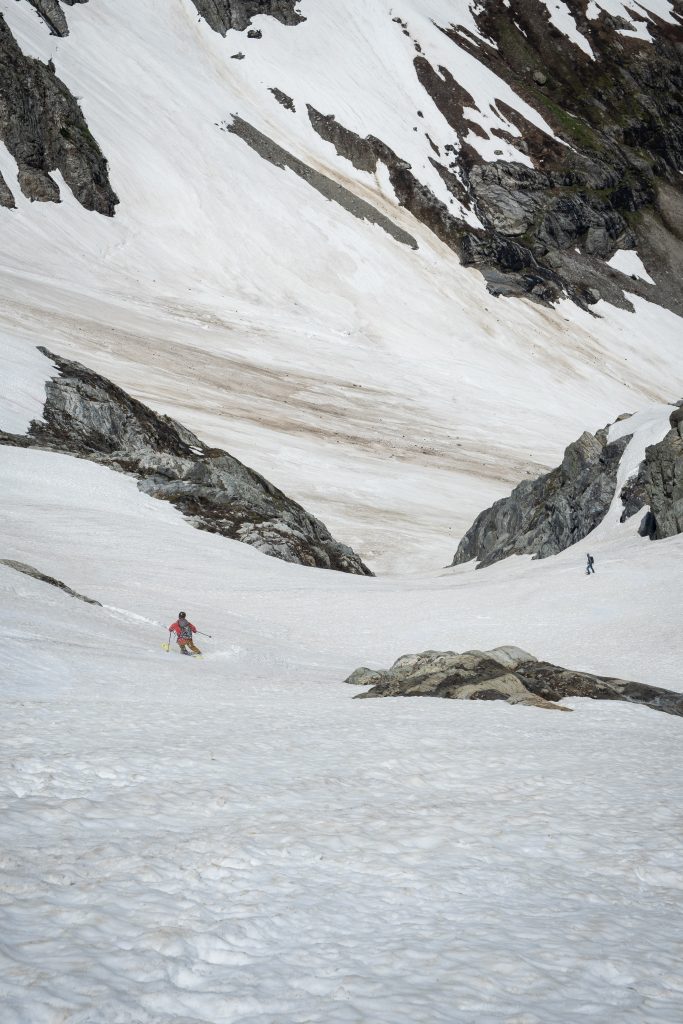 Anthony skiing into the couloir. 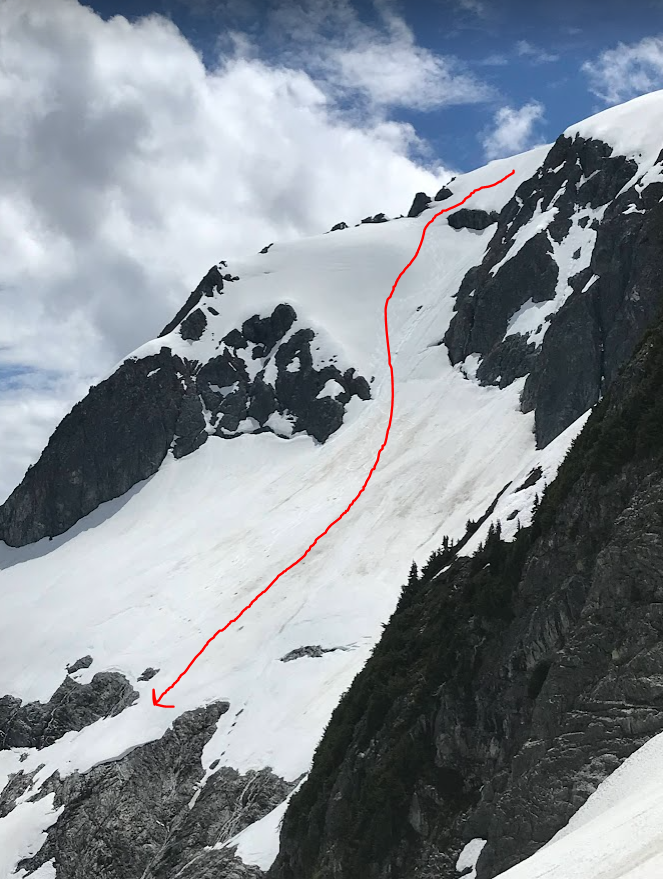 Looking back at the descent down the S Glacier. Once through we skied towards a rock slab that had some running water to fill up, one last time. We had 1,100' from there to Alliteration Col, between Magic Mountain and Pelton Peak (thus the alliteration). Again, we just opted to boot, as our skins were failing and the booting was easy. Very little ski 'touring' on this trip and more hiking with skis.

We reached Alliteration Col around 1:30 PM. One thing we noticed through the whole day is almost all the upper ridgelines had already shed their cornice and snowpack. It was nice knowing there wasn't much overhead hazard to deal with. We party-skied the Yawning Glacier down towards Pelton Lake and tried to avoid stopping, which made for a real leg-burner of a descent. The suncups were just large enough to bump us around here and there, activating our quads even more. Throughout the day we had entertained the idea of adding on a descent of Sahale at the end of the day, but given the time (now 2 PM) and the snow (total mush) and our skins (absolutely failing), it just didn't make sense.

We made the final climb up to Cascade Pass with our failing skins, which just held on long enough. Anthony had dropped his jacket at the beginning of the day on the trail, so he opted to hike down the trail to try and find it. I, being the greedy SOB I am, wanted to try and milk some final turns down to the trailhead, and for better or worse Nick agreed to come with me. We had seen that there was an upper snowfield above the waterfalls that led to some bushes that we thought we could meander our way through to connect to the lower snowfield that went most of the way down to the parking lot. There was still the open question of how we could cross the river and get to the parking lot, but that didn't really stick out in my brain.

The upper snowfield went fine, until we realized we had gone a bit too far down and needed to climb up and towards the east to get closer to the waterfall. We pushed and shoved our way through alders, and for a second it didn't look like it would go. We ended up finding a weakness near the waterfall that we could 'veggie-belay' ourselves down.

We reached a snow finger that led us down to the lower snowfield. 30 minutes of 'shwacking and we were skiing again! !-- wp:video {"id":6252,"src":"https://engineeredforadventure.com/wp-content/uploads/2022/07/IMG_5561-1.mov","align":"center"} --> We skied most of the way down to the parking lot, within 0.25 miles of it on a topo map. Now came the interesting part...how the hell to get the last 0.25 miles. It was BAD...there was vertical suspension in alders at times. We regretted our decisions. I have no good beta other than maybe follow the river down further than we did. It was real bad. It took us 45 minutes to push 0.25 miles through bush.

Anthony ended up beating us to the trailhead and his bike was already gone. A day that had been so easy and no shenanigans now had shenanigans. Hell...we had even talked about how there was no BS on this route! Well, we managed to find it, totally unnecessarily. 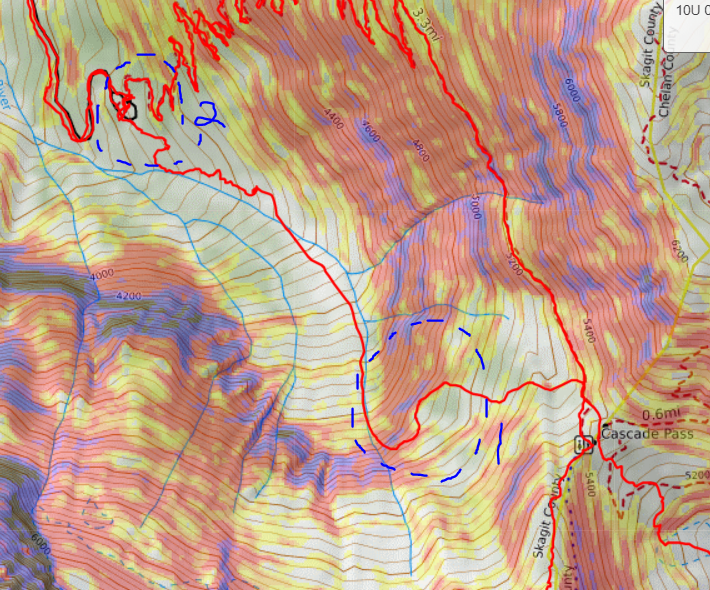 The first set of shenanigans marked in 1. The second set marked in 2. #2 was much worse. Nick jogged down the road while I walked, listening to a podcast and trying to eliminate the last hour from my memory. I was slightly bummed because the mood of the day had been so light and casual, and this beatdown ending kind of felt like a sour taste. Well, that's how the North Cascades go sometimes. All in all, the Magic S Loop is awesome. Doing it earlier in the season when you can skin from the Cascade Pass trailhead to Cascade Pass would make travel easier. We did it in round-trip 11.5 hours but feel it can definitely be done in 10 hours with no bushwhacking.